Trip Type: Paddling Canoe
Entry Date: 08/12/2016
Entry & Exit Point: Saganaga Lake (EP 55)
Number of Days: 5
Group Size: 2
Discuss Trip: View Discussion Thread (26 messages)
Part 2 of 7
We both slept somewhat fitfully before rising at 6 AM. Grandpa showered while I loaded up the trailer with all our gear and met Dan (aka Kiporby on this message board) who was working for Seagull Outfitters. After that, I cleaned up and re-bandaged Grandpa’s recovering wound from skin cancer surgery. He had gone “under the knife” (as he puts it) only two weeks prior, but his doctor gave him the okay to come on this trip with me as long as he didn’t put his head under the water, a command which he faithfully obeyed on this trip.

After a quick breakfast, we were on our way to 81 Landing on the Saganaga Channel. Kevin soon pulled up with the tow boat and we headed off for American Point. This was my second time using a tow boat. Under ordinary circumstances, I wouldn’t have used a tow boat, but with Grandpa at seventy-five years old now and looking at a six hour paddle from the landing to our campsite, it made sense to get a tow. I don’t regret that decision. I hope all of those who for various reasons may look unfavorably on tow boats would consider the ways that a tow boat can open areas of the wilderness to people who otherwise would experience great difficulty getting there.

We were paddling by about 7:20 AM and headed for the site I had in mind on the second bay of Saganaga. The wind was at our back, which made for a fairly easy paddle. Grandpa and I had packed pretty heavy since we weren’t planning to portage our gear, so our canoe rode pretty low in the water. I was glad that we were paddling with the waves and not against them for that reason. Grandpa is still a strong paddler. He always prefers to take the stern of the canoe, with me in the bow. One of the things I love about Grandpa is that he doesn’t let his age get in the way of living life to the fullest. As he always says, “I know my limitations, but I still can do everything that I want to do.” This trip once and for all proved that.

After an uneventful paddle, we arrived at the campsite I wanted, the south site on Saganaga’s second bay, at about 9:30 AM. This was a great site with a nice exposed point where the breeze can keep the bugs away, some great places to sit and relax, two nice tent pads, and a newer latrine in good condition. We saw two grouse near the latrine that morning, and there were plenty of birds around including jays, yellow warblers, nuthatches, chickadees and cedar waxwings. It is also out of the way as most travelers stay to the north of you heading to and from Monument Portage, so you can experience relative solitude even on Saganaga which can be busy at times. The site is also relatively close to Monument Portage, which sets up a lot of day trip opportunities, and also places you in a central location to fish all three of Saganaga’s western bays.

We unloaded the canoe and set up our folding chairs for a rest before setting up camp. Grandpa and I are good friends and there is never a lack of conversation, whether we are catching up on family news, sharing about the various challenges and struggles we have encountered or are encountering, or discussing our mutual faith in and love for God. We made sure to complete our daily prayer time before getting to work.

Our faithful 5 person Coleman tent went up with little effort. We don’t bring a tarp, so the larger tent allows us to have lots of space and gives us a place to retreat to if it is rainy. Grandpa then worked on organizing his things in the tent while I worked to clean up the site a little. The recent storms had downed a large cedar tree that had rotted on the inside, leaving it just behind the fire grate. I cut it into pieces, cleaned up the shore line, and formed two large brush piles at one end of the campsite far away from the grate. Once it dries, it will be incredible firewood for this site. I pulled the trunk of the fallen cedar over to the fire pit area and created a back rest for the logs that already were there. The campsite was soon neatly organized and ready for us to call it our home for the next two days. I also cut a length of dry red pine I found in the woods and brought it back to camp to saw and split as needed for firewood.

We enjoyed summer sausage sandwiches for lunch. No sooner did we finish cleaning up before a steady rain shower drove us into our tent, where we played cards and rested, still tired from our journey. I fell asleep lullabied by the calling of the loons, ecstatic that I was once again camped within their territory.

Once the rain had stopped and we were rested, we fished the bay around our campsite. Grandpa caught a small bass which we filleted. I lit up the campfire and we enjoyed hot dogs for dinner with our fish. After an evening cup of coffee and cleanup, we headed out into the bay to fish some more. We had a couple of hits but were unsuccessful. Back at camp, I headed in for a refreshing swim to clean off the sweat from a hard day’s work. After a quick gin rummy game we both turned in for the night. 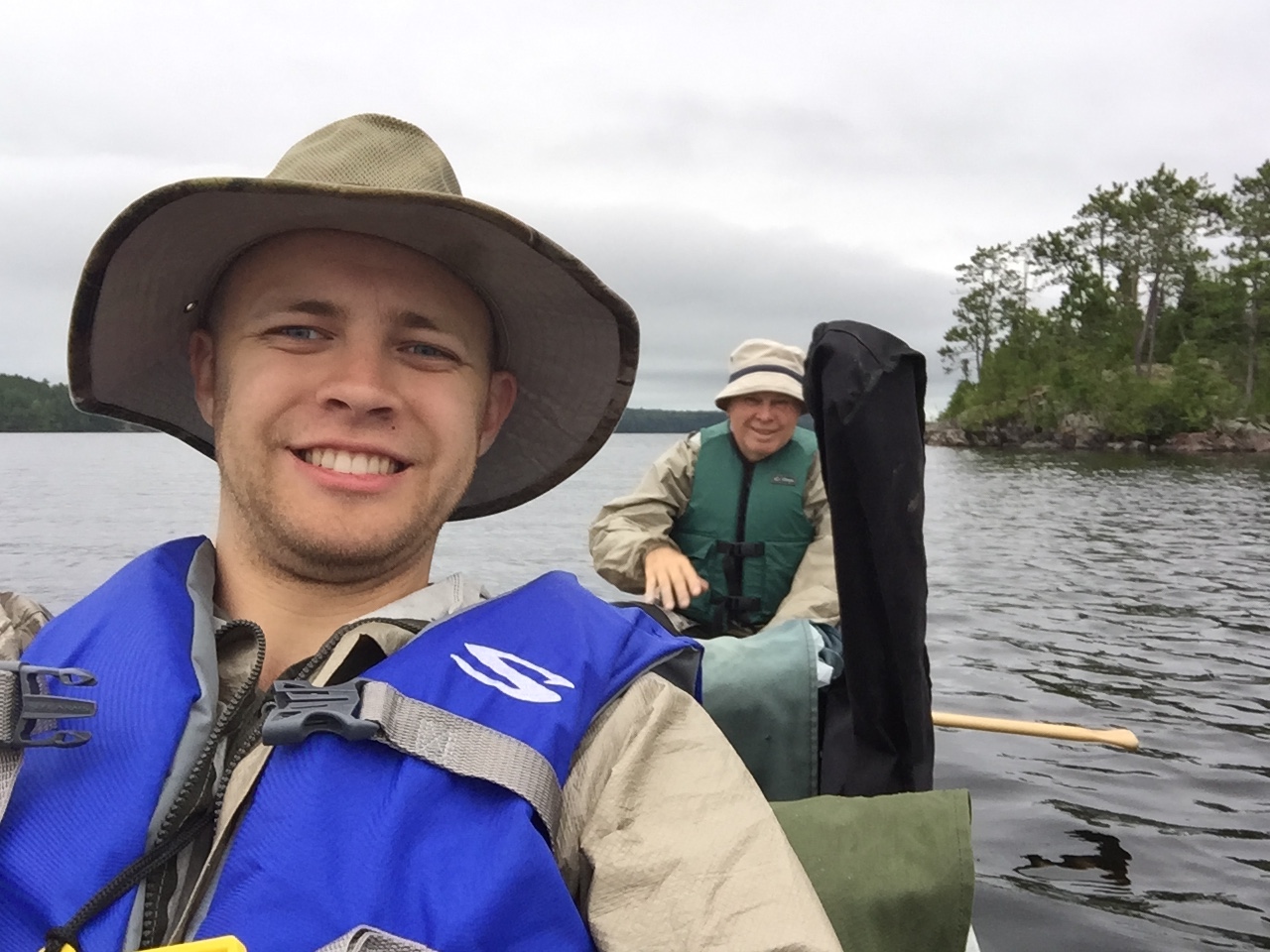 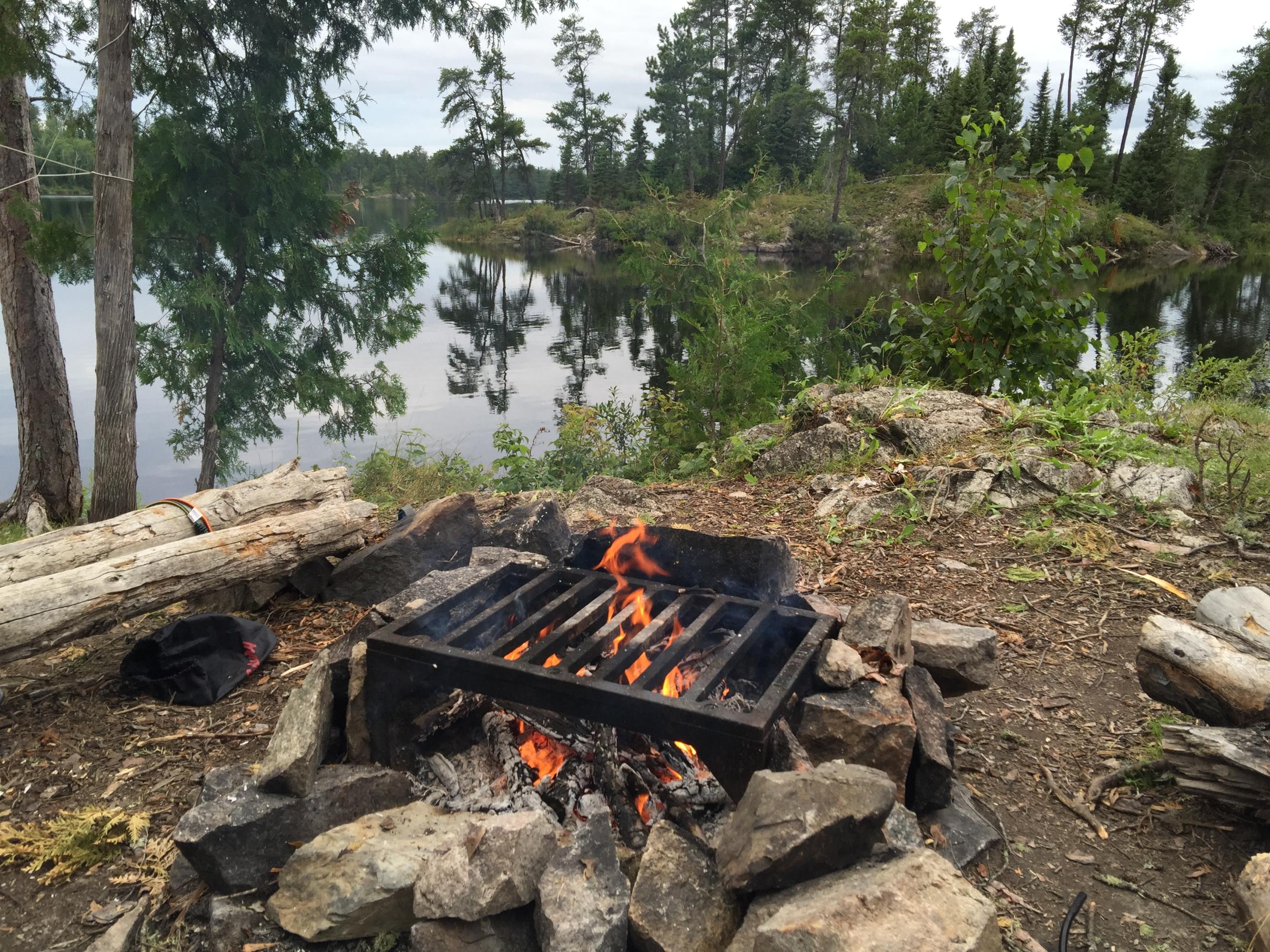