I had picked up my entry permit in Duluth and slept there after driving up from Minneapolis Thursday night. An early start on Friday meant I found my way to the Isabella put-in and was through the first portage by 9 am.

I have backpacked solo before in Michigan, Wisconsin, and Minnesota, but this was to be my first solo canoe trip. Over the winter, I'd bought an old 15.5' Bell Drifter. I'd tested it on some local lakes and felt comfortable paddling it around. Experience-wise, I'd spent a lot of time on the water and in the woods, but this was still a first. As I double-carried my gear from the car through the comfortable portage to Isabella, I was ridiculously excited.

This trip was about rest. No big agenda, no aggressive schedule, just some short paddles, a lot of books. The last couple years have been a non-stop blur of motion as we've moved with four kids, switched jobs and career paths, found new schools and a new home. It was time for some quiet.

Isabella Lake was not quiet. Even at the early hour the wind was picking up from the north. My original plan had me going straight north and finding a campsite on the north side of the lake for night one, but the whitecaps rolling across the lake meant I would try something else. So I elected to head east along the south shore, make the quick jump into Boga Lake and then find something up the Perent River or on Boga.

As soon as I got out on the water, I realized this paddle would be slow, arduous, and bumpy. The canoe handled and tracked wonderfully with my heavy pack stashed in the bow while I sat or kneeled in the stern. I was able to duck behind a few islands.

A brief, but light rain had me contemplating finding a spot on shore to dig out my rain jacket, but as I needed the portage into the Boga Lake, I decided to push for the landing and the rain shortly stopped.

When I found the outlet that leads to the portage and ducked into the cove, the wind immediately died down. I knew I'd made a wise decision. I casted my line a few times and then decided it was time to hit the portage into Boga.

This was my first time portaging solo and it went smoothly. In no time, I was looking out at Boga Lake just as an eagle took off near me and a fish jumped twenty feet out. Timing is everything. Boga was calm, but small and I knew the site on the Perent River was preferable so I scraped over some rocks and paddled up the wide river a bit to a beautiful site that would be my home for two nights.

I ate lunch, set up camp, and then spent most of the afternoon underneath the tarp reading while the weather alternated between sun and rain. After dinner, I paddled the river a bit, caught a few small walleyes, and climbed into my hammock for bed early. Despite wind and rain, I was already hooked on solo paddling. 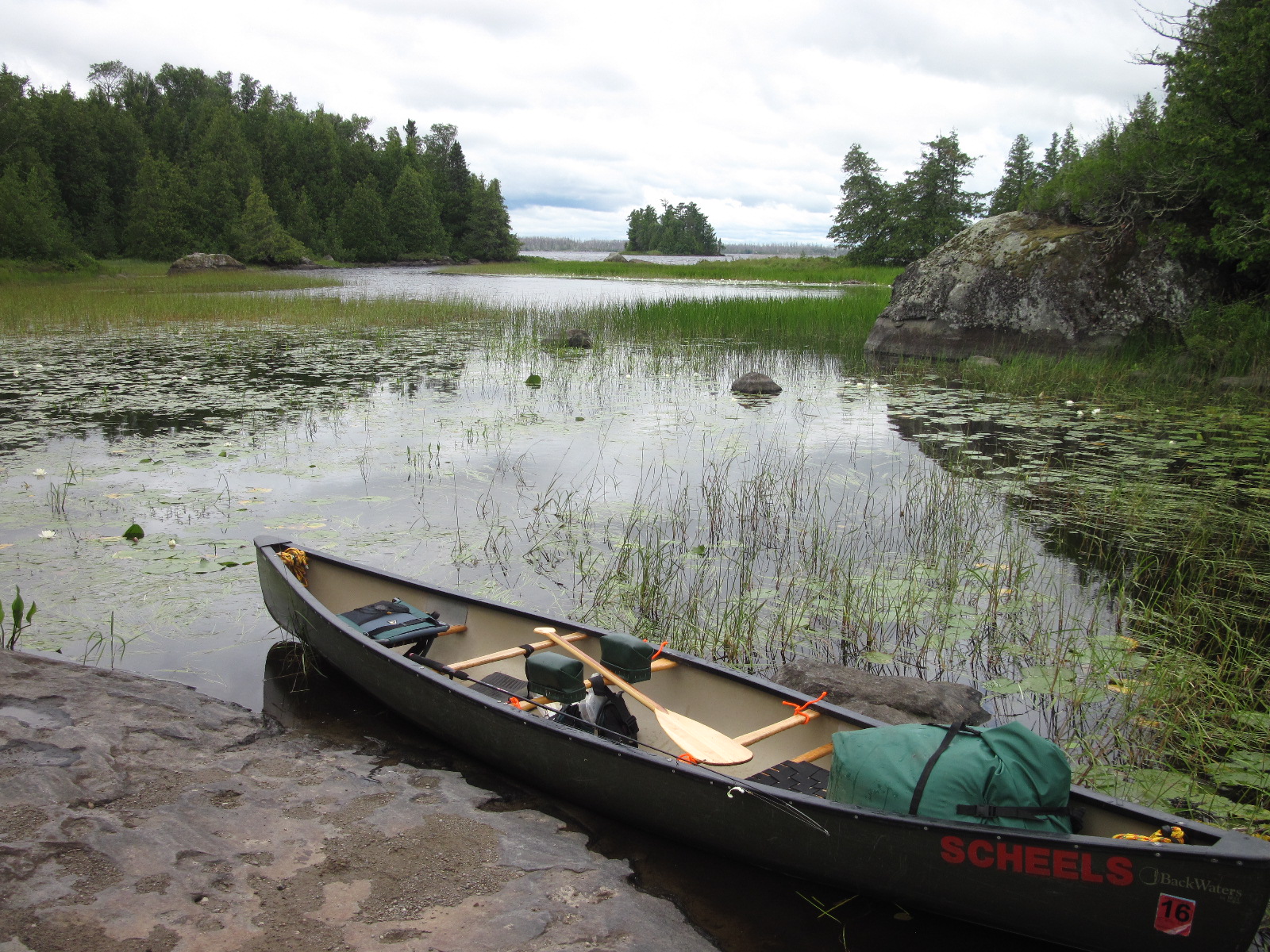