Some of the best trips are ones that you plan weeks, months and even years for. My wife wonders why I put so much time into getting things ready for each trip, and I explain the main reason is so that I can some back to her safely. This trip however, was a trip that I spent two days getting ready for. I had originally scheduled this trip three weeks later, but because of the early ice breakup and also because of the crazy alignment of the stars, I decided to go early. So, Wednesday morning I decided to get my things together.

The first thing that needed to get done was to figure out a way to get my new canoe up to Ely. I drive a truck without a topper and haven't ever put a canoe on top of it. One of the advantages of being a new father is that I have plenty of quiet time in the middle of night while bottle feeding my son in which to ponder the intricacies of car topping a canoe. My solution came quick, I would build a rack out of 2x4’s and anchor them with cam straps in the middle of my truck bed. My rack system consisted of 2-2x4s, 4-cam straps, 4-eye bolts, and the rack was done in an hour. Yakima and Thule are going to be ticked if this method ever gets out.

Thursday night on my way home from work I stopped by the grocery store and picked up some food, not anything too elaborate. Some meat, cheese, soup and a package of bagels along with whatever I had from last year. That night, I also packed up all my gear and set it out in the garage. Friday morning I had some business to take care of and by noon I left the office and was headed home to strap on the canoe and to grab my backpack and boots. The weather was looking nice, but rain was threatening.

I arrived in Ely just a couple minutes past 5:00 and looked for a place to buy a pair of yoke pads and maybe pick up a map if I had enough money. Every outfitter that I drove by was closed, so no pads for me. My solution was to duct tape a rolled up towel to my life jacket. It wasn't a very good solution as it turns out. I had a GPS unit that I am pretty good with and because I wasn't planning on going too far in, I decided to use just that and not to take a map. No map, no pads, could be an interesting trip. 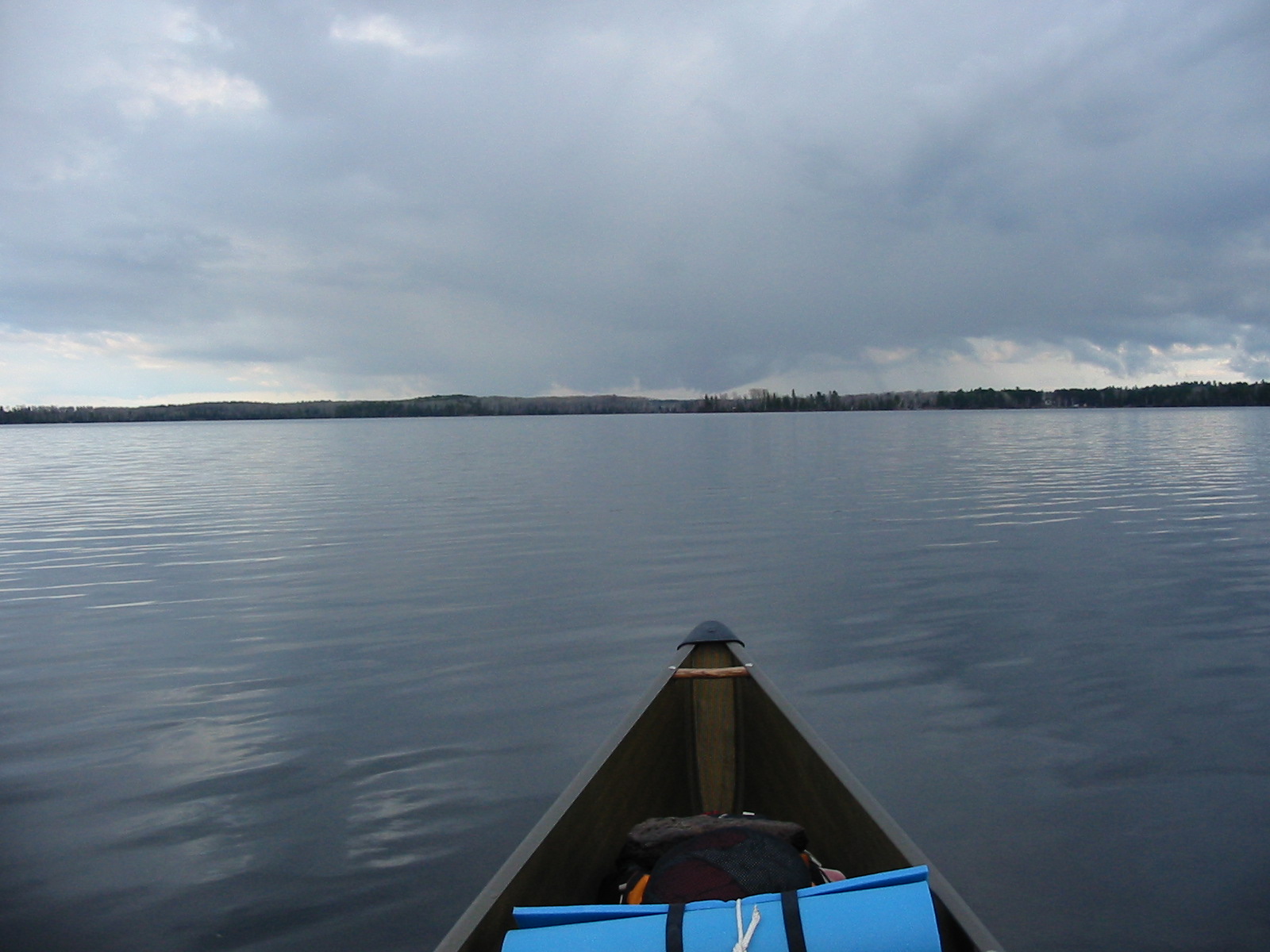 I got to Farm Lake at about 6:00 after getting a foot-long at subway. I filled out the self-registration card and unloaded my backpack and canoe then I laced up my boots. Luckily, the lake was flat and that was something that I had been worried about. Although I had paddled my new Northwind on a small lake a week prior, I was still unsure about how it would handle with only one person and little gear. I added three good size rocks to the bow and hopped in. Before I knew it I was half way across the lake with a huge smile on my face. I snapped a picture and continued the 1.5 mile trip across the lake. Because it was getting late, and due to the heavy rain that was starting to fall, I grabbed the second campsite that I came to. It was a pretty good one. The rain stopped soon after I setup camp. I explored the surrounding land mostly looking for dry fire wood. 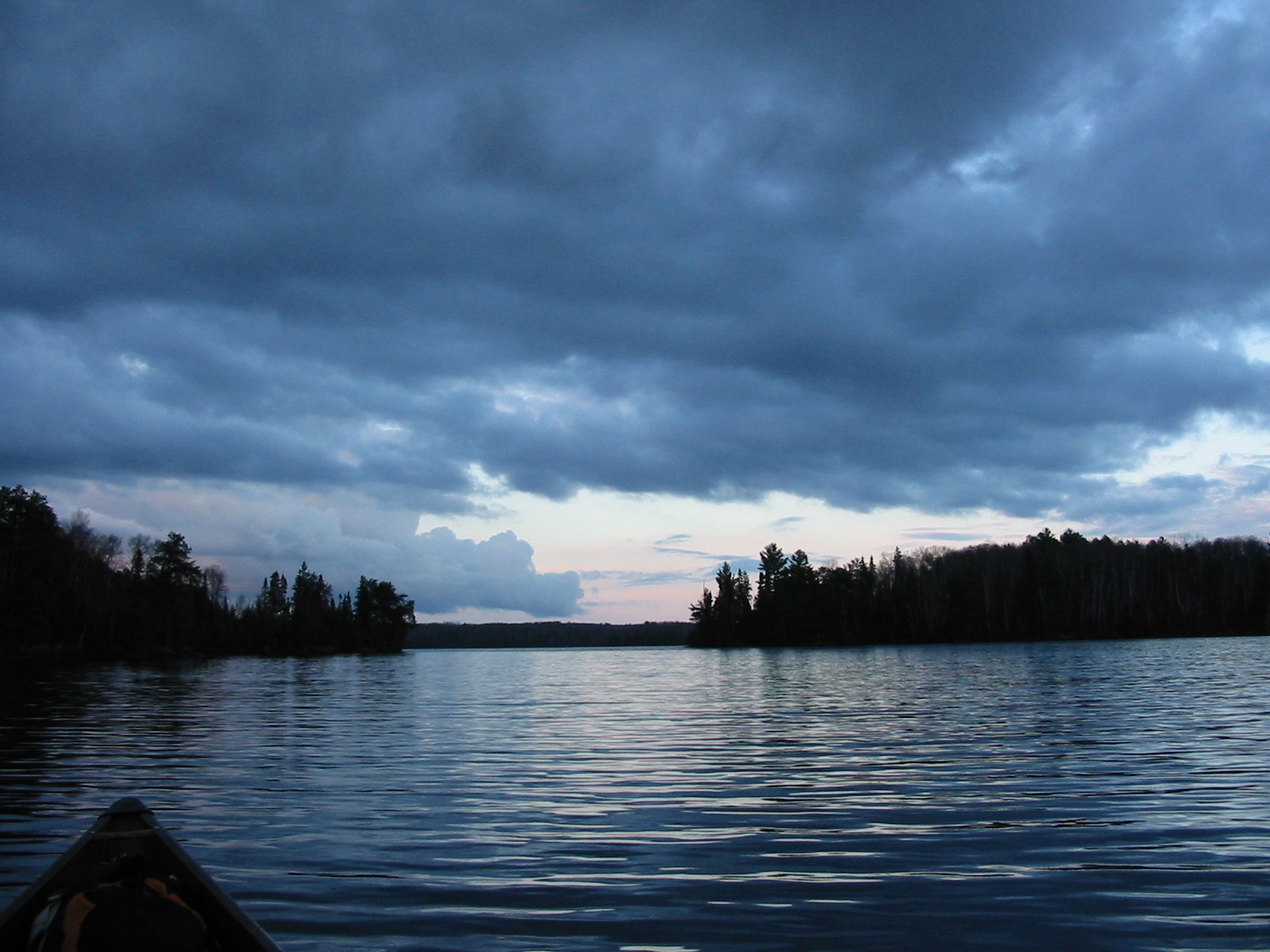 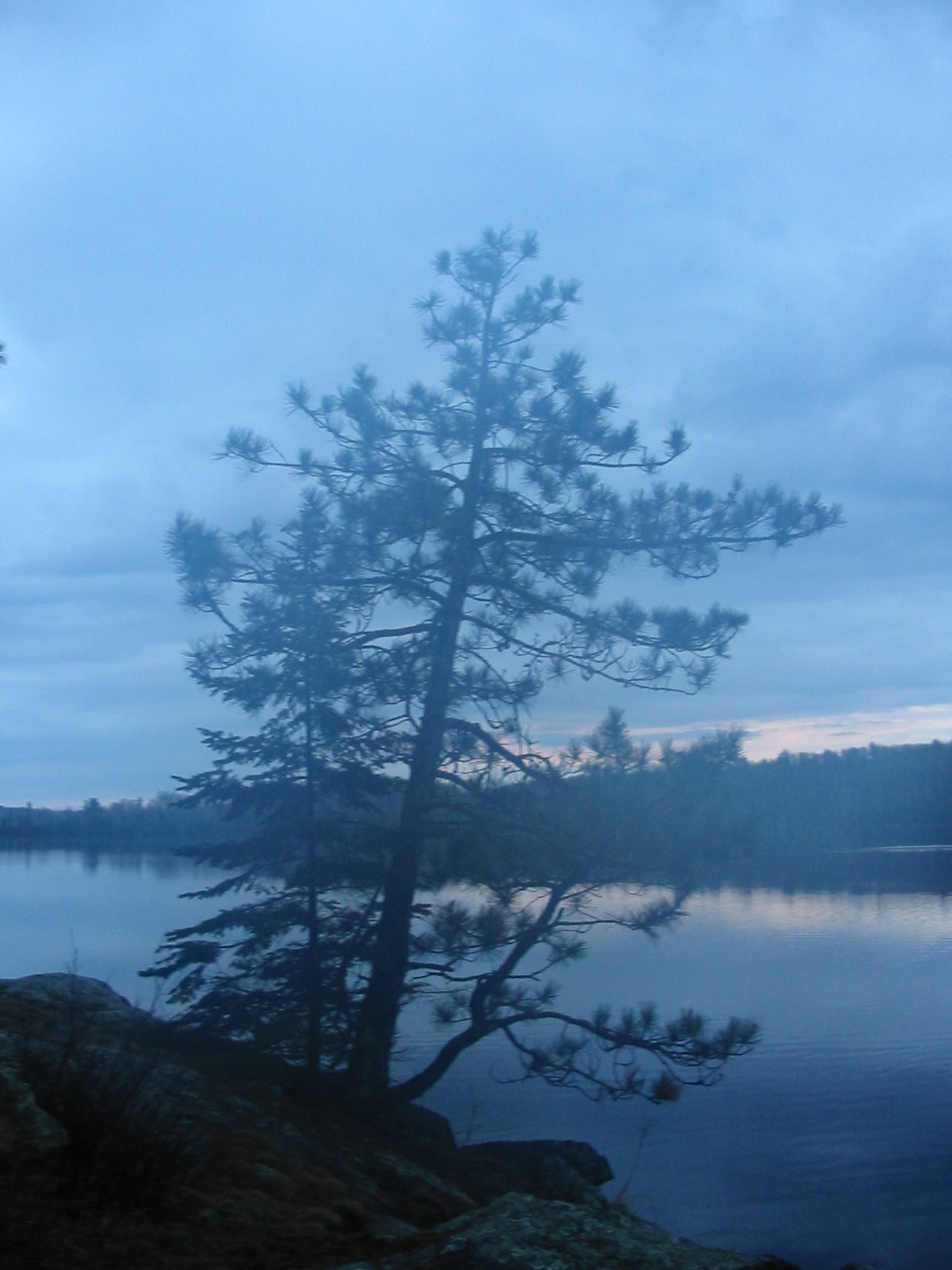 At the campsite, (waypoint KR2 on my GPS) just before lighting a small fire, I found a live round from a 38 special. That gives one pause. I sifted through the ashes to make sure there were no others and lit a slow burning-smoky fire. If people want to bring guns and ammo into the wilderness, they should at least take them back out with them.

During my first solo evening of the year, I found that I was very sensitive to every little sound from the woods and water. A couple times I caught myself thinking about large hungry man eating bears and wolves jumping out of the dark. I had to pull out my bag of Jedi Mind tricks to eliminate the thoughts of what could be.

At 11:15, fog had engulfed my campsite. Prior to that, the stars had made a nice appearance. I put out the fire, packed up all my gear, slung the bear bag over a tree limb(one shot) and changed into some expedition weight thermals. I then situated my insulated air pad in my hammock and maneuvered my way into my sleeping bag. It wasn't too bad, but not the easiest thing to do.

The 2nd day I woke real early, then went back to sleep. I was up only twice during the night. Once because a great horned owl visited my camp site and started hootin’ away and the second time I answered nature's call. That is pretty good considering I was in a hammock with temps close to freezing and I rarely sleep well the first night out. It rained for the majority of the night but everything that I placed under my hammock was still dry in the morning. Rain always helps me sleep.

I did manage to break camp rather early. Breakfast was oatmeal and coffee, pretty much what I eat everyday.

I paddled all morning, crossed four portages I think. Just before a short portage I quietly paddled up to some timid mergansers and tried to get a picture of them. I managed one rather blurry shot as they flew away. After putting the camera away I happened to glance up and see a huge Osprey right above perched on a dead limb who had been watching me for probably quite sometime. By the time I got my camera back out, it had just taken flight and I snapped another lousy shot. They sure are big birds. 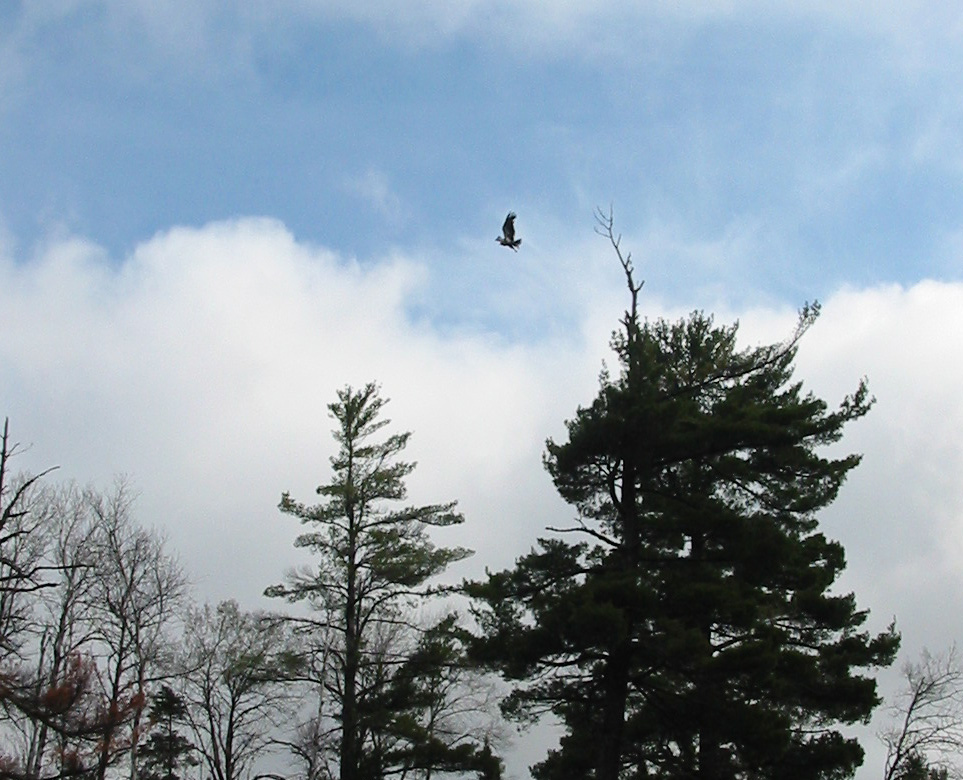 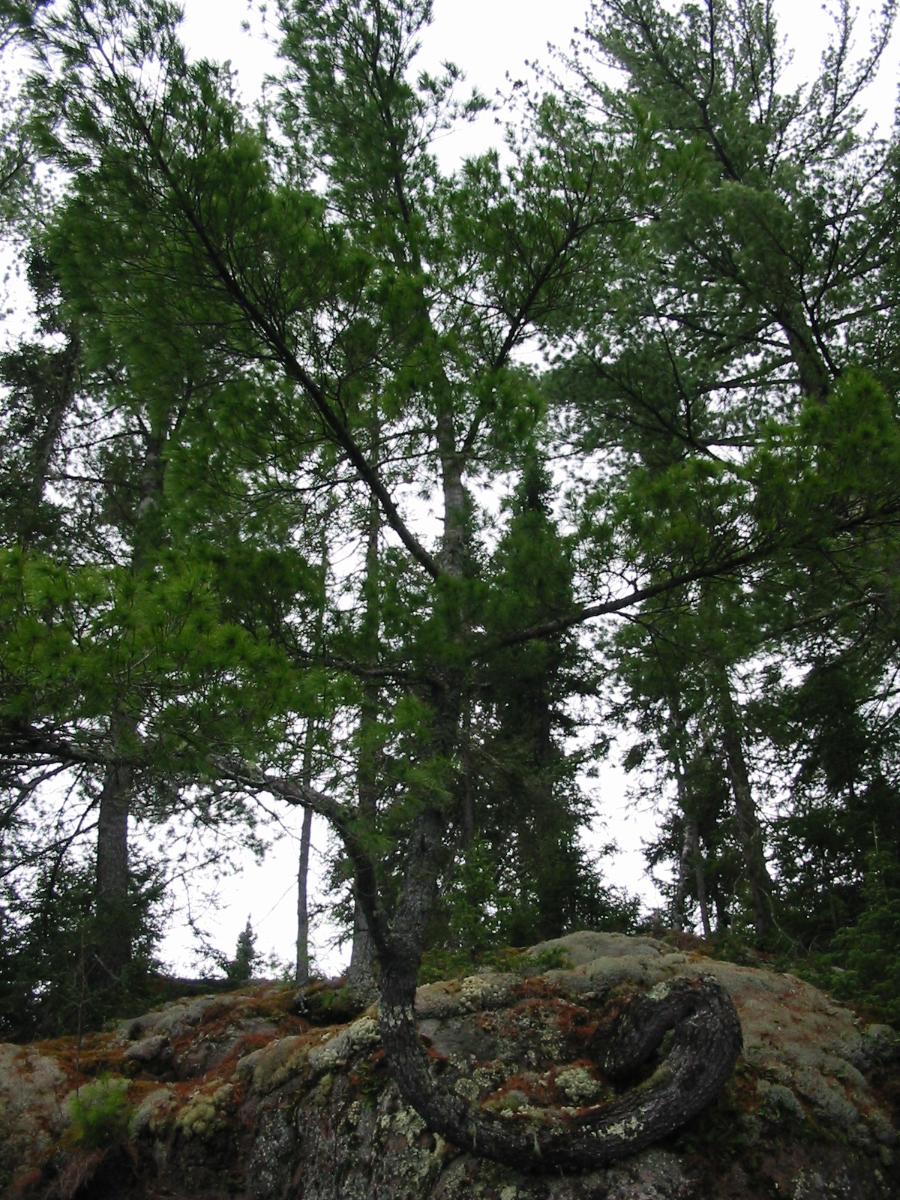 One draw back to using a GPS is that you have to zoom in and out to get a big picture of where you are. I ended up making a right instead of going straight and found myself on a longer portage than I expected. It was about 170 rods into Clear Lake. I really would have liked some yoke pads for that one. Since I had no route planned this detour was just fine with me. I continued south over a beaver dam and another portage. I eventually found a nice southeast facing campsite and claimed it. Not too much competition for campsites this time of the year. I really wanted to make full use of these long days, but all the miles that I covered Saturday, would have to be redone on Sunday, in addition to Farm Lake which I did Friday night. I must have had my hammock slung early in the afternoon. I decided to enjoy the nice breeze and take a nap. I crawled inside without a sleeping bag thinking that I would probably just get a few short winks in. There was something about those pines and the wind. The sun was shining directly on my shelter and I slept like a baby. I would guess that I slept for over two hours. I love those hammock naps-there is nothing else like it. 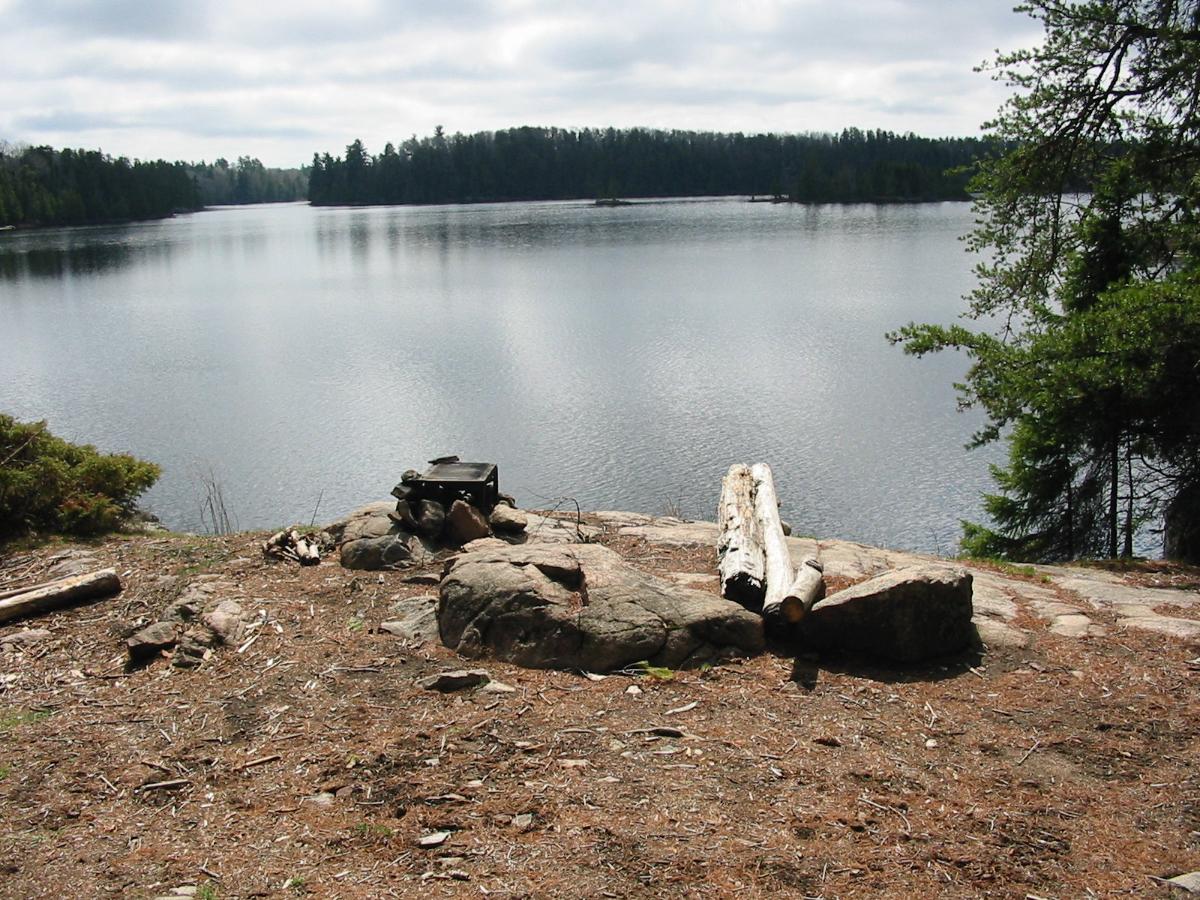 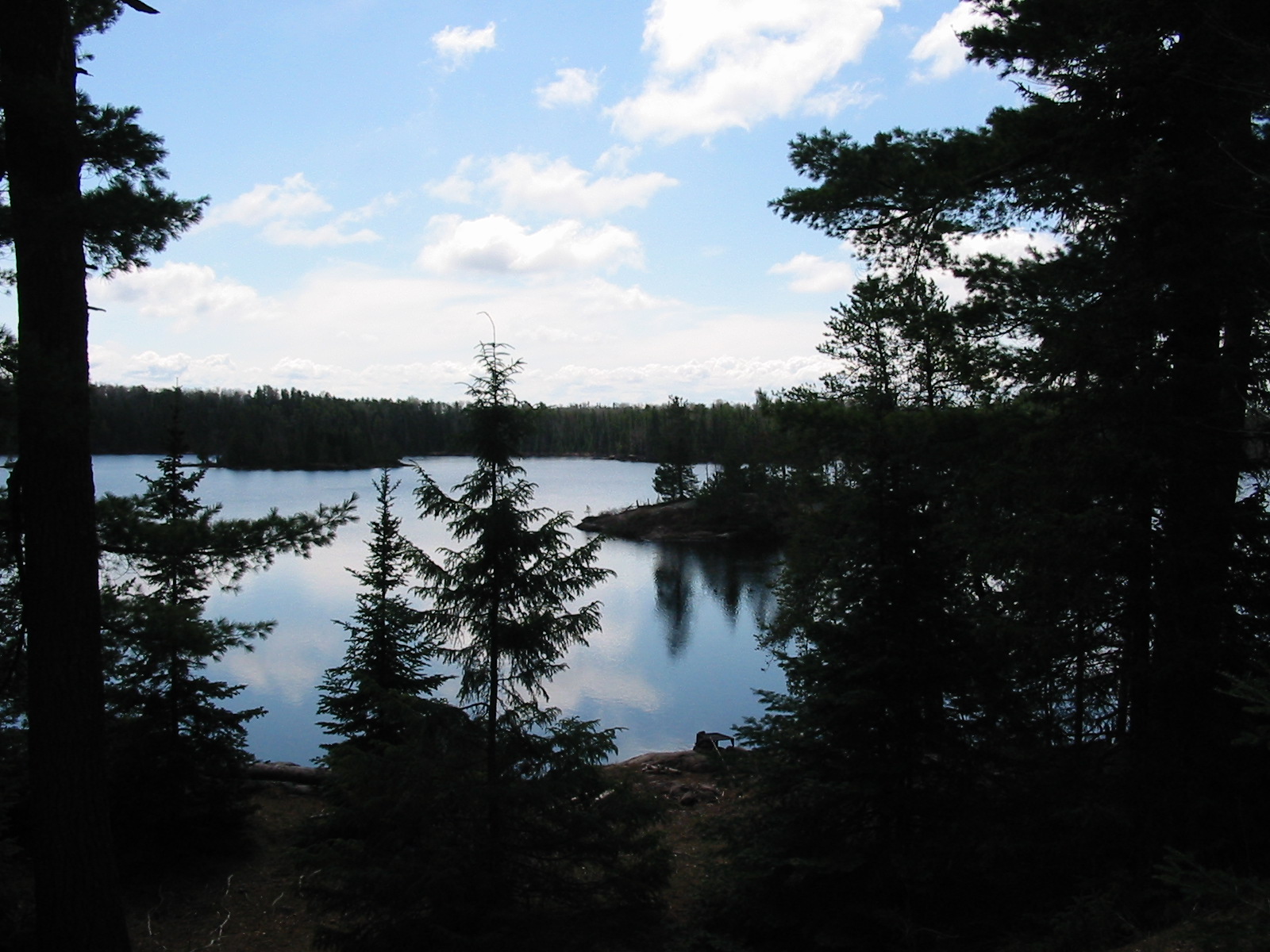 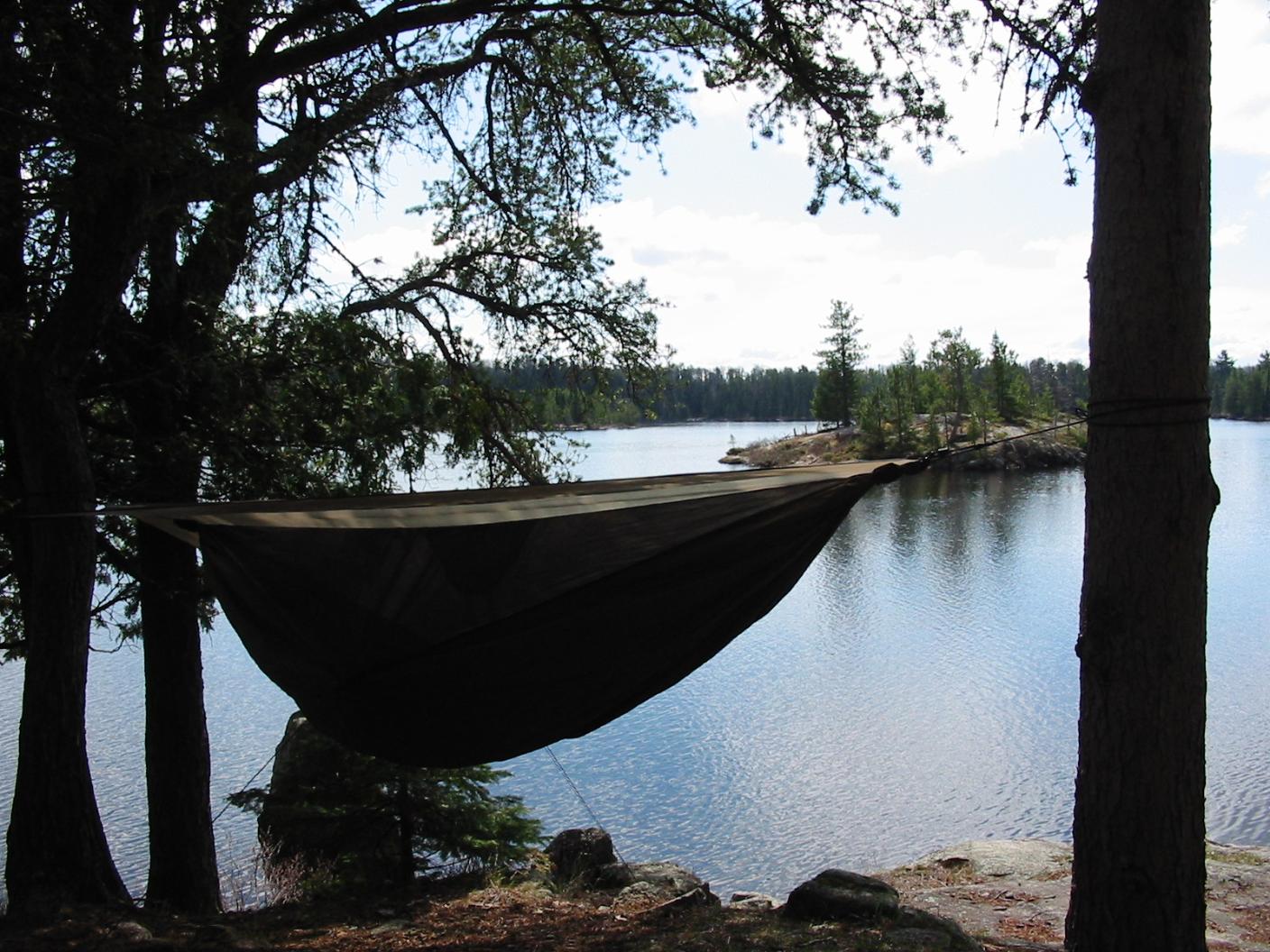 When I woke up, I wanted to paddle, but before that I figured that I would be better off gathering some firewood and exploring the land around the site. I stumbled upon a rotting pine so I yanked off as many knots as I could. They make great fire fuel, and sometimes can create colorful flames if there is a lot of sap in them. After gathering an arm full I made my way back to camp, and jumped into my boat. I went across the bay to watch the sunset. I was early but enjoyed the two and a half hours sitting on a rock with a stick and a knife. I watched lots of clouds pass by, thinking that soon they would all break-up. 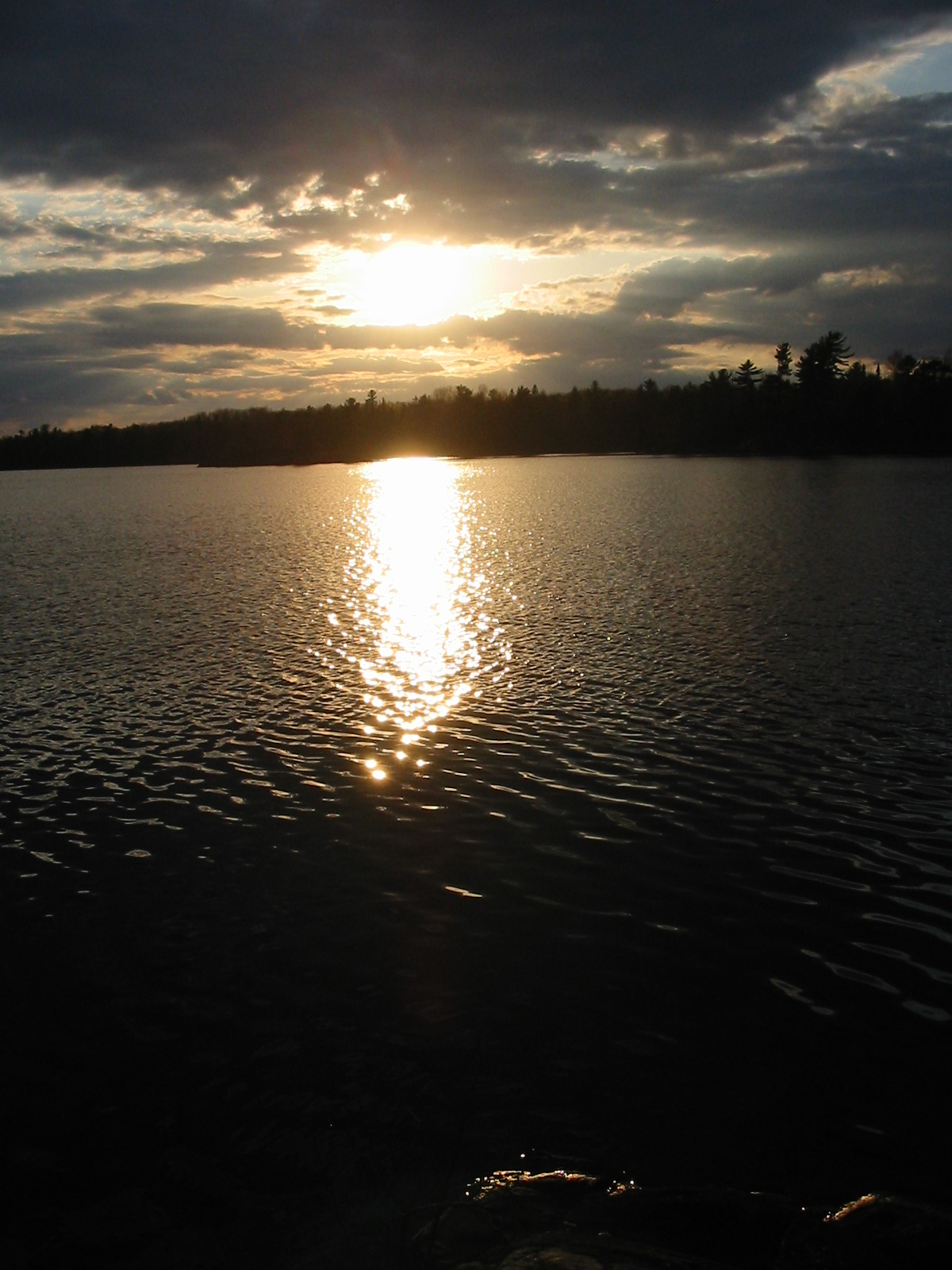 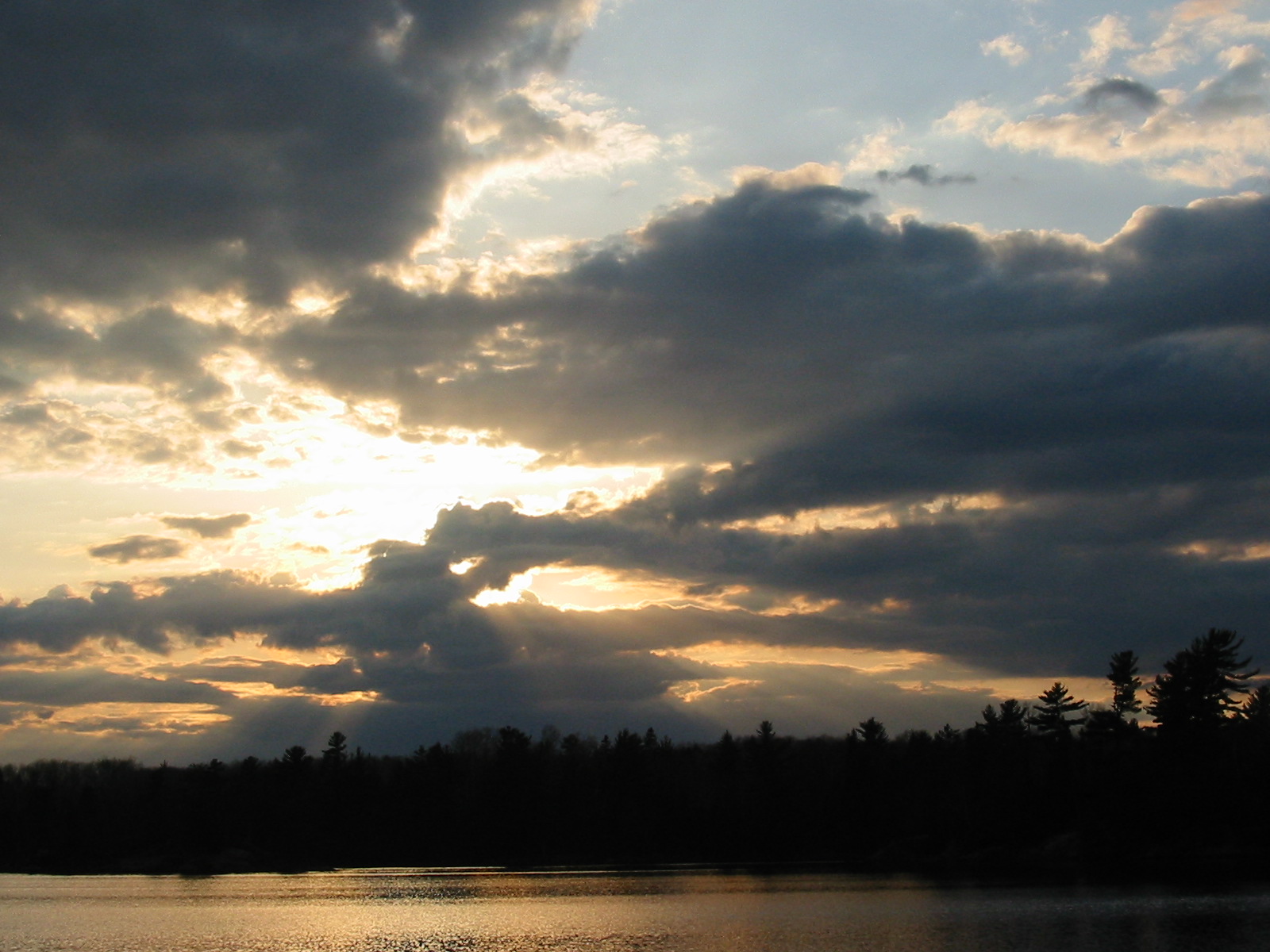 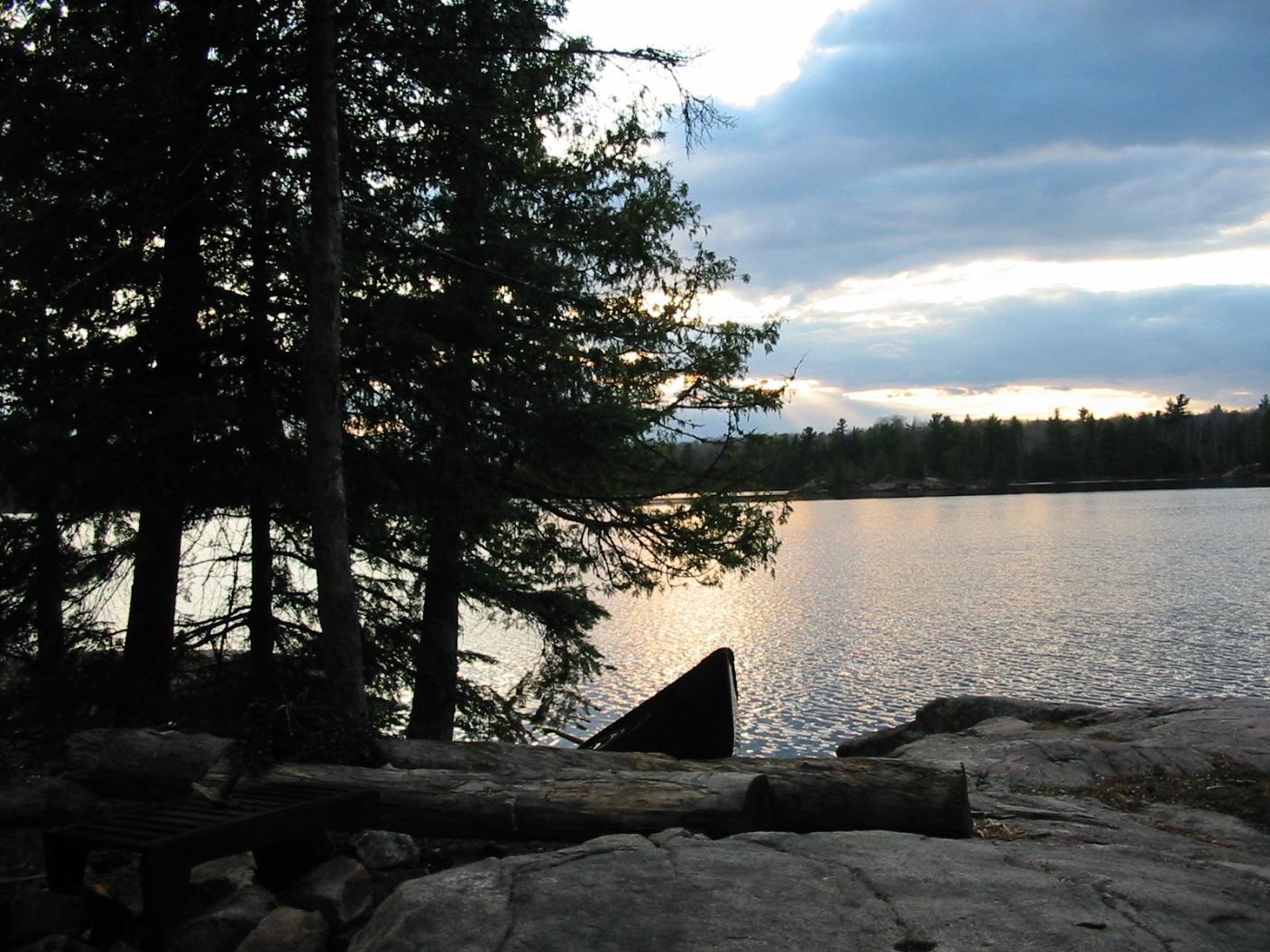 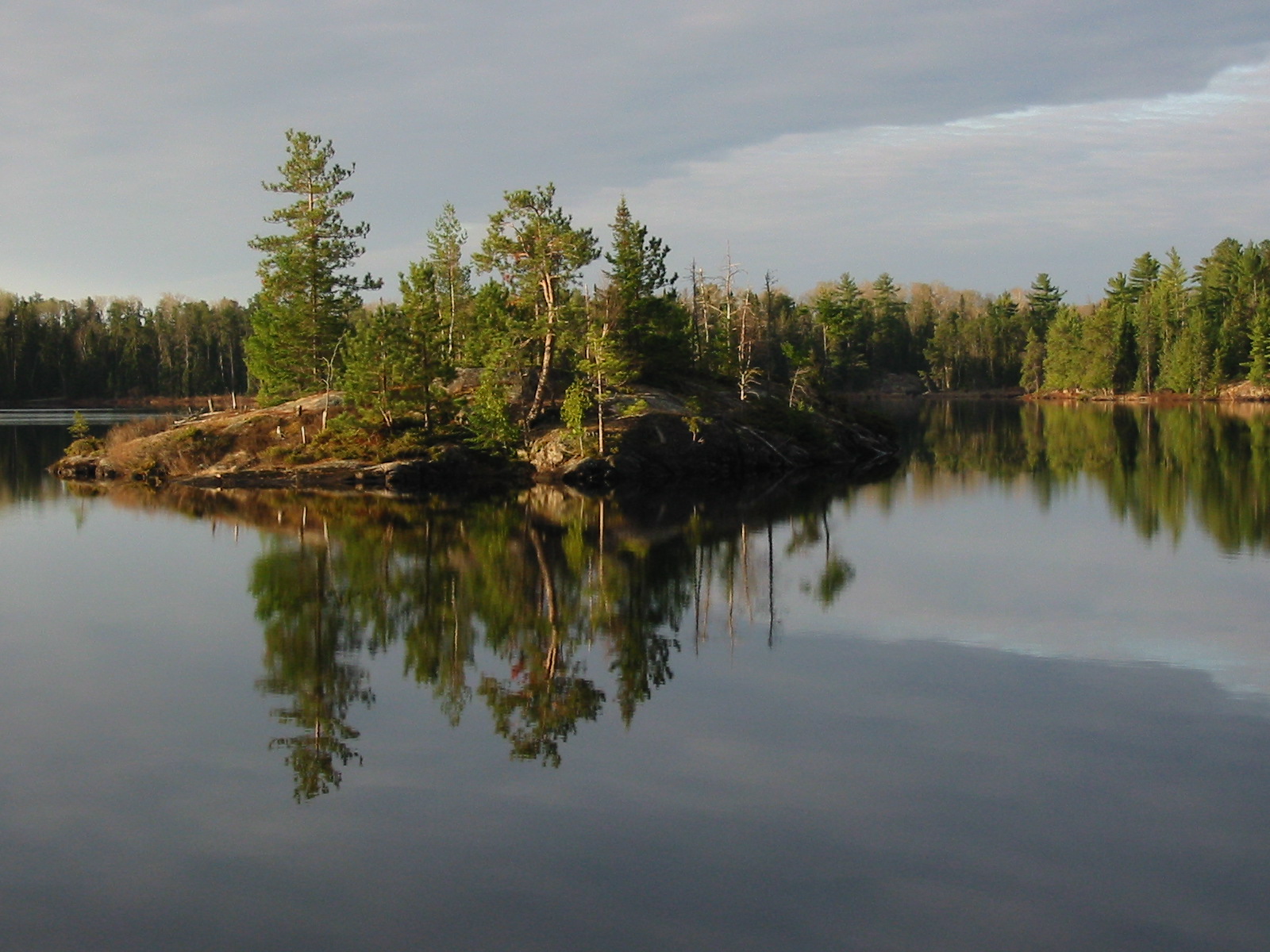 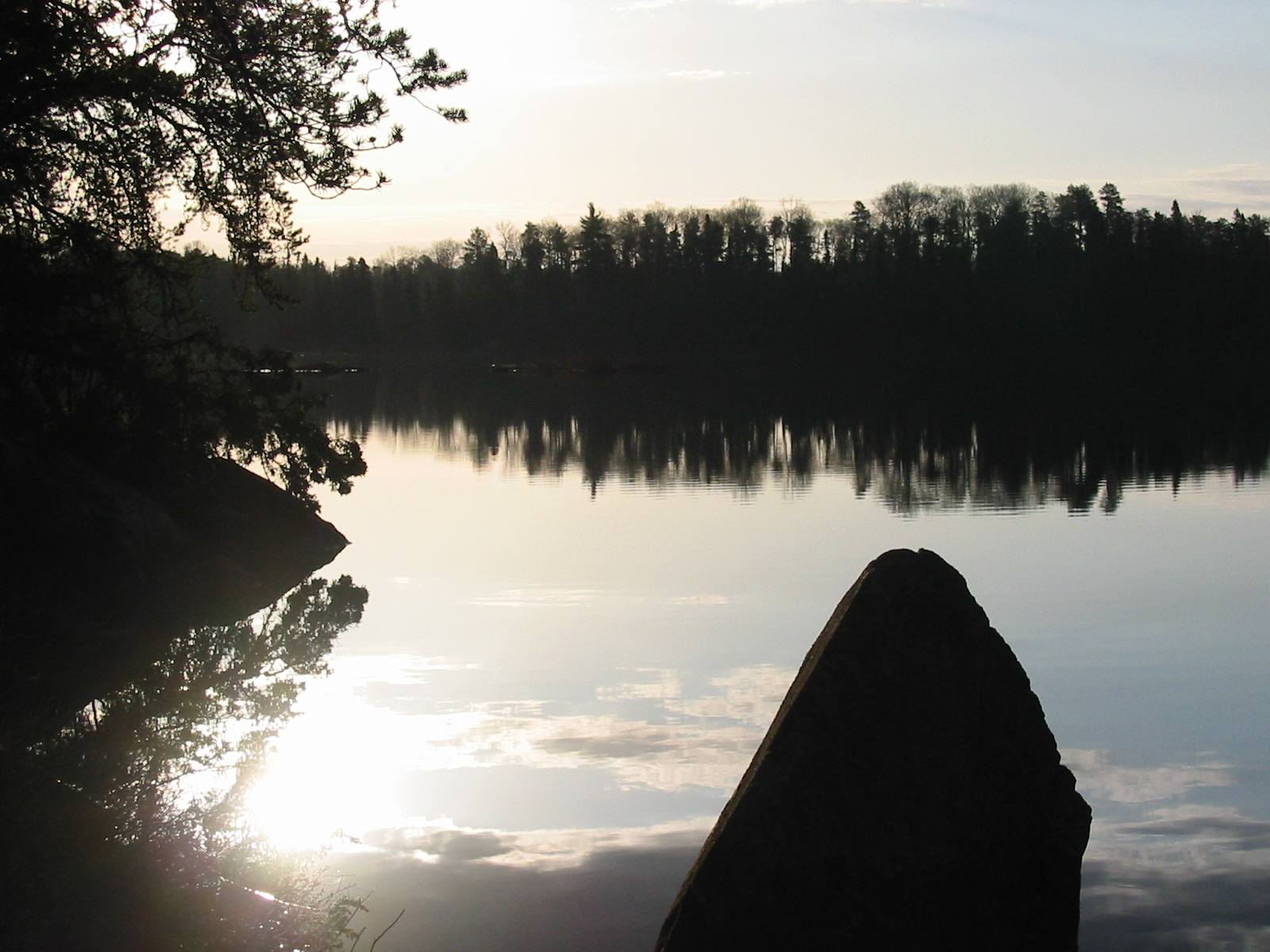 After the sun had set, I paddled back to camp and started a fire, cooked some soup and a "camp burger" which is basically summer sausage, cheese, peanut butter on a bagel. They are my favorite non-cook camp food. It was still pretty cloudy although I could see a couple stars. A couple loons were sounding off, nice fire, no bugs and very calm.

The stars eventually arrived in all of their glory. Mars was almost in the same place as last august- low in the horizon to the east.

I woke up and got an early start to the day. Breakfast was cooked and the canoe was loaded, I was on the water by 7:30. I could hear a growing breeze in the trees on the other side of the island which concerned me a little. After paddling a short ways, I rounded a corner and saw a large moose taking a drink right next to the 70 rod portage. Either it had to move or I would have to wait on the water. As I paddled towards it, I snapped a couple pictures and then slapped my paddle on the water to let it know I was there. It looked up, snorted and then it ran back into the woods, crashing through some brush. I made my hike and launched into Clear Lake. 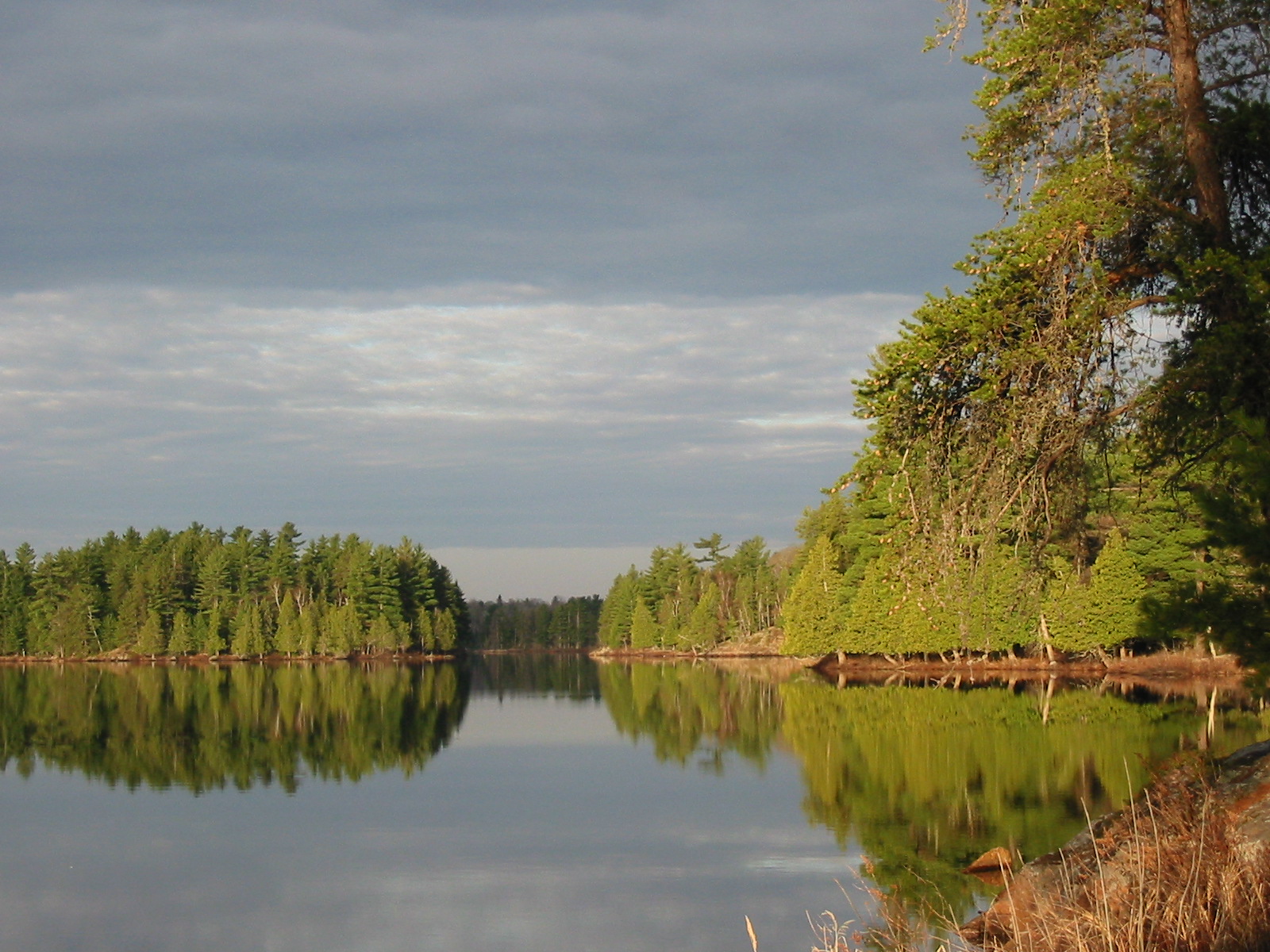 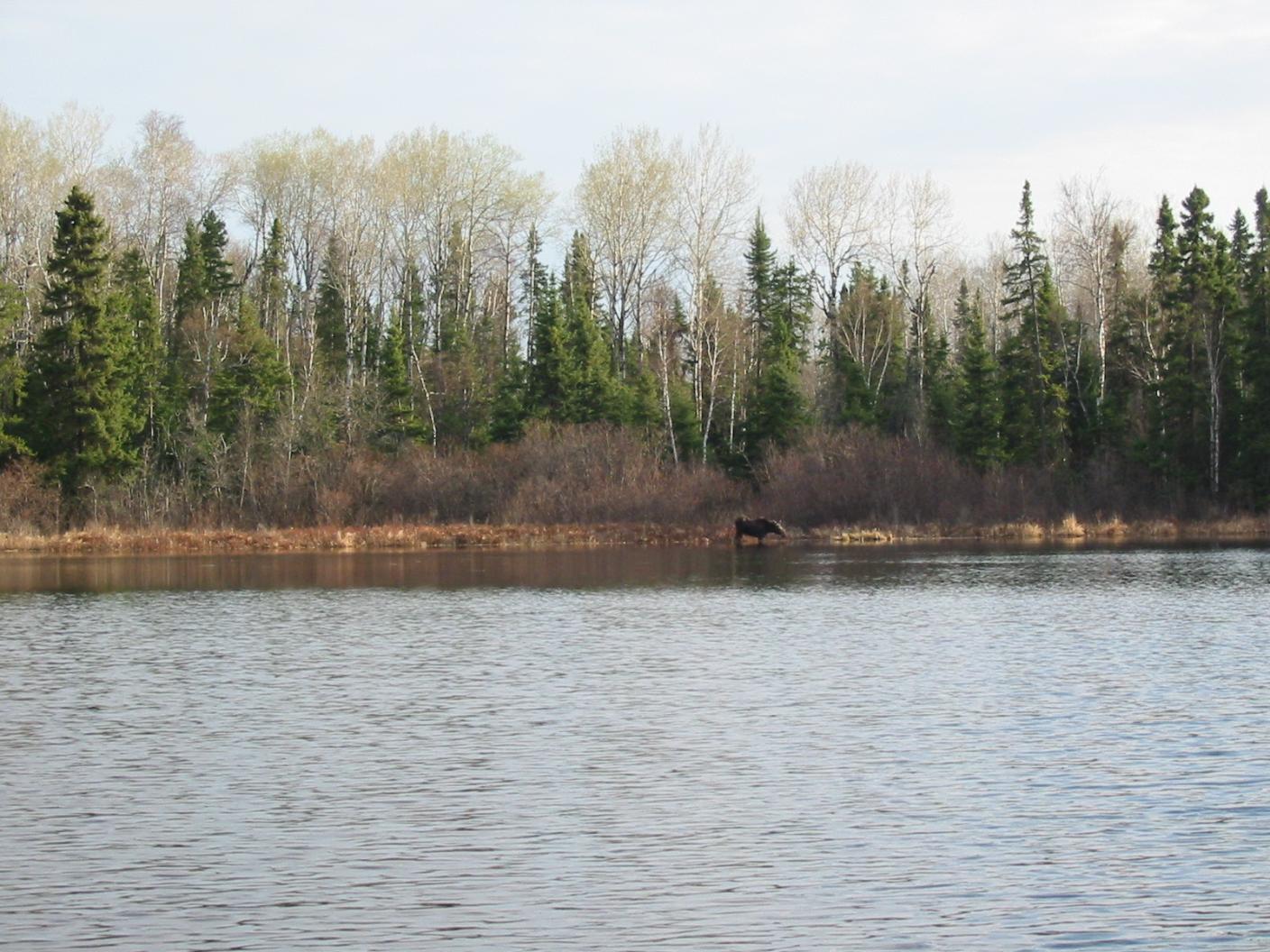 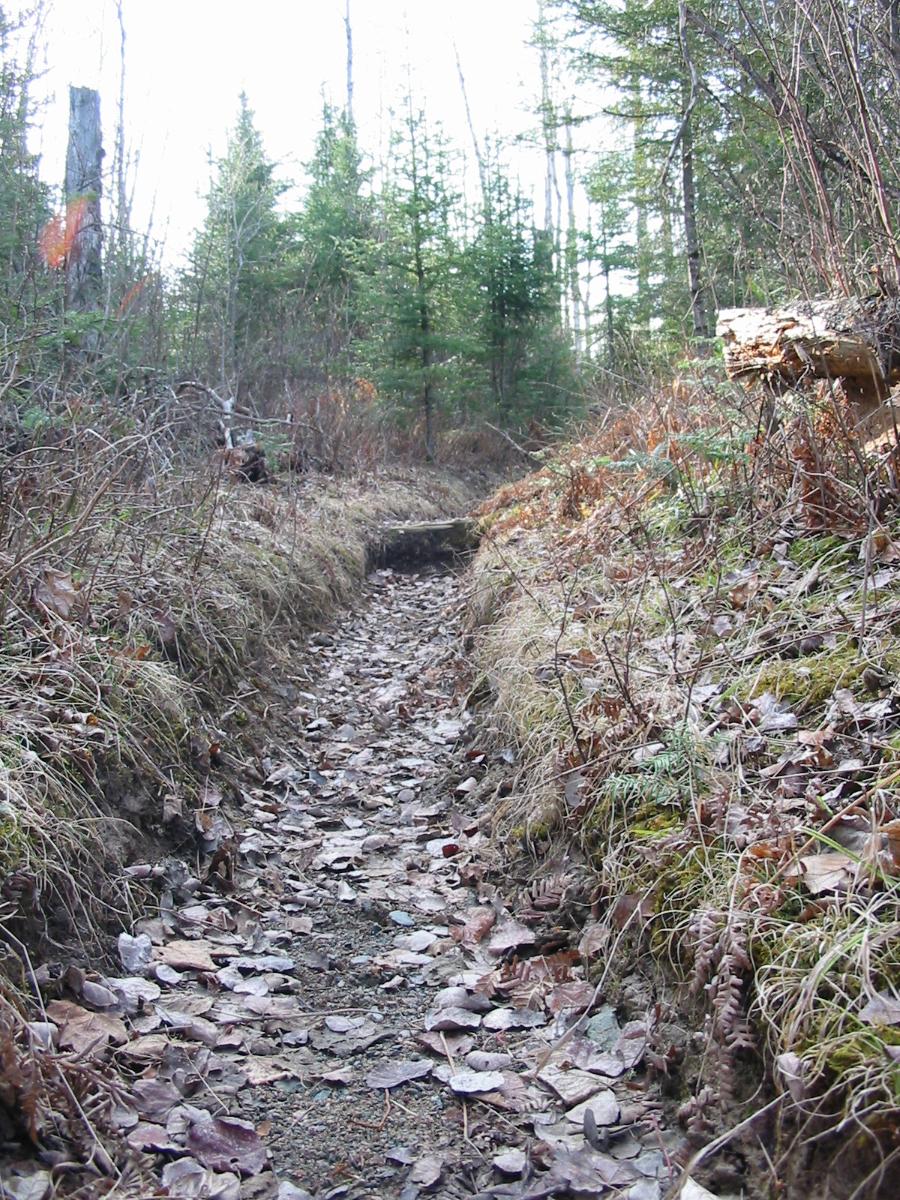 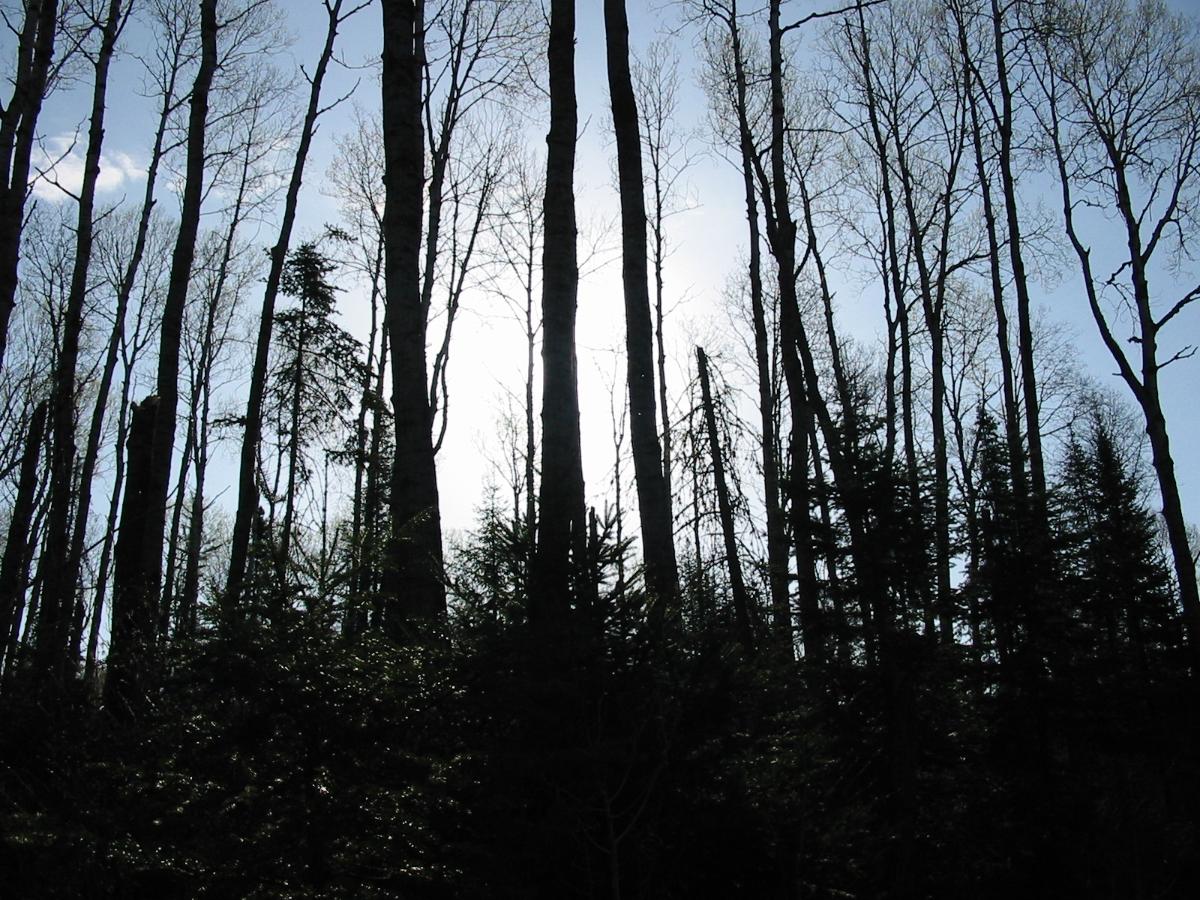 The rest or the trip was very nice, by the time I reached Farm, the water was pretty calm, and I headed straight across to the entry point.

Perfect weather, even when it was raining. Great critter sightings and complete solitude made for a great trip although it was far too short. 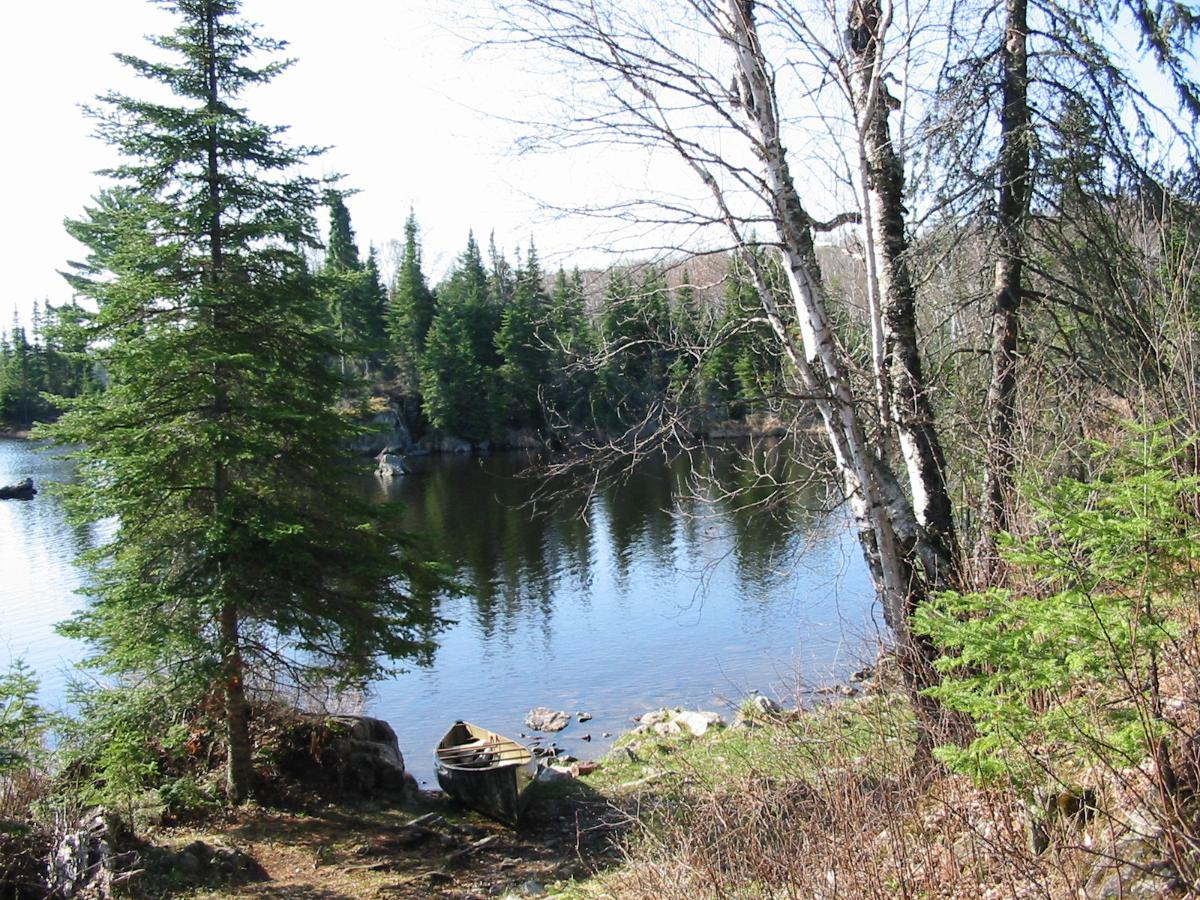 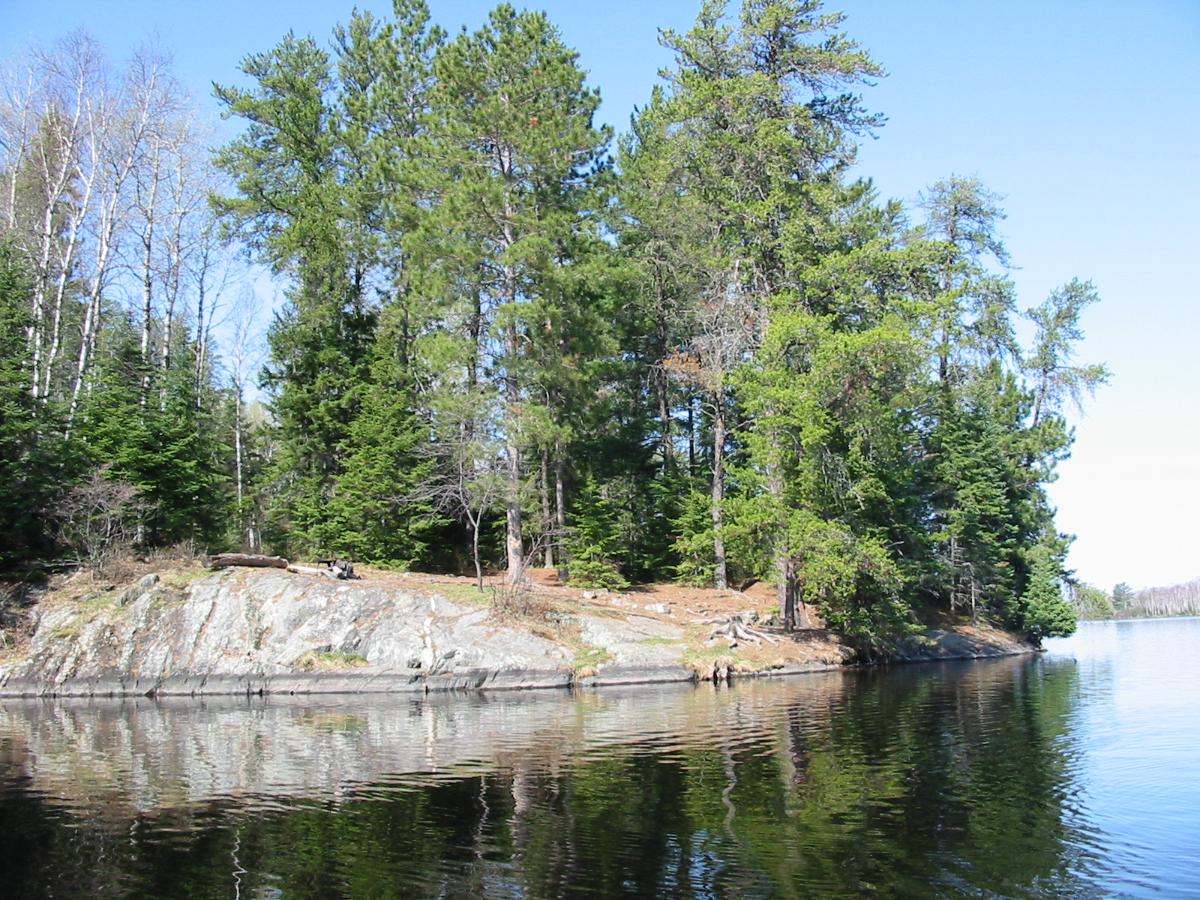