Trip Type: Paddling Canoe
Entry Date: 09/05/2016
Entry & Exit Point: Other
Number of Days: 4
Group Size: 2
Trip Introduction:
My wife and I moved from Northern Minnesota to Washington State this spring, and one of the things we knew we'd miss was canoeing in the BWCA/Quetico. A bit of internet research turned up the Powell Forest Canoe Route, located just a hundred or so miles north of Vancouver BC, but 5 hours by car owing to two ferry rides. It's a 35 mile canoe trip involving 5 portages and 8 lakes. We knew before we started that this is definitely not wilderness, at least as we have come to know it in the canoe parks of Ontario and Minnesota. Though we actually saw relatively few people, the area is being actively logged, clearcuts are visible on many hillsides, and nearly every lake could be reached by logging road. All of the official campsites have picnic tables, outhouses, and fire rings. Many of them have wood sheds, some with cut and spit firewood! The portages are well maintained with bridges, and graveled paths, though don't let that fool you as there are several that are quite long. The scenery is outstanding, with steep foothills thickly forested with dense coastal rain forest of hemlock, cedar, and douglas fir.
Discuss Trip: View Discussion Thread (5 messages)
Report
There is one outfitter in the town of Powell River who provides very excellent service. Under her advice, we elected to leave our car at the take out on the Mowat Bay boat ramp on the southern end of Powell Lake We met her there on Monday morning, and she shuttled us and our canoe to the put it on Lois Lake.

One thing we didn’t realize is that the level of many of the lakes is regulated by dams, and given that it was getting toward the end of their dry season, the water level was quite low. This wasn’t a huge deal, though paddling up to the portage out of Lois was interesting in that the bay contained a lot of flooded timber. The portage would have been difficult to find, except that there were orange portage markers guiding us up a bay to the inlet from Horseshoe Lake. This first portage was the one most affected by the low water as there was so much driftwood piled on the path that it required hopping from log to log for a bit. Not fun when the food pack is full.

Our first night was spent at a campsite right on the portage trail. The view wasn’t spectacular, but the cord of spit, dry fir firewood in the woodshed was, especially since it was cool and raining off and on.

The next day we finished the portage (400 rods), and found that we should have continued on the portage since there was a lovely camp site near the lake. Oh well. Next time. We paddled up Horseshoe Lake, and spotted a camp ground on the north end. I was a bit surprised when I saw a four wheel drive pickup there, and was even more stuck by the incongruity of being on a canoe trip in such a civilized place when a Honda Fit cruised through. After lunch, we tackled our longest portage of the trip (and maybe of our lives), of 2.4 km or 477 rods. We were pretty much spent after that, and decided to camp on Ireland lake, in an unofficial campsite accessible by road (not on the road though) but with a nice view of the lake.

Next morning, we elected to portage to Dodd Lake via the road, instead of the portage trail, saving us the trouble of loading and unloading the canoe. The portage was short by Powell Forest standards (less than 200 rods!), and there was a nice campground at the other end, where we found the Honda Fit’s owner camped as well as an RV.

Rain started about half way up Dodd Lake. We debated about stopping and waiting it out, but neither of us enjoy spending the day under a tarp, so we elected to push on. The next few lakes were by far the most scenic, with steep forested slopes coming right down to the water.

The last portage of the trip takes you down to Goat Lake, which adjoins Powell lake via a narrow channel. This is the lowest point of the trip. I’ve been on lots of tough portages, and the portage down to Goat Lake is competition for the worst. After a relatively gentle climb for the first half, the trail drops over 600 feet to Goat Lake. Not fun in the rain! There is a small campground at the end with three small sites in the dark, shady,dripping rain forest. Camping was not an inviting prospect, so we paddled on, finding a campsite on a small peninsula just before dark. It felt like home, with ledge rock shores, caribou moss, and pine trees.

All that was left the next day was to paddle down Powell lake about 10 miles to the take out. Powell lake is quite scenic, even with its many floating cabins. It’s waters are still being used to transport logs via tug.

All in all,the trip was a success. In retrospect, we should have spent a bit more time planning; we carelessly let our packs get too heavy, and given the length of the portages, this was not wise. We did miss the remoteness and solitude of the Quetico, but the incredible scenery of British Columbia was fair compensation we thought. We are already looking forward to our next trip up there! 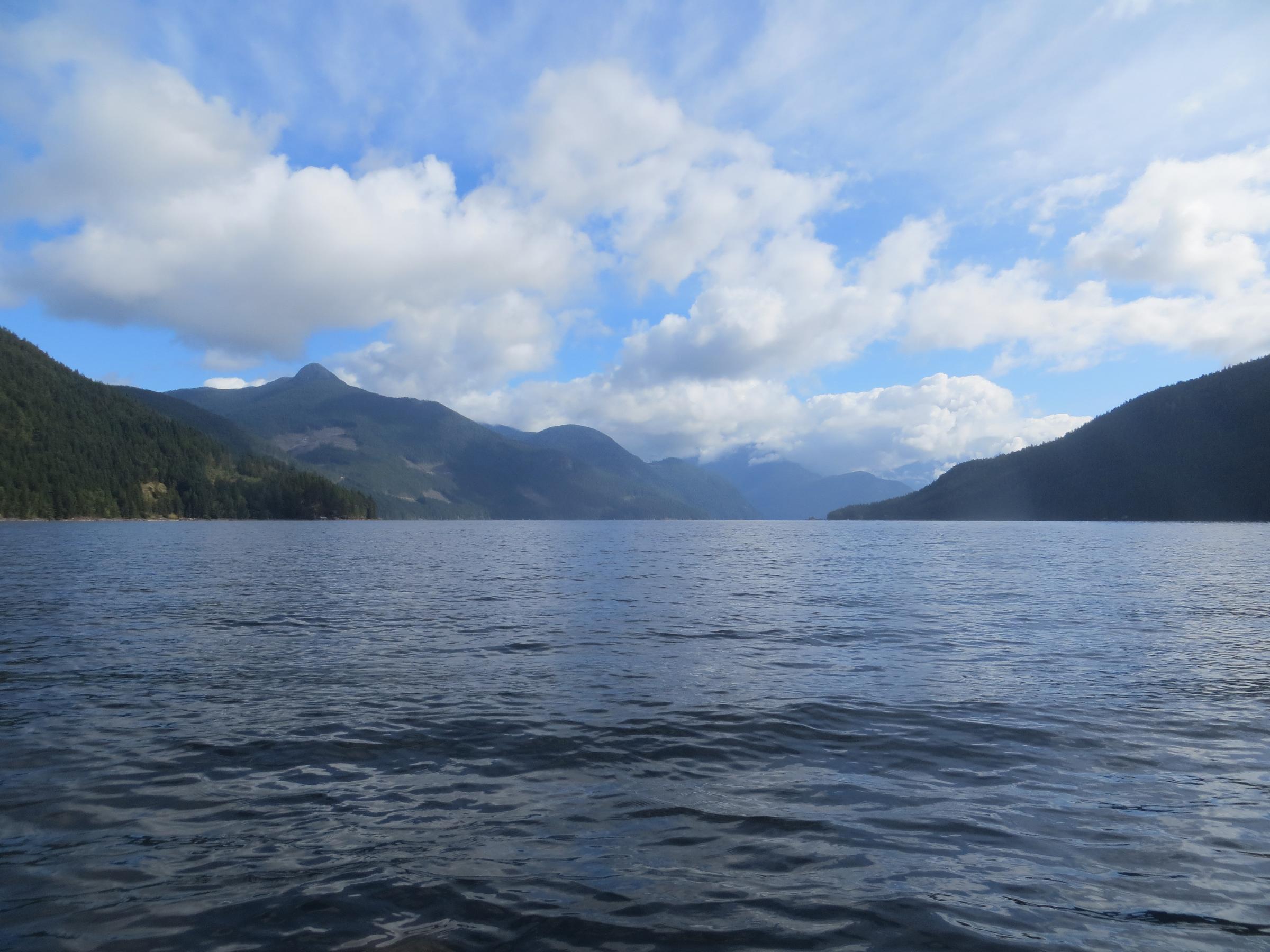