Trip Type: Paddling Canoe
Entry Date: 09/14/2016
Entry & Exit Point: Quetico
Number of Days: 10
Group Size: 1
Trip Introduction:
Bunked at Canoe Country Outfitters in Ely, MN the night before. (They were full up and it was a little noisy off and on.) Got an early tow from CCO's base on Moose Lake. Going very lightweight this time. No Granite Gear or Kondos packs. I know it's blasphemy, but if I take them I tend to fill them. Taking a 2#14oz. solo tent for the first time, and using my 65L Kelty backpack and a small camo Fieldline for the kitchen stuff.
Discuss Trip: View Discussion Thread (17 messages)
Report
Wednesday, September 14, 2016 Weather fair, 38 degrees at sunup. Mike towed me up Moose, Newfound and Sucker lakes to the Canadian border. Saw only one other tow working. Checked in at the Ranger's and headed west at 9:30. Clear skies and only a "nuisance" breeze on Inlet and Bayley Bays. Stopped around Green Island for a bagel with PB snack. Had to tack a little bit on the way to the Yellow Brick Road portage's beautiful beach. YBR portage was not hard, but not as "flat" as I had heard and not really that wide in places either.
Burke Lake looked very inviting as I made my way across the lee west shore. Water was obviously low at the take-out, and in the riverine water beyond. Two beaver dams were not a problem to negotiate (one was hardly a dam at all) and the next take-out was rocky with the low water level. The portage to North Bay was a rock garden at each end and some in the middle, but at least it was fairly dry. The NB end was a mess! (Low. Mud.) Glad it was cool this morning.

Ate some snacks on the portage (I double portaged today) and once I was paddling again I noticed one campsite occupied on an island near the portage. Had a funny cross/tailwind to contend with as I made my way N/NE to the area with several campsites near the outlet to South lake. (Saw a non-rated campsite on the way that was definitely useable but it looked pretty slopey and shady. Landed at an open "3-star" site about 2:30 and called it "home." (5 hours, seemed longer)

Spilled my first bucket of water I got before landing and had to get another. (Getting dysfunctional because of all this work?) Got the tent up in the cedars away from a solitary widow-maker. (Big tree damage behind the camp area!) Beef stroganoff for supper about 4:30, then a half bagel/PB "dessert." SPOT "okay" sent. Saw about 7 people today, including 2 fishing near camp around 5:30. A great day in Quetico! (Cool, clear and breezy between supper and tent time. No bugs.) 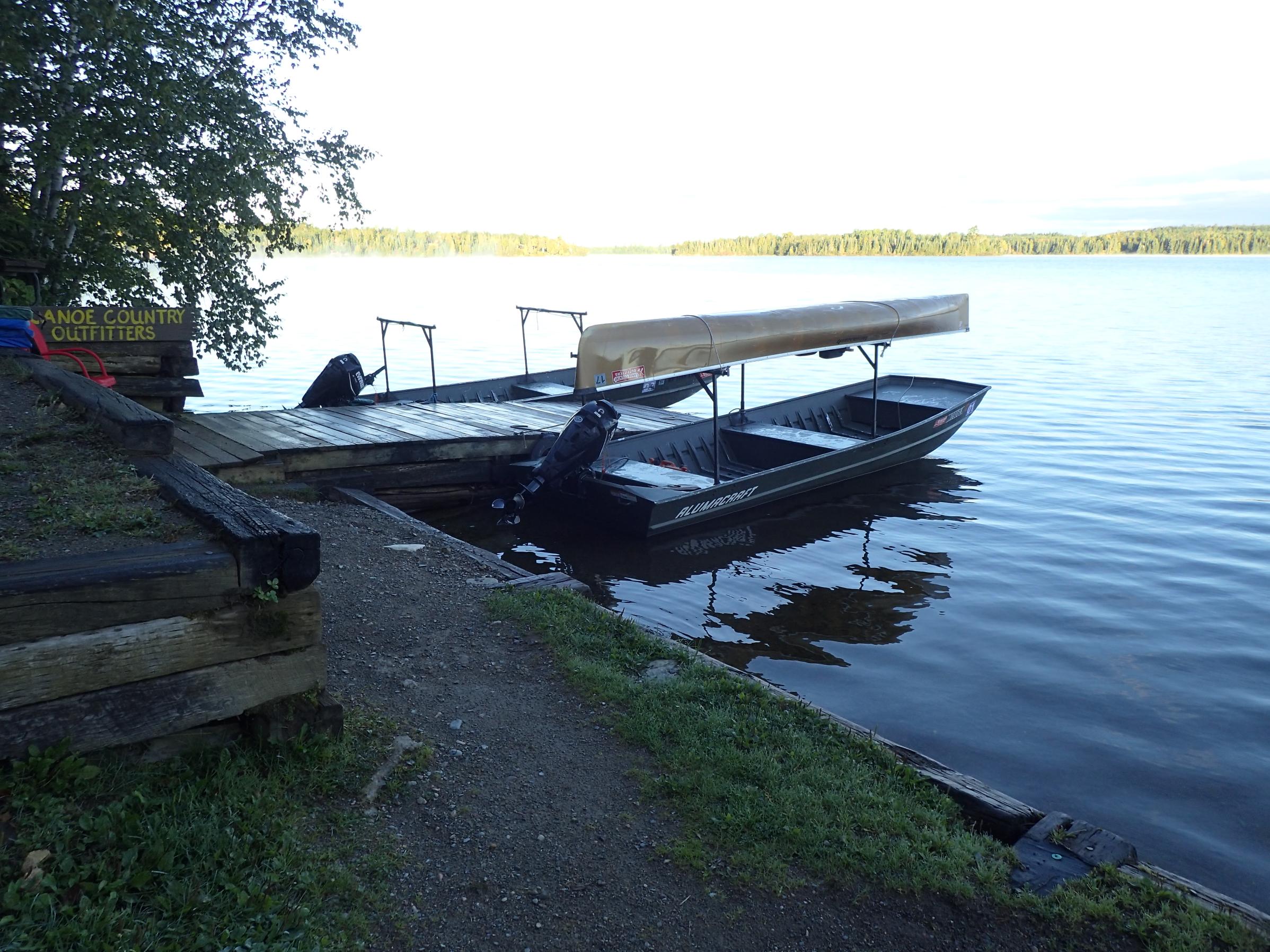 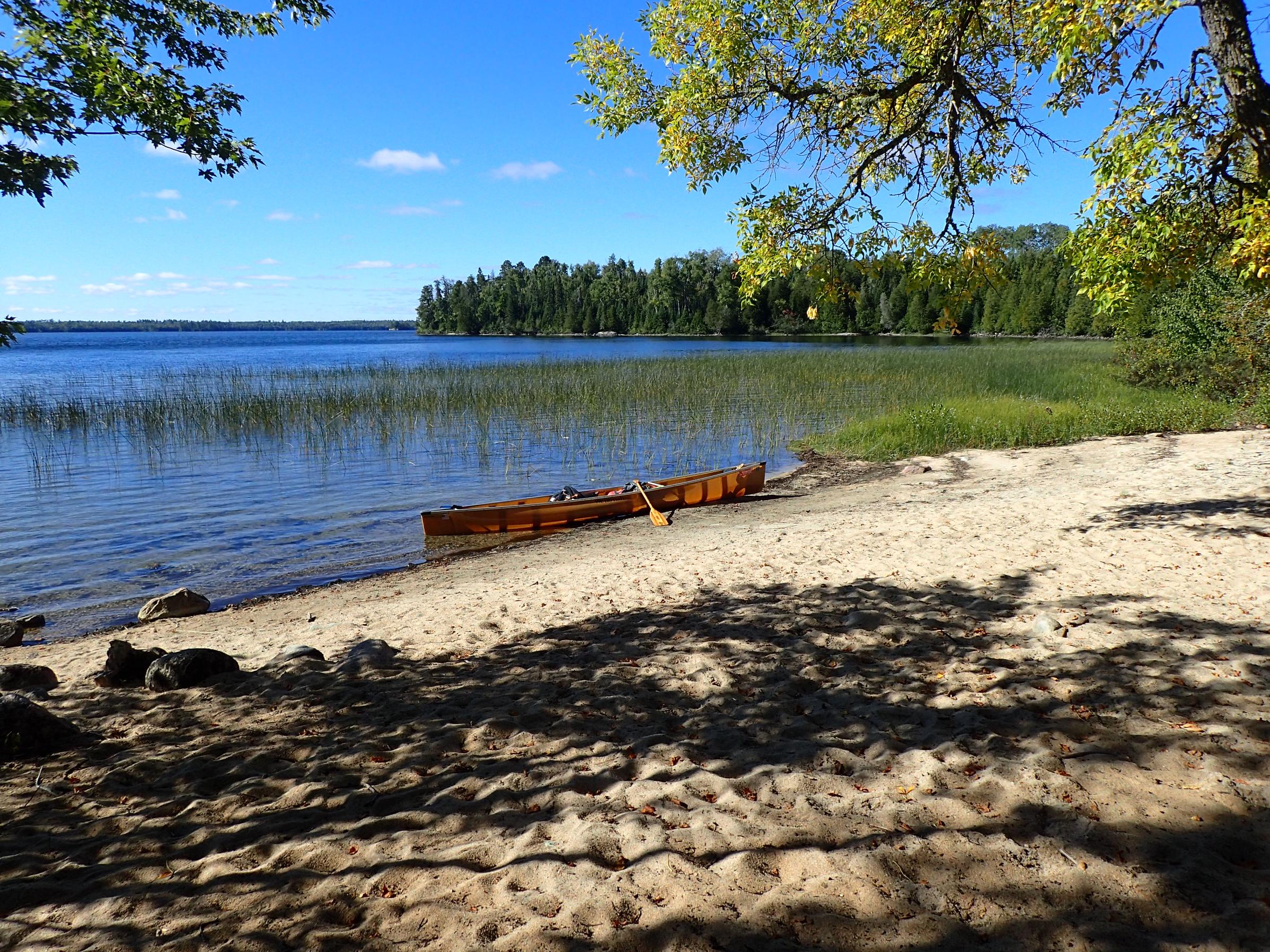 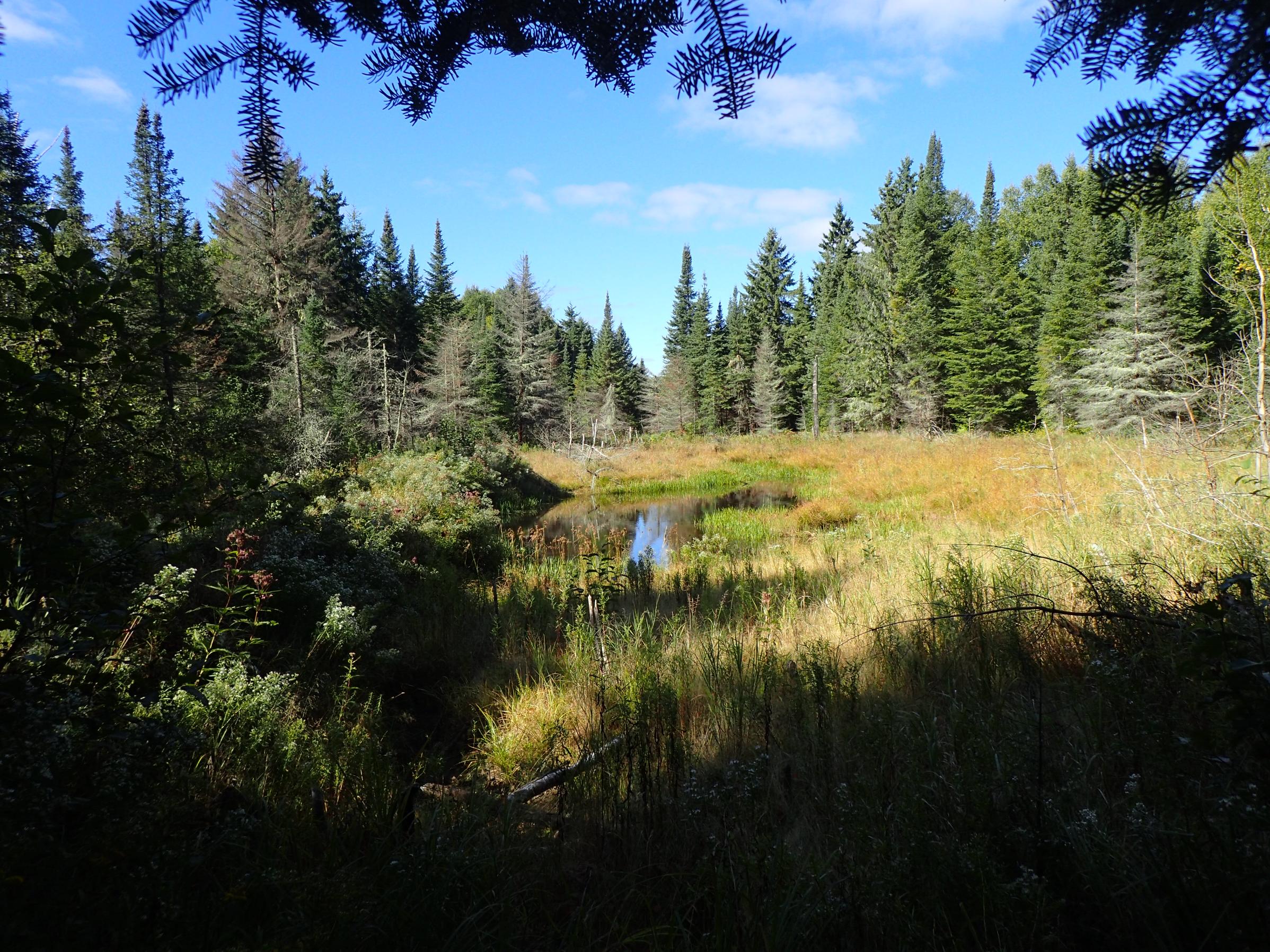 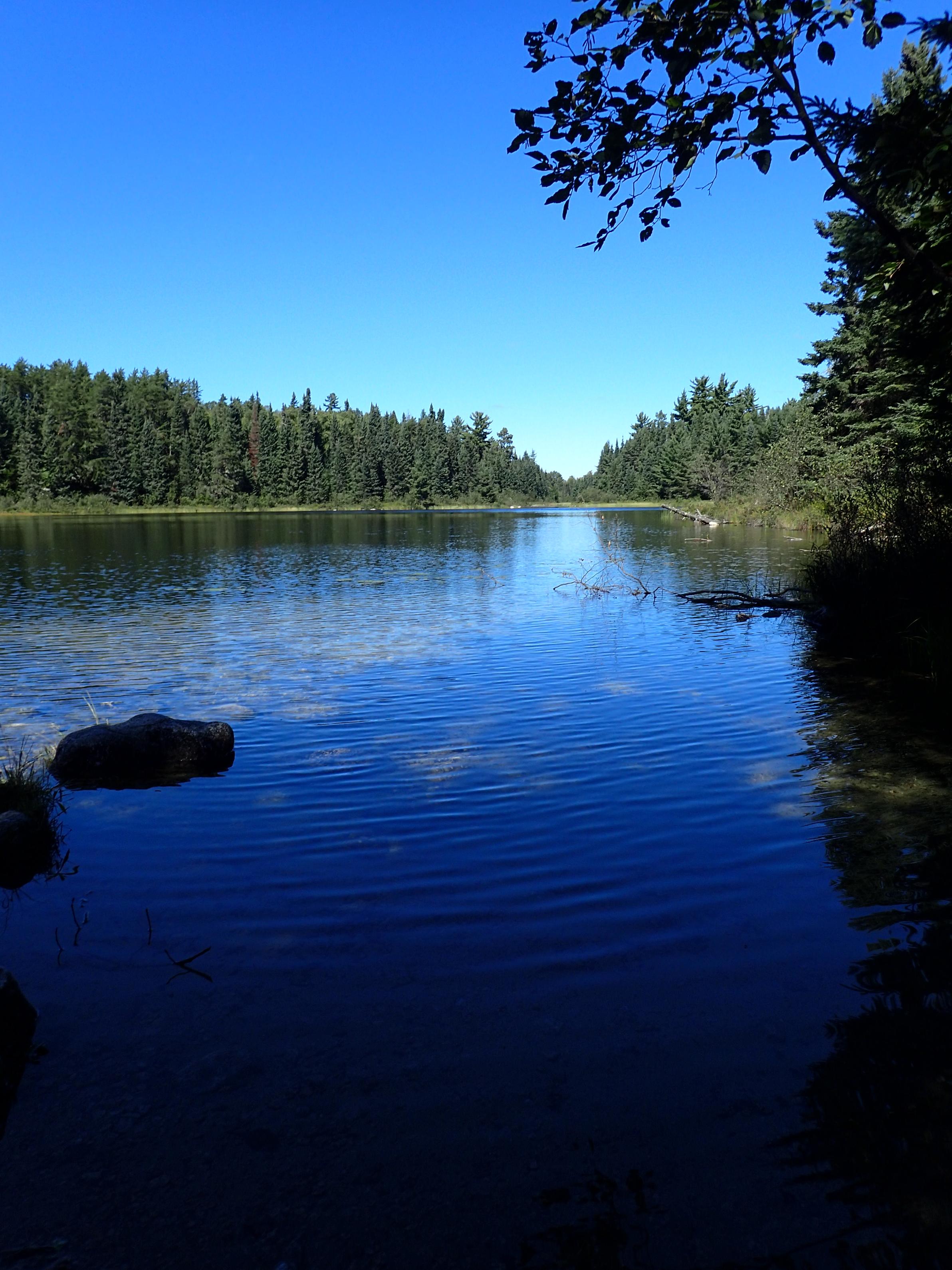 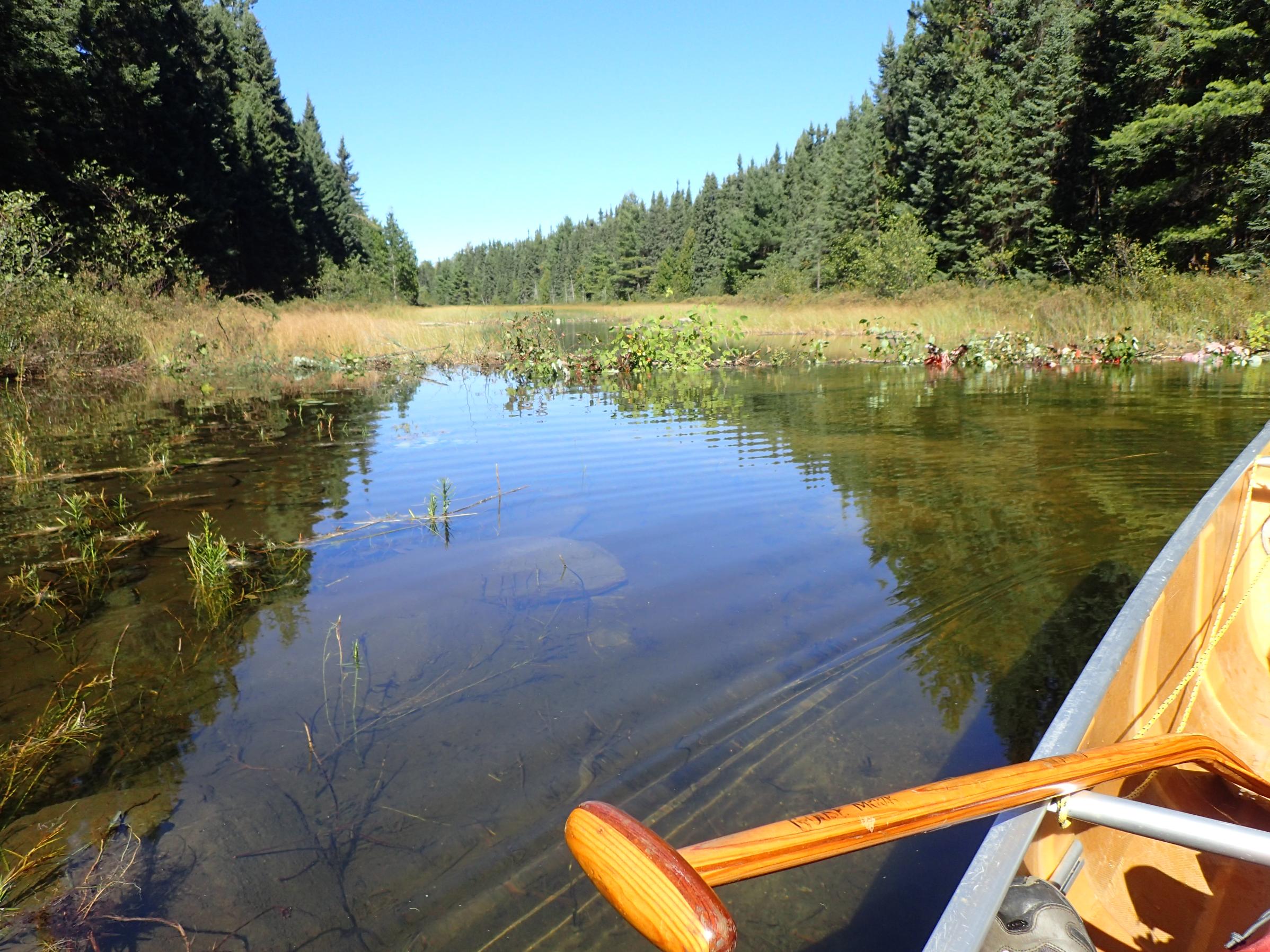 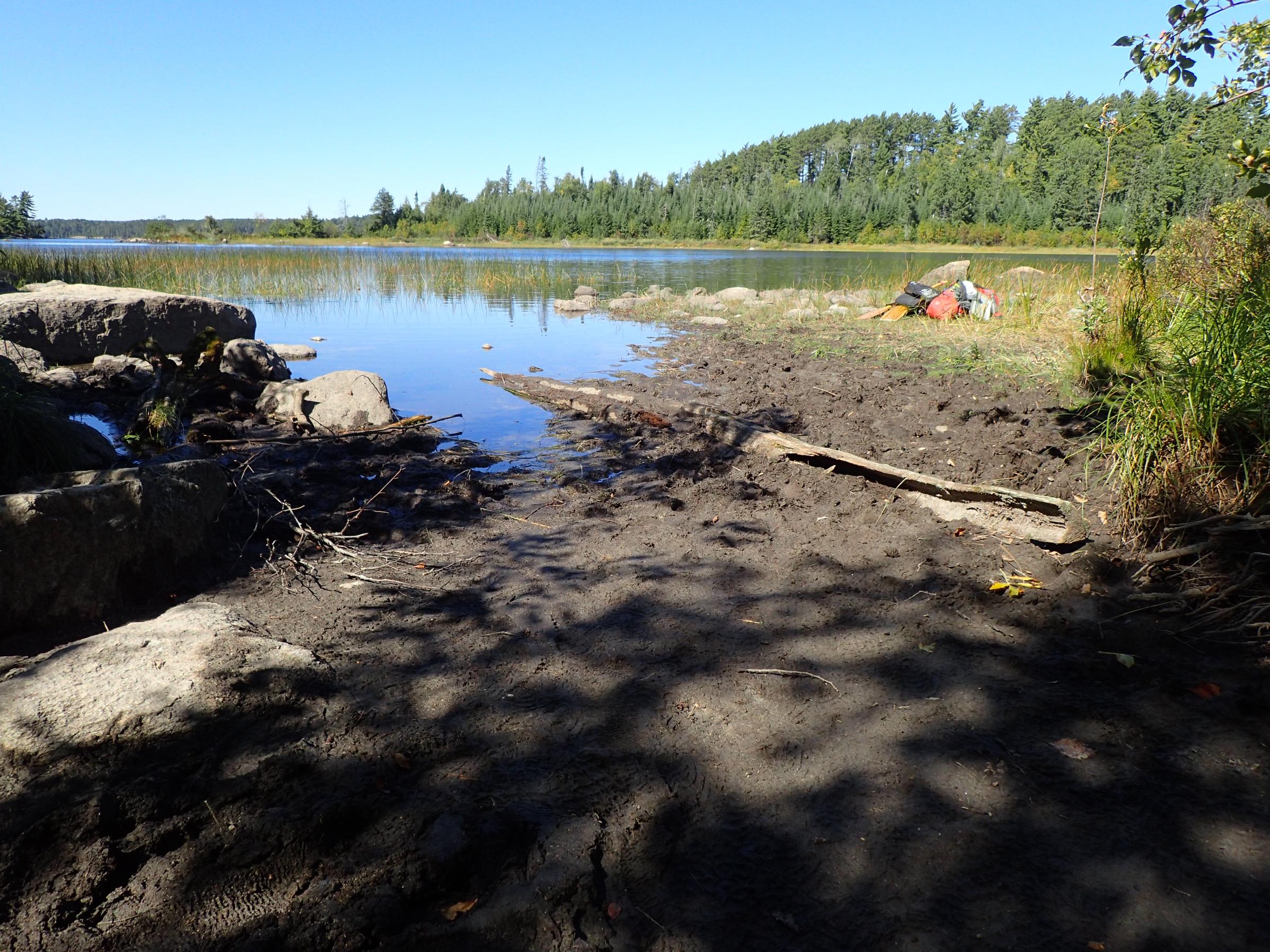 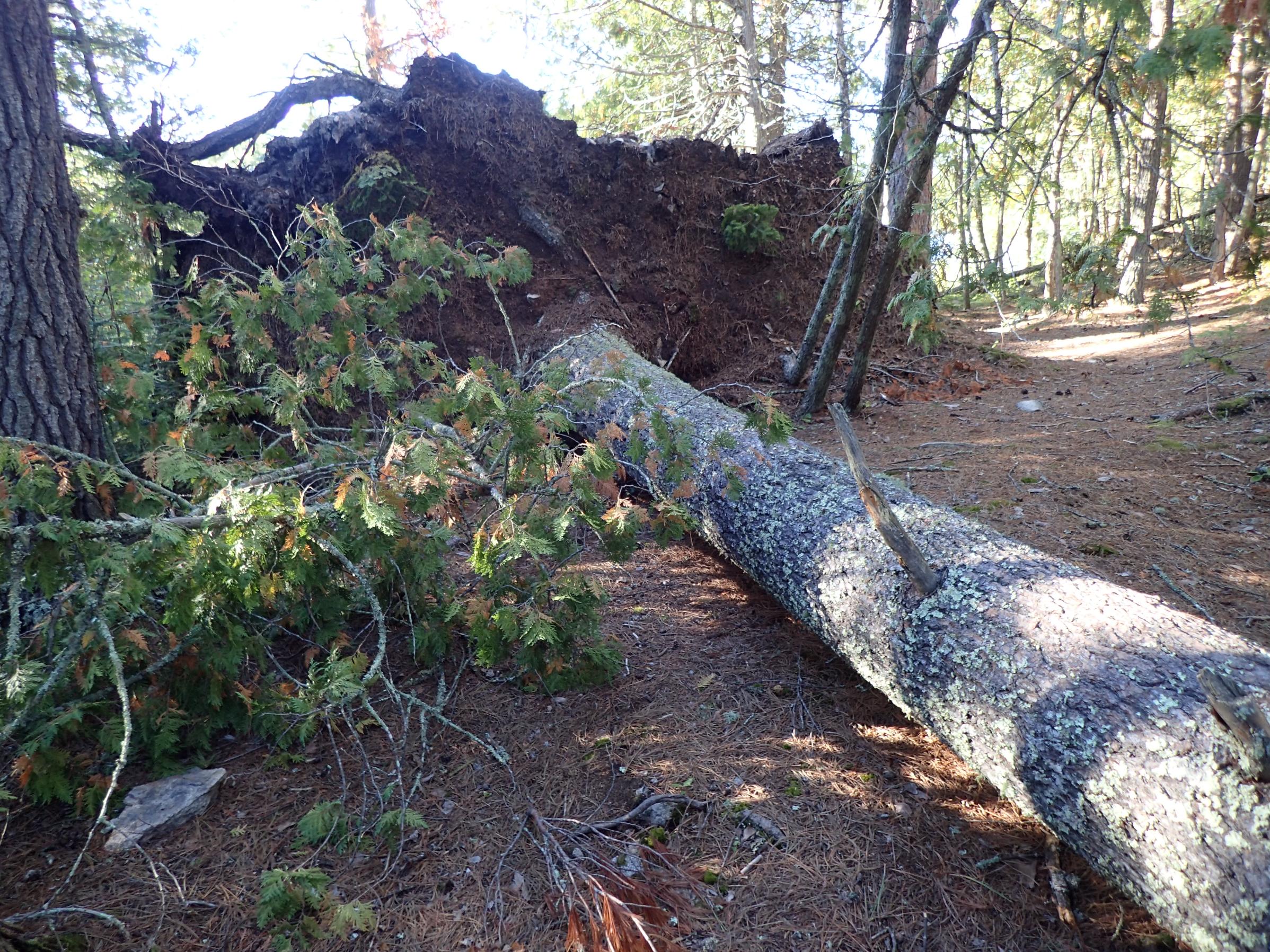 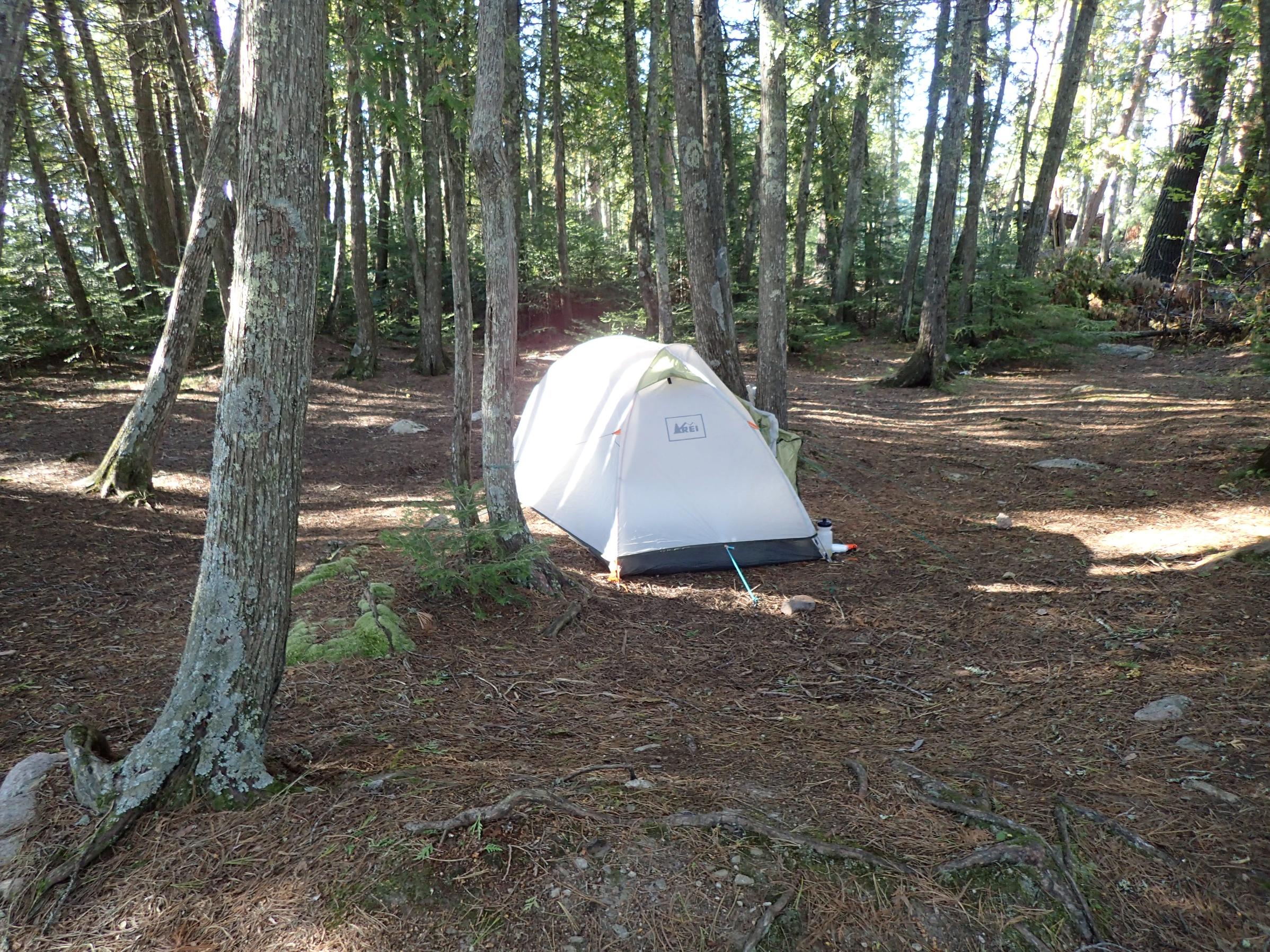 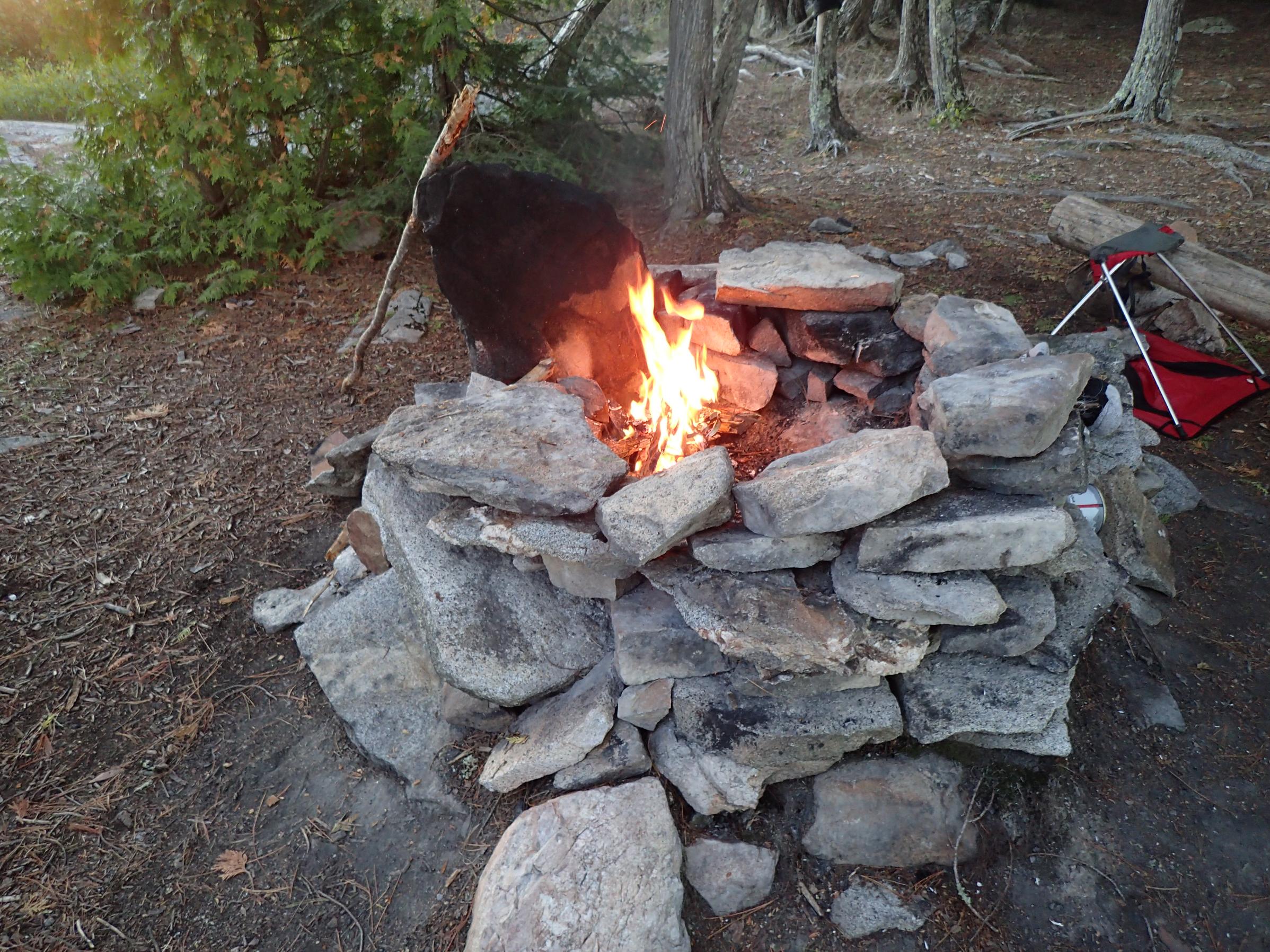 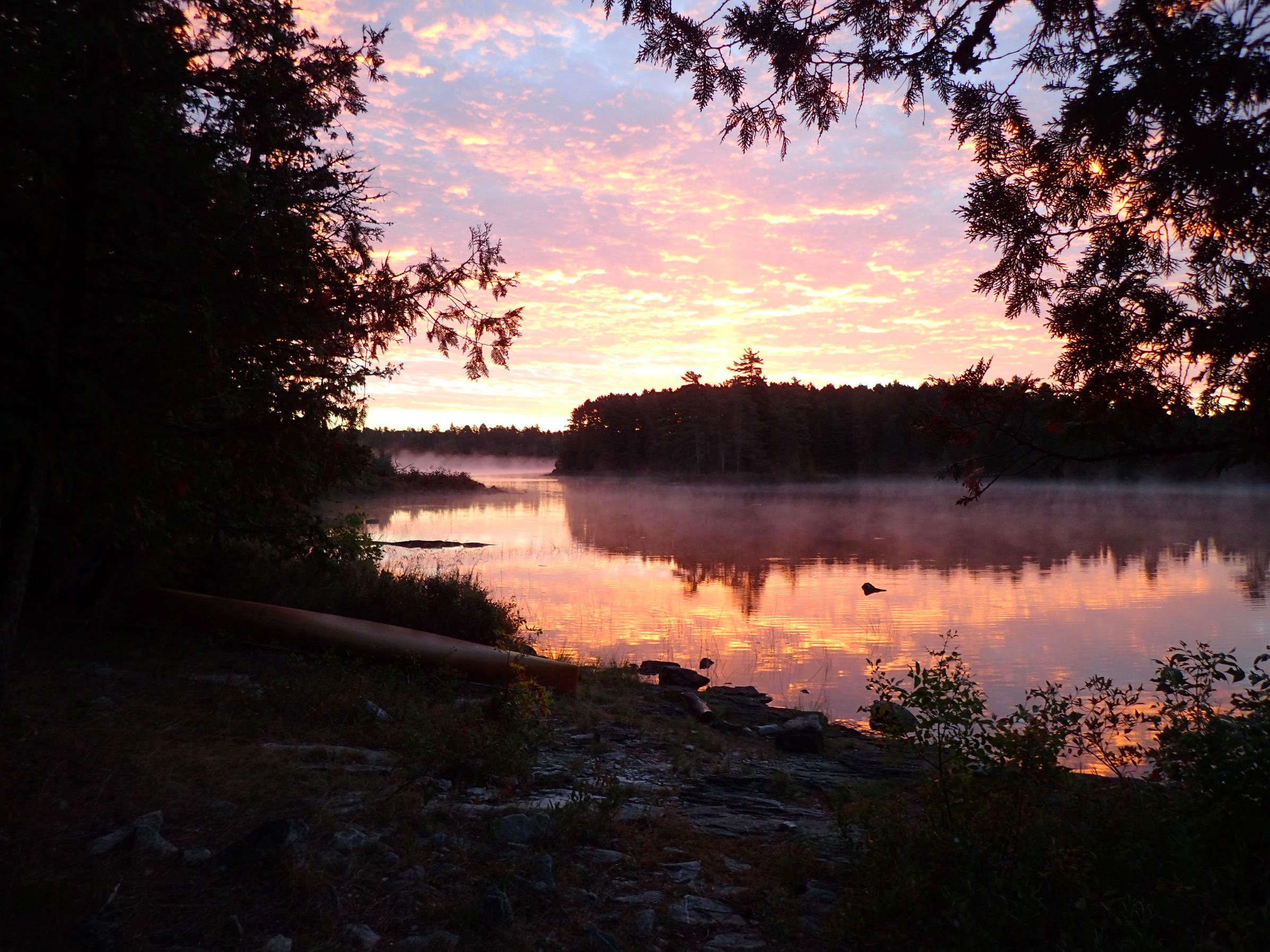