Trip Type: Paddling Canoe
Entry Date: 07/07/2016
Entry & Exit Point: Little Isabella River (EP 75)
Number of Days: 4
Group Size: 5
Trip Introduction:
This was a trip Vickie & I had planned to do in the fall of 2011. Of course at that time the massive Pagami Creek fire had just drawn to a close and, consequently, the area was closed. We wound up going in at Moose River South (EP #8) and having an absolutely wonderful trip; which still ranks among our all-time favorite trips. Still, this trip has been in the back of our minds ever since. Wanting a short, easy trip that could still offer the opportunity of getting away from it all (on what promised to be a busy Fourth of July weekend) we finally opt to give this area a try. Enlisting the help of my brother (Uncle Clay) and our friend Dan, the five of us escaped to this recently traumatized region for a short vacation.
Discuss Trip: View Discussion Thread (9 messages)
Day 1 of 4
Thursday, July 07, 2016

Spirit of the Wilderness has been our go to outfitter on the Ely side for many years and they get us off in their usual fine fashion once again this trip. We motor east down highway 1, then north up the Tomahawk Road, and finally winding our way down the narrow spur road to the Little Isabella River EP landing. There isn't exactly a lot of extra space here, perhaps room for a half dozen tightly parked vehicles & very little area for maneuvering. We decide to get our vehicles pointing out, so we don't end up having to back out a long distance if other group(s) show up later. 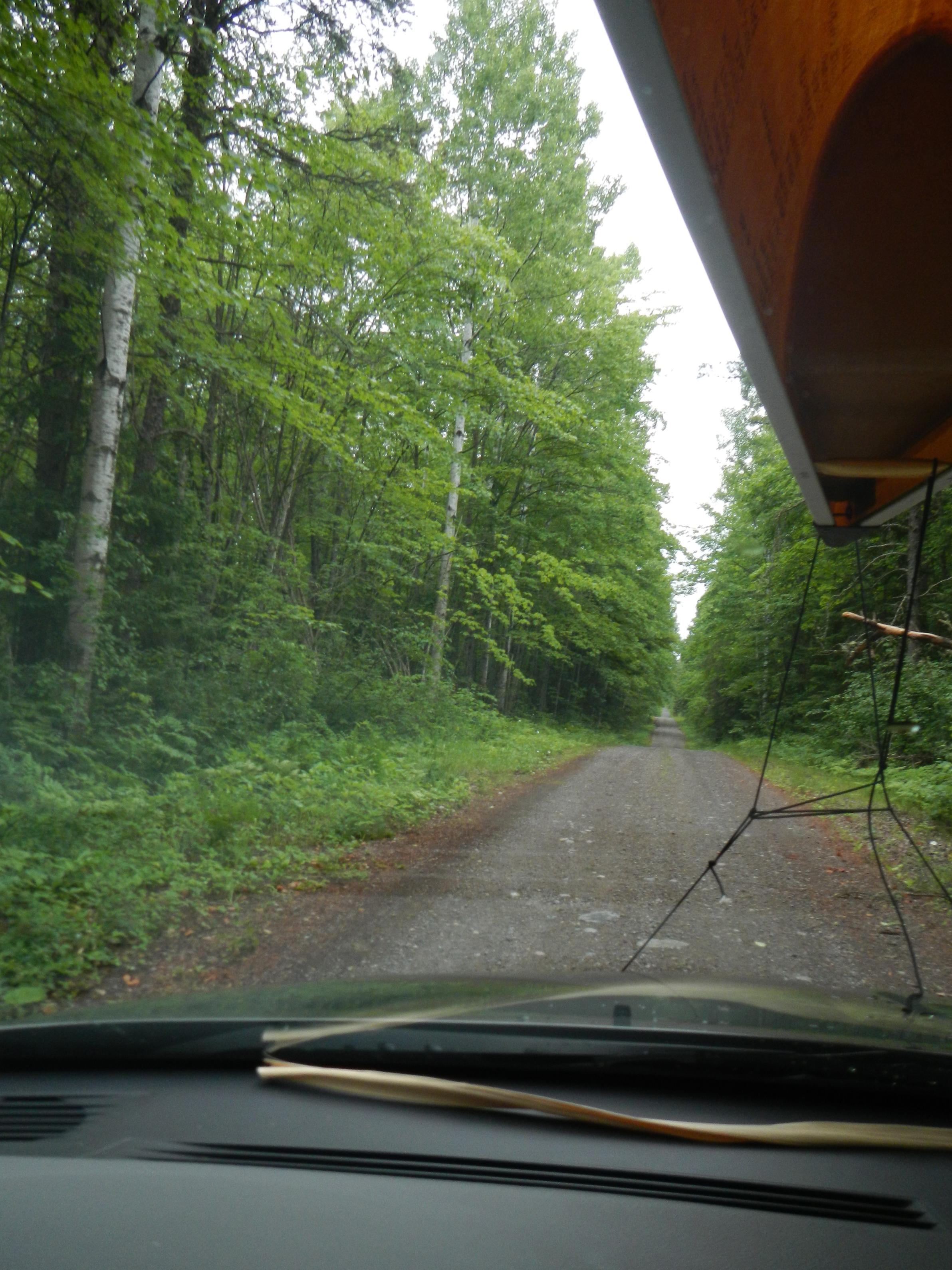 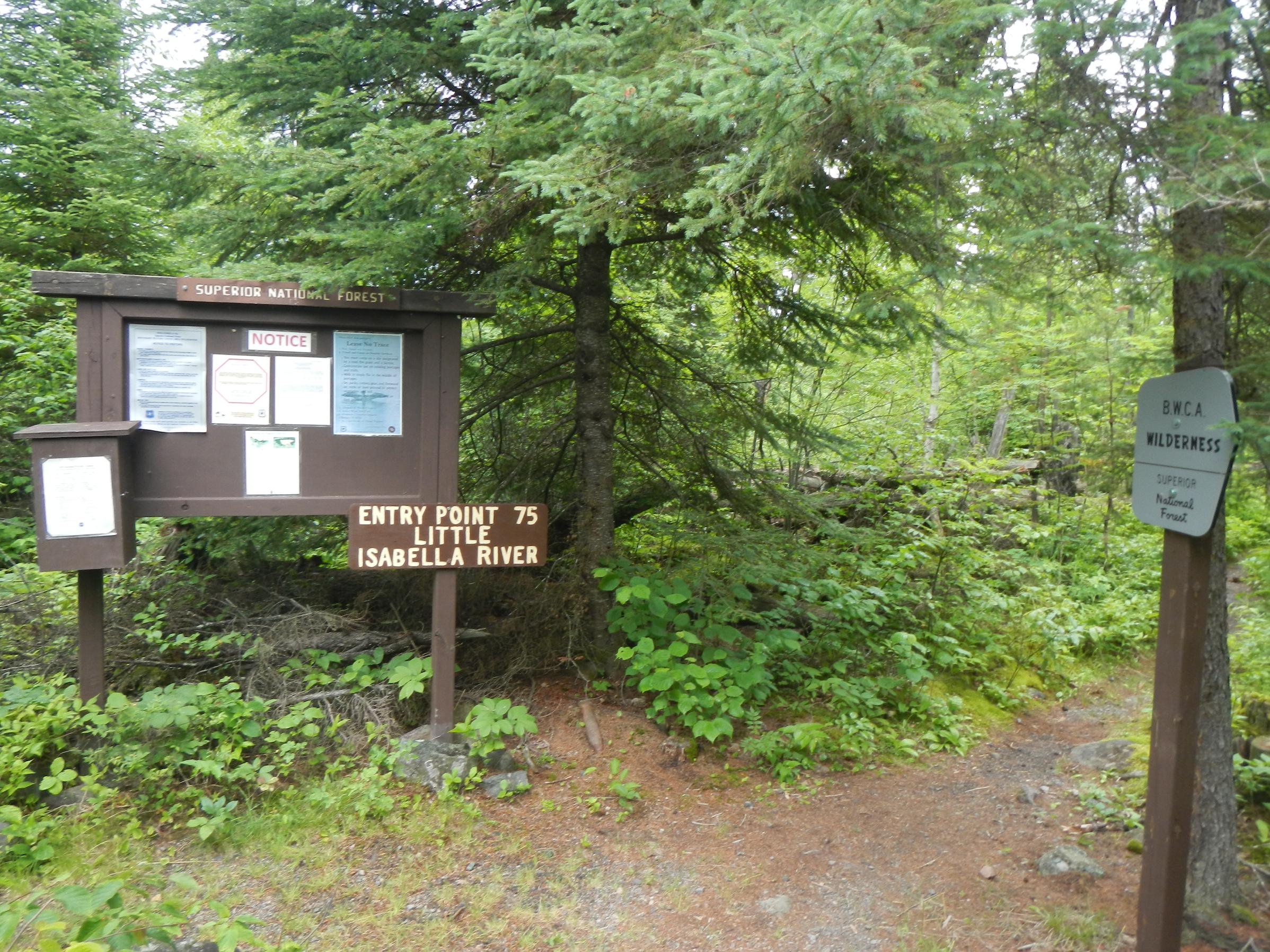 As expected, the trail down to the river is well worn but, a little rocky. Encouragingly, I find a few ripe blueberries along the way. The landing is constricted but, soon enough we are on the water winding our way down the river. There is a large downed tree across the path very near the landing of the first portage which makes this one more of a chore. Later, a jack pine stretches precariously across the length of the river forcing us to warily paddle under & through this natural impediment. Our next portage is a bit longer (32 rods) and offers a moderate climb, the following 16 rod trail is flat but, the downstream landing sports a few cumbersome boulders that prove problematic as Vickie ends up a little wetter than she would've hoped. 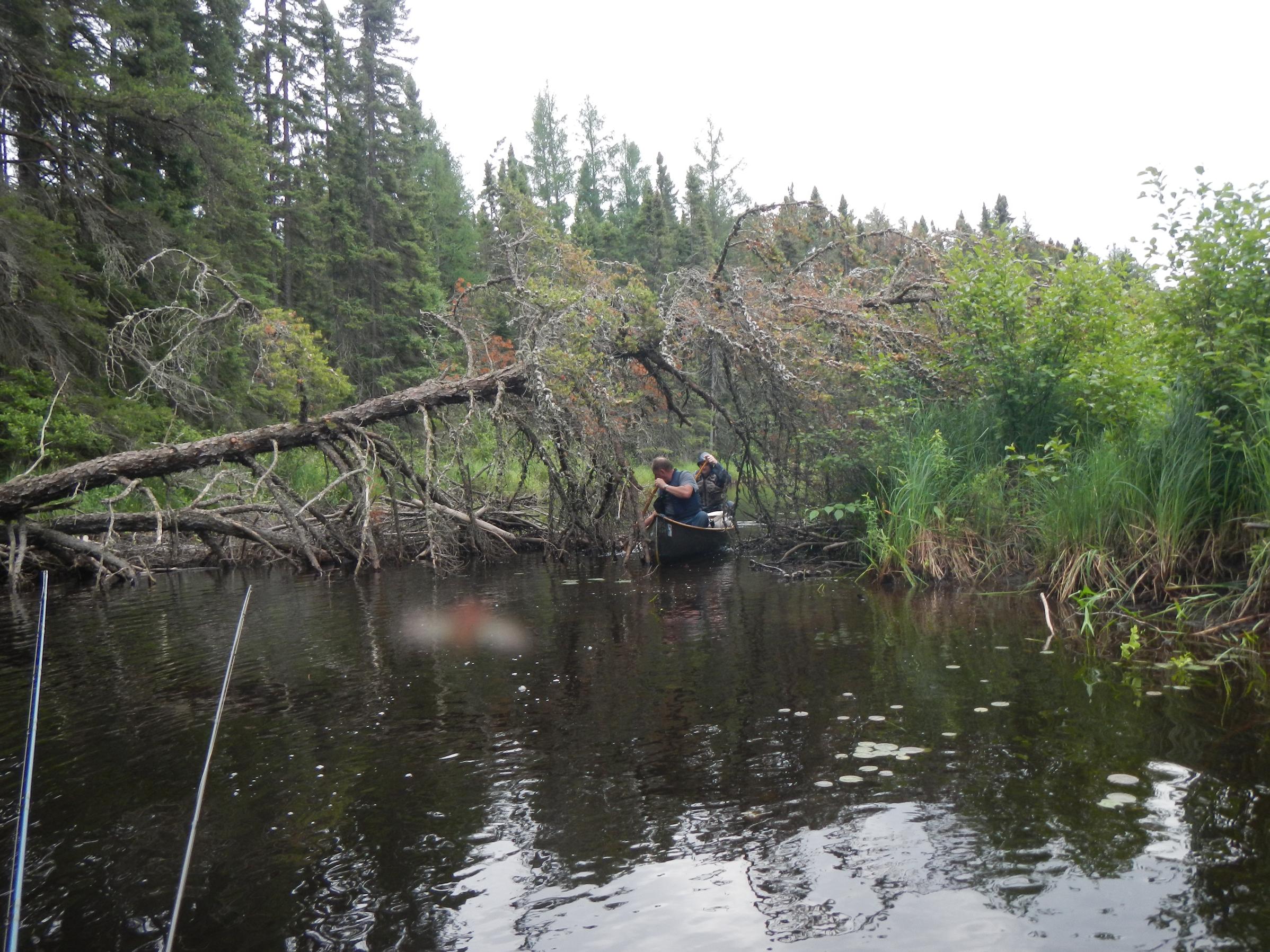 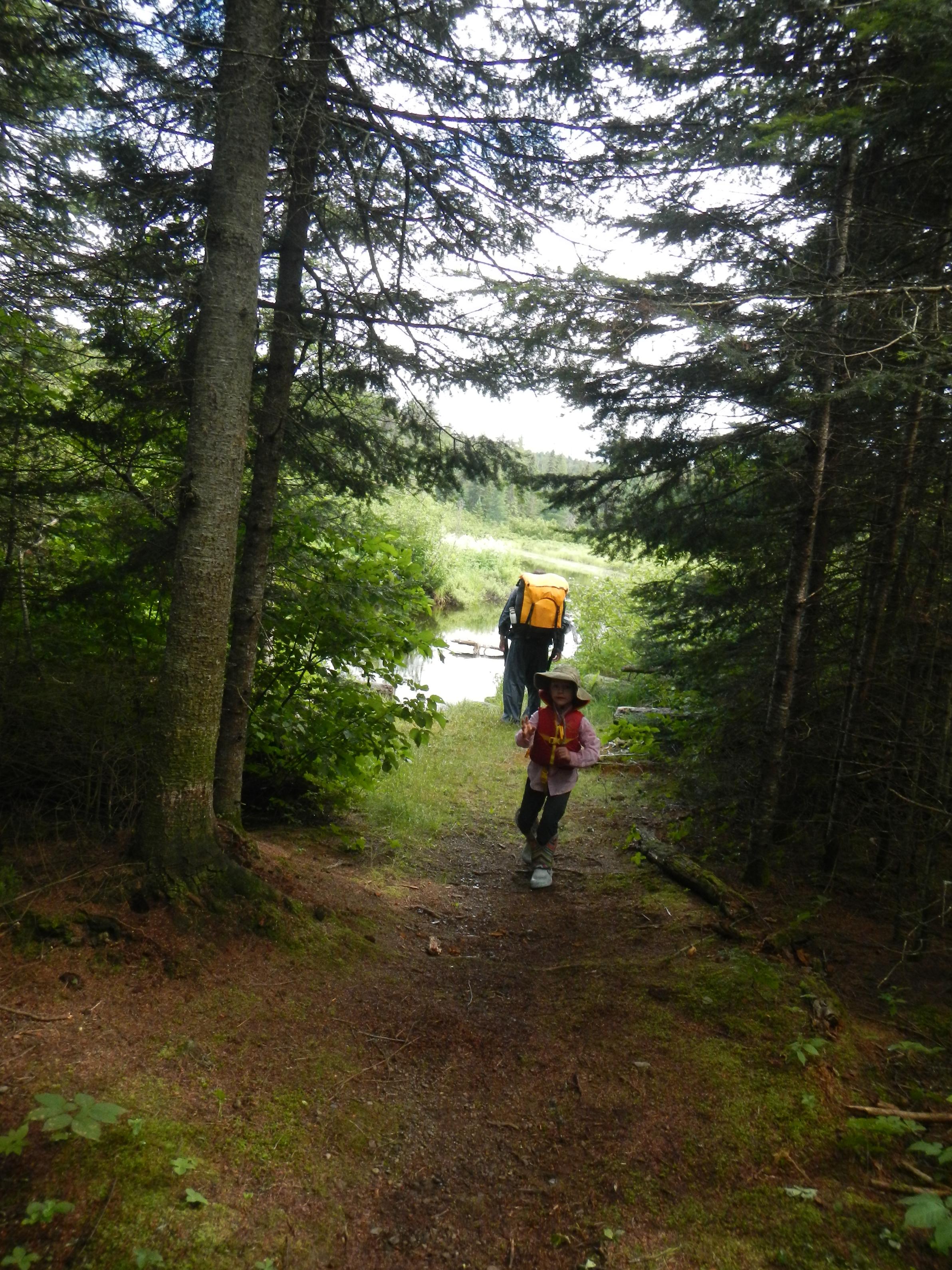 Before reaching the Isabella River, there is a large expanse of wild rice to paddle through. Fortunately there is a narrow channel leading to the big river. Once out on the Isabella we instantly encounter the first dramatic evidence of the Pagami Creek fire on the north shore of the river. From here on, mature 'green' trees will be few and far between. As we paddle up river, the areas of swift water prove to be fairly shallow. We are able to paddle through them but, do end up scraping our canoes a little. The portage to our hopeful final destination (Quadga Lake) begins at the base of a scenic set of impassable rapids, of which there are portages around on both sides of the river. 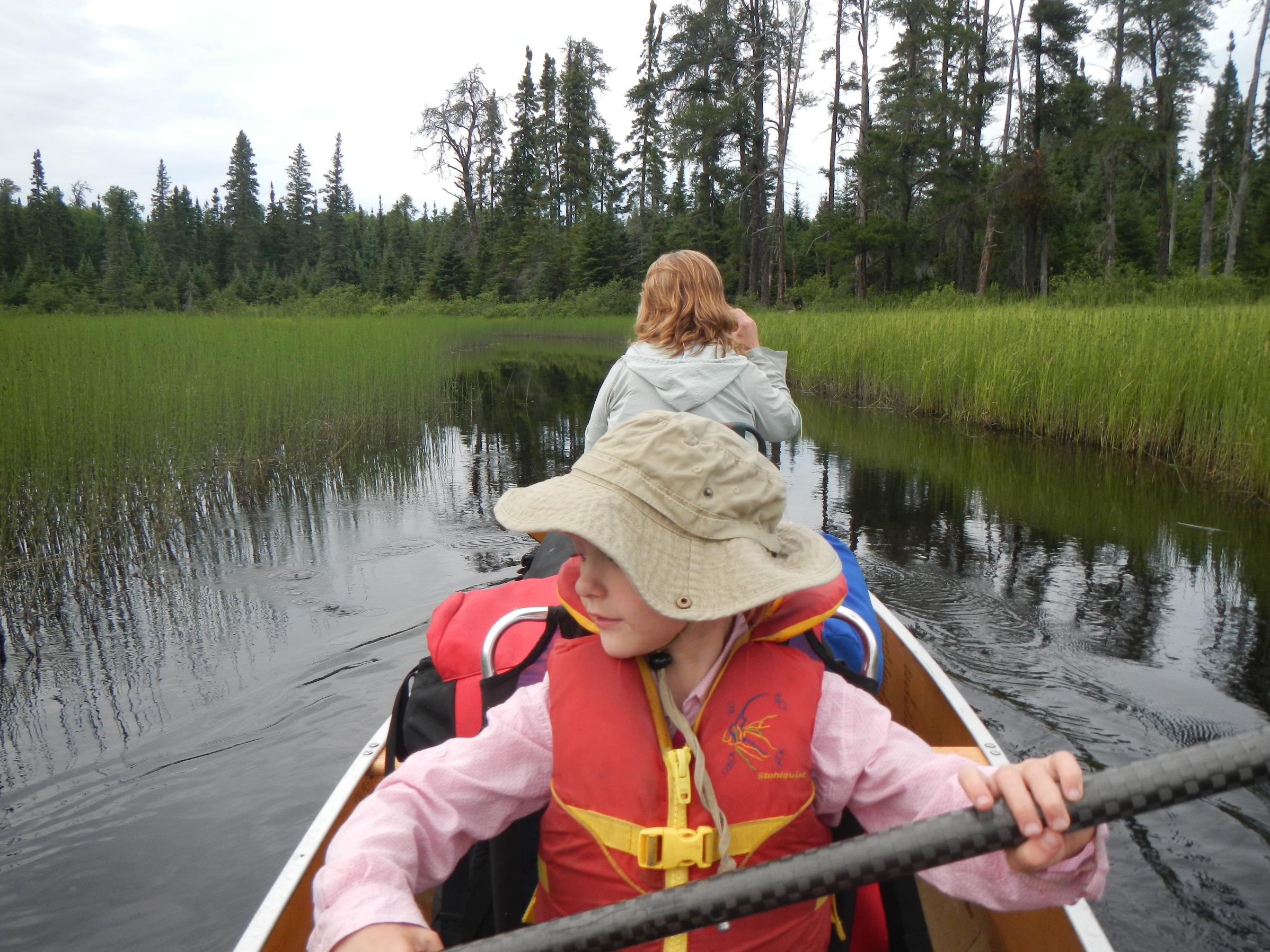 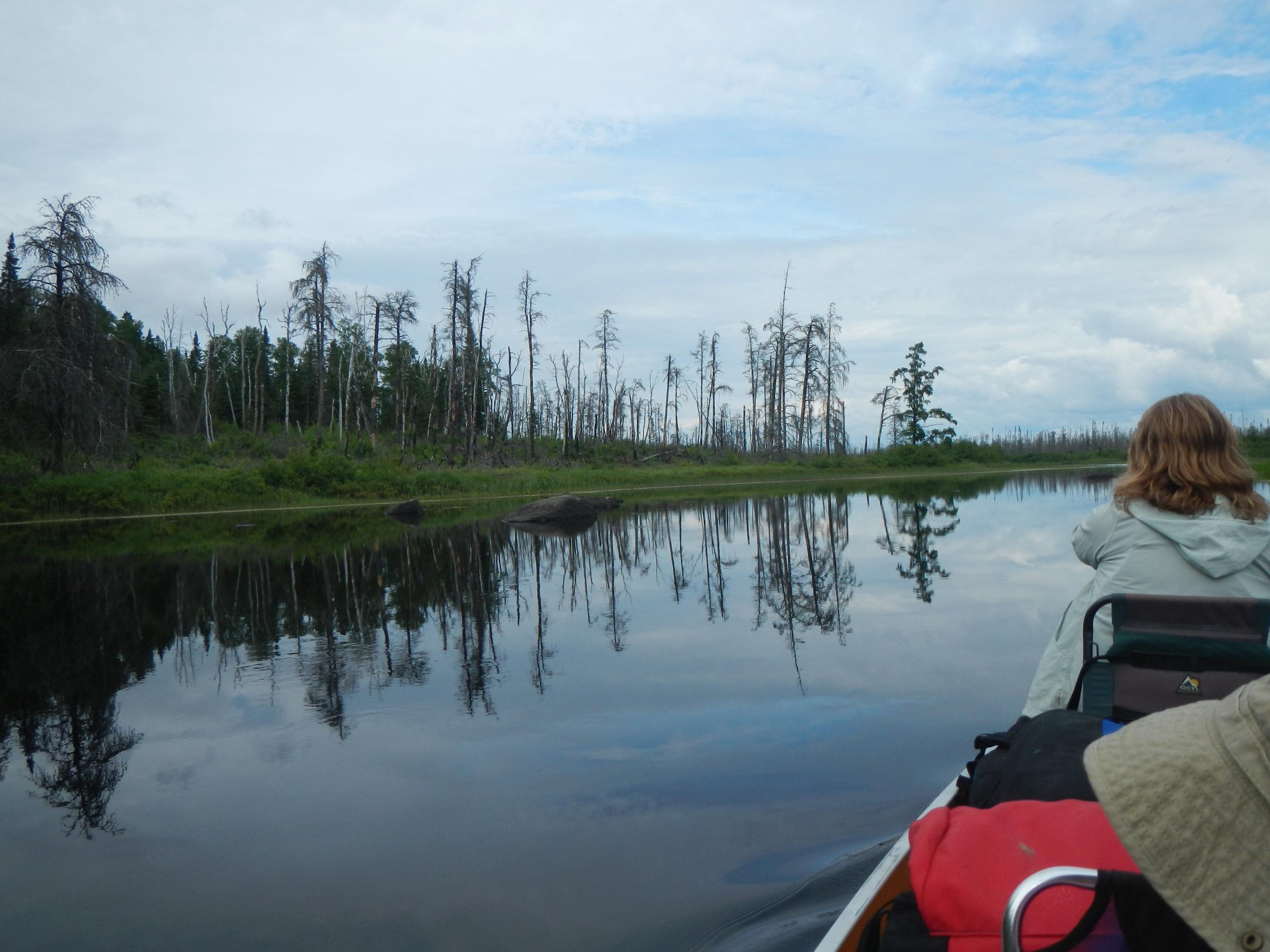 A narrow, but adequate, rock ledge serves as the landing here. The trail climbs up to a decent overlook of the Isabella River. Along the way to an unoccupied Quadga Lake there are a few downed trees to crawl over/around, and while the blueberries appear to need another week or so; there is an abundance of ripe strawberries just off the path. It's been gray & gloomy all day but, the clouds now seem to be getting even darker and the wind is picking up; so we hastily paddle over and claim the site in the SE corner of this diminutive isolated lake. 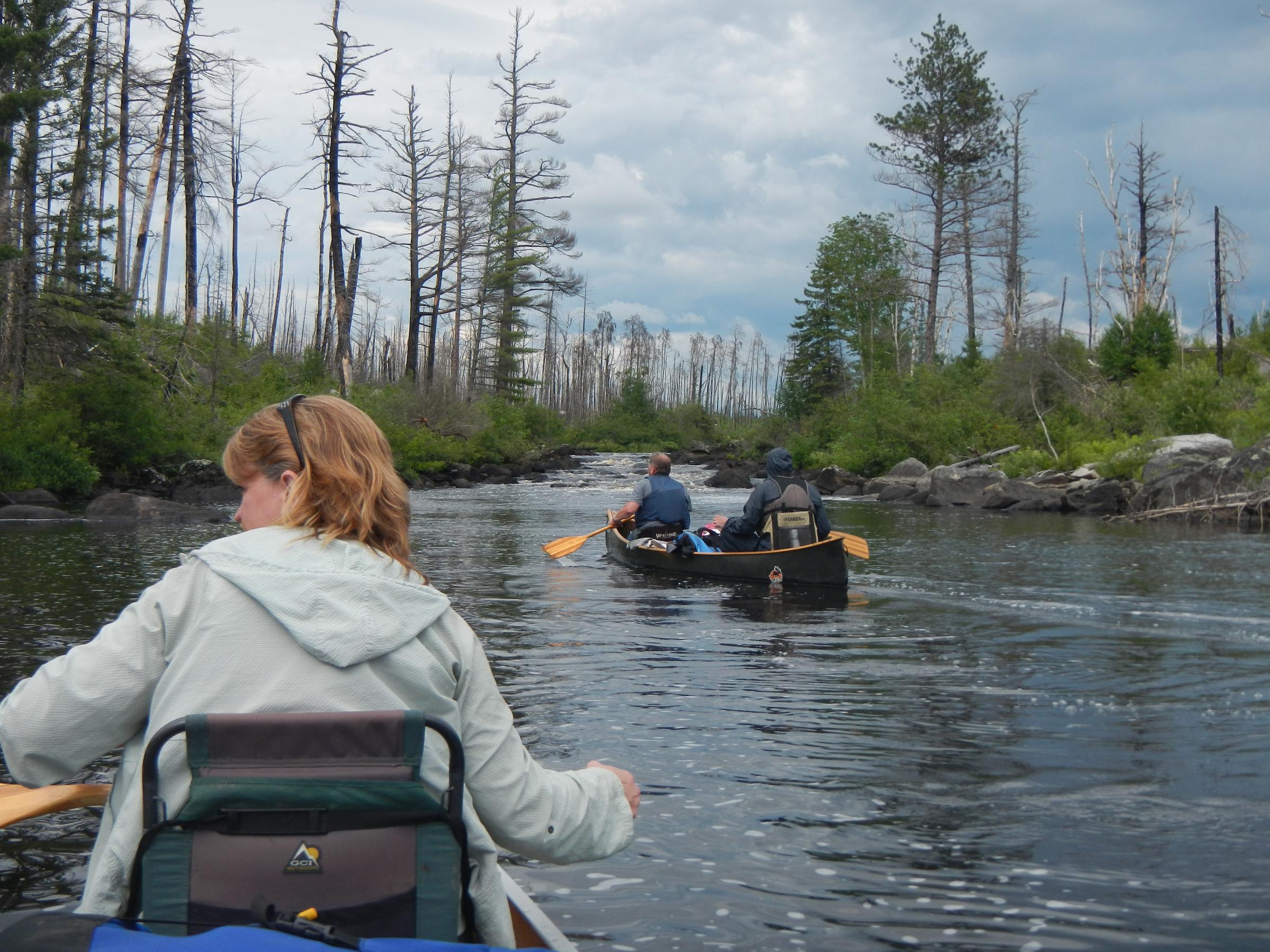 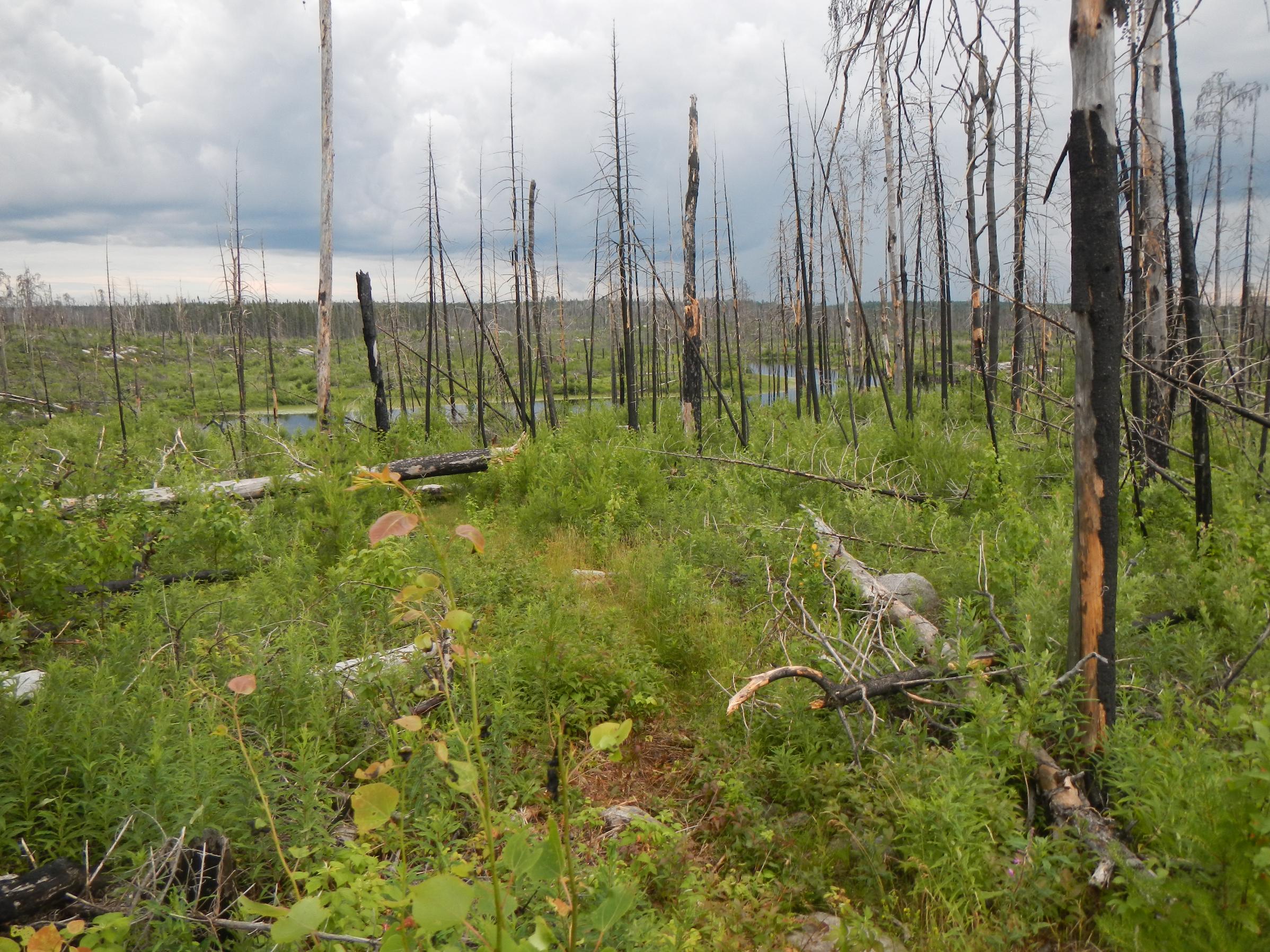 Fortunately we dodge the rain for awhile and are able to get this largely unsheltered camp setup without the everything getting soaked. While exploring around the perimeter shortly afterwards, Uncle Clay happens upon an interesting find. It's a mud turtle shell that he gives to an enthralled Aurora. Later, shore fishing produces some action in the way of northern pike. As night begins to fall the rain finally lets loose. Uncle Clay & Dan have a less than stellar night of sleep as they find out, the hard way, why Dan got such a great deal on his tent. At least they 'mostly' stay dry. 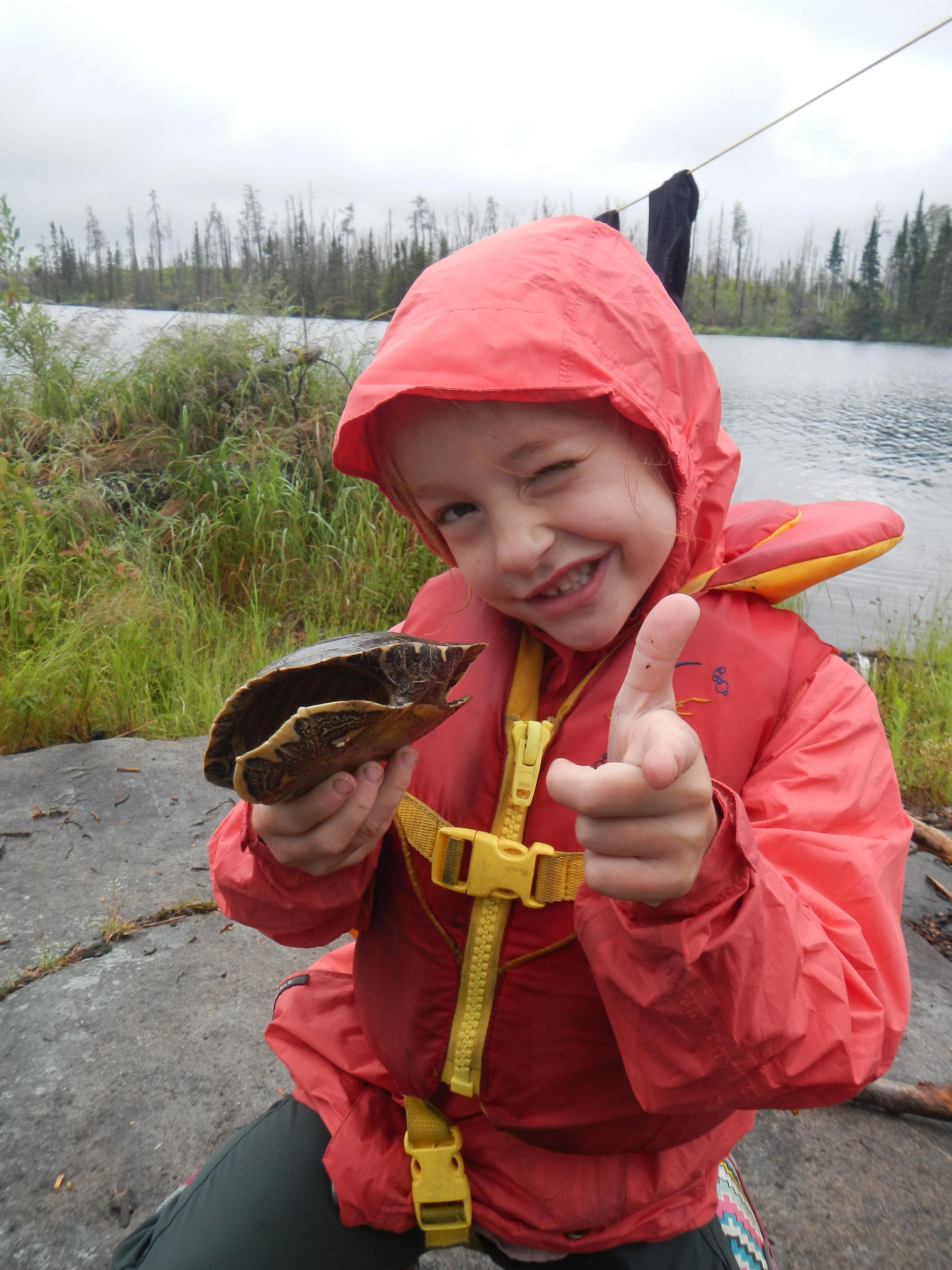 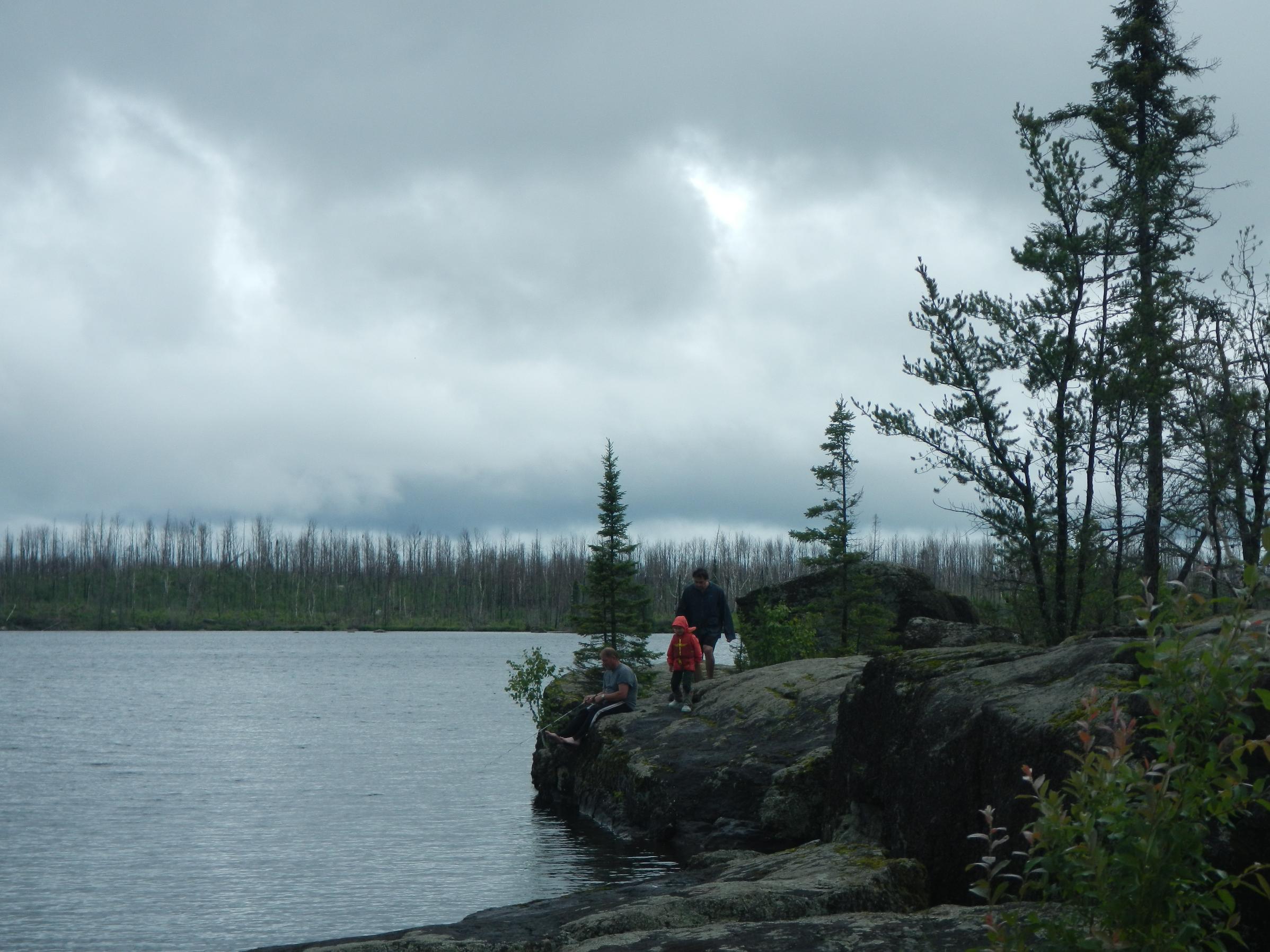