Trip Type: Paddling Canoe
Entry Date: 08/27/2015
Entry & Exit Point: Moose/Portage River (north) (EP 16)
Number of Days: 9
Group Size: 2
Discuss Trip: View Discussion Thread (14 messages)
Part 2 of 10
August 28, 2015 – Day 2 of 9 we awoke at around 6:30, well rested. Once we made it out of the tent, we found that the morning brought us a dense fog, but that did not stop the necessary coffee making process and planning for the day over oatmeal and pop tarts. Elizabeth, being the go-getter, wanted to push through all the way to Iron Lake. I thought it was a lofty goal for a pair of canoeist that had only the previous days experience together, but we decided eat and pack up to see what the day would bring.

We were on the water by 8:30 and did the two portages into Lake Agnes fairly easily. Elizabeth quickly relinquished the canoe carrying duties to me, after the initial 175 rod portage, and she handled the food pack. We had a nice tail wind through Lake Agnes and we were enjoying another warm, beautiful day. The portage out of Lake Agnes into Boulder Bay, lived up to its posted reputation. The Boulder Bay end was very muddy and I was deceived by the look of the trail. It appeared to me that just off the muddy trail was a nice place to walk, however stepping in this area with the canoe, proved to be a mistake. This apparent path was actually a bog and I nearly lost my canoeing water shoe in the process. Elizabeth still to this day, laughs about my difficulties and when I mention the word “portage”, she will immediately say “Do you remember the swamp monster that tried to eat your shoe?...”

Shortly after arriving on Boulder Bay, we were graced with a late morning rain shower, but there was no stopping the progress. We dug out the rain gear and continued on. We decided to take the portage from Boulder Bay to LLC rather than canoeing around. The thought process was our arms were tired and our legs were fresh. We finished the portage and ate a quick lunch by the ranger station. Once we were on LLC, the wind picked up just a bit, and we did a little zig-zagging learning how to work together with a cross wind. We made it to the Bottle Lake portage on the Canadian side and ran into a medium sized group that were outfitted from an LLC outfitter.

My daughter often likes to emulate Jerry Seinfeld and arbitrarily give people or groups nick names. The group that we encountered were wearing very high end clothing and boots, and avoided any sort of mud at all cost. Nothing wrong with renting gear or nice clothes, but this group just looked so out of place and from that moment on, Elizabeth dubbed them the “Richie Rich” guys. We made quick work of Bottle Lake and were on the last portion of our trip for the day, crossing Iron Lake to hopefully get to the well-researched southern island camp site, and hope it was open. We rounded the south end of the island and found camp site #1837 was open, luck has been with us!

We unloaded and got the camp all set up, bear ropes hung, and supper started. As the sun began to set, we could see clouds coming in from the SW and could hear thunder far off in the distance. We got the camp “ready for rain” and headed to the tent once darkness set in. We played some cards and reviewed the eventful day as a complete success. 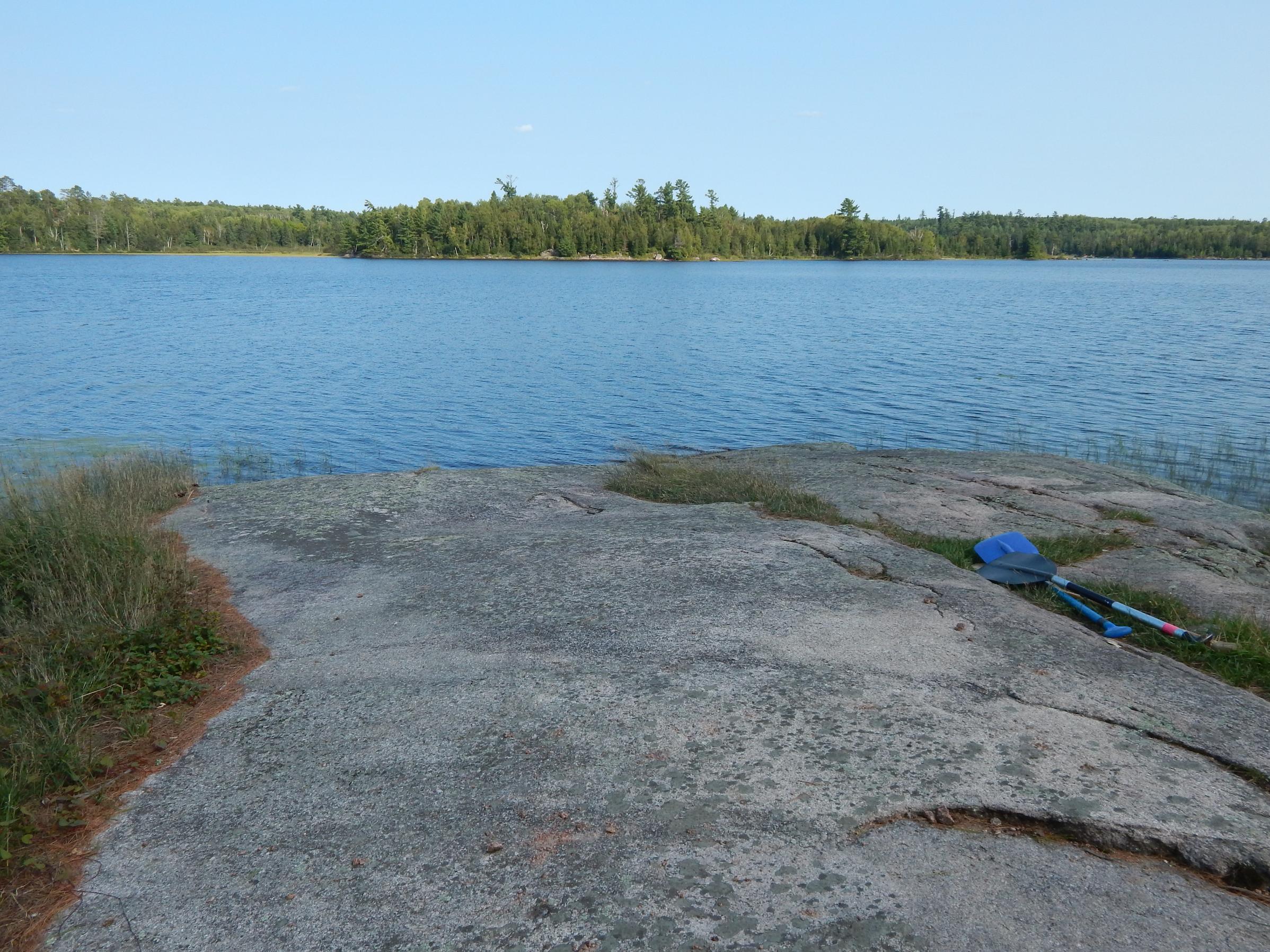 Iron Lake as we entered from Bottle Lake. 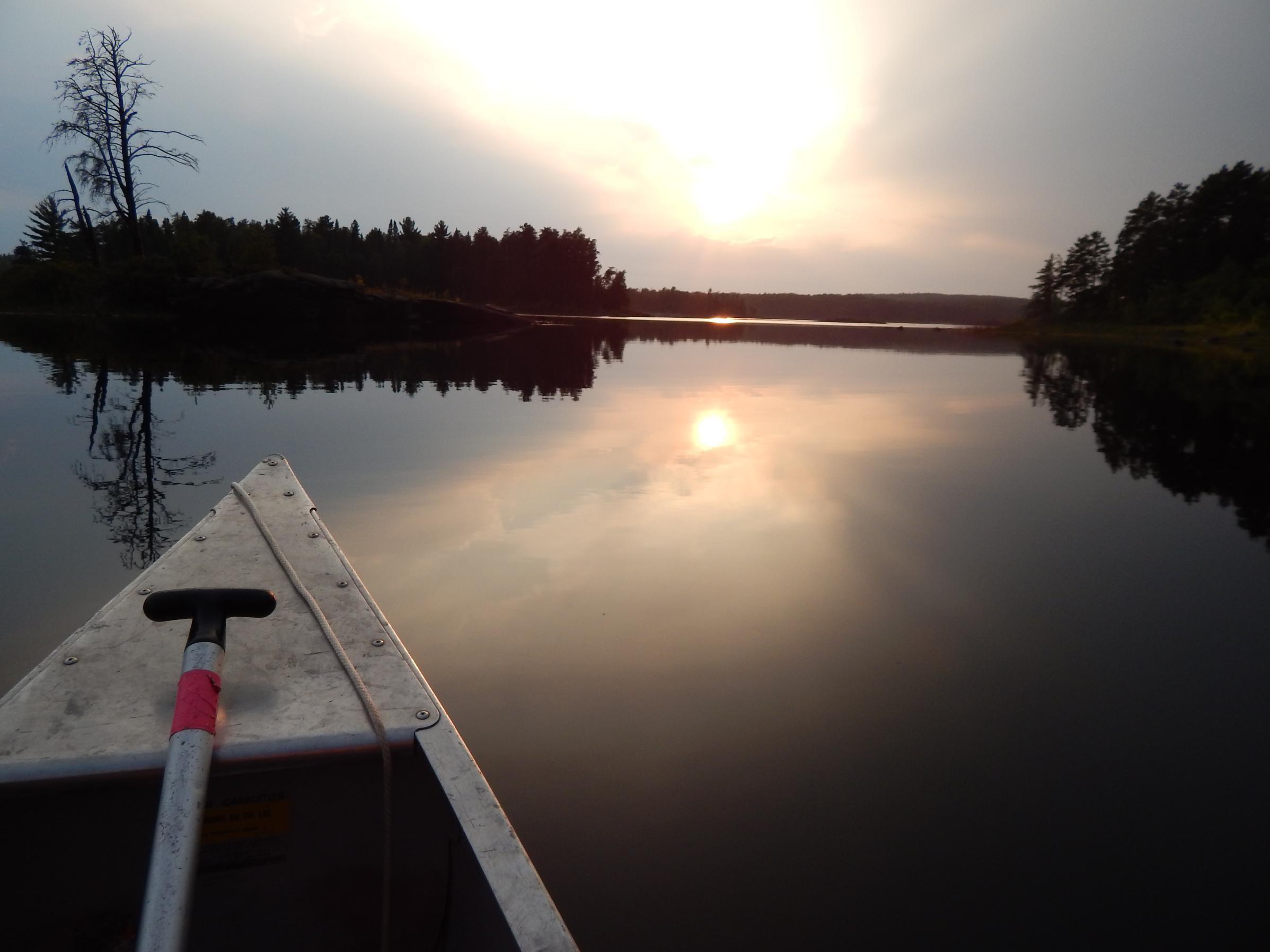