Trip Type: Paddling Canoe
Entry Date: 08/02/2016
Entry Point: Angleworm Lake (EP 20)
Exit Point: Mudro Lake (EP 23)
Number of Days: 5
Group Size: 2
Trip Introduction:
This was my first trip to the BWCA. I was going with my high school ag teacher turned best friend. He had been many times. We got our permits late and Angleworm was one of the few permits available but I was up for an adventure so we booked our permits. We left NW Indiana on 7-31-16 around 1 and drove until dark where we stayed in Wisconsin. The next morning we woke up and drove to the outfitter. We went through Cliff Wold's. All I have to say is they are great! We enjoyed the rest of the day in Ely bouncing around the little shops. I spent a little more than I should have on souvenirs but oh well. We stayed at Cliff Wold's campground for the night.
Discuss Trip: View Discussion Thread (5 messages)
Day 1 of 5
Tuesday, August 02, 2016 With this being my first trip I wanted to get an early start. Alarms were set for 4:30 and our guide Ryan was going to pick us up at 5:30. We woke up to the sound of rain and rolling thunder in the distance. This didn't dismay me in the least. I just thought, "Ah, it will pass soon." Well, after slowly enjoying my last shower for the next 5 days, I got dressed putting on my rain coat and boots. We finalized our gear and triple checked everything until Ryan came to pick us up. It rained the whole way up to the Echo Trail. We unpacked the van and got everything ready for the portage. Nothing like my first time portaging being in the rain. Ron had never done the portage to Angleworm. We both fully underestimated this portage. We knew we had to double portage but thought for sure that we would be able to go all the way through with out stopping. WRONG. We made it about 1/4 of the way before stopping. Around the half way mark (when going down the hill to Spring Creek) I saw my first grouse. We got about 10 ft. from it before it even began to get nervous. I thought for sure we had to be closer than half way. I thought for sure we would just go up and down the next ridge and be there. WRONG again. We made it to the little beaver pond. Without checking the map we assumed we had made it. Ron and I put our packs down, scurried back to grab the canoe and food pack. After a 5 min adventure around the beaver pond and referencing the map we found out we were only about 2/3 of the way there. To our dismay, we got back on land and finished the portage. About the time we finished the portage it quit raining, finally! We made it to the real Angleworm lake at last. It felt great to be at the end of the portage and to be able to paddle instead of walk.

We paddled around the lake and I cast around testing my luck with a crankbait. We knew we were going to camp on Angleworm since neither of us had the energy to do another portage. The first campsite on the east side of the lake was gorgeous but we concluded we wanted to get to the north end of the lake so we didn't have to paddle far in the morning, once we decided to leave. We knew eventually we wanted to stay around Gull Lake for 2-3 days, but weren't dead set on anything. We set up camp on the northern most campsite of Angleworm. This is a great spot. You have a nice flat rock ledge like a bench for washing up and landing the canoe. We quickly set up camp and made lunch. 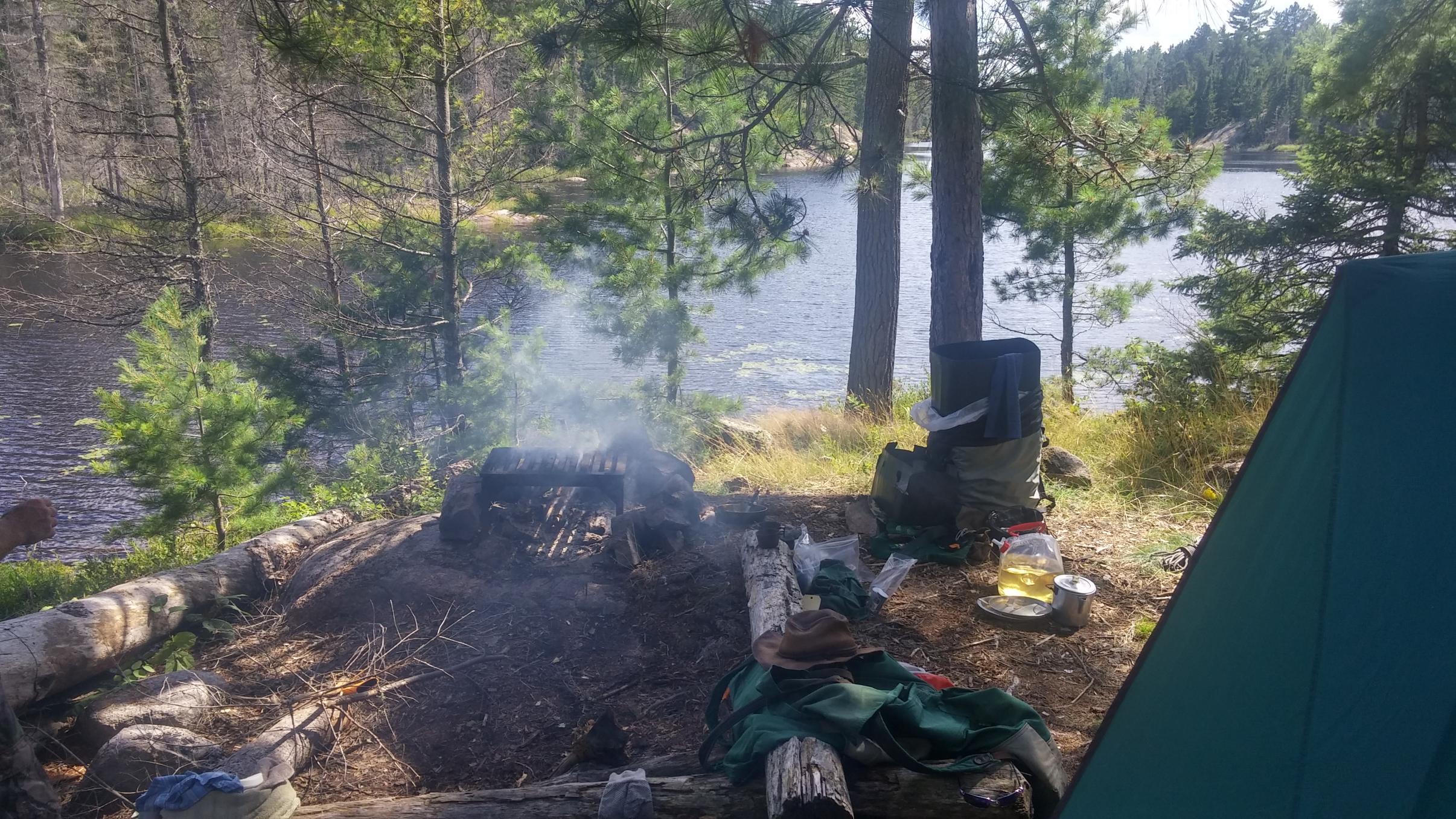 After relaxing a bit, we went back out to fish. I caught the first fish of the trip, and my first one ever in the BWCA. It was a pretty nice pike about 26". It was good enough to be dinner. We fished some until dinner time. Ron caught a Northern on a buzzbait. It missed the bait the first time and came back to hit it again right next to the boat and about hit Ron. We soon made our way back to cook up our two pike for dinner and relax until it was time to get some much needed rest. 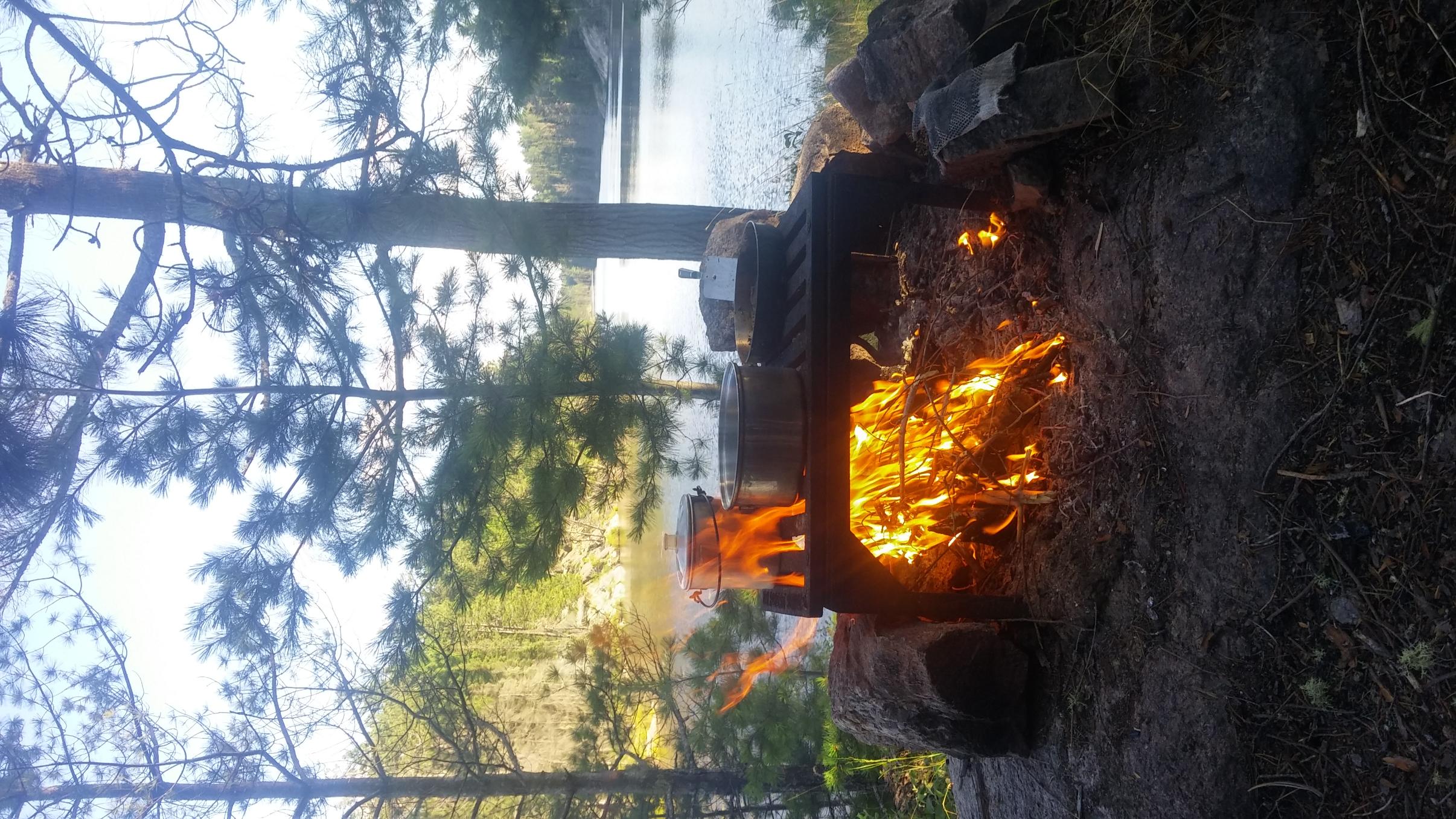 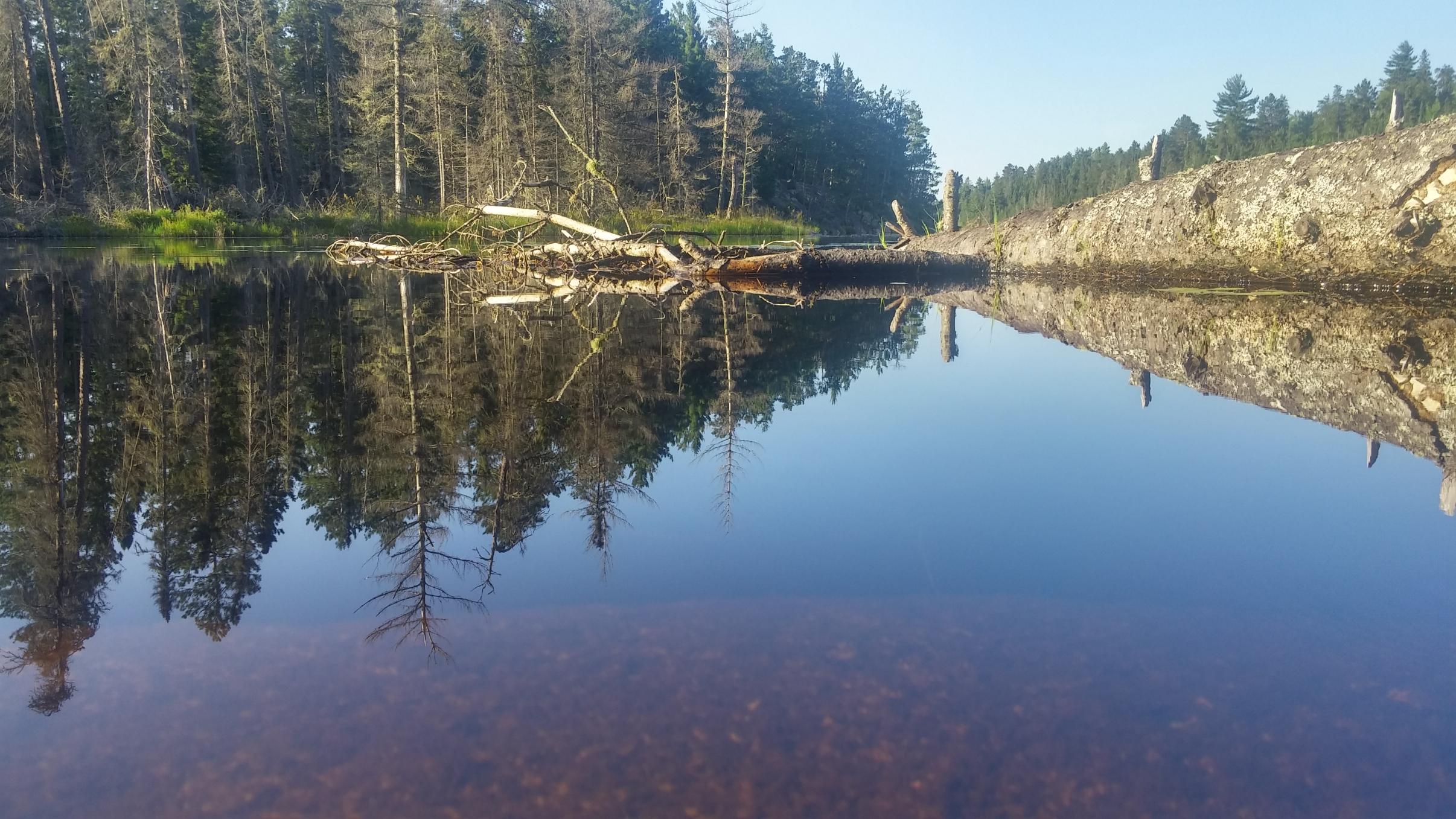