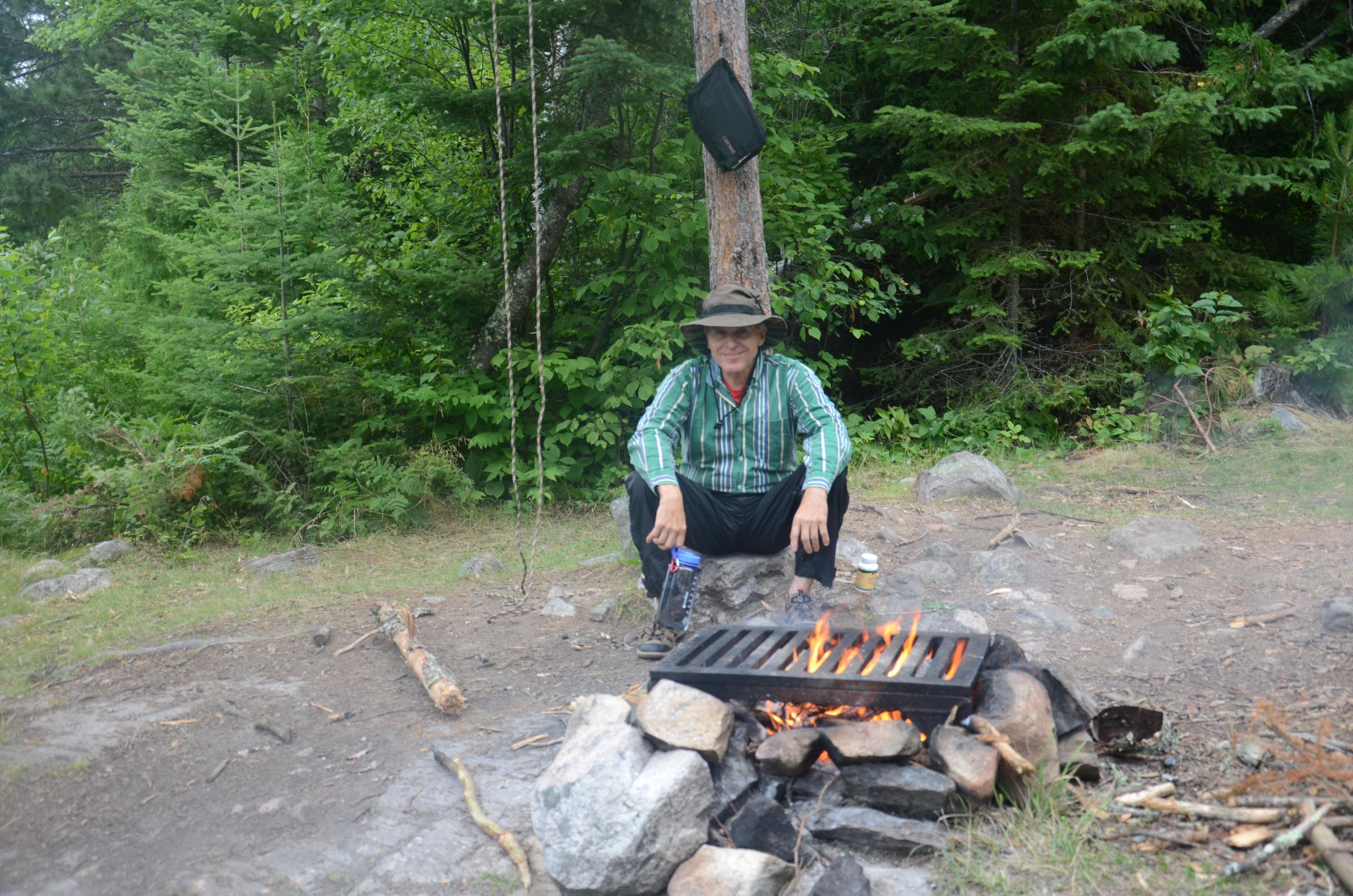 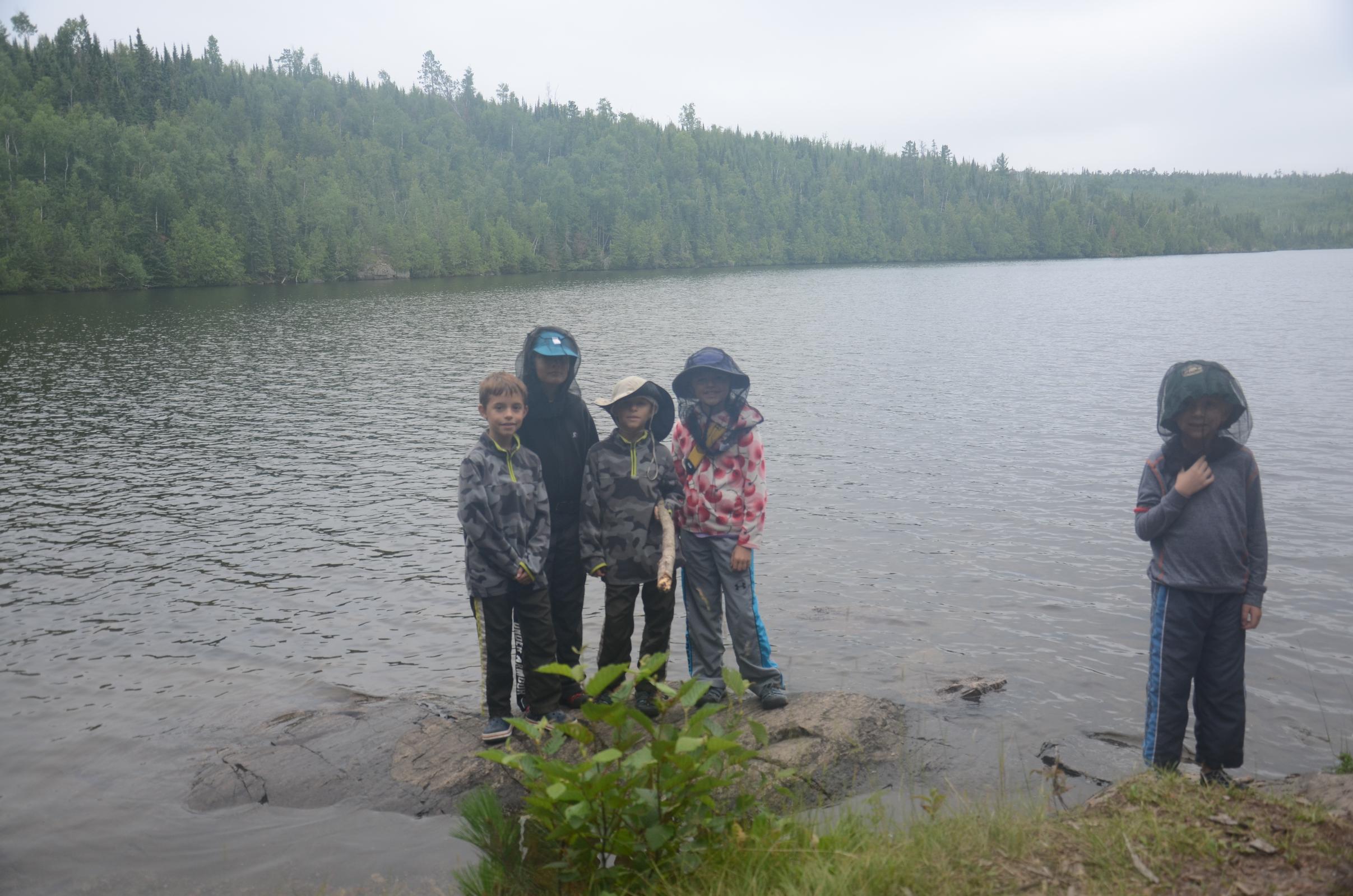 We woke up kinda tired from the previous several days of go go going and gradually picked up camp for a day of paddle. We were not sure just how far we wanted to go today but we definitely wanted to get beyond the motorized traffic on Moose. With four adults to fix breakfast and pack gear for nine people, nothing happened quickly. My family stayed in our Marmot Limestone 6P tent which was a recent purchase we greatly enjoyed on this trip. My sister-in-law and her two kids stayed in an Eureka Timberline 4P tent I had used numerous times for our family of 5 but felt was a bit too tight for this long trip. My father-in-law brought his Hennessey hammock for sleeping in. We finally got the canoes packed and started paddling around 2pm and paddled toward the Canadian Border. We decided to skip the short portage from Sucker into Birch and instead paddle around the point of land. We were loaded heavy with 200 pounds of food and we were certain portages of any length would slow us down quite a bit. We ate lunch at I believe campsite #1288 on Birch Lake which we found to be beautiful with a nice canoe landing. The kids quickly started exploring and then swam (with lifejackets on) to a nearby island. We decided to paddle further and perhaps camp at one of the sites at the eastern end of Birch Lake before the five portages into Knife Lake. We were a happy crew and we soon passed a full campsite with a couple of ladies who asked where we were headed. My reply was "East" to which she laughed and informed us that there was one open site on Birch and she would advise against trying to make it further. We pressed on and every campsite beyond those ladies was full. So we quickly decided that backtracking was not part of our genetic disposition and onward we go. We saw one canoe with two men come to the portage landing from Carp Lake into Birch Lake and they slipped their canoe in the water, slid a couple packs in, and started paddling all within a couple minutes. I was envious for I knew our progress would be a far different story. 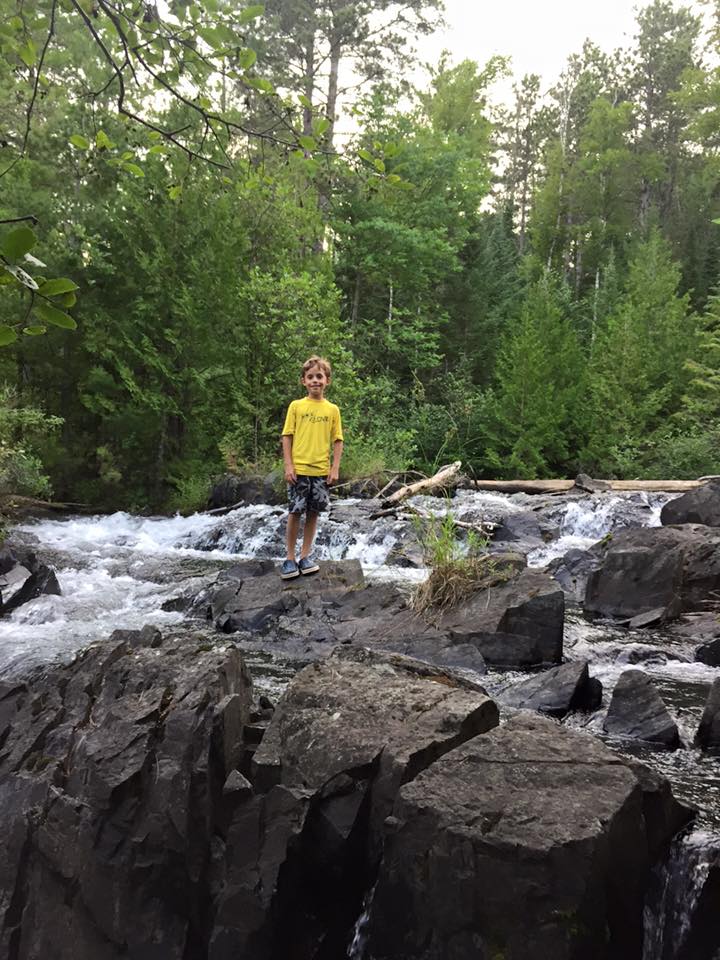 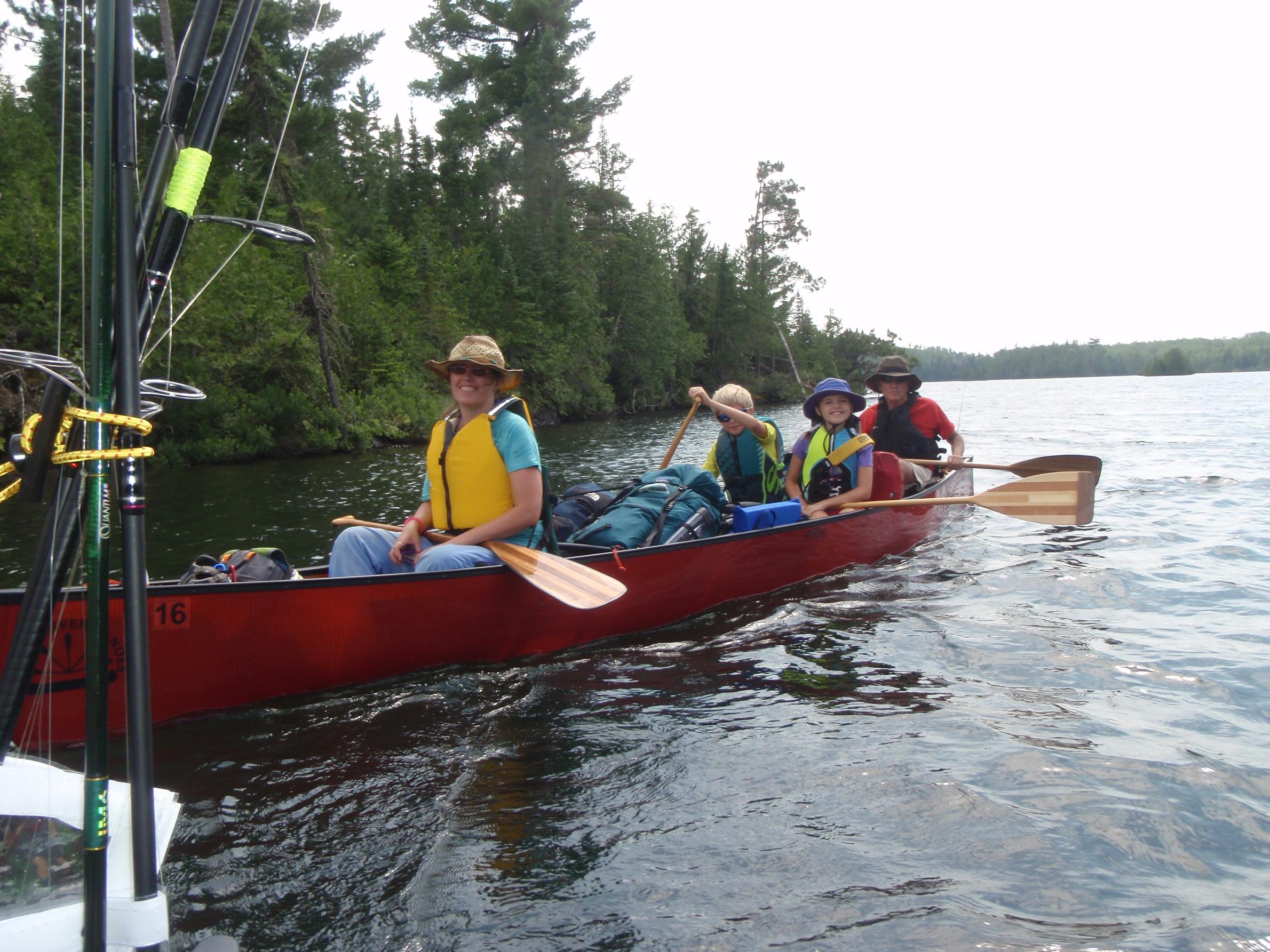 Portaging was our biggest challenge and took us a long time. In the canoe I was paddling we had three CCS Rucksacks for kids packs, a 110 pound double barrel food pack that had only my name on it, the Battle Lake Grand Portage Pack, a small daypack with snacks and misc small items, my fishing tackle box, a waterproof Pelican case with first aid items, four fishing rods, our Marmot 6P tent, and a larger black Pelican case with my DSLR camera, solar charger, flashlights, and other must-stay-dry items. The under-seat bags contained a bailing sponge, a homemade bailer, a NRS Rescue throw rope, and an anchor bag with 200 feet of parachute 550 cord. Other items also slipped into the under-seat bags such as water bottles, sunscreen, bug spray, and in my bag, the Secchi disk kit from the State of MN. Each adult had a set of maps for the trip with the stern paddles using McKenzie maps, and my wife using Voyageur maps, and my sister-in-law using Fisher maps each within Seal Line map cases of either large or medium size. The tent loose in our canoe I had planned on strapping to the top of the 60L Barrel but no one but me could carry that when the barrel was full so it was carried loose mostly. The canoe my father-in-law was paddling had his pack, my sister-in-law's pack, packs for their two kids, a 60L barrel pack, two loose sleeping bags, a loose 4P tent, tackle box, fishing poles, and a small daypack with snacks. The loose 4P tent I had planned on putting in the double barrel food pack but they wanted it loose for a kids backrest. 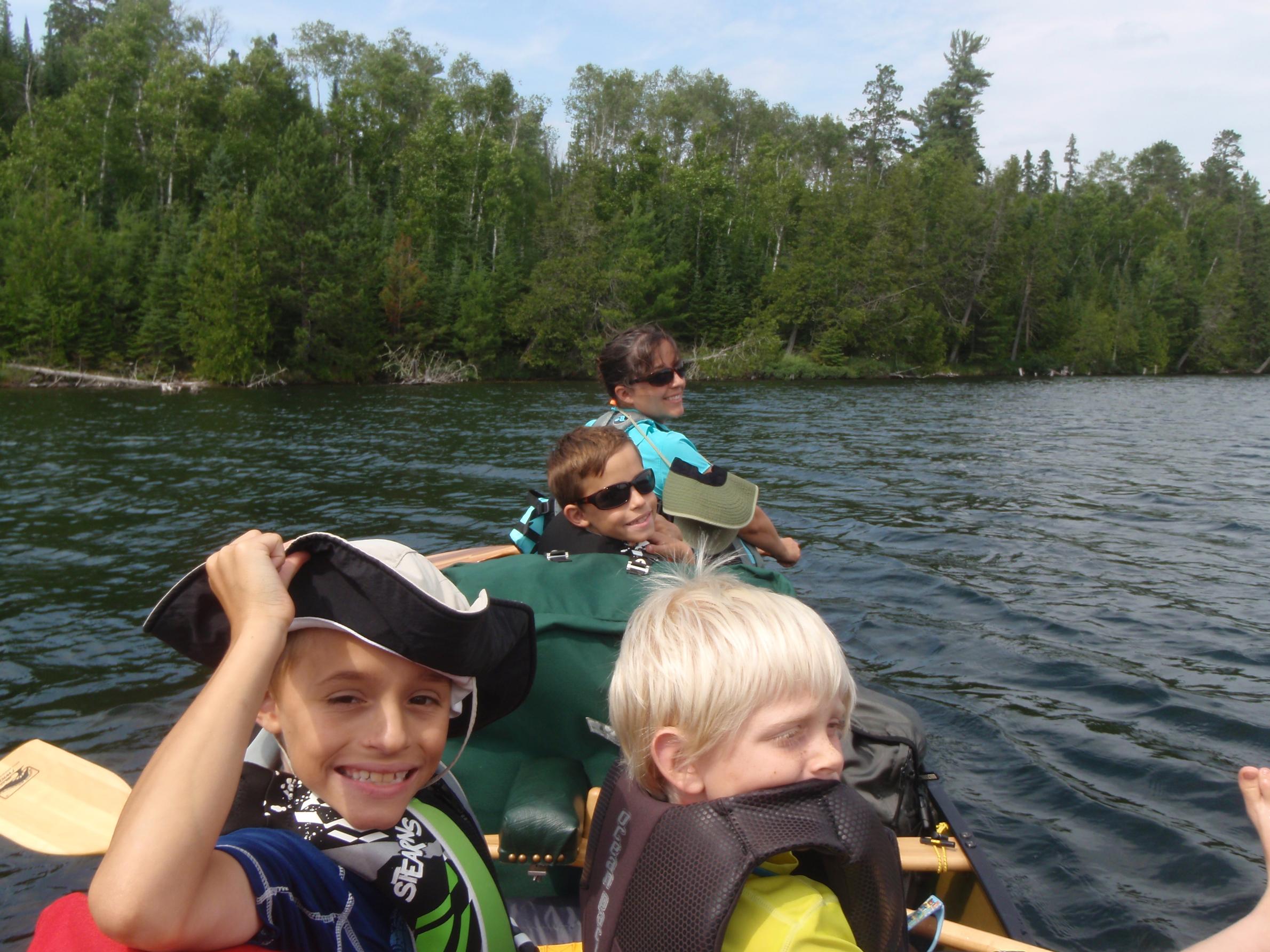 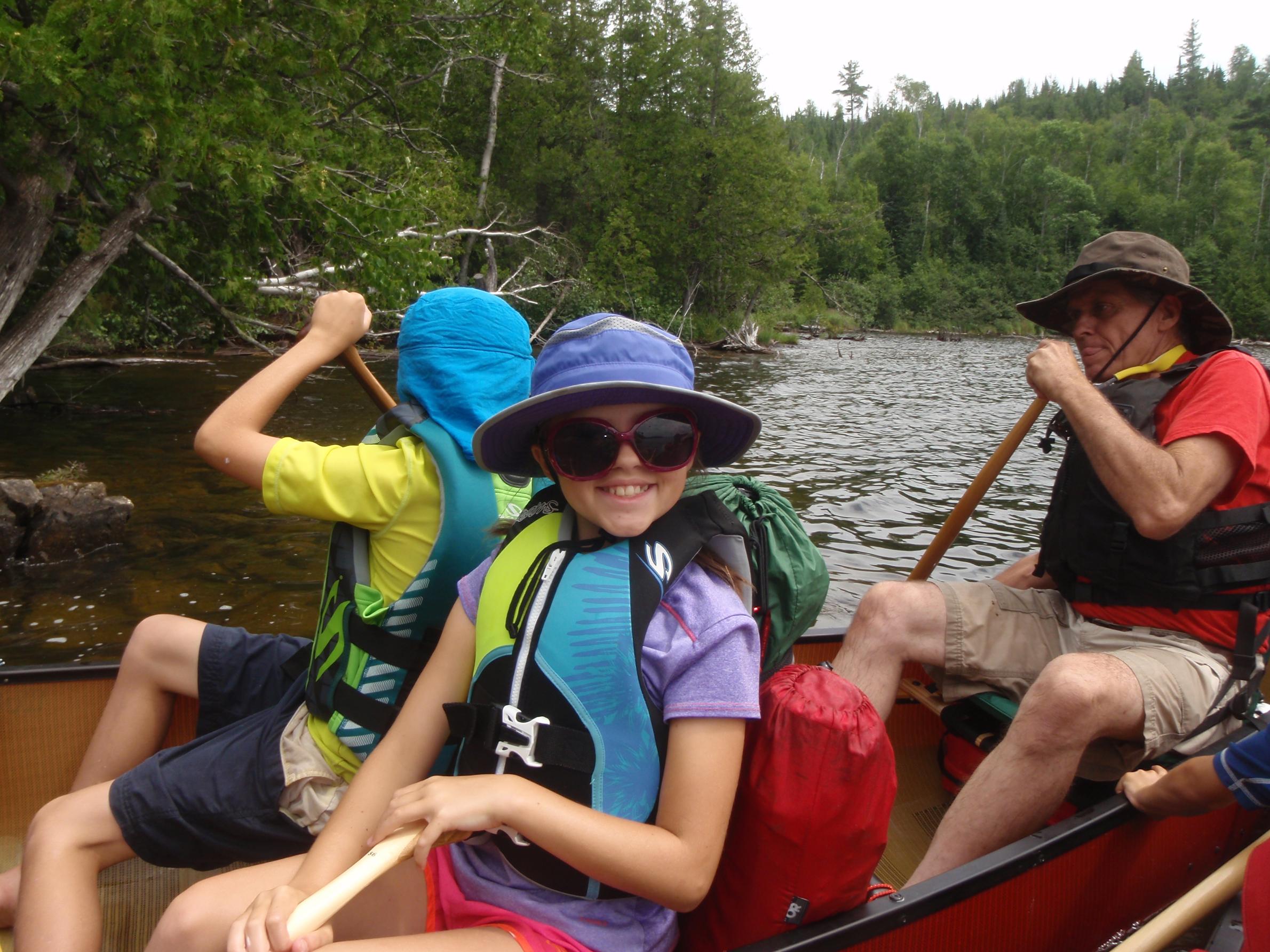 The shorter portages we simply handed the kids paddles and their packs and told them to start and they would make several trips before we had the canoes completely unloaded. Once unloaded I would either carry a canoe plus pack over or just the canoe, or help load the canoe on one of the ladies shoulders. We mainly double portaged but sometimes one adult would single portage and perhaps another adult would triple portage. It varied based upon portage landings, wind and water conditions, length of portage, and how my father-in-law's back was feeling. We would often ask the kids to hold the canoe in the water at the portage landing while we loaded or unloaded it. That did not work in difficult conditions though. 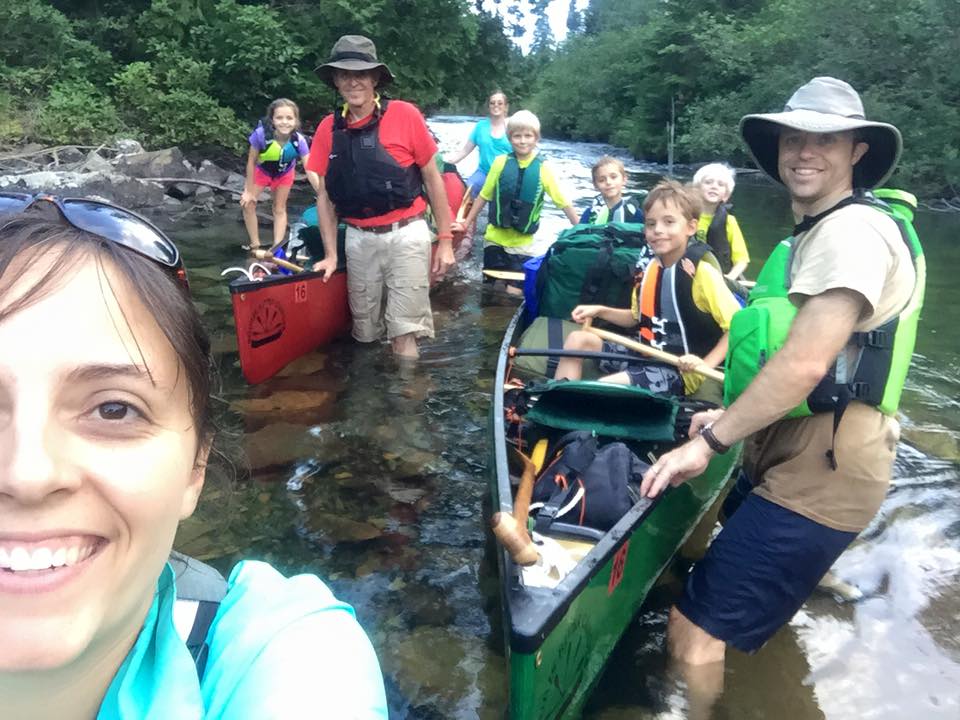 We progressed through the portages and came to one portage around some rapids and decided to try and walk the canoes upstream against the rapids instead of taking the portage. The youngest boys and grandpa stayed in the canoe and the rest walked up the center of the rapids with hands holding the boy of each canoe. The water at times was almost waist deep on me and very swift but the length of the rapids was very short and a nice body of open water at the base of the rapids reassured me in case someone slipped and a canoe broke free. The kids especially enjoyed this exciting experience. I decided it would be a rapid not to attempt to paddle down, at least not with a fully loaded canoe. The 75 rod portage at the eastern side of the Big Knife Portage gave us all an appreciation for carrying very heavy packs/canoes 1/4 a mile. We set forth from that series of portages and darkness was closing in. We held to the southern shoreline and thought to check out campsites inside the first bay on Knife Lake before progressing further. Fortunately the first campsite we found on Knife was open and large enough to accommodate our large group. We unloaded canoes with headlamps and flashlights on, set up tents and used stoves for cooking some supper. Supper that night was tortillas with reconstituted beans with seasonings, some cheese, and they tasted wonderful. The wind was blowing some and finding good tent stake locations was difficult in the very rocky terrain, an issue we discovered many places. Sleep came easily that night.