Swampy but Passable
by wyopaddler

Trip Type: Paddling Canoe
Entry Date: 09/12/2014
Entry & Exit Point: Quetico
Number of Days: 14
Group Size: 2
Trip Introduction:
Introduction September 10-11, Wyoming to Canada- We left Lander, Wyoming at 130pm on Friday planning to camp in eastern Montana off US94, but after driving through pouring rain that was trying to turn into snow, we opted to get a hotel. That was NOT to be. The oil companies had bought out all the hotel rooms from Billings to Bismarck, so we drove on and on and on grabbing a nap at the rest area with the truckers and breakfasting briefly in Jamestown, SD before driving into Minnesota. We arrived in International Falls around 4pm. Crossing the border was very uneventful given that we didn’t have alcohol, tobacco, guns, or mace. We tried to do some shopping in Fort Francis for last minute essentials (cheese, sausage, and torts) but found out we should have shopped in Bemidji. Options were very limited or maybe we are picky. . . After a scrumptious lunch of pizza and salad at Boston Pizza we headed on to Atikokan and snagged a room at the White Otter Inn and spent a couple of hours organizing gear before hitting the sack.
Discuss Trip: View Discussion Thread (7 messages)
Part 1 of 7
Day 1 September 12, Beaverhouse to Quetico

In the morning we had the Big Castle Breakfast of eggs, sausage, potatoes, and pancakes to prepare us for the day. The weather was clear and beautiful but it was kinda cool (50s) as we ran errands around town, paid our fees at the park headquarters, finished packing the food and gear and then headed to the Beaverhouse entry at about 1100am. The road to Beaverhouse was in good condition. There were about six vehicles in the parking lot and we met a party of four coming out of the portage, two older gents with a couple of younger guys in tow. The older guys shared they had been fishing together since they were eighteen years old. How cool is that? The younger guys grabbed our packs on the return portage and left me empty handed. I felt like the queen for the day, but I’m too old to feel guilty.

Beaverhouse Lake was nearly still when we launched a day ahead of schedule at the crack of 200, that’s pm. We munched on Clif Bars (Coconut Chocolate Chip) as we paddled to the portage to Quetico Lake. A smile broke onto my face as I thought. “We are here!” A loon welcomed us with its throaty call just off the bow. 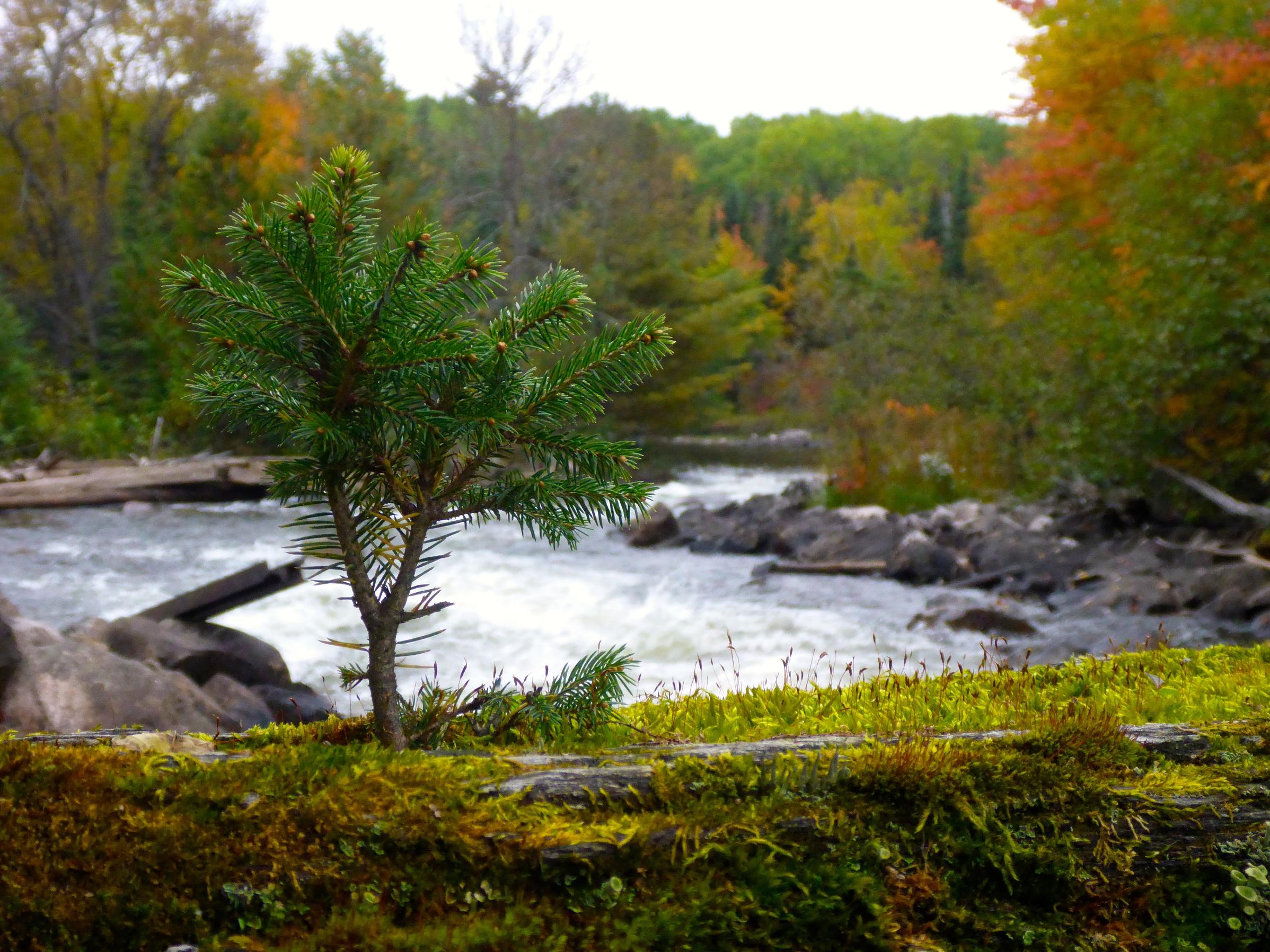 The portage into Quetico Lake was short and uneventful though the take out was full of calf deep gray clay-like mud. Tony negotiated it carefully with the boat and soon we had the packs on the other side as well. Two weeks in the Canadian lake country loomed ahead of us as we paddled up the lake in a mix of clouds and sun. 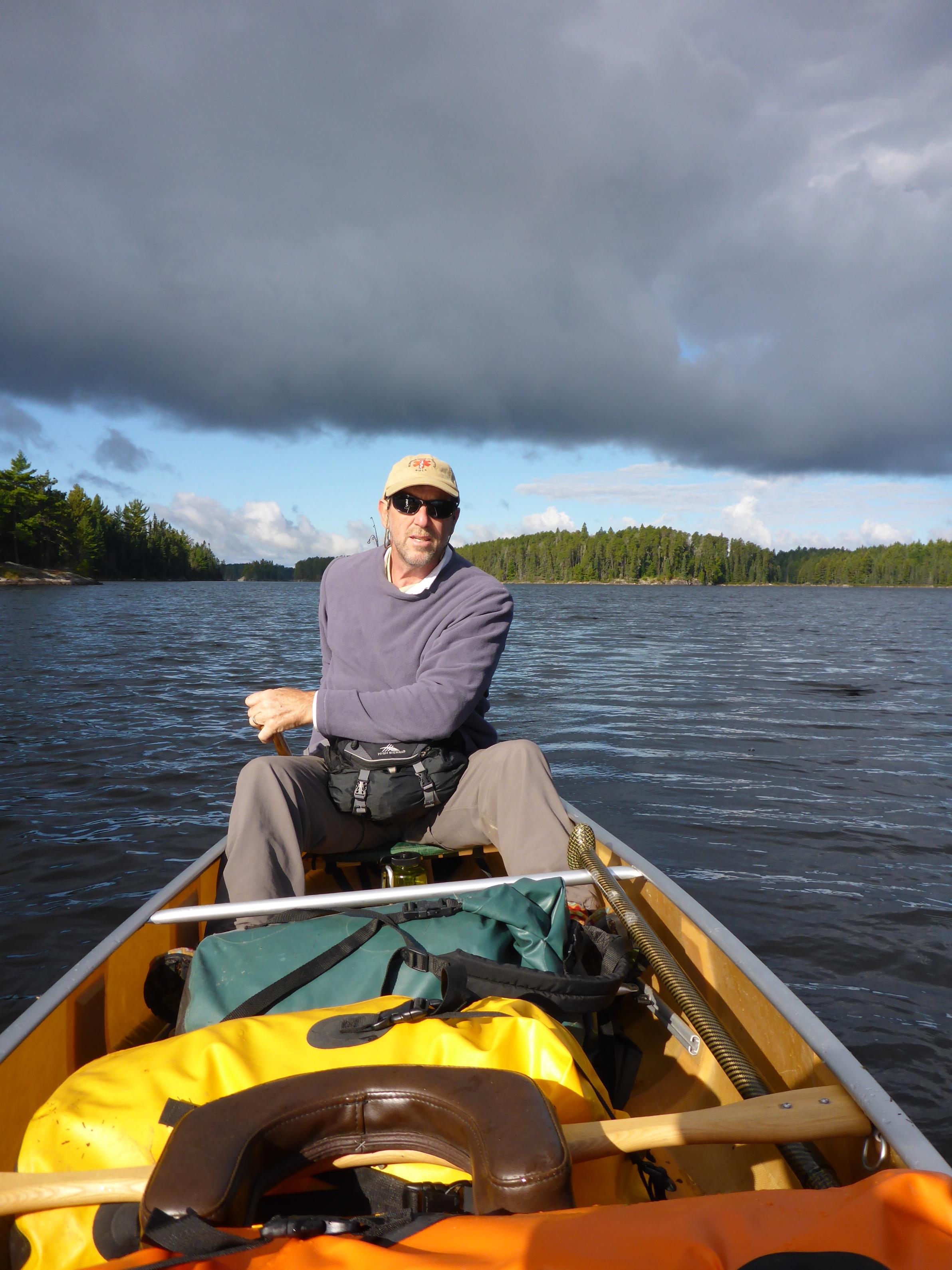 We soon spooked a Great Blue Heron and not long after an immature eagle crossed in front of us and landed in a nearby tree. We paddled a couple more miles into a light headwind shaking off the 1200 mile drive and the last few months of civilization. At about 400pm we chose a camp on a small point and set up our first tent in the pines. It was a cool afternoon but as Tony got a small fire going, the wind died, and it was noticeably warmer. Hot chocolate and dry socks took the edge off. We chatted companionably as we sorted gear and started our first dinner. It always takes a couple of days to get organized and settled into a routine. Thai Peanut Noodles with cashews was on the menu with a Cross family favorite, Coffee Crisps for dessert. We valiantly tried to hang around the fire but days of travel and scurrying about to get ready for the trip caught up with us and we hit the tent at the late hour of 900pm. Tomorrow we’ll try to make some miles. Hoping for a tailwind.

We arose at 700am to 40 degree temperatures and a slight breeze blowing west to east. It’s a good day for sailing! We lounged around a little over coffee and pan-fried bagels while making the decision to head for Jesse Lake through Oriana. Launched around 1000am and after paddling into the channel the captain gave the order to “release the Kraken.” 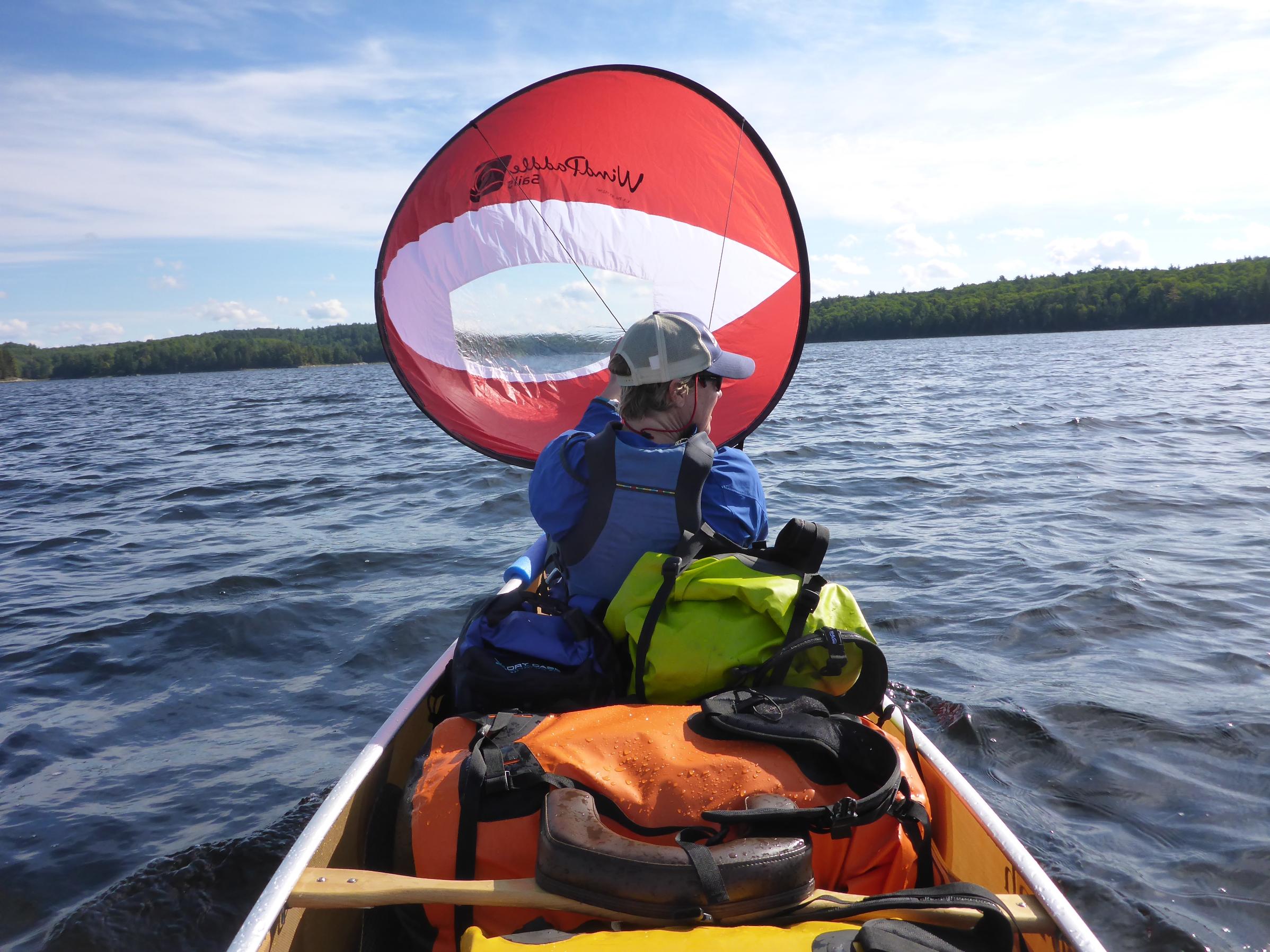 Tony had received a Windpaddle sail for his recent birthday (Ok, it was from me.) and today was its maiden voyage. The breeze filled the round sail attached to the bow. I controlled the sail while Tony kept us headed forward. I took only a little ribbing as I lounged in the front controlling the lines. (Hey, it was a lot of responsibility!) We had some trouble with the clips releasing from the bow but Tony rigged a solution (cord loops) at our lunch stop just past the entrance to Conk Lake. It was hard not to laugh out loud as we sailed along creating our own small wake. We hit the end of Quetico shortly thereafter and decided to keep going across the portages to Oriana. As we approached the end of the lake we struggled to find the portage which on the map appeared to be on the south side of the lake. After paddling back and forth a couple of times and peering into beaver slides I hopped ashore into the mud and grass to try and transect the trail. As I explored further it became clear that beaver had built a dam across the shallow end of the lake preventing access to the portage. Tony did a slight bit of engineering of his own and we navigated our way to the takeout along the south side of the dam. The portage itself was uneventful but when we reached the other end we were presented with an even larger dam that required us to unload our gear into the hillocks of grass and water so we could lift the boat over. 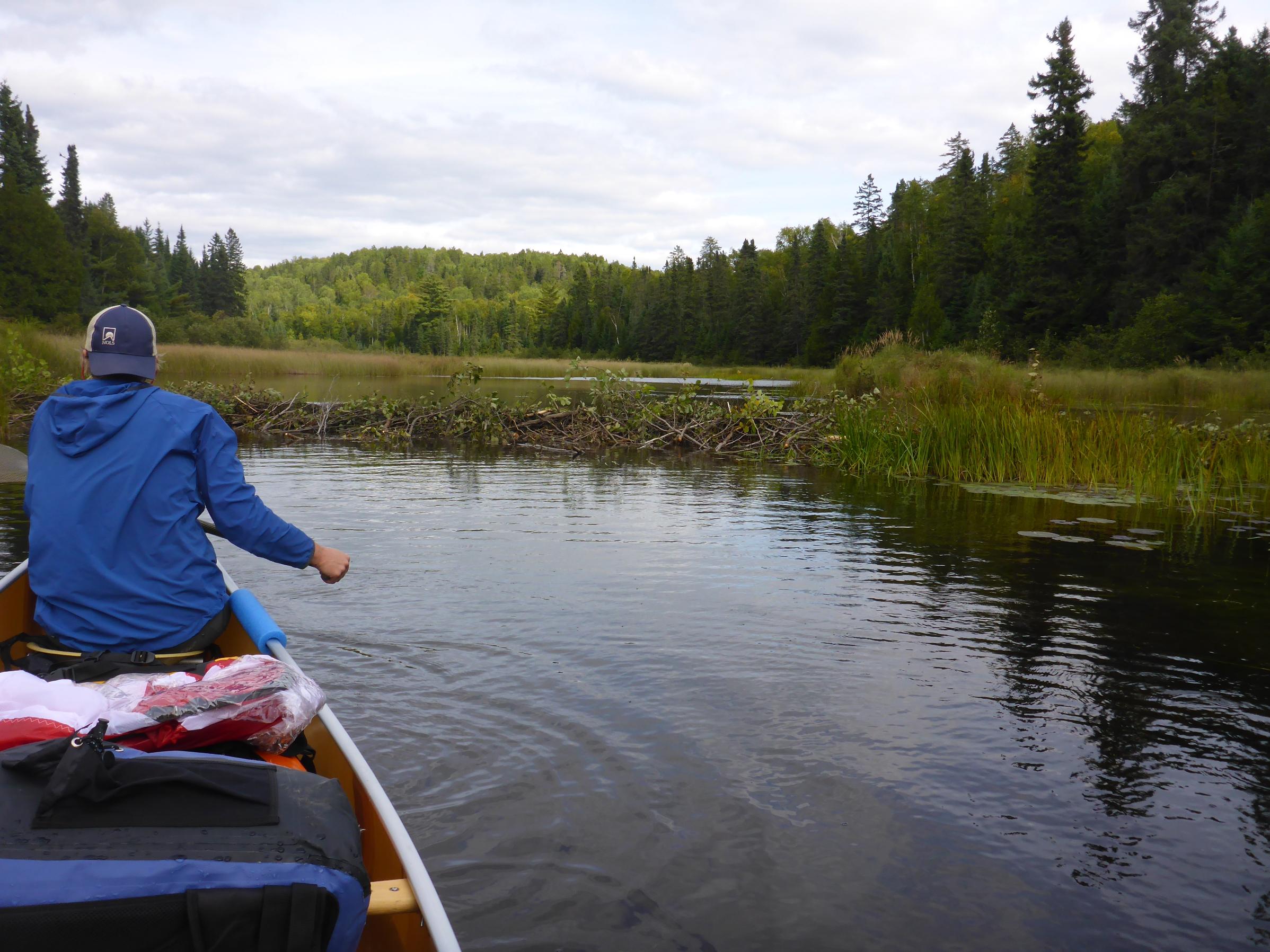 It’s a wonder neither of us went swimming. Now we were falling behind schedule. We crossed a second short portage and paddled out into Oriana. We proceeded down Oriana and passed up what appeared to be a nice campsite on a west facing point deciding to make the push onto Jesse and take a lay-over day tomorrow to fish. (Today was our second day in the Quetico and we hadn’t even wet a line!) We dug deep across Oriana and up a shallow muddy approach to the Cedar Potage which was long and slightly uphill but not too challenging by Quetico standards. It was nearing the end of a long day, after 500pm, and we still had another short portage to get into Jesse. We had a quick energy bar snack as we wove our way through the mounds of grass hoping not to find another beaver barricade. Luck was with us on that count but we did encounter another low water, sucking mudfest of a take-out as we moved our gear across the last short portage into Jesse. As we paddled up the narrows in the evening light it became clear why people hold Jesse Lake in such high regard. 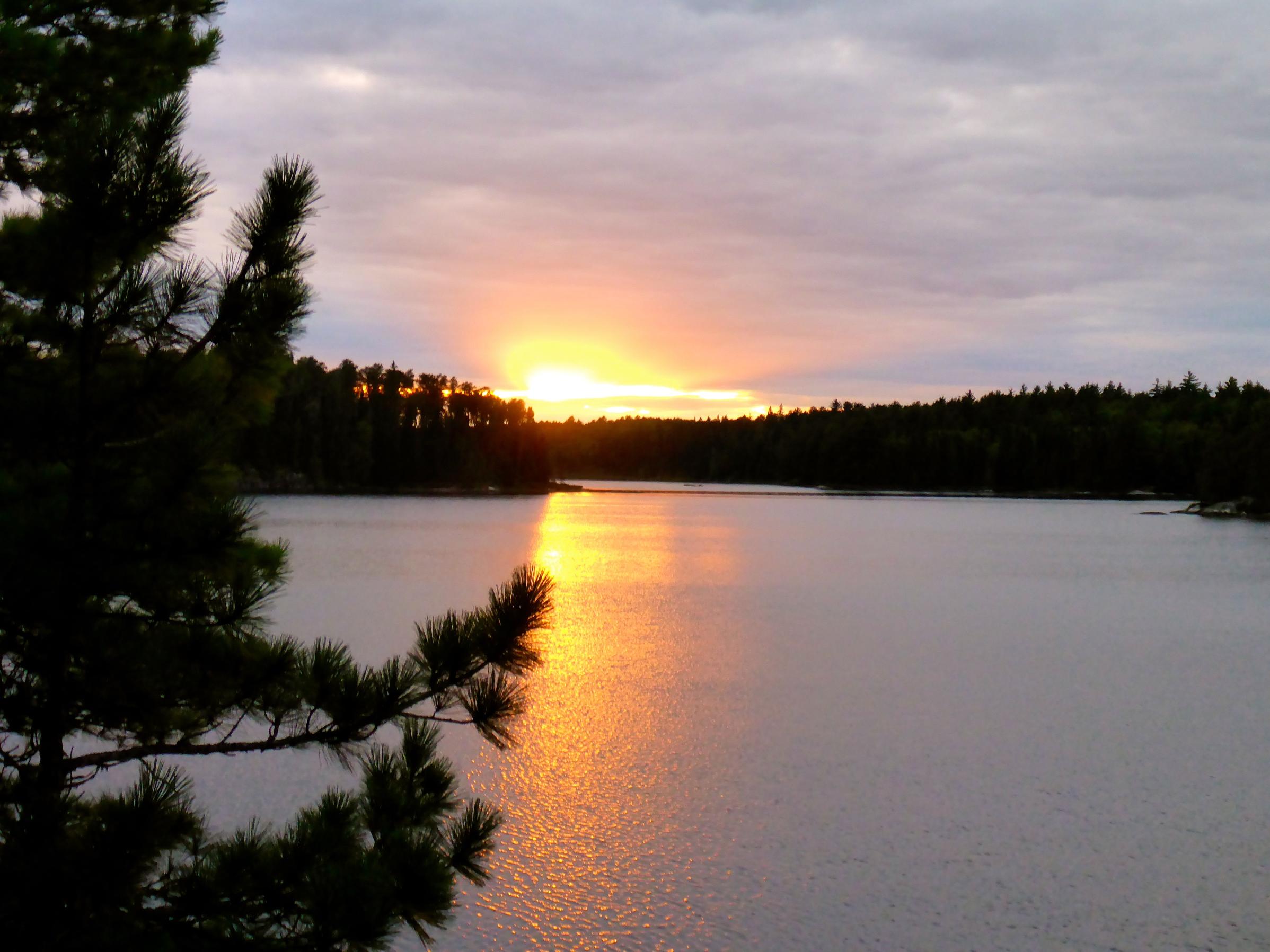 It is a beautiful spot characterized by many islands of a variety of sizes dotting its landscape, as well as rocky outcroppings poking above the surface holding the promise of fish below. Three otters, their heads peeking above the surface curiously lead us down the narrows and a bear that turned out to be a stump lured us to the east. I kept trying to check out camps but Tony, claiming map disorientation compelled us down lake to a 4-star island camp. I believe I was duped and it was his plan all along. We hit camp shortly after 700pm and quickly set up our tent, tarp, and battened down the hatches as the sun was setting. Dinner was served in the dark at about 815pm. We made a quick pasta dinner that a little gray mouse really wanted to share. (I think he lives under the fireplace.) We secured our food and loons sang us to sleep. It was a good day in the Quetico.