Trip Type: Paddling Canoe
Entry Date: 08/24/2015
Entry Point: Brule Lake (EP 41)
Exit Point: Brule Lake (EP 41)
Number of Days: 5
Group Size: 2
Trip Introduction:
This would be Dan and myself 2nd trip to the BWCA. The first one was in 2013 and Dan had been dreaming of canoeing the BWCA for 40 years, He approached me about taking another trip and I was excited to go again. Dan and I left from Lincoln Nebraska bound for the BWCA by way of Fargo North Dakota first. We stopped at family in Fargo to help make 4 crocks of Sour kraut with my husband’s mom. Then off on Sunday to drive to Sawbill Lake to camp and get our canoe. We stopped along the drive at Lake Superior and found the blueberries we love to take with us in the BWCA. Sunday night we stayed at Sawbill Campground, it was rainy and cool. We decided after we got our canoe to eat some supper while the rain let up. We thought it would be a good idea to air up our mattress and sleep in the back of Tahoe instead of setting up the tent in the rain. We really wanted to get an early start in the am. We were driving from Sawbill Lake over to Brule Lake put in at area 41, it is about 1 hour drive. We both decided that was a bad idea to try and sleep in the Tahoe with all our gear etc., neither one of us slept very good.
Discuss Trip: View Discussion Thread (9 messages)
Day 1 of 5
Monday, August 24, 2015 When we got up Monday morning it was raining and the wind was blowing, we decided to go back to sleep until 7:30. We arrived at Brule lake by 8:30 am. We were unloaded and putting in the lake by 9:00 a.m. very windy 25 mile per hour winds.Two other groups were taking out while we were putting in. The one group were Thanking God as they put their feet on the solid ground because they made it across the Lake. It was very windy and drizzling rain. I was beginning to think twice about this trip. I was already very nervous about going across such a big lake and from what we had read it could get really bad if it was windy. We had studied the map prior to going and checked out campsites on the BWCA website, so we had a few marked that we preferred. We decided to try for the closer campsite to the put in, however we were turned around a little on the map. Most of the campsites were occupied. We paddled around for 1 1/2 hours. We met 2 other canoes on the lake looking for spots. The people in the other canoes looked like they were in their 70’s. Even in the crazy wind and rain we had a pair of loons greeting us. We finally found an empty campsite, I was just sitting in the canoe praying no one was already there as my husband went up to check the camp out. According to the BWCA map it is campsite #953. I was so happy that we made it as far as we did, we were paddling for all we could to make it across the opening of the lake, with the wind blowing every time we dug in with our paddles we weren't getting anywhere and water coming over the top of our canoe. We got our tent set up and the food bag hung up by 11:00 a.m. We both needed to get out of the rain and wind and retired to the tent to get a well-deserved nap. The first night we had our traditional Steak and Baked Potatoes supper, our steaks were still frozen when we got them out. We had gathered sticks and pine cones before we laid down for our nap and placed the wood we found under a tarp. We wondered if we would get a fire going to cook our steaks on the grate since it was raining or misting all day and evening. Dan had prepared Vaseline petroleum jelly on cotton we carried in a pill bottle and with some dry sticks and pine cones it worked great. The steak & potatoes were fabulous and hit the spot after a stressful day. Even though it was stressful there is something about the air here and the atmosphere that makes you want to come back, there is no where else I have ever been that made me feel this way. Even in the unknown area and not sure about getting a campsite, I still want to be here. I joke sort of about the Lake being Brutal, it is a big lake and when your canoe is loaded and it is raining and the wind is blowing your not crazy about the size of this lake. But it is a beauty. 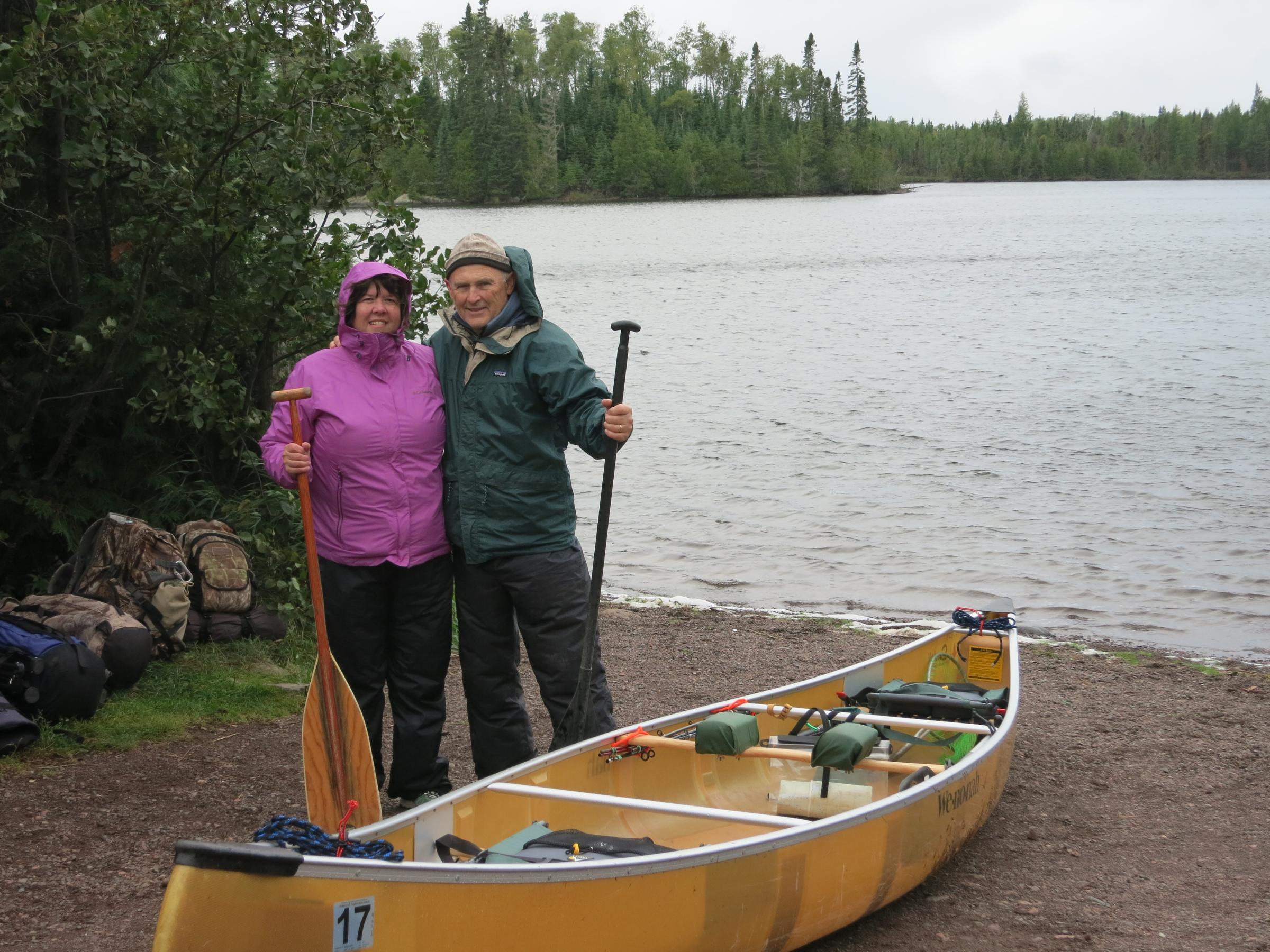 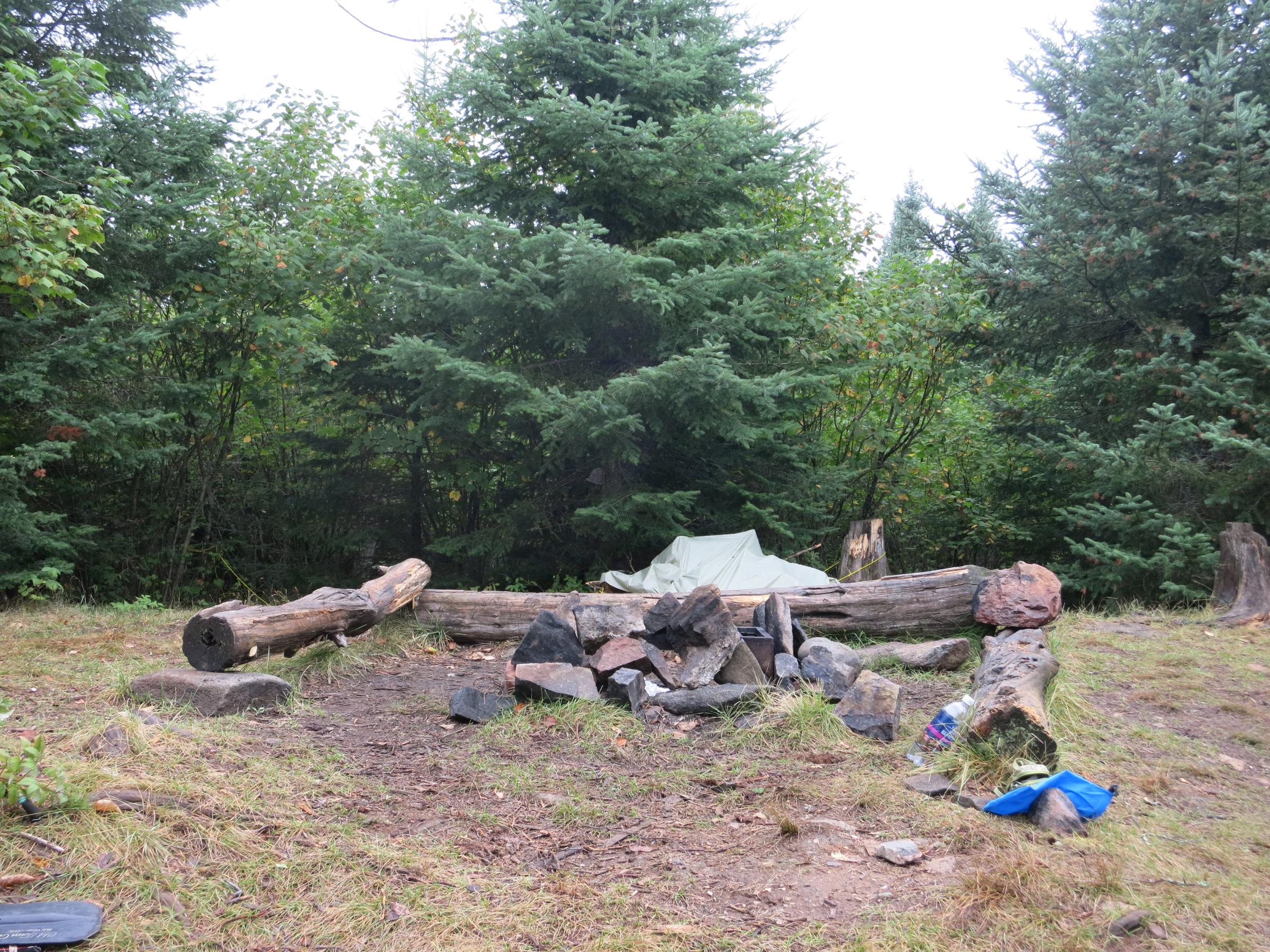 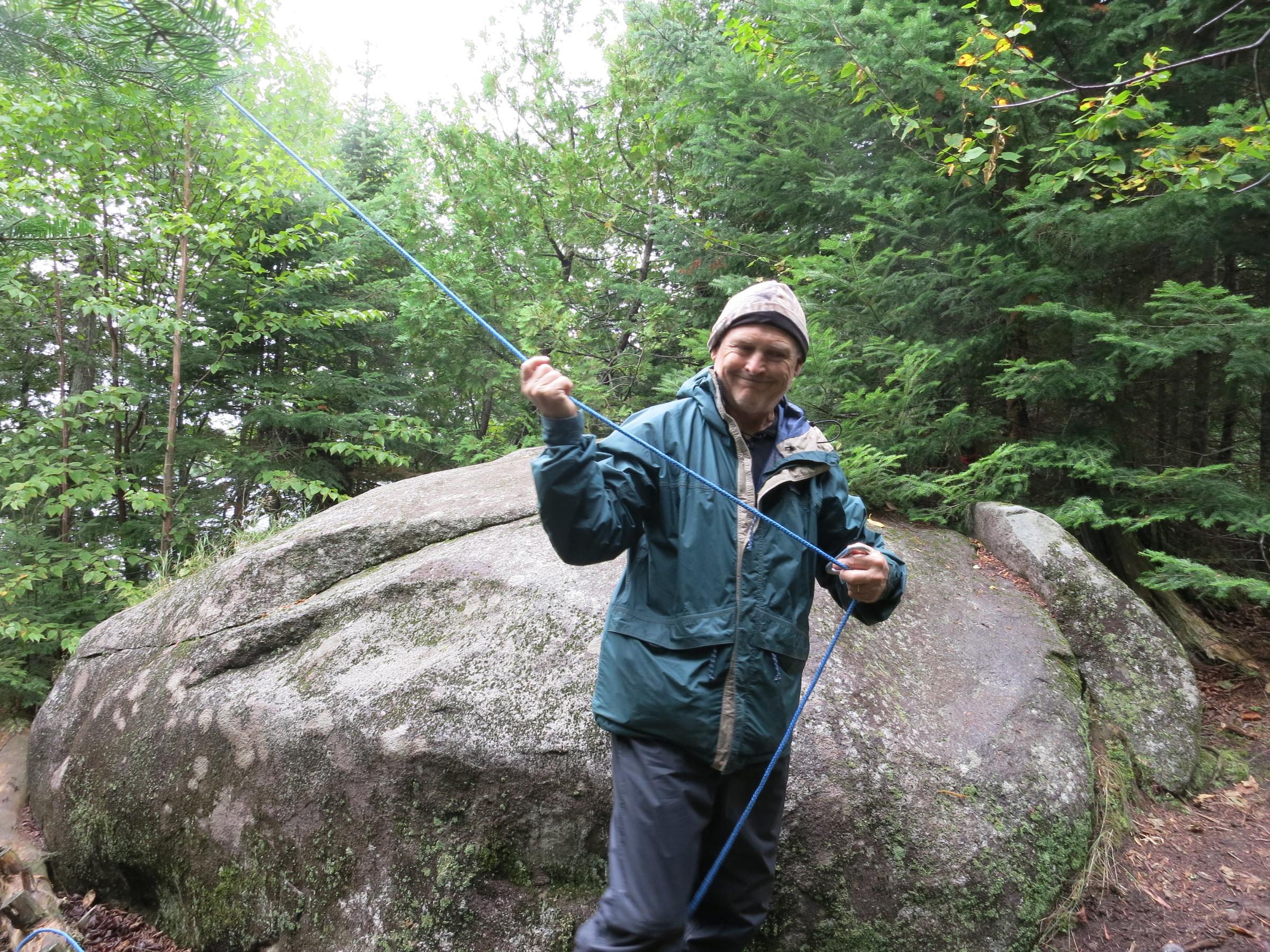 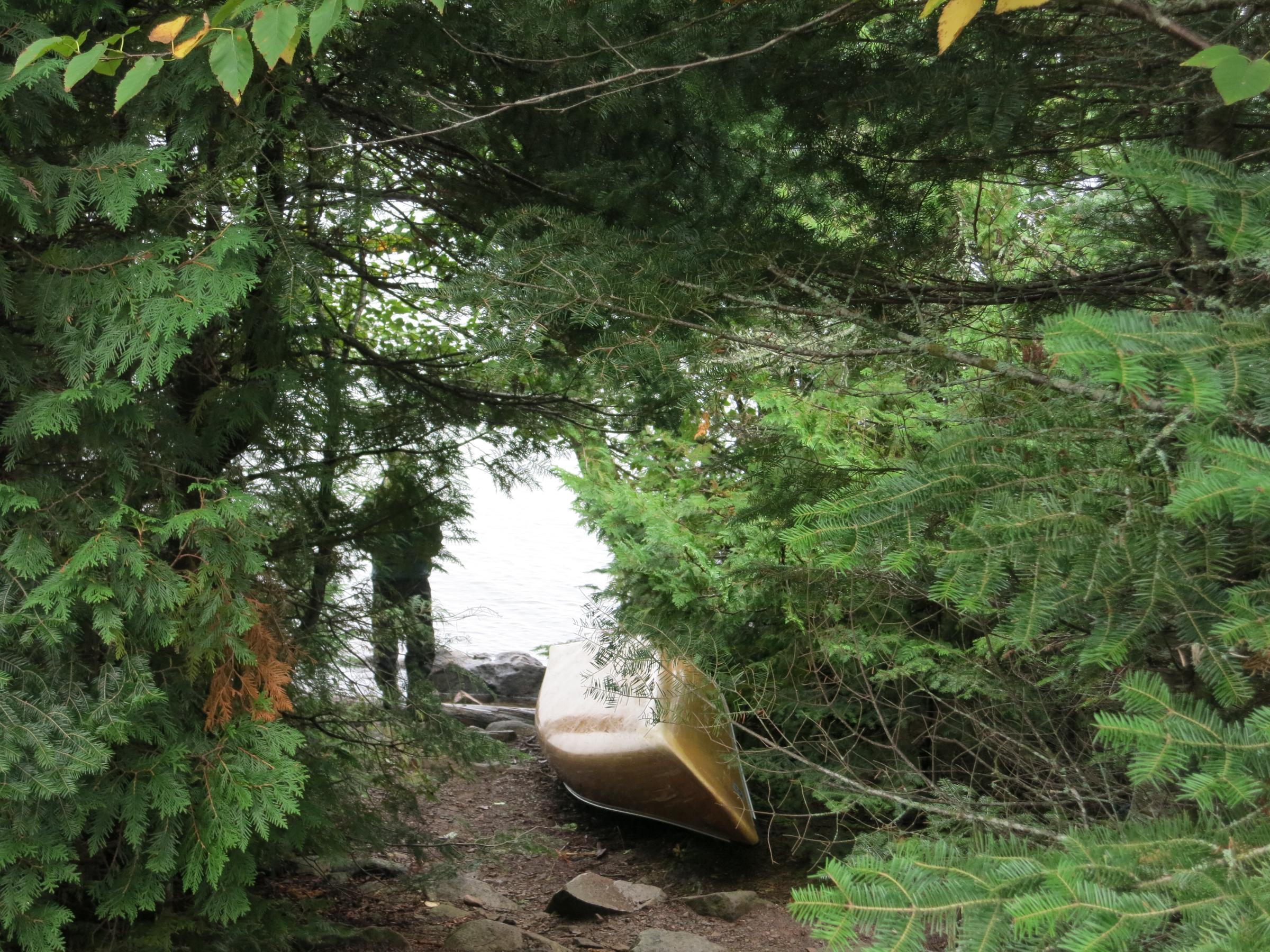 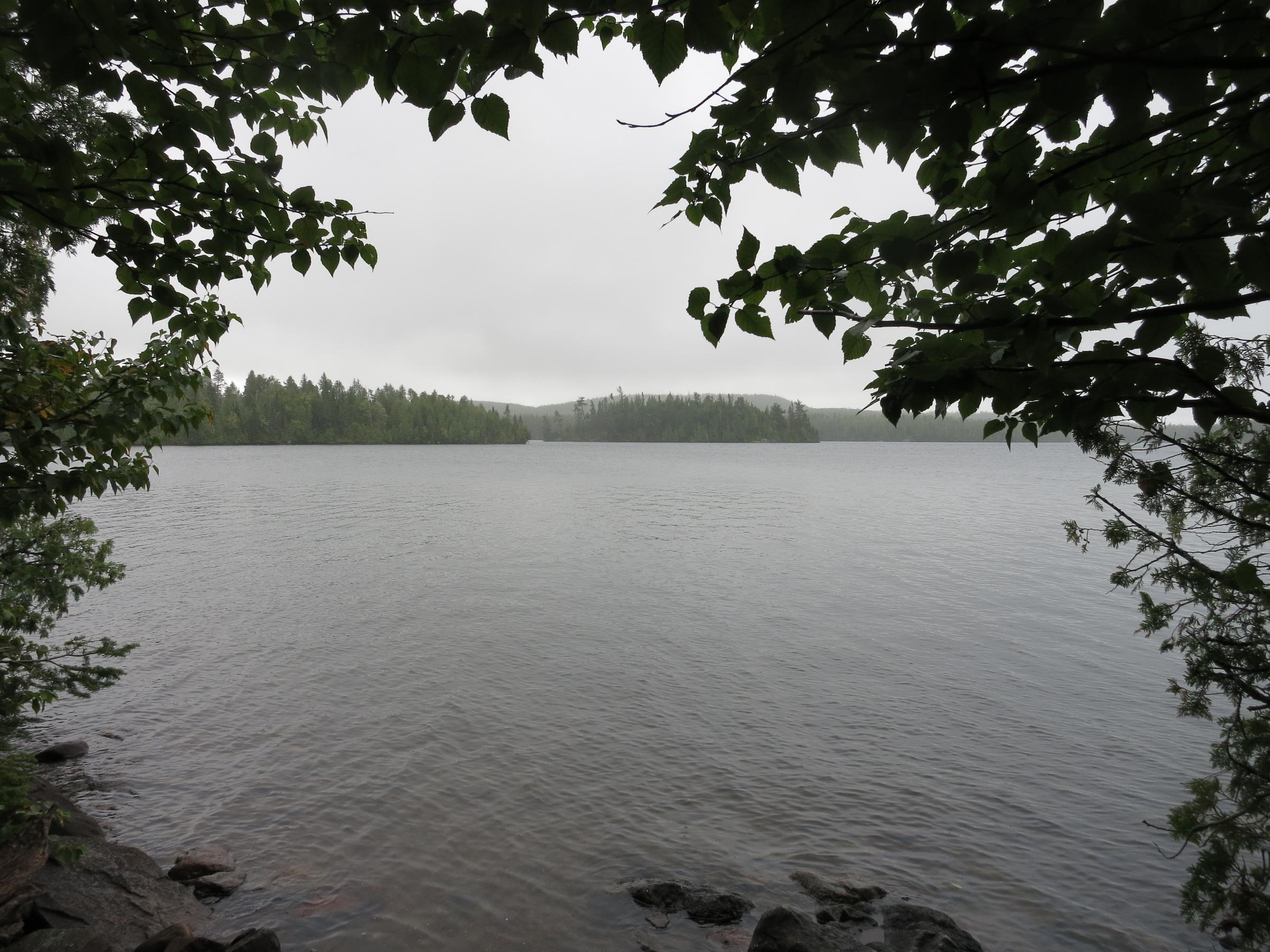 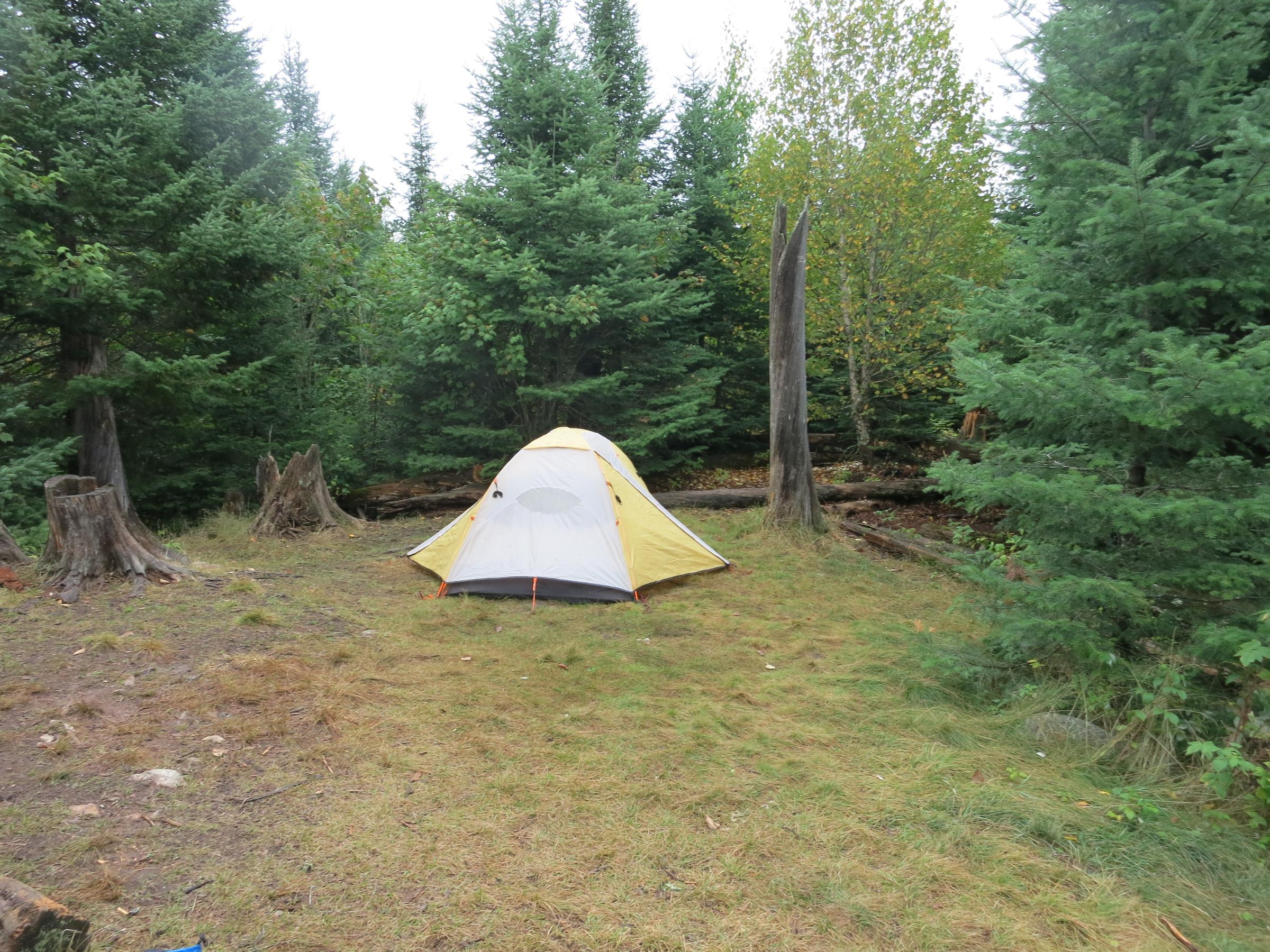