May 14, 2006. We broke camp and made our way further up Knife, eventually resettling on a nice site opposite Thunder point. Did I mention the blooming bushes? This site had lush green grass, flowers everywhere you turned and a 280 degree view of the surrounding waters. We engineered an overly complex tarp setup, pitched the tent and rigged my bear confounder. 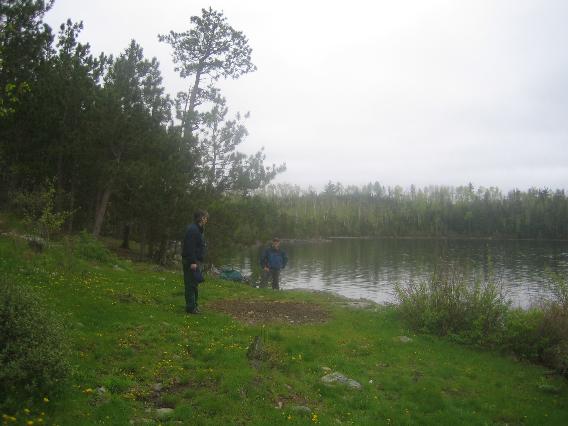 Steve and I headed out onto Knife to a location specified by John at VNO as a Laker hangout. I guess we found it, though why it was a Laker hangout was a mystery as the depth finder remained pegged at 103 feet. Nonetheless a school of Lakers was marked at 18-20 feet on my Humingbird. The winning rig today proved to be a blue and silver Rap running 3-5 feet behind a ½ oz lead weight and trolled very slowly.

Steve nailed a nice 3 lb Laker, and as he brought it in, a beautiful Loon popped up ten feet away from the canoe and watched with great interest.

What a Border County welcome!

The Loon stayed…. and frankly played with us. He would surface, do his Loon dance almost on command, and then decide to dive under the canoe. We could see him clearly diving under and we could predict his surface point within inches. We chatted with him… and he seemed to enjoy the attention… treating us again and again with his diving under the canoe trick. I actually began to worry about him hitting one of our Raps – that’d be a disaster – a Loon on the line!!!

I had marked the spot that we hit the Laker on the GPS and we retried the same spot time and time again with no further success. I decided that this one Laker would nicely feed the entire team so I clicked off the Humingbird and we returned to camp paying our respects to the watching Loon, Steve’s catch in tow.

Gena had been out in my stripper fishing (in the strange American way) with no success, he rejoined us and we paddled back to camp together.

On our return, Gena built a fine fire (another not insignificant talent) and Steve gutted and gilled the Laker. Aluminum foil was produced, and our fish was treated with sliced onions, carrots and lemon juice – the wrapped Laker covered the entire grill slightly hanging off either end over the now glowing embers.

We each had 1/3 and Gena requested the head to round out his meal. Seagulls were waiting patiently for the remains of the Laker – sitting just off the landing spot and occasionally wheeling overhead. The little that was left over, was burned in a very hot fire. Feeding the seagulls isn’t a good practice.

We retired early, with the occasional patter of raindrops hitting the tent.


Continue to Day 4
Back to Trip Report Main Menu