2nd Solo to Insula and a bit beyond
by crumpman

Trip Type: Paddling Canoe
Entry Date: 08/27/2017
Entry & Exit Point: Lake One (EP 30)
Number of Days: 6
Group Size: 1
Trip Introduction:
I didn’t take a canoe trip in 2016, due to the death of my father and father-in-law. I knew I not only wanted to go in 2017, but also needed to go. I thought about going with a friend, but going solo was always a possibility. I invited a couple of friends to go, but job constraints prevented them from going so I went on my 2nd solo. I wanted to go into either Mudro or LIS, but I was late in deciding and the permits were gone or too limited for my dates. I put out a question the solo tripping forum of where to go, on the solo forum, and Insula was suggested. I took a look at the map, checked on permits and a trip to Insula became a reality. I knew Insula was popular after having read so much about the area. I did not realize the extent of the fire in 2012, but that was OK. I made ready to leave. I was using a new hammock, an Amok, for the trip. I hung it in the back yard to make sure I knew how to hang it…more on that later. I bought very little in the way of new equipment. I’ll mention the new stuff at the end of the report. My niece moved from Southern Ohio to Minneapolis in January, so I had a place to stay on the way up from Cincinnati. The drive up was uneventful, even the traffic through Chicago was easy. I made it to my niece’s house with no problem. I did swing by Northwest Canoe to talk to Dennis about some fixing of a Bell Morning Star, which I left with my niece. I hit Ely around 2pm and got my traditional Walleye Sandwich at the Moose, poked around various shops. I checked into Paddle Inn and set the alarm early for breakfast at Brittens.
Discuss Trip: View Discussion Thread (3 messages)
Day 1 of 6
Sunday, August 27, 2017 - Rain I was up at 5:30 and made my way to Brittens. It appeared that I had beaten everybody else there. Others started rolling in around 6 as I was leaving. I went back to the hotel, finished up at the hotel, and took off for the entry point. It had rained all night, hard at times, and there was still a light rain when I hit the river. This was the first time I have started in the rain and I wore my rain gear all day. The paddling was easy as I made my way through Lakes 1-4. I was interesting to see the burn area emerge as I paddled along. At the portages into Hudson I encountered 2 fathers who were taking their 4 sons, 2 each, into Insula. The oldest kid was around 12 and they were having a good time exploring the portages. Part way across Hudson, one of the fathers mentioned how pretty Fire Lake was. He said few people stay they because everybody is heading for Insula. I had a camp marked on Fire so I pealed off and made my way to Fire. The southern, wide, part of Hudson had been burned, but as I entered the narrow part to the north that all changed to the typical lushness of the BW. I made my way to Fire and camped at the site (1372) at the east end of the lake. Nice site. That evening I enjoyed a meal of my wife’s homemade vegetable soup. I did this on my 1st solo too. I think we have a tradition started. 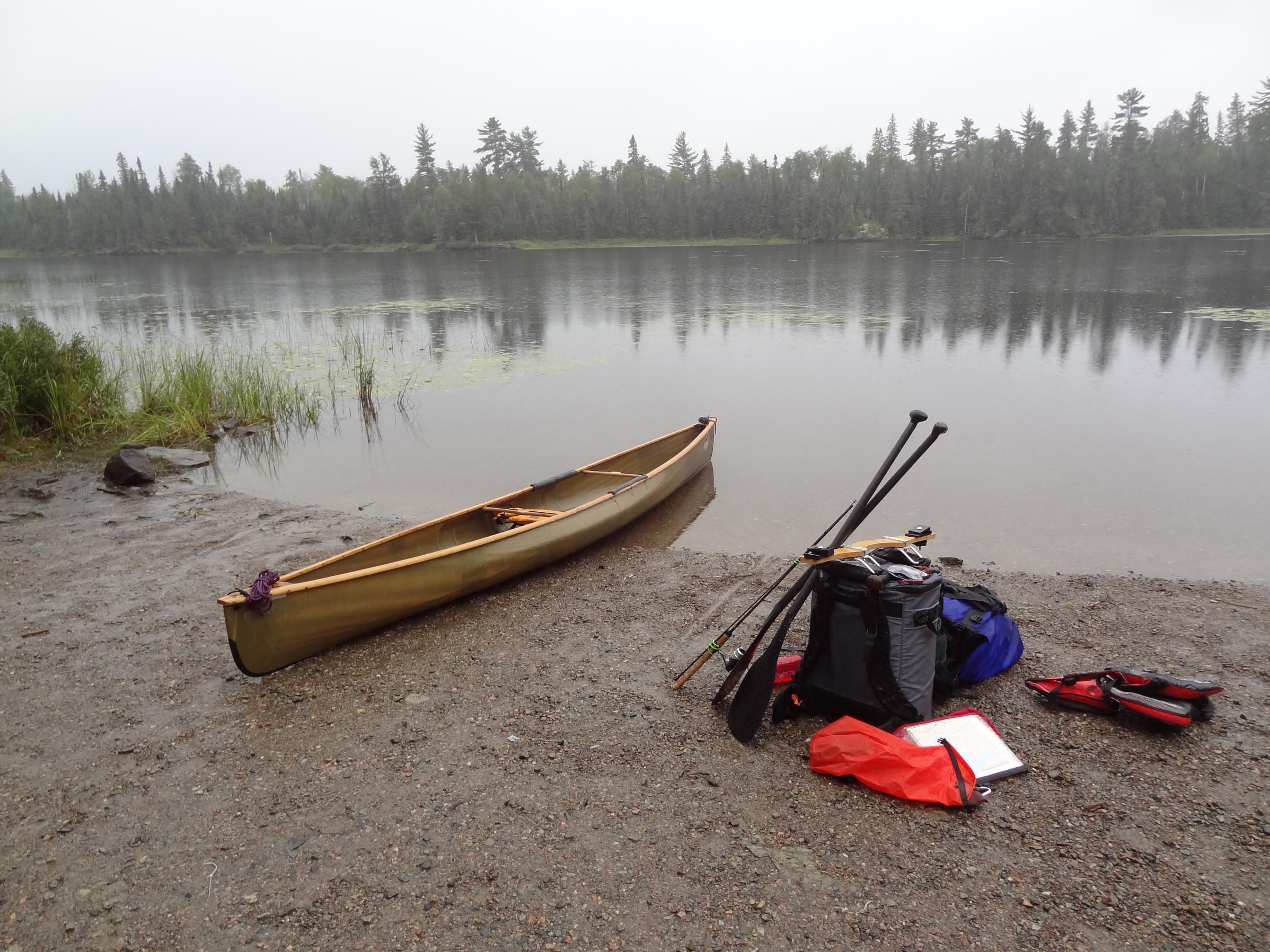 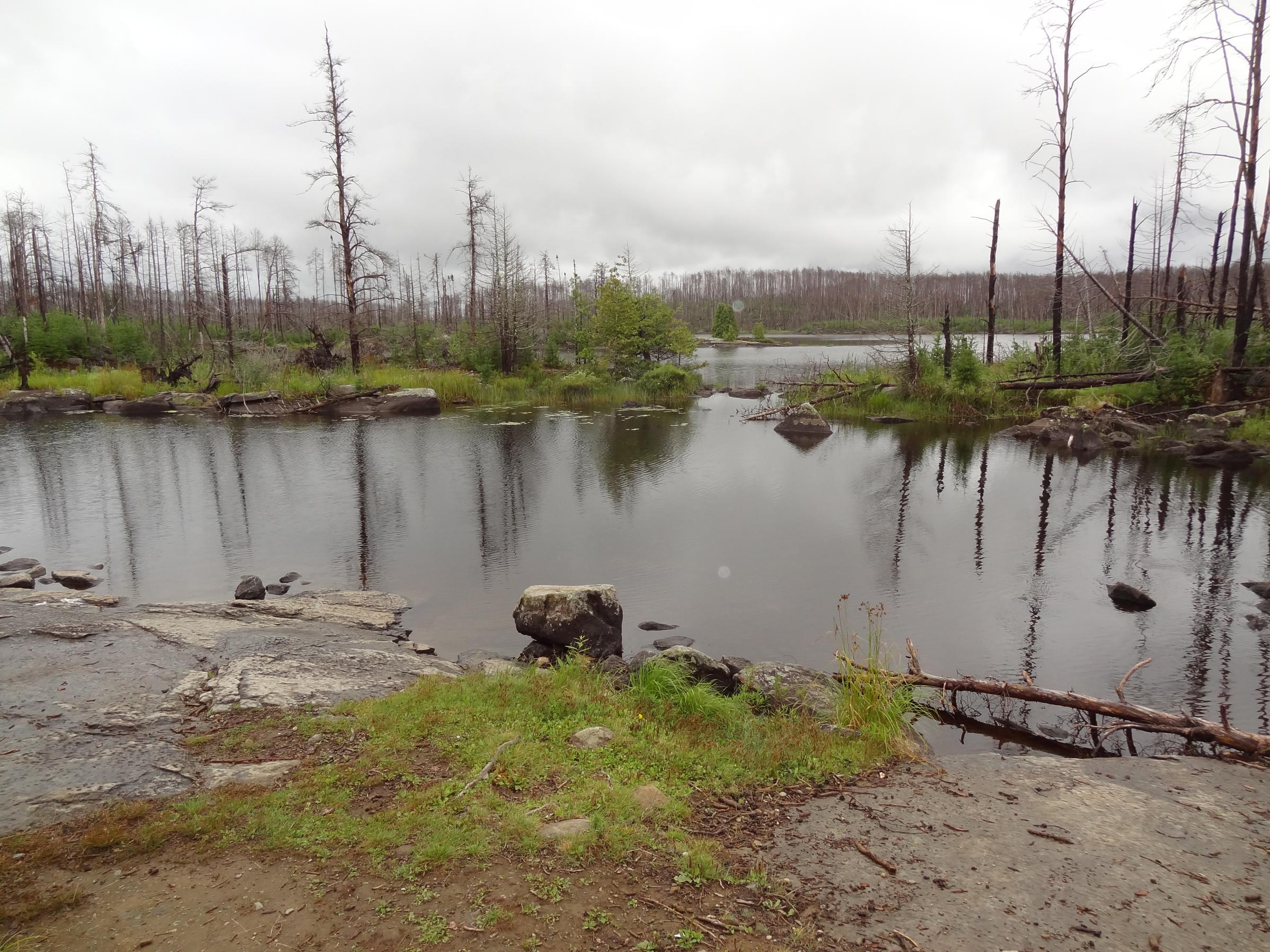 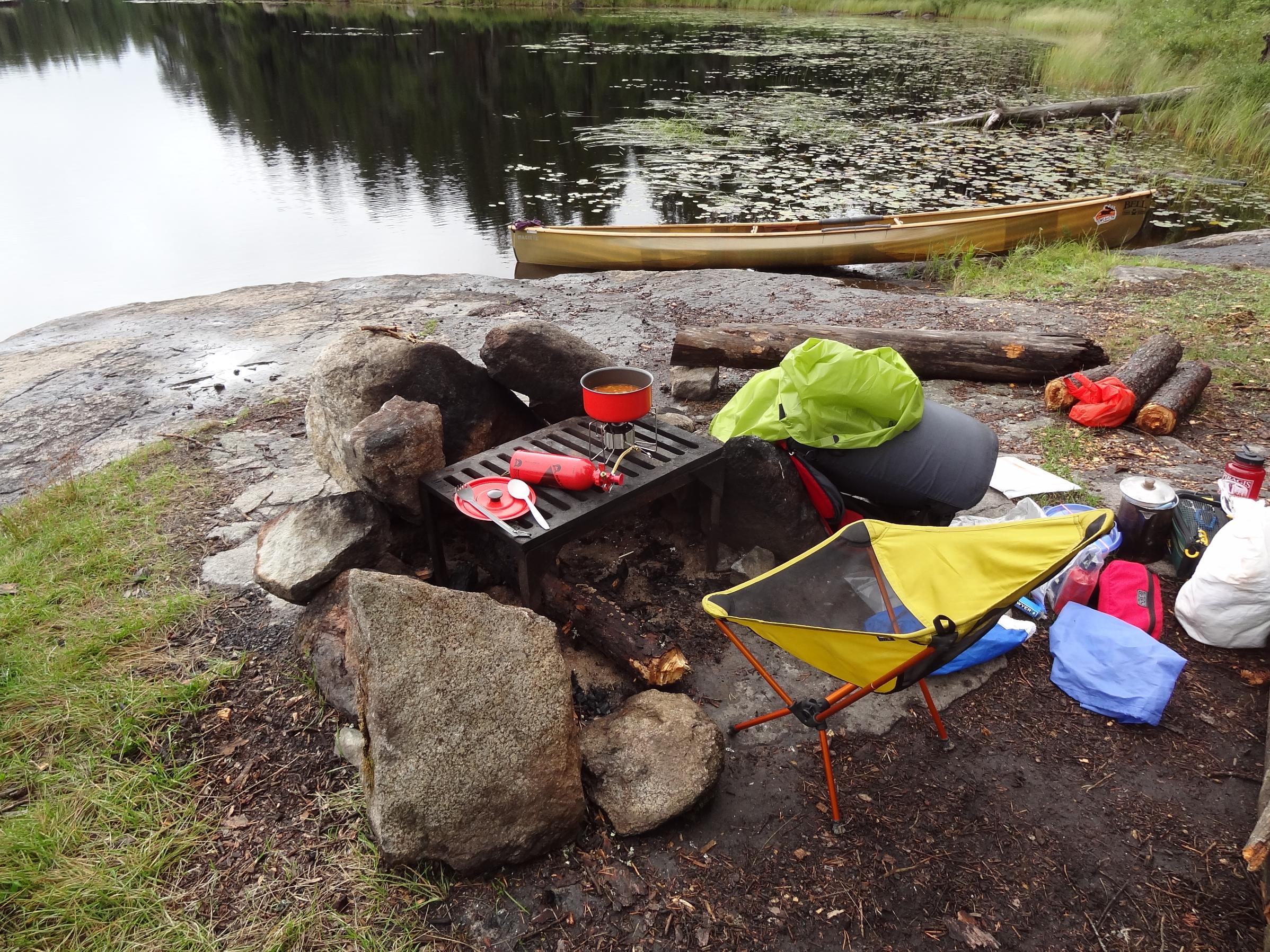