October 2017- 3 Generations of Family
by GopherAdventure

Trip Type: Paddling Canoe
Entry Date: 10/18/2017
Entry & Exit Point: Mudro Lake (EP 23)
Number of Days: 5
Group Size: 3
Trip Introduction:
My dad and I usually due an early June trip each year where fishing is the main focus, but my dad had some shoulder surgery earlier in the year so we backed things up to October to give him time to recover and prepare. Also, this is the year I thought my 6 year old son was ready to come with us, so it will become the first time 3 generations of our family would ever be in the BWCA together. We will base camp, heading in at Mudro Lake and working our way up to either Horse Lake or Lower Basswood Falls depending on how early we get started and how my dad and son are feeling along the way. We're hoping to catch fish, see the pictographs, waterfalls and plenty of wildlife while we're there. Edit: I'm attaching a video from the trip that I put together.
Discuss Trip: View Discussion Thread (5 messages)
Day 1 of 5
Wednesday, October 18, 2017 Last night my son and I left our house in Mounds View and drove up to my dad's place in Stanchfield, MN to spend the night and finish packing. We woke at 3:30 am and were on the road by 4 so that we could make it to Ely for breakfast and bait from VNO. We pulled into Ely at 7:20 which gave us plenty of time to hit Britton's for breakfast and we showed up in the VNO parking lot 5 minutes before they opened. We got the last fatheads that VNO had for the season and we were on the Echo Trail by 8:30. The parking lot at EP 23 was almost empty, just two other cars, when we got there which was a good sign. We unloaded and got on the water at about 9:15 am, lots of daylight and a tailwind to push us along. We paddled through Mudro, Sandpit and Tin Can Mike lakes and that brought us to the portage into Horse Lake where we stopped on the Horse end of the portage for a snack and to relax for a few minutes. There was a father/son paddling the southern bay of Horse when we got there and they gradually worked there way over to us. We chatted a bit and wished them a safe trip out, and we decided not to camp on Horse and try to make it all the way to Lower Basswood Falls. Once onto the main part of Horse Lake, the wind showed us just how strong it was today as white caps trailed us all the way across. A couple of times I had a hard time keeping the nose of my Northwind pointed in the right direction, but we soon made it into the shelter of the mouth of the Horse River. I've never done this river before so we made a few mistakes. We could have lined the canoe through three sets of rapids that are not marked with portages on the map, so we portaged them which made things take longer. We won't make the same mistake on our way home. So instead of doing 3 portages on the Horse River, we did 6 and it took us 4.5 hours to get to the Basswood River (I was hoping to do it in 3), but we landed at the campsite at the top of Lower Basswood Falls at 4:30 and this would be our home for the next 3 days. It was fun watching my son, Douglas, explore the campsite and marvel a the waterfall. He was like a kid exploring a new, huge playground for the first time. It was fun trying to follow him around with the camera to capture some cool moments. Douglas helped my dad set up the tent while I got some camp stove pizza cooking and we chowed overlooking the waterfall and had some Snickers bars for dessert. We rigged up our rods and tried fishing at the top and bottom of the waterfall, but to no avail and as daylight started to dwindle we got a fire going and cleaned the dishes from dinner. Douglas helped gather sticks and assorted dead and downed wood pieces for our fire (something we've been working on both at home, and while camping at various state parks this summer). I brought 3 of those pouches that kids can throw in the fire to make it light up all kinds of cool colors so Douglas threw one of those in the fire after we got it really cooking and we enjoyed the "Northern Lights" in the fire pit since the real thing wasn't forecasted to make an appearance. We spotted some shooting stars and some satellites passing overhead as it was a crystal clear night. We crashed around 9:30 to the white noise of the waterfall. ~Mudro Lake, Sandpit Lake, Tin Can Mike Lake, Horse Lake, Crooked Lake 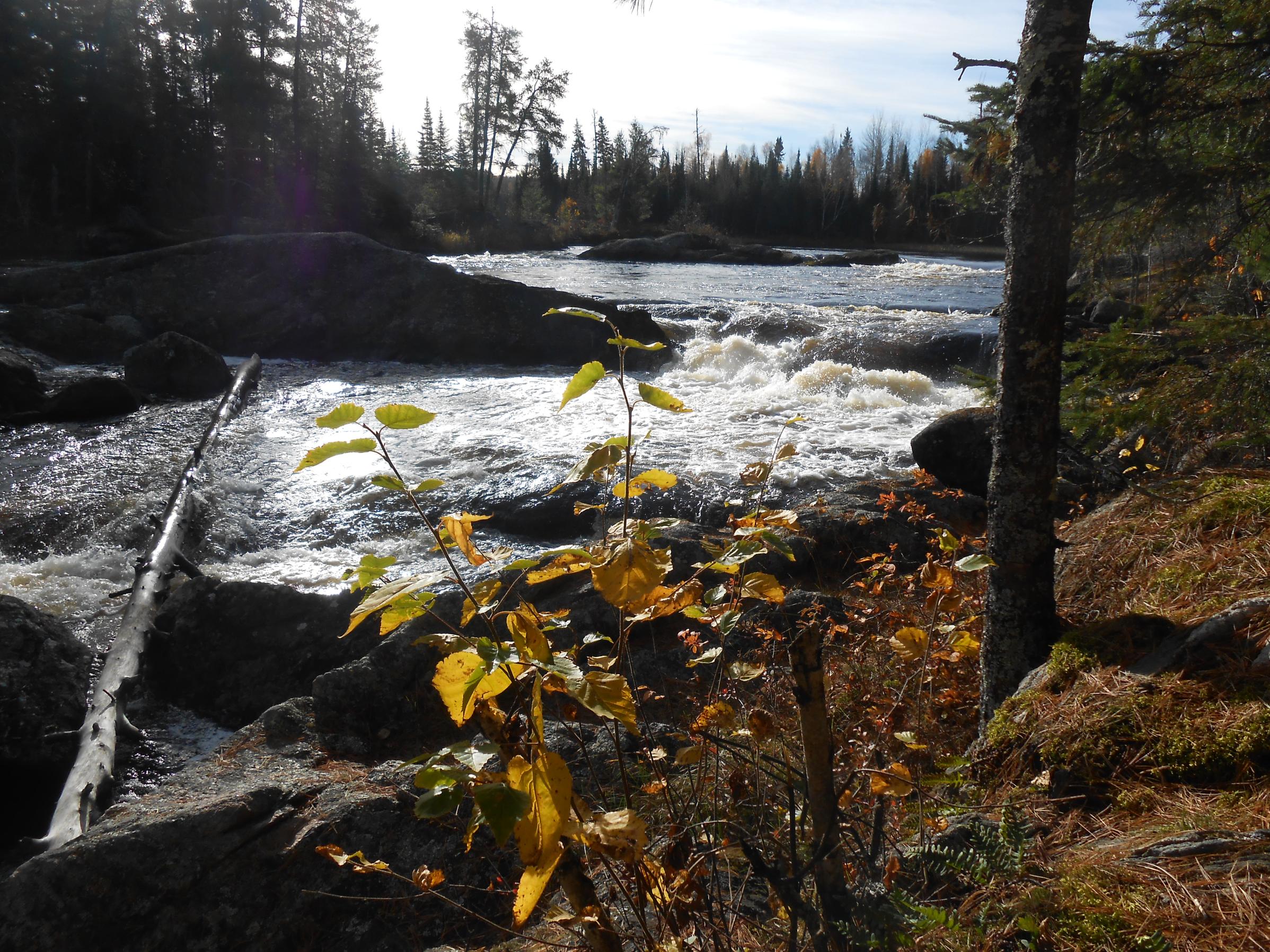 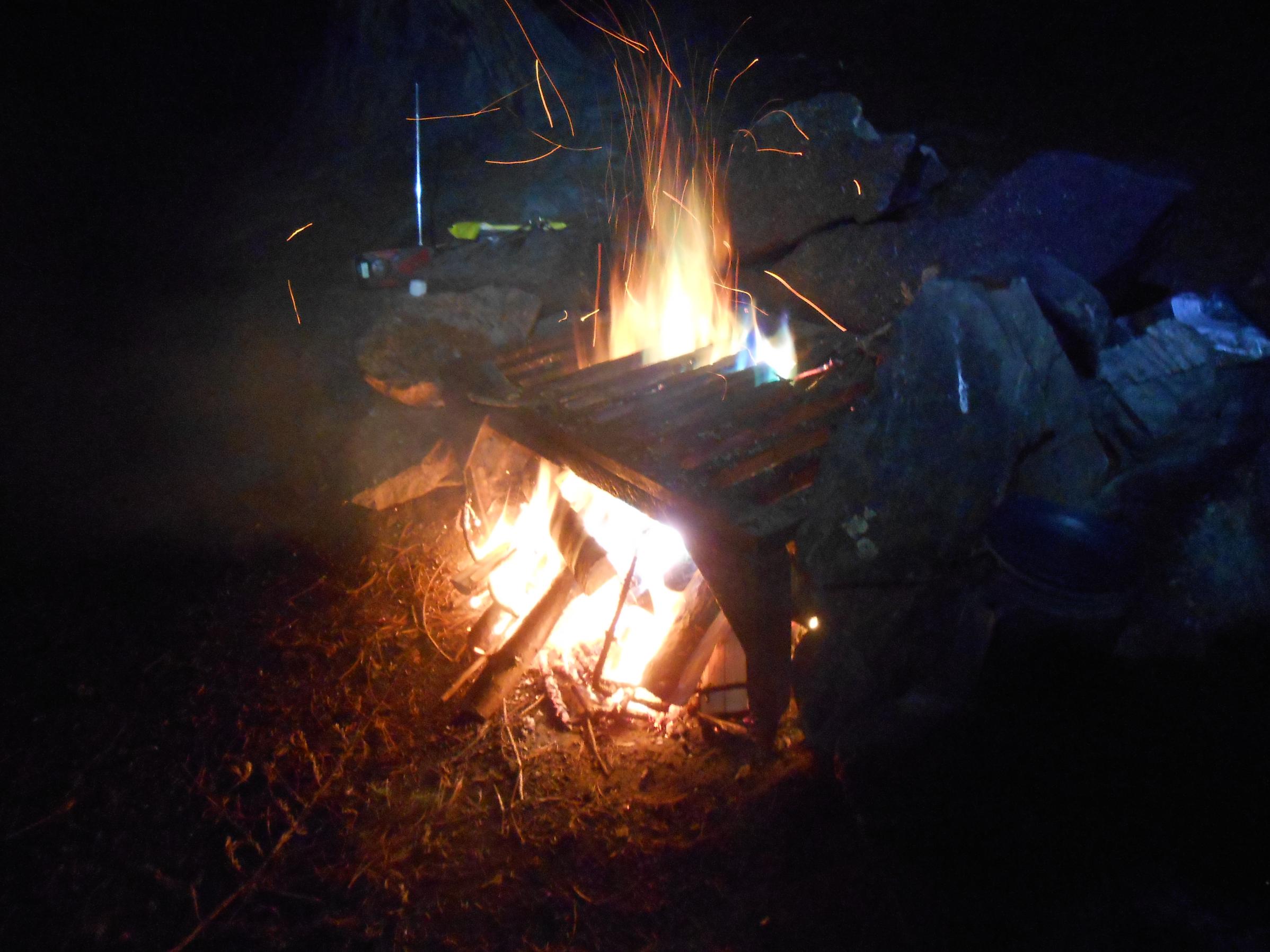