Up early and we actually took shifts eating breakfast at Britton's, which was just around the corner, walking distance. 3 stayed back and showered/organized/packed, 3 went to eat...then we rotated.

We met up with the outfitter who was providing us with canoes/pfd's/paddles, 2 food packs, gear pack, and a few other miscellaneous items.

This part is always interesting for us. Since we are coming up without our own food & gear packs, we don't quite know what all we're going to be able to fit. So we kind of yard sale everything right there out of the back of our truck, then start putting it into the packs. Slowly but surely most of it ends up disappearing into them, but we inevitably have to make some decisions...often about how much and what type of liquor is actually necessary. It becomes a negotiation....

Anyway, we got that squared away and headed off to EP 4. It's a pretty quick drive. We were taking the tow across Burntside so we got the boats in the water and helped the fellas load our canoes and gear into their boats and off we went across the big lake.

The long portage to Crab awaited us. Feeling strong, adrenaline pumping, I put on a pack AND a canoe and attempted to make a heroic push and save the group some double portaging.

So I dropped the pack and continued to the end with the canoe. I think most of the guys tried some version of single portaging as well, with varying degrees of success. In the end, nobody really made it all the way with 2 packs, but we did save ourselves some walking by not having to return all the way back to the beginning on the return.

All in all, it was not bad. It took some time, and there were some muddy feet and possibly sore shoulders, but really not that bad.

On to Crab Lake...finally paddling. I think we pretty much b-lined straight up the lake toward Little Crab, stopping to check out one of the sites in the narrows leading toward Little Crab. We were pretty set on traveling past Crab anyway, so just gave it a look-see to make sure it wasn't something amazing we were passing on. It was not.

The portage to Little Crab can be a carry over. We each put on a pack to lighten the load, then just two-man carried the canoes across. No problem.

Made quick work of Little Crab...the lone site on this lake gets good reviews, but I don't think we even stopped to take a look. I guess we weren't travel weary yet and wanted to get further in.

Paddled up the winding Korb river toward Korb Lake...there is a small portage marked on the way, but we paddled through it. You do need to take it slow and keep a watch for rocks though - we bumped a couple and maybe even got hung up once or twice. Just be careful.

On Korb Lake we did stop to check out the campsite - I had read about how unique it is up on a cliff. And that it is...unique is about the best you can say for it though. It's a steep, rugged hike up to the site, and the site itself is pretty small without a lot of good structure or area to do much of anything in camp. The view IS awesome, so it certainly has that going for it. But putting 6 guys in this site for a base camping trip was not going to be fun. So onward we pushed.

The 75 rod portage from Korb to Cummings was no big deal. On Cummings we were definitely in find a camp mode. We knew there were several highly rated sites on the lake and knew it was known to produce fish. We bypassed the first two sites as you go north because I think we wanted to see the island site first. We climbed aboard the site and pretty much all agreed it was a sweet one.

It's large and open and has an amazing view straight to the west. Sunsets would be spectacular. I was probably the only one with a major reservation, which would be that a strong wind from the west could make the camp miserable. There would be nothing stopping it at all...and that's the prevailing direction of wind in general, so I was nervous about that. I also knew the couple sites to the north had good reviews as well so I kind of wanted to go check them out, but I got overruled and the guys said 'we're staying here'. It is a supreme site, I was just worried about the wind.

There was a garter snake and a squirrel already occupying the campsite upon our arrival. The snake ran off never to be seen again, but the squirrel was with us the rest of the trip...nosy little bugger.

So camp was set up and we spent the rest of the afternoon/evening fishing nearby and took a swim. We caught a bunch of really small bass and one good eater size northern that we filleted and fried for a pre-dinner appetizer.

Evening was met with wine and drinks around the fire and an awesome sunset. Some kind souls left us some firewood that we were happy to utilize.

Headed to bed at some point...alone in my tent! Which was nice. We're usually paired up, but this trip we somehow packed I think 5 tents for the 6 of us? And the site accommodated all of them perfectly fine, so we all had our own bedroom except 2 guys. It's nice being able to spread out a bit (3-man tent) and keep your pack indoors. 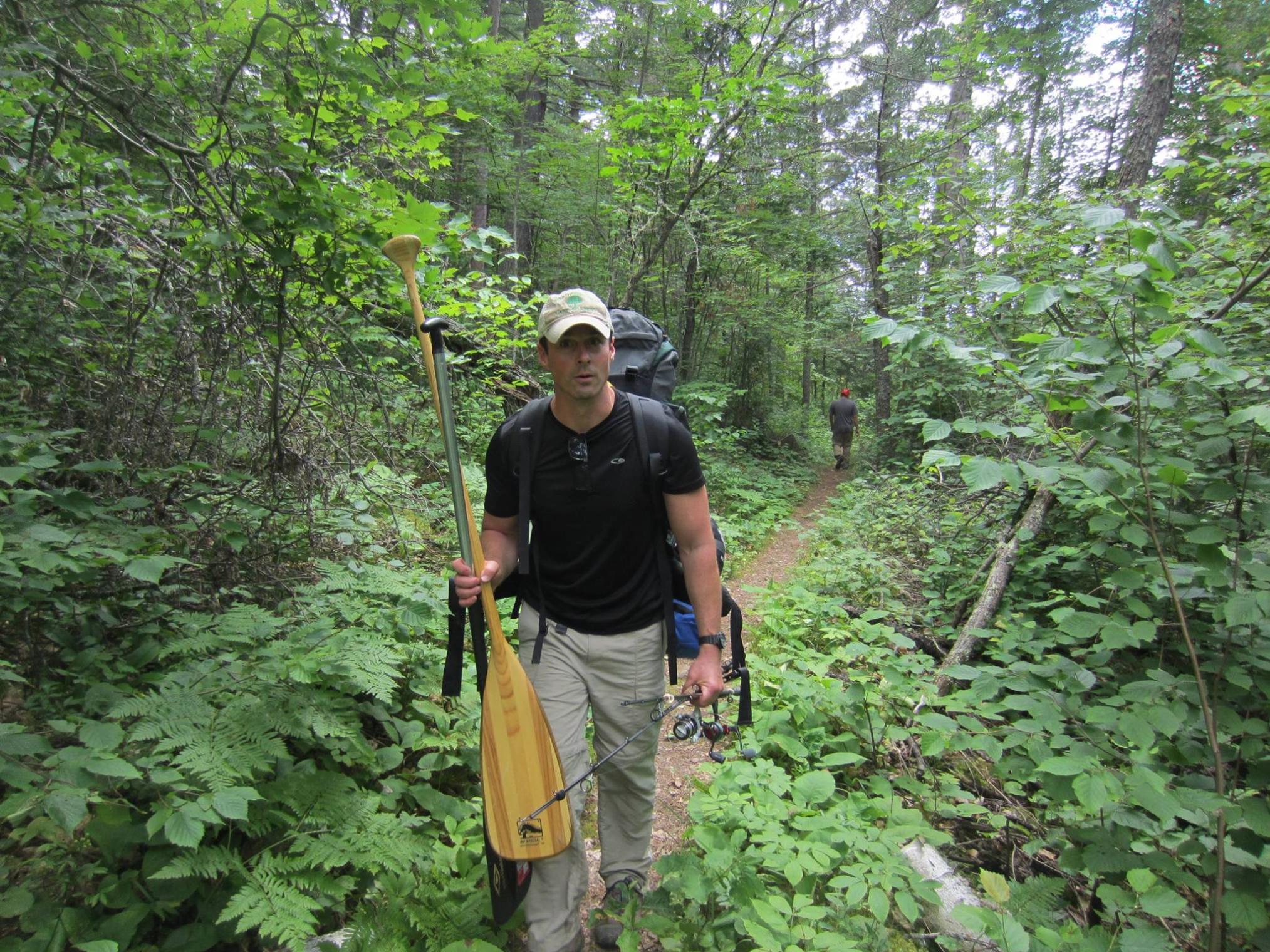 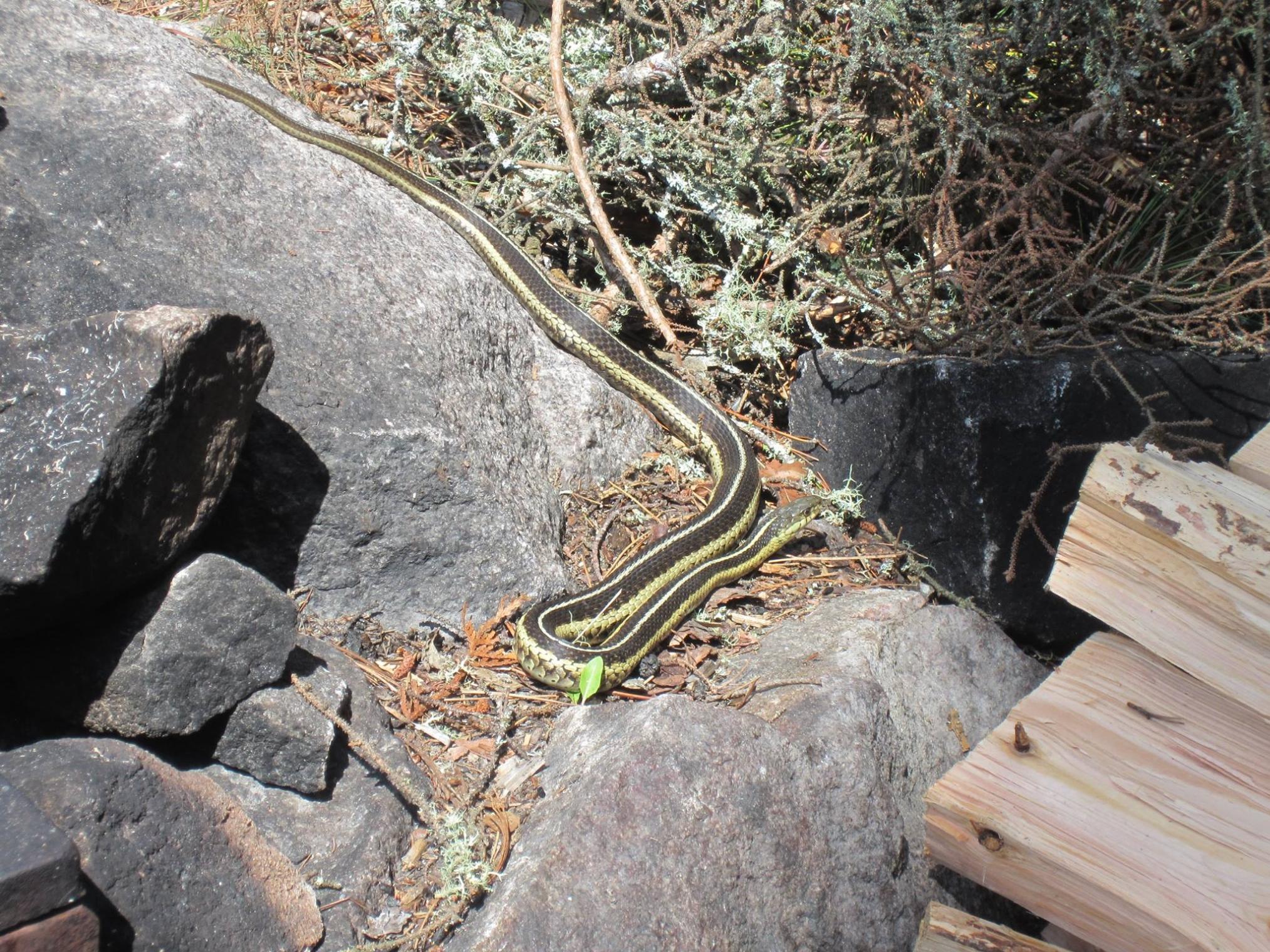 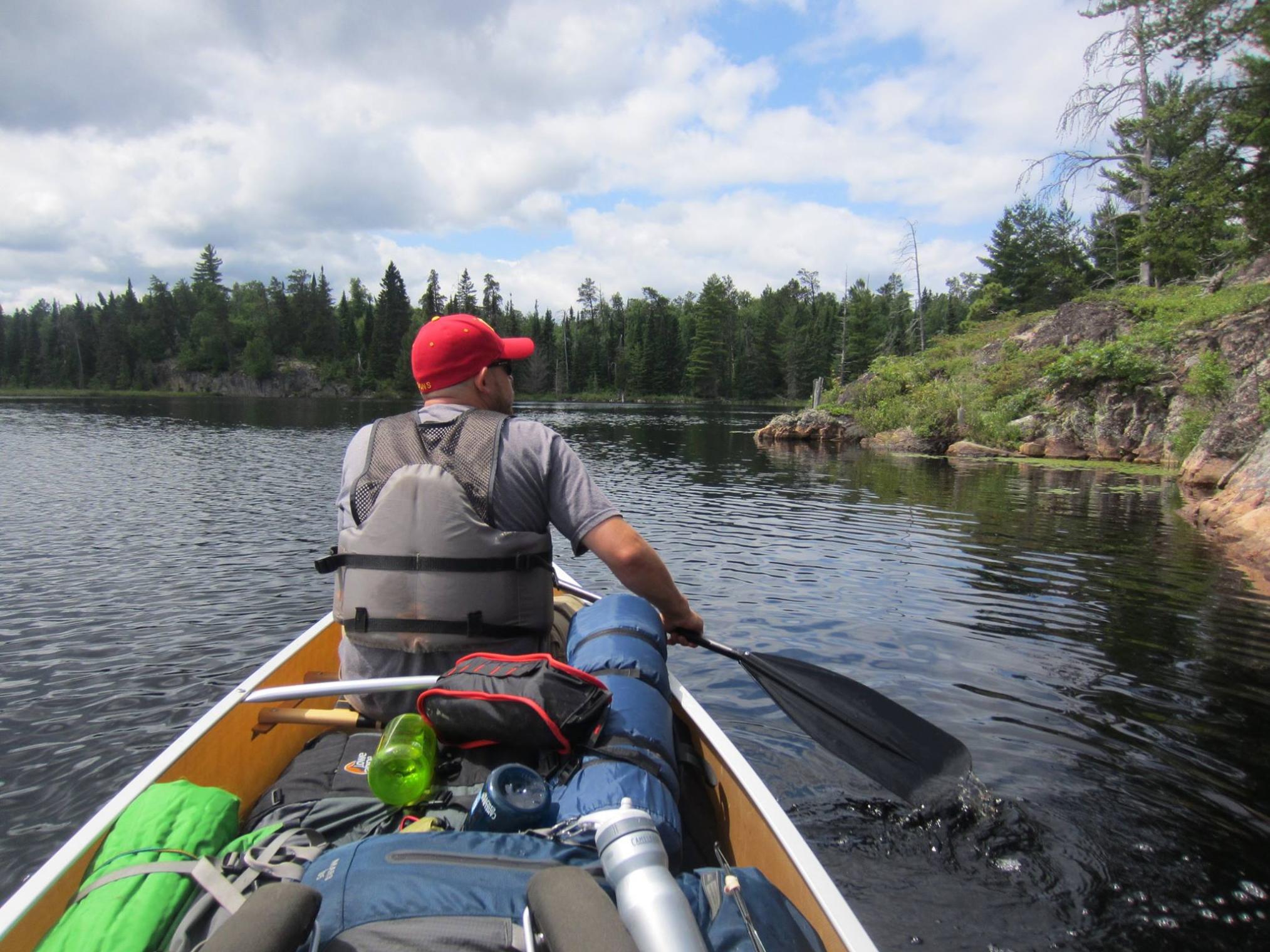 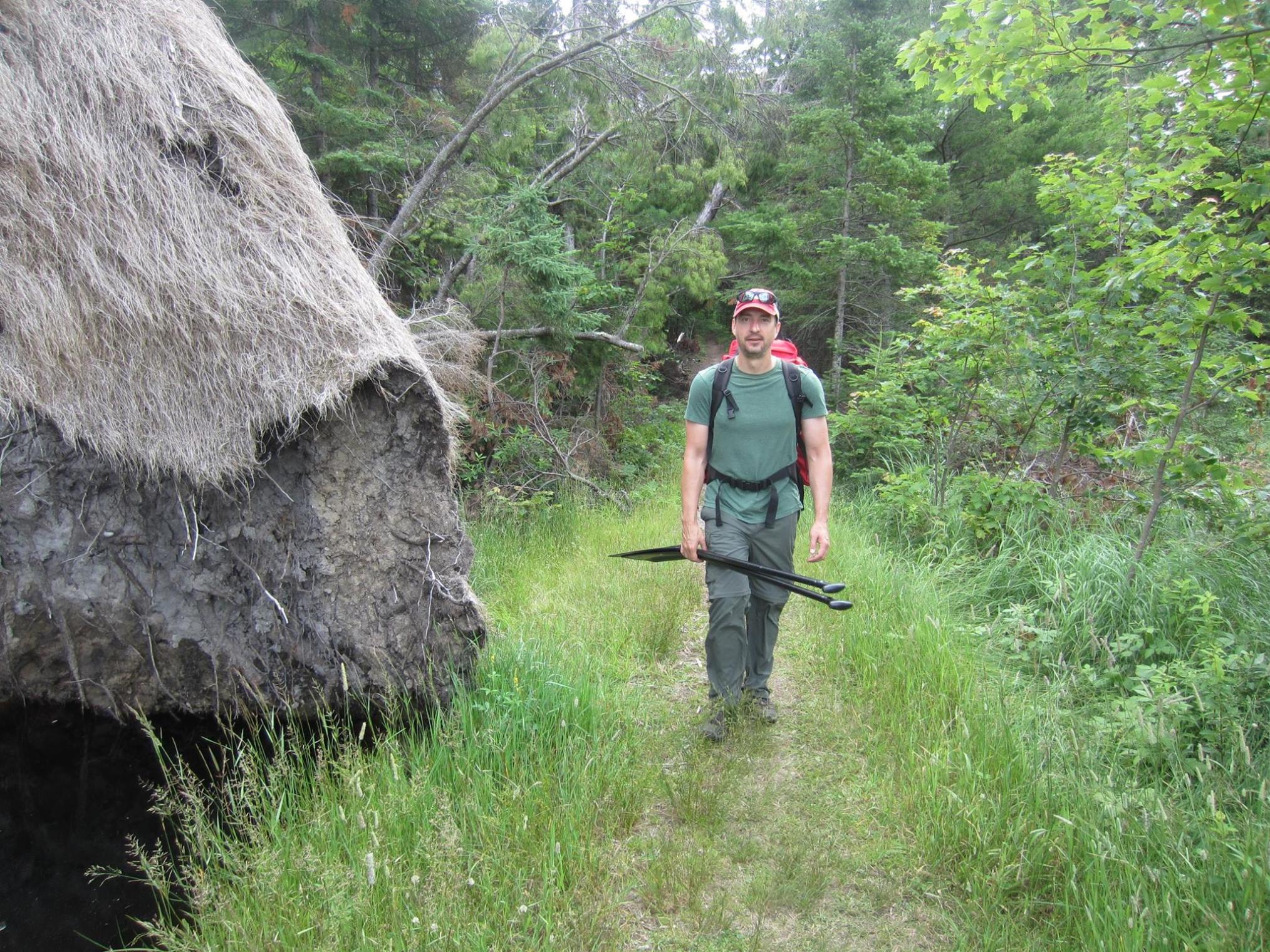 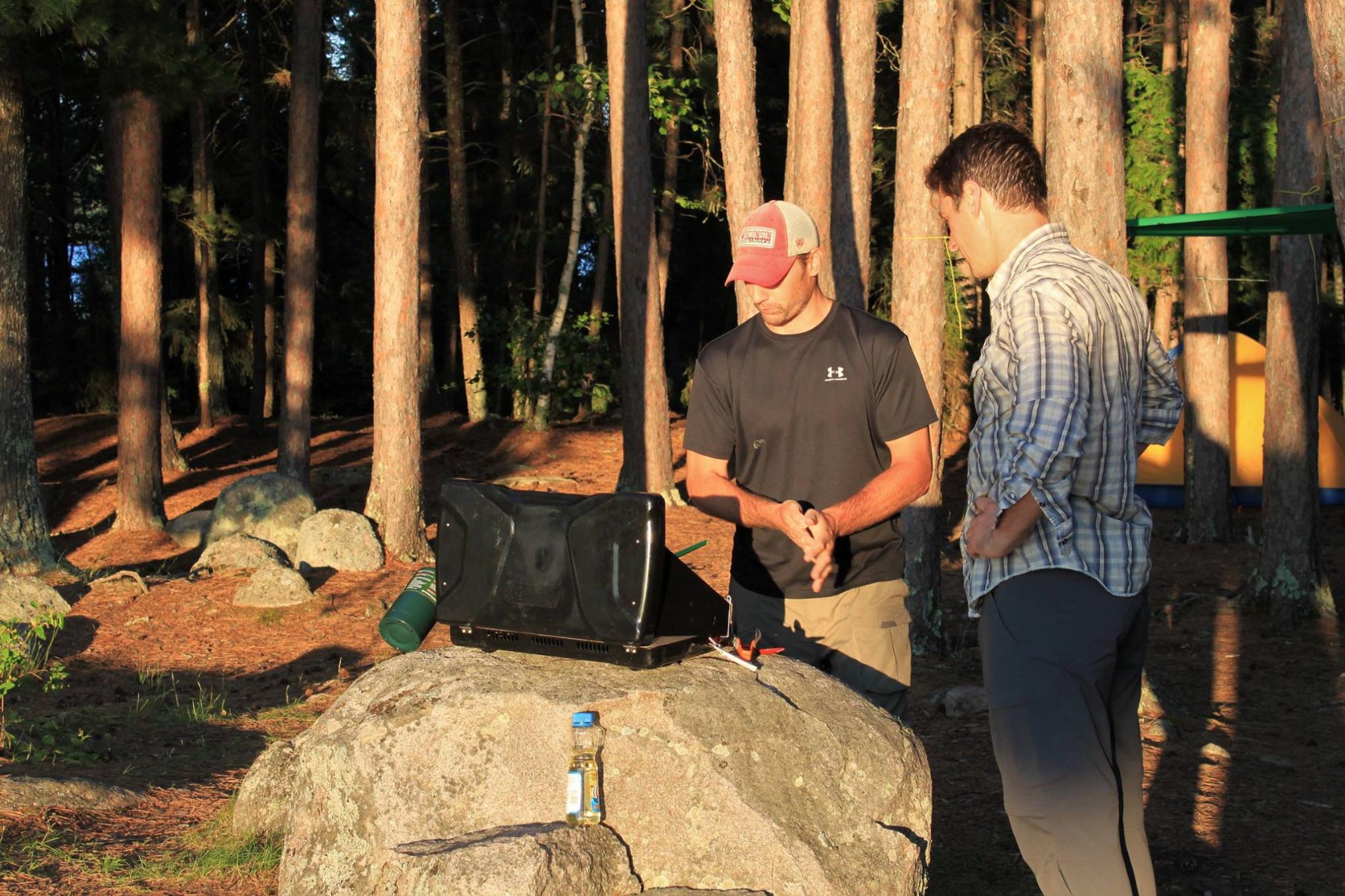