Trip Type: Paddling Canoe
Entry Date: 07/25/2017
Entry Point: Fall Lake (EP 24)
Exit Point: Mudro Lake (EP 23)
Number of Days: 5
Group Size: 2
Discuss Trip: View Discussion Thread (10 messages)
Day 3 of 5
Thursday, July 27, 2017 Today Ron and I learn just how indecisive I can be. Now, my dad and I have a rule when we are fishing together, never leave fish to find fish. Well I learned that doesn't apply in the Boundary Waters. You have to move. Anyway back to the story. Ron woke up before me, per the usual. Breakfast was ready when I stumbled out of the tent around 7. Our plan was to go see the pictographs and fish around for the day and maybe just stay here and exit down the Horse River since we were being picked up at EP 23- Mudro. So we went and checked out the pictographs and fished around with minimal luck. Just one small wally. So, I decided that we are going to break camp and head for Friday Bay. After getting packed up around 11, we started to paddle north. We didn't make it past Moose Bay before I started to think about my dad and I's rule. Ron and I debate for a while and decided we should just stay around the falls but pick a site that is a little more isolated so we don't see people as much. We head back, pick a site, drop our bags off and head back to the falls to fish. We see some people coming down from where we just came from. I asked them were they came from and they told us Friday Bay. Ron and I look at each other and he doesn't look happy because he knows what question is coming and what will ensue. So I ask the guy, "How was the fishing?" I can see his face light up an he says something along the lines of "It was great! We caught walleye everyday, at least 10 over 20" and one that was 26", we found them in the weeds just casting crankbaits." Well know I can tell that Ron is excited but displeased because he knows we should be about half way there if I wouldn't second guess myself and try to live by normal fishing rules. I ask the guy how long it took them to get down here and he said just over 4 hours but it should be less for us because the current is in our favor. I tell him thank you and good luck. We paddled over to the campsite and picked up our gear. It was about 1 or so when we took off the second time for Friday Bay. We made it up to Wednesday before making a stop to stretch. We ate a little snack and drank some water at our stop. Ron and I loaded back up in our canoe and paddled on. This was a beautiful paddle, I must say. Not many people and beautiful scenery. I would highly recommend this. I want to get back here and spend a few days in the Wednesday/Thursday area. We rounded the bend into Thursday and I thought I heard the distant roll of thunder but I told myself I was hearing stuff. We saw a family at the campsite in the narrow shortcut to get out of Thursday Bay. We said hello and asked if they had heard thunder. They said no so we carried on paddling. Ron and I were finally out of Thursday Bay and headed toward Friday when the wind picked up out of the west. About 30 seconds later we could see a wall of rain coming. We were out in the open with no option other than face it head on and paddle. This was a wicked little squall. We were hardly moving but knew we had to get off the water and we are both too stubborn to let the storm push us backwards. We paddled with everything we had in us towards an island ahead of us. I wasn't stopping to look at the map to see what island it was. After what felt like a half hour we reached the island and it had a campsite. The skies parted and the rain stopped as soon as we reached land. I was soaked and freezing now. I actually laid down on the rock face of the island without a shirt on and it warmed me right up. This campsite was pretty nice so we decided to stay here and dry things out. It is the island site between Friday and Thursday. We set up camp and put up our clothes line. It was fishing time, after all that is why we just paddled 3.5 hours. Ron and I both caught some smaller pike but nothing really spectacular. We went back and cooked up dinner, ate it, and headed back out fishing. We came into a bay and were marking fish on the fish finder but we weren't catching them with our topwater baits. I quickly switched over to my other favorite bait, a 1/8 oz. pink jig with a shad colored zoom boot tail fluke. First cast and I hooked into my first walleye of the trip. Ron quickly switched over to the same set up. It was game on from there. We caught roughly 30 walleye in 45 mins. To this day, that is still the best 45 mins of fishing in my life. I think some baitfish got pushed into that bay from the storm and the walleye capitalized on it. We just happened to be in the right place at the right time. 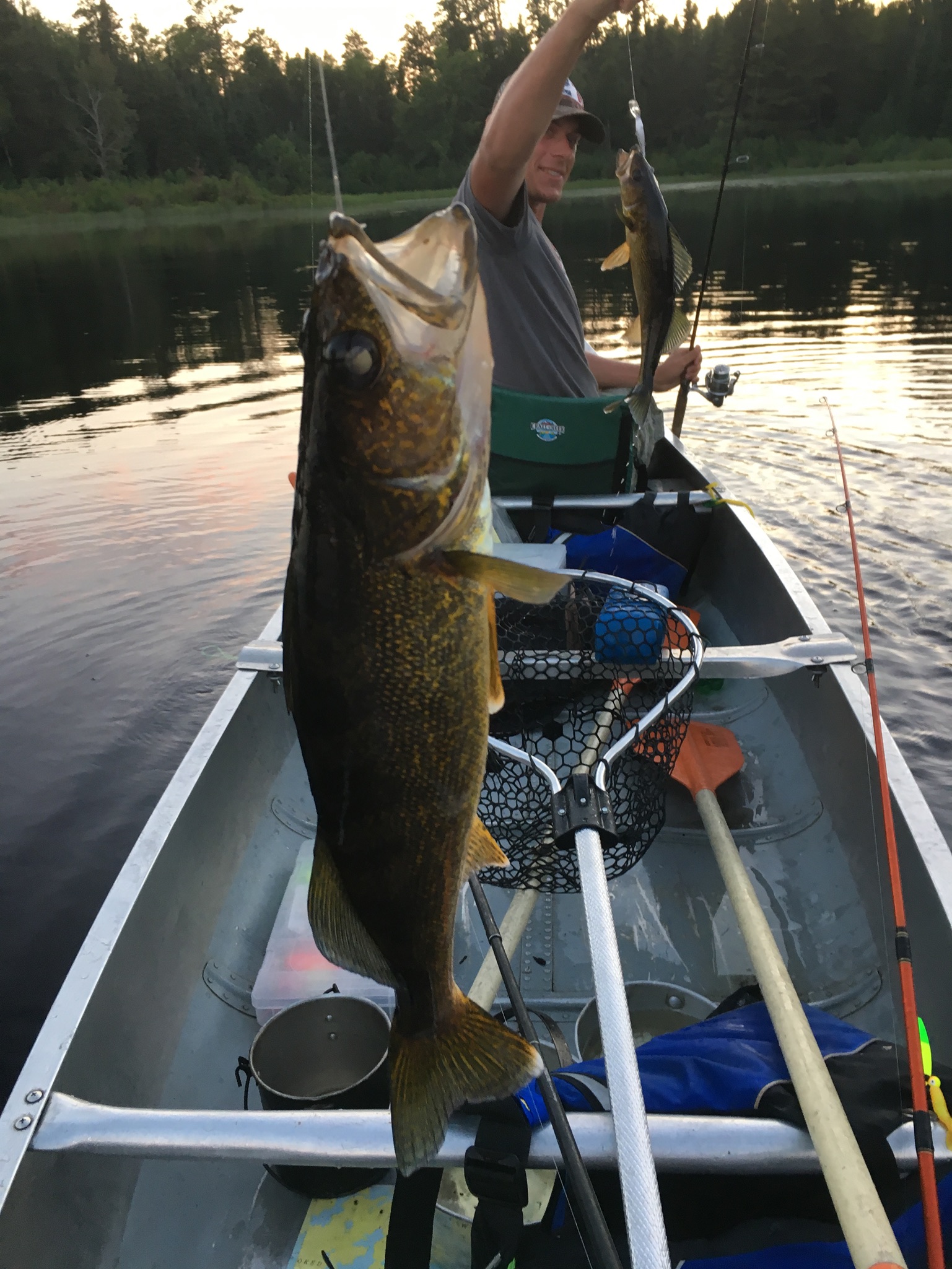 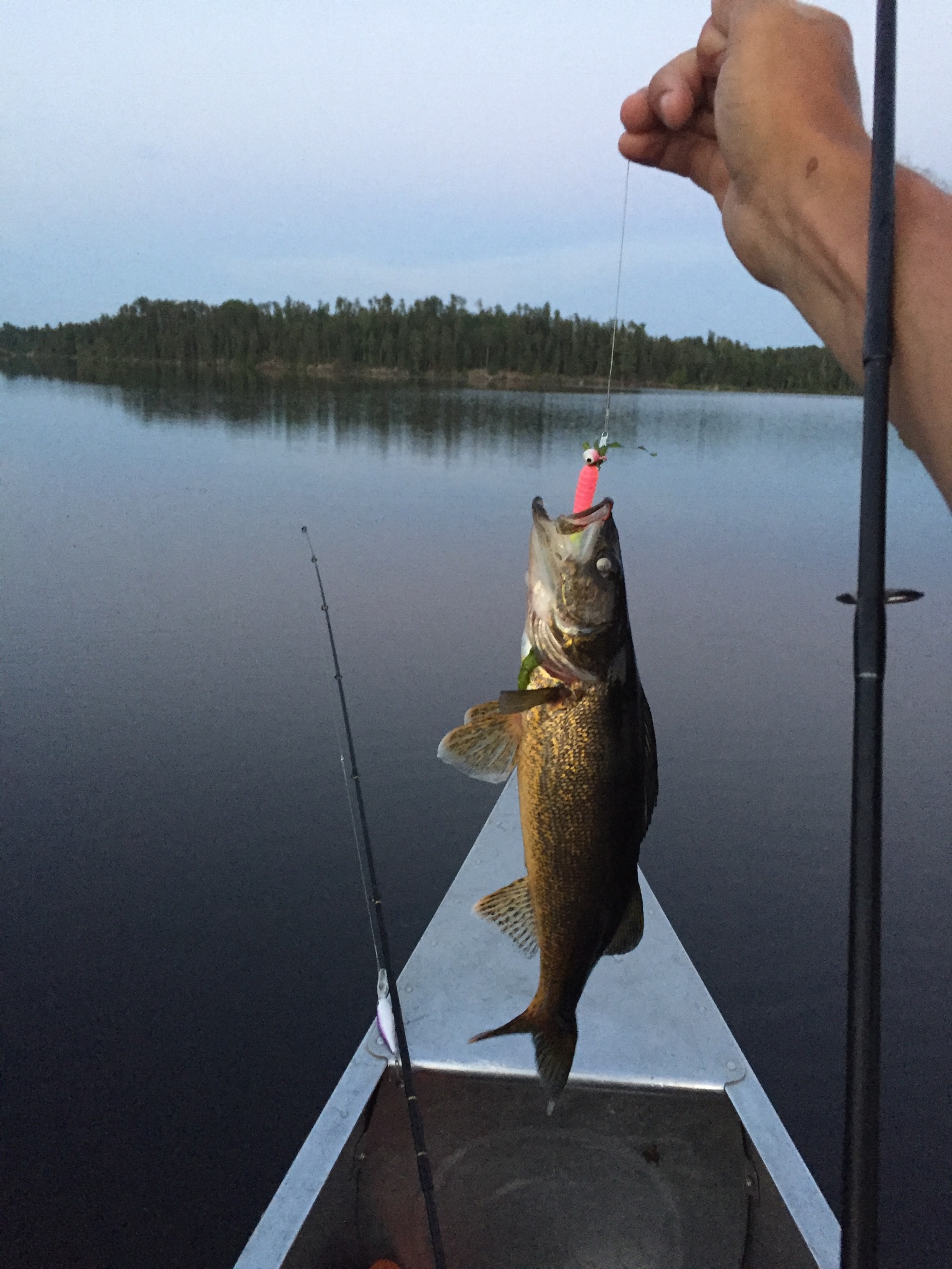 Now I know both of the fish with hooks in their mouth aren't hooked to my jig/fluke set up but its because I kept changing lures to see what they wouldn't bite on. Which was nothing. They were hungry. We ended up keeping two to save for breakfast. We fished until 9:30 then headed back to camp. We were both extremely happy we paddled all the way here, fought the storm and stayed at the site we did because it paid off. I slept great that night after finally having a great day of fishing.