A warm partly cloudy morning greets us as we crawl out of the tent. Aurora tries her luck fishing from shore while Vickie & I get breakfast going. Our plan is to eventually travel to Little Trout Lake later this morning. 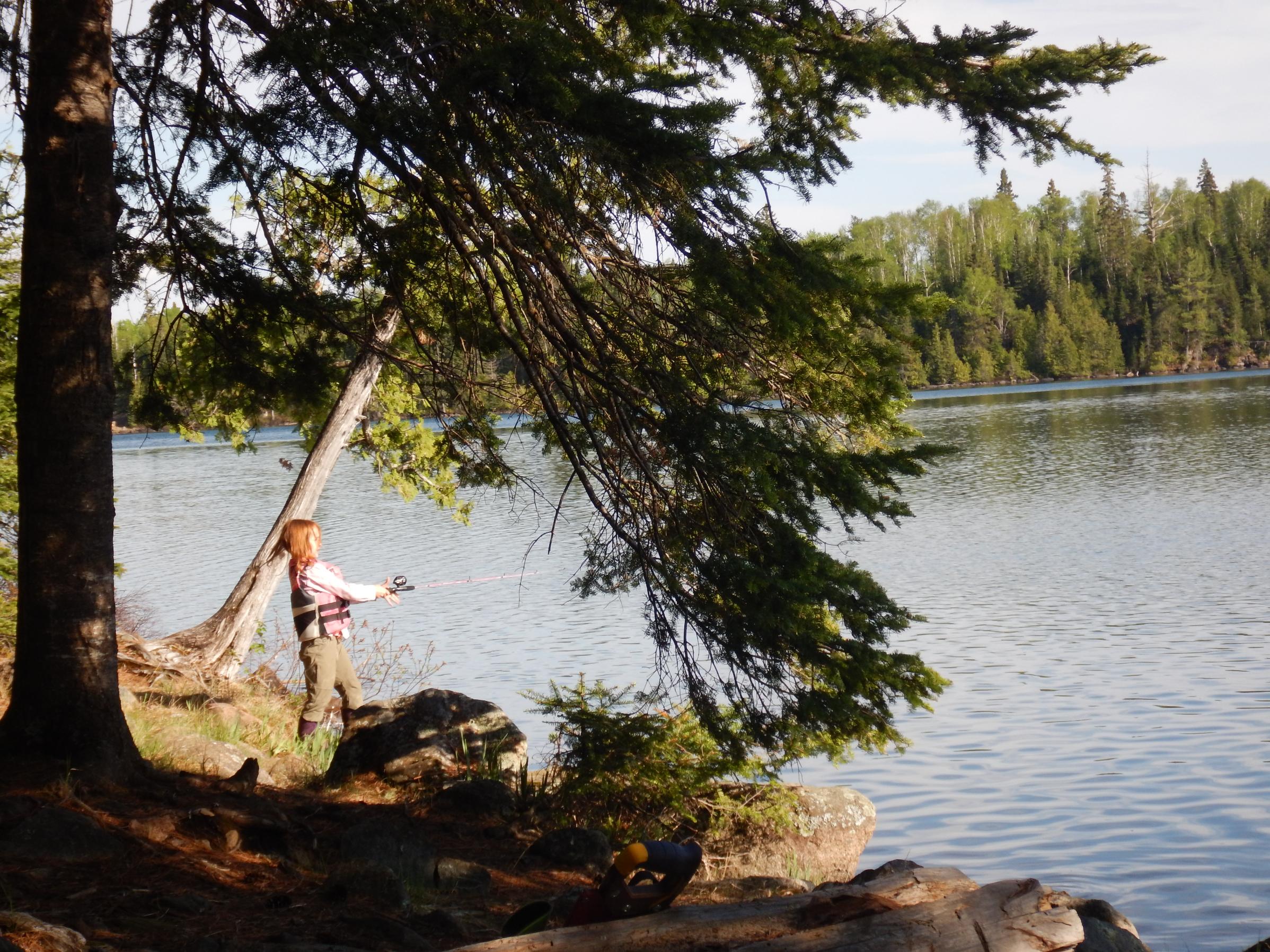 Mercifully the mosquitoes are still not at the peak of their powers as we cross over to Kroft Lake. There is some interesting colorful moss clinging to the steep rocky shoreline (near the portage) of this otherwise low lying lake. Even though it's still May, the weeds are already beginning to choke the surface of this shallow waterway. 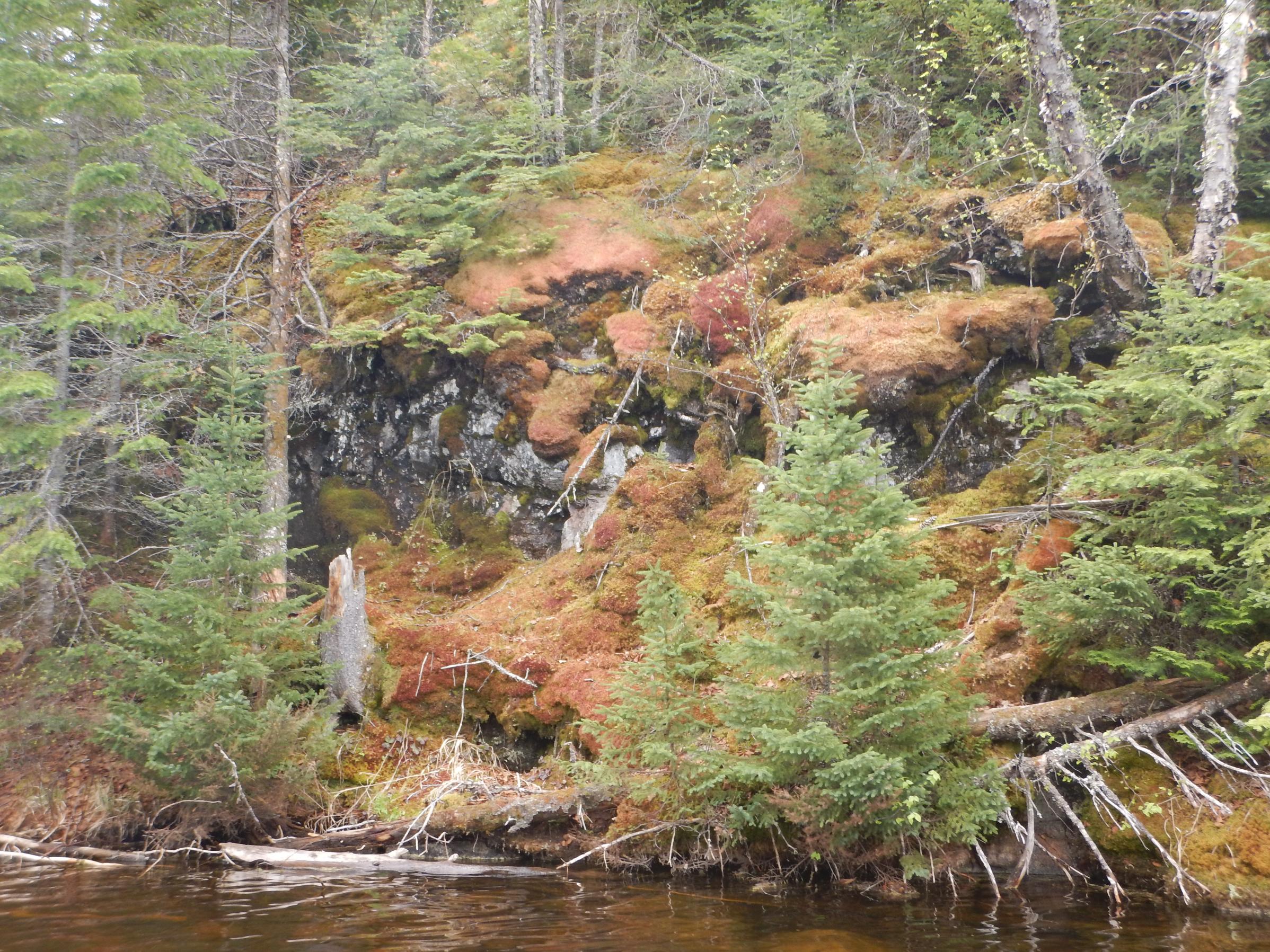 At the far western end of Kroft, our next portage into Rum Lake is easily located. This portage is much more forgiving than the others we have crossed thus far. Only a gentle rise over a decent path that sports an occasional muddy spot.

The high rising far shoreline of the western end of Rum Lake indicates that will not be the case for our next portage. As we approach or next portage we paddle past a diminutive, though pretty, island. While still a good distance out from shore, we perceive that the only likely spot for a landing is a mass pile of shoreline boulders. Sure enough, this is the portage! While, the unload isn't quite as cumbersome as at first predicted, it's still a bit of a scramble over the mess of boulders. 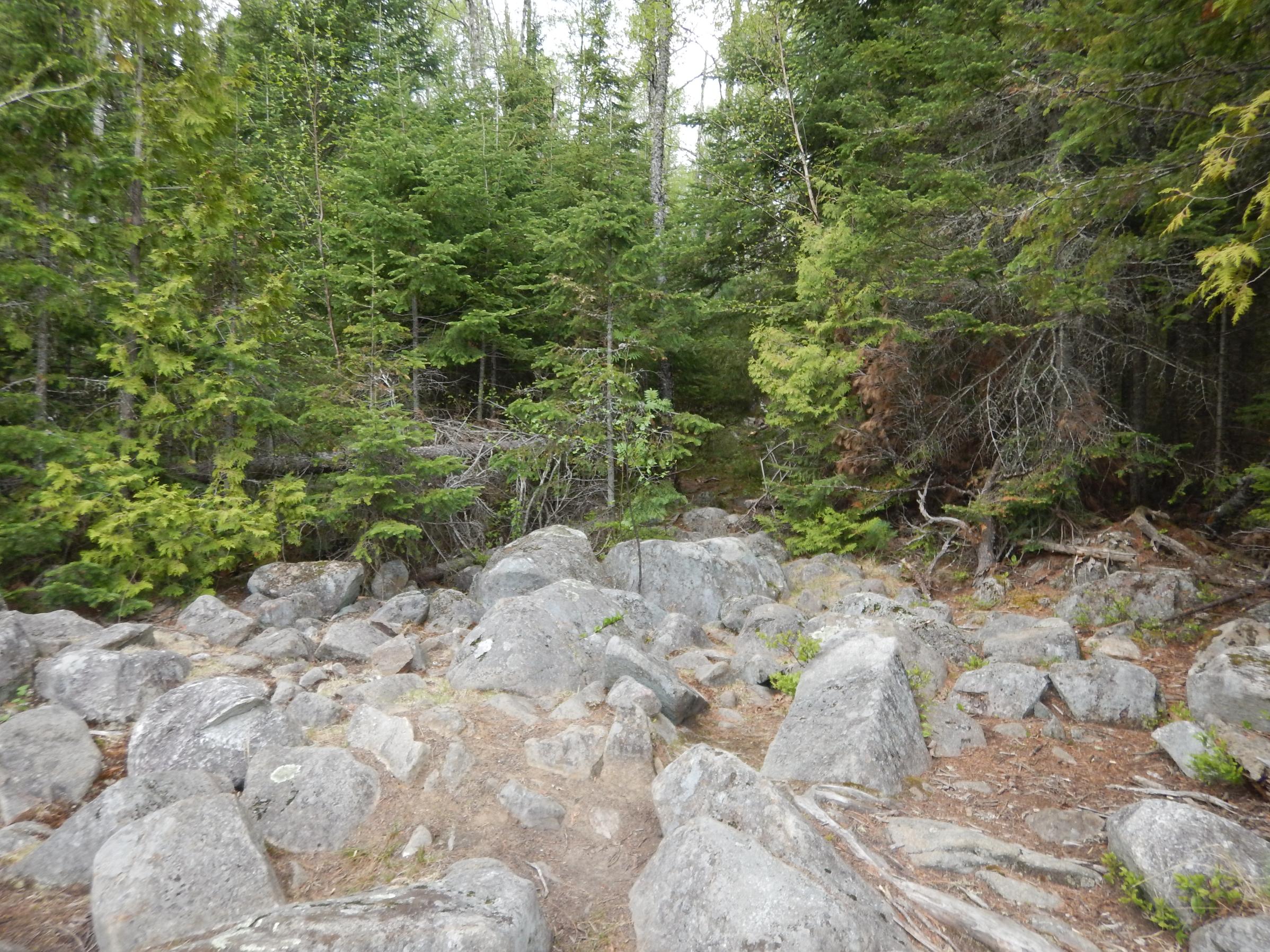 Even though the sheer volume of boulders decreases as one enters the woods, the traverse doesn't necessarily get any easier as the trail begins it's steep ascent up and over to Little Trout. As we near Little Trout the trail tapers off a bit just before reaching another boulder laden landing on this lake. Although, I will say, this one is a bit more accommodating.

From here, there is a nice panoramic view of the island campsite which is right out from this landing. Grabbing a Clif bar and snacks, we stop and catch our collective breaths and recharge a bit. 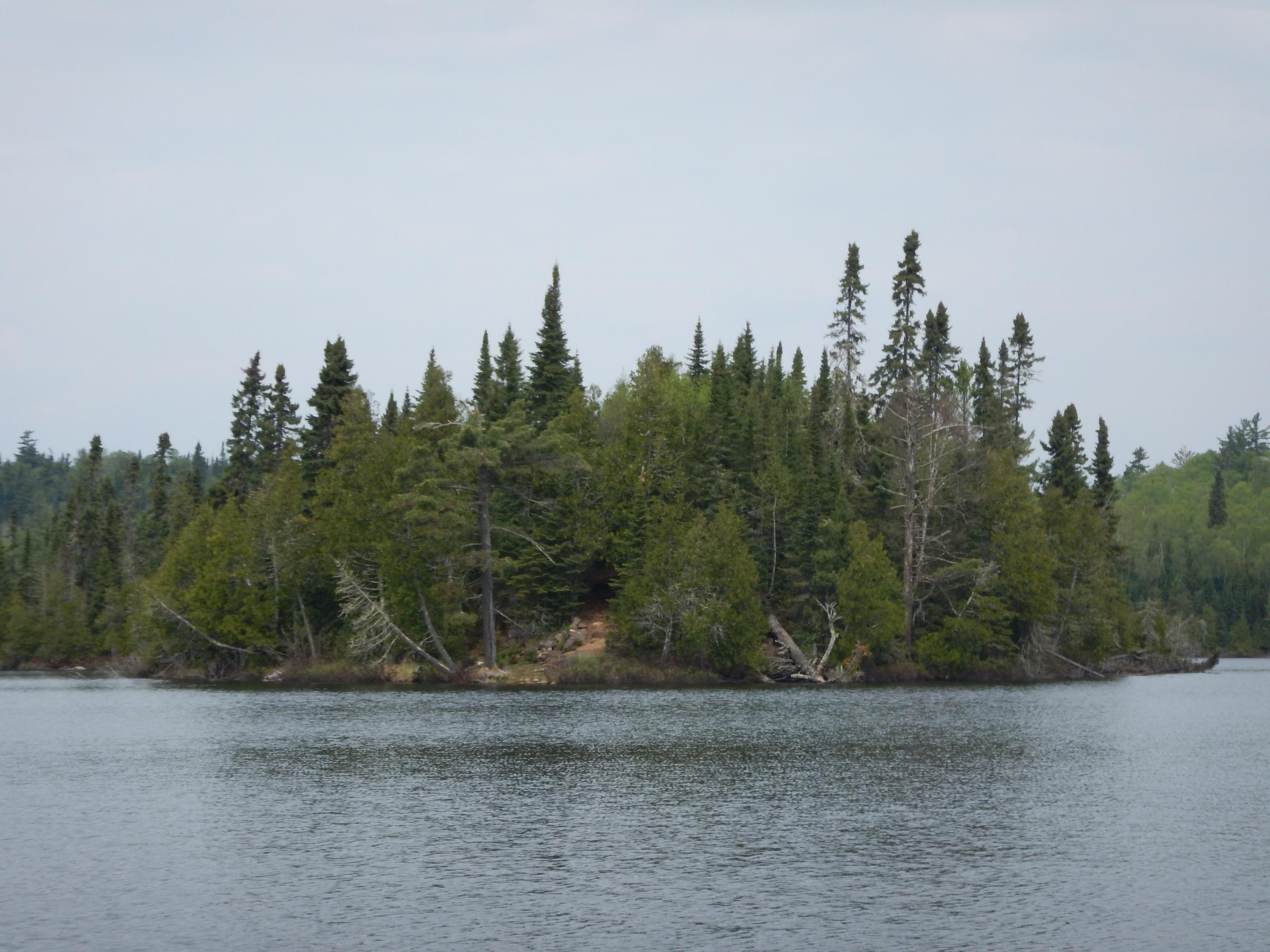 Shoving off, we paddle west. No sooner do we pass by the islands, when Aurora reels in a nice lake trout. The clouds are also beginning to clear off and, for the time, we have a marvelous time paddling around this majestic lake. The massive white pines that are lightly peppered around the high hills that rim the lake provide a beautifully stark contrast to the soft pastel of the multitude of deciduous trees that dominate the forest. It is enticing views such as this that scintillate the sensory palette and create such a beautiful wilderness backdrop. 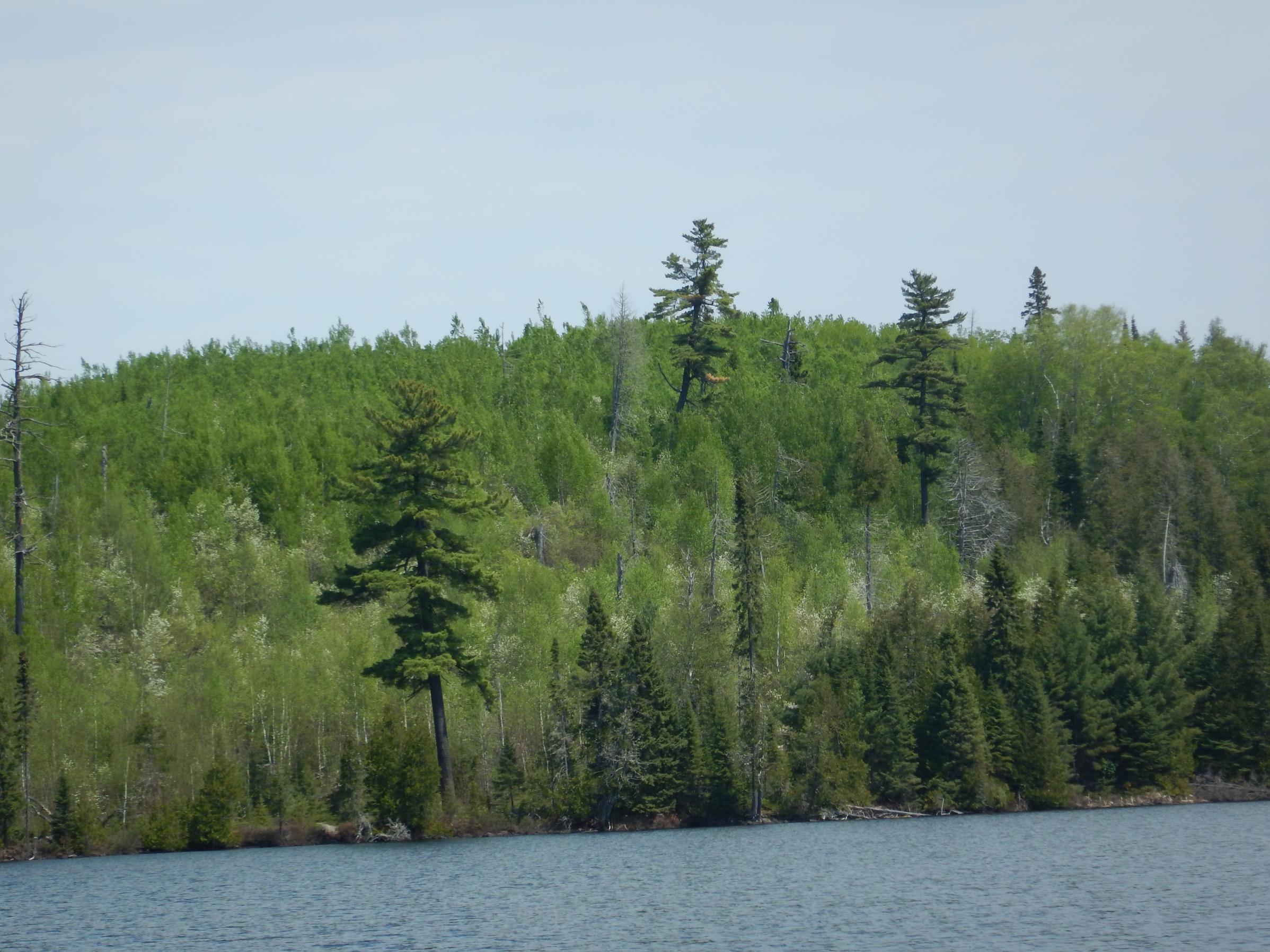 For the time being, it appears that Little Trout Lake is all ours. As there is no one to be seen in any direction. Eventually we pull off to the campsite closest to the daunting portage into Misquah Lake. In my opinion, none of the campsites on Little Trout are anything too spectacular. Which is another reason we decided to pull up short yesterday. Never the less, this site offers a bit of room to roam as Aurora and I play hide and seek while Vickie prepares a quick Mac & cheese lunch. 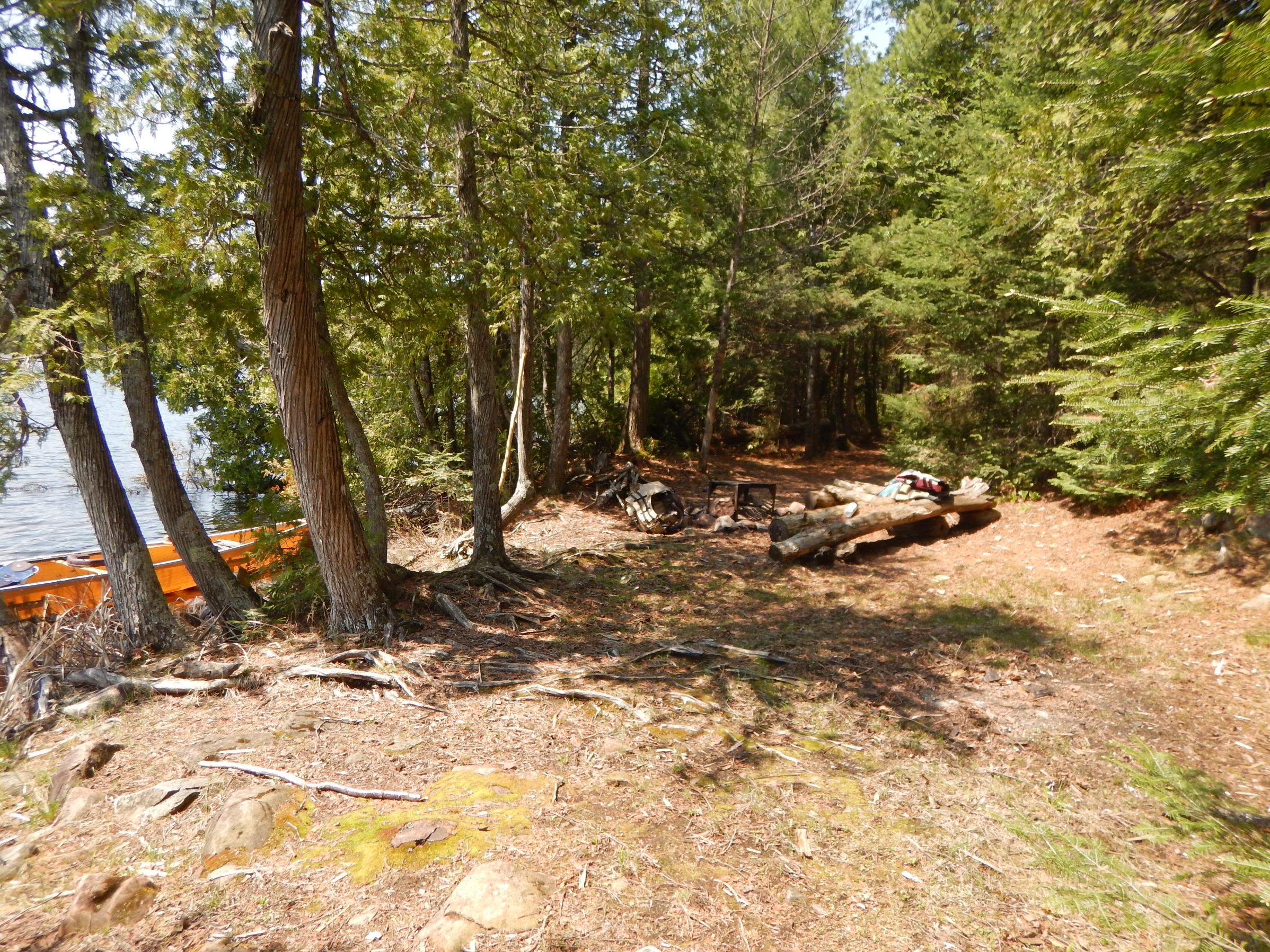 Back on the lake, I eventually discern that rapalas seem to be the winning ticket (lure)for today and get everybody switched over. We have fun reeling in a few more lake trout and decide to keep one for supper. Of course we were quite concerned when she first asked but, Aurora is even able to deftly (without impaling one of her parents) cast her line while sitting in the canoe. Not sure where she picked up those skills? But, maybe all this camping stuff is just naturally wearing off on her? Amidst all this excitement the weather has taken a turn for the worse, with dark clouds massing on the distant horizon. So, we pull into the vacant island camp to hunker down - if necessary. 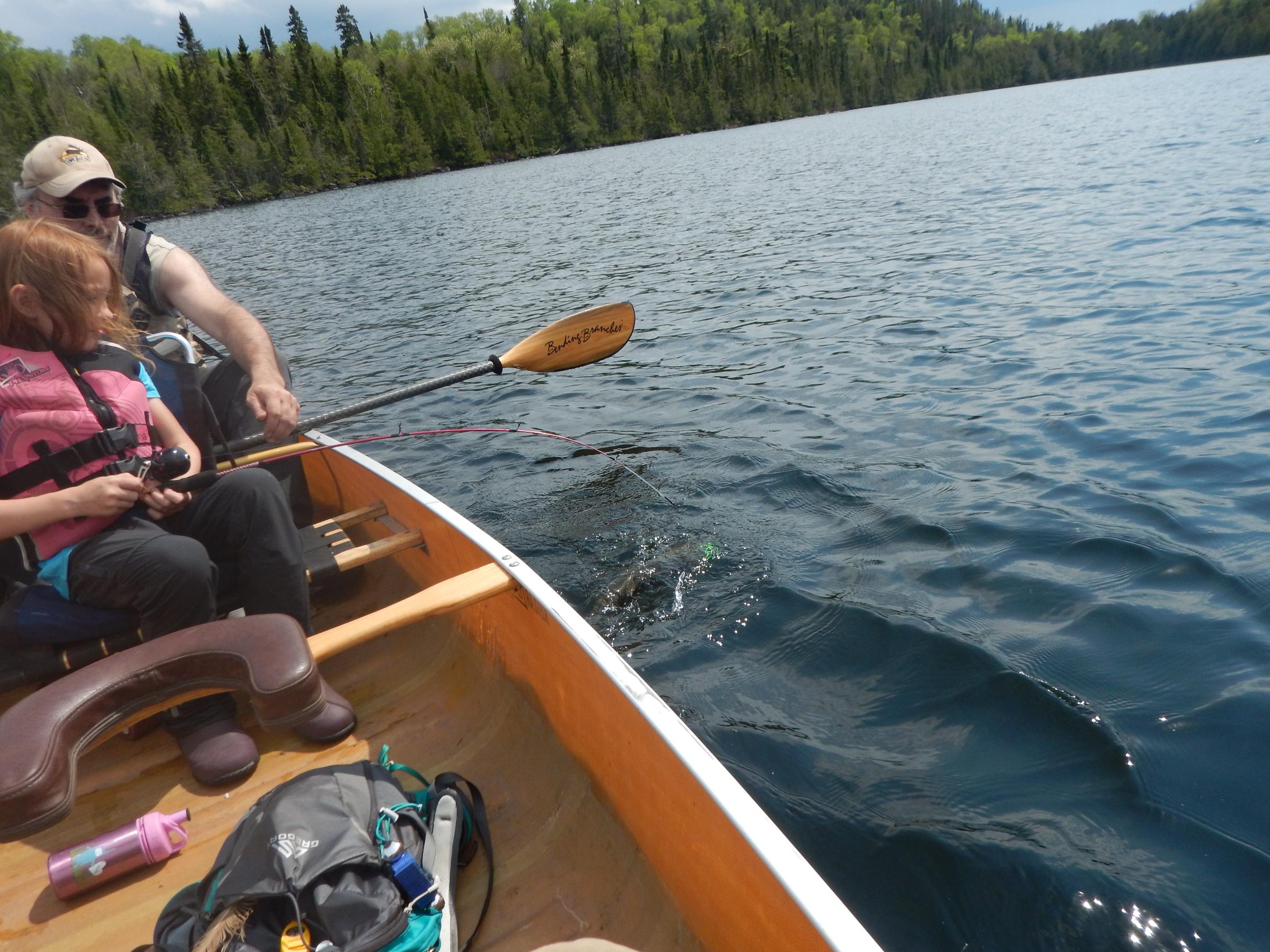 While waiting out the weather, we notice some people at the portage in from Rum. We wave them over and tell them they can have this site if they want, as we are just waiting for the weather to break. We proceed to have a very enjoyable half hour visit with this nice couple from Madison, Wisconsin. The fearsome clouds pass by without releasing much in the way of rain so, we head back out on the lake for a short while after the skies clear - and then, begin the journey back to camp. 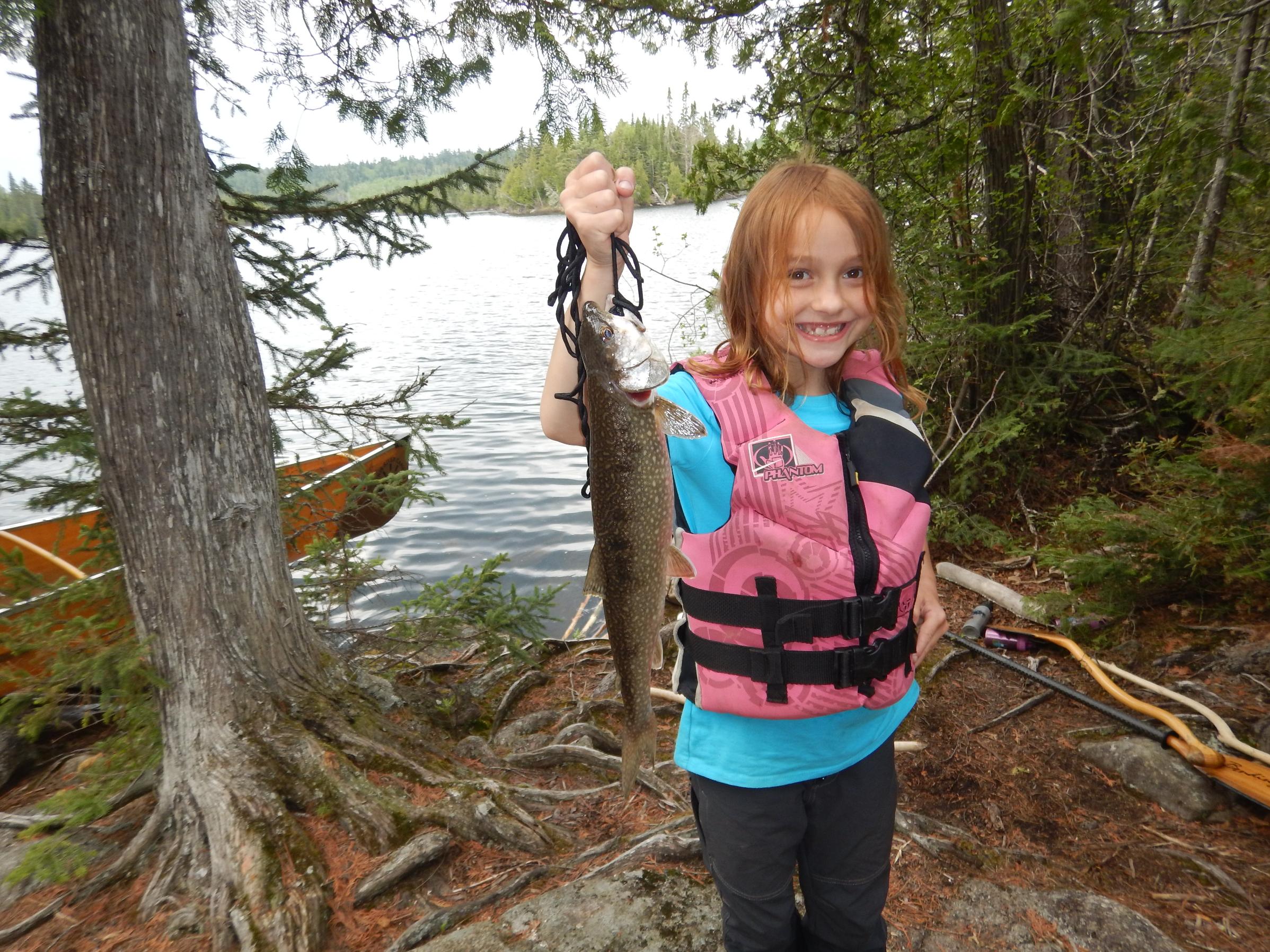 We encounter our first bit of navigational confusion after paddling back across Rum Lake. The portage to Kroft is not where our maps say it should be. A rain shower soaks us while we reconnoiter. While we duck out of the rain, I pull out my GPS and check our location. We're right on top of what is supposed to be the landing! After the brief shower relents, we hop back in the canoe and paddle to the extreme eastern edge of the lake where we find the landing. (My GPS,and all maps I've seen, show this landing in the wrong spot. Since the lake is reasonably small it's not that big of a deal. But, if you're in the area, a good rule of thumb would be to paddle to the absolute extreme eastern edge of the lake to find this landing.)

At least the rain helps to cool things down for awhile. Making it back to camp without further incident we set about preparing Aurora's trout for supper. It deliciously supplements our seasoned pork loin and, the hammock is a life saver for this over stuffed Dad. 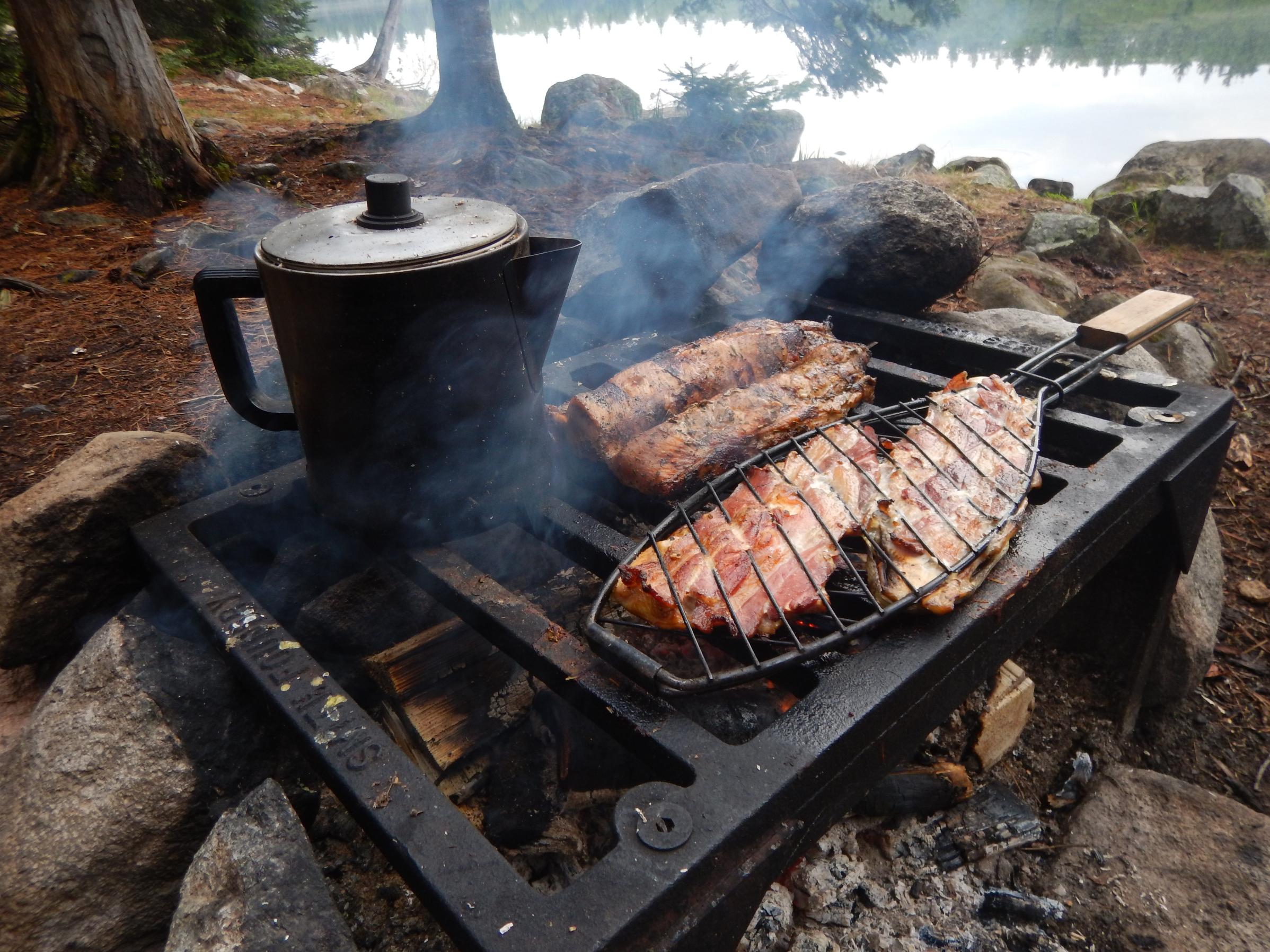 It's another quiet, peaceful evening around the campfire as we enjoy some relief from the heat & humidity. I wonder aloud about the fact that Little Trout Lake was vacant when we had arrived today. Perhaps we should have pushed on yesterday??? 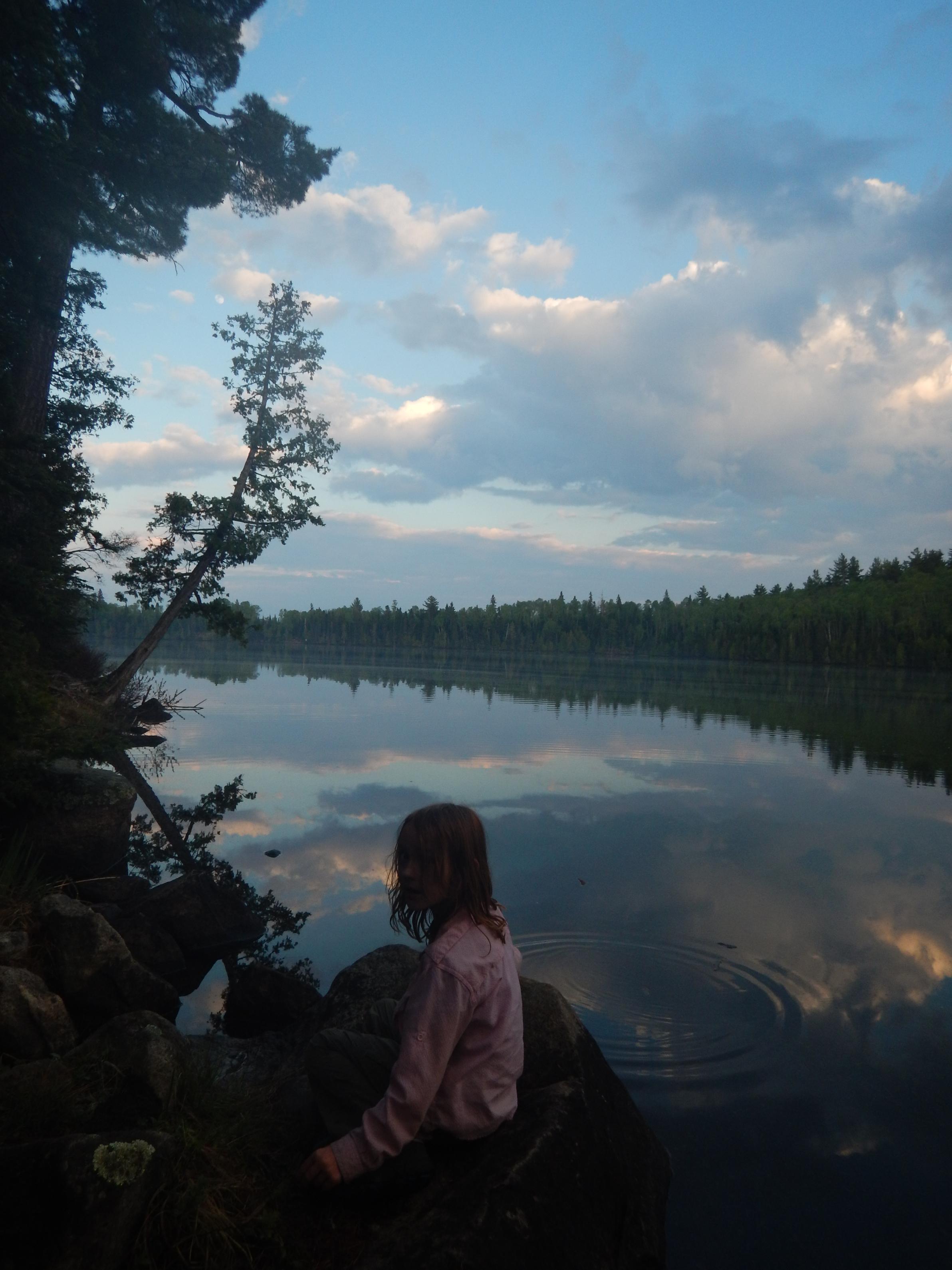