Trip Type: Paddling Canoe
Entry Date: 05/24/2018
Entry & Exit Point: Quetico
Number of Days: 5
Group Size: 2
Trip Introduction:
My friend Dan and I went on a canoeing trip through the Man Chain Loop in Quetico Provincial Park. Neither of us had any real canoe experience, but our thought process was "we'll figure it out as we go." Maybe not the best idea, but it sure makes for some fun times. We met while working in New Mexico, but I (John) now live in north central Wisconsin and Dan lives in the DC area. He flew up and we made the seven-and-a-half hour drive to the end of the Gunflint Trail at Voyageur Canoe Outfitters. In late May 2017 we took a trip to Isle Royale and hiked the extremely rugged Minong Ridge Trail, so this year we wanted to return to the area since we both loved it so much. Dan used a Hennessey Hammock system while I used a small and light Tarptent. Neither of us had any difficulty in either finding suitable trees or flat spots to set up in.
Discuss Trip: View Discussion Thread (2 messages)
Day 1 of 5
Thursday, May 24, 2018

We arrived at Voyageur Canoe Outfitters, our chosen outfitter, the previous night. 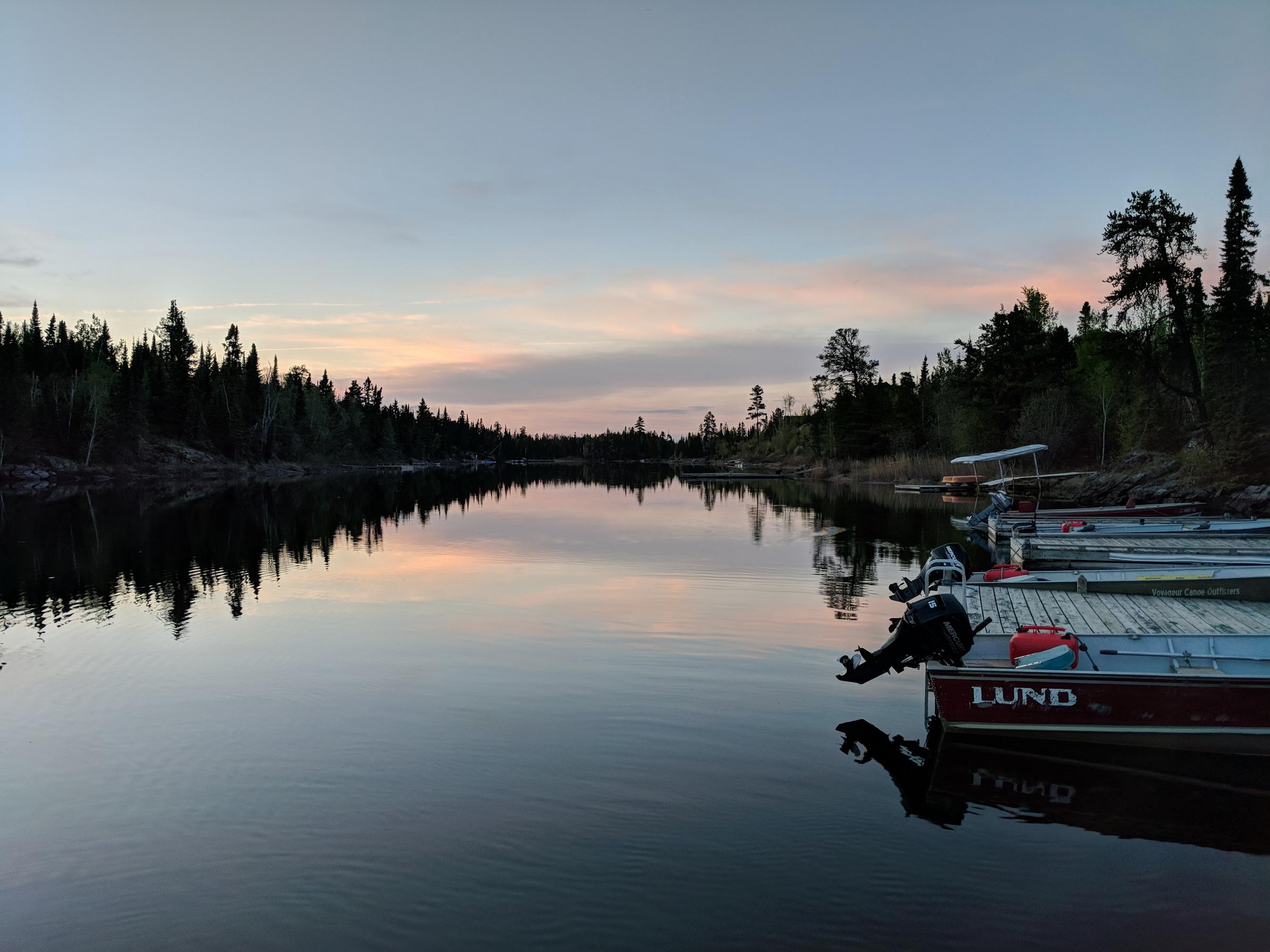 We were up at 6 or so and after a breakfast of pancakes, sausage, and orange juice, we walked to the dock where our boat waited to take us to Hook Island.

We were on our way to Hook Island by 7:30. The ride up the Seagull River towards Saganaga Lake was beautiful. Fish were spawning everywhere in the shallow river and the cool of the morning was perfect. It was definitely a good call to pay for the tow boat to and from Hook Island. The ride easily saved us 6 hours or more of paddling through open water.

We landed at Hook Island sometime between 8 and 8:30. As we loaded the canoe and our gear onto the beach the pilot asked if either of us had ever portaged a canoe before. We responded "no," and so we were given a quick tutorial on how to do it properly. I was the first to lift the canoe onto my shoulders and it didn't seem too difficult. I recall thinking that portaging shouldn't be too much more difficult than it was to haul a heavy pack over the ridiculously rugged Minong Ridge on Isle Royale one year previous. In hindsight, maybe I was a little off-the-mark with that assessment.

Our ride backed away from the beach on Hook Island and within a few seconds Dan and I were left all alone. We had an ambitious destination planned for the day - an island campsite on Other Man Lake - so we quickly packed up our gear, loaded the canoe (Dan in the rear and myself riding up front) and headed southwest towards Cache Bay.

It didn't take us too long to get into a decent rhythm, and within 45 minutes we were tied up at the dock at the Cache Bay Ranger Station. It was here we met Hannah, the very memorable Quetico Park ranger. She processed our permits between bouts of swearing at the computer because she couldn't log in. After purchasing our Canadian fishing permits we walked back to our canoe to head north towards Silver Falls, and our first portage.

Within an hour of leaving the station we arrived at Silver Falls. After a quick rest my friend took the initiative; he shouldered his pack and brought the canoe up and onto his shoulders and we set off. 15 or 20 minutes later, him soaked in sweat, we arrived at the end of the portage. Photography was an important facet of the trip for me, so I asked if Dan would be alright if I headed back up the trail while he took the canoe out fishing for a little while.

I walked back up the trail, had a great time snapping some shots, and made my way back about 30 minutes later. I came around the corner to my friend paddling back to shore soaking wet. He had capsized the canoe not once, but twice.

This was a prime example of what inexperience can do; I had taken all of my gear out of the canoe, which left just my friend and his heavy pack in the rear of the canoe. The front end, we observed later, was sticking out 6 or more inches from the water.

He had gone to grab something from his pack, which shifted unexpectedly, causing the canoe to tip over. Thankfully his pack floated and he was wearing his life jacket, so the only loss was a fishing pole and my two hiking poles (which were used to support my tent). Dan was able to right the canoe, toss the gear floating on the water back in, and swim the 20 or so yards to the nearest shoreline. There he got back in, found a piece of driftwood, and paddled back out to grab the remaining gear - including his oar which had floated away. At this point he somehow flipped the canoe again. I came around the bend at the end of the portage to see him paddling up to the landing, shivering and soaking wet.

After Dan collected himself and warmed up we set off again, keeping in mind how much more water lay between us and our goal. We were able to make good time through Slate and Fran Lakes, and by early evening we were paddling across a mirror-like Bell Lake. The final hurdle on our first day was the short portage leading into Other Man. It was completely covered in thick, mid-shin deep mud. It ended being the only portage in which we didn't carry everything in one trip; we both carried the canoe through the mud, doing our best to balance on vegetation, rocks, and logs to avoid getting too muddy (it didn't work out very well).

After a long first day we finally pulled up to our campsite at about 8 in the evening. The island site was perfect - no bugs, perfect temperature, and sitting down to eat a hot dinner was the ideal way to end the day. 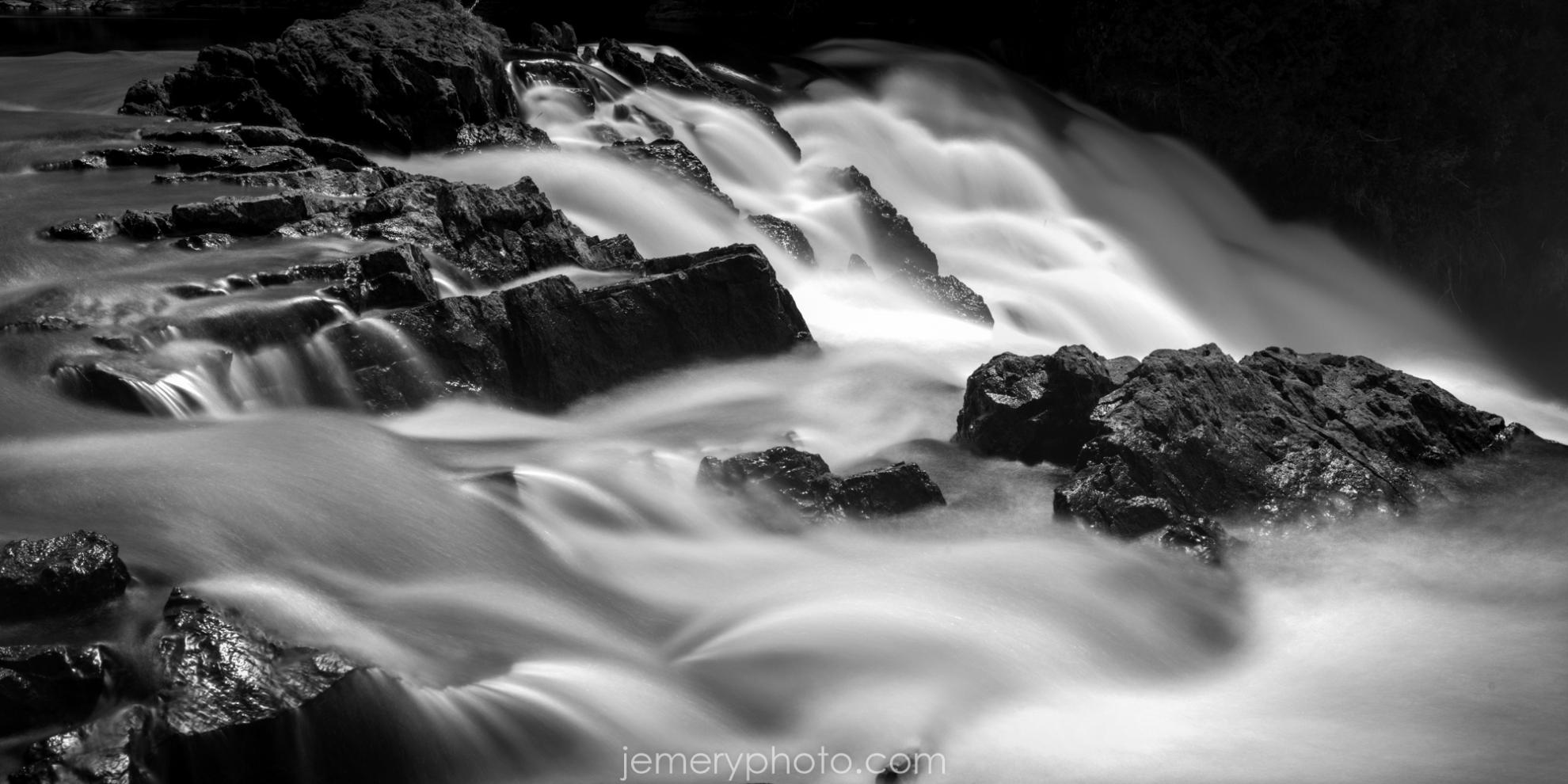