Trip Type: Paddling Canoe
Entry Date: 06/09/2006
Entry Point: Quetico
Exit Point: Quetico
Number of Days: 9
Group Size: 6
Trip Introduction:
The planning for our trip actually started soon after our June 2005 BWCA trip. We all decided we want to try something new, to go somewhere none of us had been before - Quetico! We had several "conferences" beginning with a kick-off meeting in January. At that initial meeting, we didn't know who exactly would be going on this trip. We had our core group of four, with the possibility to two more paddlers. The pieces fell into place. The anticipation grew. The calendar pages turned until it finally arrived - June 8th.
Day 1 of 9
Thursday/Friday, June 8 & 9, 2006. Mostly sunny with temps in the mid 60s.

The boys arrived at my north metro home around 11:30pm – fashionably late. Present were Mr. Barley and his brother Moose Plums - we three go back over 30 years. Then there was my brother Mike and his good friend Matt. Matt’s 16 year-old son Zach rounded out our group of six. After an exchange of handshakes and greetings came all the lame excuses for their late arrival. My gear was quickly loaded into whatever nook and cranny was still available and after securing my Old Town to the roof of Moose Plum's Blazer, we were off. We made one stop at a convenience store to load up on some Rock Star and Mountain Dew, then continued on our way to Crane Lake.

We pulled into the Gateway Resort a little before our 6 am departure time. We got out of our vehicles, stretched our legs and loitered around expecting our shuttle boat pilot to appear at any moment. When we hadn’t seen any signs of life by 6:15, Barley went and knocked on the door of what we thought most looked like the office. Our pilot, Randy, drove truck in addition to running his resort and outfitter service. He was just catching a few extra ZZZs. Randy can best be described as a chain smoking north woods blue collar type – hard working, hard living and resourceful. Upon inspecting our excessive collection of gear, Randy asked “Do you think you have enough fricken crap?!” Not his exact words. We smiled at each other knowing that this was not going to be just another boat ride. 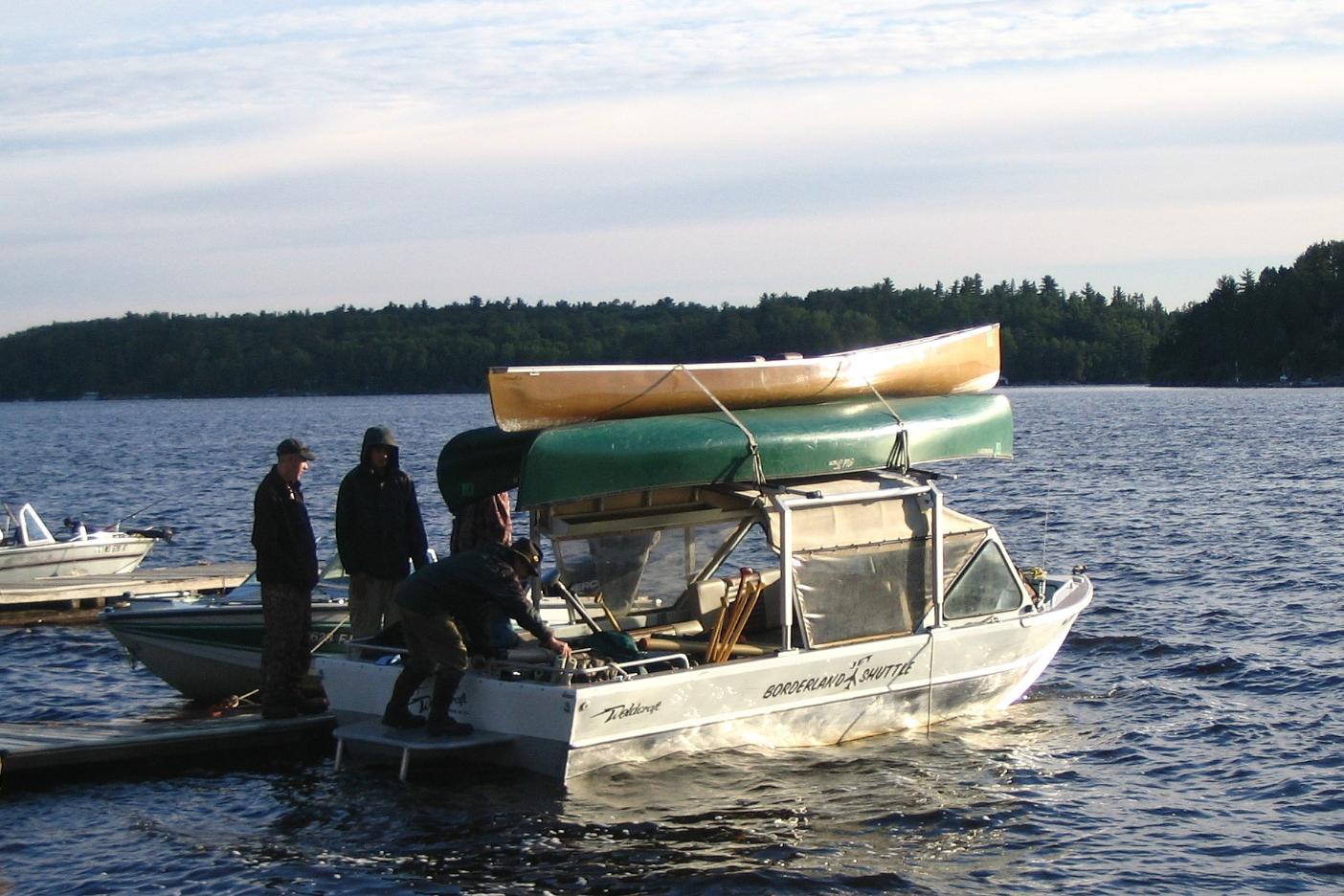 As we loaded our gear onto the jet boat, Randy instructed us to put the heavier packs up front for balance. Our three canoes went up top on a rack and were stacked pyramid style. Randy strapped the canoes down, then jumped into the pilot’s seat. After several attempts to start it, the motor roared to life and we were off.

We crossed Crane Lake eventually arriving at Canadian Customs on Sandy Point Lake. We were asked the usual customs questions by a couple of cheerful and very friendly female customs agents. Randy explained to us that they hadn’t seen a man in a few months. 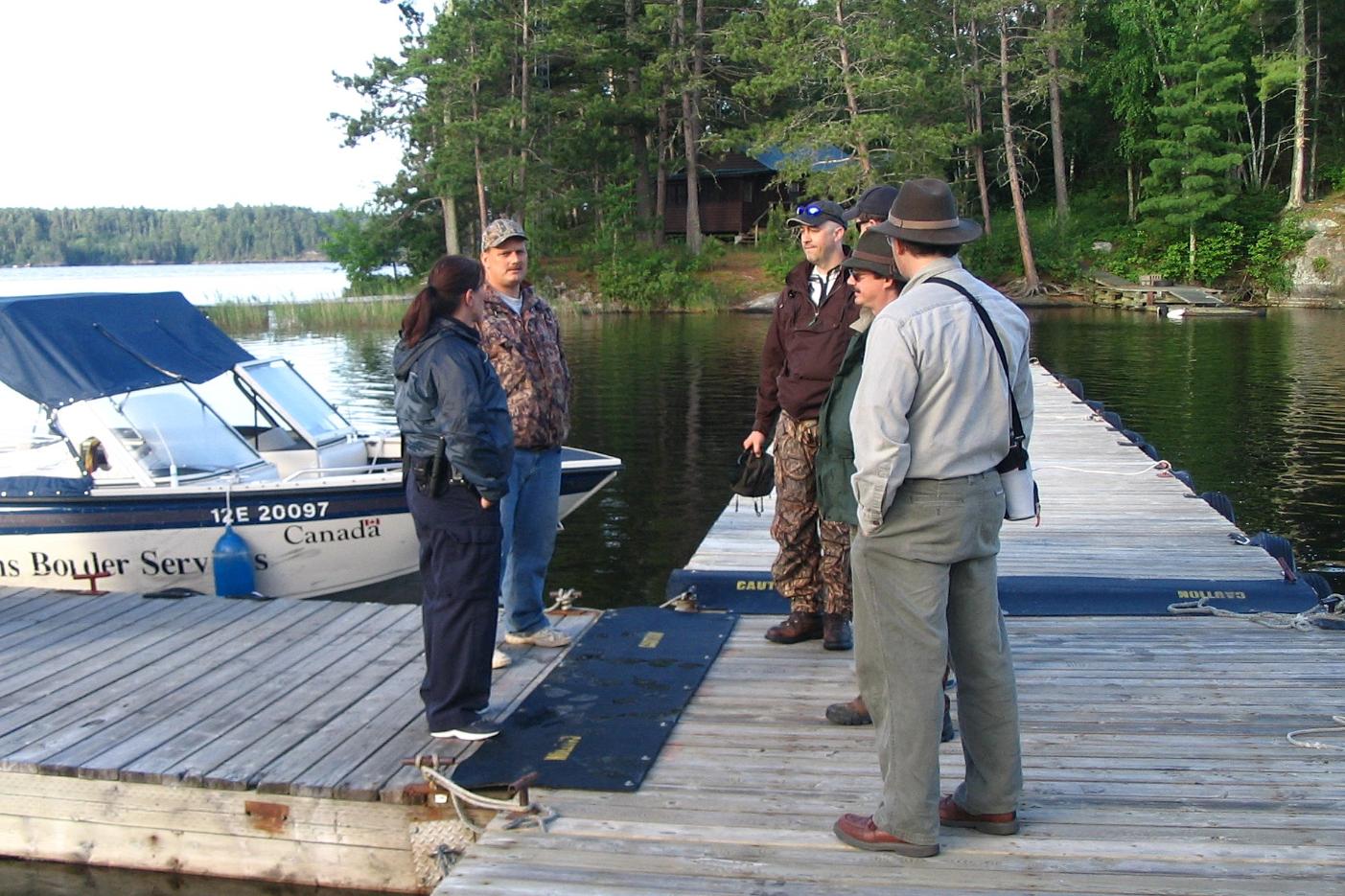 We continued north across Sandy Point Lake and then up the Namakan River to a boat landing near Lady Rapids. We unloaded our canoes and gear from the boat and piled it up on either side of the landing. Here we would be met by Gus. Gus would have our leeches and would be transporting us on the land portion of our shuttle in. As Randy pulled away from shore, he warned us that Gus was sort of an ornery fellow and we really didn’t want to piss him off. After waiting for almost an hour, we first heard and then saw a pickup truck bouncing down the road to the boat landing. It was Gus! Gus, it turned out, was Randy’s father and a very nice guy. Maybe we just caught him on a good day. Somehow we managed to get all our gear, our canoes and our selves loaded into the pickup and began the long drive to the Beaverhouse Lake portage. 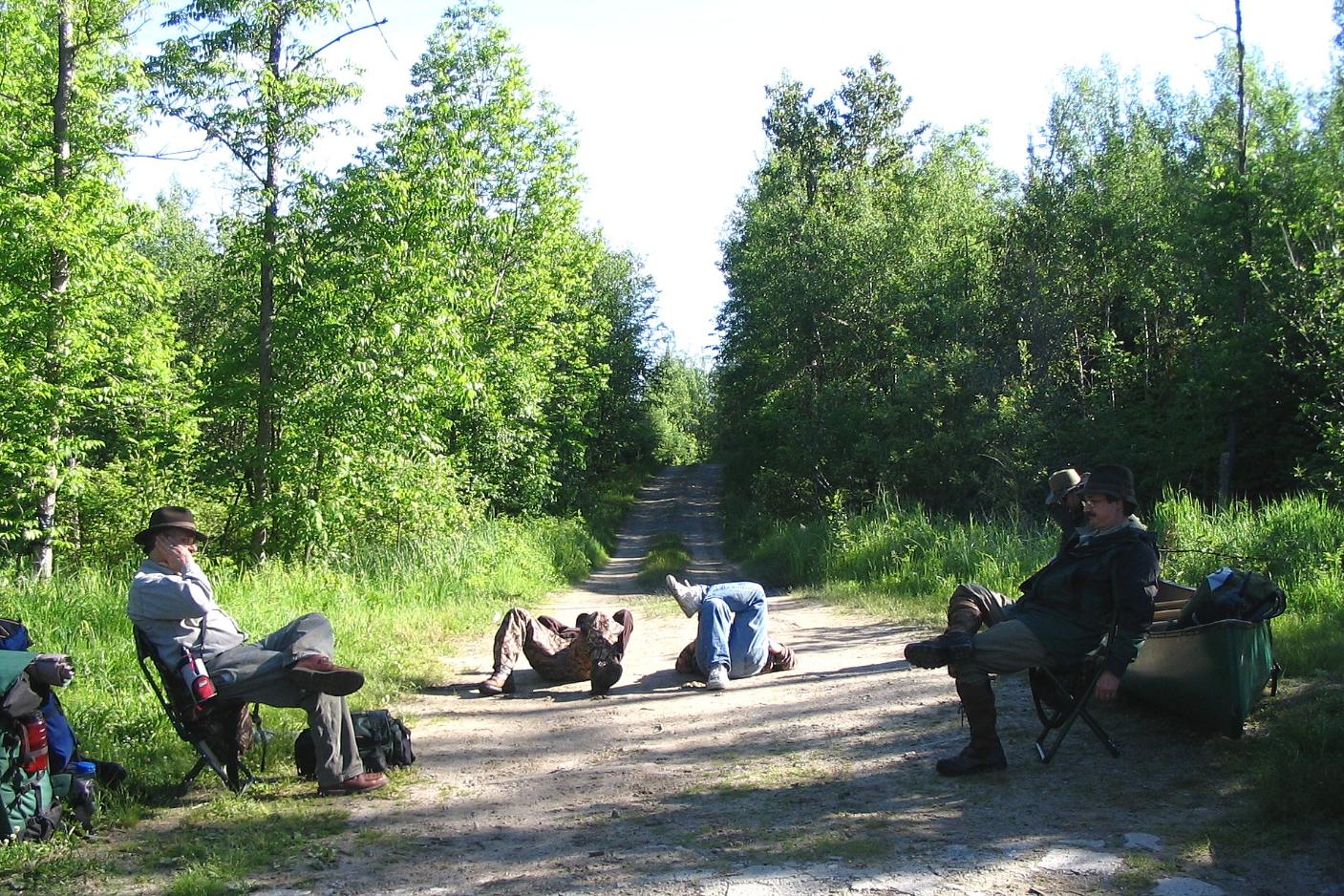 It was a 45 minute paddle across Beaverhouse Lake to the ranger station. It was easy to find since there is a fire tower standing on the hill behind it. We quickly obtained our permits and fishing licenses. We snapped a group photo and then had lunch on the dock in front of the ranger station. Now rested and nourished, we shoved off from the large sandy beach and headed east towards the 24 rod portage into Quetico Lake. 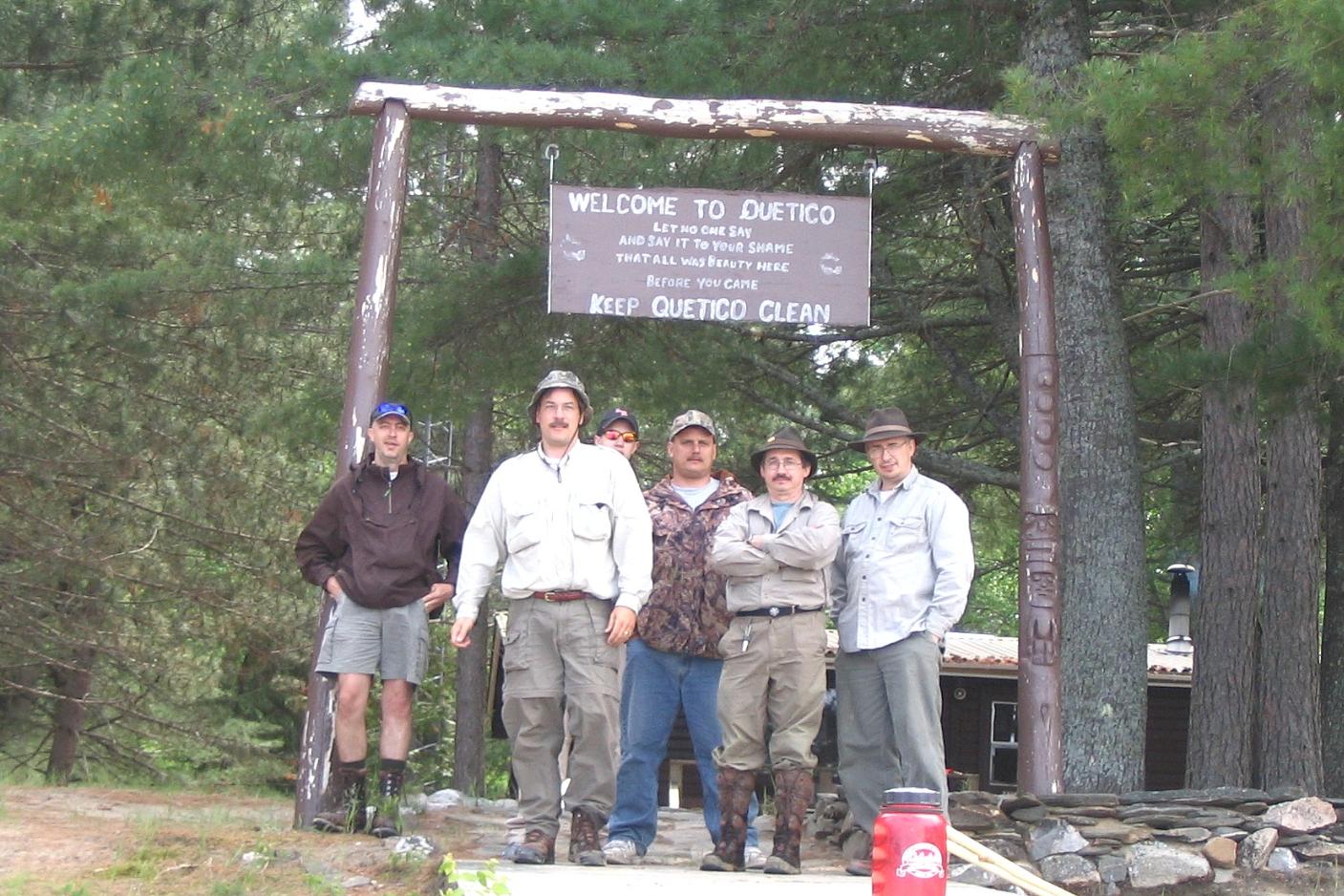 As we reached the other end of the portage we were greeted by two friendly park rangers. They immediately asked to see our fishing licenses. After the inspection and some pleasantries, they continued on their way to Beaverhouse. We headed the other direction through the narrow channel that leads out to the big lake - Quetico.
It was a long push across Quetico Lake with a 7-10 mph wind in our faces. By 5:30pm we were beat and decided we needed find a campsite. The lack of sleep finally caught up to us. We found a suitable campsite on a peninsula on the north side of the lake. Once camp was setup, we had our traditional first night steak dinner complete with fresh steamed green beans. After dinner, we cleaned up, hung the food pack and retired for the evening – exhausted.