Quetico solo ... sort of.
by Solobob1

Trip Type: Paddling Canoe
Entry Date: 06/07/2018
Entry & Exit Point: Quetico
Number of Days: 12
Group Size: 1
Trip Introduction:
Working a very stressful job, I have longed for the respite of my back country trip with my best buddy Jake since the Canoecopia show back in March this year were I met Michelle of Voyageur Wilderness Programme (http://vwp.com/). They are located on a 5 acre island on Nym Lake and are the perfect location to settle in and enjoy a great meal and lodging before traveling on to the entrance of the Quetico at the Batchewaung portage. It was here that Jake and I explored the back country, caught many walleye and reconnected to the wilderness in a most satisfying way. This was an amazing trip, albeit a very different one for us.
Discuss Trip: View Discussion Thread (13 messages)
Report
After an 11 hour drive and a short easy stop to clear customs, Jake and I found ourselves at the Nym Lake put-in. It was a very short port to the lake and a nice floating dock. We loaded up the Prospector and after about a half mile paddle found ourselves on the island belonging to Voyageur Wilderness Programme (VWP). Michelle and Michael were waiting to help us unload our gear and direct us to our cabin for the evening. The accommodations were truly excellent - as was the meal! They proclaim to be a dog friendly facility. Well, they are really dog lovers, and not just friendly, they are just plain inviting and I was honestly treated like family during my stay. So after a nice visit, and a terrific supper of home made chicken, Jake and I retired to our cabin. At 5 am, we were greeted to coffee, eggs, potatoes and bread - all homemade before our departure on Nym to the Batchewaung Portage. Both Nym and Batch are big lakes and it is best to travel early before the winds stir the large open waters up.

Jake and I finding our first portage of the day. 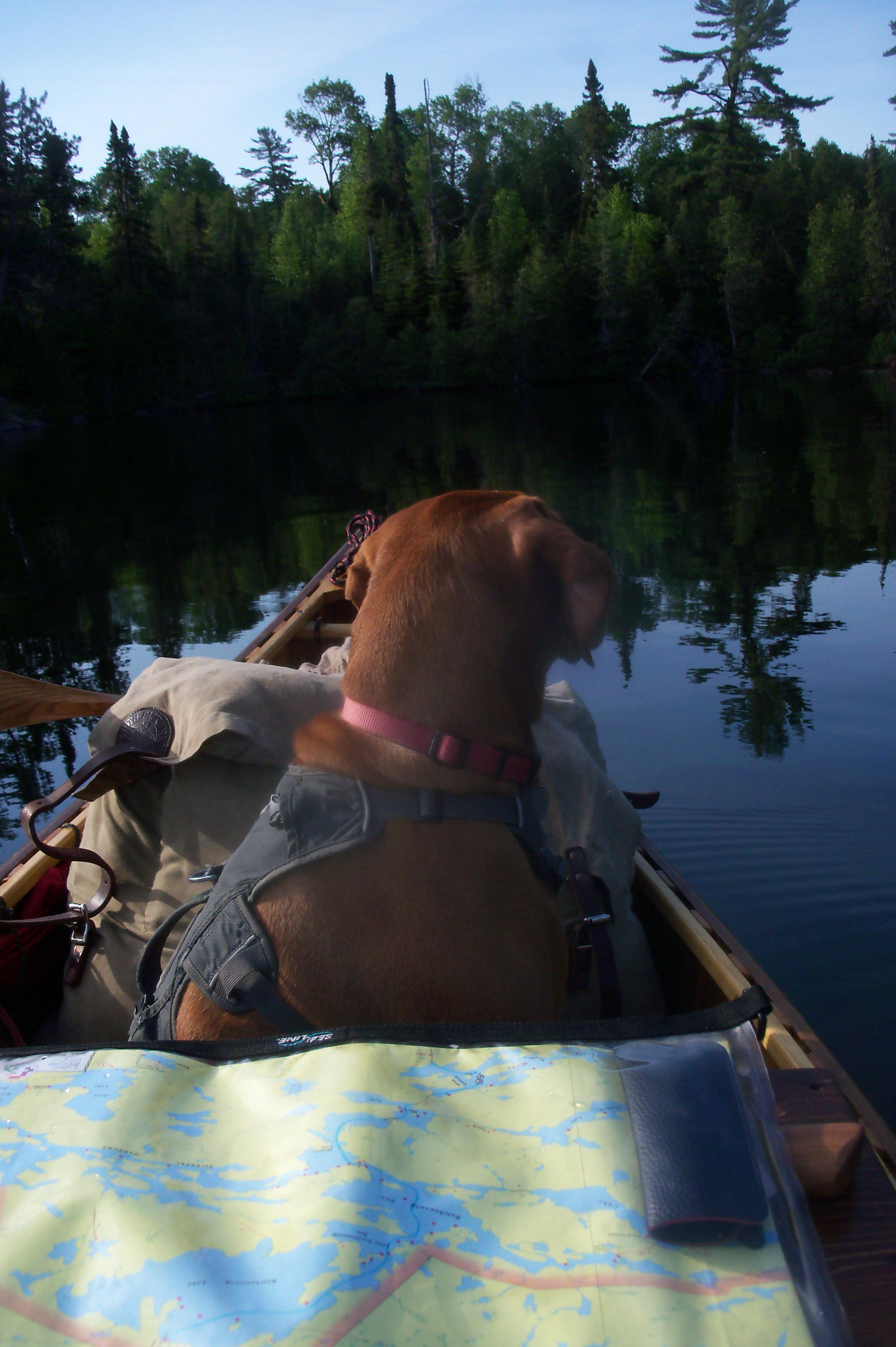 We completed the port, crossed Batch, Little Batch bay, and Batch bay, through a narrows we now call Wet Eagle Portage as we spied an Eagle who was too wet to fly, paddled past Mosquito point and found the portage to Maria lake. This is a short port, but has a bolder garden on each end - not too fun especially solo. By now it was early afternoon and we were battling some fierce winds. We stopped on Maria Lake for the night, thinking of heading to Jessie in the morning. Well, the winds finally died down around 5 am the next day, but the as they left, the rains began ... an all day soaker. Jake and I moved camps but stayed put on the lake. We would then be wind bound the following day as the fickle spring weather could not figure out what it wanted to do.

Hearty meal and coffee as the rain stopped finally on Maria Lake. 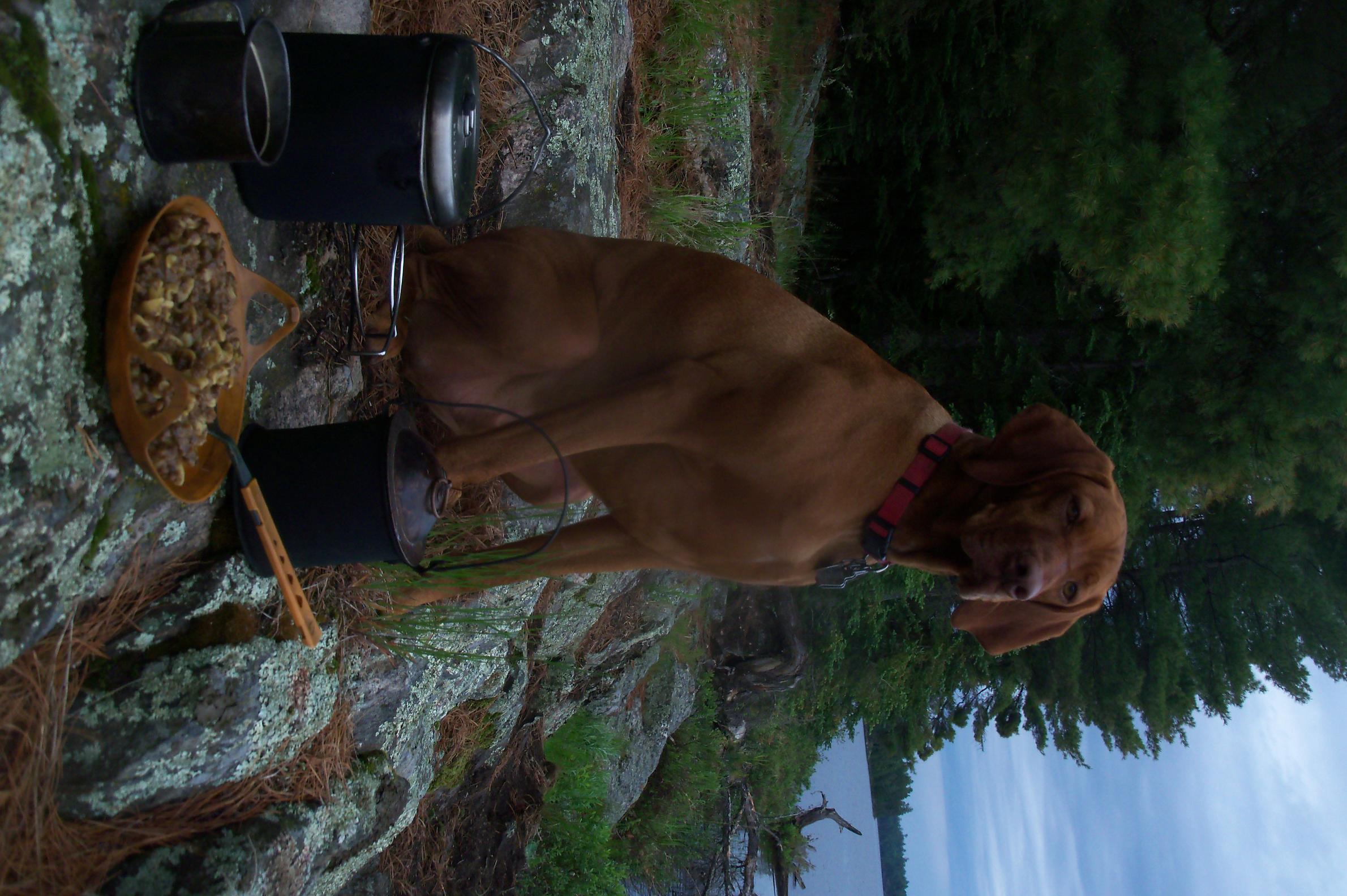 Tried to take a selfie, but heard a noise 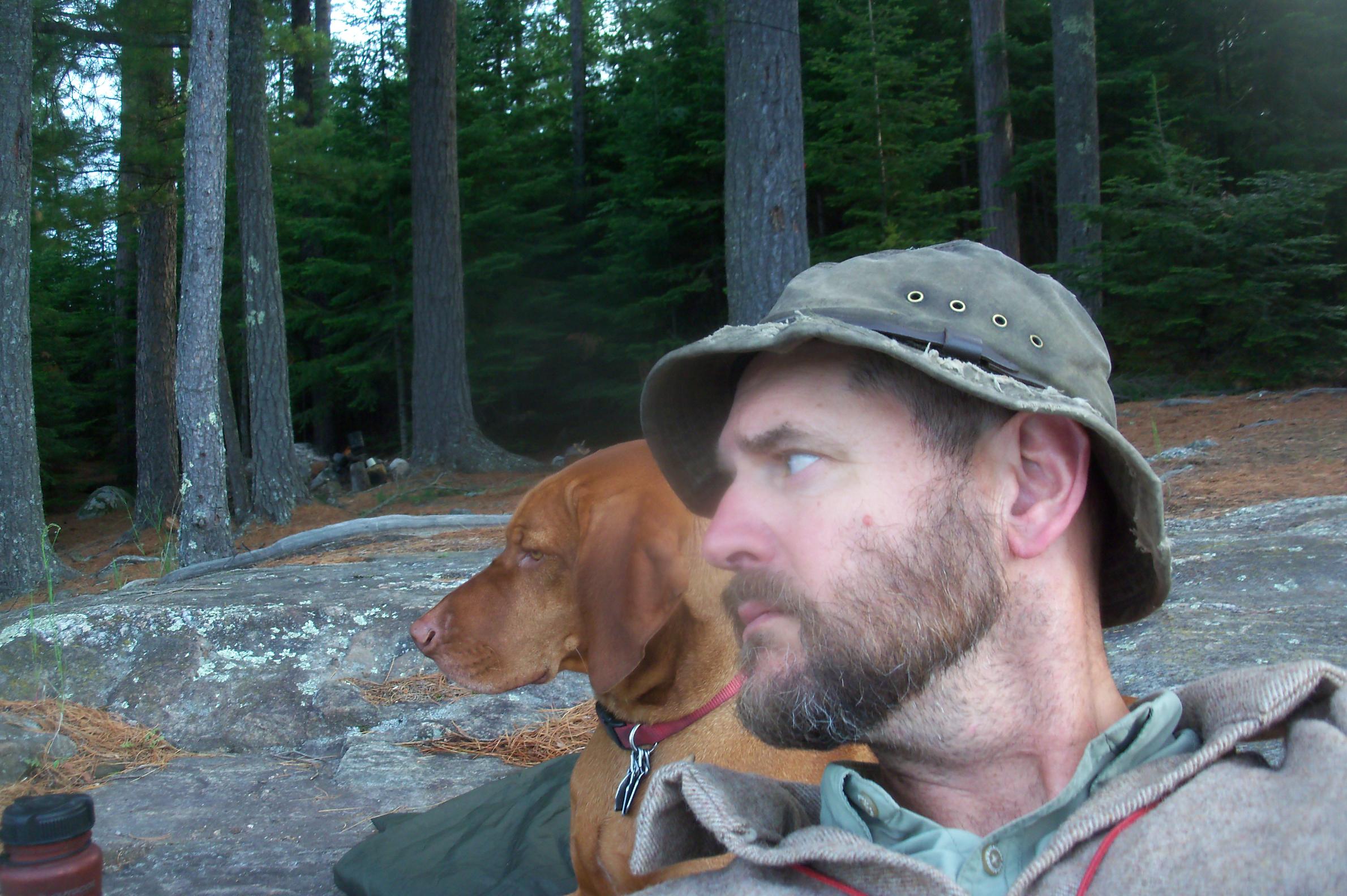 Eventually, Jake and I found some time to paddle and explore, one of our favorite things to do. 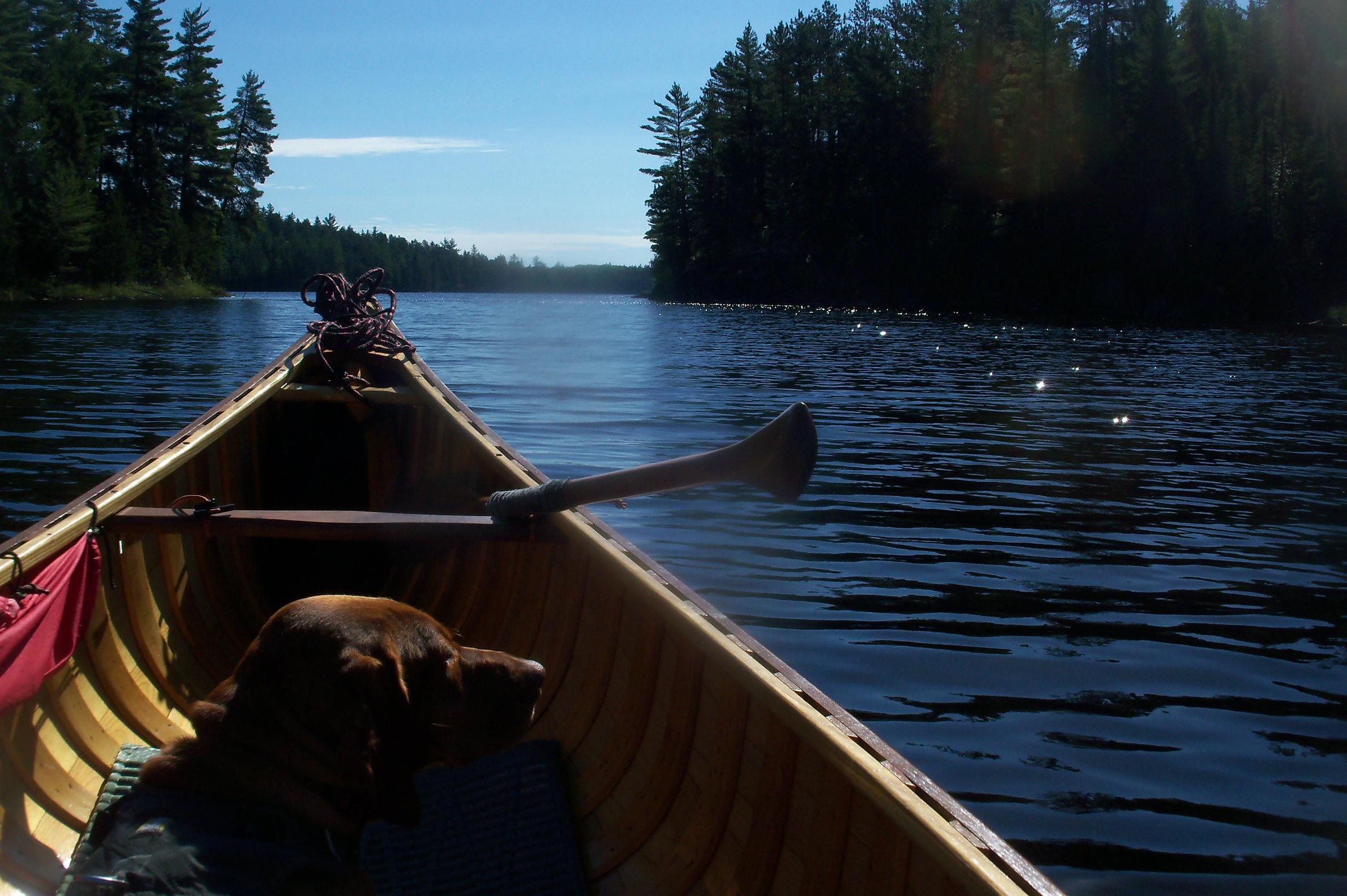 When we did complete the portage to Jessie lake, we meet 4 young ladies who work for the Ontario parks service and were conducting song bird surveys. After a quick hello, Jake and I continued on to the end of the Port only to realize, they picked up 2 packs and carried them over for us! How nice is that!! 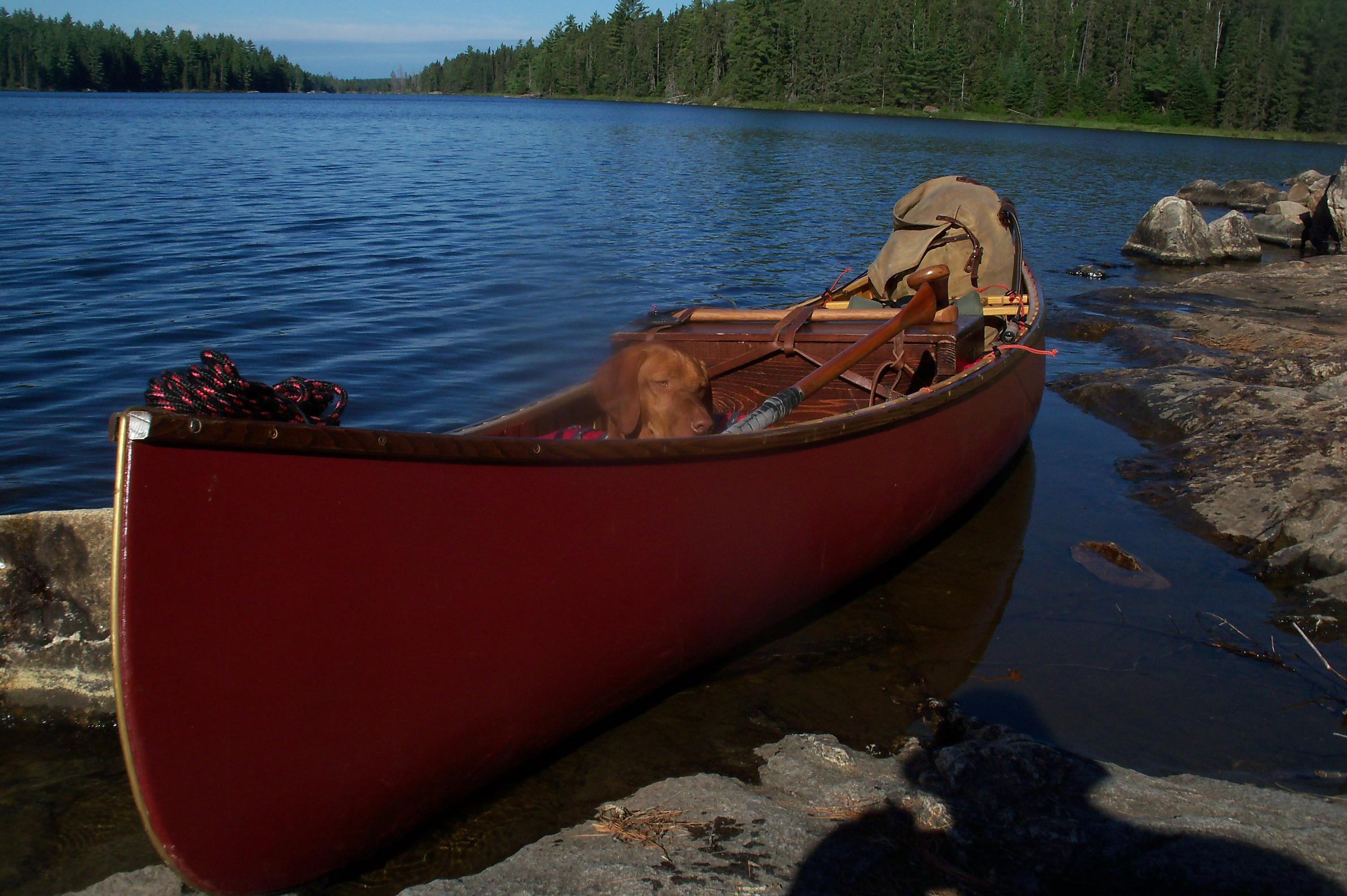 There was a lot of wind damage on many of the portages and frankly, the lake is so beautiful and the walleye fishing so good Jake and I never left, we stayed for 5 days on this gorgeous body of water. I forgot to mention, the day before Jake and I scouted the port to see how much cutting I needed to do to get in there. along the way I dropped a clip knife that I use with my ferro rod to start my twig stove. After we arrived on the lake I approached a party camped on a island site and asked of they found a knife. A young boy found it and ran to his tent to return it to me. Long story short, his family and I visited often over the next few days and we enjoyed several nice discussions.

I also met a group one day on Jessie, 4 Canadians and 2 from the states. I was fishing one cold morning with Jake when they called me over to their camp. I was invited for breakfast and coffee! They wanted to see Jake and were very interested in my canoe. As I left, they took some photos of Jake and I in the canoe, and then later in the afternoon, we exchanged emails before they left ... they sent me these pics. 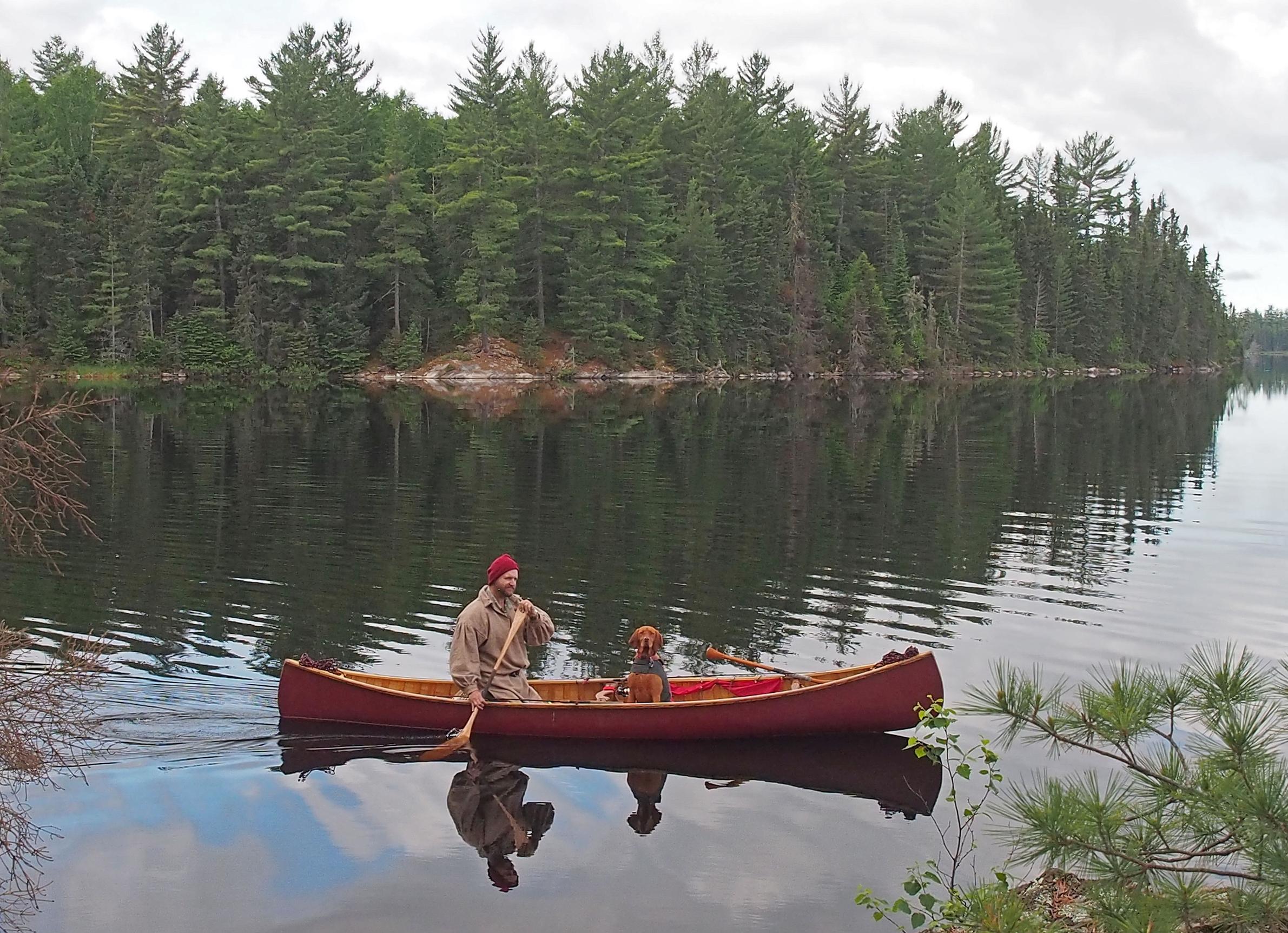 Jake is laying down in this one 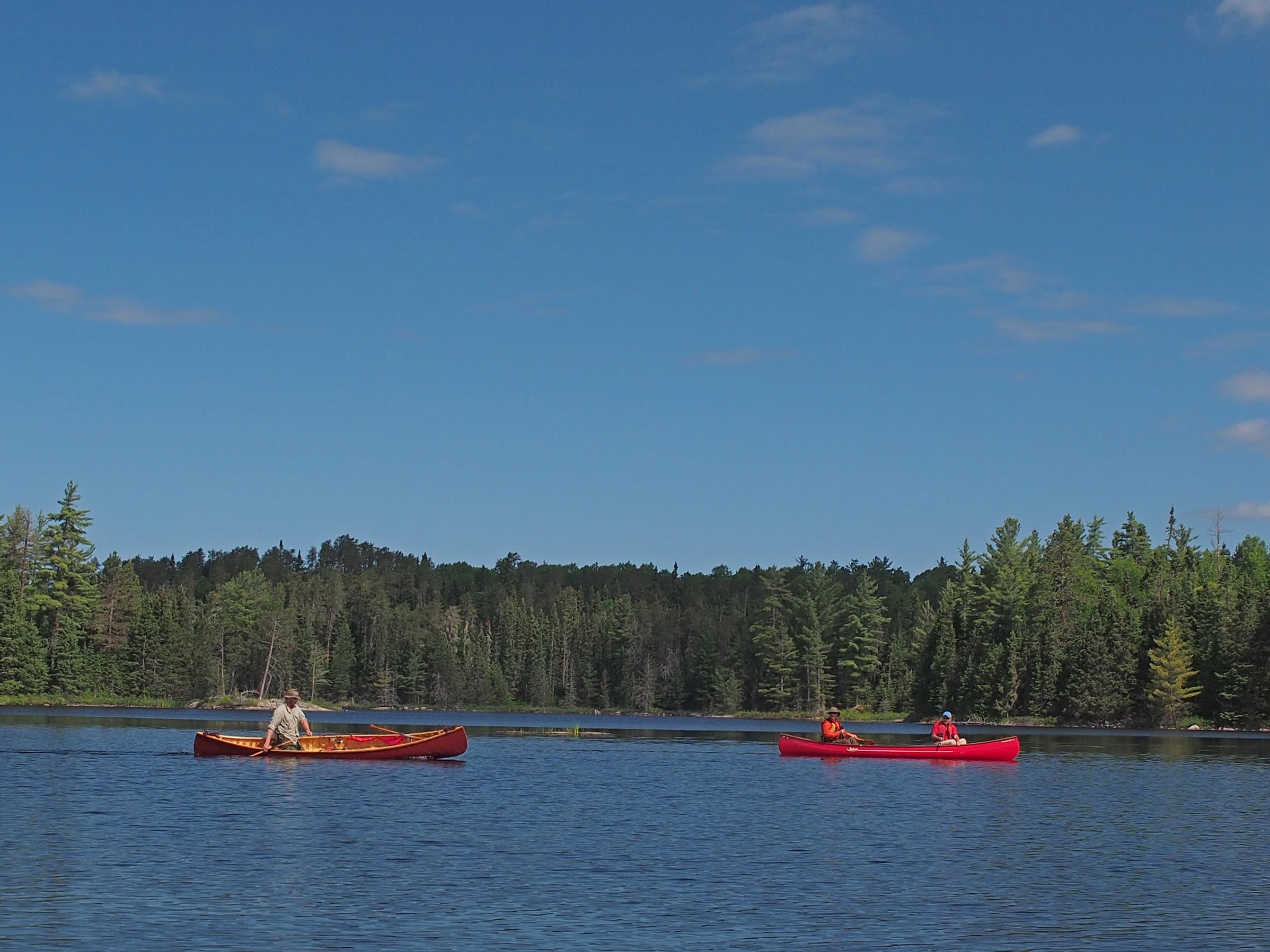 Latter in the trip I met another couple who were fishing, traveling together. We talked about fishing spots and techniques. Eventually we talked about how nice it is to have a little sipping whiskey at the end of the day. Well it turns out they are dog lovers too - and I was invited to do a little sipping with them at their camp around dusk that evening! (best trip ever!!!) It turns out they live less than an hour away form me as well.

Eventually Jake and I once again had the lake all to ourselves. Our days consisted of fishing, shore lunches, exploring the rocks and timber, and having coffee while doing nothing more than just looking and letting it all soak in, the sights, sounds and smells of the magnificent back country. 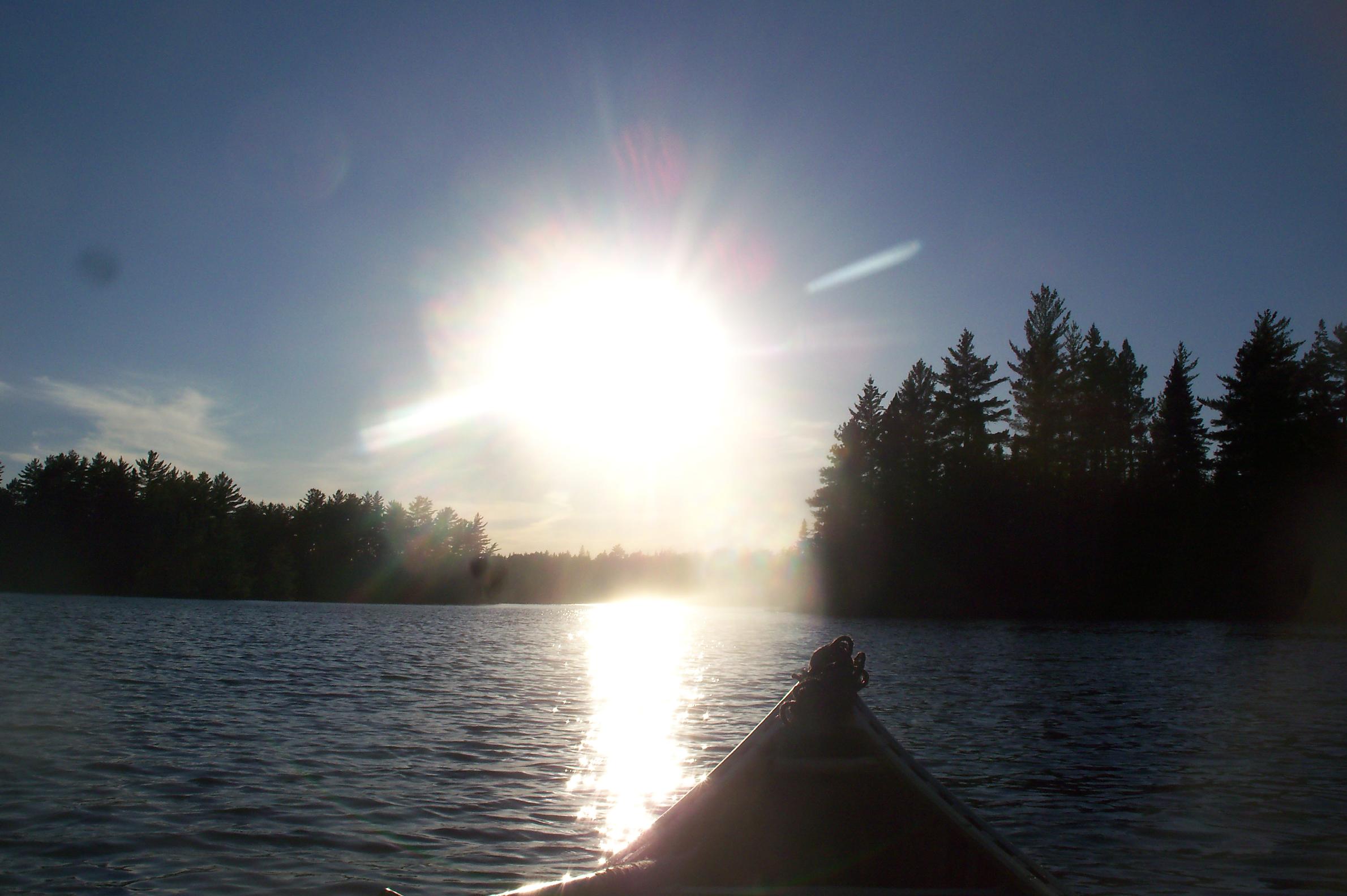 Jake is really settling in to back country life 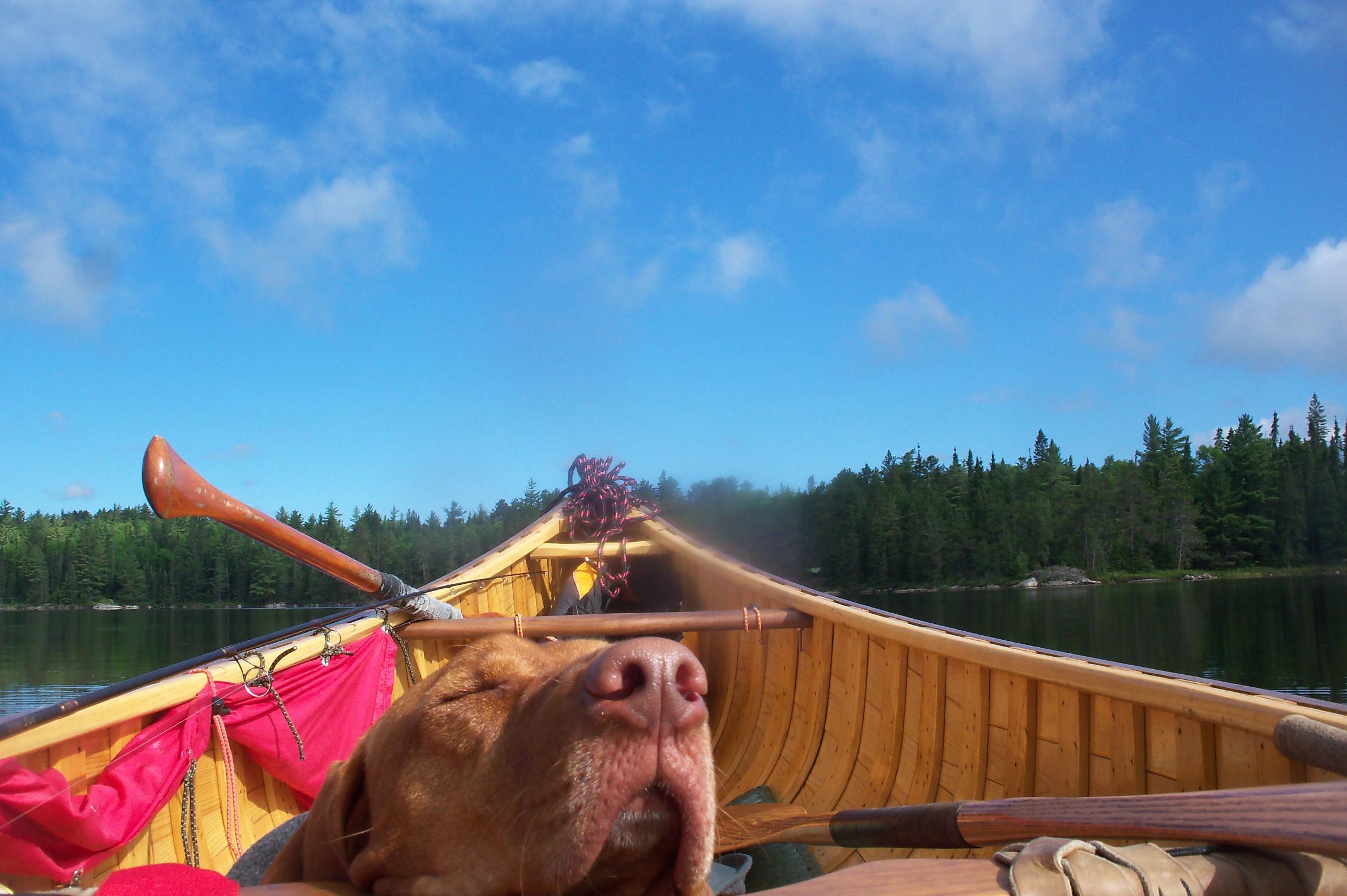 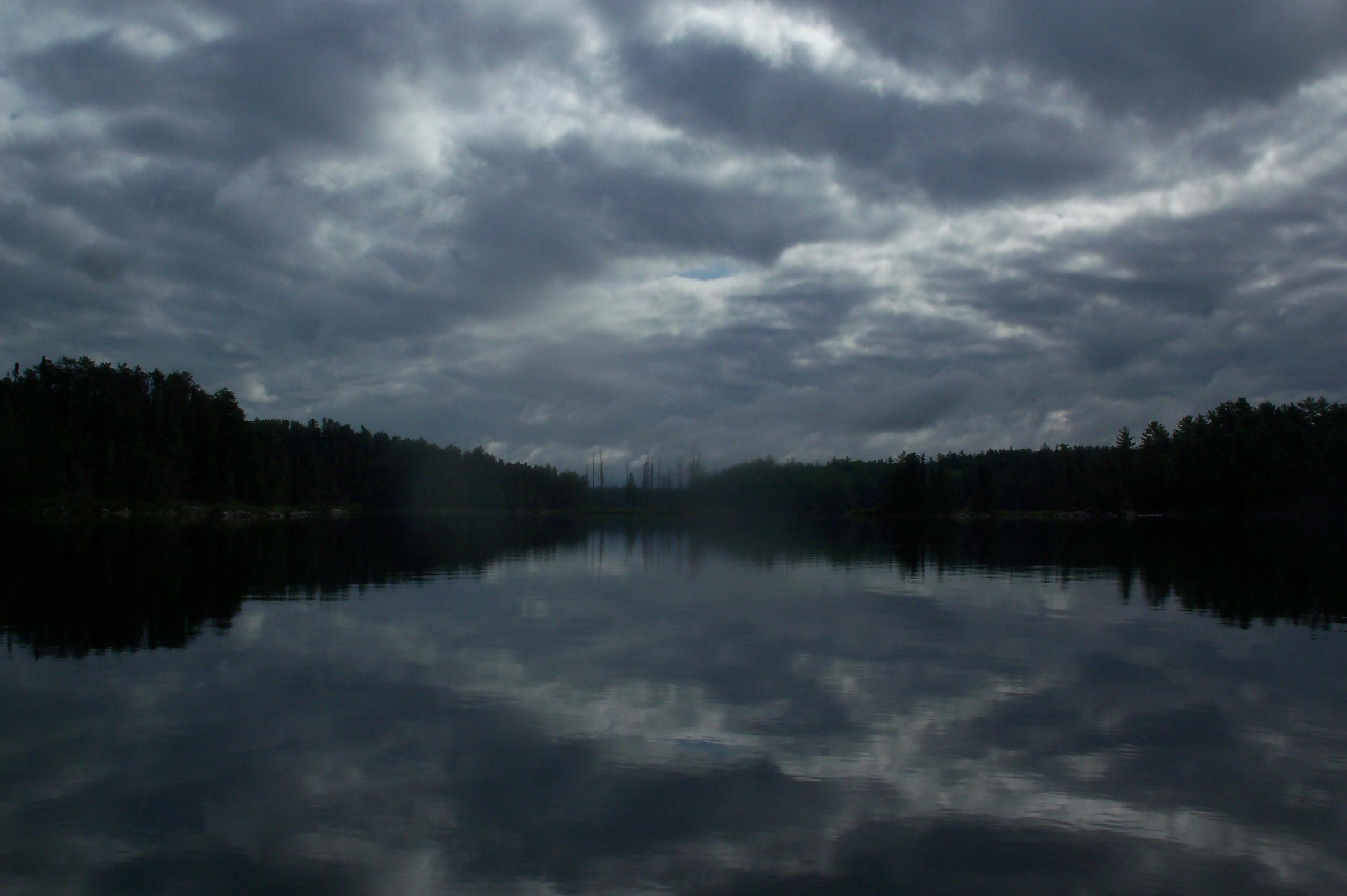 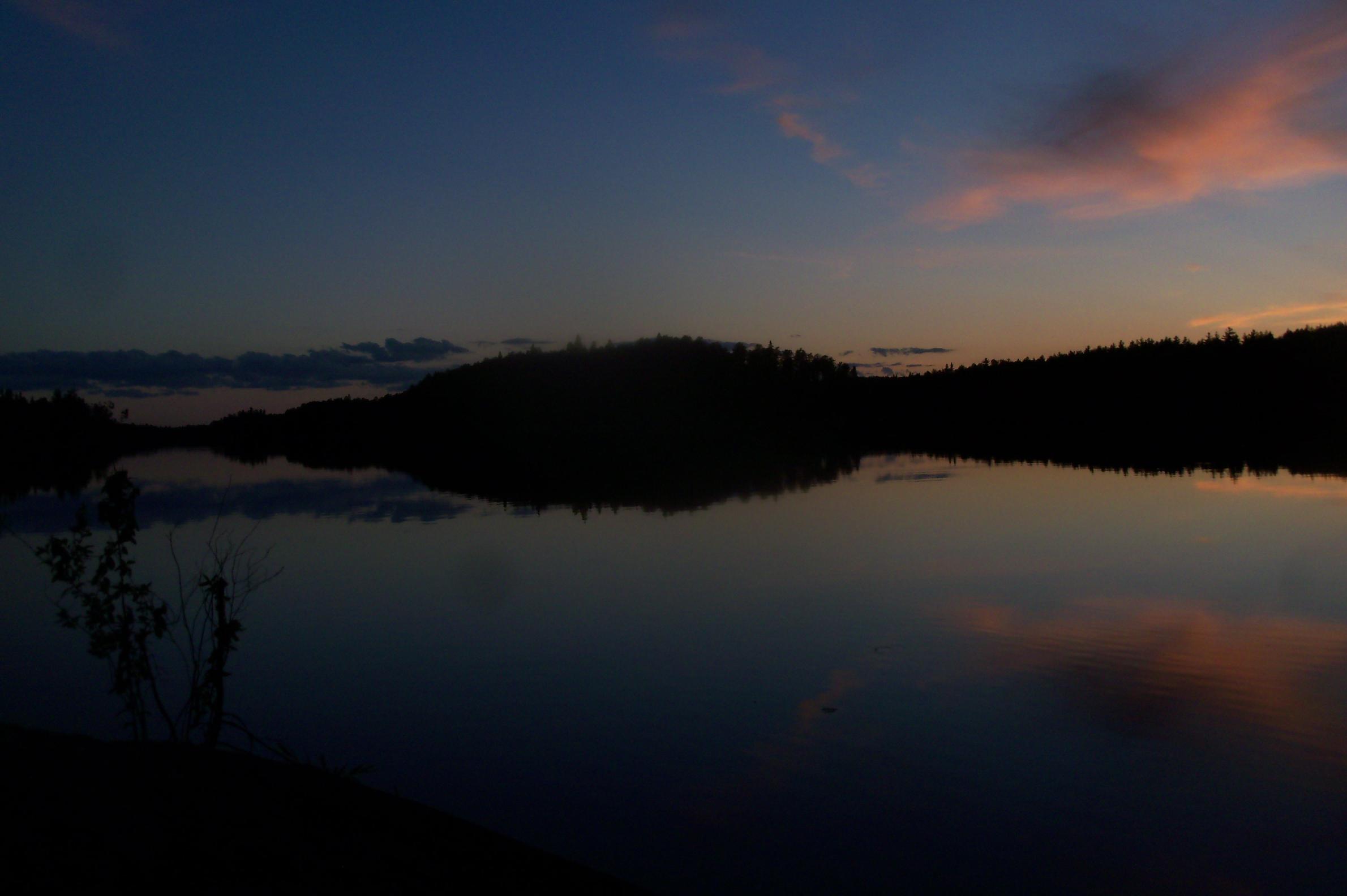 There were some storms and I was wind bound for 1 more day-the wind was much worse than than it looks in the picture. 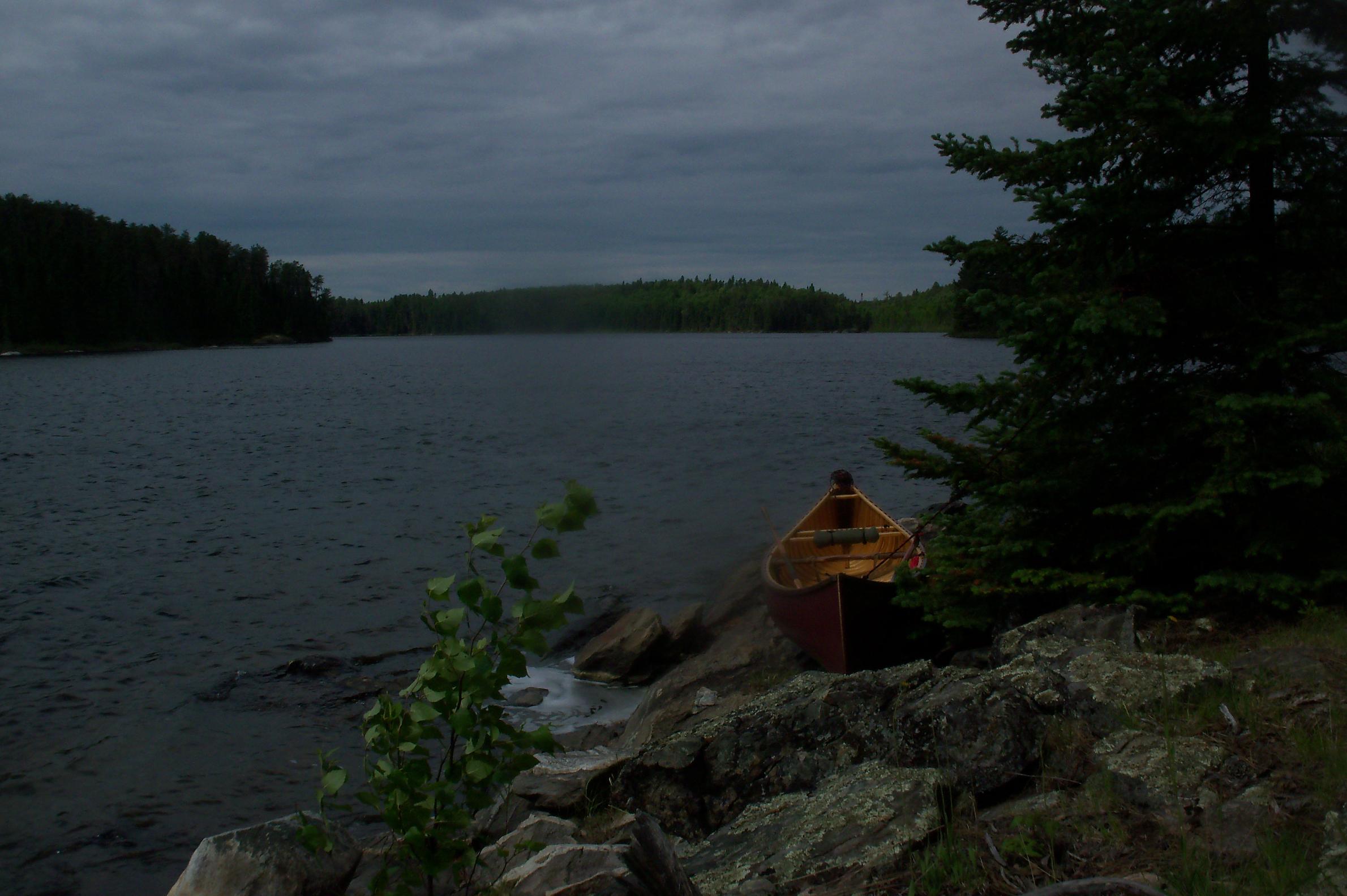 As our trip came to an end, we headed back north, rubber necking along the way. I also once again hurt my knee ( I guess my body was not meant to be a paddler) and I would have to get out of the canoe often to stretch it out. We would travel by 5 am and often by about 9 or so, It was time for some breakfast.

Here is a picture of a shore breakfast of eggs on our way to back to Batchewaung Lake. 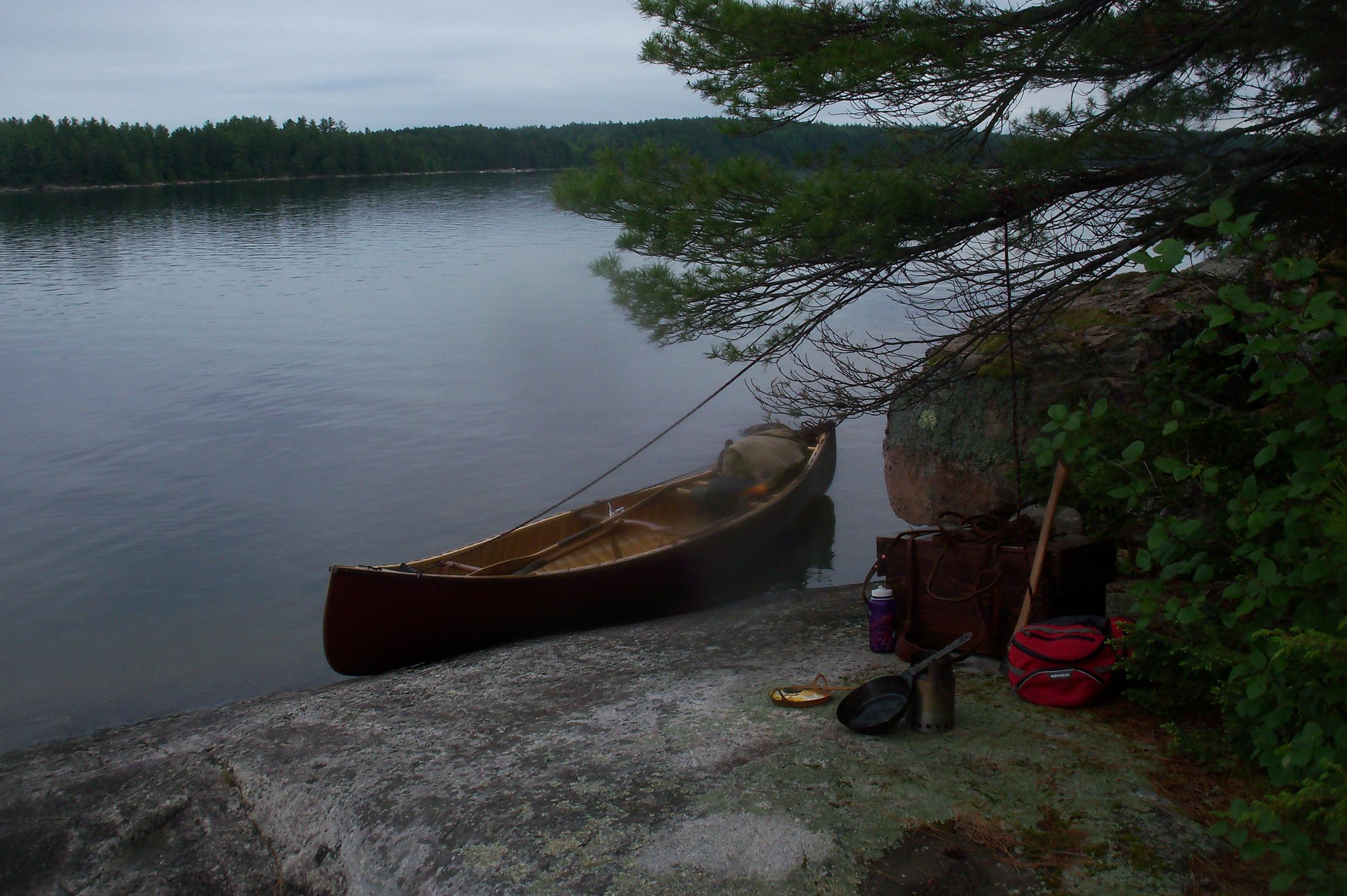 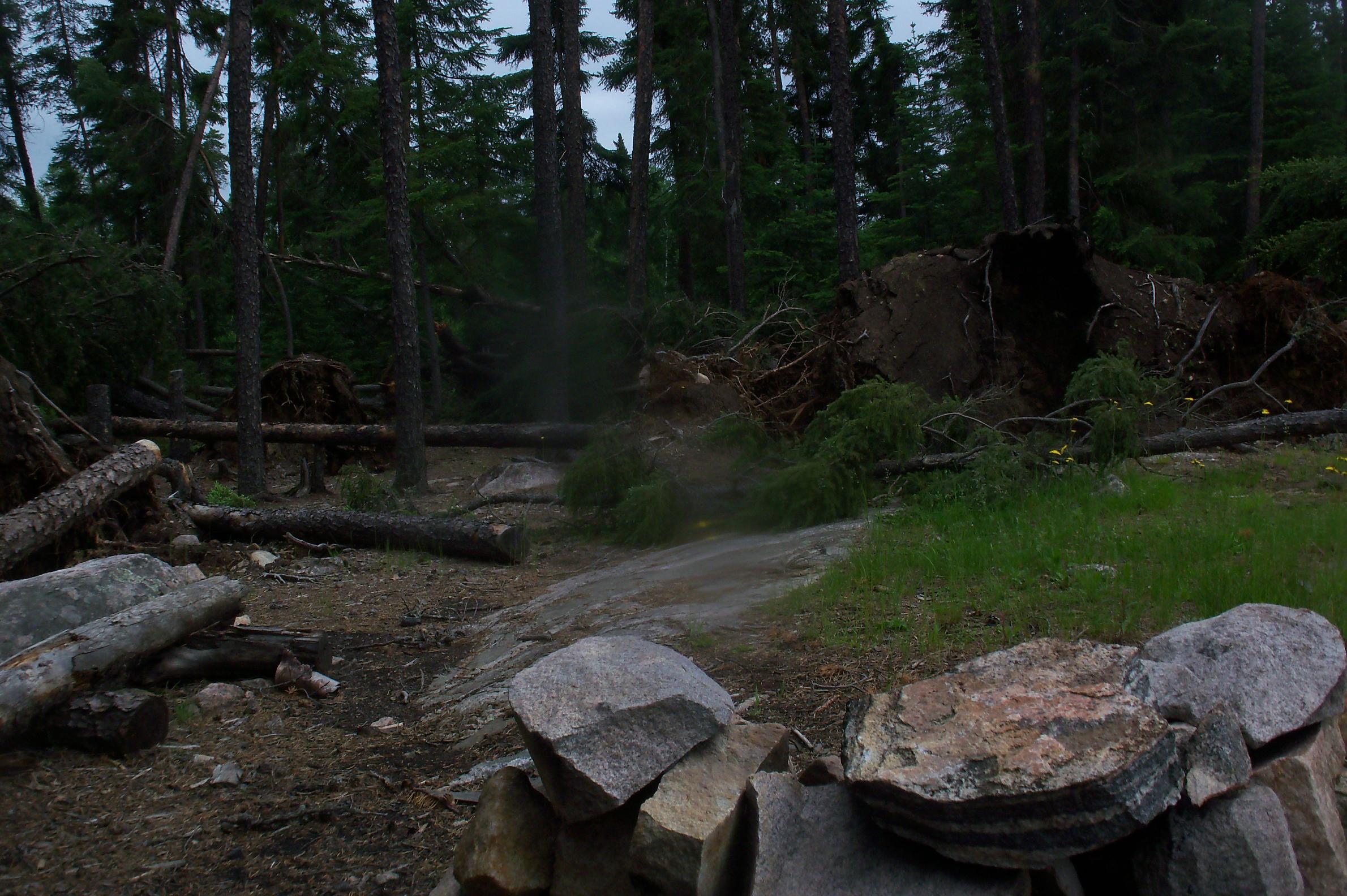 2 days latter, as the weather once again improved, Jake and I found ourselves at the friendly dock of the 5 acre Island home of VWP. We were once again greeted with friendly faces and helping hands. In no time our gear was put away and Jake and I were greeted to scrambled eggs, hash browns sausages and toast as well as a nice hot cup of coffee. What a great way to return form a trip. Latter, we were offered grilled cheese and soup. had a shower and a change of clothes and a much needed nap. We were invited for supper, pork chops and stuffing ( unbelievable!!!) and our comfy cabin. At 5 am, breakfast and coffee, followed by a shuttle to the dock and we were back to the truck and driving the 11 hours back home the states.

Jake and I after we completed our Journey 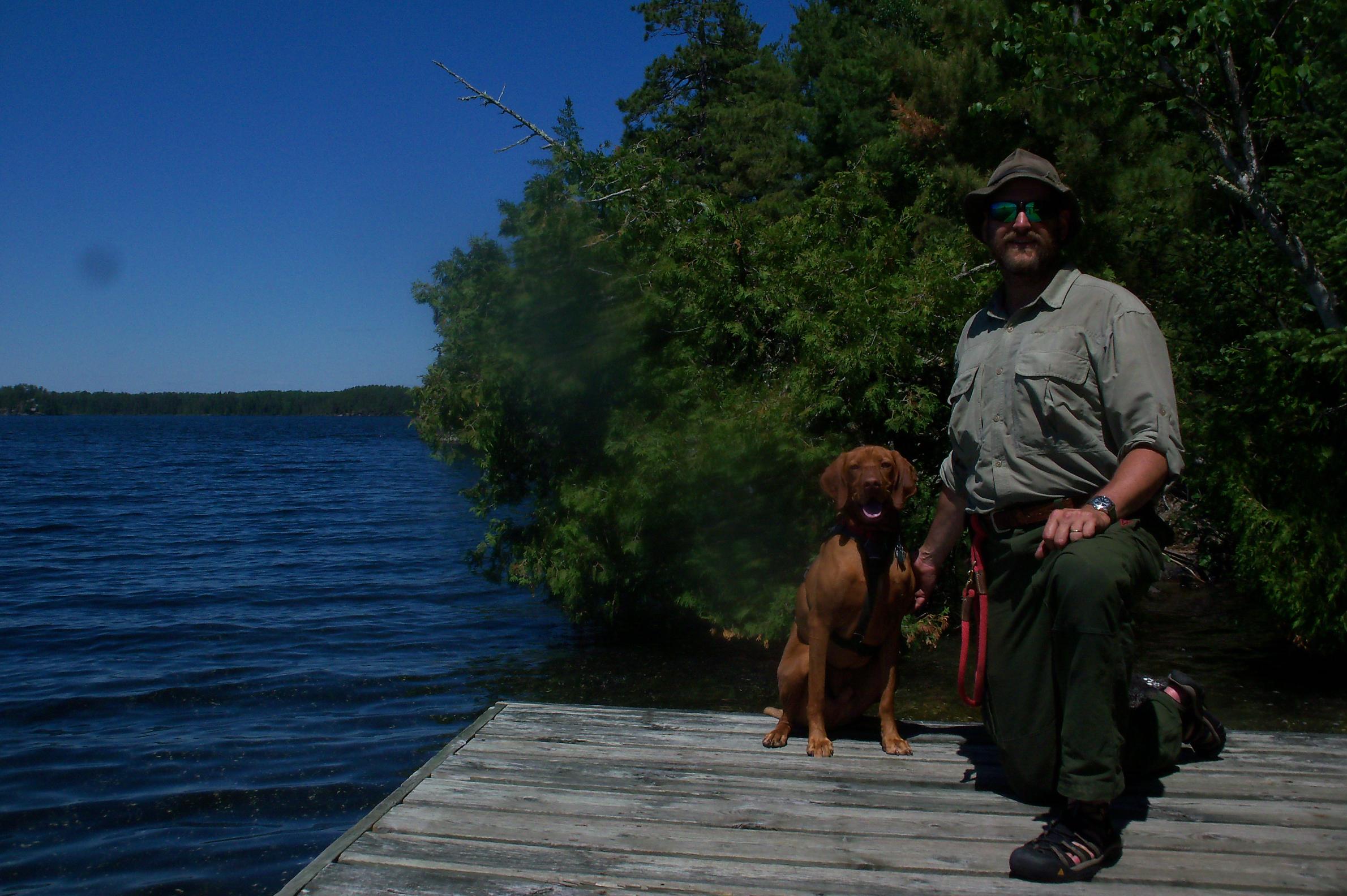 So, I never expected to meet anyone on a solo trip. However, on this occasion, it was so nice to meet such wonderful people. I really needed to get away on this trip. The Quetico gave me exactly what I needed; solitude intermixed with an occasional social interaction. This was neither the longest nor the most heroic, challenging trip I have been on - but it was truly one of the best. The beauty of the back country, the fishing, the wonderful interactions with fellow wilderness travelers and of course the blessing of traveling with my best buddy Jake, all such blessings I will carry with me for a long time. Even with my bad knee, the wind and rain days, the storms ... I am remembering my awesome trip and dreaming about next year - where to point the bow of my canoe and paddle to freedom next? I just may have to visit VWP again, they really treat you like family and LOVE dogs!