Stuart River Up to Canadian Border
by GopherAdventure

Trip Type: Paddling Canoe
Entry Date: 06/09/2018
Entry Point: Stuart River (EP 19)
Exit Point: Moose/Portage River (north) (EP 16)
Number of Days: 8
Group Size: 5
Trip Introduction:
My dad and I do an annual trip each year and my son has become a part of this as well. This year my uncle Joe and his son Tristan were able to join us to make it a group of 5. This was Tristan's first time in the BWCA. We entered at EP 19- Stuart River on Saturday, June 9th after dirtbagging it in the trucks the night before. We woke and shuttled a vehicle over to the Moose River EP as that is where we decided to exit.
Discuss Trip: View Discussion Thread (4 messages)
Day 1 of 8
Saturday, June 09, 2018 We woke to a drizzly morning and immediately had to don the rain gear which was conveniently at the top of my son Doug's backpack. We scarfed down some muffins, bananas, blueberries and coffee (which we grabbed in a thermos the night before from an Ely gas station). Dave and Joe drove the trucks over to EP 16 to drop one off while Tony, Tristan and Douglas started tackling the 480 rod opening portage. This portage wasn't nearly as bad as it was last year when I did it with my wife, as conditions were pretty dry. We got all of the gear down to the water and soon enough, Dave and Joe were coming down the trail with the last of our gear. I had to run back 450 of the 480 rods because Joe and Dave accidentally left both sets of keys in my truck (we needed Joe's keys to make the trip with us so that we could drive his truck back to get mine when we exit). It wasn't a big deal, just set us back a few minutes. The paddle up the Stuart River is so scenic. The river winds a lot, which lends itself to surprises around some corners. Unfortunately, we did not sneak up on any moose, but we did see lots of waterfowl and beavers and one large beaver dam that we had to portage around. The final portage into Stuart is an easy one that gradually falls to the waterfall which is a nice one with lots of rock formations and cool spouts. We set up camp at the island site on the south side of the lake, although, there was only one other group on the lake that day, so I'm pretty sure we could have had our pick of the remaining four sites. The island site was sufficient and has a nice and easy landing on the north side of the point. We set up camp and got out for some evening fishing after a dinner of stuffing with foil pack chicken and gravy. Immediately, Joe hooked into a monster Pike, I guess it to be about 35 inches, but gerthy, definitely over 10 pounds. Of course we released her, but with the new regs (2 Pike, none between 30-40 inches), we couldn't have kept her if we wanted to. We caught a few smaller walleye and released all of them, Douglas was so busy pulling walleyes in that I hardly had a chance to fish much. Good problem to have. After a while we decided to head back to camp and have a fire and cocktail as everyone was pretty beat from the first day's work. It was a hardworking first day, but well worth it. 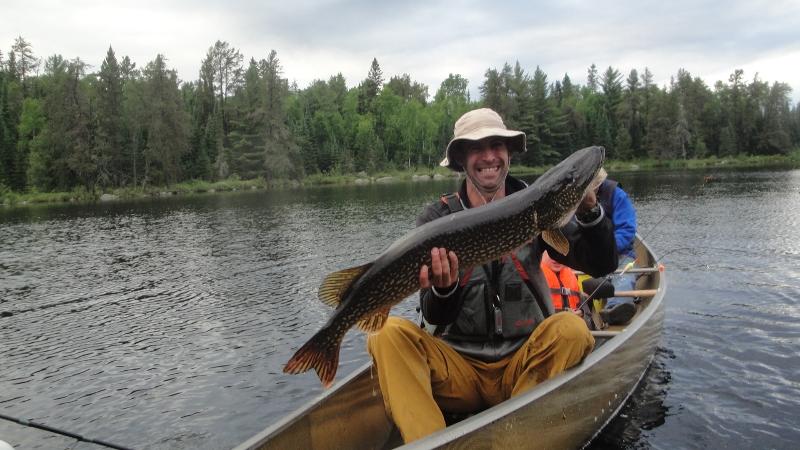