Trip Type: Paddling Canoe
Entry Date: 06/28/2018
Entry & Exit Point: Moose/Portage River (north) (EP 16)
Number of Days: 3
Group Size: 2
Trip Introduction:
Each year I make an early summer trip with my best friend from college. He is mostly fixated on fishing, while I'm searching for wilderness connection as well as a few walleyes for dinner. For this year's trip, we decided to tackle a river route, and after much deliberation we decided to enter at Moose River and head north. Our plans were to fish on the way in and stay wherever the walleyes were biting. It just so happened that Nina Moose provided plentiful fishing and surprising solitude.
Discuss Trip: View Discussion Thread (4 messages)
Day 1 of 3
Thursday, June 28, 2018

With all gear and canoe strapped in, I began my drive north at approximately 4am Thursday morning. I've been exceptionally pleased with my new racking system. Last summer I purchased the Thule canoe portage feet for my roof rack. Although the system is (in my opinion) overpriced for what you actually get in the box, I've found great peace of mind that I've observed no canoe shifting and minimal movement over the 240mi drive. 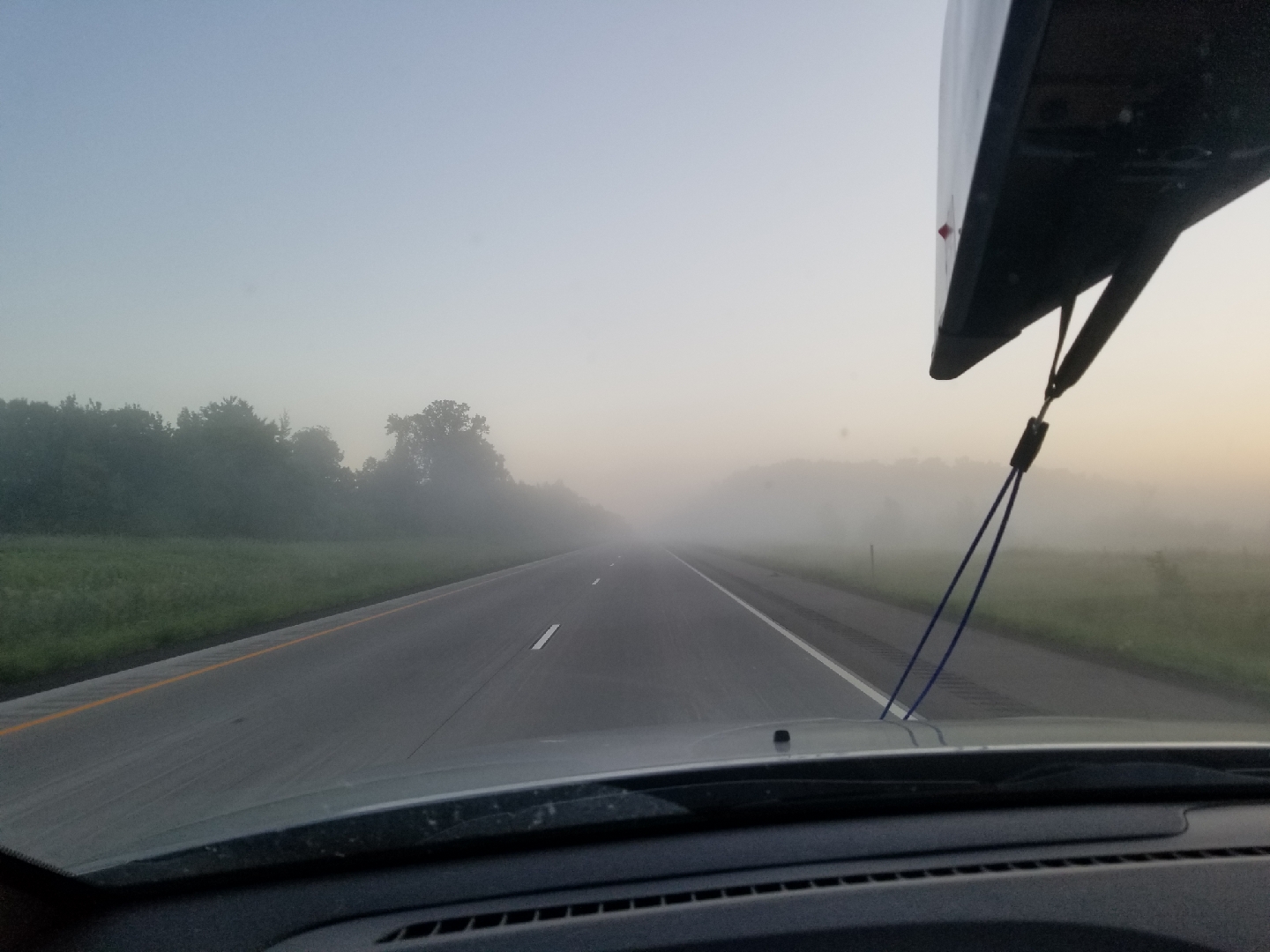 My college friend lives in Buhl, and I meet at his house at approximately 7:30am. He quickly loads his gear and we head back east to Ely.

Once we arrive in Ely, we stop into the New Arrowhead bait shop across from Voyageur North for leeches, then shot over to the Kawishwi Ranger Station before heading up the Echo.

It seems we hit the jackpot for a put-in day. The sun is brightly shining and winds are nonexistent. I made an emergency pit stop at the Angleworm latrine (lots of coffee), then soon enough we were at the Moose River entrance.

The Moose River entrance was crowded. There was a van in the staging area offloading 4-5 canoes, and another group's packs set next to the trailhead. This is a new experience for us as we typically gravitate to the more secluded areas of the BWCA, but this is what we anticipated and we were very happy to be finally hitting the trail. We quickly passed two groups on the trail as we were single-portaging, and found that we had the canoe landing to ourselves. Seriously, what a beautiful day! 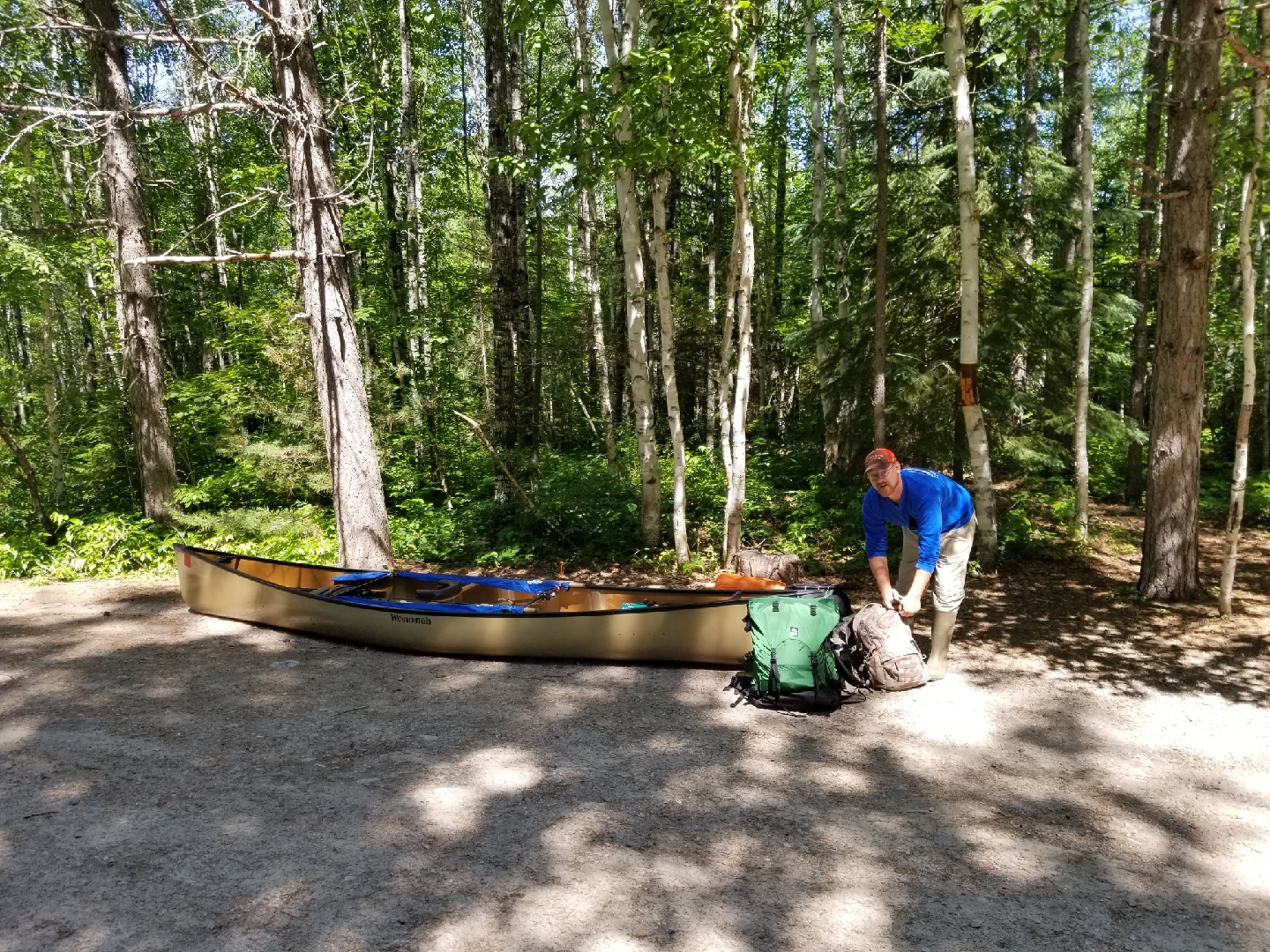 Our travel down the river included two very small portages. Again, to our surprise, we did not encounter another group at either portage or along the river until I passed by fellow BWCA.com member Dicecupmaker. We quickly exchanged pleasantries and were along our merry way.

Both my partner and I could not stop commenting on the beautiful scenery along the river as well as the tree diversity. Honestly, this may have been one of my favorite paddles in the BWCA thus far. 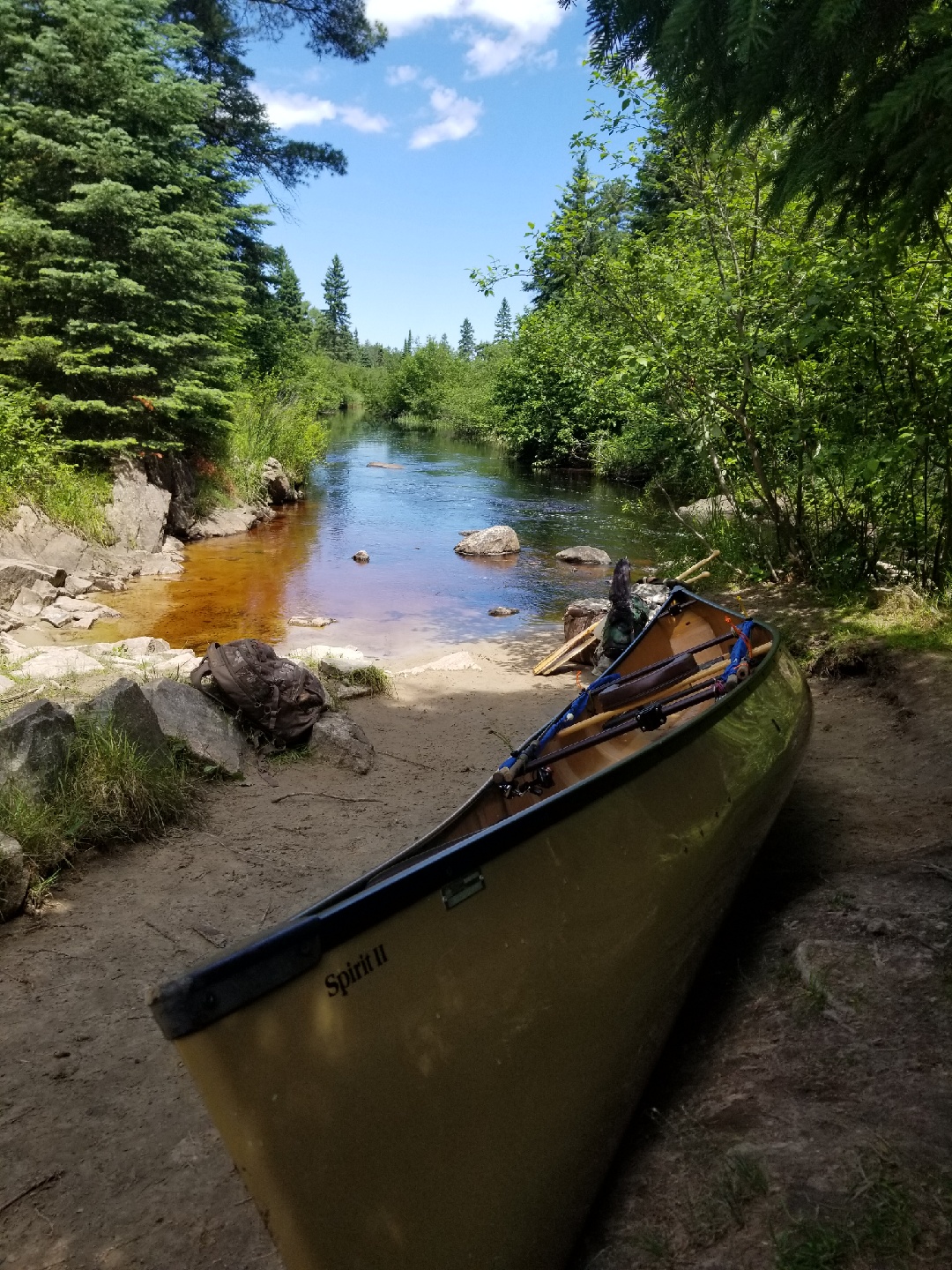 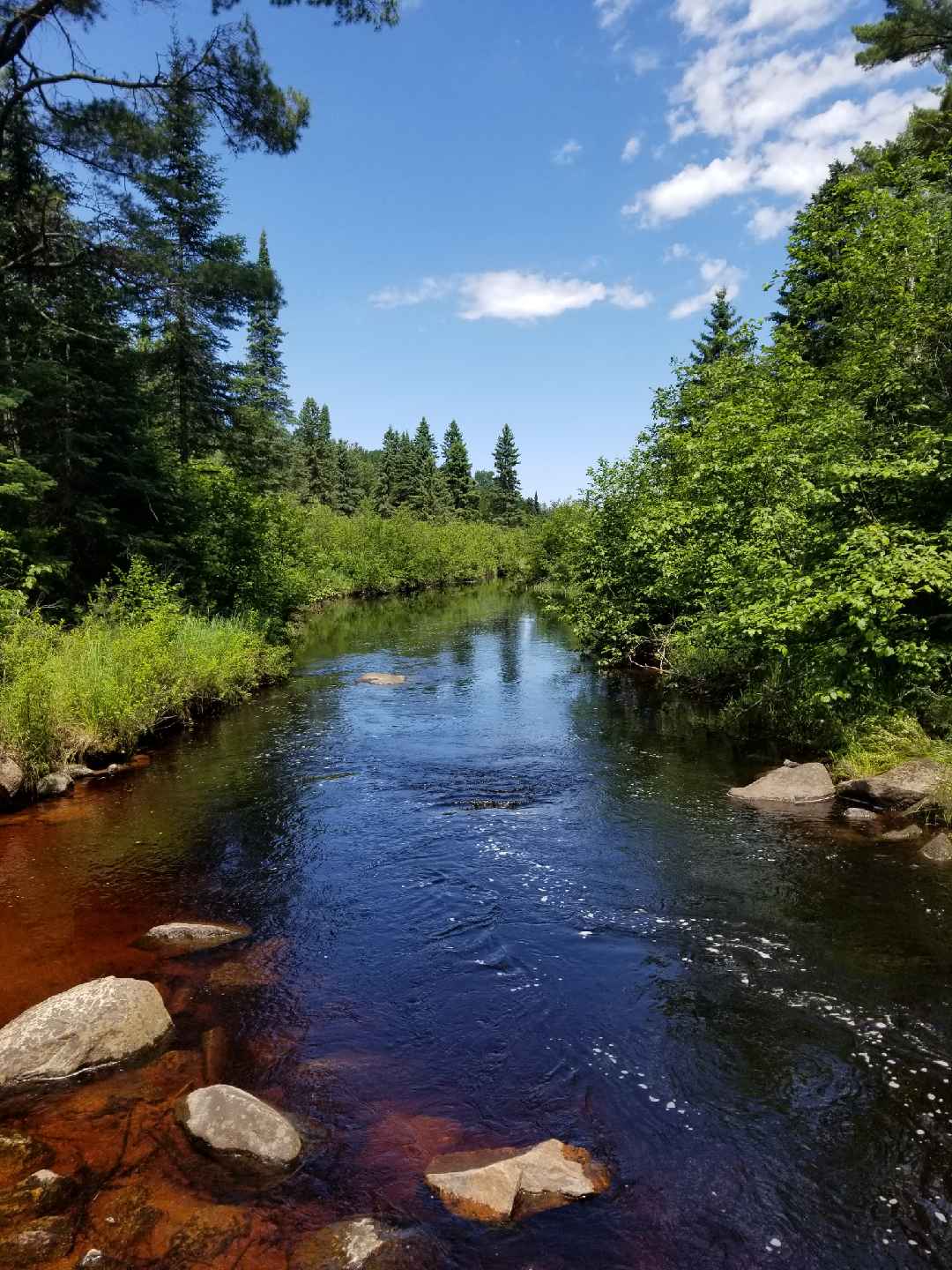 As we made our way towards Nina Moose, we began discussing our gameplan. We'd never seen Nina Moose, so we decided that we would paddle around the perimeter scoping campsites and fishing along the way. We were expecting to find occupied campsites, but thought we'd give it a try. As we began fishing along the rocky shoreline of the east side of the lake, we quickly picked up a couple of nice walleyes. We threw those back and thought maybe we should camp here for a night... 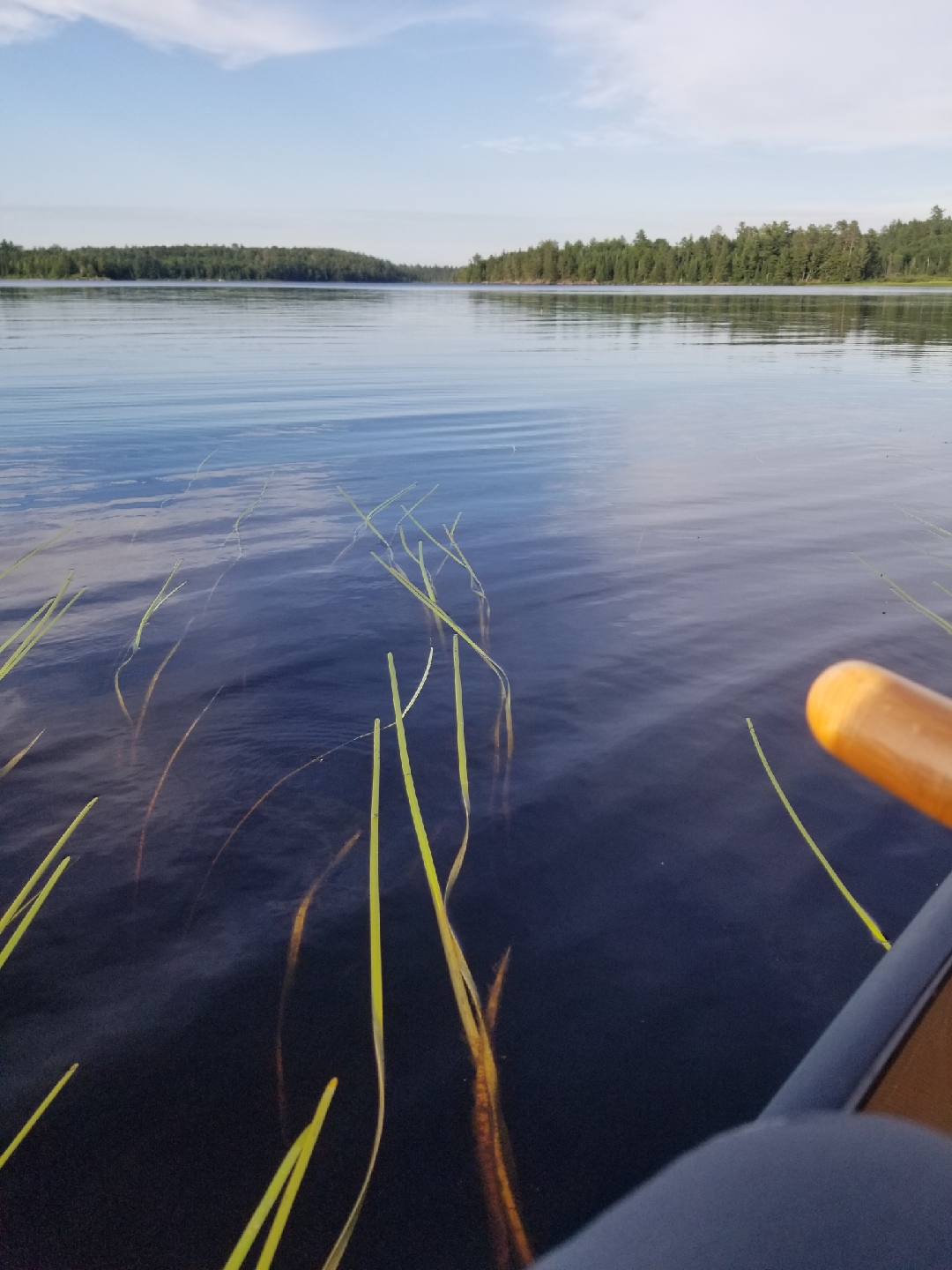 As we scoured the eastern shoreline, we found that each of the first 4 sites encountered were open. We decided to grab a site on the southern edge of the eastern bay. For a busy lake we thought the site was pretty clean - not much in the way of human traces. 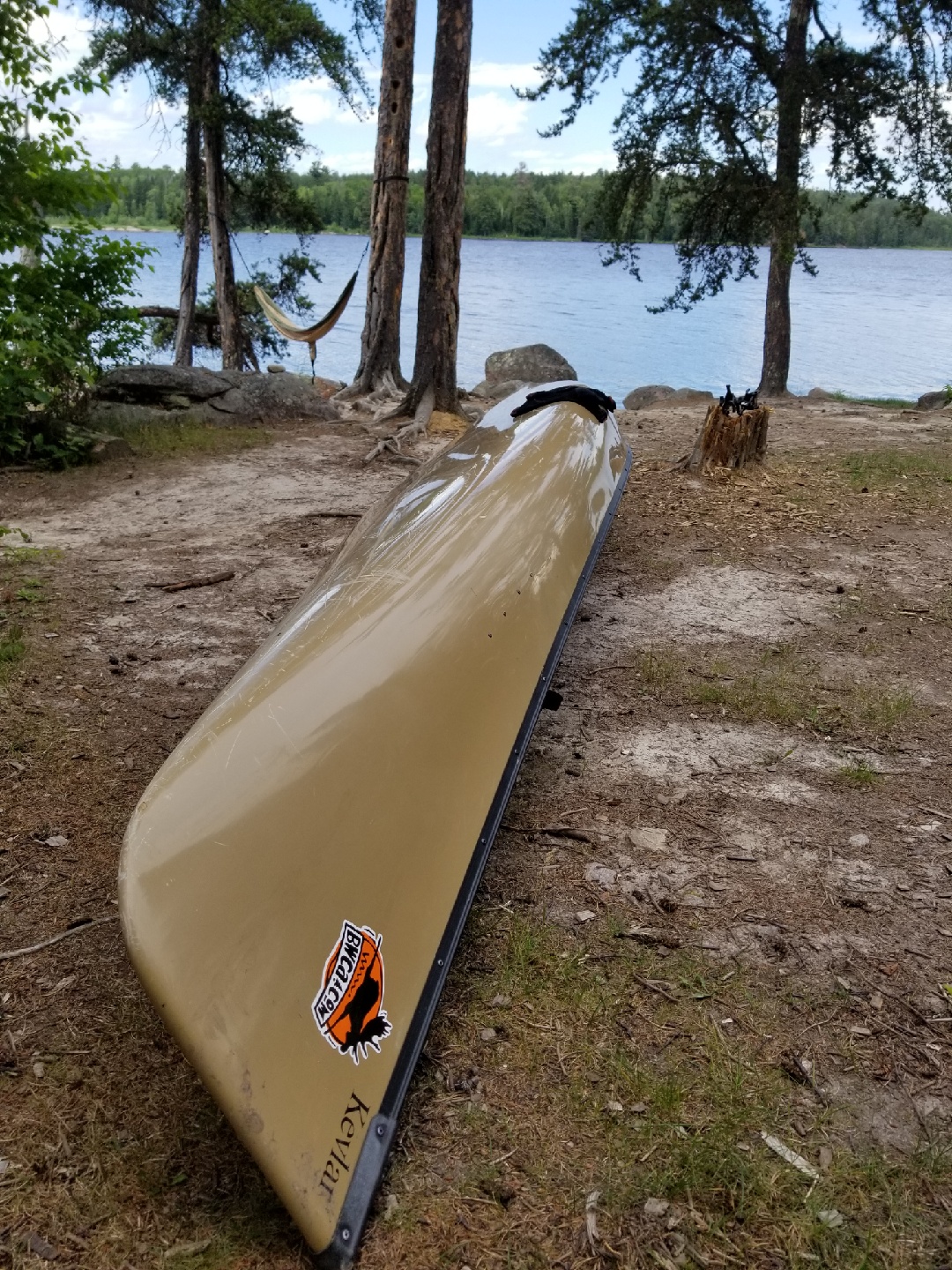 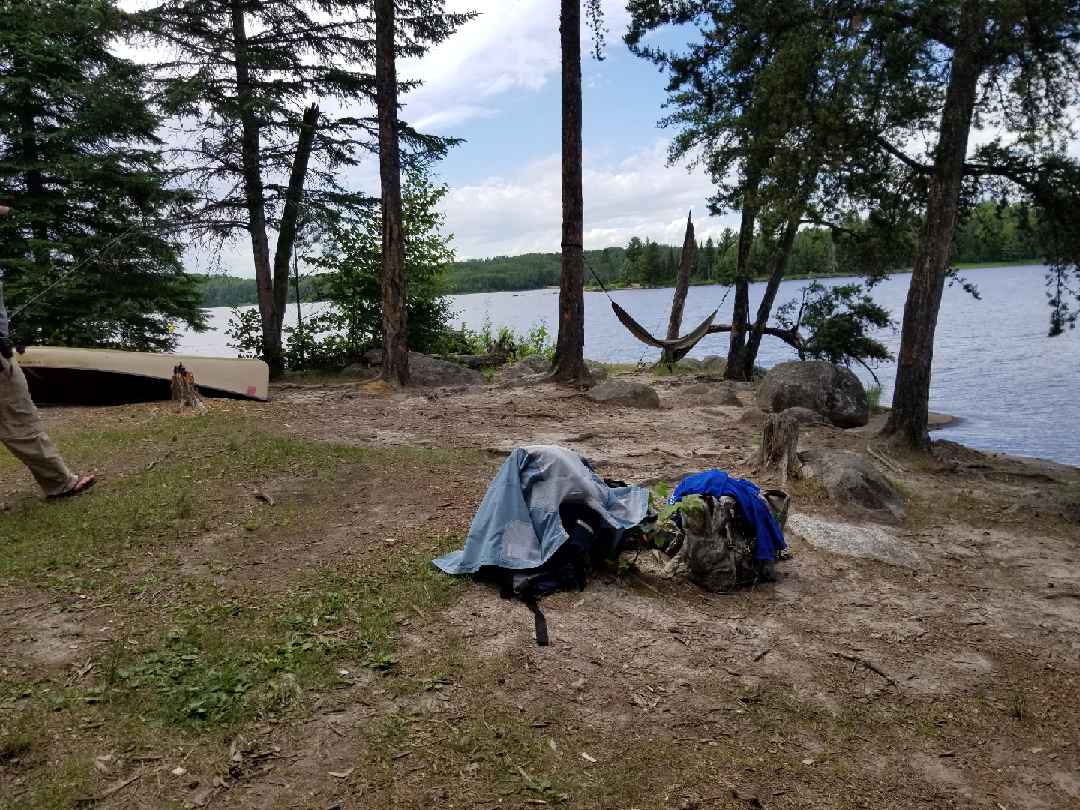 As per tradition, we quickly unloaded our gear and got a bobber in the water. As clouds began surrounding the lake, I picked up a very healthy smallmouth from the rocky shore. Things were looking good! 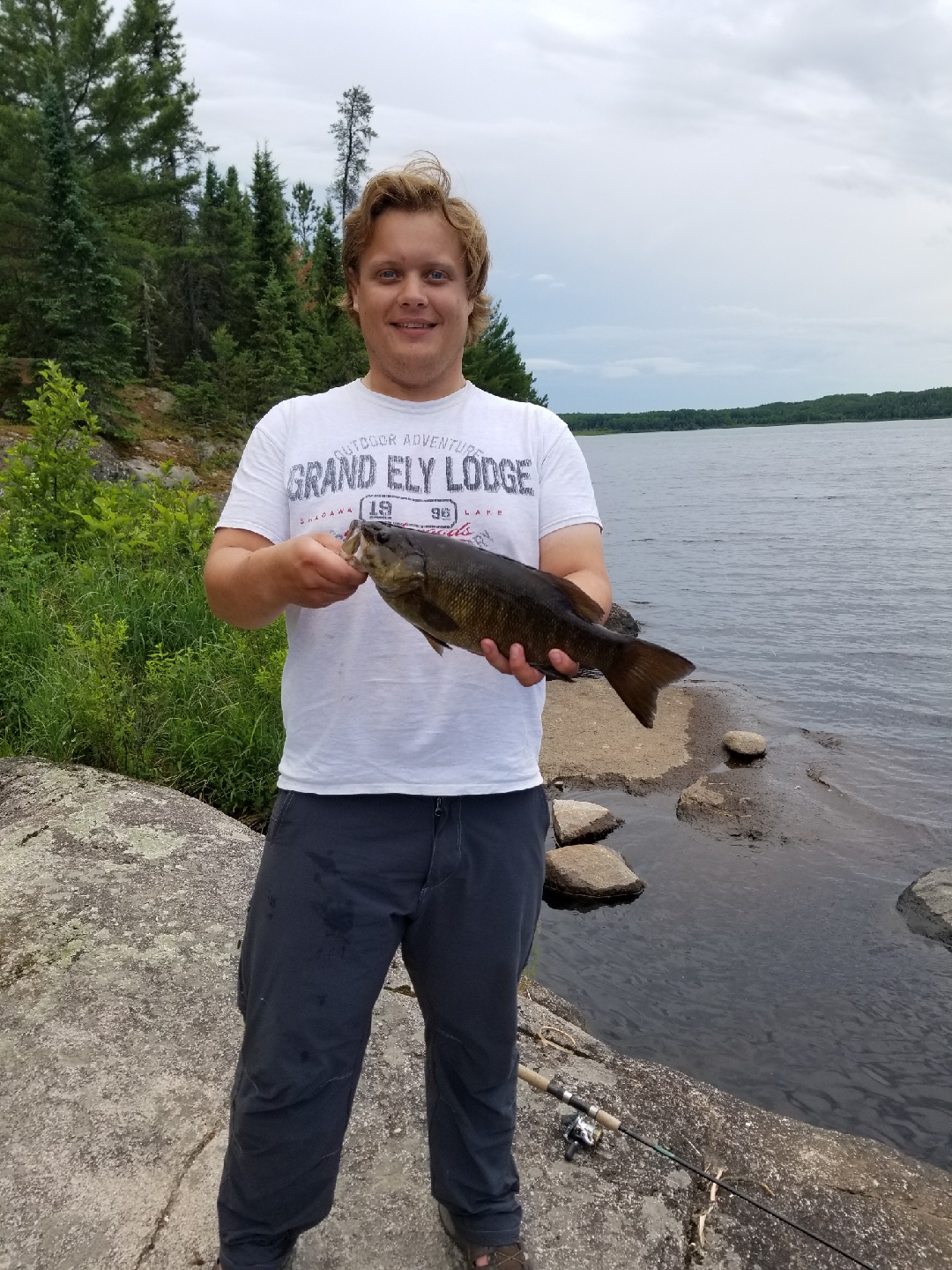 We spent the rest of the afternoon and evening setting camp and exploring out site. We found that canoe traffic was relatively light compared to what we expected, and we felt a great deal of solitude. I started jotting down notes and experiences in my new notepad that I picked up from Piragis. My goal is to record small details that I would otherwise forget between trips.

As evening approached we grilled up a steak and mashed potatoes (per tradition), then settled in and watched our bobbers from the rocks on the shoreline. 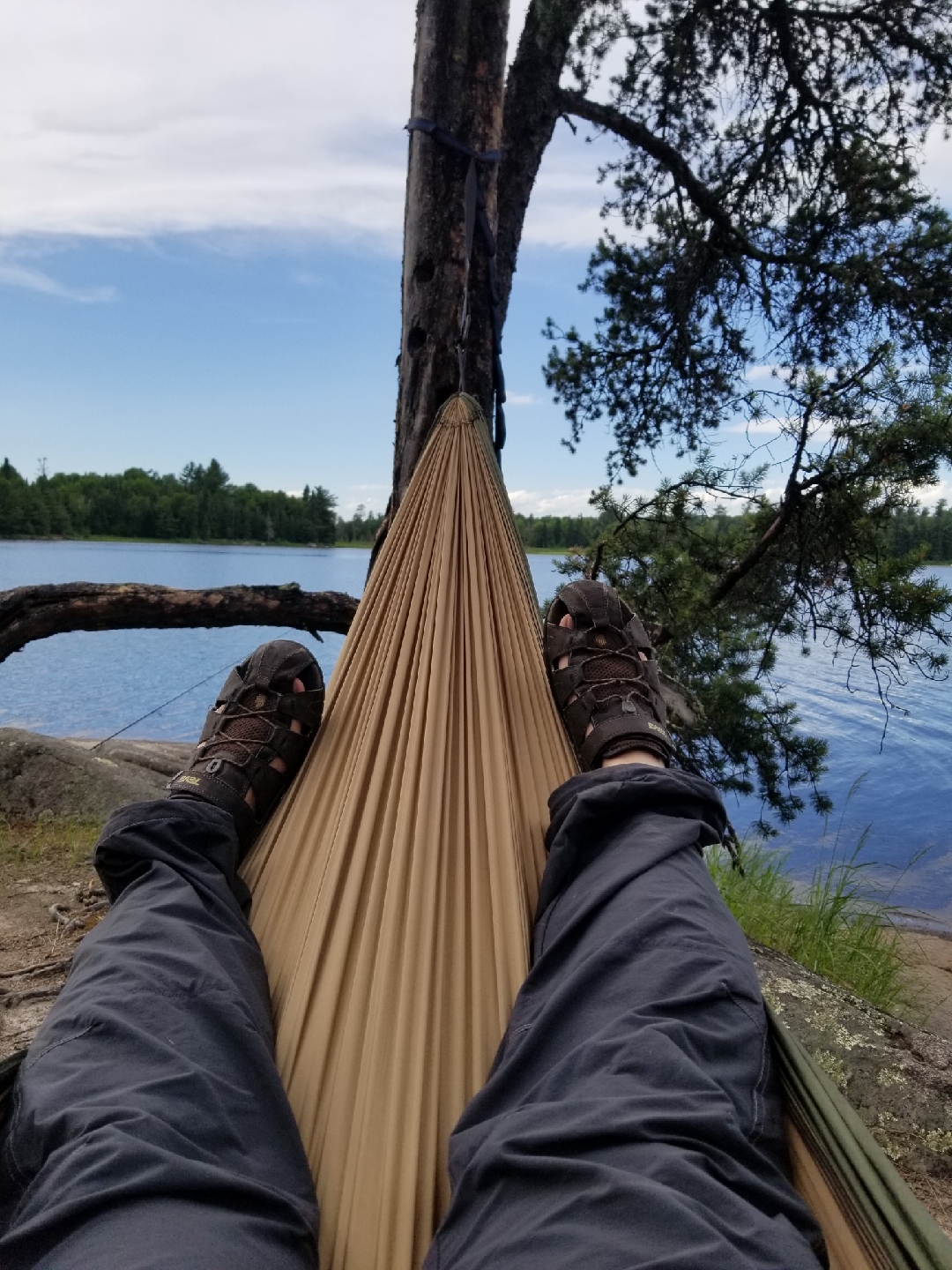 We picked up a few pike and panfish after dinner, then took in one of the most colorful BWCA sunsets that I've ever observed. 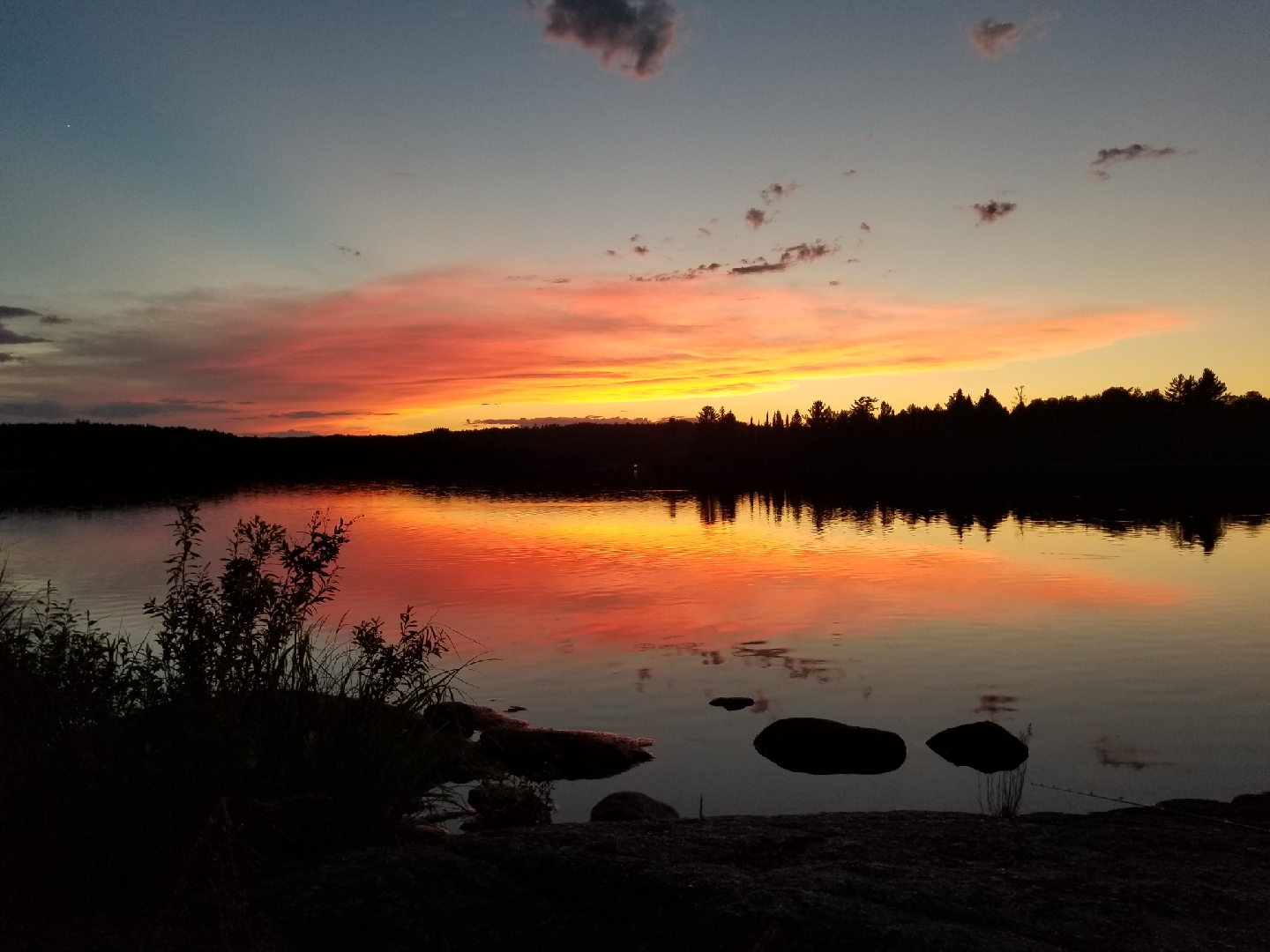 We soon retired back to the tent and quickly fell asleep.