Quetico/Jean by Kayak
by Luckee

Trip Type: Paddling Kayak
Entry Date: 06/24/2018
Entry & Exit Point: Quetico
Number of Days: 9
Group Size: 1
Trip Introduction:
After a couple of cool experiences in BWCA (one long ago, one last year) it was high time to explore Quetico. The result was a wonderful trip.
Discuss Trip: View Discussion Thread (6 messages)
Report
I came from California for this trip, and airport delays stole a whole day from me. Nonetheless, Sunday was a good day to start, and a blue-hued walleye on Quetico Lake (after entering at Beaverhouse) was a good way to start! 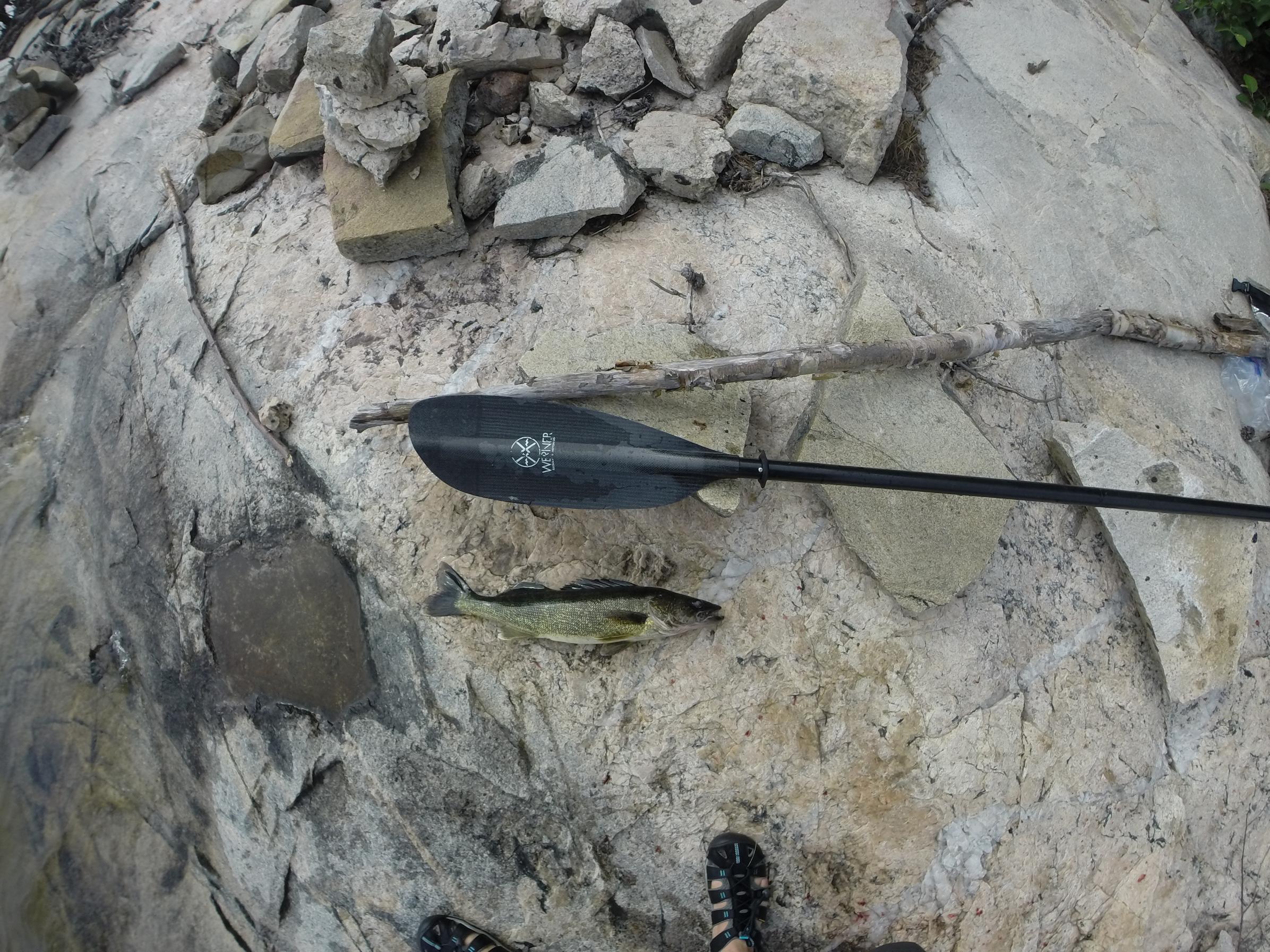 There was still some cloud cover on day 2, my first full day out, and I am glad to report a Grand Slam by mid-afternoon. What surprised me was that getting the smallie was the hardest chore (though that would get easier later). 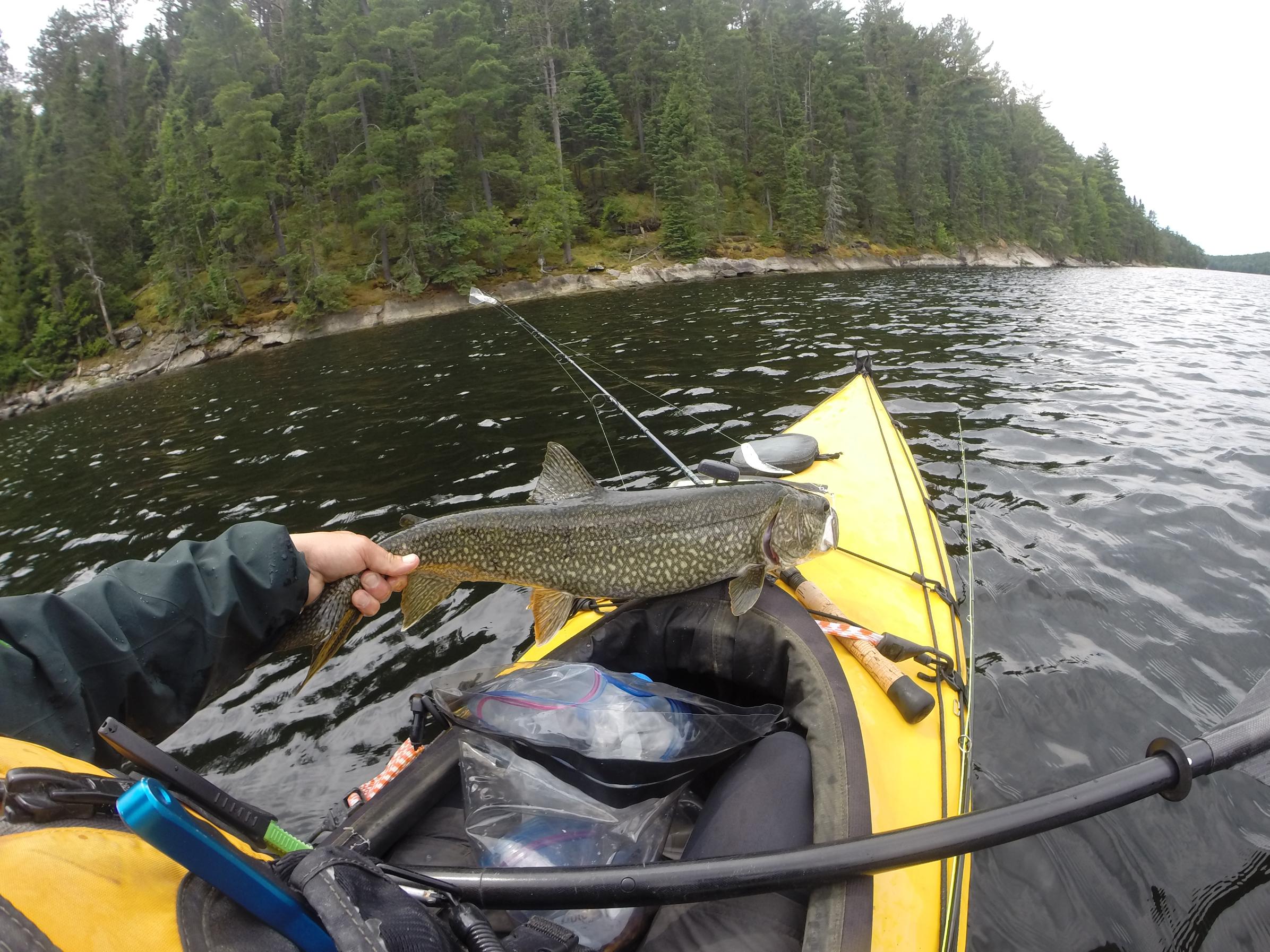 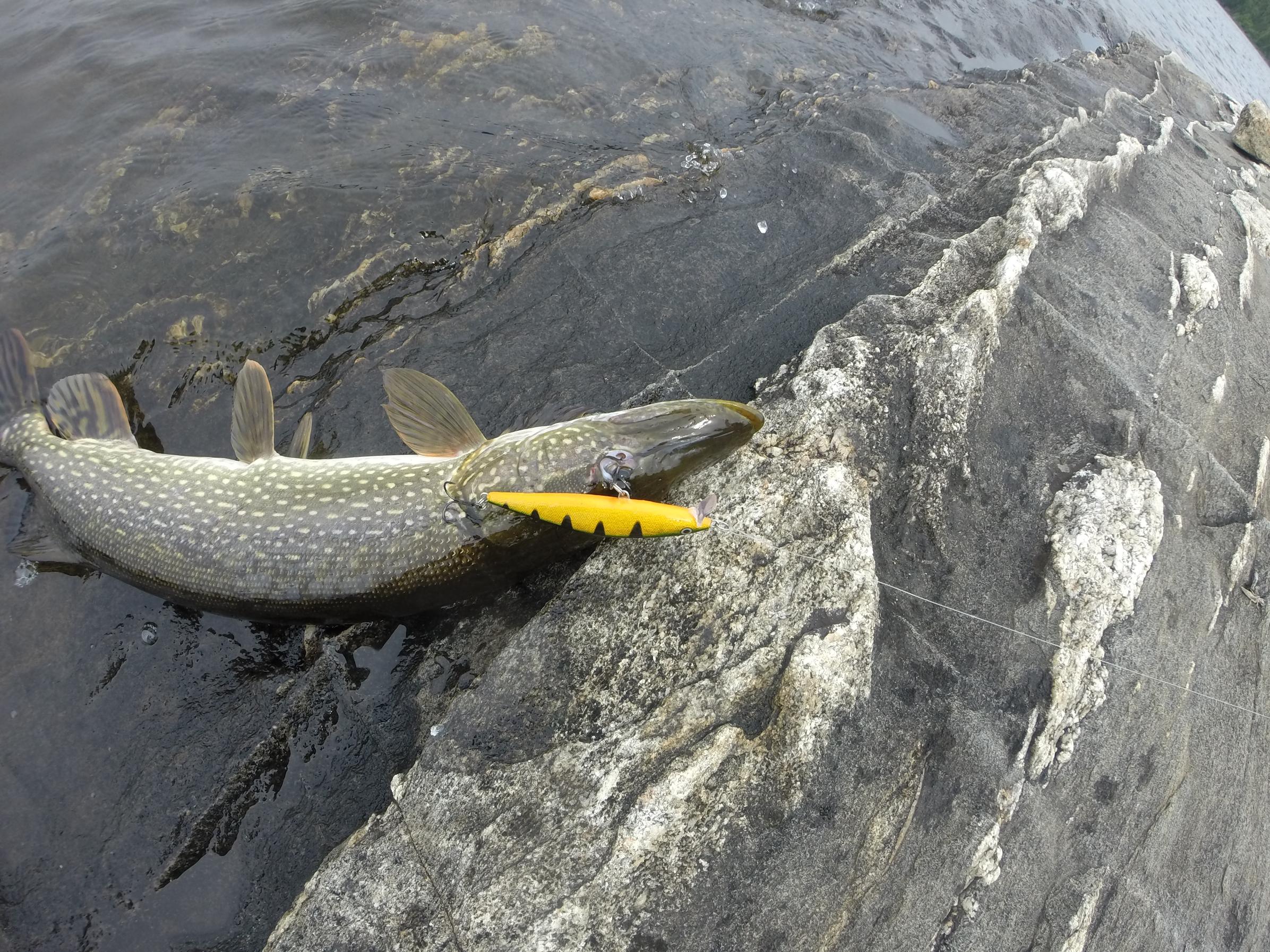 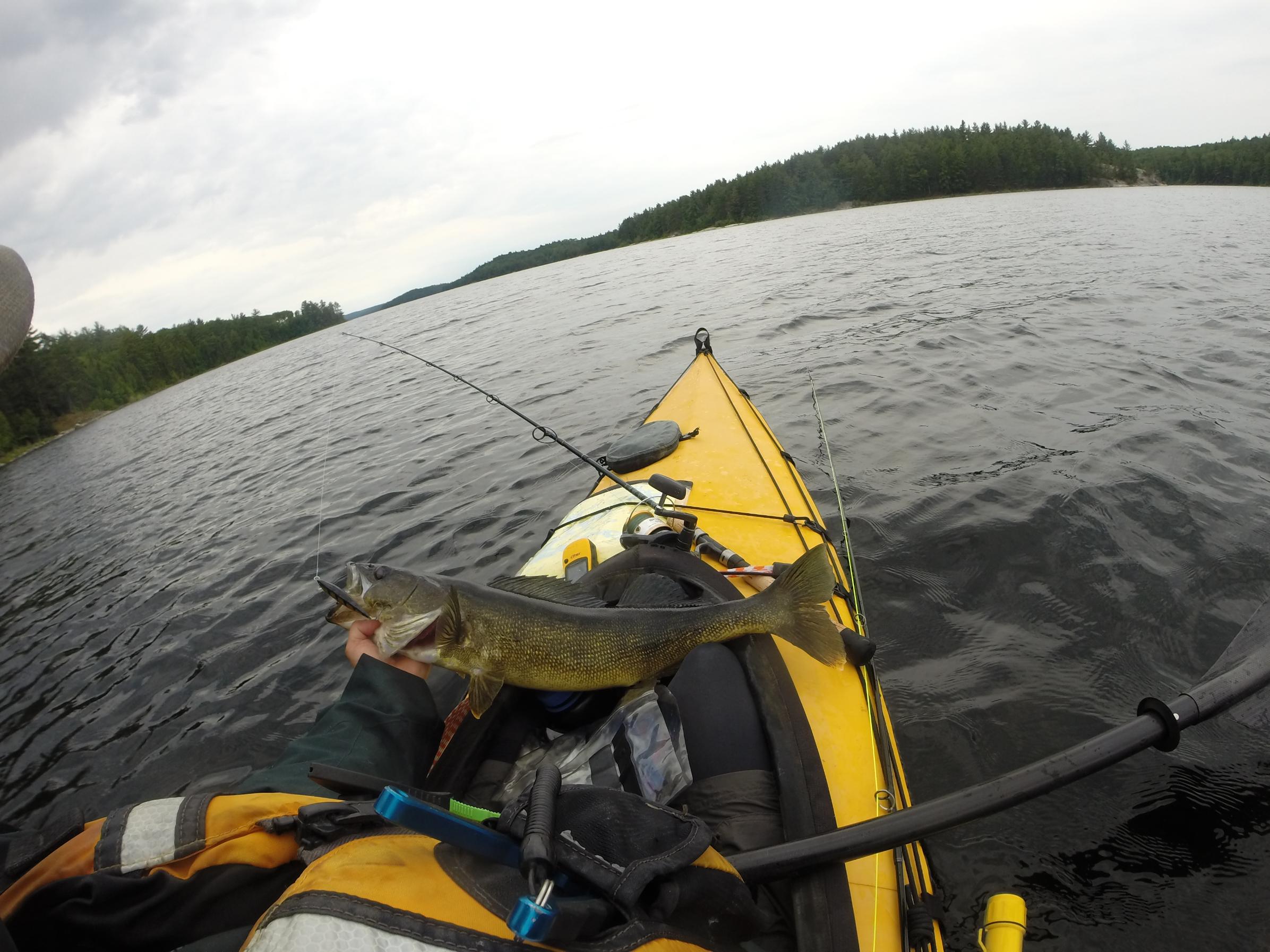 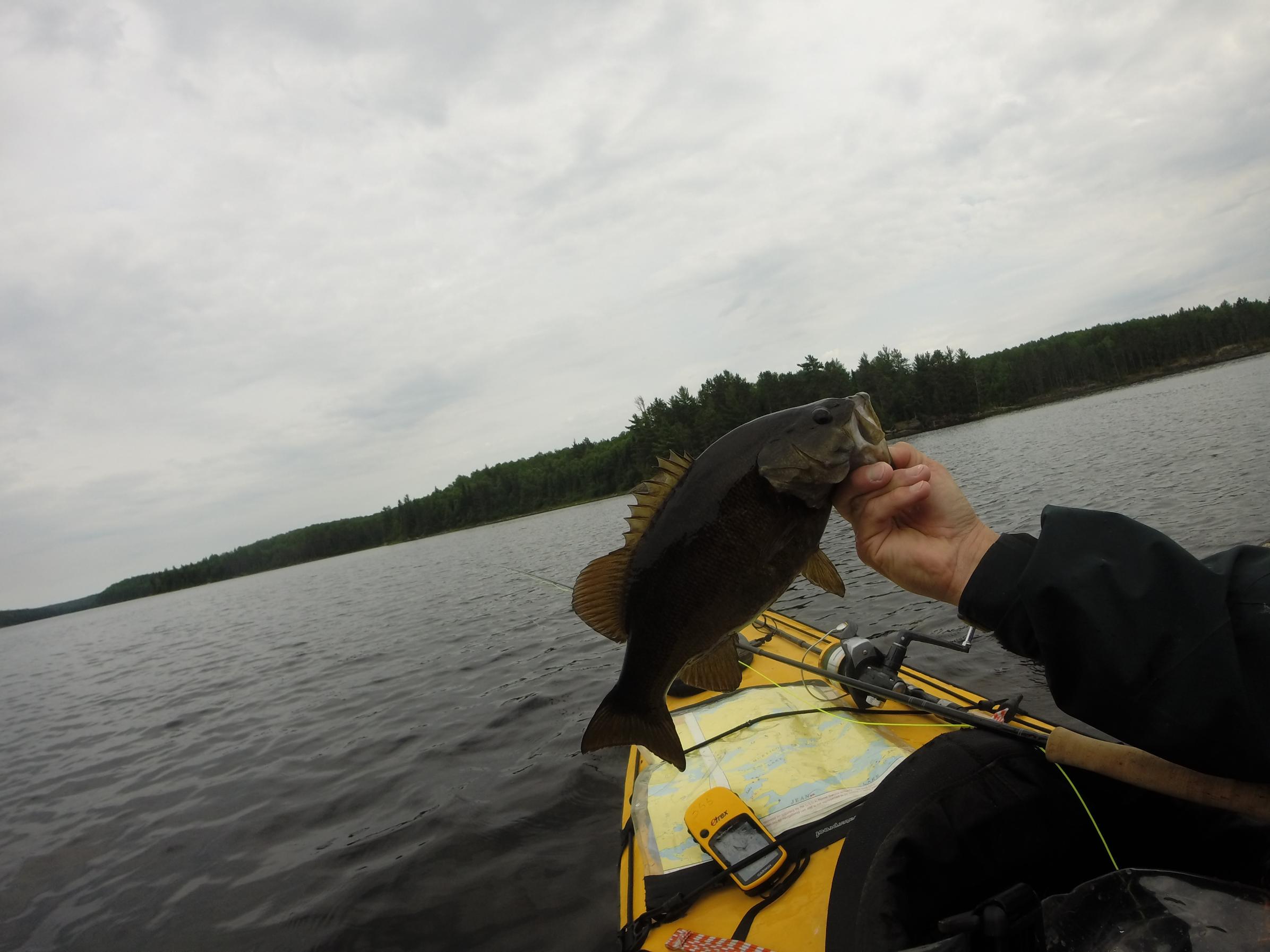 That pike took a hook in the eye, but since it was around the edge and debarbed, I hoped he might make it. I caught another fully healthy pike the next day, and removed a fully barbed, largish treble hook tied straight to a couple inches of line, which to me suggests plunking bait. Are First Nation citizens allowed to do that maybe? In any event, the fish seemed to survive both sets of hooks. 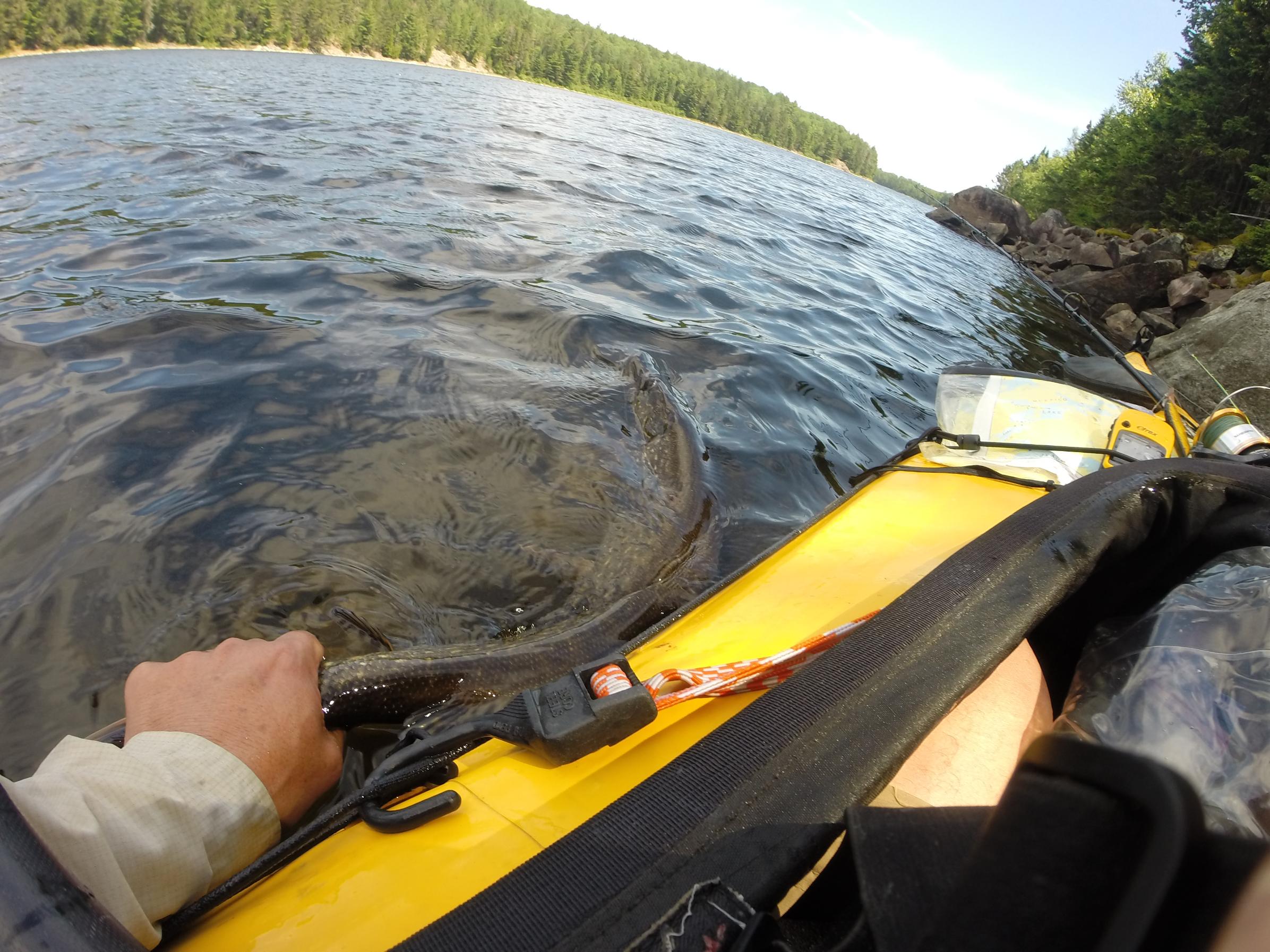 There was some traffic on Quetico, though it was nothing like what I saw last year around July 4th on Basswood. Only one "floating dog show" (three boats containing nine people and at least one dog, per my definition) passed my day 2 camp while a lounged through the morning. I made the portage over to Jean on my second full day, and found it hard but reasonable work. I know those are brief portages, but re-packing the yak each time gets old.

Had a few thunderstorms at Jean, but they passed through at jus the right times, and one even left a rainbow. 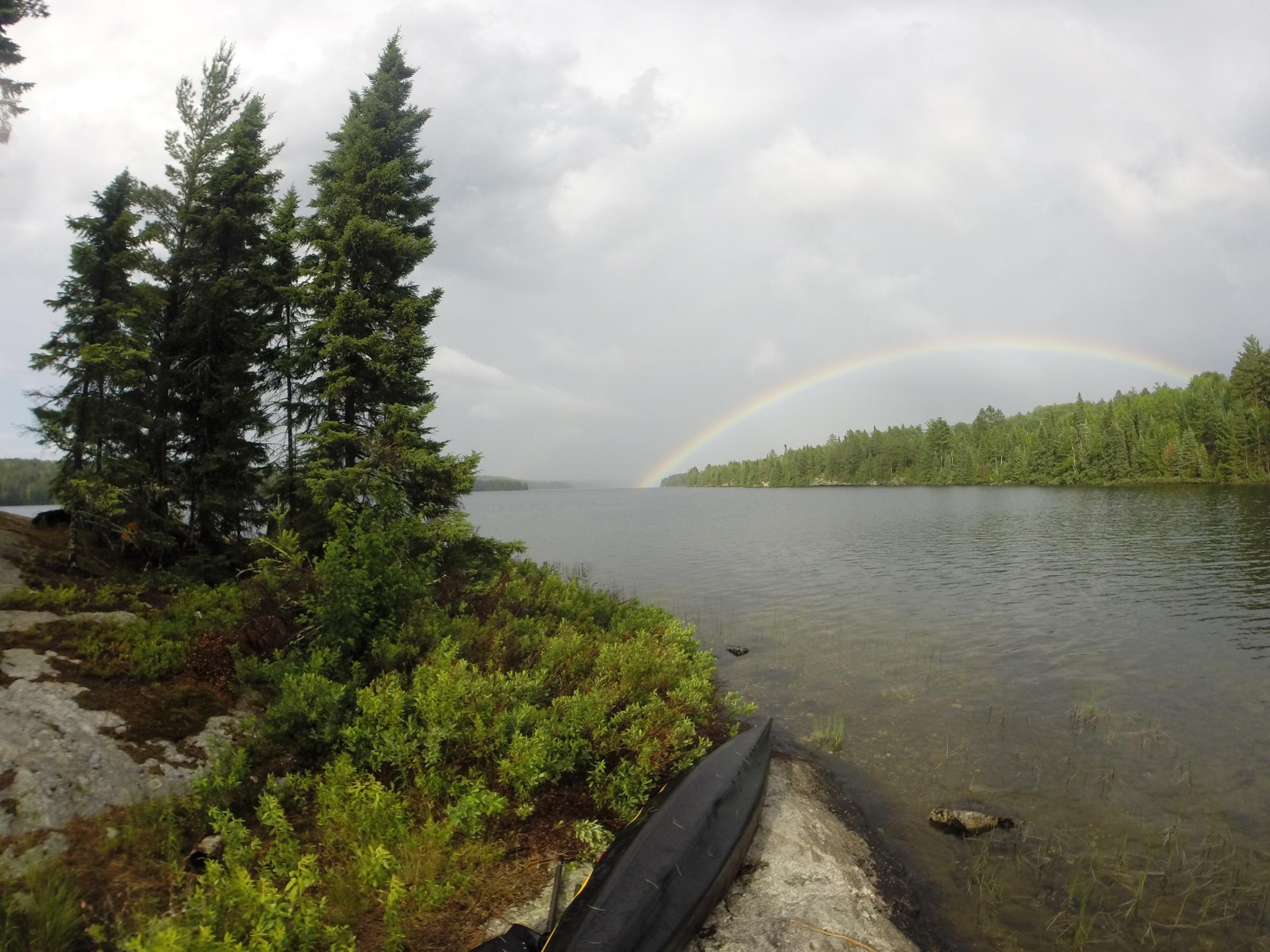 Between blows and lightning shows, I applied myself to fishing, completing a couple more grand slam days plus a couple half slams :) 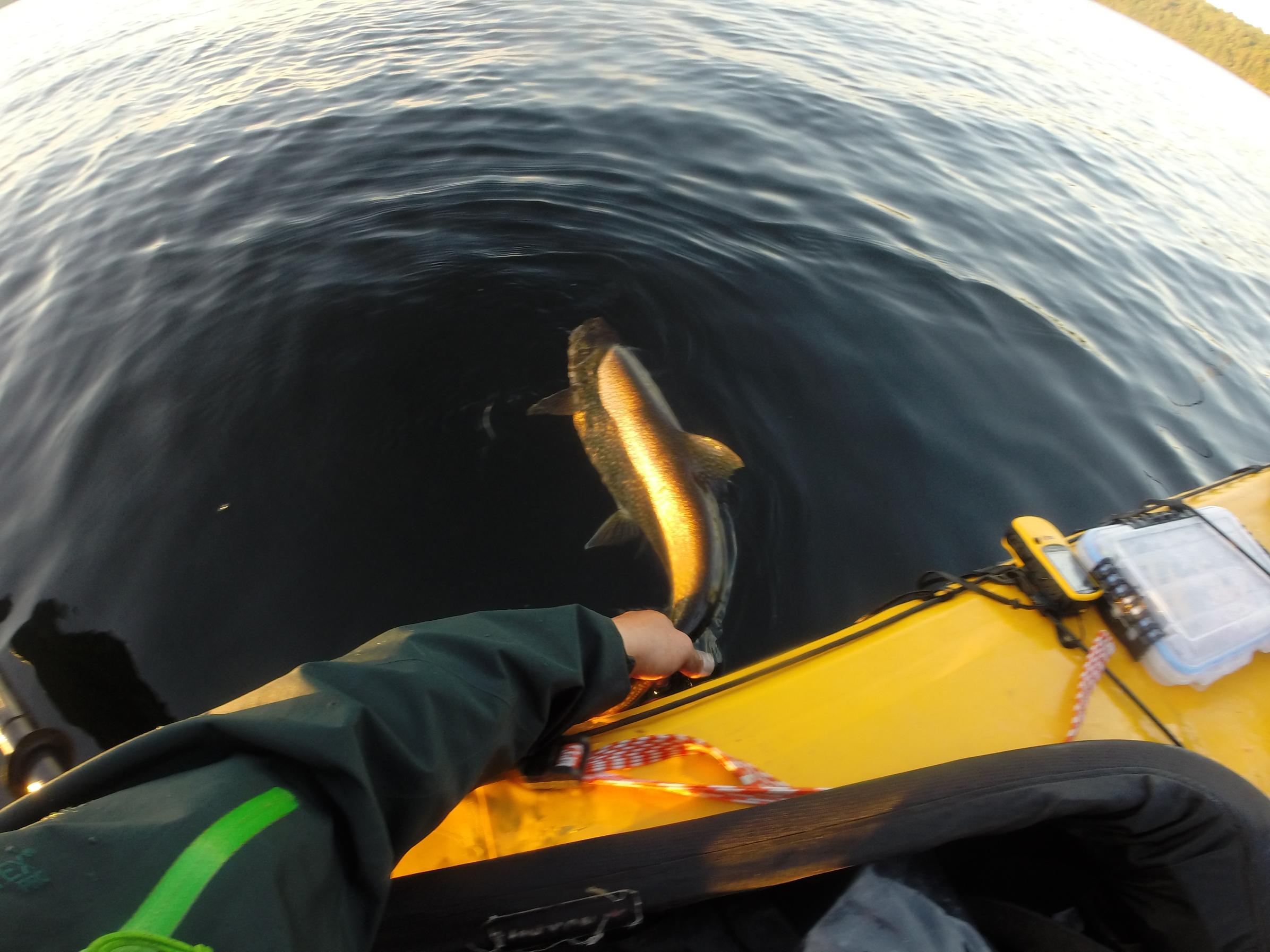 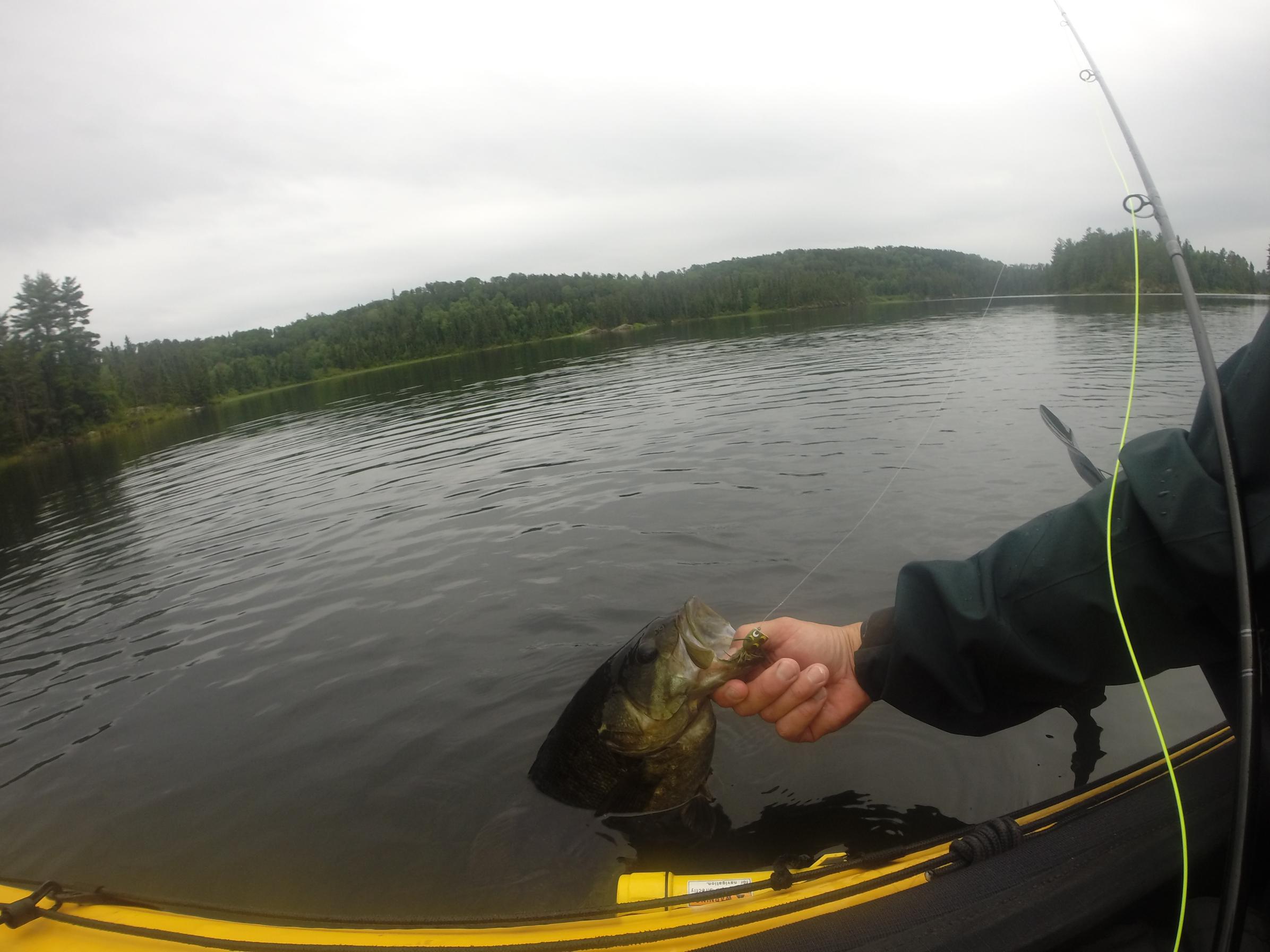 My topwater fly fishing methods worked a whole lot better for bass when there was some cloud cover, so after the worst thunderstorm passed, I jumped out and took advantage. I've heard a few complaints about their non-native status in many areas, but they're just such a handsome, fun fish -- and if you have a walleye-skunk day, they're not bad to eat either. 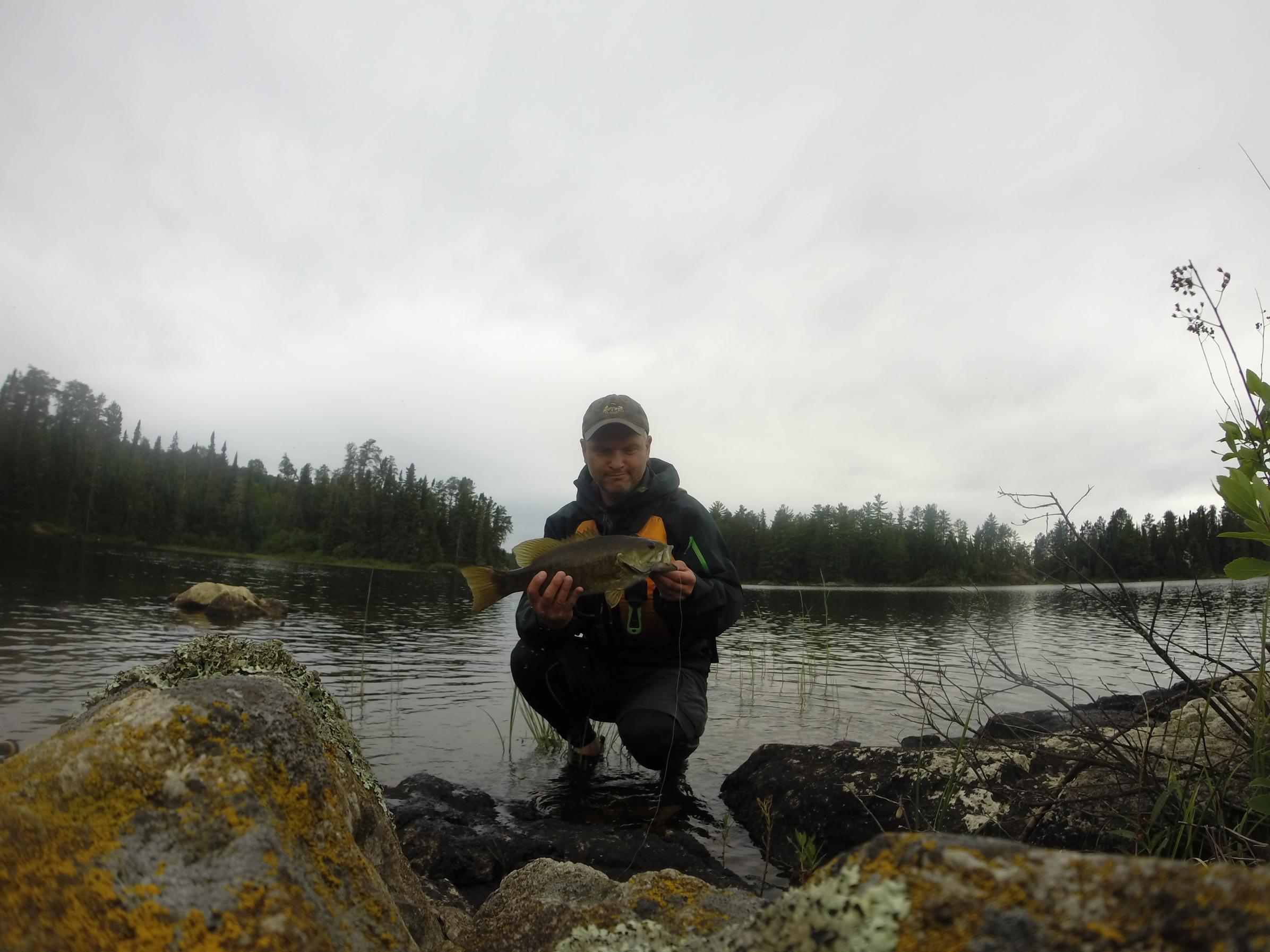 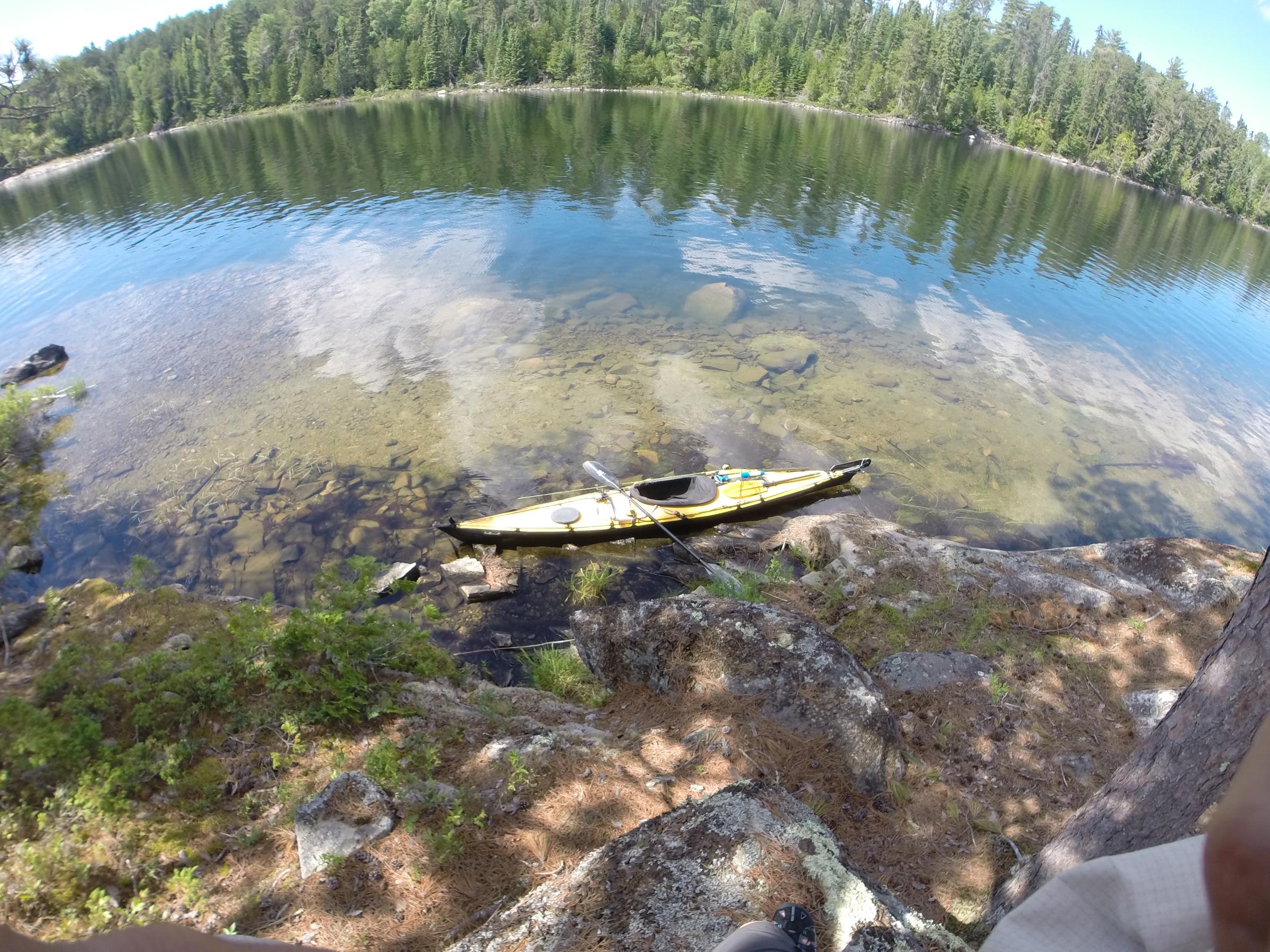 Eight days were perfect, though I got some reactions at the permit station and elsewhere suggesting that most canoeists would generally move around a lot more in that time. I basically used Quetico Lake as a highway back and forth from the Jean portage, spending two nights each way and doing a lot of fishing on the way. I could have easily spent the whole time checking out the various corners and back bays of Quetico, and may well do that next time. Barring some kind of injury or demise, there most definitely will be a next time. Traveling in Ontario is easy and pleasant, and Quetico Park is splendid.

Only one dark spot on my trip (besides constant headwinds on my travel days): on the way home, the Beaverhouse portage suddenly got very crowded with two different parties, one of which parked right next to my half-packed yak. A gentleman stepping out of the boat took a spill, grabbing my coaming and filling the boat with muddy water as it half-capsized. No biggie, I pumped it out while asking him if he was OK (honestly thinking, he might want to turn around and go home if he can't get in and out of a canoe safely). But I did notice the boat tracked strangely while navigating the trip's worst headwind back across Beaverhouse in whitecaps, and then when I took my Feathercraft boat all apart, lo! the aluminum keel bar was sheared completely off the bow plate. It might have happened anywhere on the trip, but one has to suspect the portage-scene accident (the dude was tall and not small). My own policy is to wait and fish a bit more if I see folks at a portage; but you have no control over who comes in while you're packing.

Again, it was a fantastic trip, and I owe major thanks to Quetico Mike for tips on fishing and routes. I'll wait a polite interval before hitting everyone up for more good ideas for next year :)