Trip Type: Paddling Canoe
Entry Date: 06/20/2018
Entry Point: Brant Lake (EP 52)
Exit Point: Missing Link Lake (EP 51)
Number of Days: 5
Group Size: 2
Trip Introduction:
5 day 4 night trip from Round Lake entering through Brant EP to Little Sag, then back out through Missing Link and back to Round.
Discuss Trip: View Discussion Thread (6 messages)
Day 1 of 5
I drove up to Duluth on Tuesday the 19th to meet Adam and spend the night at his place. It was uneventful but while finalizing our gear we realized that we had not grabbed the permit from Duluth Pack before they closed. The plan was to get up by 5 in the morning and drive the 3 1/2 hours to the EP so we could be on the water by 10. Since we had forgotten the permit and Duluth Pack didn't open until 9, that meant we could sleep in and decided to sit outside with a drink and test out one of the fire starters I had made using sawdust, egg carton and wax.

We woke up at a decent time, got everything in the car and headed to the grocery store for the brats we both had been under the impression the other was getting. While there we also picked up some single serving mustard and soy sauce packets. Yes, we made sure all packets and pieces of them made it back in the trash bag.

Turns out that this was the day that President Trump was coming to Duluth so traffic and police presence was worse than usual. We got to Duluth Pack at about 9:20, watched the video and answered the questions with another group that was there as well, then got back on the road and I think we were leaving Duluth around 10-10:15. This late departure was frustrating and road construction made it worse.

Eventually we made it to Grand Marias and had lunch at Dairy Queen before heading up the Gunflint. We got to the EP at about 2:00 and got on the water around 2:30. The frustration bled off pretty quickly after getting on the water.

It was nice being on the water, but we didn't enjoy it for long. We portaged from Round to West Round, the water level was high so we put in about 30 rods early and pushed though the swampy stream to the pond of West round and quickly hit the portage to Edith. The burn in the area was pretty noticeable. There was a lot of underbrush, burnt stumps and trunks sticking out, and no eagles or turkey vultures. Portaging through the dense underbrush was a pain, I would much rather have old growth where we could see further and didn't get everything hung up on the underbrush. This was the case for most of the portages on this day and the next, but there was a stark contrast between the burn area portages and the ones not in the burn area.

The portage to Edith had a lot of boardwalk, not fun but better than walking in the water or tripping on rocks, which we did do too. Edith was even smaller than West Round but Adam forgot his lit cigar on a stump and we had to turn back to get it, both because it would be litter and because it could have started another fire. The portage to Brant was another short one and more of an annoyance in the hot sun, no shade because of the burn, and 80+ degree weather. At least we were finally entering the Boundary Waters. 3 portages in we finally launched the canoe into BWCA waters. 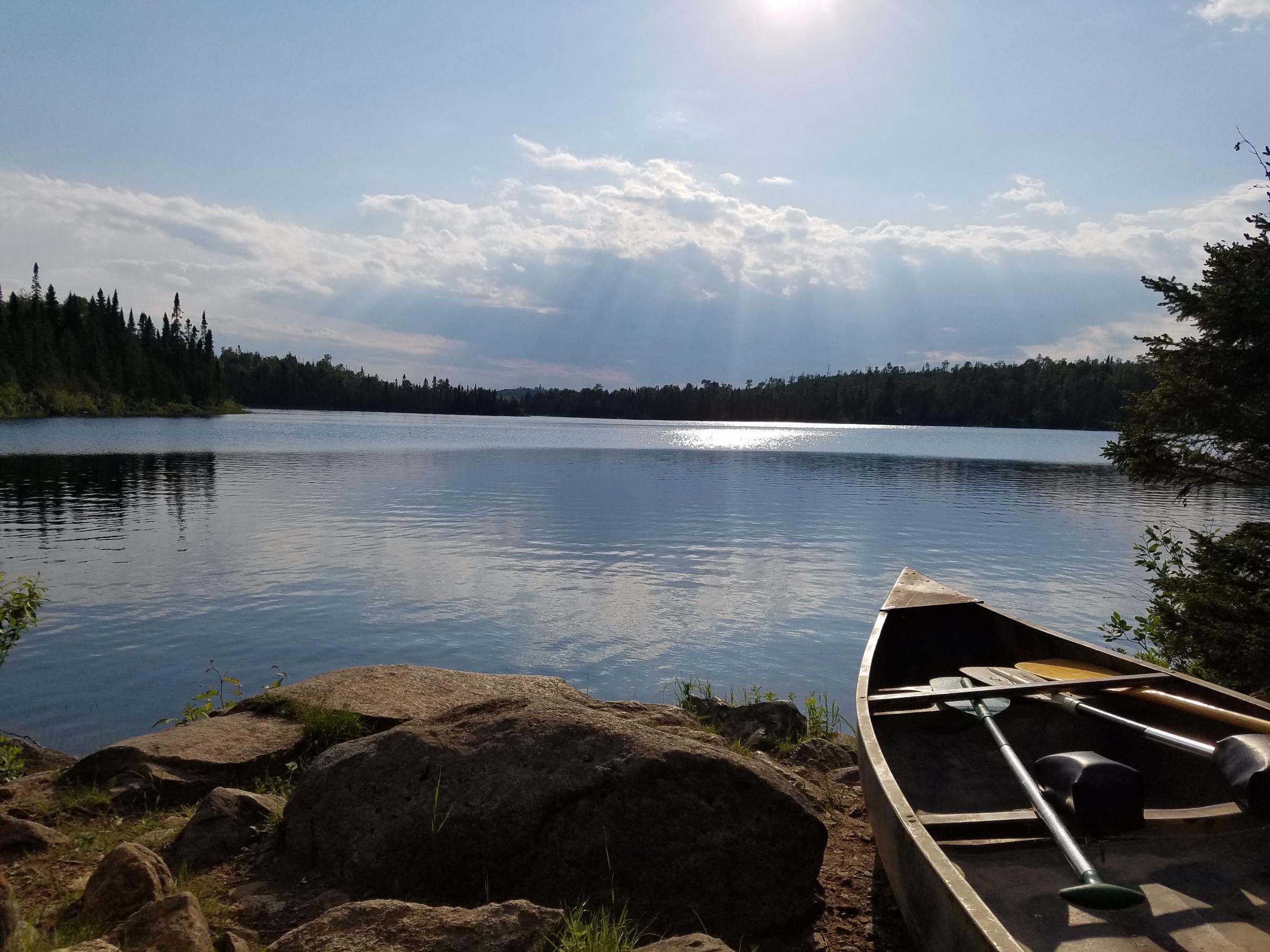 Brant was nice, pretty cliffs and lots of boulders. One side of the lake was burned, the other not so the contrast was interesting. We made a wrong turn down the bay to the south west and didn't figure it out until we got to the end. The portage from Brant to Gotter sucked though. It was steep up and down and very rocky. I had to stop for a bit to rest while carrying the canoe (about 60lbs aluminum) before we did the downhill portion because we were double portaging and I didn't like the look of it the first time. 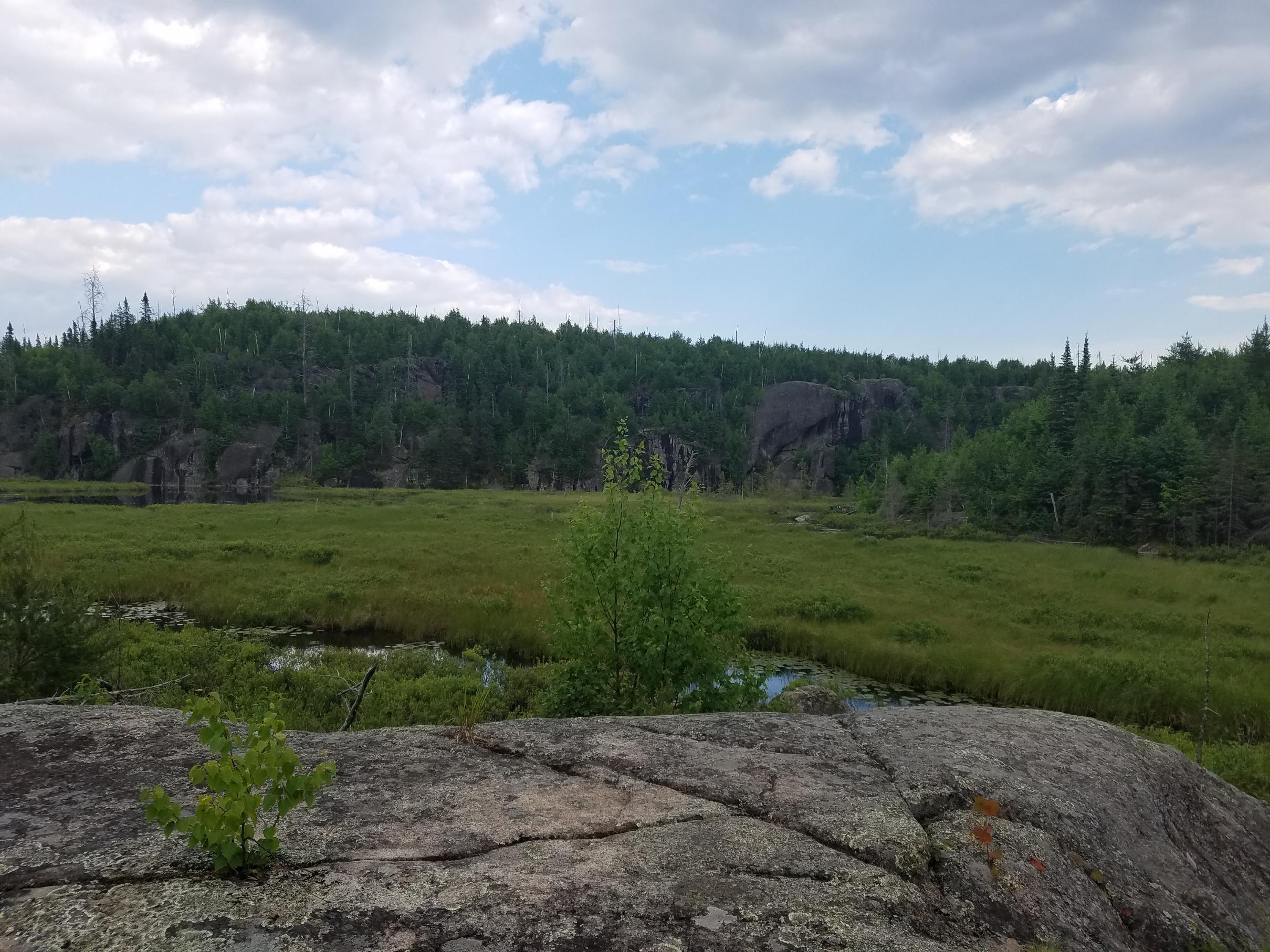 Gotter was a half marsh lake. We almost missed the turn and headed towards Crag but I learned to trust my gut after the wrong turn on Brant. The water was high so we bypassed the first landing and didn't have to go far.

Flying was another quick paddle but the lake went further and looked nice with cliffs and a lot of exposed rock. The Flying to Green portage was another rough one. Only about 80 rods, similar to the Brant to Gotter portage, but this one had a lot of vertical again and was our 6th portage of the day. It was getting into the evening by this point and we were worried about getting to our campsite. We were low on water too because we didn't want to fill our bottles in swampy water. Adam is tough though and not nearly as exhausted as I was. The first day is always rougher for me because I only do this once a year, but he makes this look easy.

Green was another nice lake. Finally we stopped to pump some water, and we needed it. On the far end of the lake there were a pair of loons that let us get really close, maybe 15 feet. They seemed as curious of us as we were of them. After they left we continued on through the marshy area to find the portage to Bat.

Green to Bat portage was not bad but we were tired and it was around 7:30-8PM so I remember it not being fun, but we also didn't take it in at all either. Bat lake itself looked like a nice lake and if we weren't the one 20 rod portage from our destination then we would have stayed there., but we were eager to push on and found the portage to Gillis.

The portage was downhill and harder on our tired bodies (or at least mine, I need to get in shape) than it should have been, but with that done we hurried to the campsite. Gillis is a big lake. It felt even bigger when you are tired, hungry and worried that the sun is going to set on you. We made it all the way across the lake to the 5 star site on the southeastern shore just to find out that it is taken. The disappointment. So we turned around and headed north towards the bay to the west of the portage where we entered. There were 2 4 star sites on either side of the bay that I remembered seeing so we went for the closest one. Being empty we took it and set up the tent, gravity filter, and bear rope before the sun completely set on us. I think it was around 9:00 when we got to the site.

We got a fire going with the wood left there, thank you to whoever had it all ready to go, and threw the T-bone on the grate after we got it good and hot to sanitize it. We split the (22oz) T-bone and had frozen green beans and instant potatoes as sides and boxed wine to go with it. The green beans had thawed on the way in but everything was cold. It was the best meal I have ever had and we grilled it in the dark. 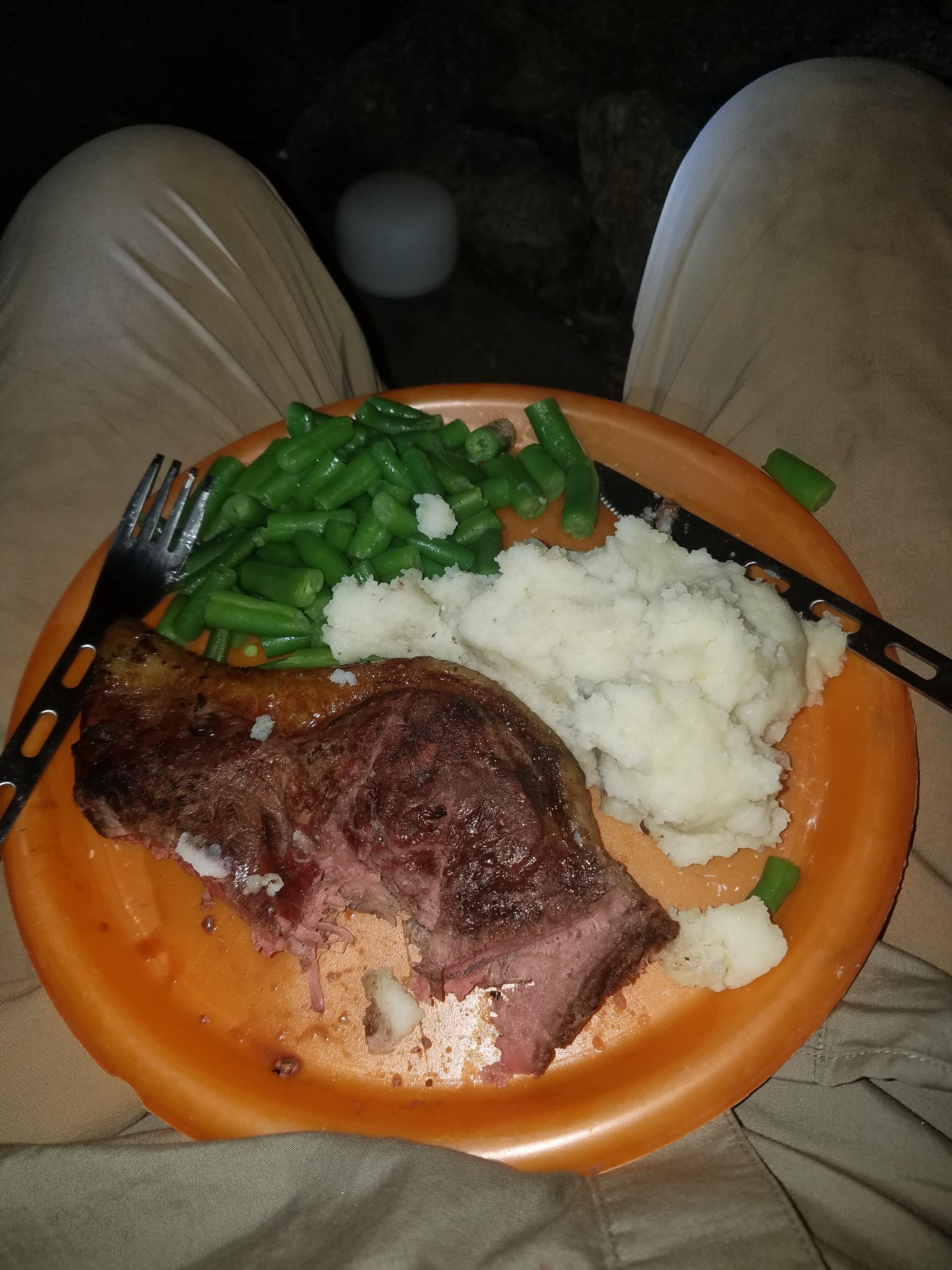 After eating we hung the food bag and finished our cups of wine while looking at the moon and stars.