Trip Type: Paddling Canoe
Entry Date: 07/15/2018
Entry & Exit Point: Moose/Portage River (north) (EP 16)
Number of Days: 8
Group Size: 9
Trip Introduction:
Day 00 Friday 7/13/2018 Today was my wife’s birthday (she was born on a Friday the 13th, and 13 was always my number when I played soccer, so we take our Friday the 13th’s as good luck!) and we work up, said bye to our kids, and got on the road at 7:20am EST from Indianapolis Indiana. We bypassed Chicago taking 74 to 39 and up. We stopped for an awesome birthday lunch at Subway in Wisconsin and continued to Ely. We made it to our outfitters Canoe Country Outfitters (CC0) by 6:30 CST making good time. We were supposed to stay in one of their little rooms for the night and stay in a rental house the next day when the rest of our group arrived. But CCO with the awesome customer service they always show us, put us in the big rental house our first night since no one else reserved it. We went to the Boathouse Brew Pub for a birthday dinner, tasty food but we really enjoyed the beer. I had an IPA and my wife was excited that they had a brown beer this time of year, and she really enjoyed it, good birthday luck. Day 0 Saturday 7/14/2018 Tara and I woke up and walked down the street to Front Porch Tea Co. to get a little coffee and hot chocolate as we watched the little sleepy town of Ely wake up. This year we decided to go up an extra day early instead of driving up the day before we went out, and we really liked being able to relax and take our time getting packed up and enjoy Ely a bit more. The rest of our group drove through the night and arrived at the outfitter in Ely around 9:30 in the morning. This was our second family trip to BWCA. The group of nine consisted of Myself, my wife (Tara), my mother-in-law (Julie), three brothers in laws (Matt, Travis, Trent), one sister in law (Danika), and one nephew (Ben 9), and niece (Lucy 7). All but Lucy had went on our BWCA trip two years prior. After the last trip and the family meltdown on day 3 we were more prepared this year assigning camp chores, pre-determining who was carrying what for portaging, and how we were going to portage. We were confident we would do much better this year. This year we also decided to pack in all of our own food for the first time as well. So we went to Zups to buy our steaks fir the first night and they were awesome. The lady vacuum sealed, wrapped, and labeled our steaks for us. We took them back to the rental house to put in the freezer. We got our gear packs from the outfitter and started packing. We headed to lunch at around 12:30 at the Rockwood bar and grill. The food was good, but the service was awful. The waitress brock a glass over my sister-in-laws back and got her all wet. The manager came out to help clean up the mess and offered a towel. We waited and waited for our food, like I said it was good but it was after 2pm when we got out of the restaurant for lunch, and it wasn’t that busy. I was shocked when we got the bill, the waitress nor manager offered to comp my sister in laws meal, give her a dessert, nothing. She ate lunch we a wet back at full price. Won’t be returning there. We walked around town visited the shops, got some shirts and gifts. Stopped at the bait shop for a lb of leeches. And headed back to finish packing. We were taking 3 canoes (2 three man, and 1 two man). CCO loaded the canoes onto a trailer for us to take in the morning as we planned to head out by 5:30am. We had two gear packs about 36lb a piece, 2 food packs 55lb and 60lb, 5 personal packs, 3 day packs, and fishing poles. Once we finished packing we headed to DQ for a little light dinner and dessert for the night. Then to bed.
Discuss Trip: View Discussion Thread (7 messages)
Day 1 of 8
Sunday, July 15, 2018 “Going the Distance” EP16 to Boulder Bay

The group woke up at 5am and left the house by 5:47am, not too bad. We loaded up the van and headed up the Echo Trail and arrived at the Moose River North portage EP16 at 6:45am. As Matt and I unloaded the canoes and put on our seat backs and shoulder pads on the yokes, everyone started portaging gear. Not soon after we go the canoes unloaded another outfitter dropped off about 3-4 other groups at the entry point at the same time probably 8-10 canoes. My first thought was is this a Boy Scout Troop, do they know you can’t have more than 4 canoe’s at a portage point at one time. I would be so upset if I went through an outfitter and they dropped us off with 4 other groups to the same entry point to all fight each other on the trail and on the tiny river we were entering on, I won’t be going with any other outfitter other than CCO if going out of Ely. But we had a head start. The portage trail was full, but we finished our double portage, said a quick family prayer, and got on the water at 7:30am. We had one canoe who we passed us and they quickly single portaged and got out of our way at the first portage. We were able to basically send 2 people back to finish double portaging while the rest of the group loaded up the canoes and got moving. We were doing sooo much better at portaging than we did on our last trip. We made good time getting to Agnes, we decided to take the single 115rd portage to the south with a goal of getting a site in boulder bay or tiger bay. The 115rd portage was pretty easy until the end, as the outfitter told us the water was the highest they had seen it in July in a long time. I already knew the end of that portage was muddy but now it was under water. Everyone had to sludge through the mud to get in the canoe, but that’s all part of the experience. We got out lunch (trail mix, beef sticks, and fruit bar) and ate it as we paddled down the boulder river. The wind wasn’t too bad as we paddled up the boulder river into boulder bay. It’s a really beautiful paddle. I began trolling a F-18 black and silver once we got into boulder bay. We passed the first two campsites as they looked good but we wanted to push as far as we could and it was still relatively early. Right before we got to the 3rd campsite in boulder bay (furthest north) I caught the first fish of the trip. A nice eater walleye. As we stopped to net and land the fish we ended up in front of a rope swing that someone made. Though we would never make a rope swing in BWCA, my brother in law Trent really wanted to do the rope swing, so we let him go do it. Then noticed the campsite nearby. It was 1:11pm and we just caught a walleye and found a rope swing so we decided to check out the campsite. It was a really nice campsite with lots of tent pads and lots of trees for hammocks, so we set up camp. After getting set up some decided to go swimming at the rope swing. Matt was the next to try to rope swing, and on his first swing the rope snapped. He went splashing into the water. That was the end of that, we took down the rope swing, Leave No Trace!! We did a little more fishing in boulder bay. My niece Lucy caught her first walleye! Managed to catch a couple of small walleye and a nice 2.5-3lb SMB all on crawler harnesses with leaches, using 3/4oz bottom bouncers. We went to pull out the steaks for dinner, and they were frozen solid. I guess next time we will plan to do steak on day 2. So we moved meals around and had Patriot Pantry’s Traveler’s Stew 12 servings for the 9 of us. It was the perfect amount of stew with one nice eater walleye pan fried to share. We had Patriot Pantry 5 servings of chocolate pudding for dessert. Someone carried in some M&Ms as well, so we mixed in M&Ms with the pudding and it was really good. We decided that we could have done a little more pudding. We also roasted marshmallows later that evening. But everyone had plenty to eat and we all enjoyed the meal. The kids fished from shore with leeches catching a few little SMB. And Ben was casting a F-13 black and silver and caught a number of small walleye and SMB from shore. After dinner, we went out to do a little more fishing as the sun was setting. My wife and I went and through top waters and spinners looking for the SMB but had no luck. The other canoe went trolling raps and had no luck as well. Tara and I switched tactics and started trolling raps on the way back and Tara landed a 17” walleye on a Gold and Black HJ14. Travis and his wife Danika and brother Trent were in one tent. Matt and his two kids Ben and Lucy were in the other tent, so yes, I slept in a tent with my wife and mother-in-law for 7 nights. ~Nina Moose Lake, Agnes, Lake, Lac La Croix 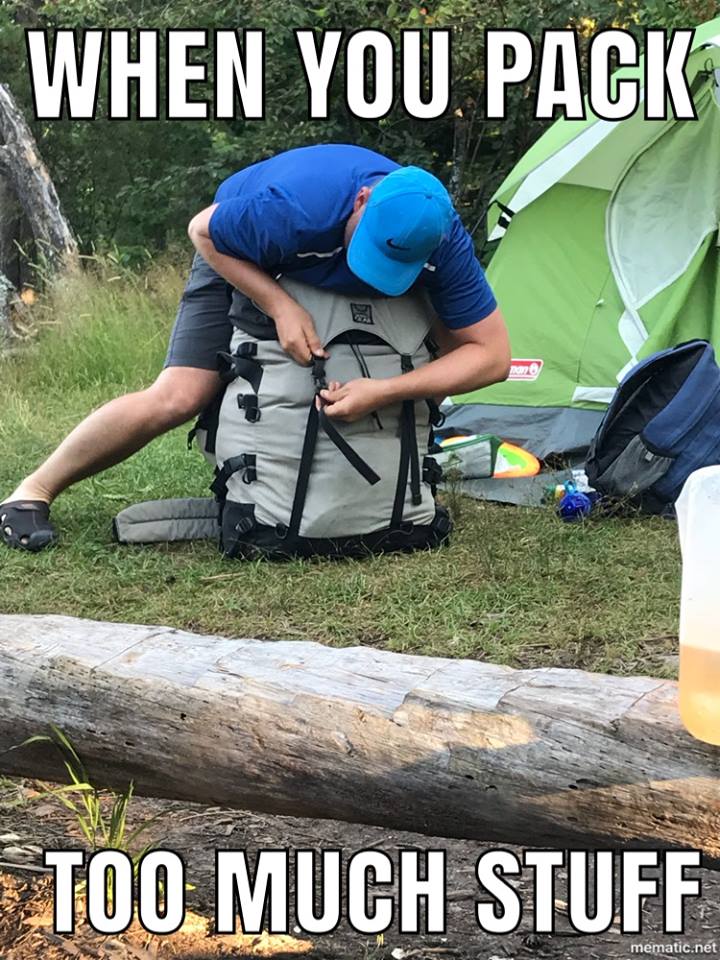