Trip Type: Paddling Canoe
Entry Date: 07/28/2018
Entry & Exit Point: Little Indian Sioux River (north) (EP 14)
Number of Days: 4
Group Size: 2
Trip Introduction:
Some of you may have seen my post in the Trip Planning Forum a few weeks back asking for advice on 'How to Make my Wife Love BWCA'. I received a ton of great feedback, and I used many of the recommended items and ideas. Take a look at the last day of the trip report for some of my thoughts on the ideas/items that were recommended to me by you people! This trip was my wife's second ever trip to the BWCA. I picked the Little Indian Sioux River as an entry point as my wife likes to explore Ely, and this was also the weekend of the Blueberry Festival.
Discuss Trip: View Discussion Thread (8 messages)
Day 1 of 4
Saturday, July 28, 2018

We awoke around 5:30am to begin heading up to Ely. We ended up staying the night at the Virginia Holiday Inn as everything is booked well in advance in Ely for the Blueberry Festival. We stopped and had a great breakfast at Brittons as we waited for the Kawishwi Ranger Station to open.

The weather was perfect this morning. No clouds to be seen, and a cool 55 degrees at 8am. We grabbed our permit around 8:30, and began driving up the Echo towards the Little Indian Sioux River North entry point. This is the furthest west I've ever entered the BWCA, and it seemed to be about an hour's drive from town to the entry. I'm usually overwhelmed with anticipation and excitement on my drive to the entry, but I was trying to make a point of slowing myself down and taking in the views on this trip. We ended up listening to music and taking a slow drive up the Echo. It truly was a beautiful morning.
We arrived at the entry point, and there were quite a few cars in the lot, but nobody was loading/unloading. At this point, I realized that the steak I had brought for night one was already nearly thawed. I made the executive decision to leave the steak behind as it would be pretty warm by dinner time. Maybe a stupid decision, but I loaded the steak into double ziplock bags, placed in a Tupperware container and left it in the car. Crossed my fingers that the smell wouldn't get through... We took our time organizing our gear and began heading down the short downhill portage to the river. We stopped for a quick photo session before saying goodbye to the car! 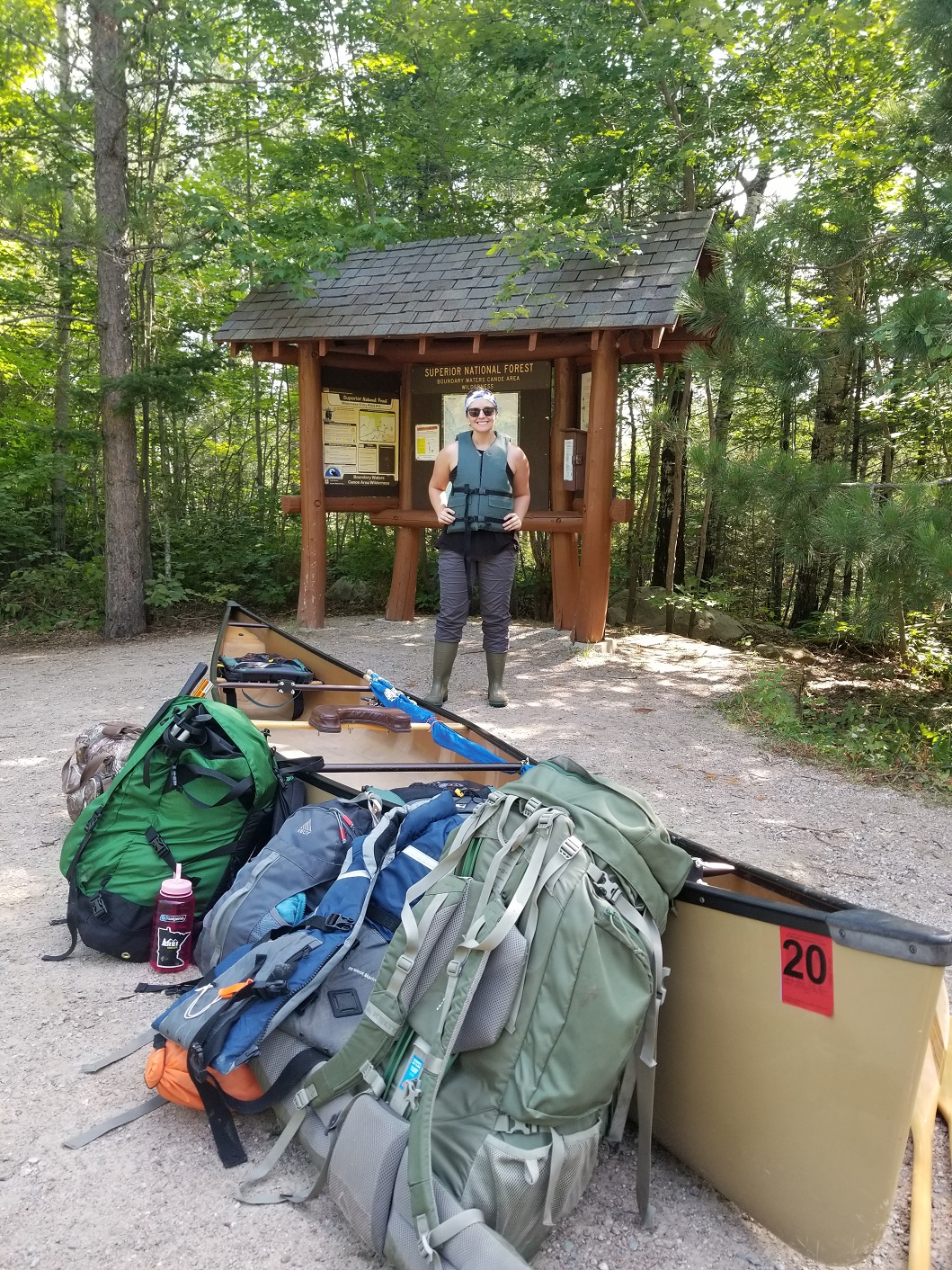 The put in was a bit tricky on the entry, and I typically wet-foot, but Maddy proved stable! We were quickly on the river. 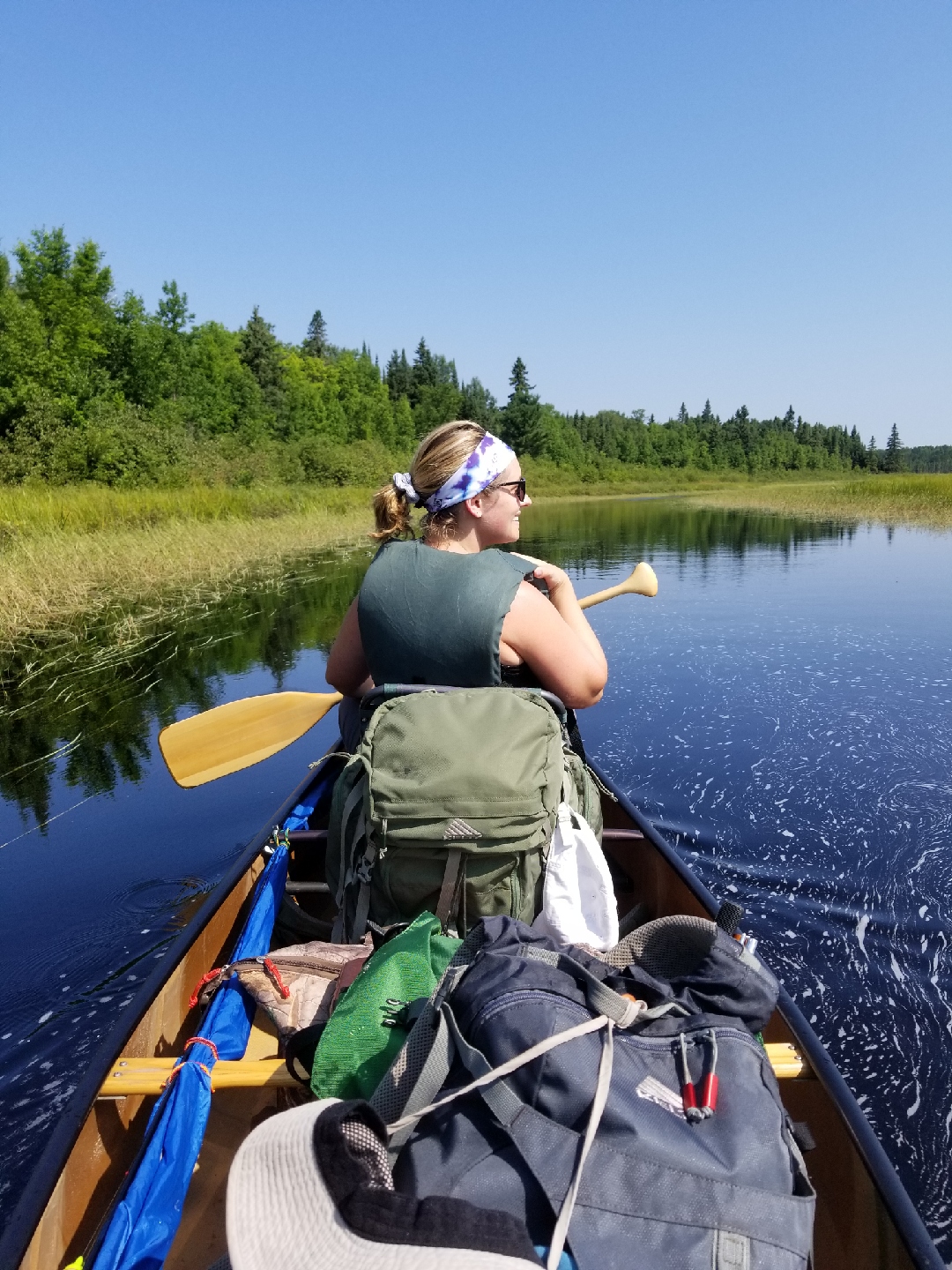 Little Indian Sioux River had a nice, gentle meander to its' nature. Maddy LOVED all the flowering Lilly-pads. I've taken a few buddies and family members to the BWCA, and most are apprehensive about finding portages/getting lost/accidentally running rapids etc., but Maddy seemed to be carefree. We approached our second portage and took some time to enjoy the waterfall. 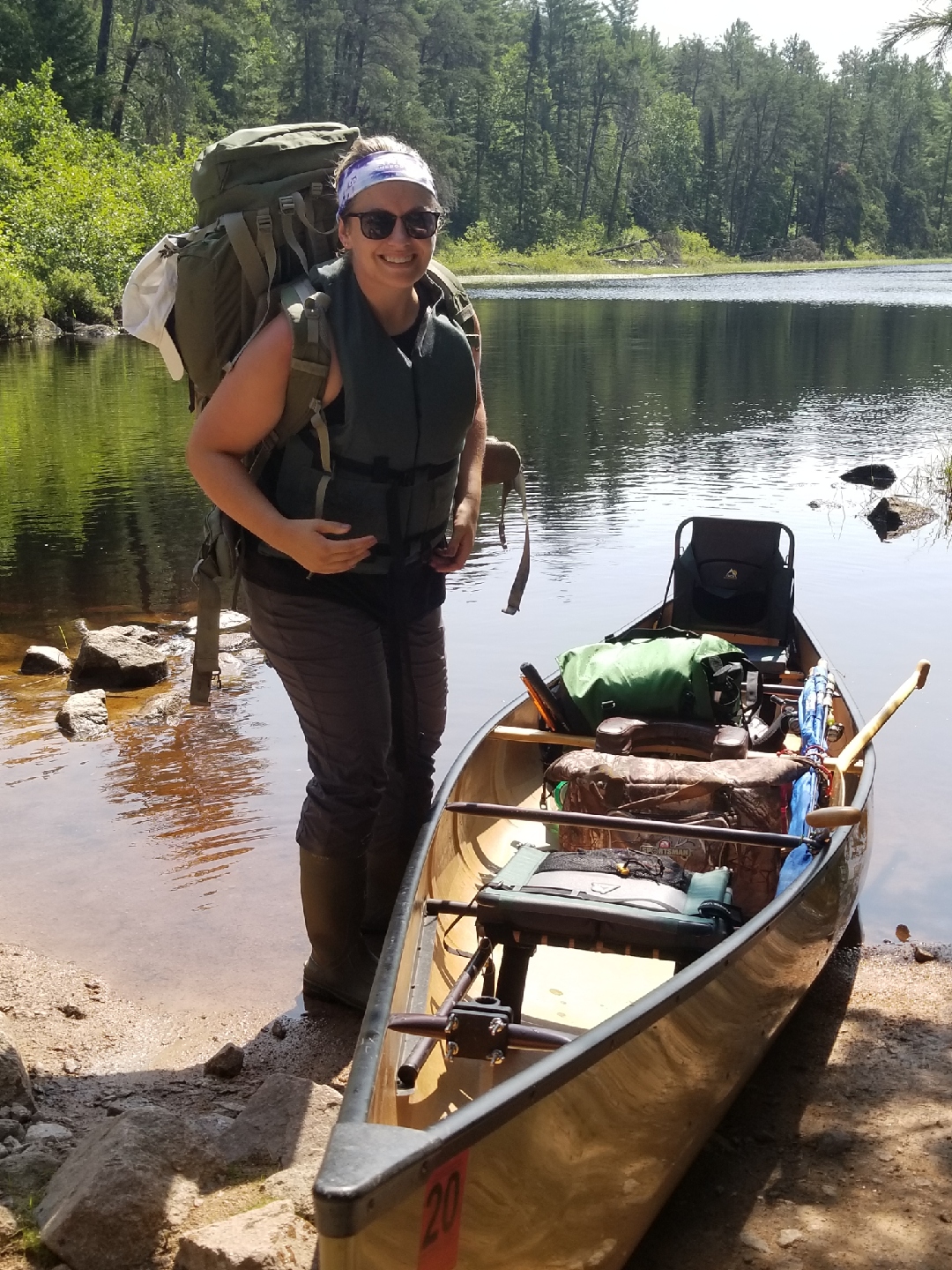 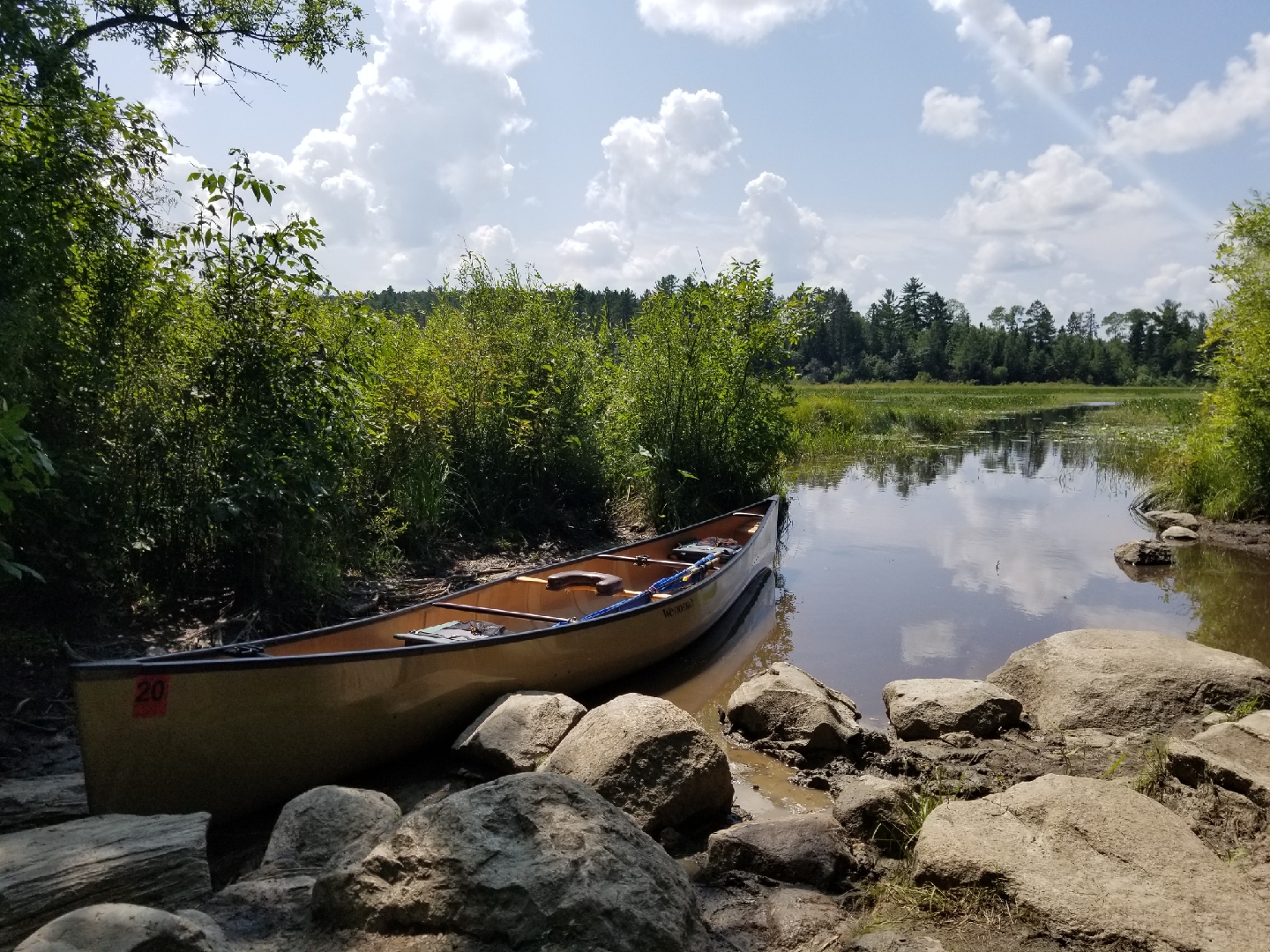 I elected to double-portage on the River as well as between Upper and Lower Pauness. This was my first experience double-portaging, and honestly, I don't know if I'll worry as much in the future about packing for single-portaging. I was able to enjoy the woods and the company much more on this trip than ever before. We stopped and chatted with a group from Kansas City that camped on Lower Pauness. They were on their way out, but wanted to recommend a few sites to me. They seemed disappointed that they didn't make it to Shell; it seemed they had a late start on put-in day. We sat and enjoyed the falls on the Lower Pauness side of the portage and had a few snacks as the portage was clear. We watched a few canoes fishing on the lower falls.

Finding the portage from Lower Pauness to Shell took a bit more time as the wild rice was doing a good job of camouflaging the path from the lake, but after a few minutes we spotted the trail. We unloaded and took another water/snack break. This was going to be the longest portage of the trip, and I didn't want to push Maddy. She seemed quite up to the task and we started up the trail. I had completely forgotten about the beaver pond in the center of this portage, and we had a bit of an early false alarm when we arrived. I decided the beaver pond was a good spot to set our gear and head back for the other packs. Once we got back to the beaver pond with the rest of our gear, we decided to float the canoe across as water was about 3' deep in the middle. At this point, I could tell that Maddy was getting tired, and I decided camping on Shell was probably a good idea. We double-portaged from the beaver pond to Shell, and the time was approximately 3:00pm as we loaded the canoe to find a campsite on Shell.
We could see a few occupied campsites on the large island to the north, and a few canoes in the southern bay, so we figured the lake was going to be close to filled tonight. We stopped at the first campsite on the west side of the lake to take a quick potty break (site 47). Maddy seemed pretty tired, and we kinda fell in love with the site so we ended up unloading and making camp on site 47.
The site had a great gentle sloping rock ledge that surrounded the peninsula. I remember a few members had recommended finding a good swimming site, and Maddy mentioned she would like to go for a swim. There were also good trees for multiple hammocks, and a spot tucked away for a tent or two. This was a great site for us, as we have just one small tent, but I wouldn't recommend this site for a larger group.
We settled into our hammocks for an hour or so to relax and enjoy our site, then we started on dinner. Tonight I treated Maddy to shells and cheese per her request, and we had a few glasses of wine (another great idea from a fellow BWCA.com member). As the sun began setting, we made a fire and put our feet up for the remainder of the night. 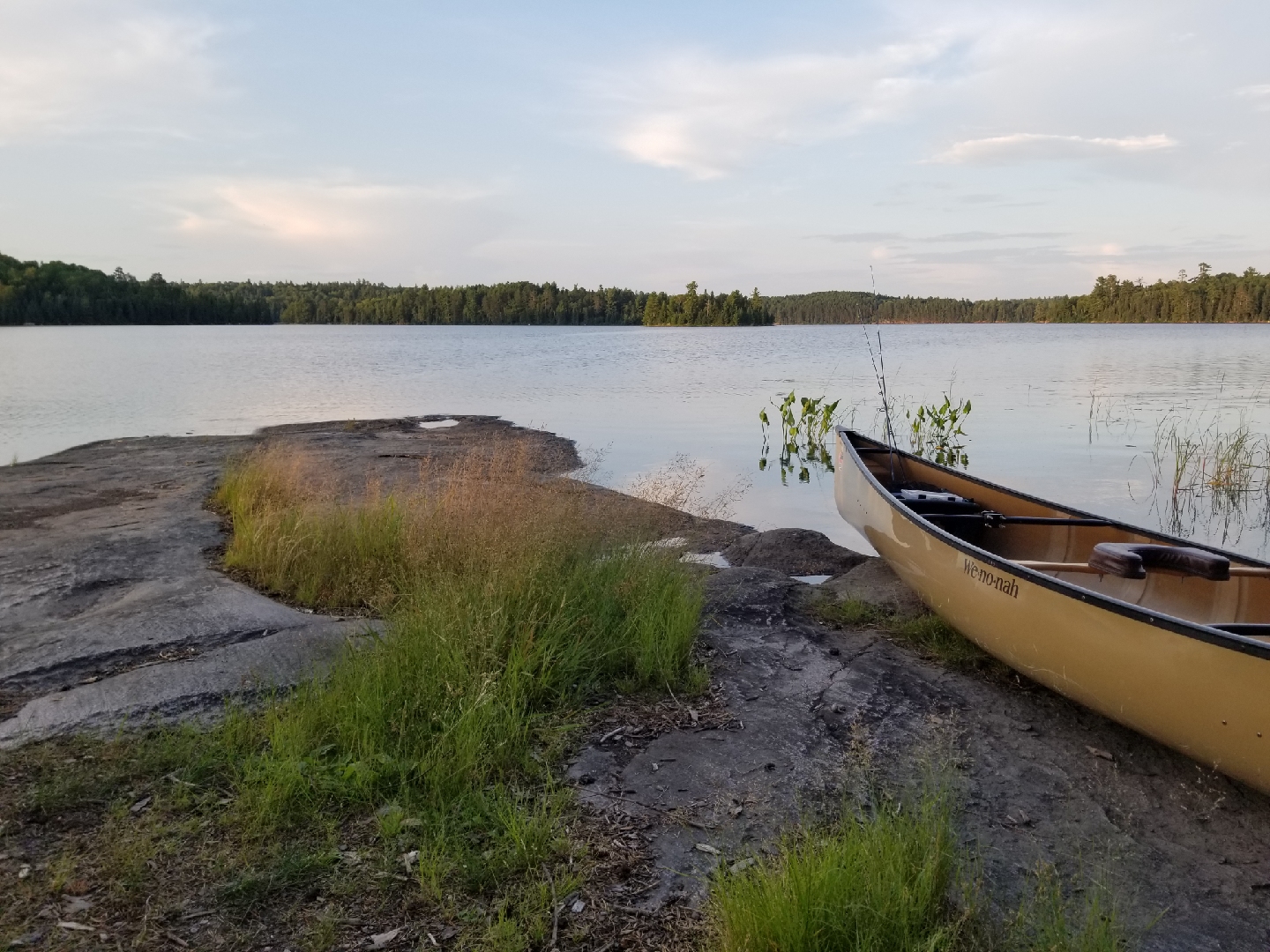 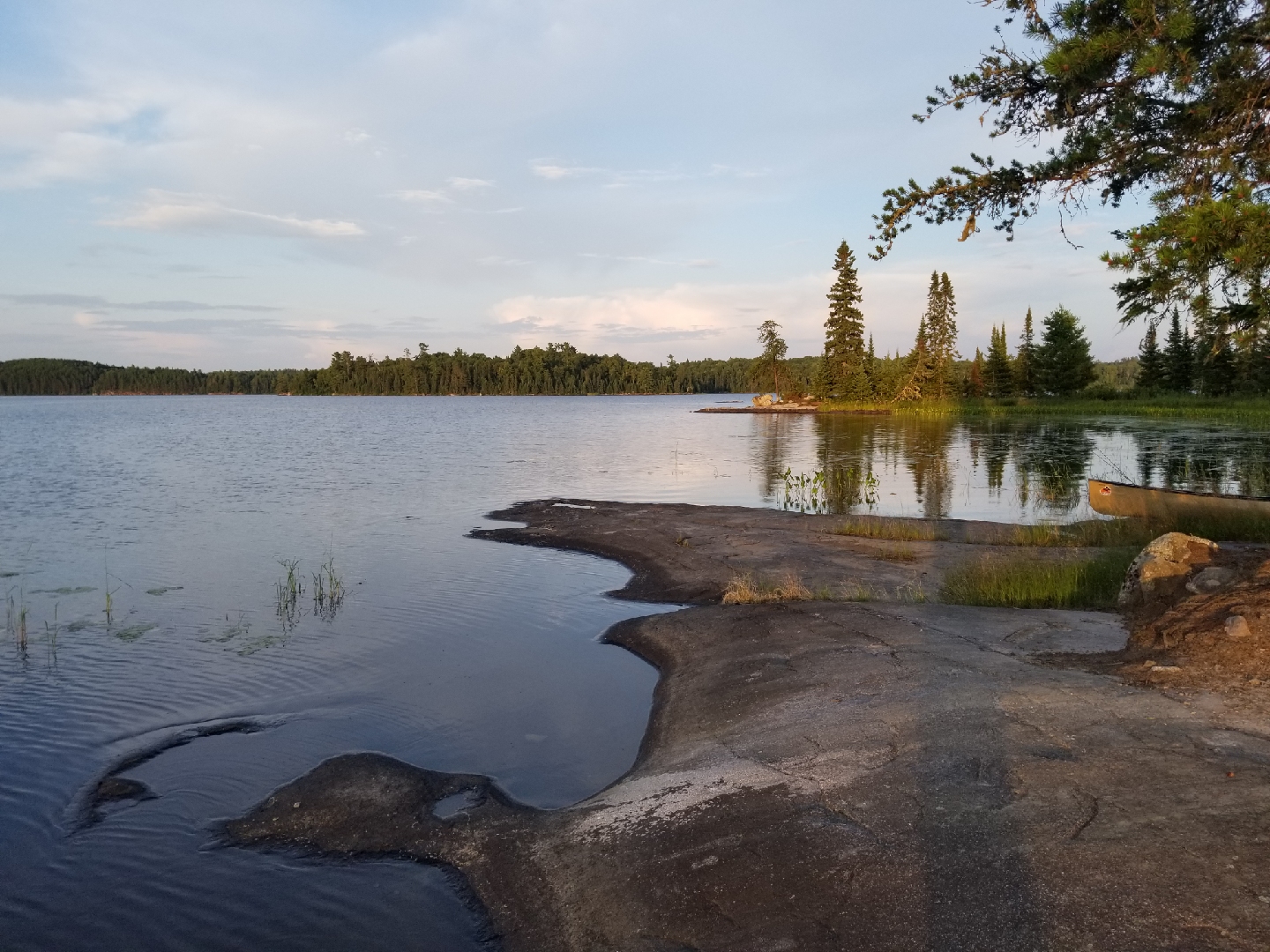 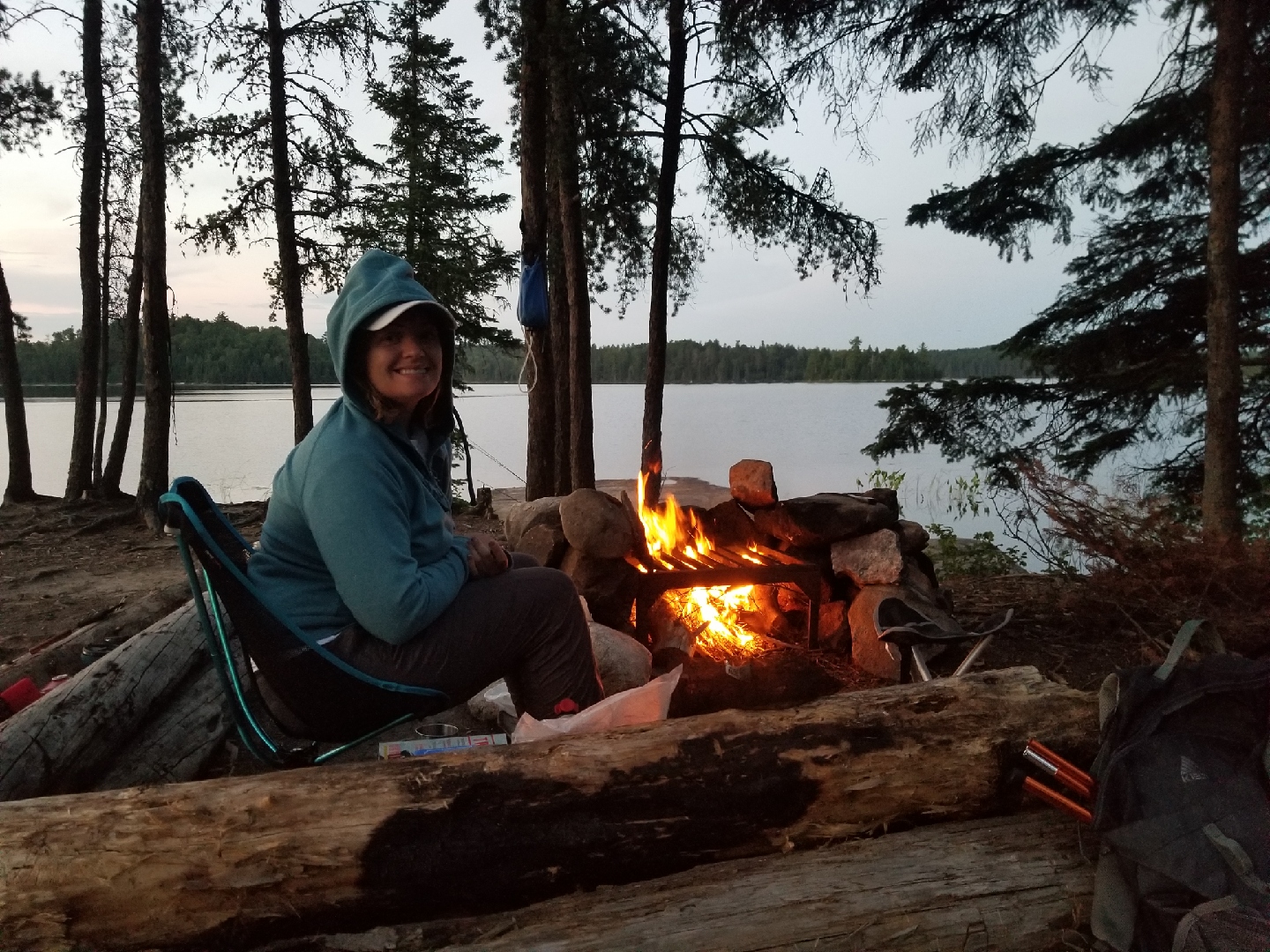