Trip Type: Paddling Canoe
Entry Date: 08/25/2018
Entry & Exit Point: Quetico
Number of Days: 10
Group Size: 2
Trip Introduction:
I was lucky enough to get an introduction to BWCAW and Quetico 40 years ago when I was asked to be an adult advisor for a Boy Scout crew from western North Carolina. The 1978 trip was through the BSA's Charles L Sommers Canoe Base on Moose Lake. In 1979 I returned with my wife, Tia, and while we couldn't make annual trips, we've tried to return every few years. Every visit to Canoe Country is preceded by a long drive; we live in the mountains of western North Carolina, so we spend a couple days each way to cover the 1250 mile commute. By the time we reach Ely, we're ready to paddle, so we've never taken advantage of tow services. We usually drive to Moose Lake's public landing and work our way into Quetico, although we've also done a fly-in trip and one trip out of Atikokan. On our first trip we used an aluminum canoe that weighed in at 70 pounds. Later trips had lighter gear, with a couple Old Town Columbias in the 60 pound range, then a Mad River in the 50 pound range, and more recently Wenonah and Northstar boats in the 42 pound category. It's not just the boat; paddles, stoves, tents, etc, are all on a steady weight reduction diet. It's really nice that gear manufacturers are accommodating our aging process! And for the first time, we're carrying an InReach satellite communication deviceour routes have some 'off the beaten path' segments, so it's a bit of insurance. Paddlers visit Canoe Country for many reasons. Tia and I go for personal challenge, solitude, and to cover distancewe'd planned to cover ~120 miles this trip, and to revisit a couple places that intimidated us a few years back. Our entry lake was Kahshahpiwi, and we hoped to find the pictographs off Montgomery Lake, then move through the poets' chain and on to Delahey to see if we still had what it takes for the Death March portages...
Discuss Trip: View Discussion Thread (24 messages)
Day 1 of 10
Saturday, August 25, 2018: Moose, Newfound, Sucker, Inlet Bay, Bailey Bay, Burke, North Bay. 17.5 miles, 4 portages, and 1 beaver dam

In addition to the lightweight Northwind 17, we're using carbon fiber paddles, and by Newfound Lake we were already hooked—suspect they'll be on the Christmas list. Every Quetico first day starts with a big breakfast at Britton's Cafe, then the drive to Moose Lake. The sky was full of low clouds when we unloaded gear from the Outback and moved to the boat and our portage packs to the lake. We were on the water at 8:30 in a very comfortable 68 degrees, with no other canoes in sight. Checked in at Prairie Portage just over two hours later—the lighter paddles don't make us faster, but our shoulders sure feel the difference. The outfitter had told us to expect to enter Quetico under a fire ban, but at Prairie Portage we also learned that parts of our proposed route were closed to paddlers, and that the poets' chain was open for passage, but not for camping, so we revised our route.

We stopped for lunch on Sunday Island, and were surprised by the level of storm damage there. We also surprised a couple bald eagles arguing over a fish carcass. From Bailey Bay we portaged into Burke via Boulevard Portage, then hit the two portages (and a beaver dam) into North Bay. We single-walk all portages, and passed a couple other groups by the time we made North Bay. We were pleased to find North Bay's surface almost glass—we've hit the bay when it was white-capping. We found a nice campsite on an island near tomorrow's portage. Didn't realize how tired we were until after dinner when we hit the tent for reading, and both fell asleep. Not sore, though, which I credit to the lighter paddles. 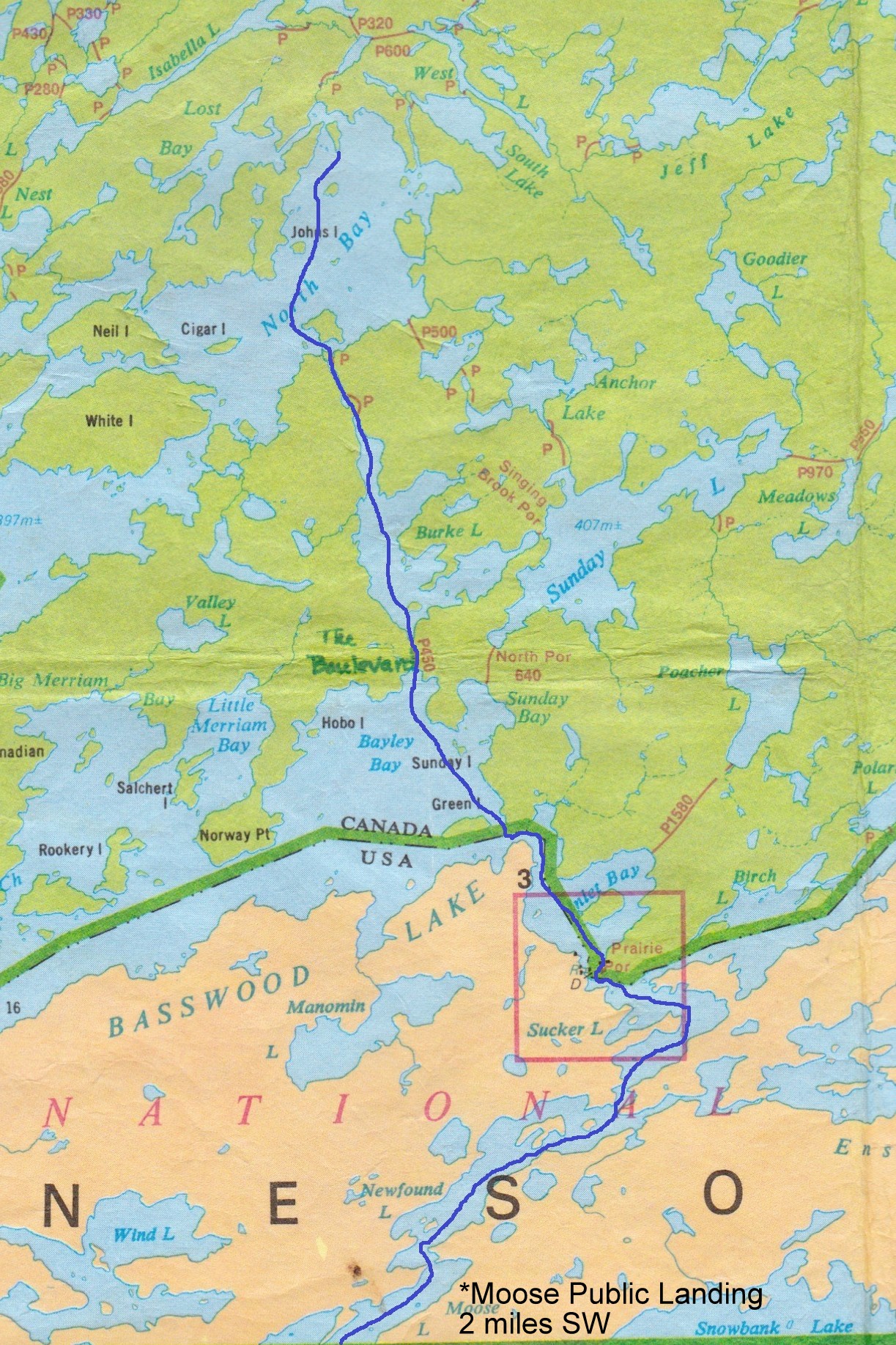 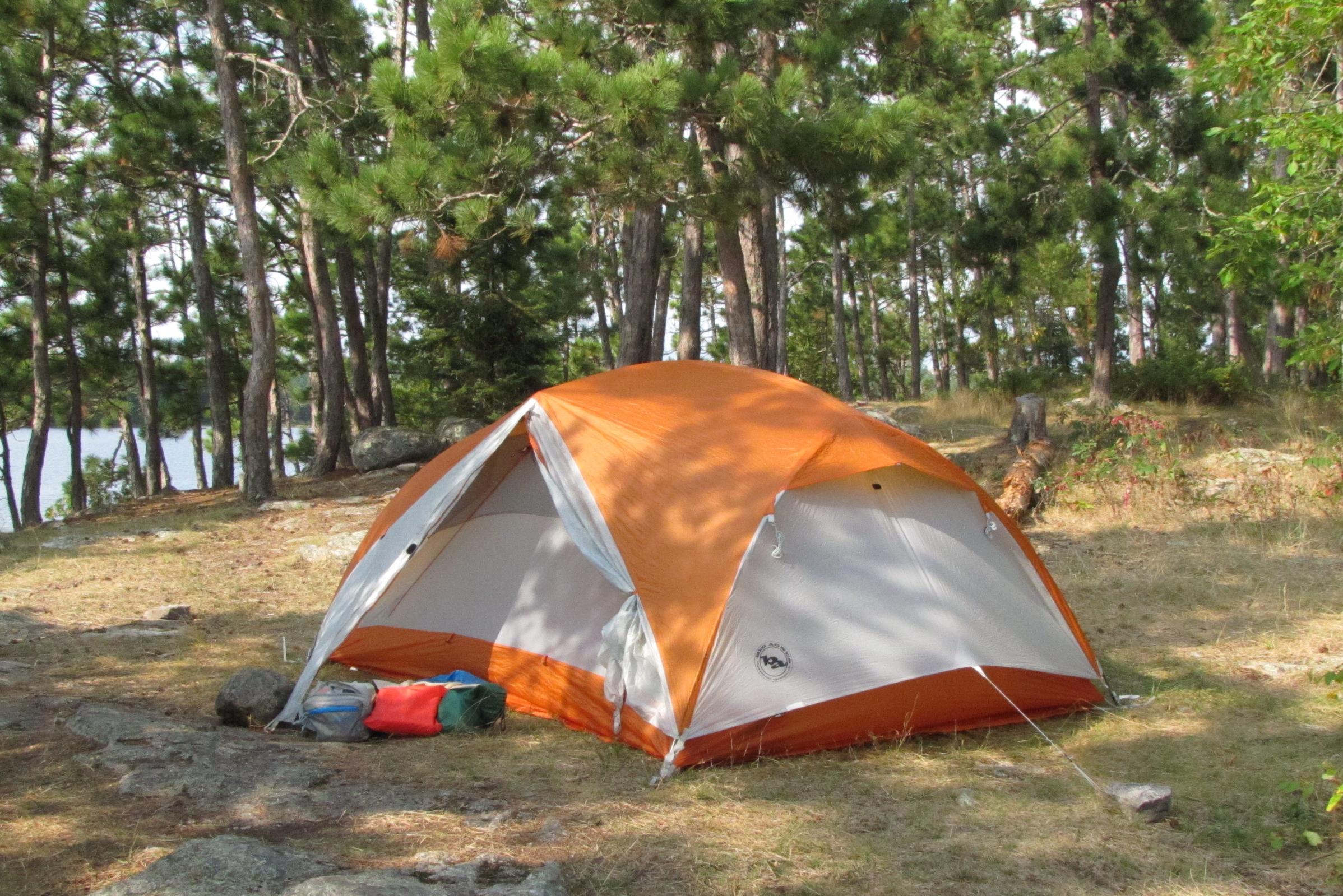 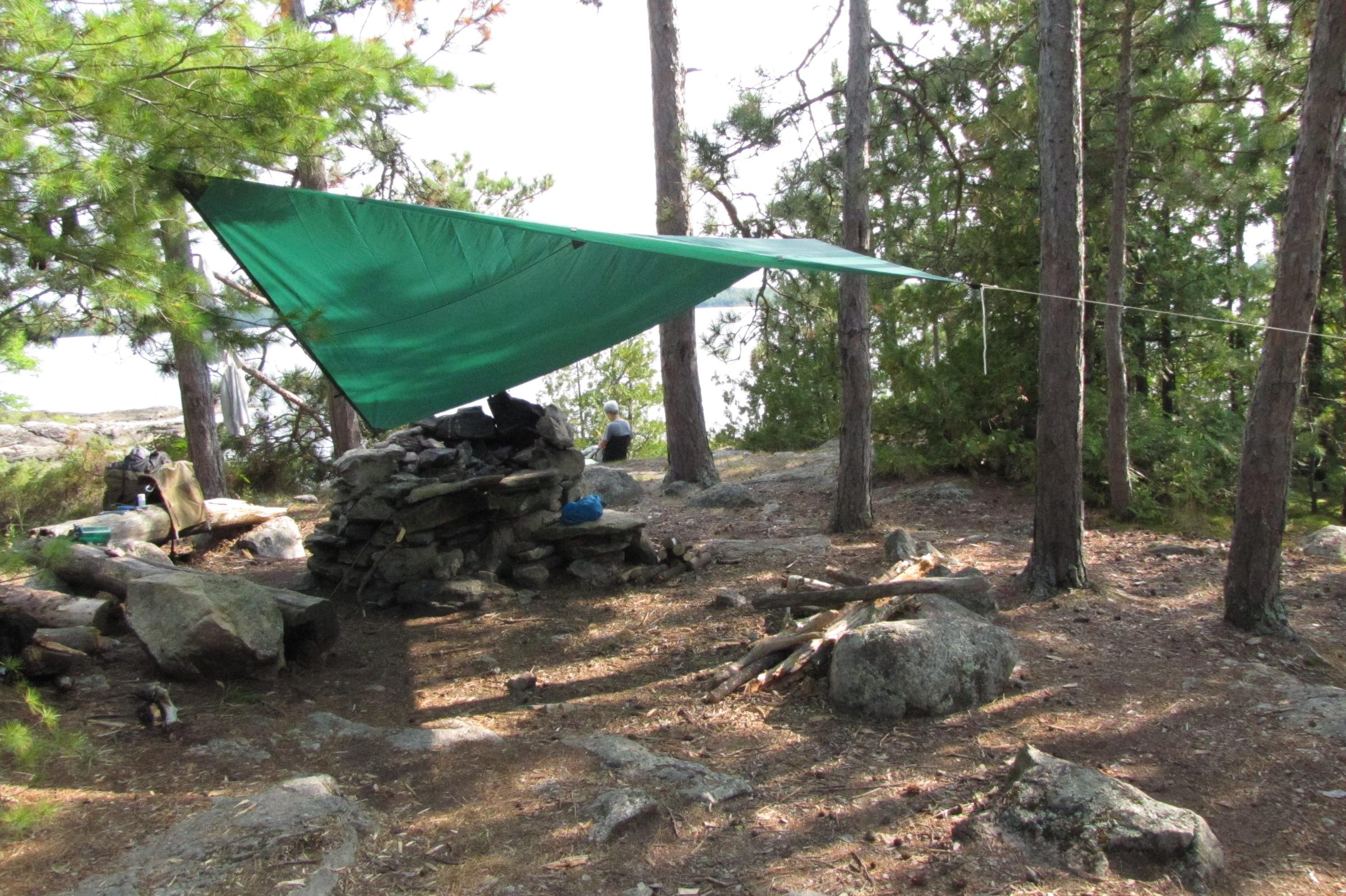 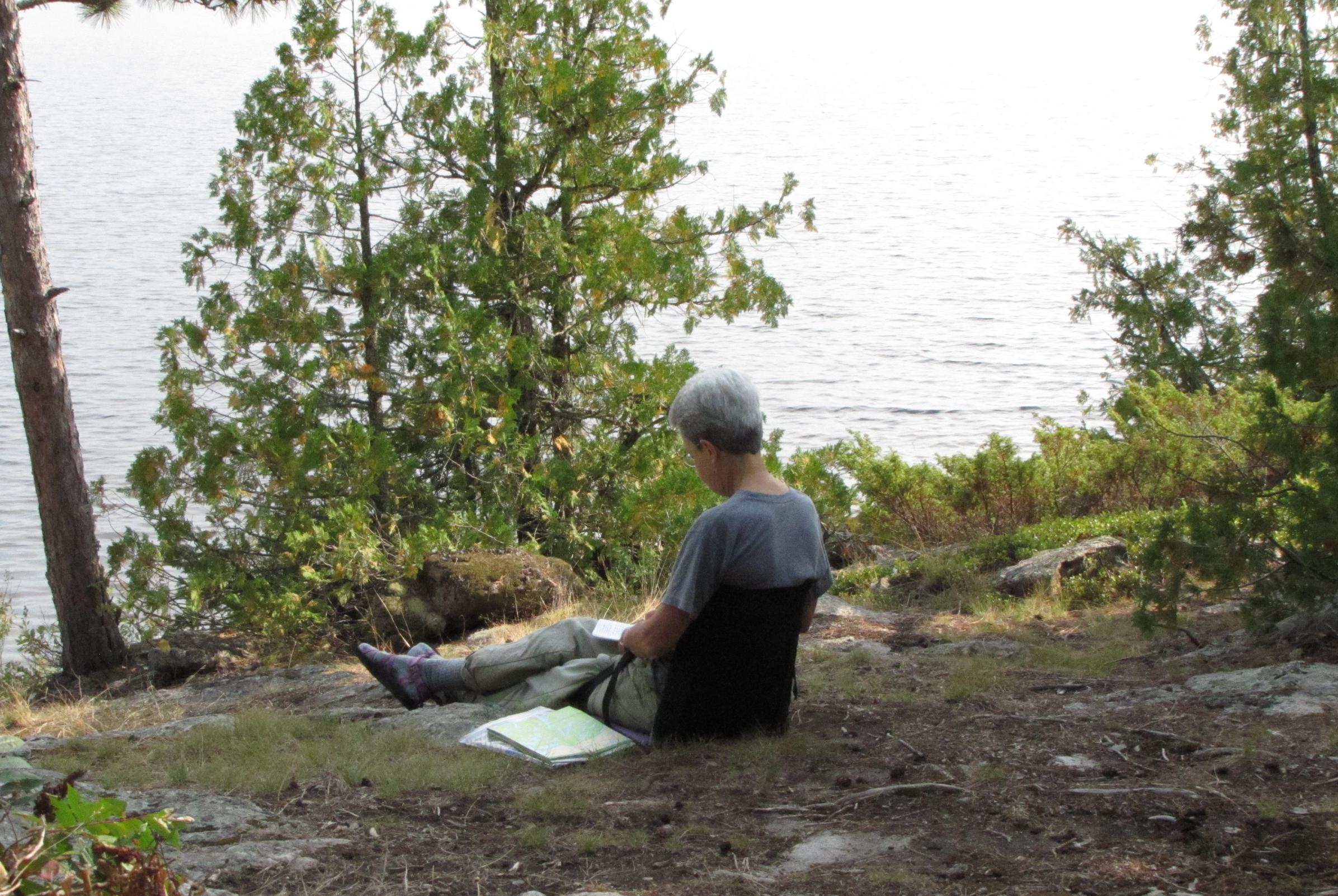 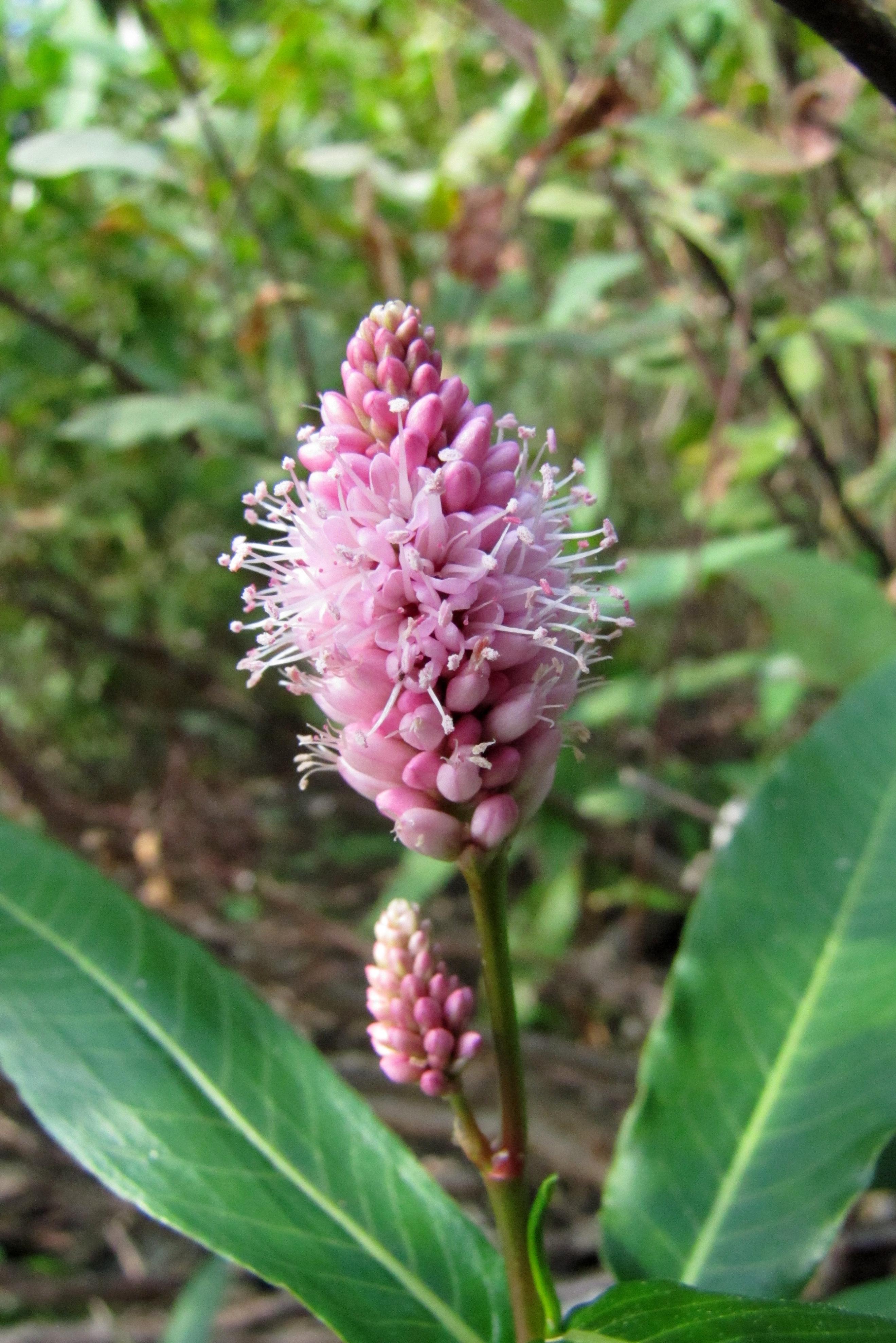