Trip Type: Paddling Canoe
Entry Date: 06/12/2018
Entry & Exit Point: Cross Bay Lake (EP 50)
Number of Days: 10
Group Size: 1
Trip Introduction:
This was set up to be a 10-12 day solo trip with my dog Regent, entering at Cross Bay, heading down the Frost River, then back up north for some more trout before exiting at Round Lake. In hind site this was a good trip, but much of the time not an easy one. Some tough weather, dreadful mosquitoes, gear and human failures made this the type of trip where I seemed to always be asking myself “really, what else could go wrong?” Yet it ended on a high note, so me and my dog Regent will chalk this one up as a success.
Discuss Trip: View Discussion Thread (15 messages)
Day 1 of 10
Tuesday, June 12, 2018

I woke up in the bunk house of Hungry Jack Outfitters with my gear still in need of sorting, and knowing that before I could proceed to the entry point I would unfortunately have to drive back down to Grand Marais so I could take care of some personal business online. I had foolishly left home without getting it done, thinking I’d just take care of it that evening at the bunk house. I should have known better; that the Internet had not reached that far up the trail. Oh well. I could have gone on, but the unfinished stuff would have nagged me the whole trip, so I bit the bullet end backtracked down to GM to the Java Moose for some coffee and wifi. A short thirty minutes and a long latte later my iPad was off and I was driving up the trail, again.

A mere two hours after I had started my car, I was back where I started the morning which was frustrating. In addition to running behind, the sunny sky I’d seen in GM had grown cloudy and then started to drizzle as I finally turned onto Tuscarora Road. Clearly I should have done the final sort of gear in GM instead of waiting to get to the entry point. I pulled in and parked, and flipped open my hatch to allow me to get the last gear items and food sorted. I found the drizzle wasn’t that bad...compared to the mosquitoes, that is. As I sort and swat, young couple pull in and start unloading. They are going on a quick weekend trip, and though I was almost ready I pulled my gear aside to let them more easily load up and get going. They head off, and I follow maybe 10 minutes later.

In just a few minutes I’m at the first portage and a bit surprised to see they still have another trip to make. There is also an extra backpack sitting at the portage - not mine and not theirs. There is clearly a mouse hole in it, and we both scratched out head about what to do - move it forward, take back to the entry, of just leave it. I go ahead and open up the pack for a clue. There’s snacks, a little cook gear, and a few things that look like day trip stuff, so I hoist it up into a small tree where it can be seen and hopefully at least delay the mice.

At the next portage I again caught up with the young couple. This portage had more room, so I landed and started the first of my two trips across. This was the last time in 10 days that I would share a portage with anyone.

On Ham Lake the young couple zigged around and I paddled straight across the lake and portaged alone over to Cross Bay Lake as light rain started falling again. It was a really beautiful area, and I paddled south past the first site on the right hoping the second would look more interesting. On my left I heard some rustling, and saw a moose cow and calf on a small hillside feeding on alder leaves. They didn’t wait as I fumbled to extract my camera, but seeing them was uplifting as these were the first moose I had seen in a very long time.

It was probably only 1 or 2 in the afternoon when I stopped at the next campsite on the left, a really beautiful site with a big boulder face, protected fire spot, several good tent spots, and a bit of open area for my dog to investigate. The drizzle had stopped but the mosquitoes had not, so as quickly as I could i got my tarp up near the fire grate, then quickly tied under it the bug net that I had just got done sewing a few days before. It was my first trip with a bug net, and in hind sight I think I would have gone home on day two or three without it. I can suffer through some bites and swatting, but can’t tolerate seeing my dog miserable. The bug net was a glorious sanctuary from the bugs.

A little breeze came up and broke off the rain and most of the mosquitoes for a while, so with camp set we explored the large rock face to the south of the site, and even took a few casts. Stepping down from some rocks toward the water I nearly stepped on a turtle who was laying her eggs. I quickly moved back up and away to leave her alone. An hour later I stopped back over to peak at the spot, and was very impressed at how nicely she had camouflaged her next. Saw one group of canoes paddle past and portage on to the next lake.

I got my GoPro out and started shooting a bit of video, but here on the first day I start getting “disk almost full” messages. How can this be? I had just deleted all the files on this card, or at least I thought I had. I sadly figured I’d likely have to limit my video if I wanted to get some throughout the trip. Between this, and the mosquitoes and rain keeping my DSLR tucked away, I would end up with limited video and photographic documentation of my trip. Still, I’ll post what I have.

Evening weather was looking nicer, but with the bugs coming back out I was happy to sit in my bug net and boil water on my stove for a boil in bag dinner. Lacking fire, I relied on a cup of wine to provide some atmosphere. 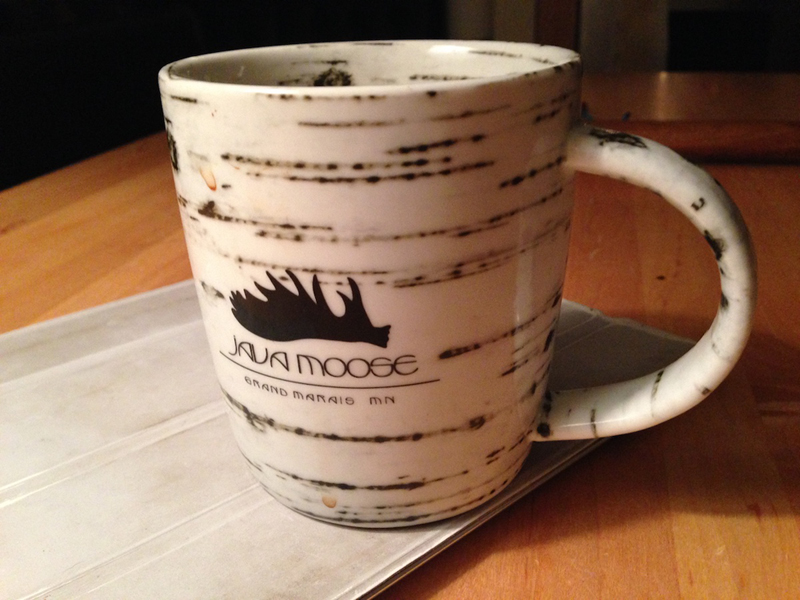 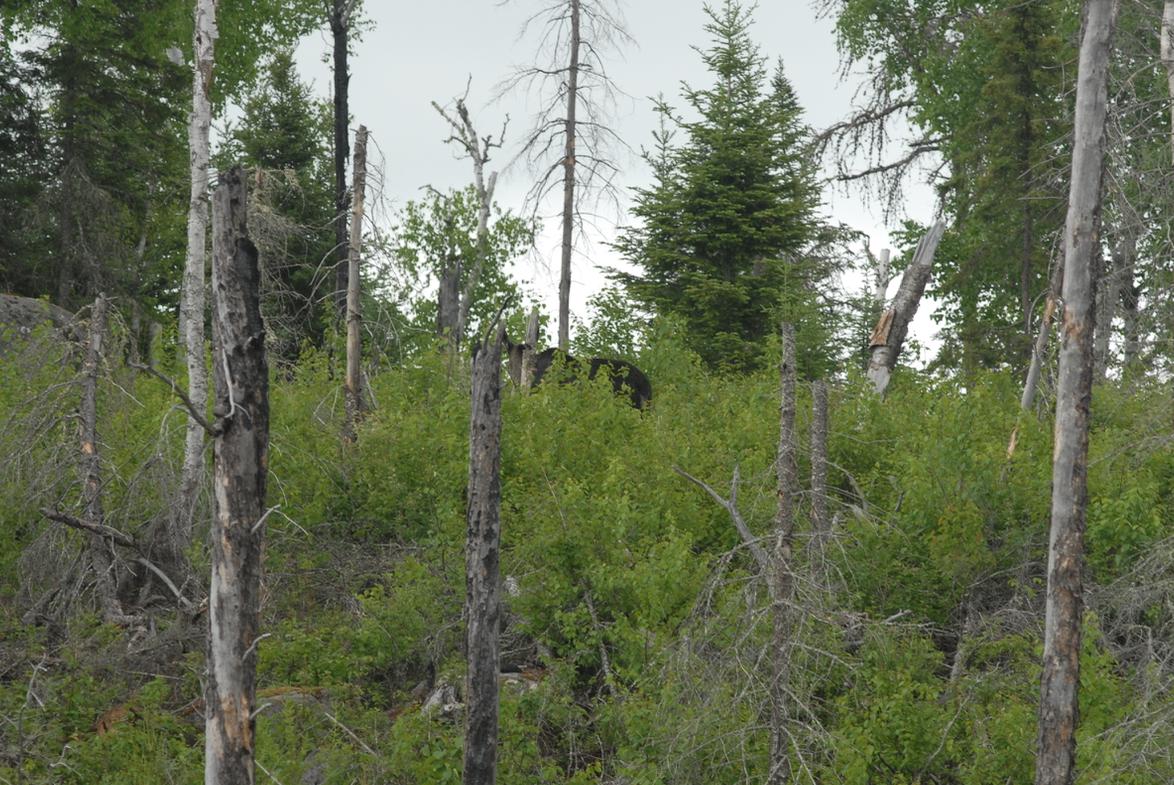 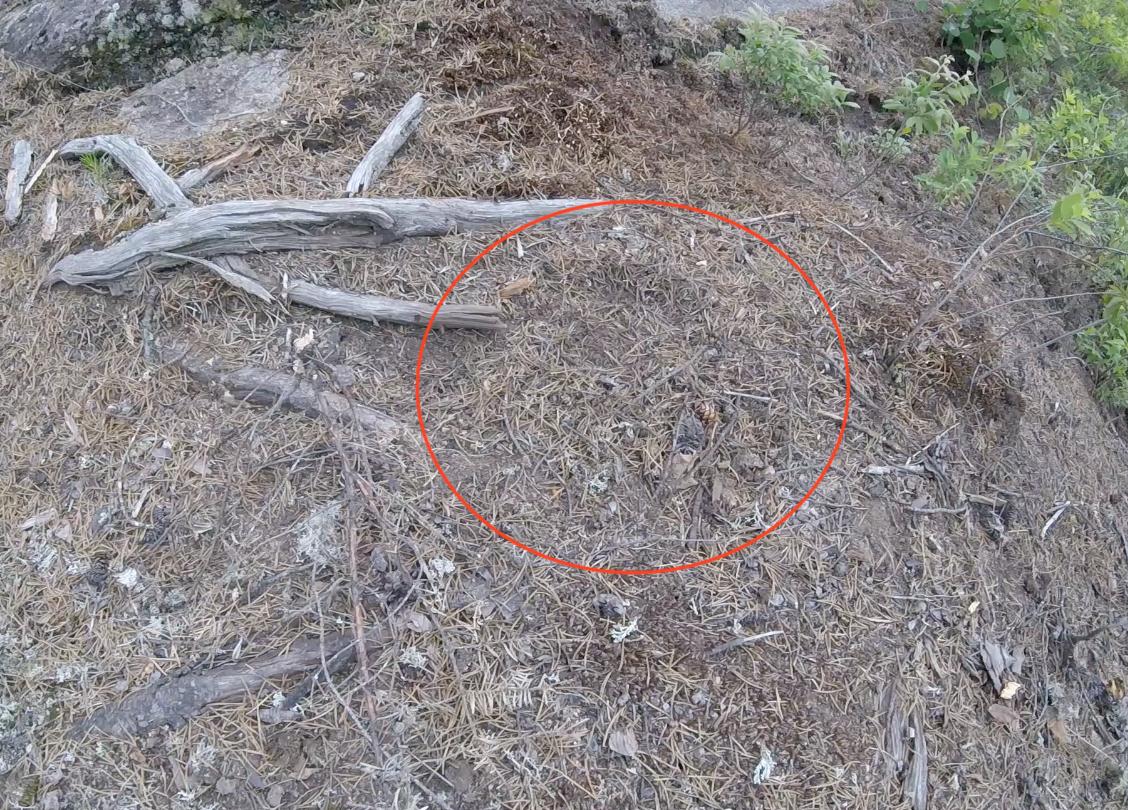 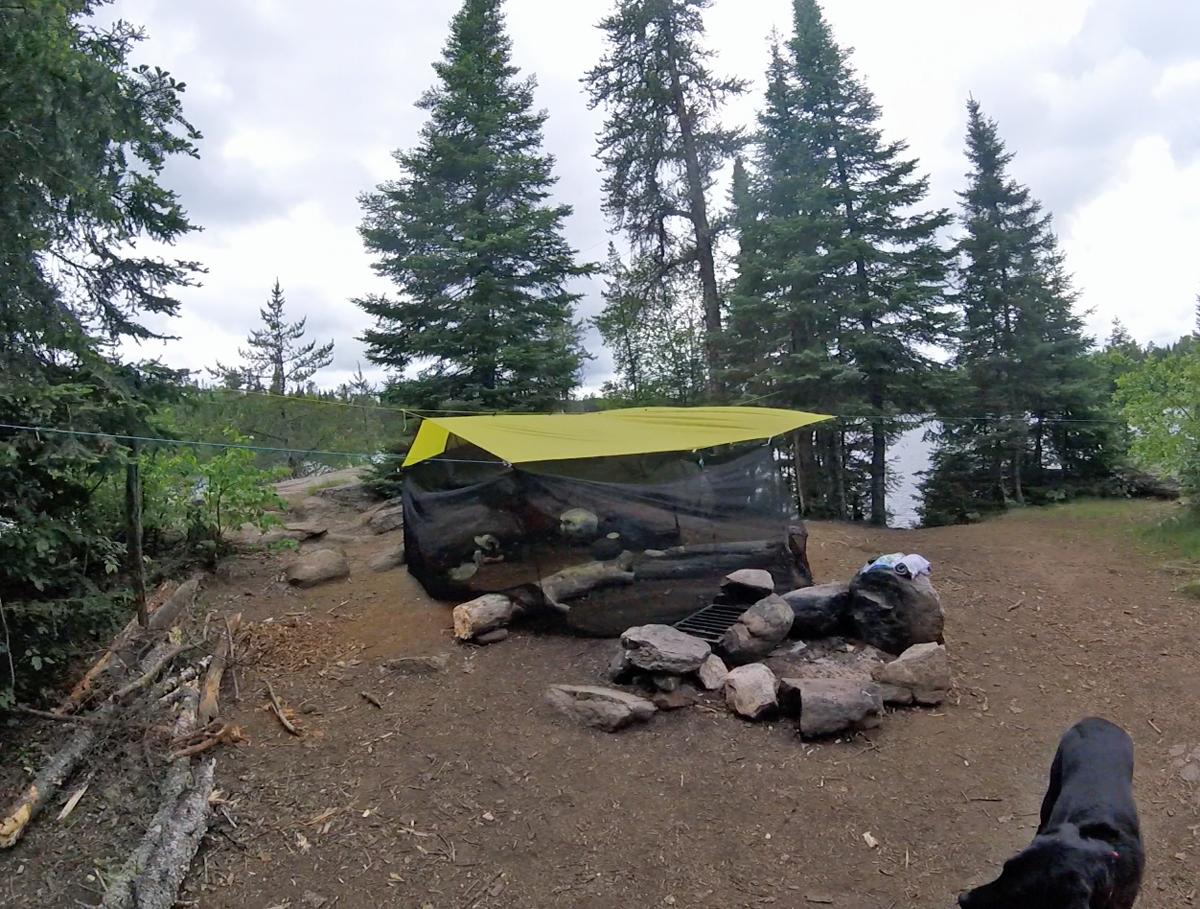 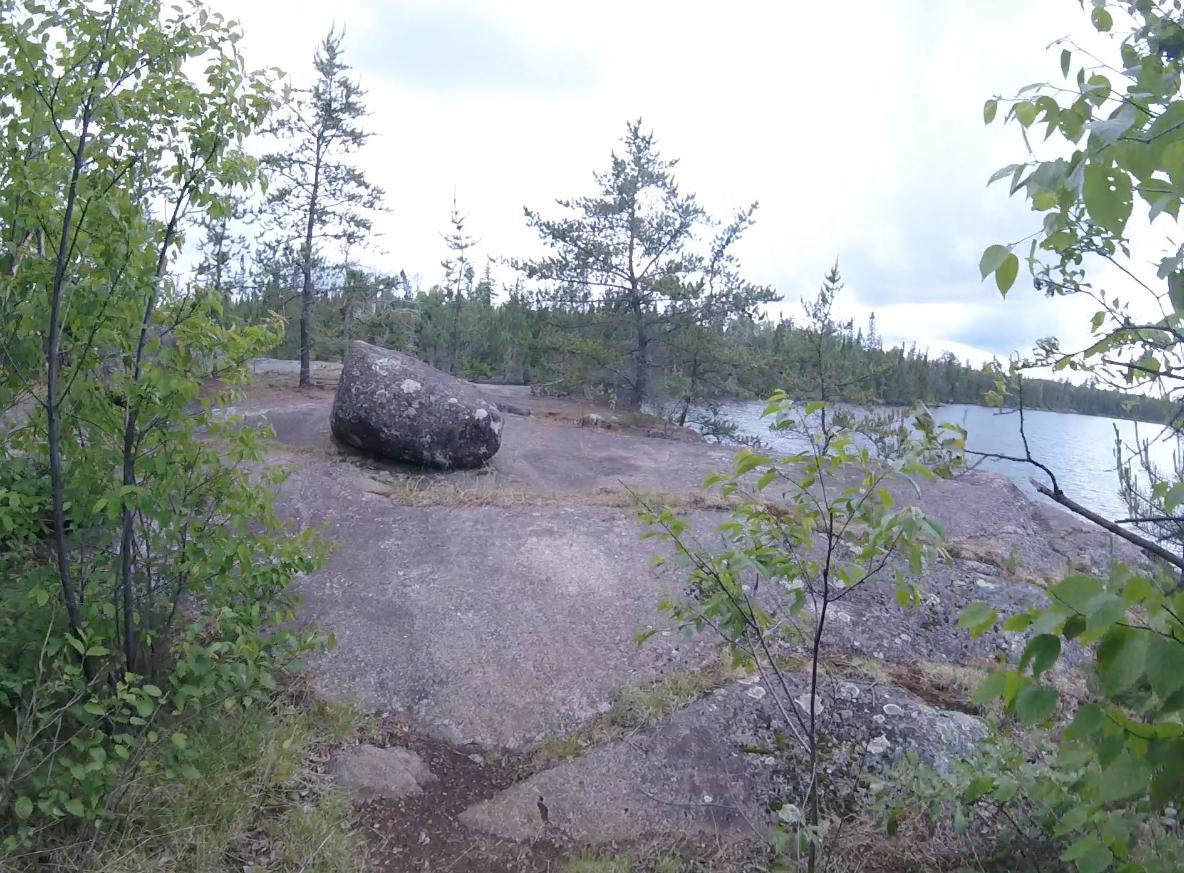 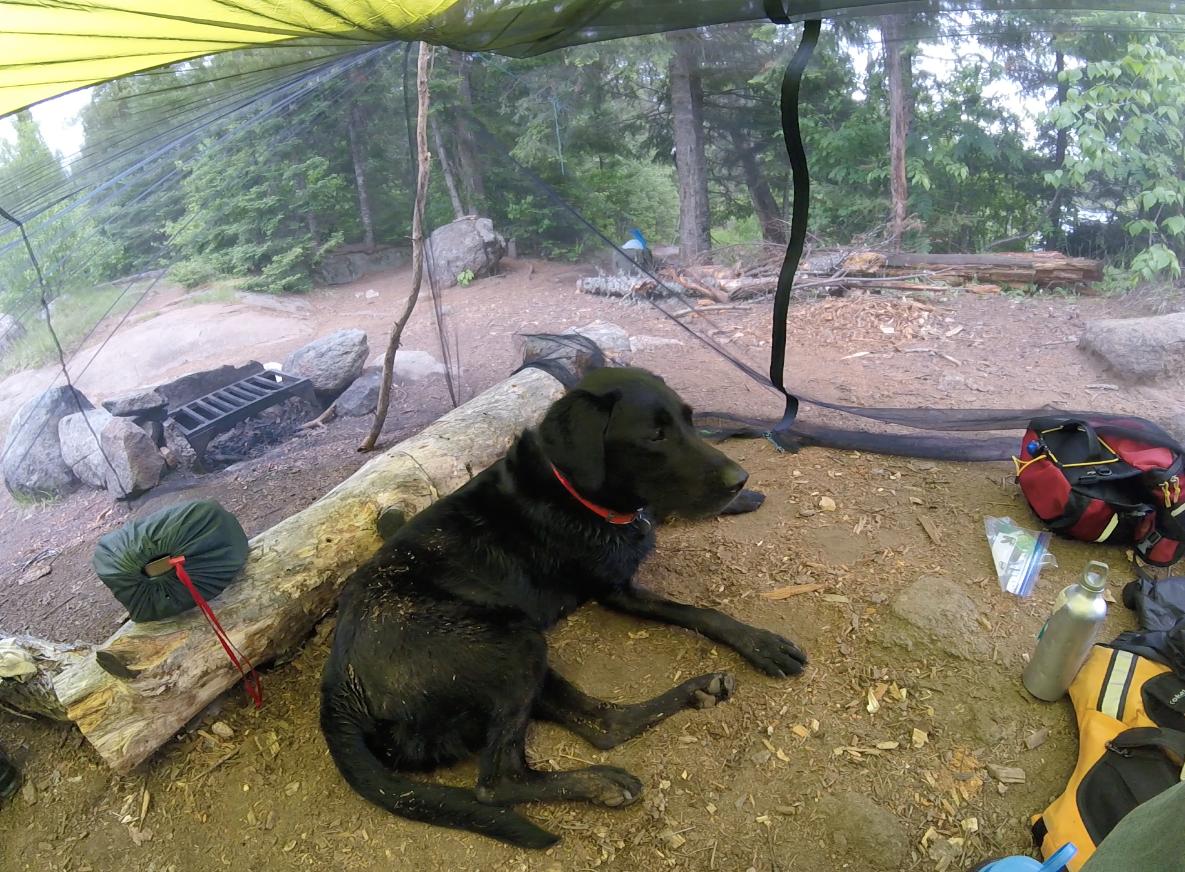