Trip Type: Paddling Canoe
Entry Date: 08/30/2018
Entry & Exit Point: Clearwater Lake (EP 62)
Number of Days: 3
Group Size: 2
Trip Introduction:
After 7 trips to the BWCA, including 5 with my cousin and 2 solo attempts, I asked my brother if he would be interested in the BWCA. He said, I like camping so it should be fun!
Discuss Trip: View Discussion Thread (1 messages)
Report
I was taking a fly fishing class through Park Rapids Community Ed, so the practice class was on Wednesday August 29. After class I drove to my Mothers house to meet my brother for our trip. We were up at 5:30 am Thursday morning heading for Clearwater Lodge. John forgot his sleeping bag and as we were getting to Duluth, mom called to inform us his sleeping bag was still at her place, which is how we found out. I had a backup sleeping bag, so we stopped for breakfast and found our way down the hill and over to highway 61 and the north shore drive. We stopped at the Palisade Head (part of Tettegouche State Park), as I had discovered there was a way to drive to the top, so I did not have to hike. What a Grand view of Lake Superior. We proceeded to sort our gear and get the bags ready to throw in the canoe upon arrival at Clearwater. After 7 trips to the BWCA, I still had not learned the lesson to pack ahead of time - hopefully this will sink in for future trips.
We made it up to Grand Marais and took a left on the Gunflint Trail. I had been to Clearwater for my first trip, so I avoided getting lost and we were at Clearwater Lodge and Outfitters before we knew it. We grabbed the final necessities (fishing license for the brother & some worms), paid to park there and were loaded in the canoe in less than an hour. When you know you will basecamp, bring fresh food and ice, and too much gear, it takes a while to get settled. After a short paddle on Choppy waters from our right, we took the first campsite that connects to the Border Route Trail. We set up camp, made Cheeseburgers and it got dark before we were ready. I even tried a few casts with the fly fishing rig. Didn't go as easy as in class. It was a good night and a long day. I slept well, but my brother was still up many hours before me! By the way, the cheeseburgers were cooked over a wood fire! Big scare - I could not find my fuel for stove, eventually it was found and we used the fuel for breakfast both days. The picture is my brother sitting by the kitchen as our fire gets ready for dinner! 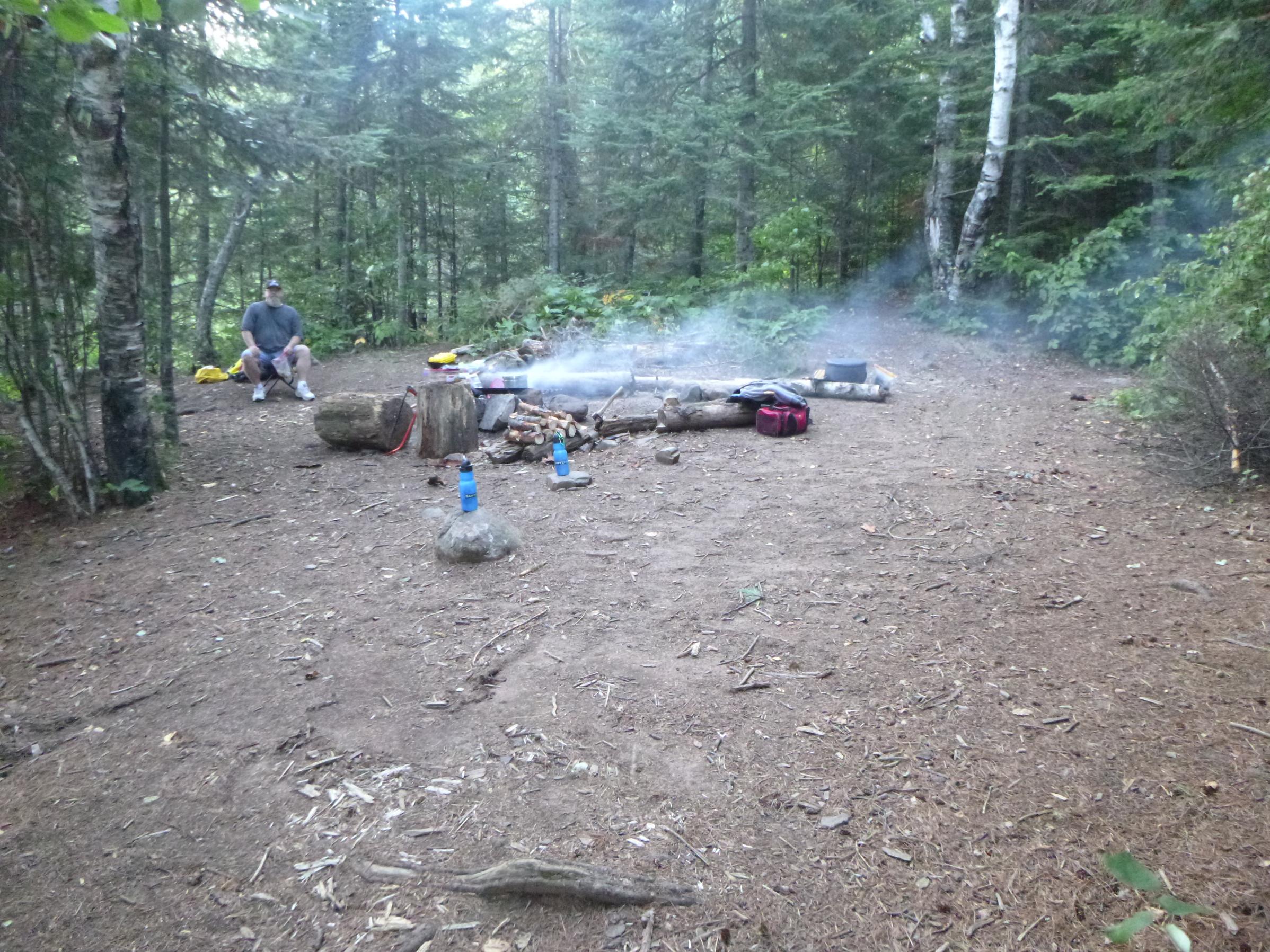 Got up Friday morning and had Sausage, Bacon, Farm Fresh Eggs, and pancakes. My brother informed me that his back was bothering him and we would have to cut the trip short (we had planned on three nights). After deciding that the twisting is what bothered him, we decided hiking would be ok and it was off to the BRT. It appeared to be straight uphill to the trail, and the vegetation was thicker than anything Indiana Jones ever encountered in his journeys. My brother went about an hour with me, and then decided to turn back. Funny thing is we took pictures (below) by the BRT sign and he asked "which way are we going?" I said right and then followed him. The trail dropped and dropped and I'm thinking it's got to go up at some point for the overlooks of Watap Lake. Unfortunately, I found myself hiking the shores of Rove lake, so I could see Canada from the trail! I ended up going another hour and then turned back to camp. My Brother was waiting there for me and we decided to set up the Tarp as it was getting windy and I had not used my new Tarp yet. The CCS tarp performed admirably and we were able to cook the Sirloin Steak and potatoes. I had suggested baked; but my brother said it would be better to cut the potatoes up and fry them. That it was and a long, long, long time later, we ate another marvelous meal. (Stu might be onto something with the fresh food, but it is hard to single portage with all that ice and meat). It ended up being a good day, we survived the predicted thunderstorms (duds), and of course I slept in. 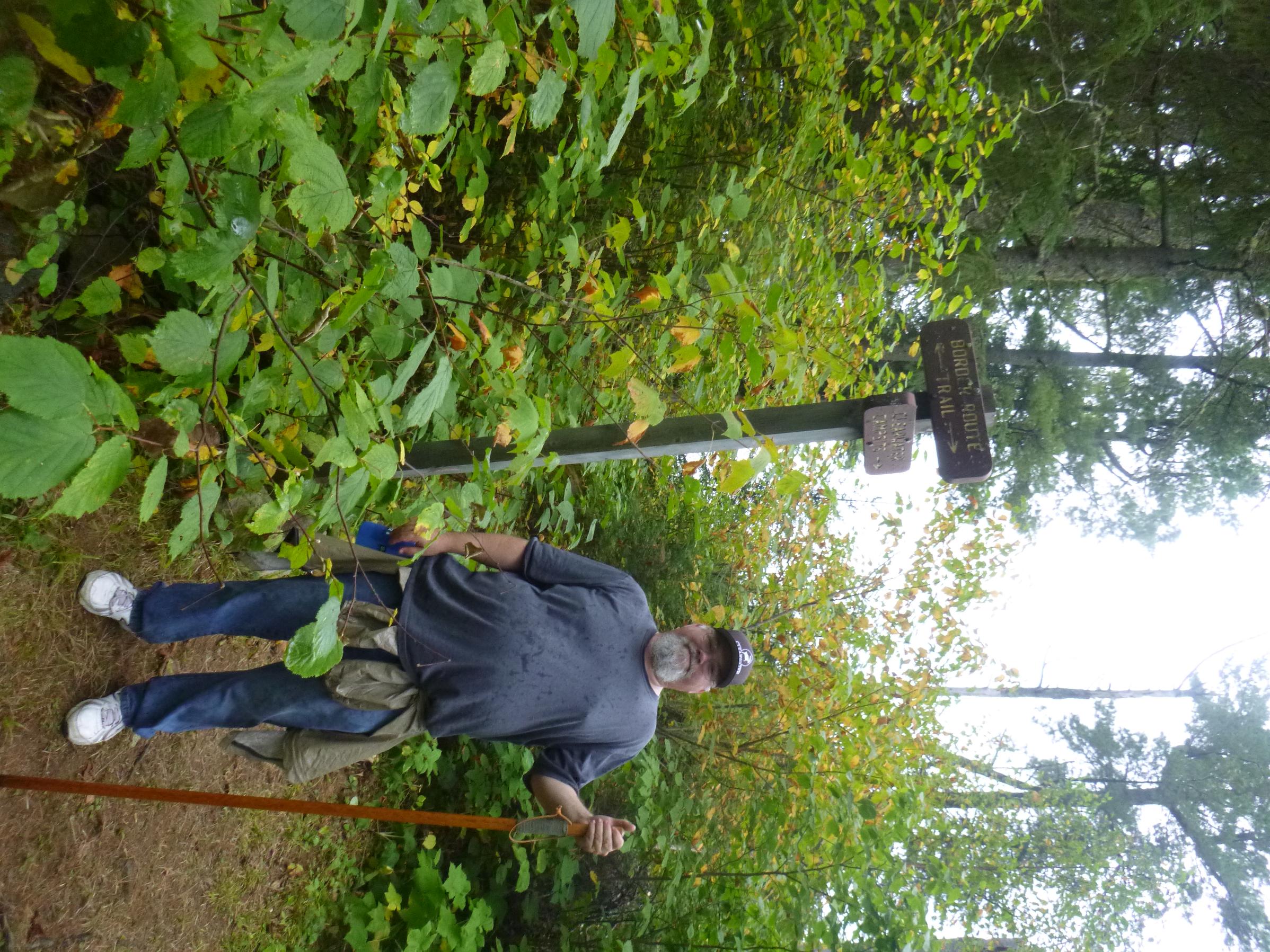 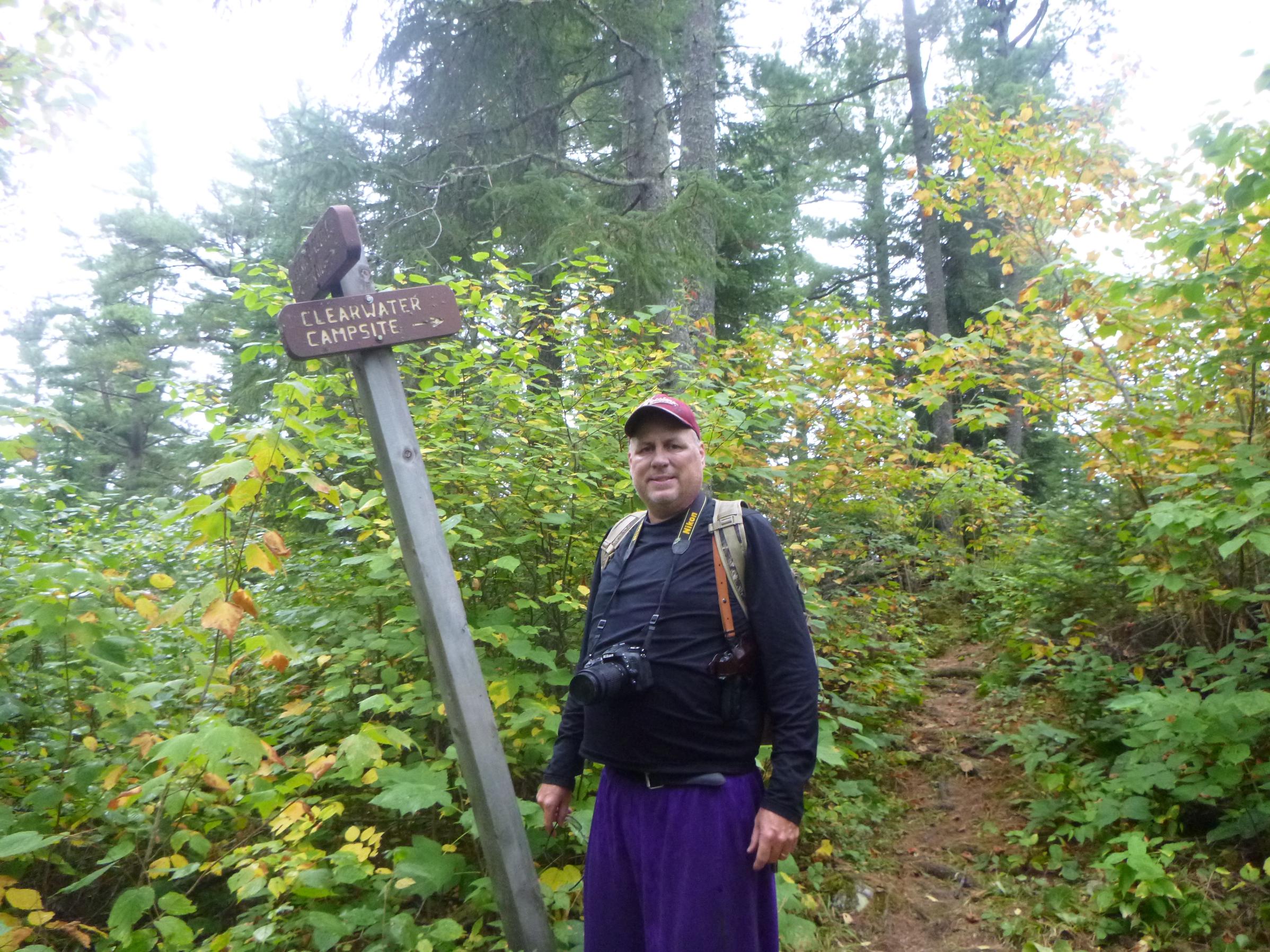 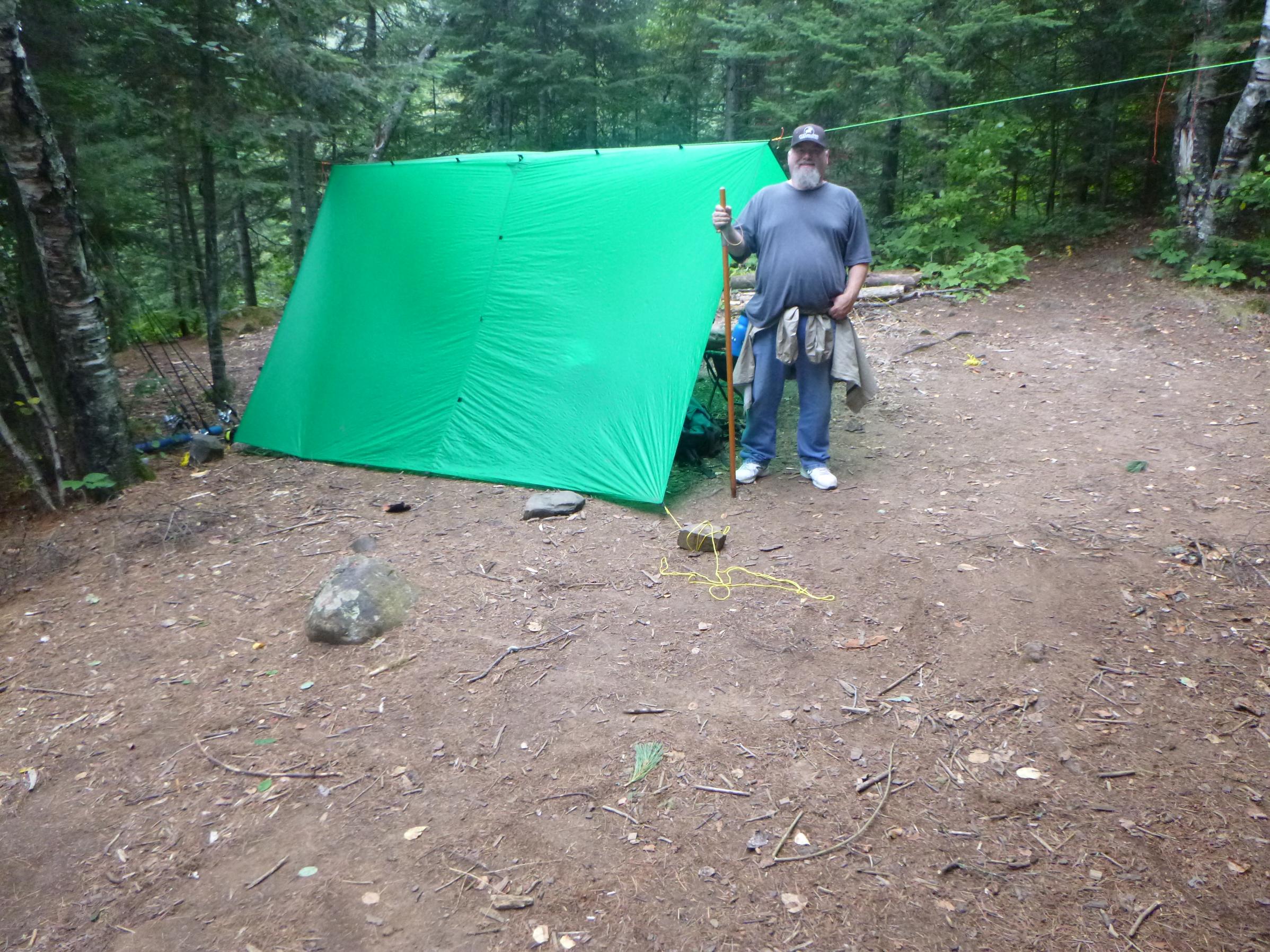 I almost forgot to mention, while we were cooking Friday night, I dispersed the wood chips and soggy pile of wood and branches that had been carried into camp by others. I can understand cutting wood to leave for the next group, but just making a pile of brush and soggy logs is not a practice of leave no trace. And there was plenty of dry wood if you followed the trail back a ways. It almost looked like someone carved a canoe out of a tree, for all the shavings on the ground! 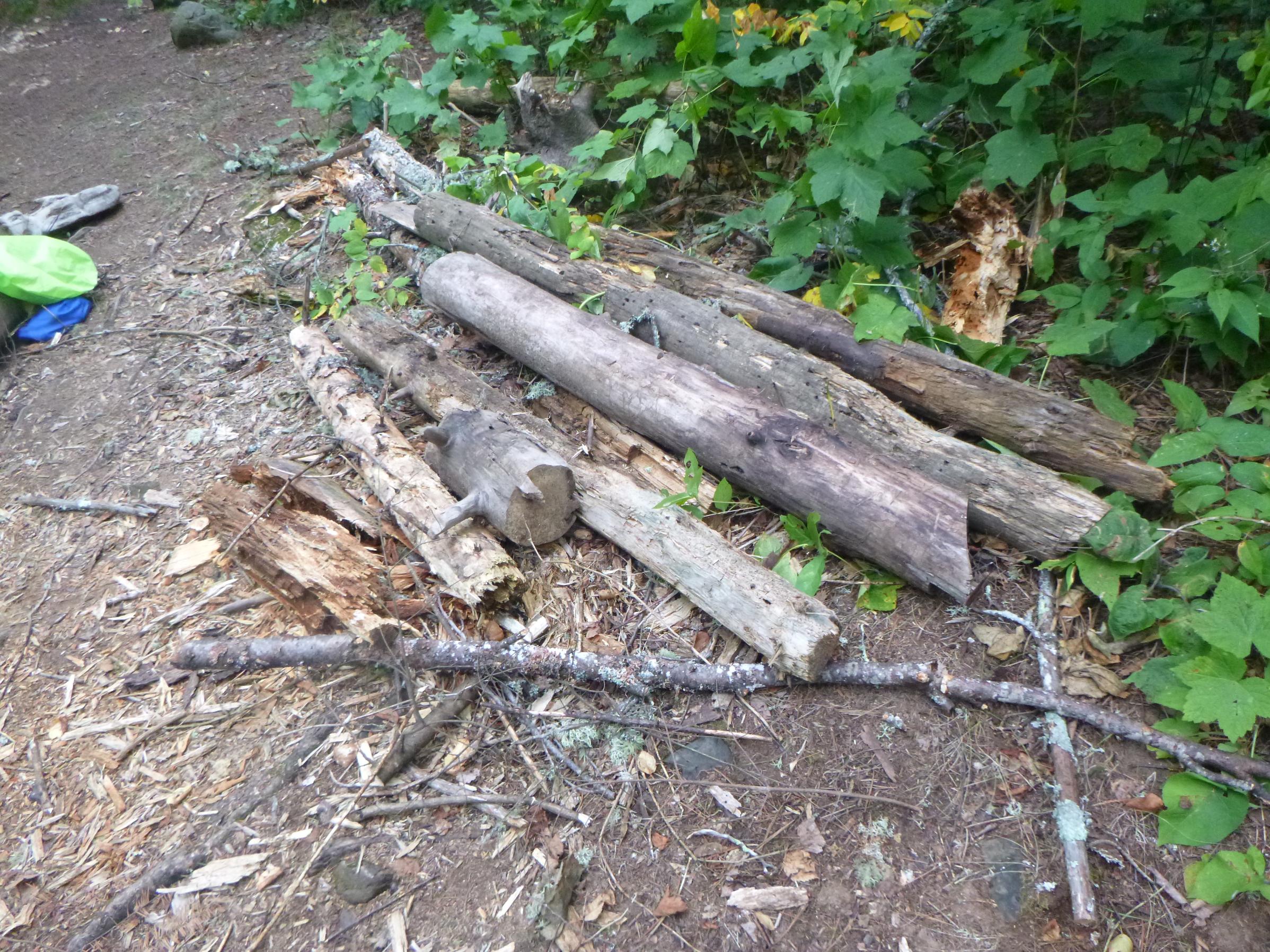 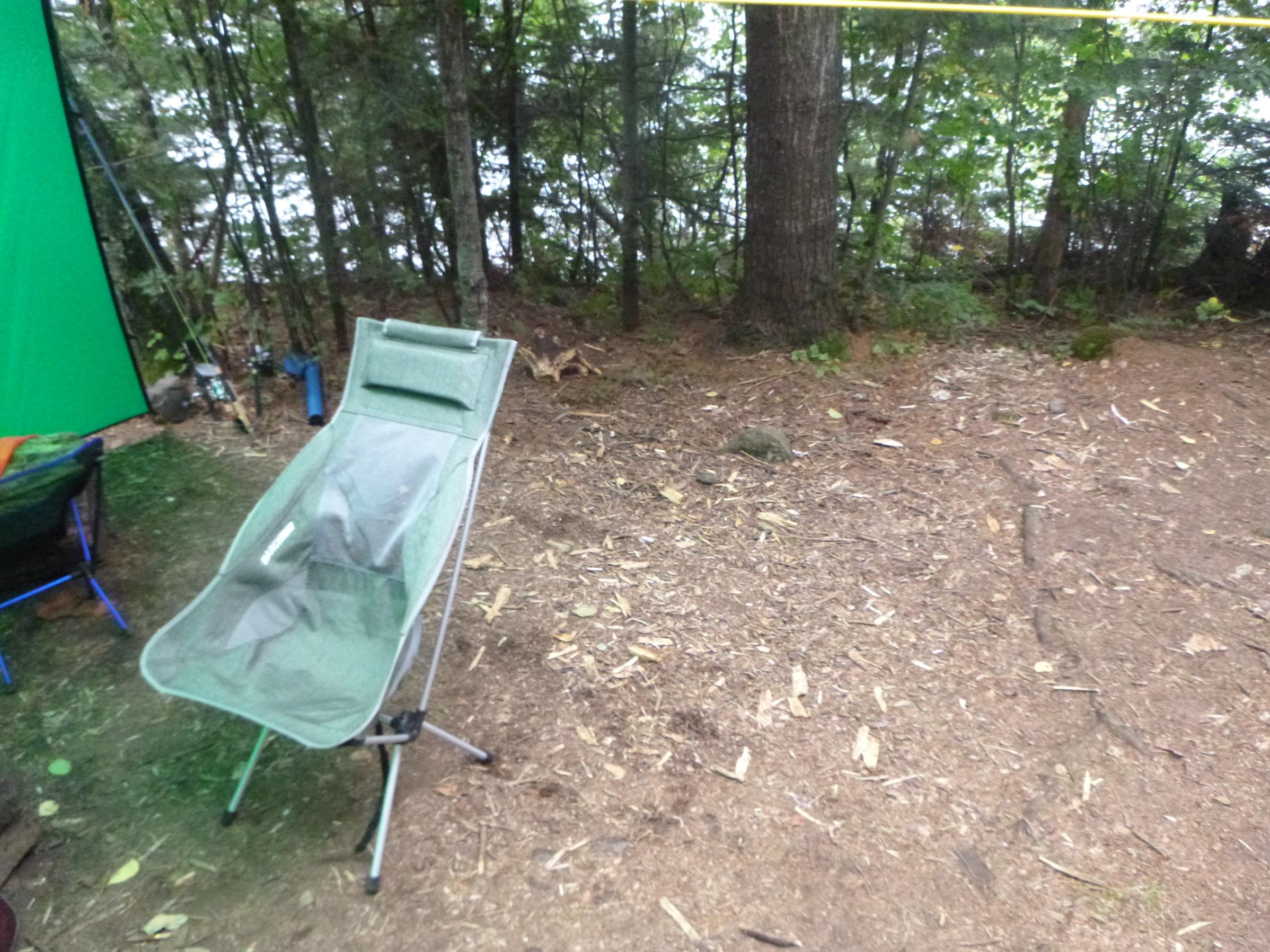 Saturday was pancakes, pack up (almost 2 hours), paddle out, and load the truck. Then it was off for the Gunflint Lodge (my compromise for leaving early, as I was watching there weather cam all spring, hoping the ice would melt - it was good to finally see the patio and docks) - I had the Tater tot Hotdish and my brother tried the fish and sticks, and we agreed the lunch was excellent, even though it was not cooked over fire. Started for home at 1:15 and got to Mom's about 7:45. I had another two hours home - but it was a good trip. Not many pics, but a few! I think my brother will be more for camping a little closer to home next time (about 12 hours from Gunflint Lodge) Two more pictures - our view from camp - tough to beat! 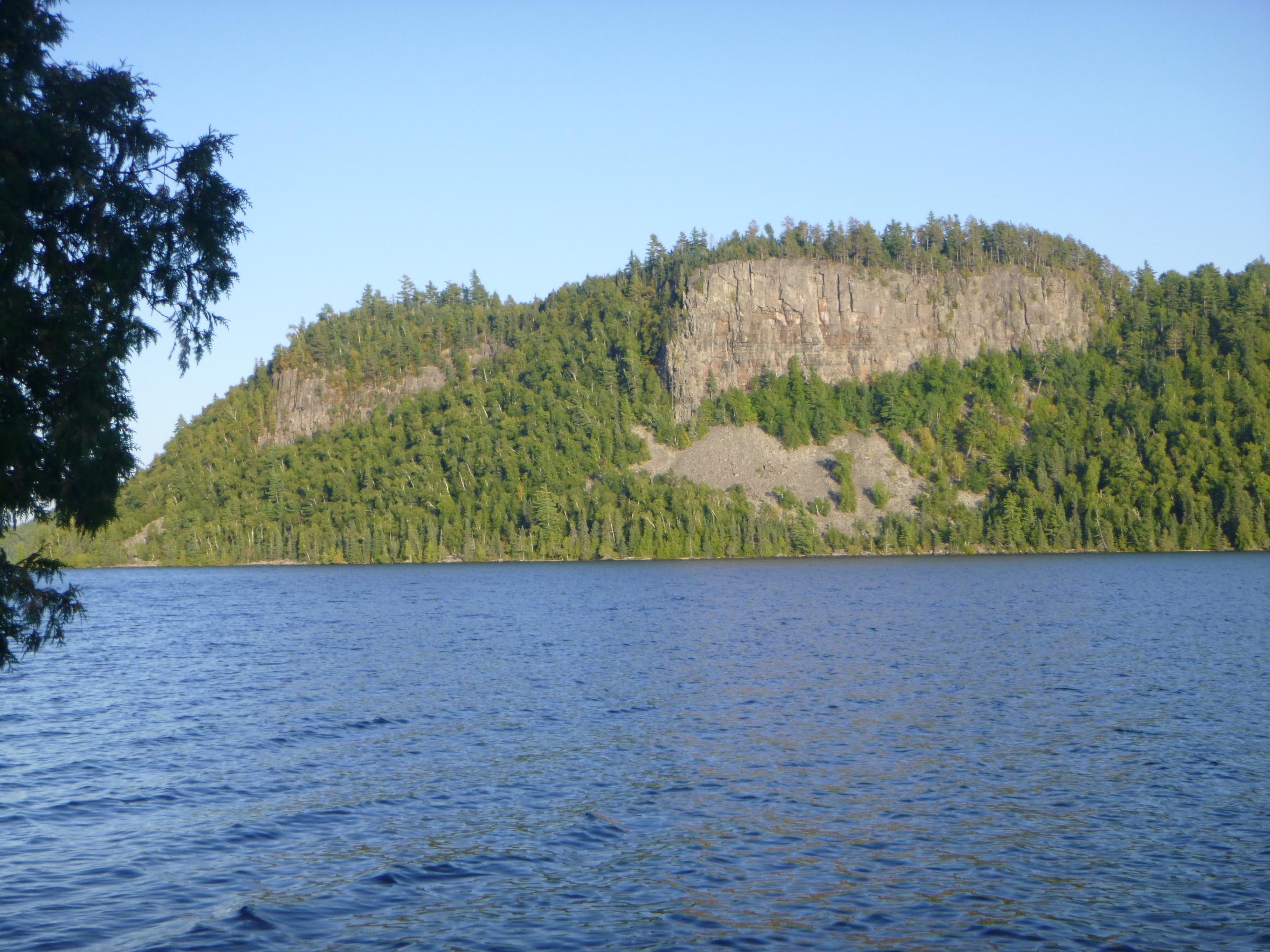 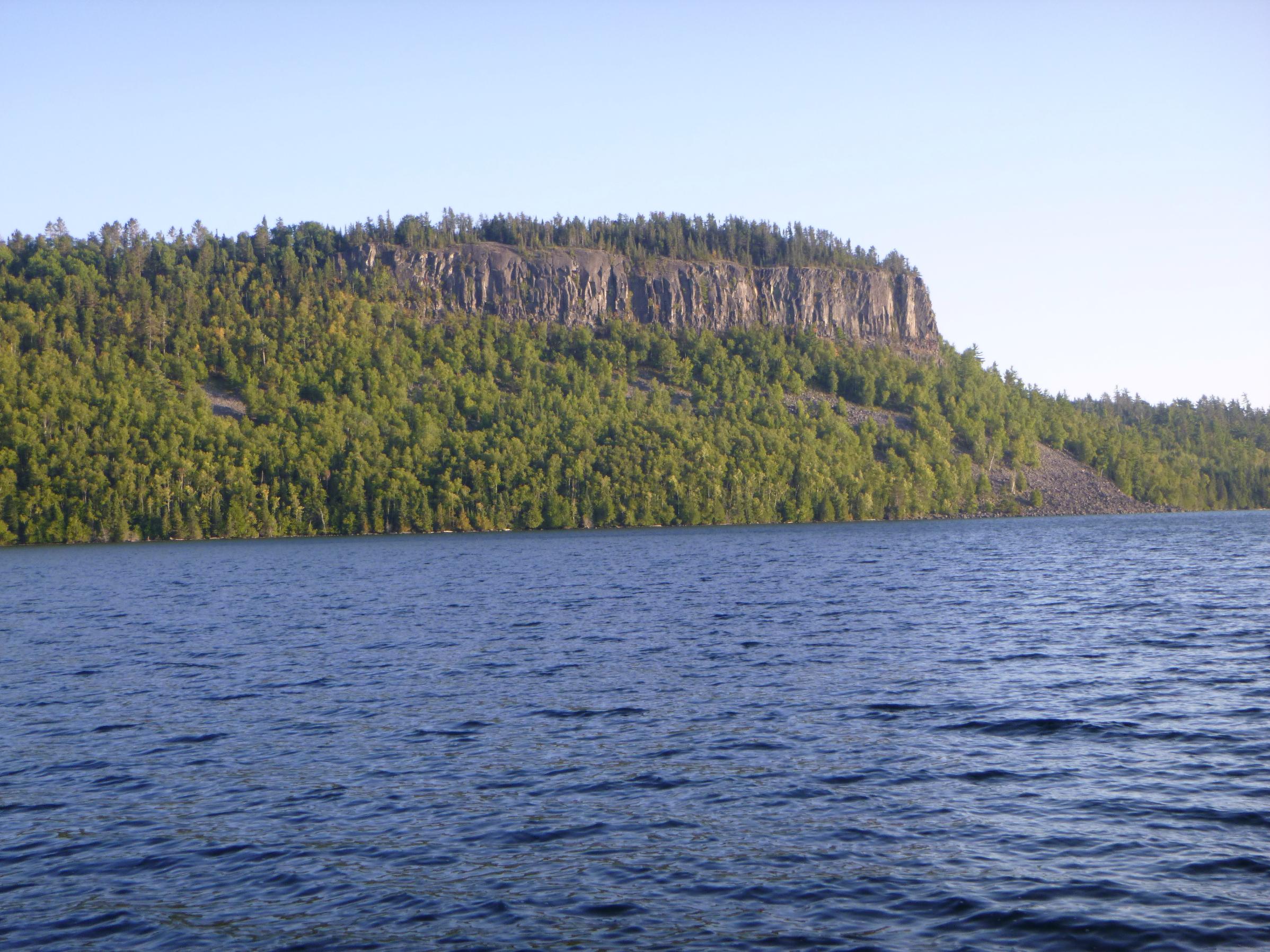