Trip Type: Paddling Canoe
Entry Date: 09/15/2016
Entry & Exit Point: Sawbill Lake (EP 38)
Number of Days: 4
Group Size: 2
Trip Introduction:
This is the second trip my wife and I have gone on together. We only had 3 nights but we wanted to cover some ground and go to an area with good moose potential so we chose this loop out of Sawbill.
Discuss Trip: View Discussion Thread (8 messages)
Day 1 of 4
Thursday, September 15, 2016

The alarm went off at 4 am, and we were on the road at 4:35. I got 4 hours of sleep, that’s more than double what I got the night before our last trip. I also only got 5 hours each night the two nights before so I was not well rested. We got gas, breakfast, and a coffee in North Branch. We were treated to a beautiful sunrise on I-35 south of Duluth. We stopped at Dunn Bros. at 35/61 in Duluth for another coffee around 8 am. Claire drank her coffee fast and we had to stop at Tettegouche for a bathroom break around 9 am.

We arrived at Sawbill at 10 am, just as planned. Sawbill Outfitters was very busy. We had to wait a few minutes but they quickly got the video going for us while they helped other customers so that was nice. They had wifi so we facetime’d with Winnie while we ‘watched’ the video. By the time the video was done it wasn’t long and someone was able to help us. We got the canoe and brought it back to the car to get our gear organized. We ‘portaged’ down to the lake. Our packs were real heavy but surprisingly we were able to get to the lake in one load. I had hoped we could single portage, but as I picked up our two (mostly) loaded packs not long before we left, I knew there was no way we would be able to single. We got the canoe in the water, loaded up, and we were finally on our way at 11:30, not too shabby.

As we got a little ways onto Sawbill it felt like it was going to be a long/slow day. I had guessed 4-6 hours to get to Cherokee depending on wind, single vs double portaging, and just our speed in general. I figured it would probably be closer to 6 because everything always seems to take us longer. We got to the portage at the north end of Sawbill at 12:30, so one hour felt pretty good. I figured since we were able to get from the Sawbill parking lot down to the lake in one load, we may as well try single portaging. I could always ditch the canoe or the pack along the way if it was too much. I loaded Claire up with my new CCS Guide pack since I thought it would be more comfortable for her. I hoisted the Granite Gear #4 onto my shoulders, then picked up the canoe. It was a heavy load but we did it. We met 3 or so groups on the portages between Sawbill and Cherokee. 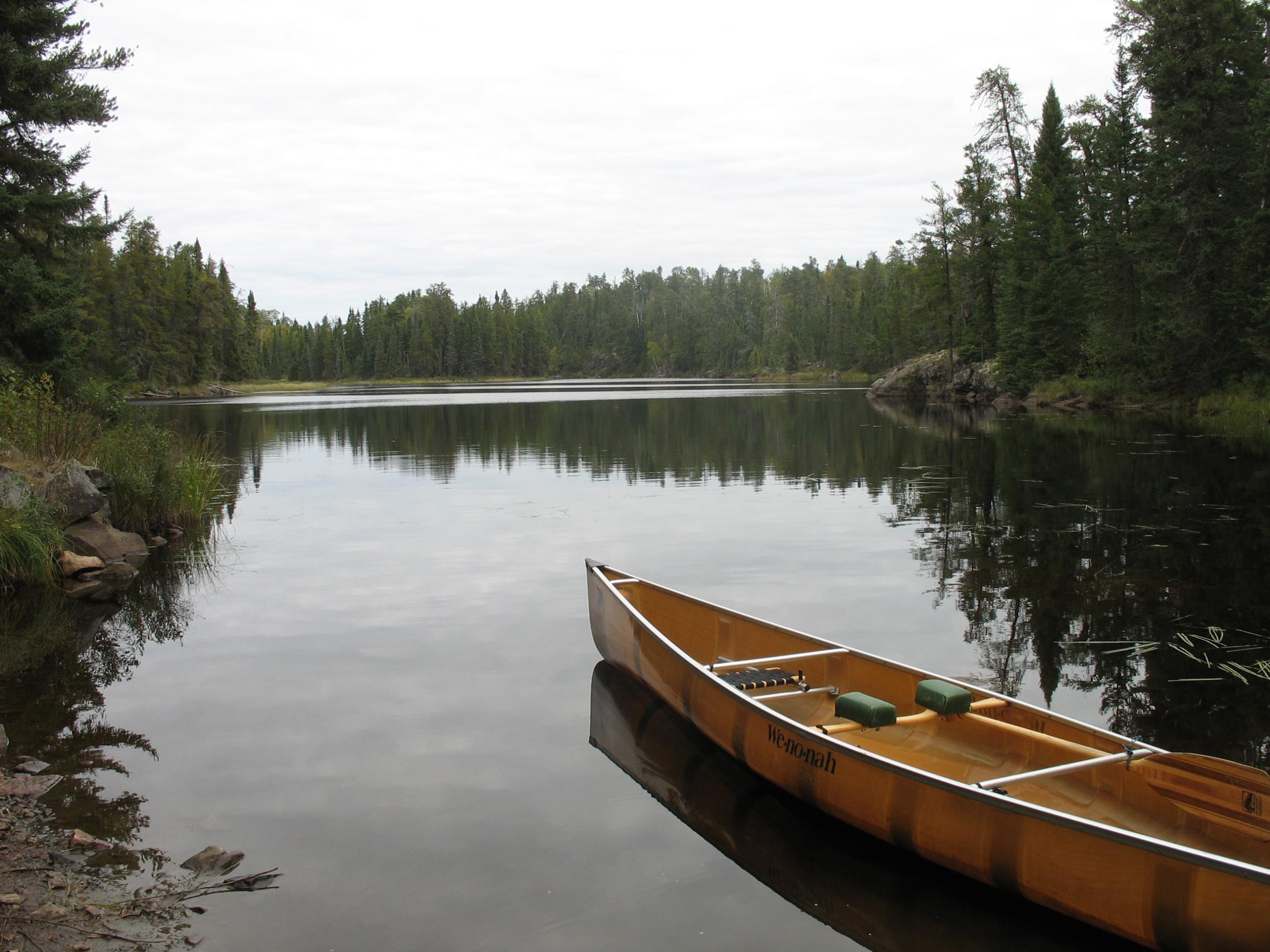 At the end of the Ada Creek/Ada Lake portage we talked to a guy that said the last one was ‘the portage from hell’. I hadn’t read anything about that portage being difficult so I was a little confused. As we paddled up to the Ada/Skoop portage I saw a white head poking up from the weeds. A bald eagle was on the ground, feeding on something right by the portage. As we got closer it took off and flew right over us, only about 30 feet away. The Ada/Skoop portage was pretty annoying next to the creek. It sure would have been nice to paddle that like you used to be able to. It was very rocky and not much of a path so it was slow going.

The ‘portage from hell’ ended up not being bad. It was very easy, just longer. We both got tired at the end. We later realized he was double portaging with pretty large loads so that’s probably why he thought it was so bad. Cherokee Creek was beautiful. We had one beaver dam liftover that, thanks to Movington’s trip report, we made sure not to step off of and sink up to our waist in mud. After checking with our paddles we saw that was definitely a possibility. 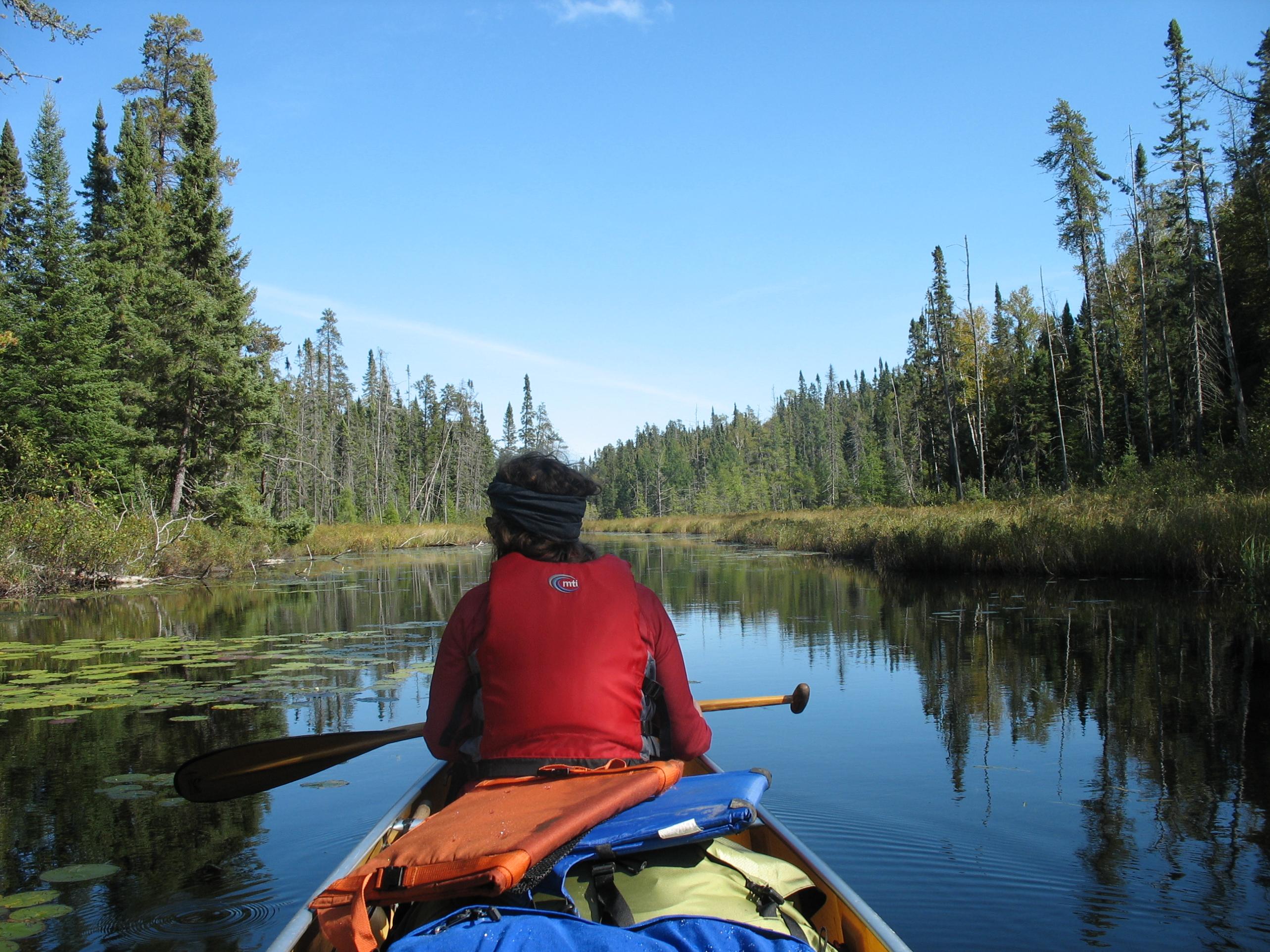 We arrived on Cherokee at 3:30. We couldn’t see anyone at any of the southern sites as you entered Cherokee but we did hear someone. One of the guys we talked to on the portages in said they were at the nice site with the rock (site 899) and it still looked open, but we opted to go further into Cherokee. We saw one canoe out to the north. We went south between the big island (site 888) and the southern shore. It was shallow with rocks but the bottom was solid so I got out and walked the canoe through. We didn’t see the site shown on my map that was just SE of there. We aimed for site 890 knowing that it was supposed to be a nice site and within shouting distance of Friday morning’s portage to Sitka.

It was open! We made it to the site by 4:00 and it was awesome. We had some fois gras that a friend gave us that we decided to bring with to have as a snack with crackers. The little opening tool broke and it took a good 15-20 minutes to get it open. There was a lot of oil and it got real messy, but it was also really good. Earlier at the outfitter, someone asked if we thought we would make it to our site before the rain. That led me to believe rain was coming soon. It actually became quite sunny on our way in and it was beautiful when we got to the site. Clouds rolled in shortly after arriving and we thought it might rain. All of the firewood around the site was wet. We found some dry stuff but still had a hard time keeping it lit due to all of the recent rain. It had been a real rainy summer. It started to lightly rain off and on around 9pm. We were in bed by 10 and Claire was out immediately. The day really couldn’t have gone any better. Claire was able to keep her feet dry all day despite the mud. I was shocked/impressed/proud that we were able to single portage all day. It ended up only taking us 4 and a half hours to reach our site on Cherokee. 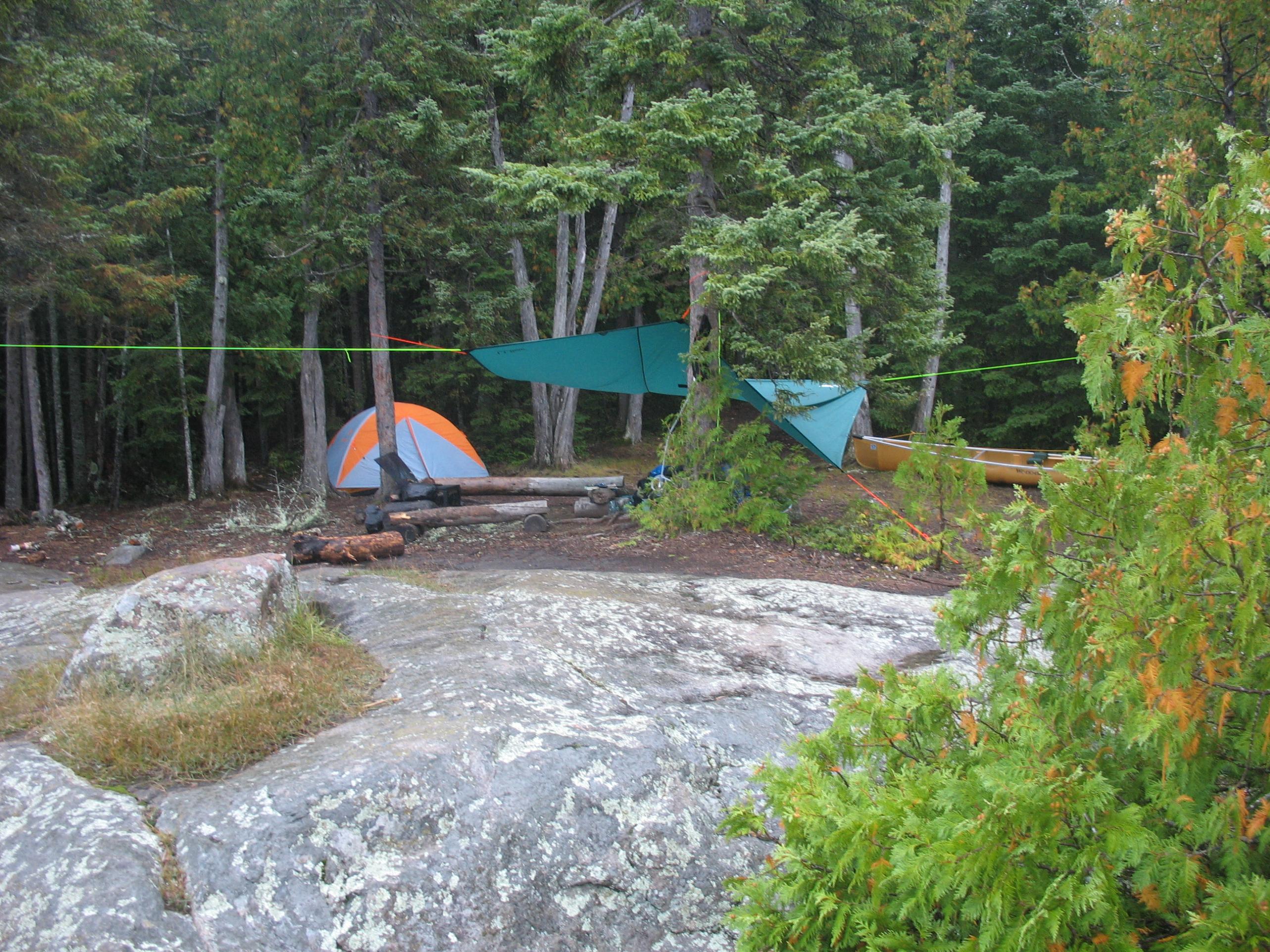 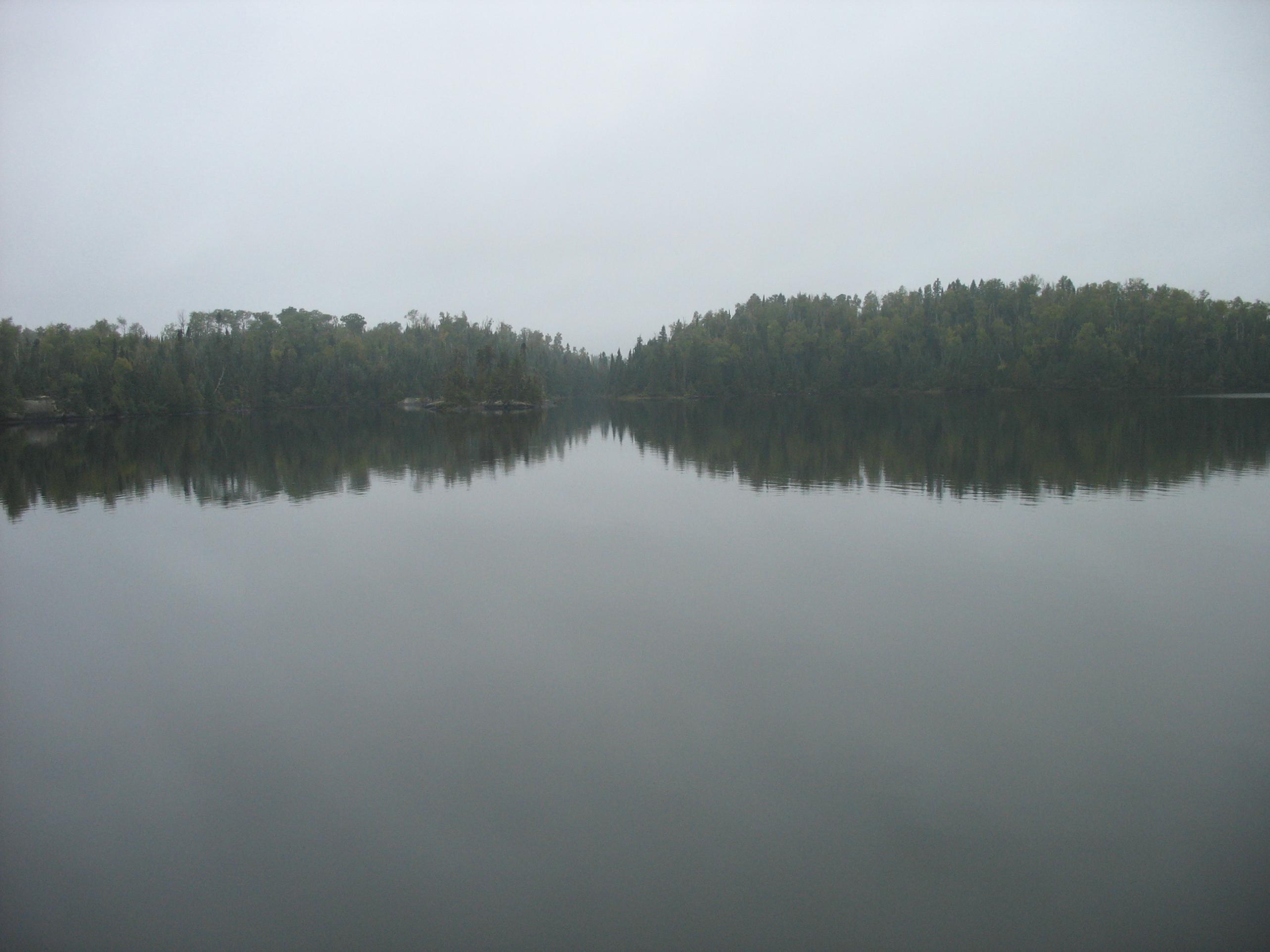 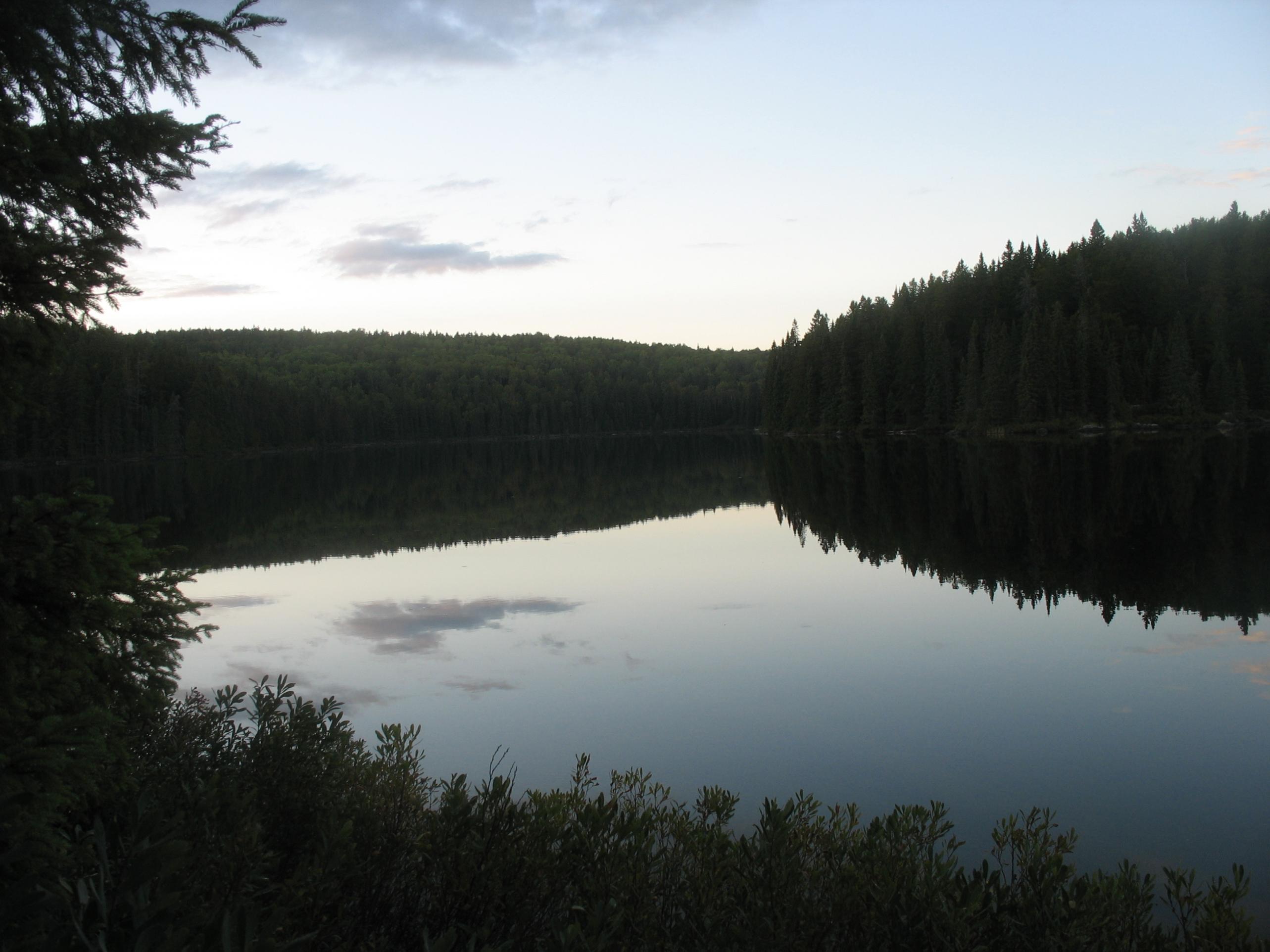 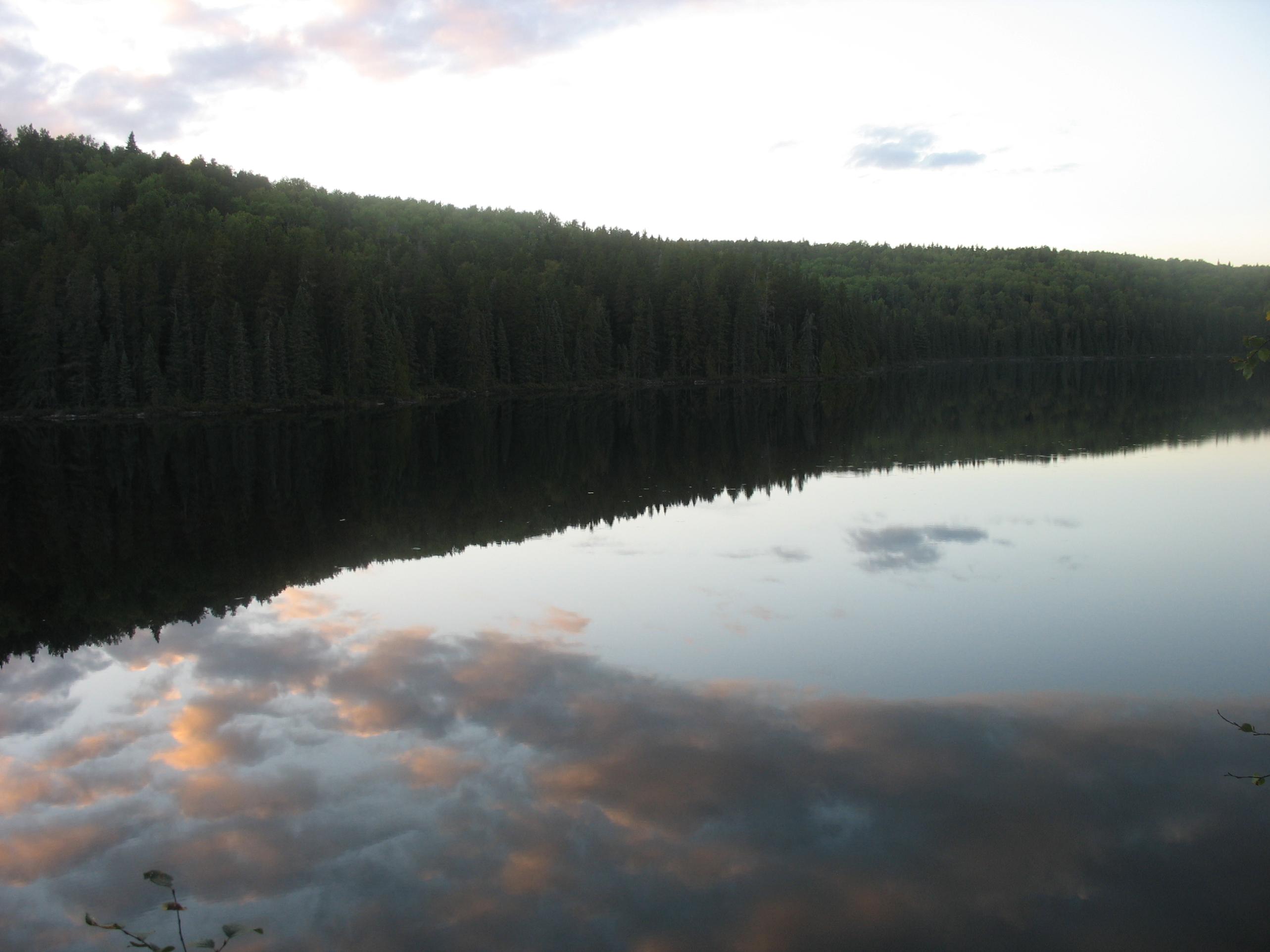