Trip Type: Paddling Canoe
Entry Date: 09/12/2018
Entry Point: Little Indian Sioux River (north) (EP 14)
Exit Point: Moose/Portage River (north) (EP 16)
Number of Days: 4
Group Size: 1
Discuss Trip: View Discussion Thread (13 messages)
Day 2 of 4
The Namakan River:
I woke and ate breakfast as I checked the weather: chance of rain all day with a southeast wind changing to southwest by evening. Forecasted strong storms beginning late tomorrow afternoon. My Namakan route was still a go, but I thought about trying to camp towards the end of the river, to be able to cross the large Namakan and Sand point lakes tomorrow and get back in the BWCA before the storms hit. I broke camp and was again on the water around 8. I headed north to Canada across the main basin of Lacroix, with perhaps a dozen fishing and outfitter boats zooming east and west during my crossing. I headed towards the first nations village and the mouth of the Namakan river. Large signs warned against fishing the river without hiring a tribal guide. I didn’t see anyone moving in the village and paddled on by.


I was a little nervous paddling solo down an unfamiliar river, and while I had studied my maps as best I could I wasn’t sure of the exact portage locations. I knew that the first rapids and large falls were just after the bridge, and so I cautiously approached as the current began to speed up. There appeared to be a landing river right at the base of the bridge, but water levels were low, and the snake rapids just beyond the bridge looked manageable. I found the preferred line to be just left of center and ran the rapid without a scratch or worry- and maybe only one standing wave breaking into the canoe. The large snake falls begin about 60 yards after the rapids though, so it is a quick ferry to the right bank where a takeout lies with a 4-wheeler trail leading back into the woods. I portaged down past the falls and put in on the rocky shore below. There was a fair amount of trash and junk in the woods, but the falls were a really beautiful place. I felt good from passing the first obstacle, and was excited as I paddled the Ivy channel north out of the reservation and into true wilderness.

This was my favorite section of the river; it was small and beautiful and wild. I had to negotiate a few riffles and tight spots that were probably only present in low water, but it was easy travel until Ivy falls. The portage is river left, and a good downhill climb, but the tricky part is below the falls. There are two small islands (one of which holds a great campsite) and the river divides into three channels around them before reforming a solid river. The middle channel looked best, and I tried to get as much forward speed as possible before being sucked into the current. I only bounced off of one rock, but otherwise managed the fast water okay until the channels joined up again. The river then widened to become Threemile lake, and I chugged along with the SE wind pushing at my back. There looked to be an outpost camp on one of the islands here, with a floatplane dock and a pile of upturned canoes.

I paddled past Bear island and to the next set of rapids(Squaw rapids). In higher water you might be able to run the right hand side, but the portage is short and straight down the middle of the small island separating the river. At this time the wind had shifted to due south, but it didn’t bother me much on the river. I saw one bear briefly on the north bank near Wawa island. The upcoming Quetico rapids show a 160rd portage around them, but as I got closer they appeared fairly mild. Perhaps it was the south wind blowing up against the current that created a few big standing waves, but I ran the whole set without any worry whatsoever- and no rock hits at all. I did have to fight a few gusts paddling across Bill lake, and then cautiously approached the High falls from the far left. You can hear the roar from quite a ways away. 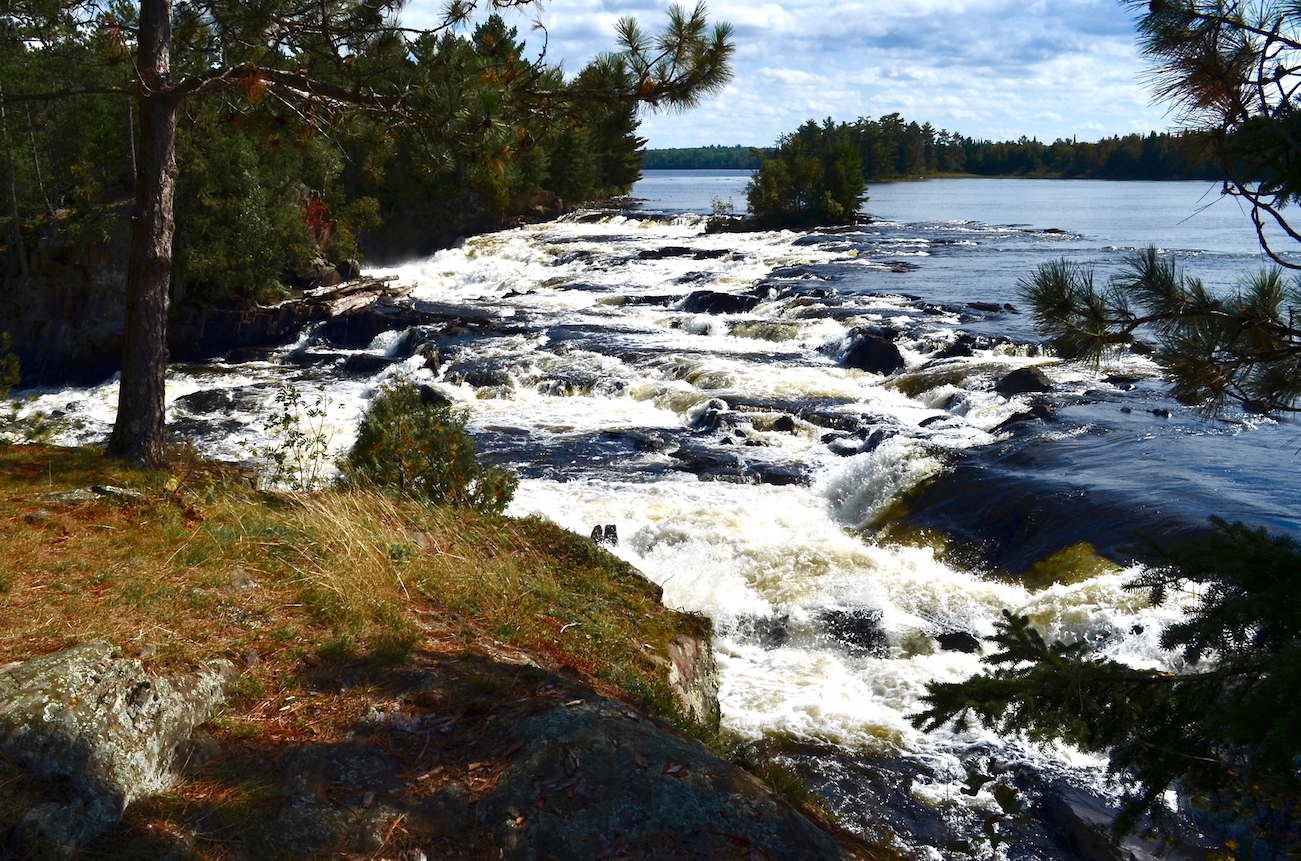 There were two fishing outboards with tackle and beer coolers tied up at the landing, but oddly enough I never encountered the fishermen themselves and it remains a mystery to me where they were. I portaged the canoe to the bottom of the falls and went back up to the cliff edge to take a look and eat lunch. There is a clearing looking over the falls that would make a neat but very loud camp. The falls were spectacular- even in the low water. I thought of the recent dam proposals and surveying of the last 5 years that almost put a power generation dam at this site. How much of a loss would it be if the falls were buried in concrete, and the upstream river forever altered by a dam here. I took out the camera to shoot stills and some video of the falls. My tripod was back in the canoe so I layed down on the ground to stabilize the camera on a rock in front of me for the video. I got about 10 sec of video when all of a sudden I see something move between my face and the outstretched camera--- a snake!!! I jumped in the air and *may * have said some bad words. Yikes! It was just a garter snake, but the unexpected meeting at close proximity surprised me for sure. I headed back to the canoe to refill water and paddle on. 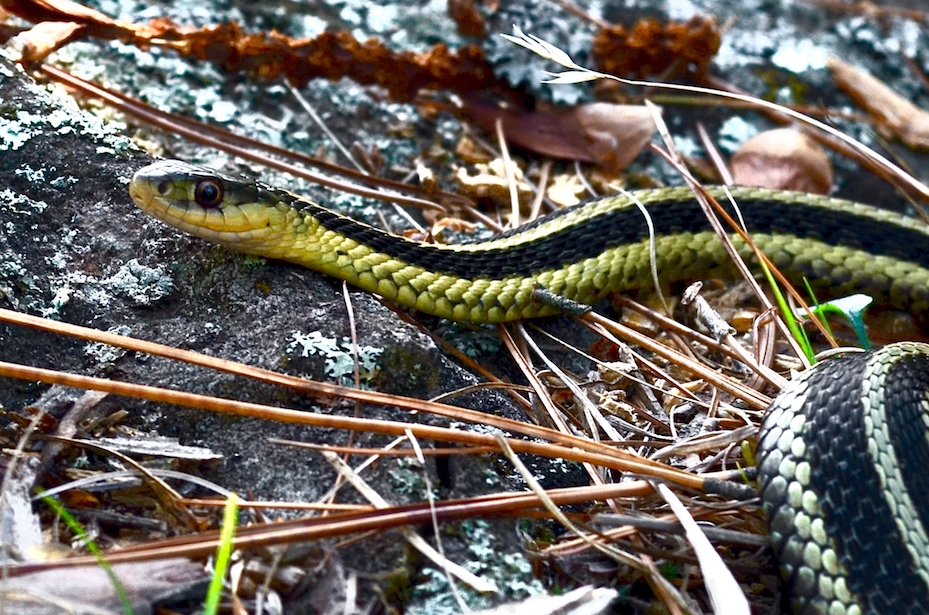 Next was Little Eva lake and the Hay portage. Note that the Hay portage location is incorrect on the Mckenzie maps. Don’t paddle the riffle past that small island to look for the portage. The real trail starts further east, at the mouth of a small creek right in the center of that little bay. It is marked correctly on the big wall map at Piragis. The portage is maybe 180rods or so, but it brings you all the way down past all of the hay rapids. It was overgrown and not heavily traveled at all. The downstream landing is a nice beach, but I thought it would be very difficult to find the trail if you were traveling upriver. The day had clouded over, but it had not rained and I felt fortunate. The river is more narrow and focused at this point and travel is a little faster. You can see the bridge over Lady rapids from a ways upriver. The portage on river right is well defined, and there was actually an upturned canoe and cooler just sitting there. Note that you should not take the right fork of the trail that leads up to the road. Stay left along the riverbank and portage right under the bridge. I thought the water looked benign enough, so I was able to put in right before the bridge and had clear paddling in only moderate current for the rest of the rapid.

From here out it is bends and turns and the occasional Fishing boat coming up from Namakan Lake. There were lots of eagles on this section of river. I could tell the wind from the southwest was getting a bit stronger, and the gusts would occasionally come down between the trees and harass me. I kept an eye out for a place to camp, but also reasoned that pushing just a little further on would land me on the edge of Voyageurs National park and give me a head start on tomorrow’s paddle to beat the storms. Crossing into Namakan lake gave me a full on headwind, but I hit the gas and made way. I paused briefly for a friendly chat with a cabin owner on the south shore who was out cleaning his dock. Then it was a little further west to the Namakan Narrows and back towards the USA.

I had never paddled the narrows before. They were amazing with a skinny lake route twisting among cliffs on all sides. It reminded me of the Wisconsin Dells but without sandstone. It did take some care to stay out of the way of the occasional motorboat that was also winding its way through the narrows- but I could hear them coming. It was after 6:30 when I made camp on the northern side of Sand Point lake. I heartily ate dinner after 28 miles of paddling the Namakan river as a day-trip. I explored the island a little, but there was no sunset on the cloudy evening and the darkness came early. A little bourbon and reading before bed. Sleep was blissful and uninterrupted.