Quetico: Slugs and Solitude
by wyopaddler

Trip Type: Paddling Canoe
Entry Date: 08/14/2017
Entry & Exit Point: Quetico
Number of Days: 21
Group Size: 2
Trip Introduction:
In concept, this journey was undertaken to commemorate the 60th anniversary of Tony’s birth, but in actuality I needed the trip as much as he did. Having taken multiple Quetico trips in the past, we embarked on this longer trip in order to explore some new and deeper territory. This was designed as a traveling trip with some fishing thrown in too. In the end, we traveled 225 miles paddling and portaging combined, in what turned out to be our rainiest/buggiest trip on record. Regardless, we had a great time, returned refreshed, and are currently planning our next visit.
Discuss Trip: View Discussion Thread (20 messages)
Part 1 of 7
Day 1, Monday August 14:

We woke up at 530am to a damp and cool camp in the Dawson Trail Campground. 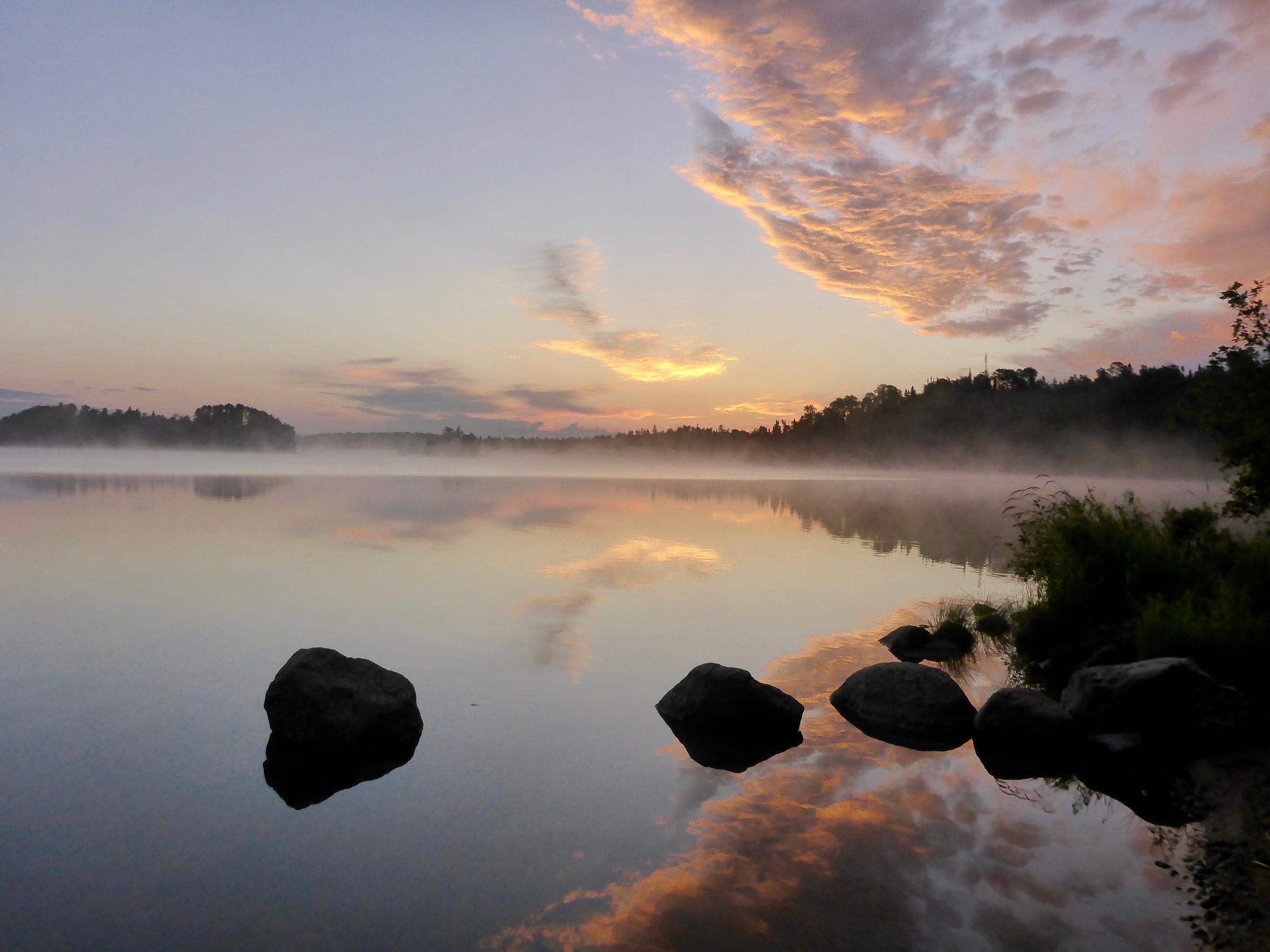 We brewed up some coffee and wolfed down some muffins and an apple while we packed up and tried to dry the tent. We launched onto French Lake at 845am into a slight headwind and had a peaceful paddle up the Pickerel River to the lake passing one lone paddler and meeting two other boats on their way out. 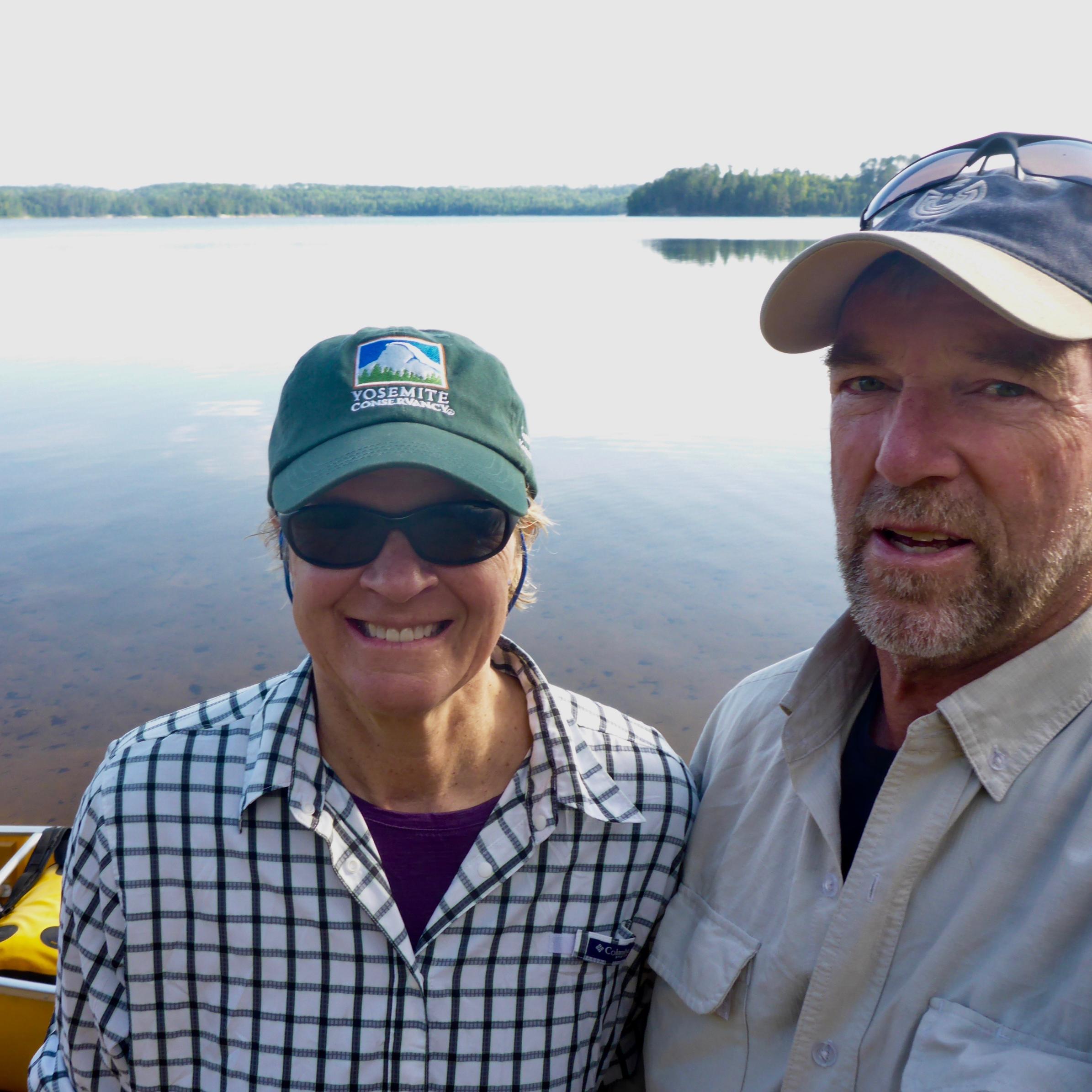 A small loon family greeted us, a flotilla of mergansers drifted by, and solitary turtle swam in the thick grasses. As we moved for a couple of hours east on Pickerel, like a moving meditation I let the rhythm of the paddling clear my head of all thoughts. “My face hurt from smiling” at the thought of the 21 days in the Quetico that spread out in front of us. We lunched on a small island on the west side of the lake but didn’t dally long as thunder rumbled in the distance behind us and we could see the dark clouds building and plotting a path toward us. We took off toward Pickerel Narrows racing a wall of rain and losing. We rapidly shrugged into our raingear as it swept up and over us. Luckily, it wasn’t windy so we paddled along in the warm rain for an hour making pretty good time in the dead calm wetness. 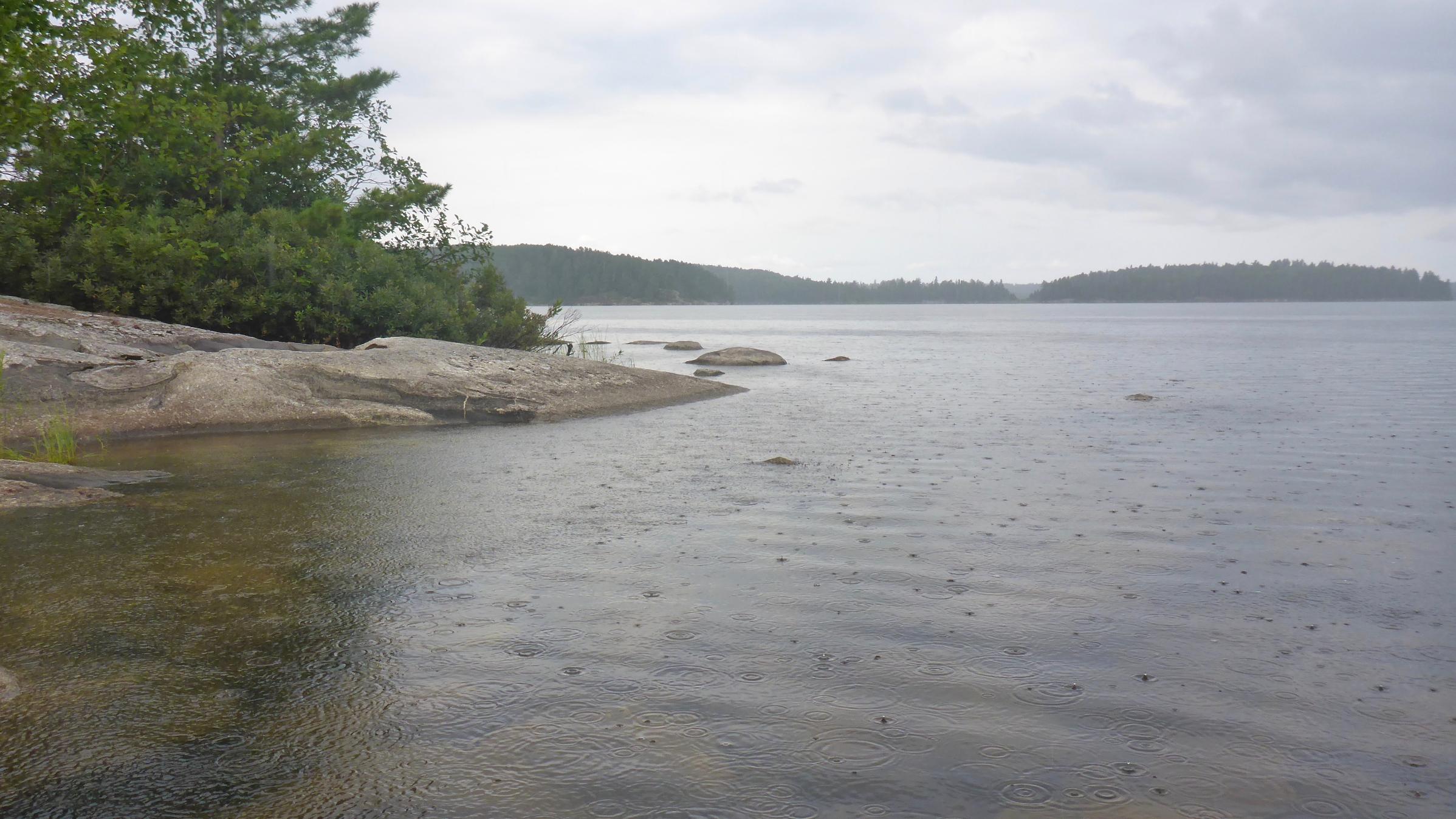 The storm cleared and we took a short break on an island camp just short of the portage into Dore Lake. Some hosers had left the firepit full of duct tape and other trash apparently assuming someone else would clean up after them. . . They were right. The sandy, relatively flat portage was straight forward and we made a beeline to the closest camp in order to try to nab a fish for dinner. 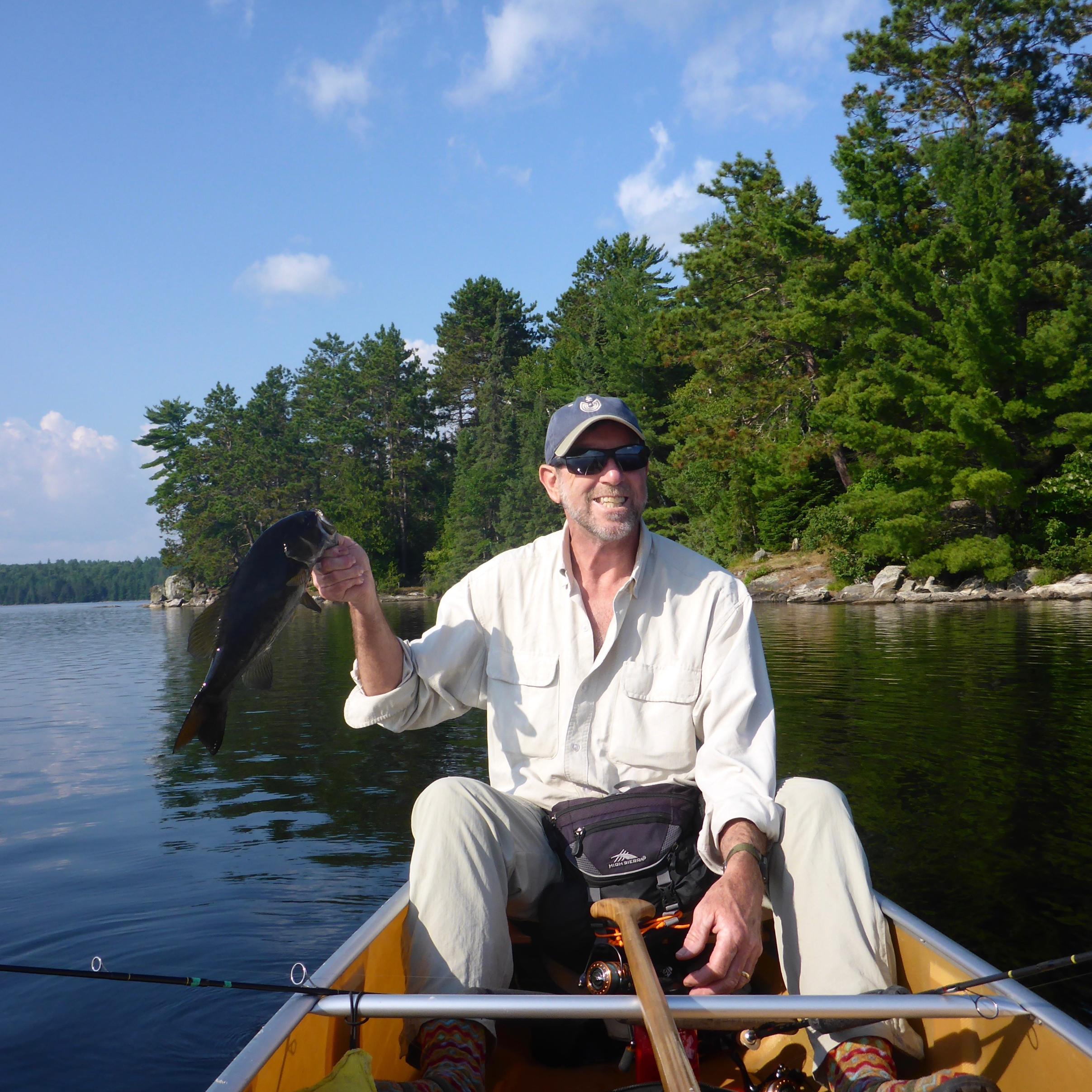 Tony caught a nice walleye and then a nice bass but somehow failed to get either on the stringer and after a handful of other small takers that were released, we headed back to camp for a swim and a dinner of dirty rice and chicken followed by tea and Coffee Crisps (Canada’s best candy bar.) I had to go for another unplanned swim when our pot rolled off of our ledge kitchen and floated onto the lake. Tony found it quite amusing. (The photos have been deleted.) 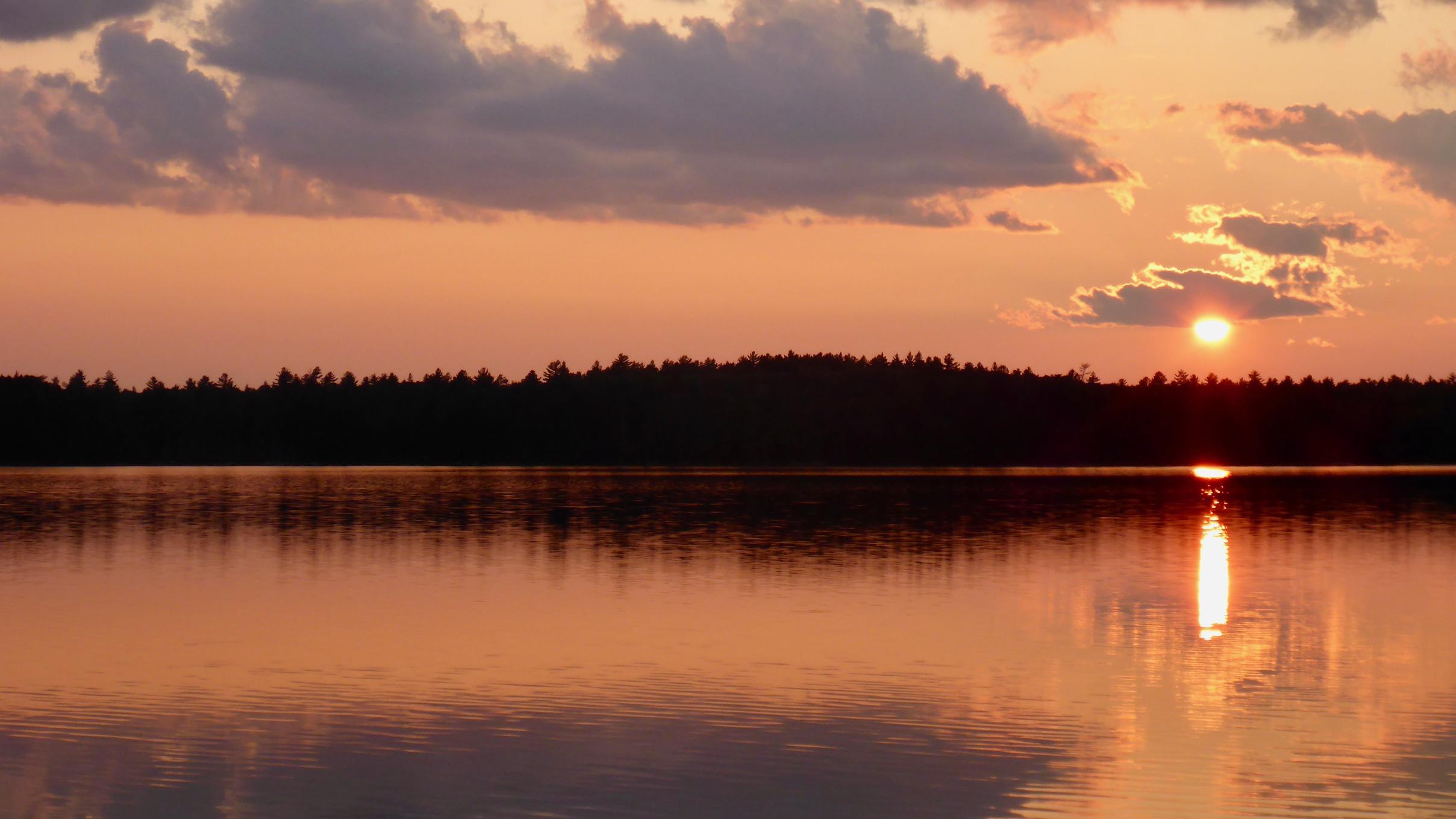 ` We sat companionably watching the sunset, listening to an owl call to its mate, but shortly thereafter we were chased into the tent by the marauding mosquitoes. The rangers warned us they were bad this year. . .

We got up at 600am to clear skies. We had a bagel and hot drink breakfast with a large beaver that cruised by nonchalantly. We launched at 830am, paddled by two occupied camps near the portage to Twin Lakes where we shared the portage with a family from Thunder Bay and some hungry mosquitos. We fished across Twin. Tony caught a few bass on topwater frogs in the weeds. They were mostly small but it was a very entertaining hour or so. The Deux Riviere was shallow and required four beaver dam pullovers. 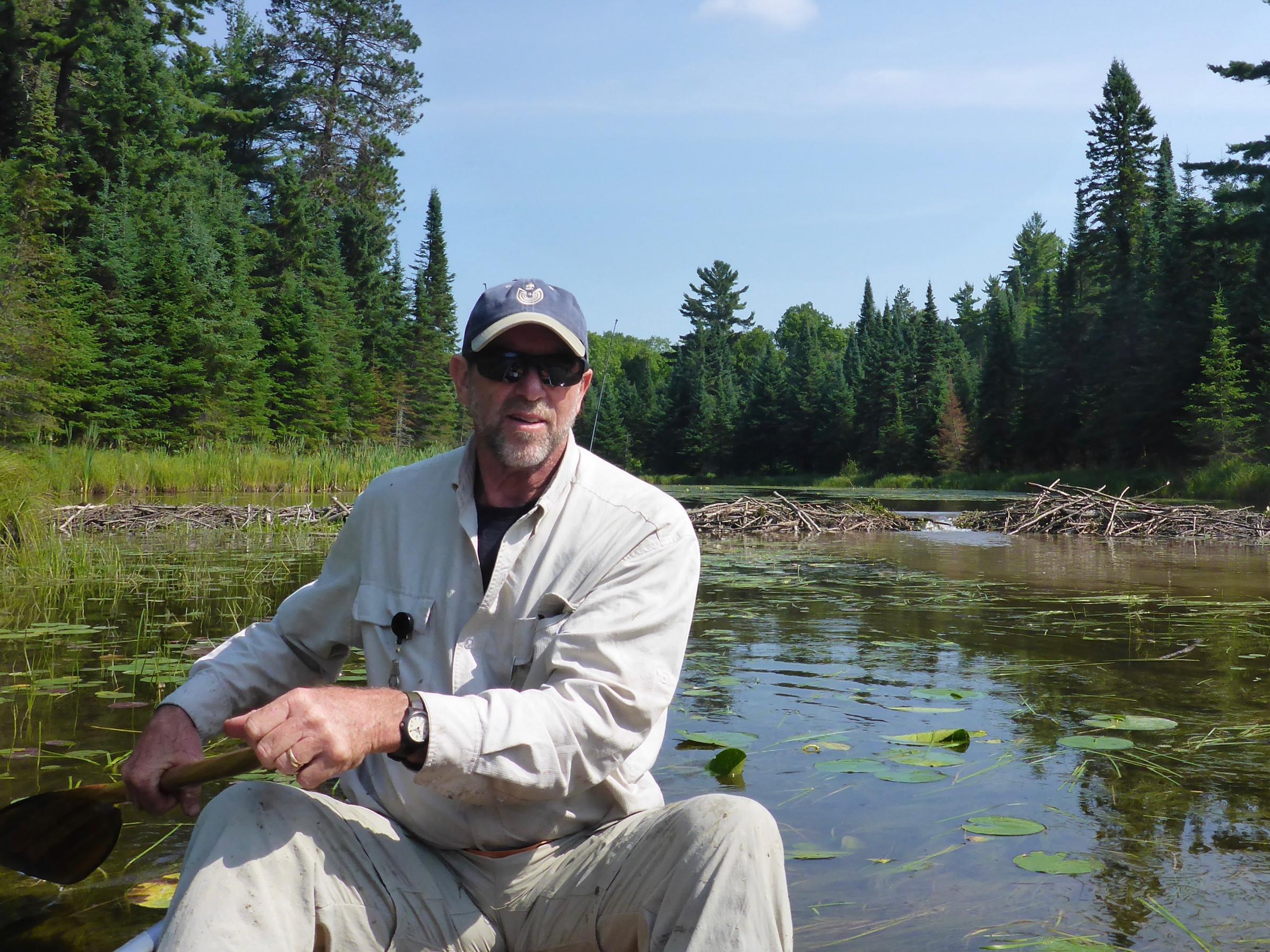 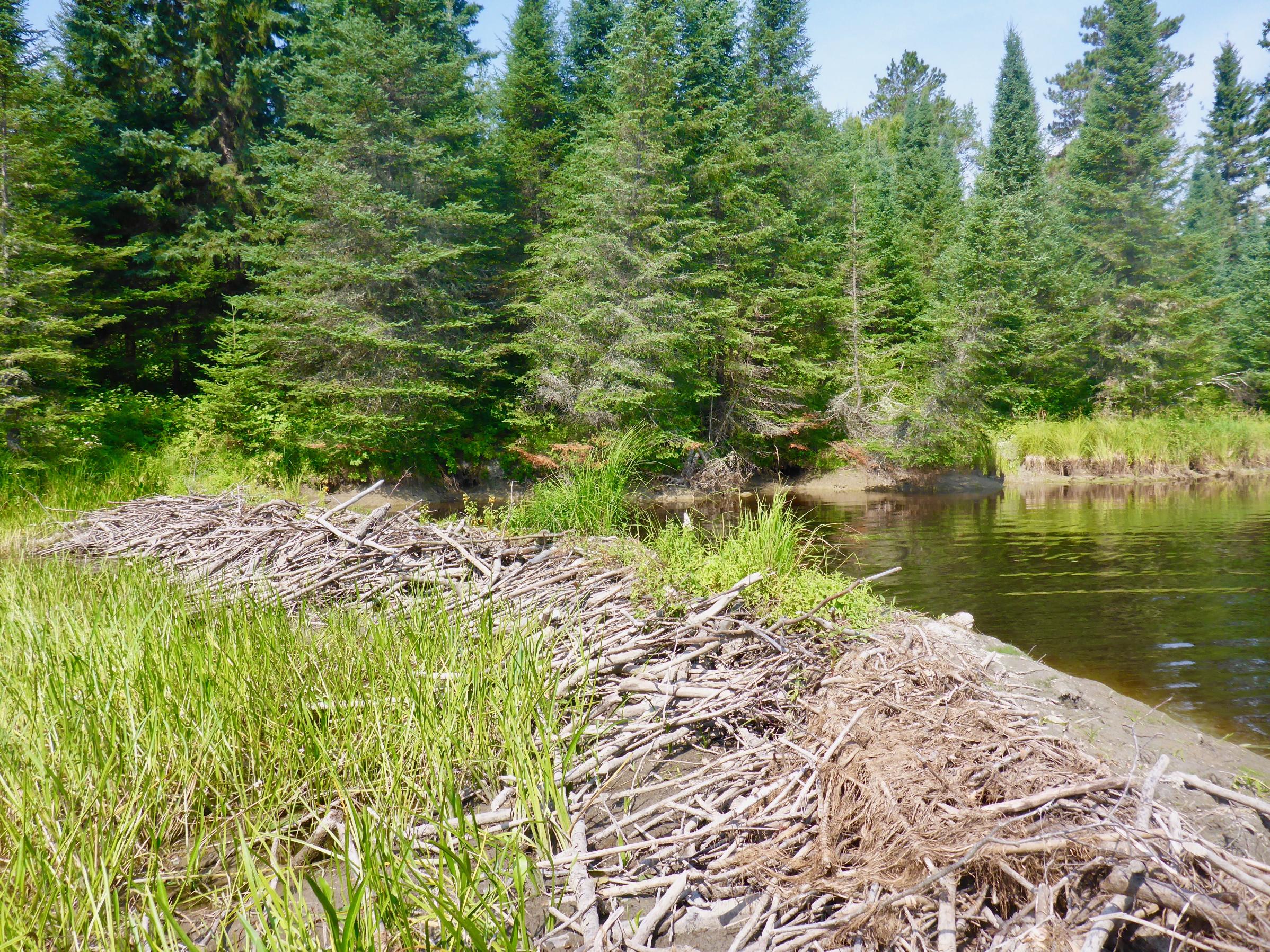 The final section, after the final beaver dam pullover, was a sea of grass about a blade length deep but navigable. We had lunch on the north end of Sturgeon watching a flotilla of young men (maybe boy sprouts) paddle toward the river chatting amicably and flying the jolly roger. Following lunch, we cruised down past Blueberry Island and through Sturgeon Narrows into a slight headwind. The afternoon was hot and we worked up quite a sweat as we made our way to our small point camp on the eastern end of Sturgeon Narrows. We pitched camp around 400pm and then headed out fishing in an attempt to rustle up some dinner. We fished in the calm heat for a couple of hours when Tony finally nabbed an eater size pike so we were allowed to head back to camp. 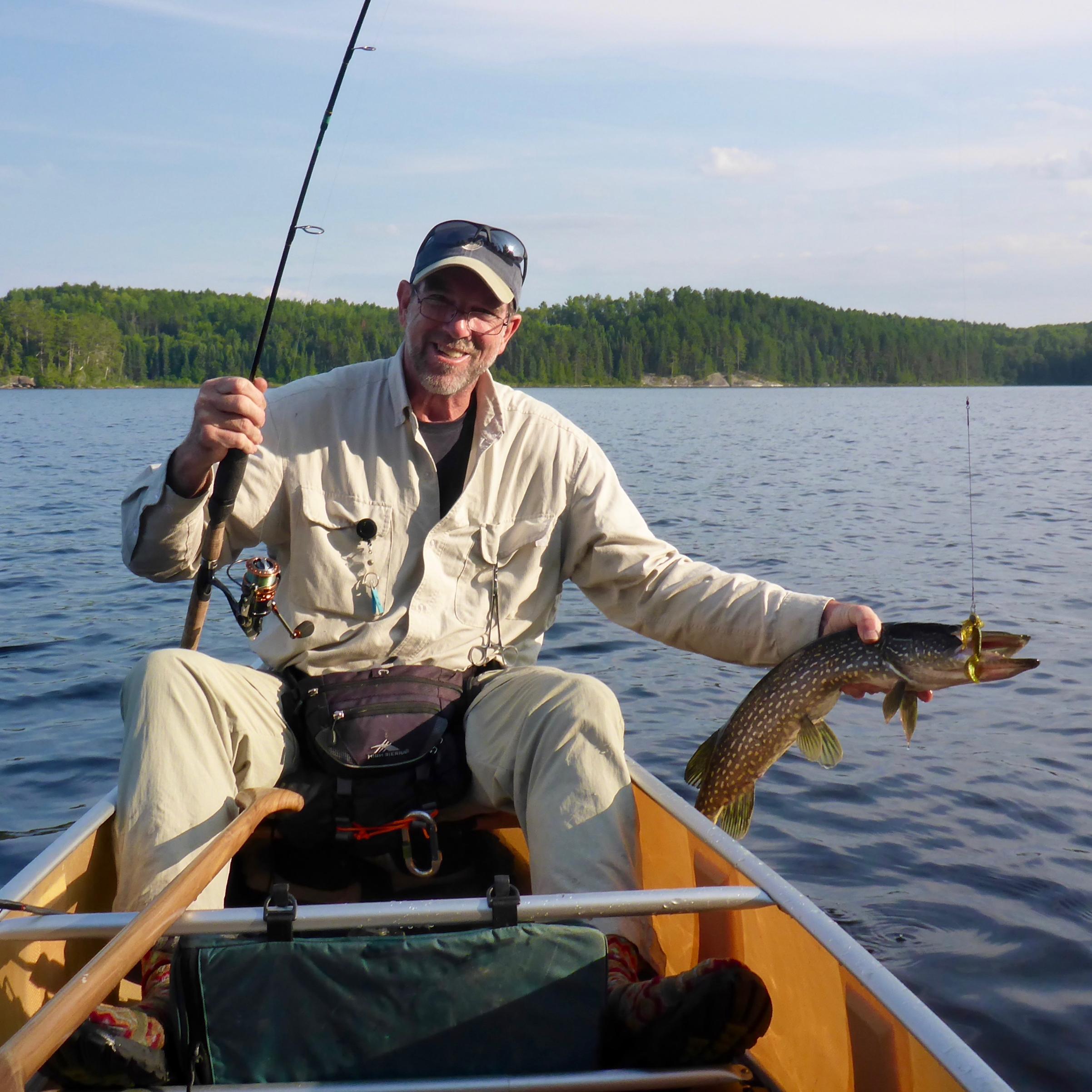 We had never eaten a pike before and had been wanting to try it. In preparation Tony had been watching youTube videos on how to filet the bony monsters, ey? Back at camp I took a quick swim and started dinner, potatoes with red onion, while Tony massacred (I mean filleted) the pike. All kidding aside, there wasn’t a bone to be found, and pan-fried in Louisiana Fish Fry it made a tasty complement to the taters. By now it was about 800pm and a stiff wind was blowing from the west. While we enjoyed the mosquito free evening immensely, we speculated what tomorrow’s weather might have in store for us (having been winded in on Sturgeon in the past.) We quickly cleaned up the dishes and battened down camp, then hit the tent as darkness enveloped us. Fell asleep listening to the wind whip through the trees. . .

A storm blew through in the night. We breakfasted on bagels and cream cheese again and launched around 900am after puttering with the fishing gear and completing a hasty search for Tony’s sunglasses. (Lesson Learned: Never wear your sunglasses on your head during your morning nature walk.) We moved along between the eastern islands catching and releasing bass and a couple of pike, one quite large. I finally landed my first fish of the trip and was quite relieved. Now the fishing was on! 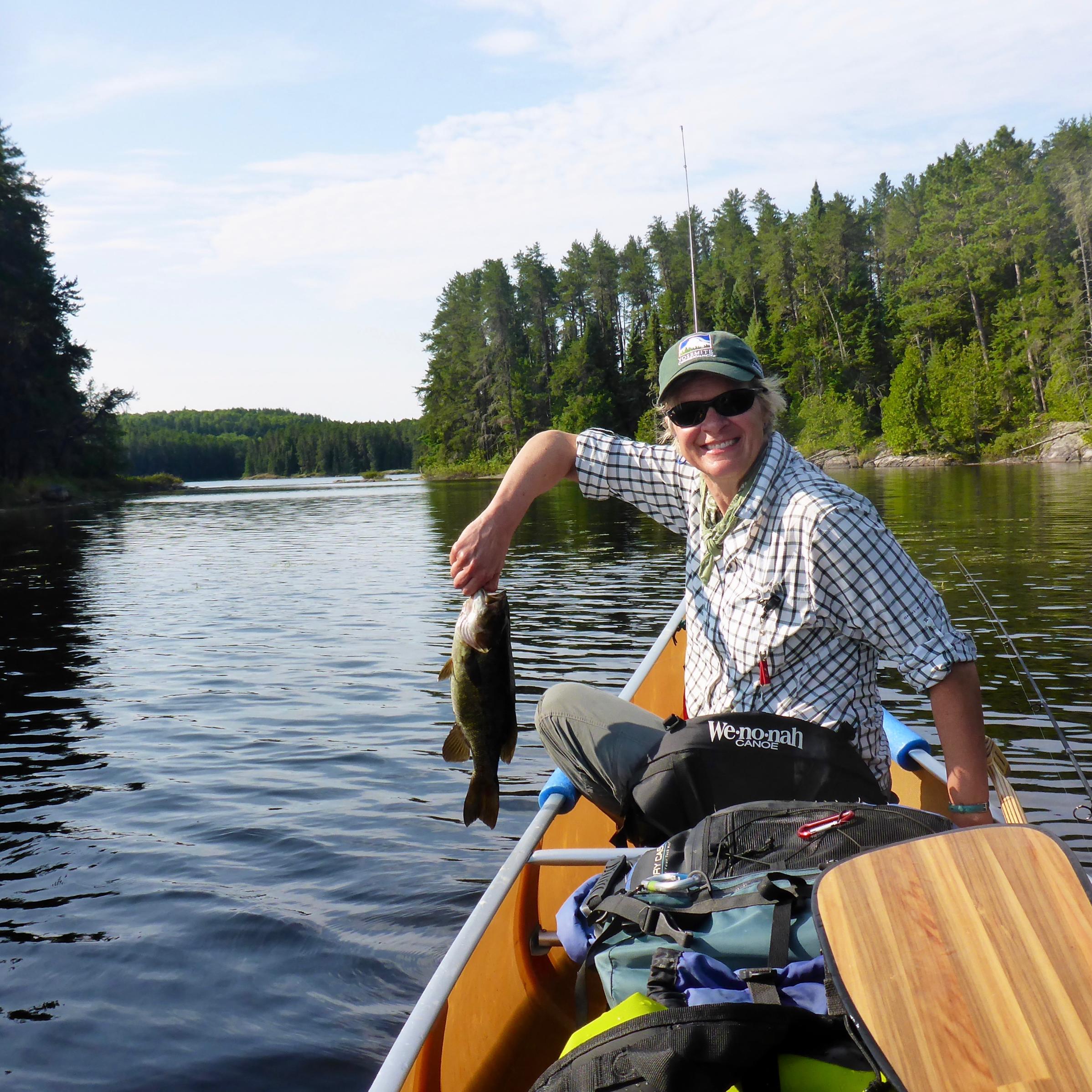 We paddled past the Best Campsite in the Quetico (BCintheQ) but didn’t stop as there was a small party (2 boats) enjoying the sandy spit. We paddled westward to Walleye Islands near the southern Smallmouth Bass Bay where we lunched with an eagle. Shortly thereafter I grabbed a nice sized bass on a green pumpkin tube bait. This excited me as I had been watching tube bait how-to videos on the internet and brought a few along on this trip to try, so I was feeling kinda accomplished. Whatever, I’m easily entertained. . . The cloud cover thickened and the wind switched as we hit the western end of Sturgeon. We quickly set up camp on the eastern end of a small island. 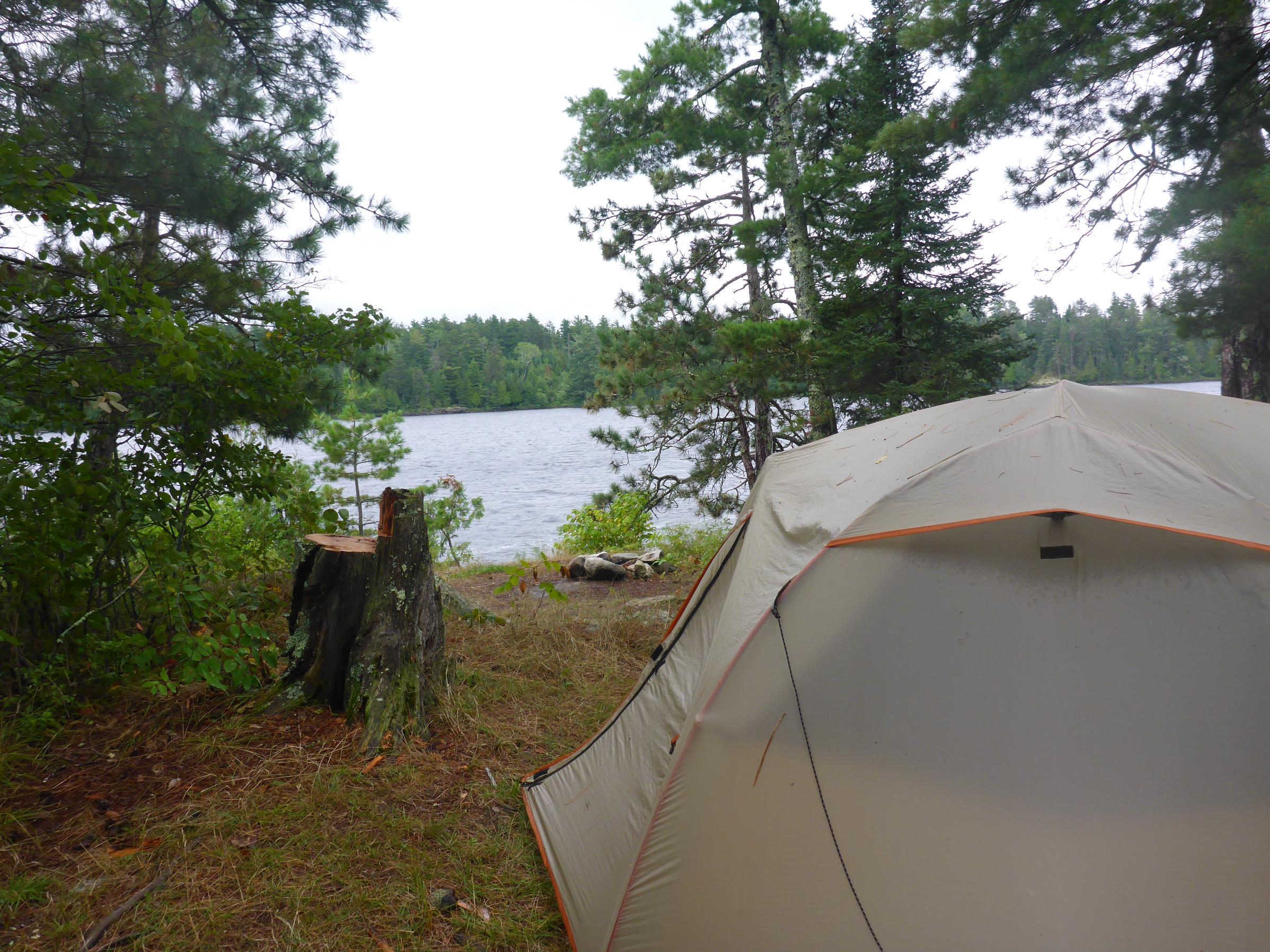 Tony napped in preparation for a later fishing excursion. About 400pm we loaded up the boat and went fishing in the wind. I immediately caught the world’s smallest walleye (palm sized) between the backside of our island and another smaller island that sported a small camp for one tent. (No real place for hygiene related activities however.) Tony caught a few eater size walleye and kept one for dinner. I lost a nice one at the boat. We fished toward Bentpine Creek with a stiff wind at our backs, past a camp of nudists parading their wares for all to see. These guys waited for us to drift by and then gave us the Full Monty. Hmmm. . . We fished back to camp. I hooked a couple of nice walleye behind our island camp but failed to boat them. Rain chased us back to the tarp around 630pm. Tony filleted the fish while I prepared a yellow curry with carrots and rice for our treasured walleye. 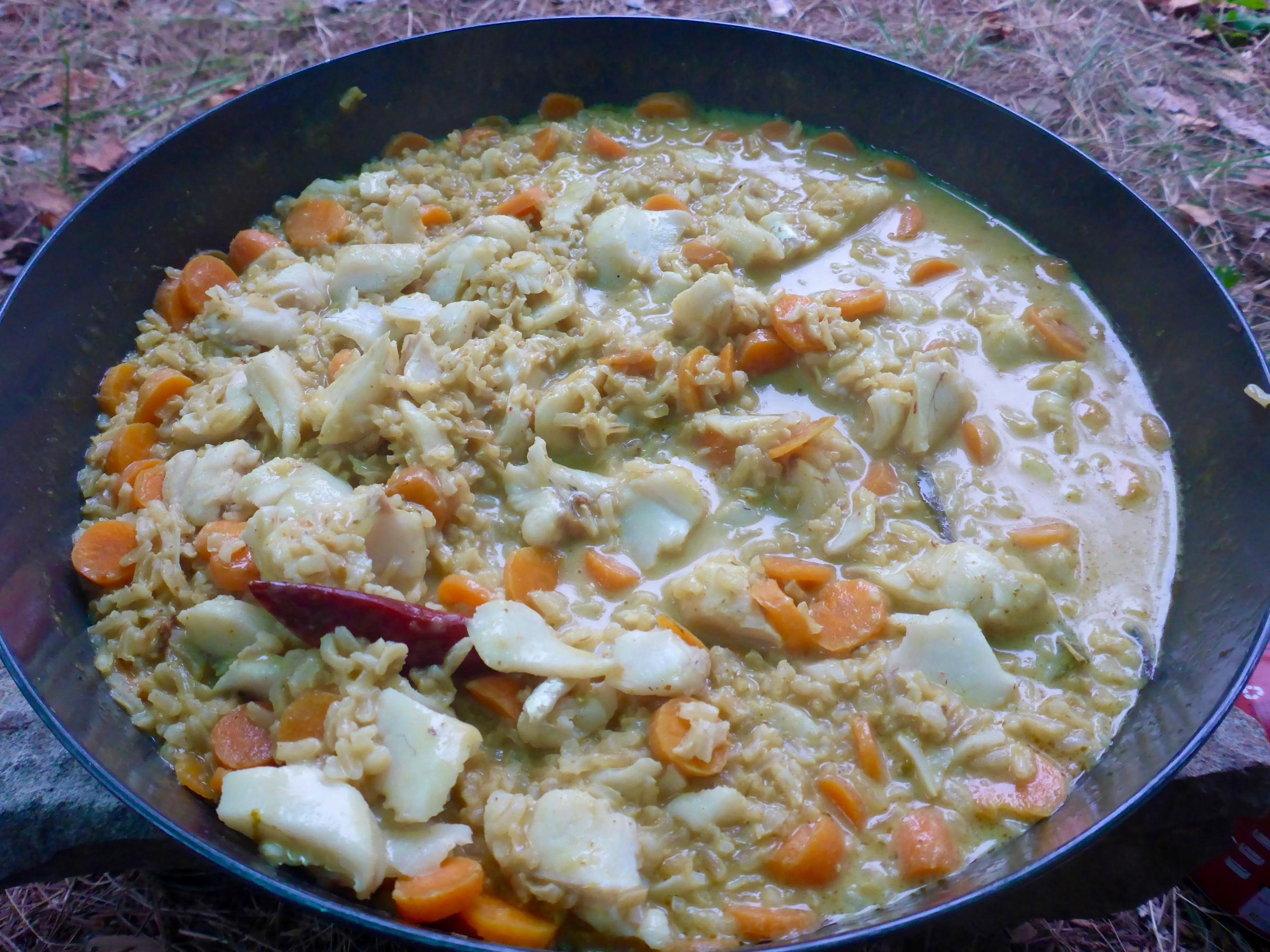 It looked like a lot of food but in the end we ate it all, then cleaned up in the rain and retired to the tent for some gin rummy. Seems to be raining harder. . .