The next morning was darn cold; intricate ice crystals had formed in the water with my leeches overnight. In order to warm myself up, some paddling seemed in order. Just a little distance down the shoreline, a 19-inch lake trout struck my chartreuse shad rap. That trout- while large for one guy to eat- made a splendid breakfast after it was roasted over a campfire, right on the fire grate. In fact, it was the most tasty and most perfectly done trout I’ve ever had. 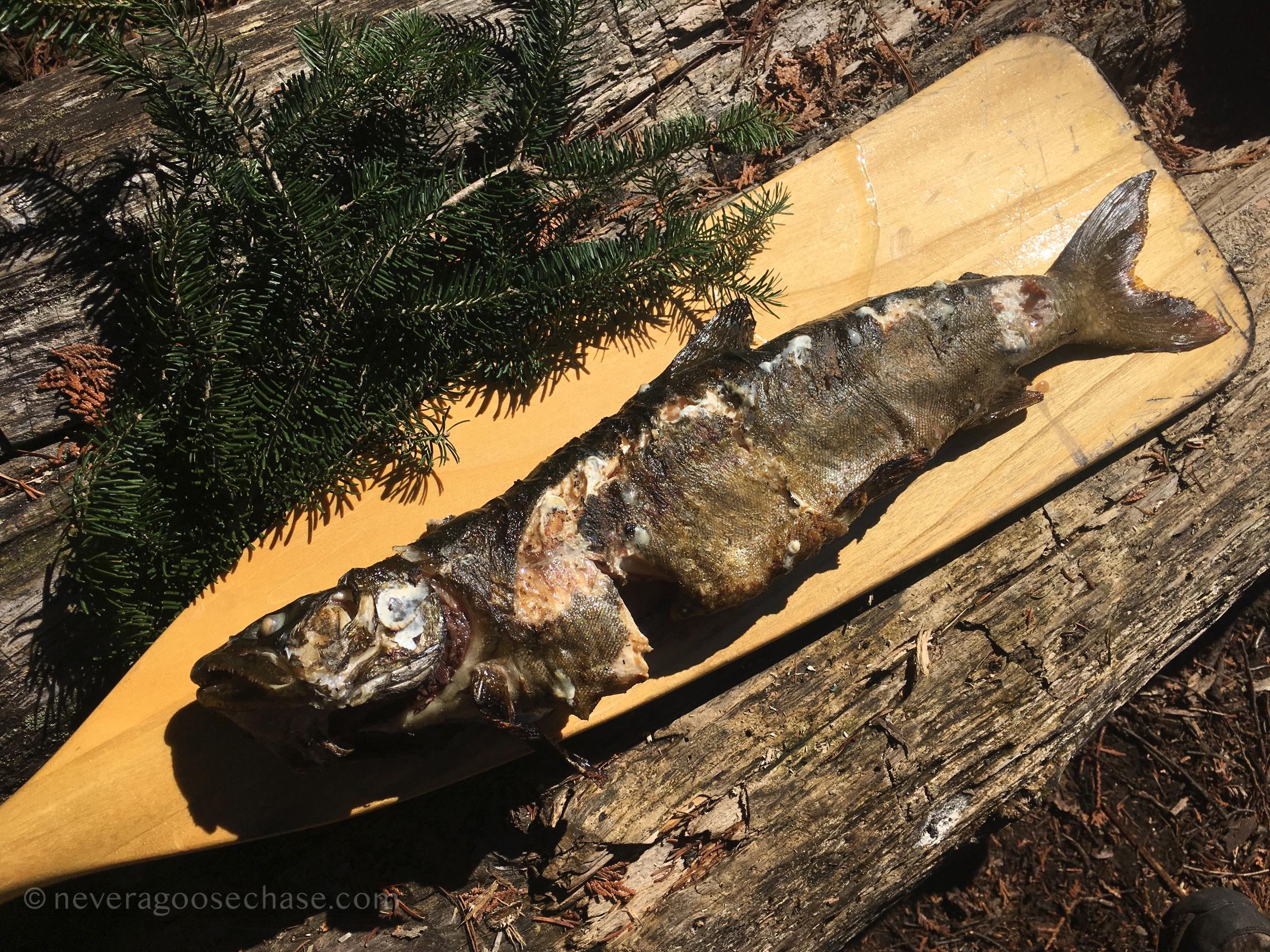 Stuffed but invigorated, I packed up camp and prepared for the long portage toward Misquah and Vista Lakes, where more lake trout and walleyes waited, respectively. Another, more massive deadfall near the beginning of the portage made me reconsider my plans. It was obvious no one had cleared the trails yet, and other roadblocks seemed inevitable. After much internal debate, I reluctantly turned around, reclaimed my campsite, and prepared for much more trout fishing.

After setting up camp, I packed up the canoe so that I might be out on the lake for the rest of the day. My first stop was on the east end of the lake, where a handsome rock outcropping promised a good view of the lake. As I coasted past the island, a human voice jolted me out of my blissful solitude. A group had landed there and was setting up camp- loudly. They were shout-talking around the entire island, and I was thoroughly irritated. I mean, I couldn't necessarily expect to have the lake to myself, but the least they could do was keep their voices down, and that's one thing they seemed incapable of. 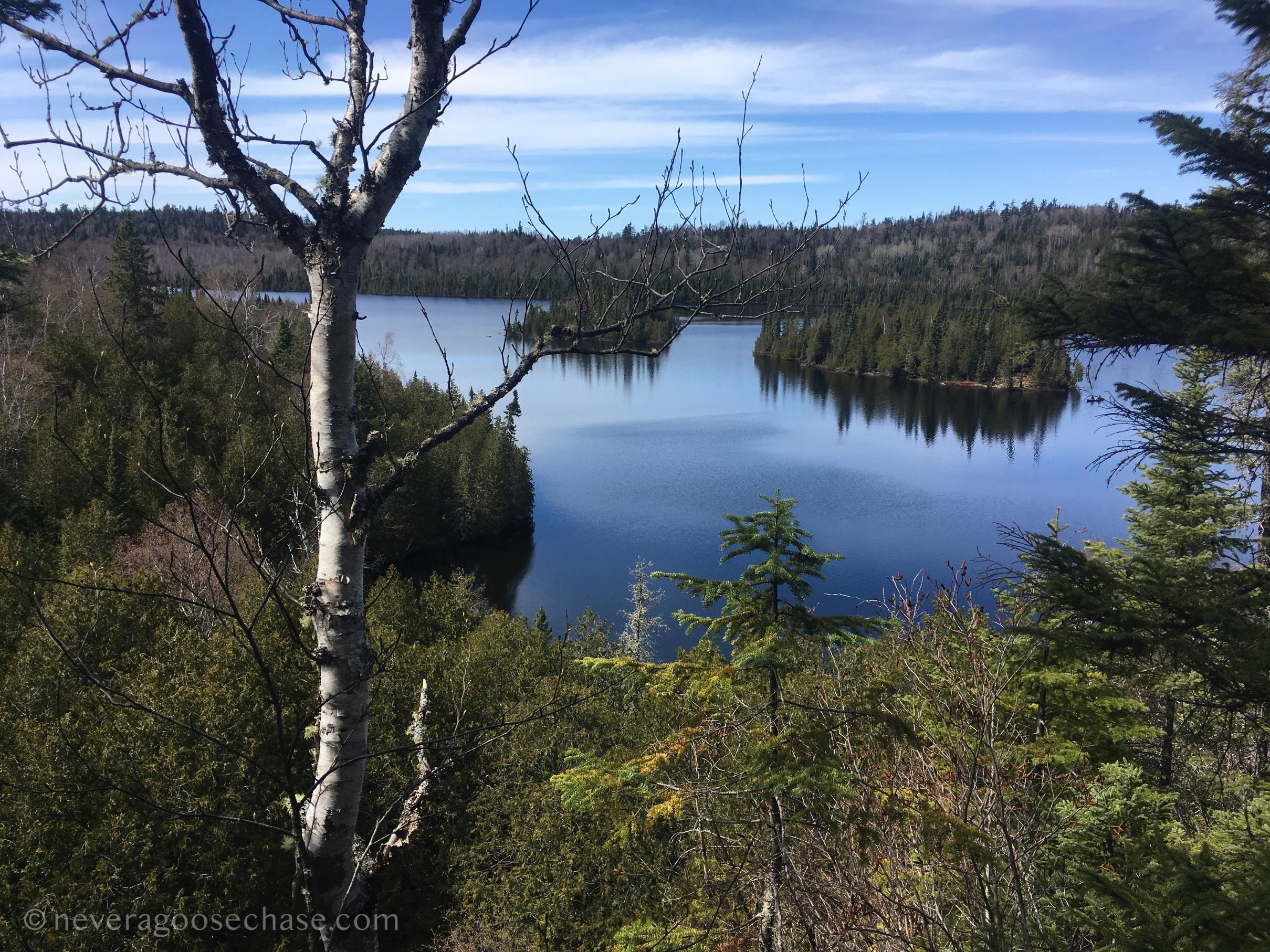 I continued to the lookout point and snapped a few pics, but my balloon was deflated. By the time I got back down to the canoe, the six of them were scattered around the lake in their three canoes. I commenced fishing, all the while trying to avoid them as they circled the lake's shoreline. Their voices could frequently be heard, both as one paddler talked to the other, and also as one canoe called out to another. I wasn't completely sure they even knew I was there, and I was getting really peeved.

That afternoon another trout impaled itself on my lure, this time a blade bait pulled behind the canoe over deeper water. It was a smaller specimen, but the prospect of catching and eating my limit of lake trout in one day was a new and irresistible milestone. I steered toward my campsite, and as it happened, I coasted in just as one of the other canoes passed by. "YOU CATCHIN MUCH?" one of them called out. I did not respond vocally. I looked his way, then made a hand gesture that suggested I'd had a little success. This seemed to get the message across that I wasn't enthused about talking. I didn't hear their voices for the rest of the day. 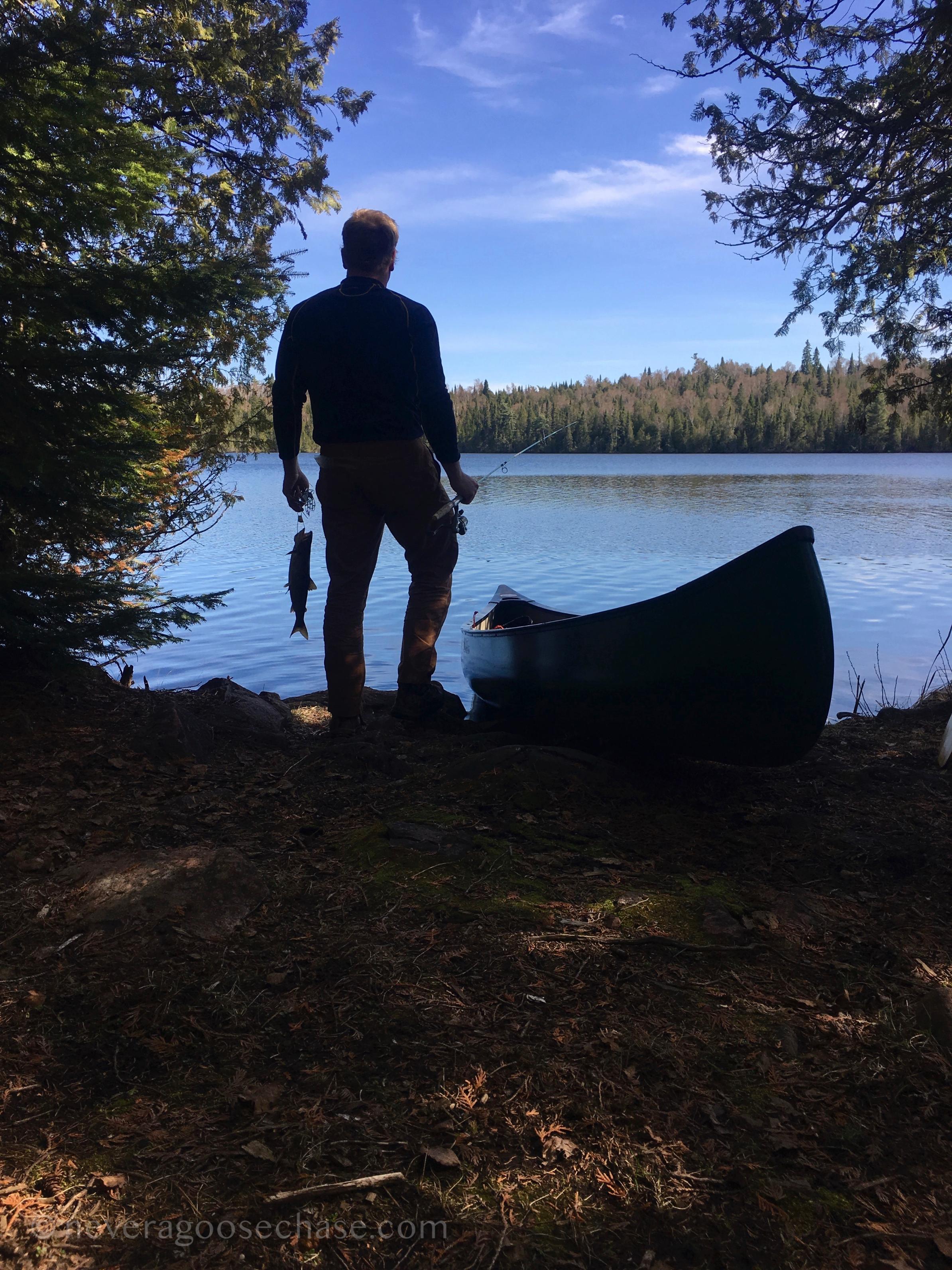 That second trout was fried over another campfire. Mine was simply fried in the pan with the skin down, like a sunny side up egg. It was...okay. I suspect those who try lake trout and say it wasn't good probably tried to bread and fry it like walleye or something. In retrospect, I wish I’d brought tin foil to bake it in with perhaps onions and/or potatoes. But since I’d anticipated frying walleye over the fire, tin foil had been left behind in the interest of simplicity. We live and learn, and next time I'll probably opt for roasting again.

Thoroughly satisfied, I spent the evening in the campsite. It occurred to me I could still fish even though I couldn’t keep, so in an impromptu experiment I rigged up a slip bobber and tossed one of the leeches I’d planned to offer the walleyes into about 5 feet of water. Sure enough, in the waning minutes of daylight, the bobber bobbed and I set the hook on the biggest trout of the trip: a gorgeous 21-incher. The icing on the cake was the fact that it was caught on an old fiberglass rod of Grandpa’s, on the eve of his birthday. A memorable sunset capped off what I call a “one-percent day.”