ER Nurses in BWCA
by GearGuy

Trip Type: Paddling Canoe
Entry Date: 06/10/2019
Entry & Exit Point: Stuart River (EP 19)
Number of Days: 6
Group Size: 7
Trip Introduction:
As the group leader it was my 7th trip up to the BWCA. This year fishing was one of my top priorities. Last year my wife and I went out for 5 days as well and did horribly despite a solid effort, this year I was determined. I chose an entry point that I had read for months wouldnt let us down in the fishing department, EP 19 Stuart River to Iron Lake. I had read wed catch eater sized walleye all day on Stuart and that the sky was the limit on Iron. I brought along 5 coworkers and a friend of mine, only 1 other person had any experience in the BWCA and it was when they were a kid. For this trip I did all of the food planning, food prep, and we primarily used my gear so as not to bring too much on everyones first trip. I made my own homemade recipes as well as store bought food, and dehydrated and vacuum sealed all of the food for this trip to save space and weight. I know Stuart River can be a difficult entry point, especially for people new to the BWCA, however all of the guys coming on this trip are physially fit, were level headed and intelligent people, and I spent a lot of time educating them on what the trip would consist of, including 4 miles on foot alone. "4.6 MILES ON ****ING FOOT" I'd say to them in texts, over and over again, so they knew for sure what they were getting into. All accepted the challenge happily, and I can't speak for them but I think they all rose to the occasion with energy to spare.
Discuss Trip: View Discussion Thread (14 messages)
Day 1 of 6
Monday - The “Long Day”

Living in the Twin Cities I’ve always just left home around 2:00am to arrive at my outfitter to pick up my canoe, and then mosey onto my entry point, paddle in like 6-7 hours and then setup camp. I call it the “long day”, it’s useful for many reasons, most important being that it helps reset my schedule to “BWCA” time, I fall asleep good that night, none of the sounds wake me up, and I wake up early ready to get going on whatever we’re doing. Anyways, the guys didn’t care too much for the “long day” and I got lots of gripes. 4 of us left the Twin Cities around 130am and enjoyed one of those good “hype up” drives over the next 4.5 hours, talking about all the stuff we’d like to do, fishing tactics we’re going to use, what we’re going to do, game planning, it was a good drive. We got to the outfitter, Spirit of the Wilderness in Ely at about 0515….Whoops, plenty of time to change and situate before they open I guess. We had to pack the bear vault, and a couple food packs in someone else’s backpack, which got done quickly, we changed, got into the right clothes to minimize time at the buggier entry point, then the other group shows up, and we finish off our tasks in time to stand around for 15 minutes waiting for them to open. Good timing I’d say.

The outfitter opened, seemed like they were slower than other outfitters in getting going and getting us out of there, but I didn’t complain and we got on our way at about 0650. The other group had low fuel, and it’d had been a few years since I have been on the Echo trail, so when they asked if they should get gas before we go, I said “Oh it’s only 20 minutes away” HAH! About 10 minutes into that dirt road I remembered “Oh yea! This is one long ass road”. We’d be fine, I shrugged it off and we flew down the road to our entry point listening to the most perfectly matching classical music (only radio station out there that morning). Was going so fast we missed the entry point, eventually we drove over the Moose river bridge where I had been before I then it hit me “Yup, went too far”, the car desperately needing gas LOVED that part. Finally, we get to our entry point at Stuart River, pull in and it’s all good spirits after that. We were finally there, after months and months slogging through work and waiting for this trip, we were there. We slowly got our canoes off, our gear out and stowed appropriately, and as I’m packing my wallet I notice someone in my group carrying his backpack on his back, and his partners backpack on his front, I wondered if they were serious. I asked and he said “well how is he going to carry the canoe?” to which I reply “He’s gonna carry it with a backpack on, it’s easy”. They both look at me with a perplexed look, I confidentially say “give me 3 minutes, I’ll show you how it’s done”. I may not have known my coworkers as close friends before this trip, but I damn sure knew they were athletic and could handle what was coming on this particular entry point. They didn’t know they could handle it, I did. After about 3 portages they had it down, and were taking no longer than 2-5 minutes to exit and enter the water, single portaging. I was proud. Anyways, so I put my stuff away, threw on my CCS Pioneer, asked for help “balancing the boat” as I threw it on my shoulders (not necessary but nice if someone’s there to help you), once it was on my shoulders off I went. I yelled back “Lock the truck!” and off I went, must have knocked out a 1.25 miles before I got the canoe down for a breather and sip of water. The other guys were a ways back, but they quickly caught up. 1st one sucked hard, but it was over soon enough and we were soon paddling down the Stuart River. One fella’s military boot that he had been to Iraq and back in finally died on this portage in. The sole came unglued from the shoe and he had a talking shoe the rest of the portage. Home to at least 5 beaver dams, one of them being 4.5’+ in height, I was nervous of the guys using improper technique to get over the dams, and hurting the Kevlar canoes, or falling in themselves. Neither happened, they’re a very intuitive bunch and it was a pleasure not having to worry about them doing what I wouldn’t do. The one set of guys were leaving us in the dust, and flying over the shallow water obstacles and dams with such ease it left me in awe. I know who I’ll ask to go again.

Finally, after a day that seemed to take longer than it actually did, we were on Stuart at around 12:30pm. We made great time, the original plan was to shoot for Iron the first day, but I stopped talking about that plan halfway through the 1st portage out of the EP because I didn’t know how realistic that actually was for this group. Physically it’d have been no problem, we were still fresh at Stuart even though they felt tired and winded, we could have easily taken the hell of a portage out of Stuart into Fox, but for the sake of our morale we stayed at Stuart. It was a good move. We had the island campsite, though it was apparent we were on the lake alone and could have taken any site, we settled on the closest to us as we got on the lake. We set up our stuff, unpacked things in the sun, the occasional cloud came overhead to give us a little bit of shade, it was the perfect weather. We only got sprinkled on once for about 10 minutes that day and that was it. Weather forecast was a lot more foreboding. The guys were anxious to get onto some fish. 3 of them went out in the 3 person canoe and under the lead of my good friend whom I call “The Pike Guy” they went around to all the spots that look good on the surface, shallow bays with weeds, rocky cliffs, rocky points, all those spots that I usually have the most dependable luck with Pike and Smallmouth, and they only caught a couple small pike that got thrown back. Prior to this trip I praised day and night the Slip Bobber, and not to bring much fishing stuff, it wouldn’t be needed. They get back, we talk for a little bit and they decide to go back out. I had read on the forums that you can always catch eater walleye out of the falls, and so I sent them that way with a bucket of leeches while I stayed back and set up camp and the kitchen, we fished off shore and did pretty well from our campsite! I think we had caught 4-5 walleye right there which was really exciting. Love getting into them on your own campsite. The guys took a while to get back…And when they did, the Pike Guy says “Nah we didn’t get any fish, I think I broke your rod”. I remember rolling my eyes as if I’d expected this of my borrowed rod, they pulled up the canoe and got out and I came over the investigate my rod and found a half a dozen walleye in the bottom of the canoe. Pike Guy got me so good on that one.

While the guys vied over who could produce the cleanest fillet (which was great cause I didn’t have to clean anything) I set out to hang the bear rope, a task that has come to be a time of great reflection over the day for me as I search the trees for a good branch. No more than a few throws to get it exactly where I wanted it, it was a good day. For dinner we had breaded walleye, mashed potatoes and gravy, and fish tacos with rehydrated salsa. It was a hit, I can’t believe I haven’t done fish tacos before. We talked about what we’d do the next day, we all had some drinks, which hit way harder when you haven’t really eaten all day and are super sleep deprived! Next time I’ll remember that. The sky was clear that night, the moon ever waxing and seemly brighter than ever wasn’t letting us see too many of the stars but there were obviously more than the light pollution of the cities lets you see. From the minute we got to camp, to the minute we hit the hay, we kept our fire stoked and burning hot as symbol of our unwavering high morale. Whoever pitched the tent put a rood under my hip, but other than that it couldn’t have been a better day. 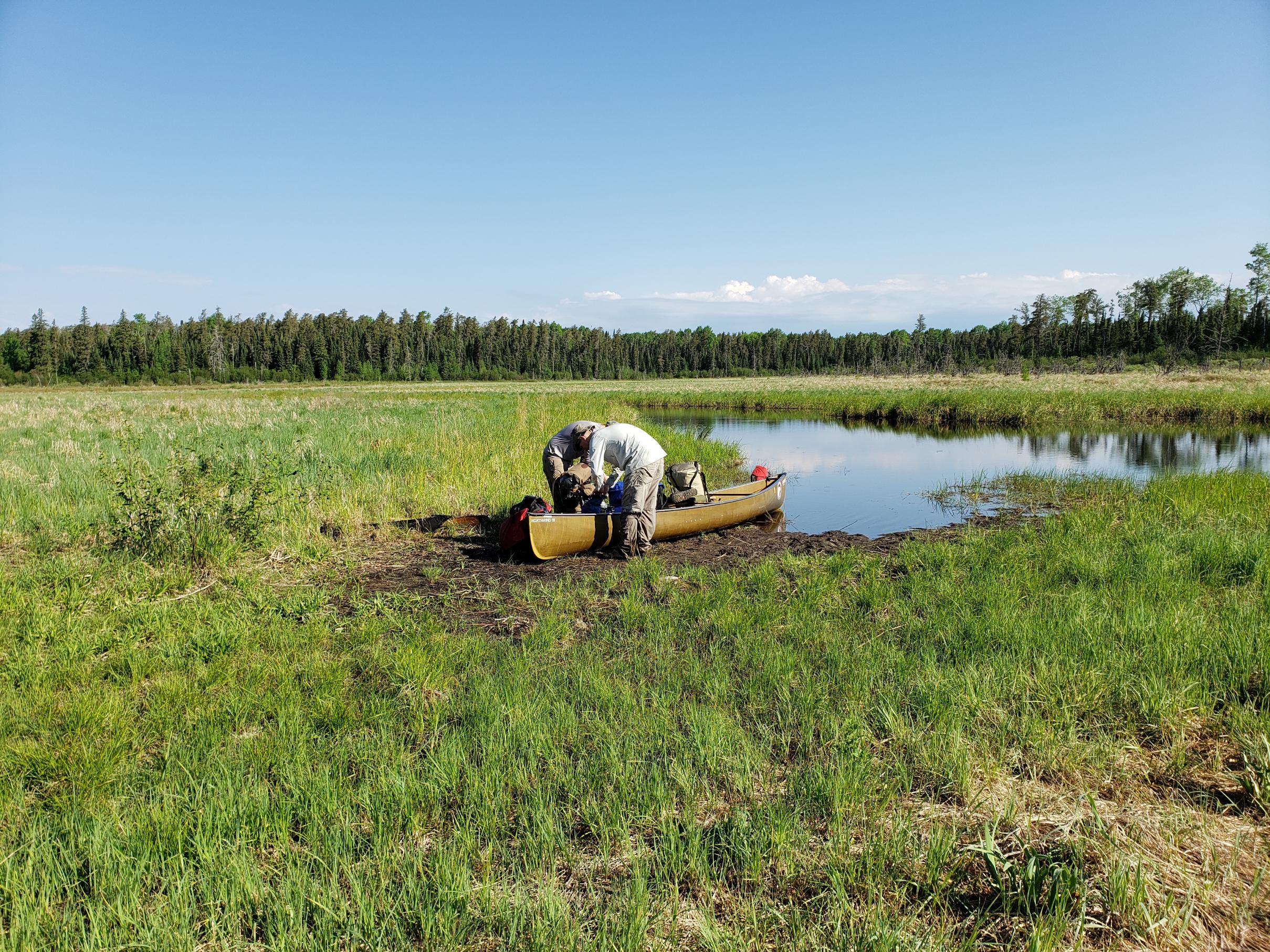 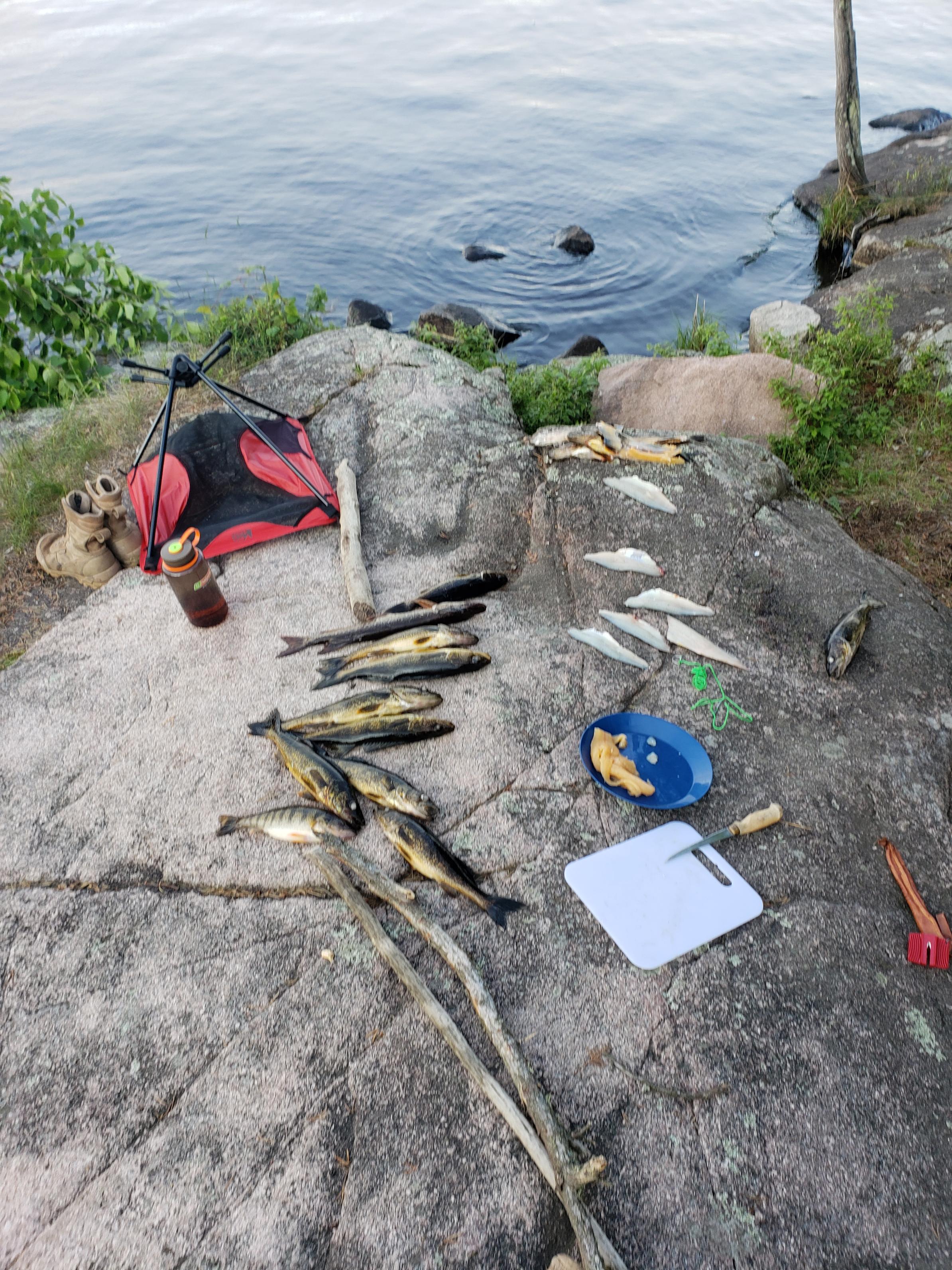 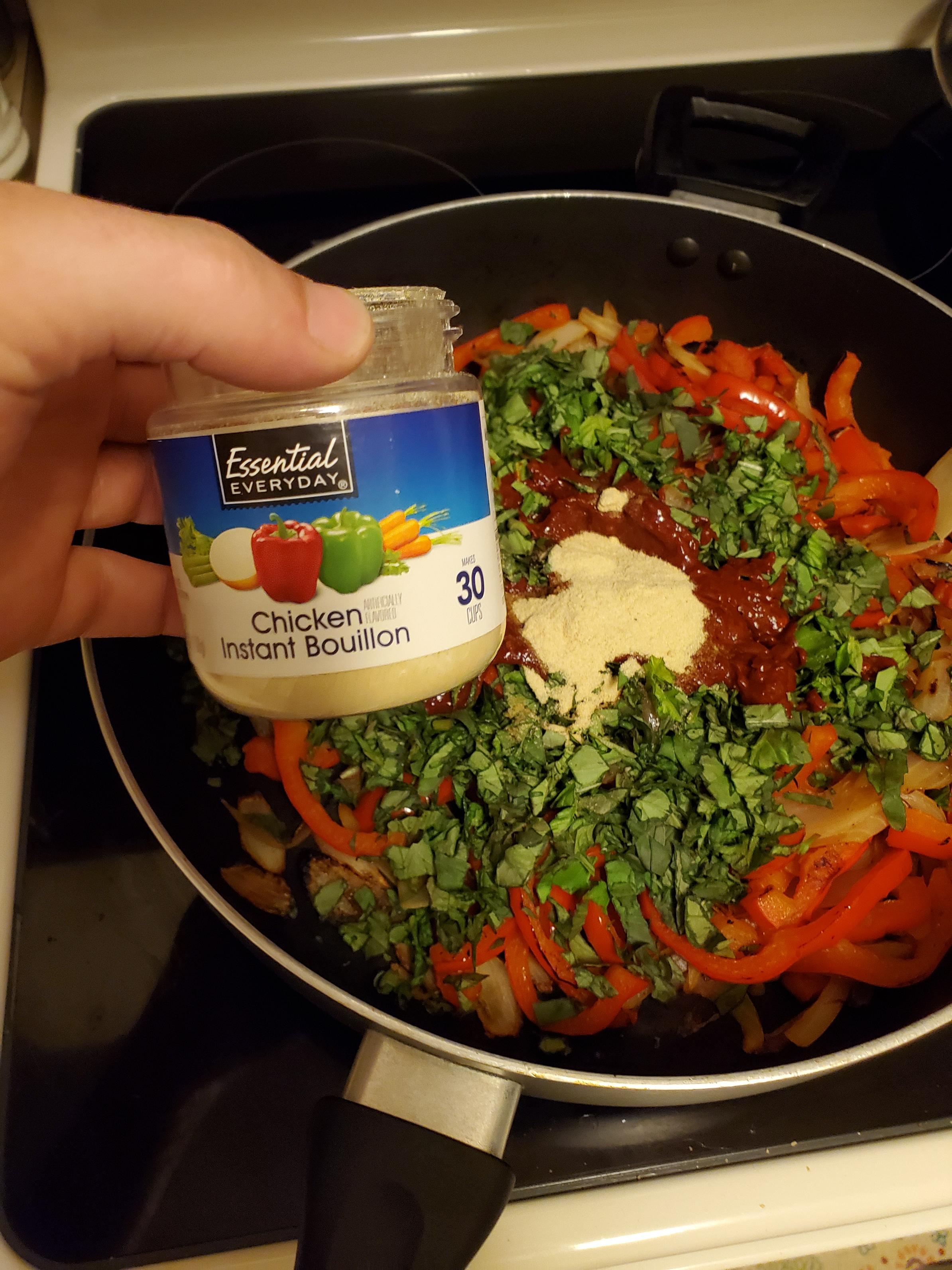 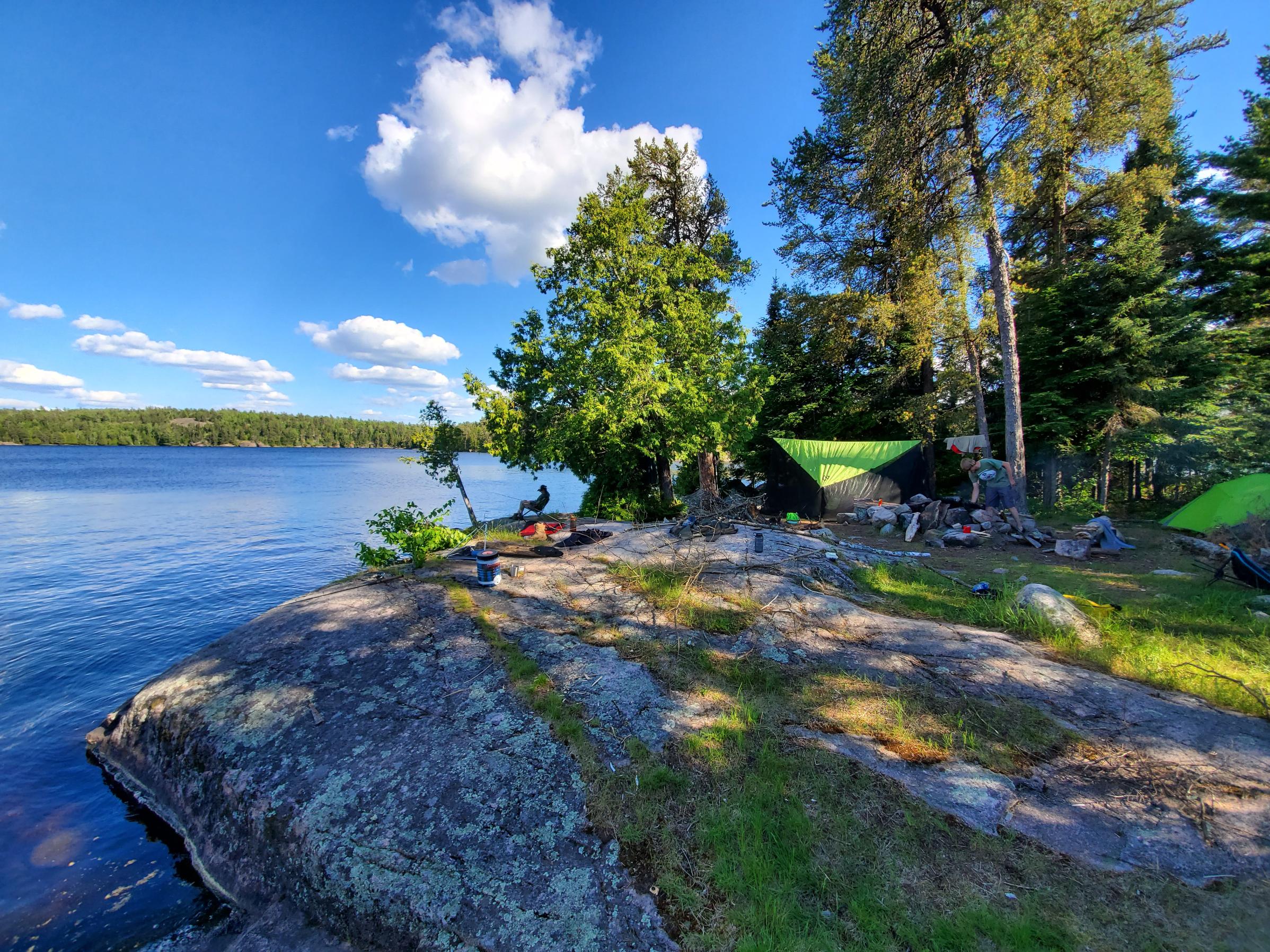 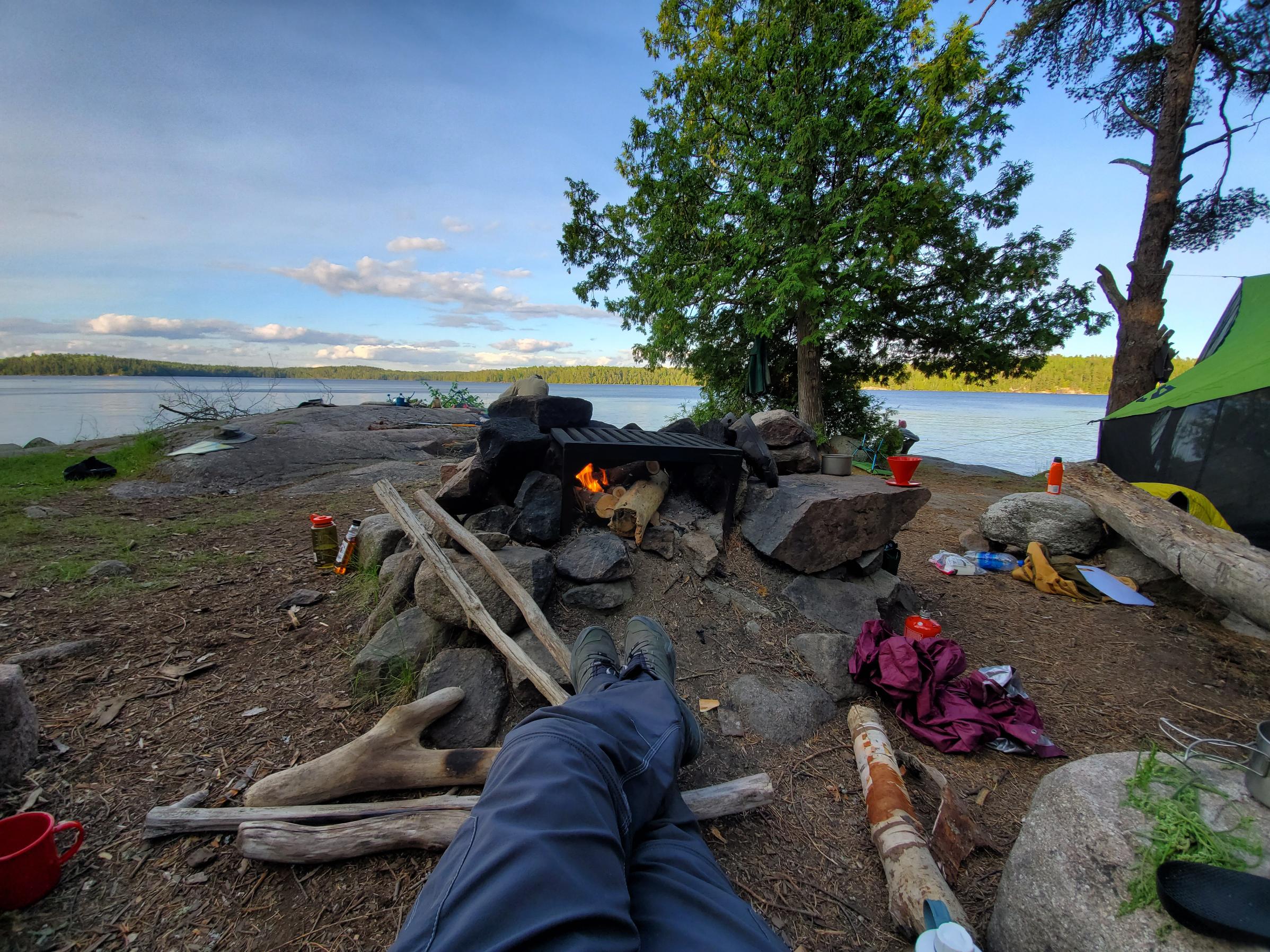