As the PMA Turns: A Daytime Drama in 10 acts
by straighthairedcurly

Trip Type: Paddling Canoe
Entry Date: 08/10/2019
Entry & Exit Point: Missing Link Lake (EP 51)
Number of Days: 8
Group Size: 4
Trip Introduction:
Note: visit the discussion thread for some video links of the bushwhacks. I get obsessed sometimes and I have been obsessed with trying a Primitive Management Area since first hearing about them a few years back. This is our adventure in 9 acts. Cast of characters: Me: A 55 year school teacher and mom who 6 months ago was in the extremely obese category and very out of shape. But I dropped 50 pounds and whipped myself into shape in order to try this PMA trip. Stew: My 66 year old hubby who married me because of my sense of adventure. Keeps himself in good shape...or so he thought. Joey: Our 15 year old wilderness loving son who was fresh off 1 week backpacking in the Beartooths and 3 weeks canoeing in the Quetico. Jose: A 60 something friend visiting from Costa Rica. Overweight, but in decent condition from hiking lots of vertical trails in his native country. Unable to swim and rather afraid of water, but a strong sense of adventure. Plan A: Enter at Missing Link, drop into the Hairy Lake PMA from Copper Lake and come out of it at Octopus Lake, then follow the Frost River to Mora, Gillis, and eventually come out at Brant. I said that was Plan A...
Discuss Trip: View Discussion Thread (17 messages)
Part 1 of 10
ACT 1: Pre-trip prep

Read, research, update gear, plan, plan, plan. That was me since last December. Originally the trip was just for my husband, son, and I. But then our friend from Costa Rica was able to get a visa and suddenly his trip to MN coincided with our (or should I say my) carefully laid plans. So adjust we did. Found gear for him to use, increased the food quantities, borrowed another canoe. One problem when he arrived. He has never learned to swim and is afraid of the water. He arrived only about 5 days before we were due to leave so we got him out in the canoe everyday and I insisted that he practice swamping a canoe, just in case. He HATED that part, but it was good motivation for him to stay upright during the trip.

Despite all my prep work, Stew and I were still up until 12:30 a.m. setting up the canoe rack extenders to be able to carry the second canoe. Still managed to get on the road by 8:20 a.m.

We had a late breakfast in Barnum at the Lazy Bear (our favorite restaurant), and on to Grand Marais. We picked up our regular permit and our PMA permit at the Grand Marais Ranger Station, and then puttered about town before having dinner at Hungry Jack Lodge and spending the night at Camp Menogyn. Boy, did I feel old seeing my long trip paddles from my camper and guiding days are now on the 2nd row from the bottom with 5 rows of paddles above them. The years fly by fast apparently. 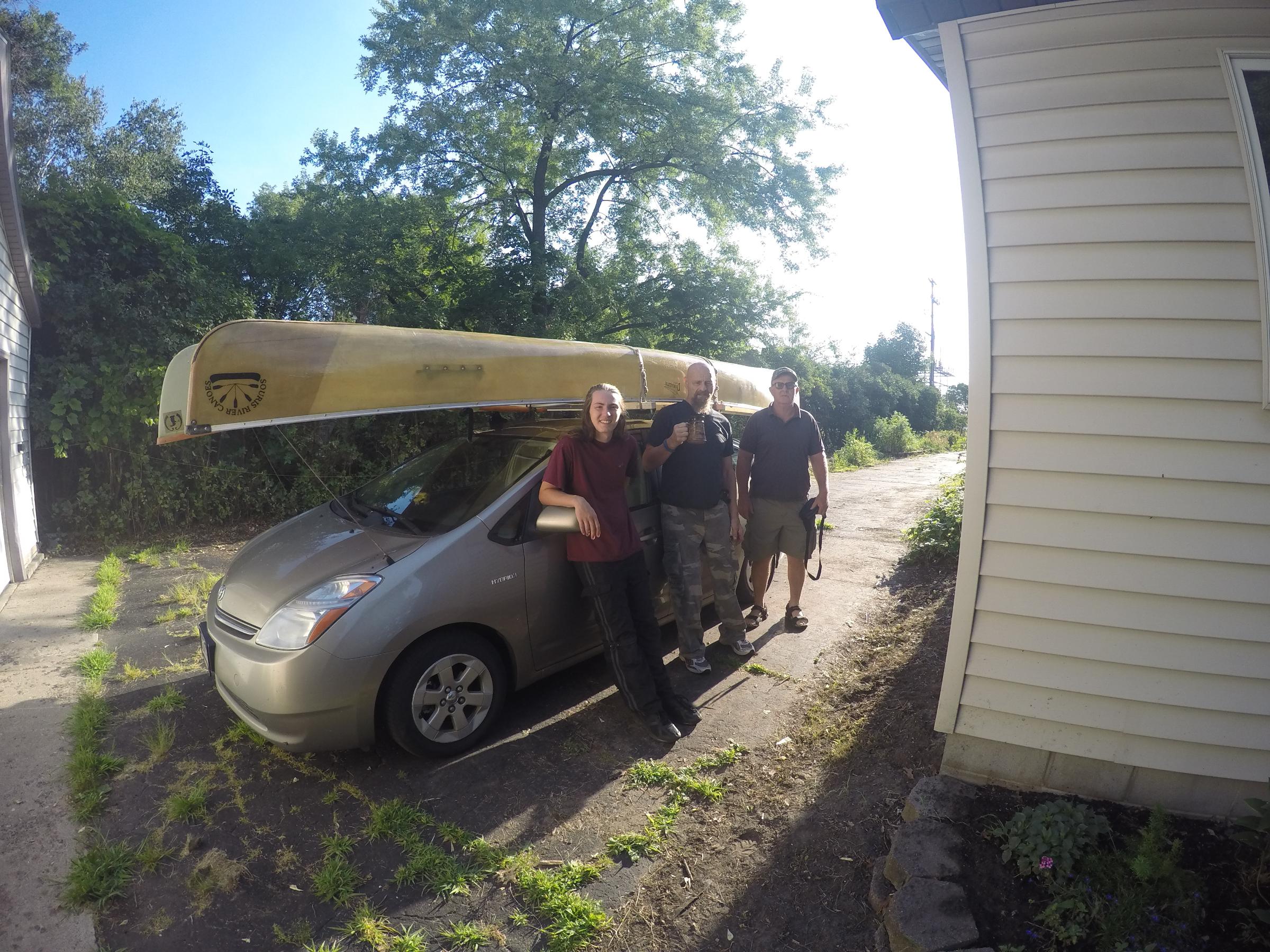