I am not afraid to admit I prefer my pillow top mattress to my thermarest. But I prefer the wilderness to my bedroom so it comes out even. I envy those who can plop down in a tent and sleep the night through. I am not one of them, but I enjoyed it nonetheless. Strangely, I didn't hear many night sounds. No owls and few loons that first night. Not even the rustling of a pine squirrel or curious racoon. Or maybe I slept better than I thought.

Awakening at dawn, the lake was my own as my neighbors slept (it off maybe?). My favorite paddling time is at dawn or dusk, when the water is like molten glass silently cleaved by canoe. I like to paddle into the mist, relishing a lack of purpose or pursuit. Well, until I want fish.

Although I didn't look hard, I didn't see a lot of fish spots on Vern. I had intended to paddle up the Vern river, where I heard there are some decent spots. I only found one small smallie near my site, not enough to even bother with. Now I love me a fish breakfast, but lets admit it takes some time. A cliffs bar got me on the water road faster, and I knew there would be more fish in my future.

The paddle up Vern lake in the early morning was majestic. The water was still glass, and I saw no one. Scanning the banks, I saw little wildlife, but I knew my eyes had not properly adjusted from the urban tunnel.

The portage into Juno is not exactly as depicted on the McKenzie map. It shows a 65 rd which goes south of a beaver pond. This may have previously been used, but now the main route seems to be north of the pond, and then up and over a hill. In any event, a cow moose was browsing at the south end of the pond which I enjoyed for several minutes, albeit from under a canoe. The size and scale of those animals cannot be understood or understated until you are up close with one. To think that a plant diet can be converted to such musculature. Amazing. Equally amazing was the blueberry bounty, which I indulged along the portage route.

I got onto Juno about 9 or 10 am, and had to make a decision. Should I try to grab one of the three sites on Juno, or push onto Brule. Considerations:

* From what I had read and from the looks of the depth and shoreline, Juno didn't appear too fishy

* The wind was beginning to pick up, which meant it could be getting rough on Brule * It was Saturday and Brule was probably pretty full up with weekenders as you there are no portages to access it. I may have to work to find a site, which mean potentially traversing rough waves * This was supposed to be a leisure trip.

So I pushed eastward on Juno, encountering no other paddlers. The first two sites were ok, but not the best. The most eastern was better, so I decided to park it there. A little shade and a good tent pad and a place for my hammock. I didn't need the Ritz.

I got settled in, ate some canned sardines and sausage and cheese, read (Cormac McCarthy) napped a bit in the hammock, swam and contemplated the latrine. Then I decided it was time to do some exploring.

The creek to access Whip and Squire lake is just southeast of my site, so I figured I would take a look. The creek was navigable up to where it splits off to Whip, although there were 3 easy dam pullovers. After the split, neither streams were passable. 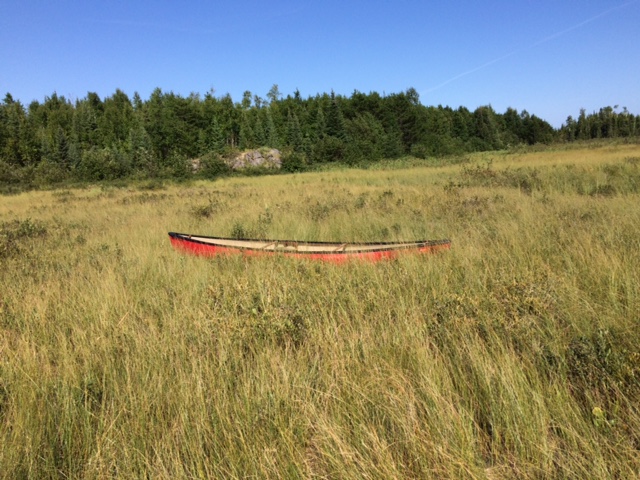 So I ditched the canoe, grabbed my rod and tiny tackle box, and started working my way to Whip. I picked my way across the muskeg, once dropping in to almost my waist. I actually wouldn't recommend walking across this stuff, but it was fairly dry. When I got to the cattails, I had to move to higher ground. I should have done this before, as there was some sort of trail along the base of the hill north of the swamp. It took about 15 minutes total bushwacking to get to Whip. It is a lovely little lake without any distinguishing features I could see from my vantage point. However, due to the challenging lakeshore, I didn't venture far from the beaver dam separating the bogland from the lake. I hadn't really researched this lake, so had little idea what, if anything it held. From my past experience bushwhacking into lakes, most likely nothing or little northerns. Just for fun, and because I could cast it the furthest, I tied on a no 5 Mepps Aglia. Hey, maybe there's a musky in there! So I slung her way out there and worked it back, reeling fast enough to hopefully keek it out of snags. Just as I was about to pull it up, the water swirled and a small northern nailed it. In one form or another, this happened every few casts until I determined the "big one" was not out there for me. However, it would be interesting in the spring when you could probably get a canoe in there to check out some more likely spots for larger northerns. One thing is almost certain--you would have a lake to yourself. What a priceless gem this area is! I took the "path" back, which led partway up the hill, and kept me out of the muskeg entirely back to the stream junction where my canoe waited. I scouted around a bit, but did not want to brave the muskeg all the way to Squire. That adventure would have to wait for a different and waterier day.

On the way back over the beaver dams I managed to partially dump the canoe and totally dump myself, answering the question I had long wondered about water depth under beaver dams. Conclusion: not over my head.

I had another swim to rinse off the beaver pond debris, conducted a tick and leech check, and promptly fell asleep in my hammock. I was hungry upon waking, so dug into the food pack. I found some strange meatloaf and potatoes concoction which I just had to heat up. It would not be suitable for more rigorous portagy trips, but for the leisure loop it was all good. Conclusion: anything is tasty outdoors with enough Tobasco.

After dinner the wind had died down, and I though I would try some fishing. As mentioned before, Juno didn't seem to have a Bass Pro reputation, but I love a challenge. I had jotted somewhere that it was supposed to contain Perch, so I checked out some downed trees across the lake from my site. Nothing do. Just for kicks, I tied on a jig with a leach and floated around. Bam, walleye. I turned around and floated past the same spot. Walleye. Well, interesting. I caught several, all about 16", and then I stopped as I had already had dinner. I was only using a 1/8 white jighead with a leach. I never got snagged so it must have been a sandy bottom. Perhaps not the best walley habitat, but it worked. Again, the hole is due south (maybe a tiny bit west ) across the lake from the most eastern site.

I got back to camp after dark and turned in.