Canoeing in a Winter Wonderland
by TreeBear 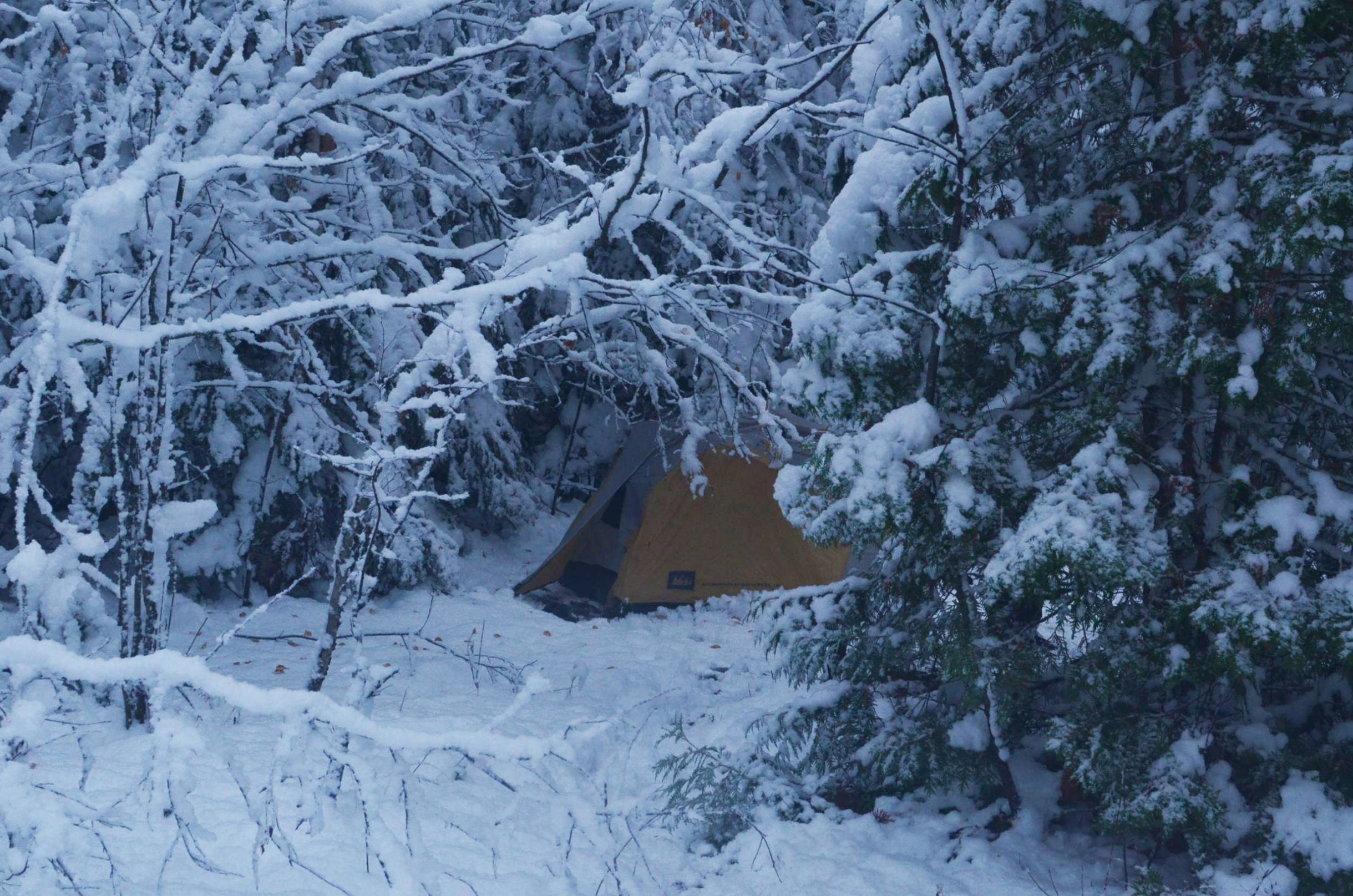 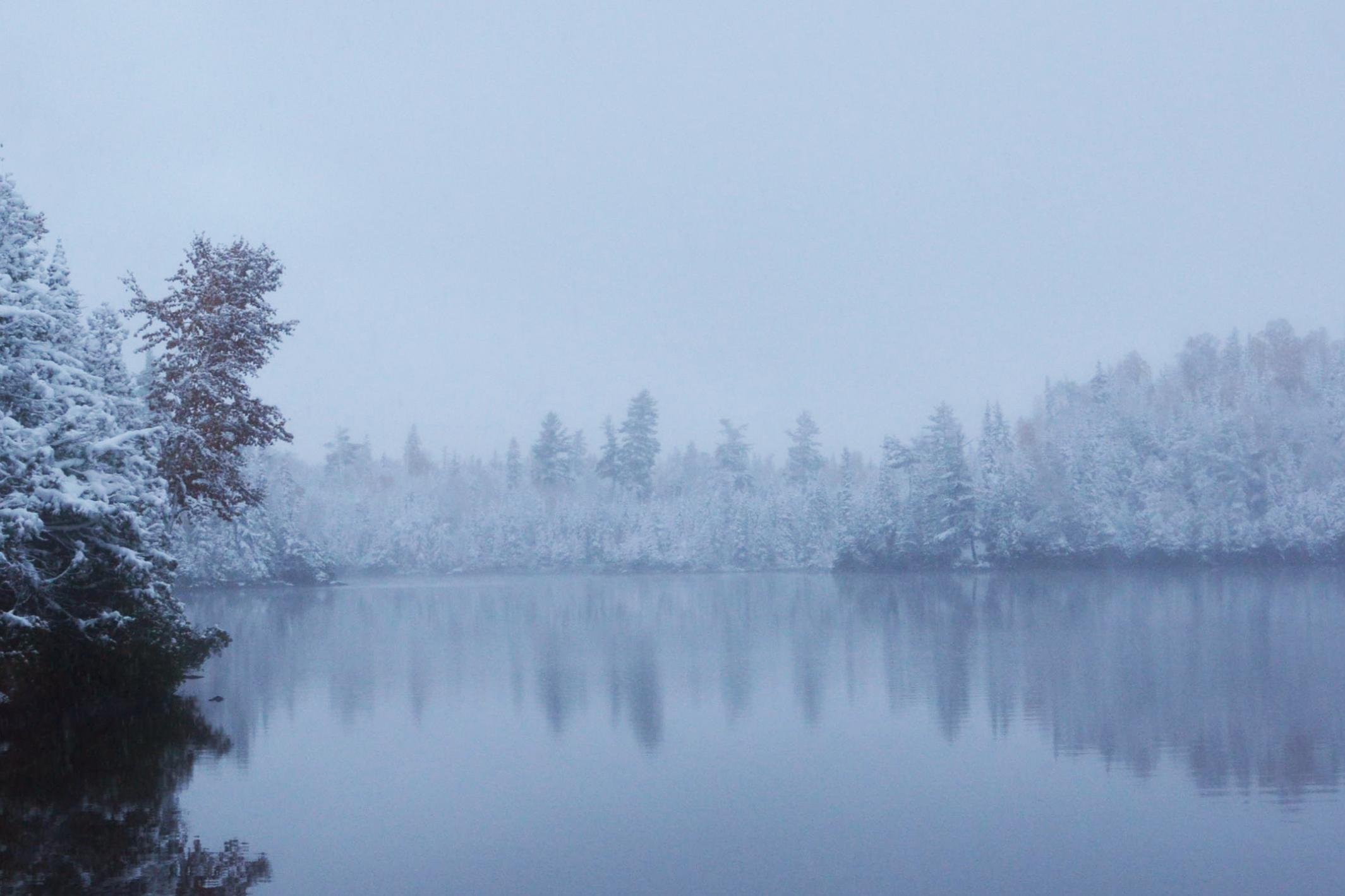 We woke up to a new layer of snow on the tent that had come in overnight. The trees were caked with the fallen snow. It took us awhile to eat breakfast and pack up all the wet gear, but we were on the water by 9:00. We made a stop at the waterfall on our way down Winchell, and then portaged into Gaskin. At a little before noon, we had an early lunch on the island site near the East end of the lake. Today's weather was much more tolerable than Saturday's, though it was still snowing off and on. Horseshoe Lake was incredibly beautiful. There were wolf tracks on the portage into Vista that were very fresh. They had to have been less than an hour old as they were very defined and hardly had any snow fallen in them (even though it had been snowing plenty today.) This made us wonder how often we get close to wolves and other wildlife during the summer that we don't even notice because the signs are just not as obvious as they are in the snow. 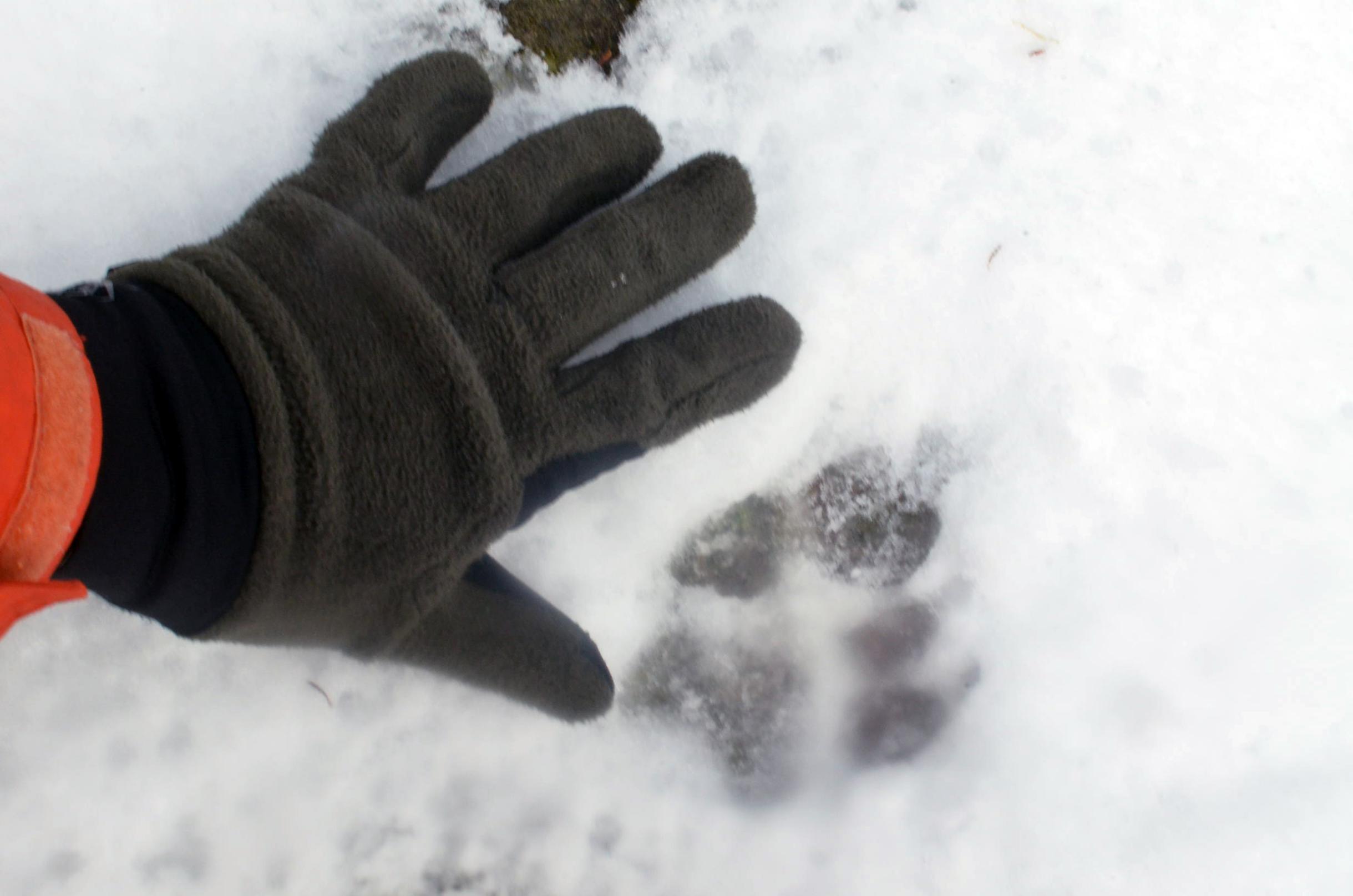 The portage into Misquah was steep and slippery as some of the snow had begun to melt off, making it quite slushy. Misquah was an incredibly beautiful lake with amazing topography on the Eastern shore. The portage out of Misquah was our most difficult of the day. It was long, steep, slippery, had a couple really slick boardwalk sections, and had uncertain footing most of the way. We both fell plenty of times on the 2/3 of a mile to Little Trout though, once again, we were rewarded by an incredible view on the far side. There were also some Moose tracks that had crossed this portage. They were larger than my outstretched hand. After the long, hard portage, it was on to Little Trout. 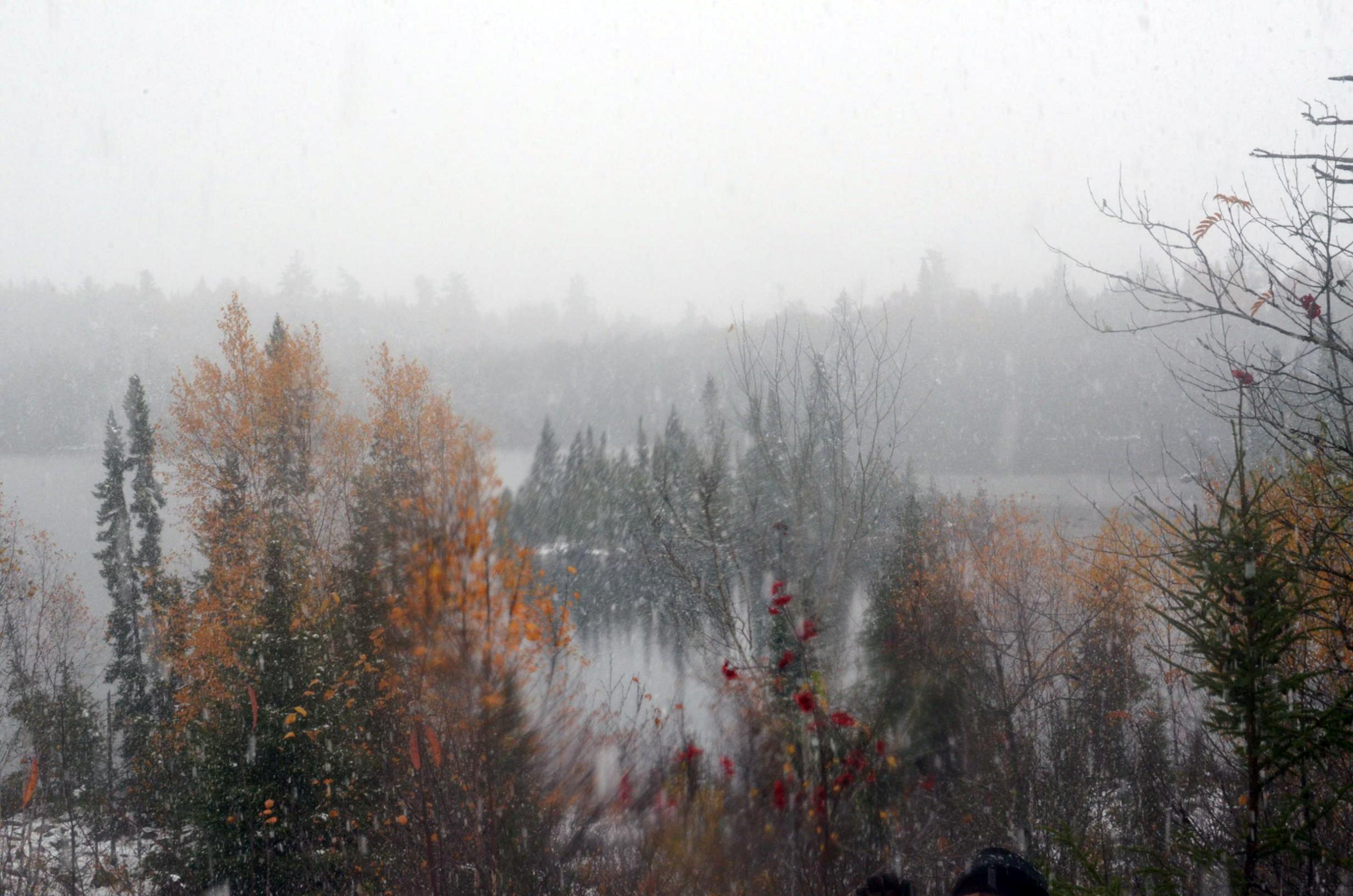 There was very dramatic sunlight on Little Trout as wave after wave of snowstorms rolled in, separated by blue sky and sunshine. All of the lakes on this chain were incredibly pretty. We portaged into Rum and paddled across. We struggled to find the Kroft portage for a little while since it was in a very different place than our map had it. From Kroft we headed on to the portage to Ram where we found another set of Wolf tracks. So much wildlife sign to see today! From Ram, it was on to our exit. The Ram portage was amazing with the intricate stone staircase and stunning views. We took the walk back to the Bower Trout landing for the car, and enjoyed seeing stream alongside the road plunge into a pretty nice waterfall along the way. We drove back to the Ram landing and loaded up the gear and the canoe. After a brief dinner and change of clothes, we were on the road by 5:00. What an incredibly unique trip! I cannot wait to be in the Boundary Waters again. 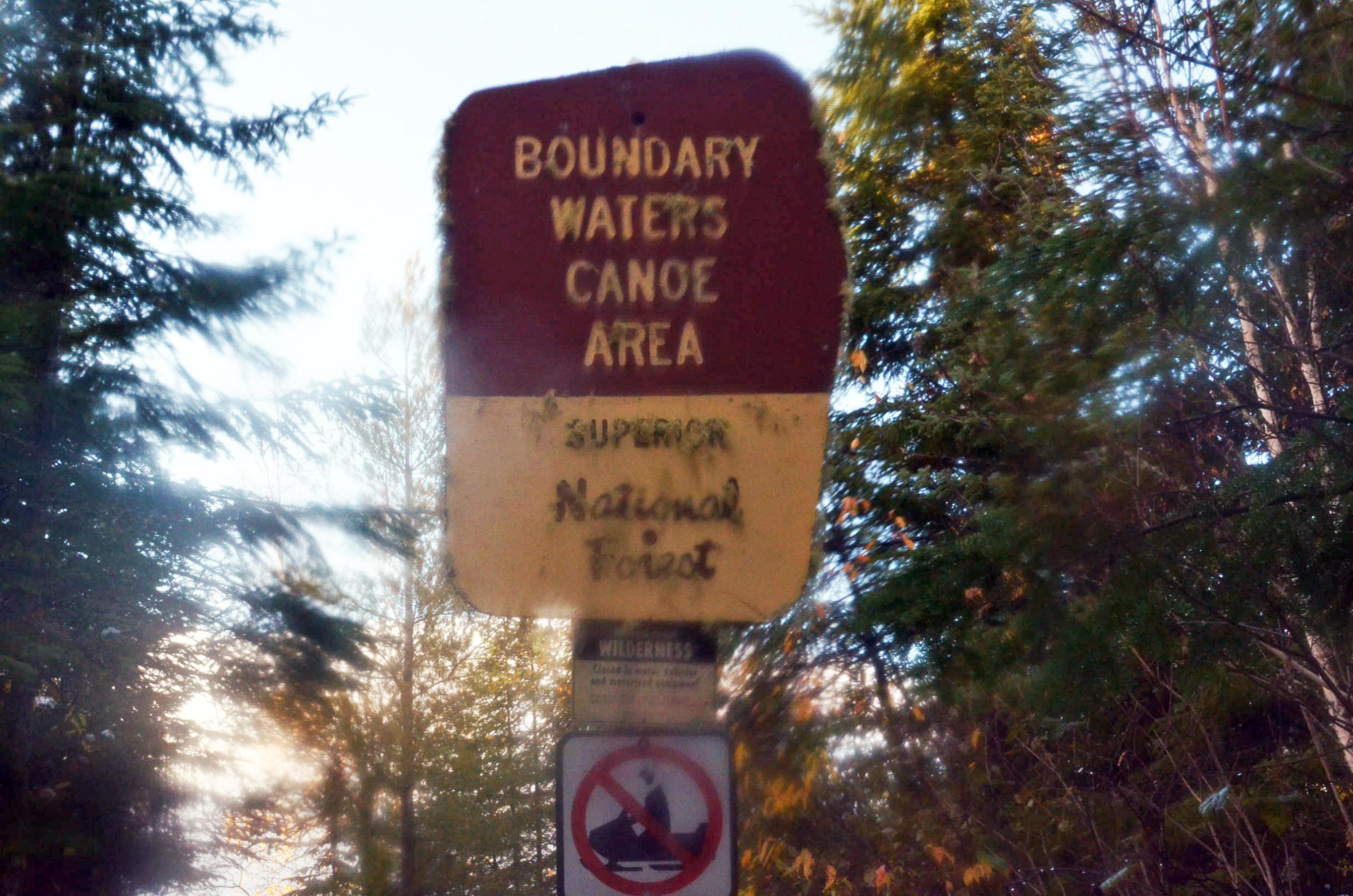