Trip Type: Paddling Canoe
Entry Date: 11/02/2019
Entry & Exit Point: Lake One (EP 30)
Number of Days: 2
Group Size: 2
Trip Introduction:
We took a trip a few weeks ago where we faced snow and harsh conditions all weekend, and have missed the boundary waters all the more since. We both found open weekends and headed up for what was more than likely the last canoe trip of the season. It was truly a one of a kind experience.
Discuss Trip: View Discussion Thread (10 messages)
Day 1 of 2
Saturday, November 02, 2019~Lake One~Lake One, Lake Two, Lake Three, Lake Four, Fire Lake, Hudson Lake

A few weeks back, we took a trip through the Brule Lake area. The snow and fall colors were so incredible and unique compared to any trip either of us had ever tried before. After a few weeks of trying to readjust back to the normal routine, we both found ourselves aching for another trip. As long as the water was open we could still canoe right? I was dealing with a hamstring injury yet, so we planned an easier route and it was off for another weekend of adventuring.

We woke up early to another light dusting of snow (why is this becoming routine on our canoe trips?) It was a good laugh in the pre-dawn darkness at how expansive the Lake One landing is compared to the Bower Trout landing we went out from a few weeks back. It was quite strange as neither of us had ever been to Lake One without a single other other person there (this place is usually quite the traffic jam.) We brought our gear down to the water only to realize that the first 30 ft or so were locked up in a thin glaze of ice. Not ones to be deterred, we broke our way through with the back up paddle, and we were on our way. It was good to be back on the water again.

We paddled south across Lake One with a decent wind already starting from the West. It was a pleasant thought that we may get a tailwind through the numbers chain. There was not a single other group out, and we reveled in the quiet. The portages went quickly, despite more ice blocking the entrances and exits, and the fresh snow that blanketed the trail. 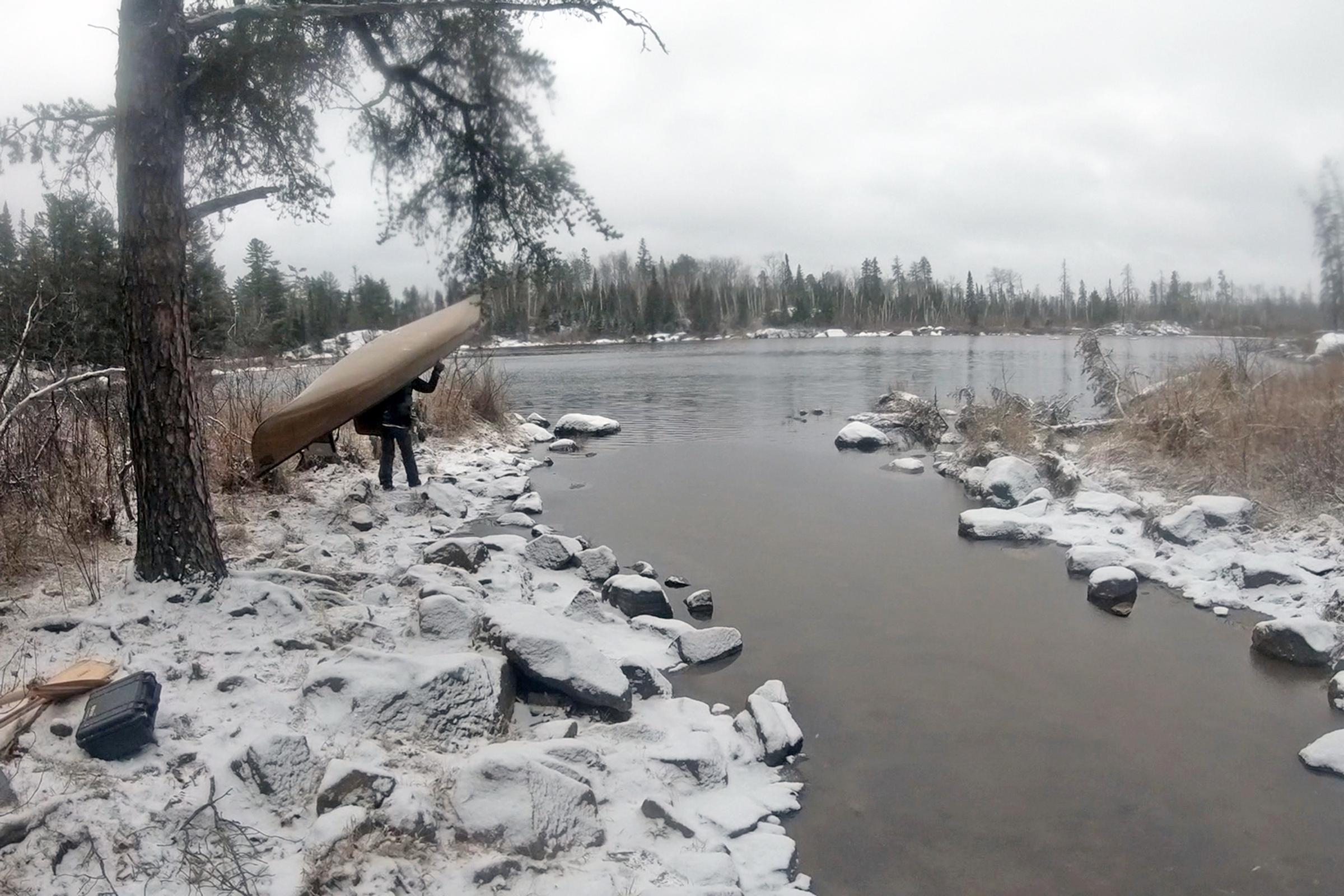 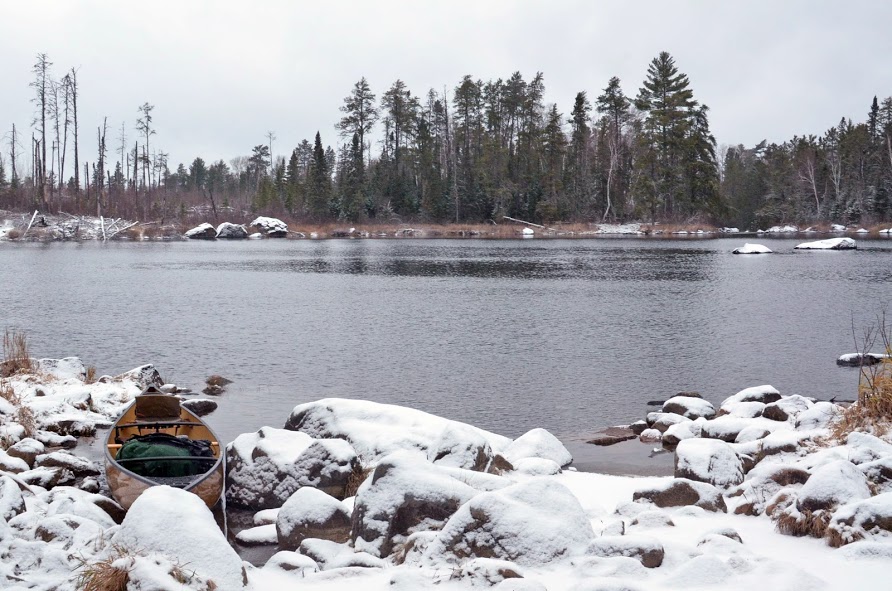 It was a quick paddle through Lake Two as we reminisced on memories from our guiding seasons, and the nights spent on this lake. We made the corner into Lake Three as the snow started up again. The wind was really starting to blow, but thankfully we had a tailwind. There was a pretty good chop starting on the lake, and snow blowing into our backs, but it was so good to be out again. We stopped in at the northern island site on Three for a snack break, and then headed on to Four. We waved at one of our sentimental campsites on Four that we had both stayed at while guiding, as an Eagle passed low overhead. He was probably wondering why people were out canoeing this time of year. We headed up into the more remote Northern bay of Four which neither of us had visited in the past. It is really pretty up in that part of the lake, especially with the fresh blanket of snow. We had to break through a good 100 ft of slushy ice at the landing, but no bother. Glad we got here while we did. Another week or so and none of these lakes would be available to us. It was amazingly pretty on the portages through to Fire, and we stopped for a little bit to enjoy the serenity of it all. 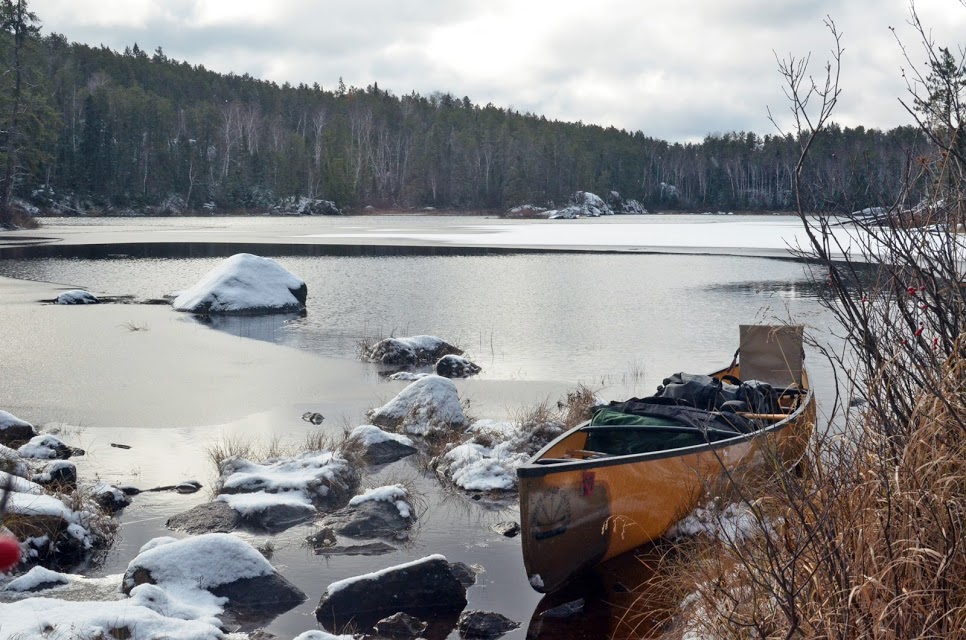 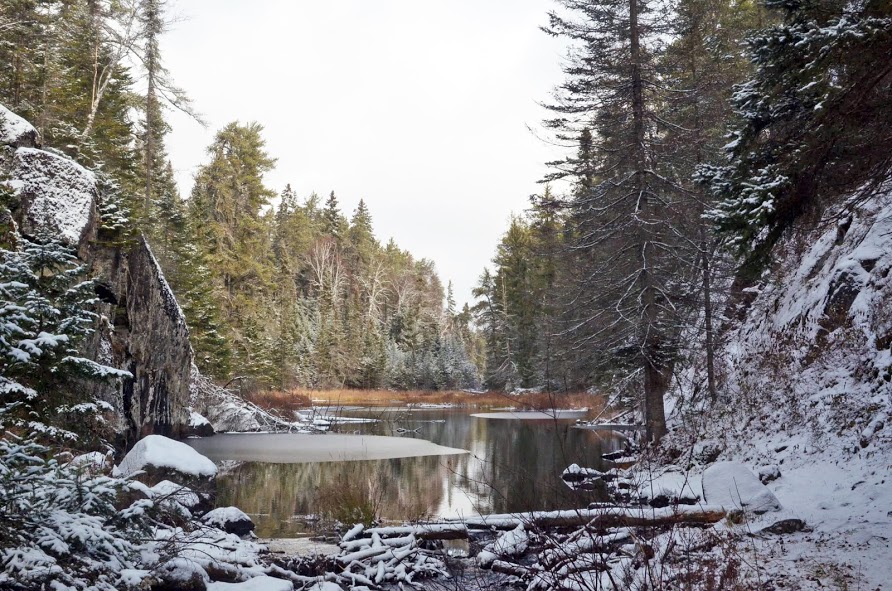 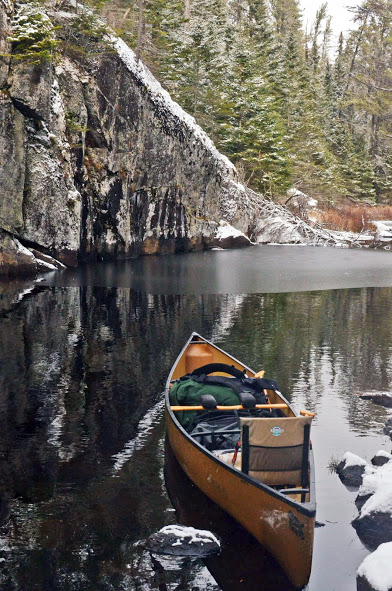 Once reaching fire, we surveyed the challenge ahead: ice as far as the eye could see. We decided to try our luck and, if the ice proved too much, we'd turn around. This was something neither of us had dealt with before, at least at this extreme. I guess, 'tis the season! Each canoeing season has a price. Instead of mosquitos, there's ice for the November canoeist! We used the handle of the plastic, back-up paddle as an ice ax to pull ourselves through the half inch thick ice; sometimes breaking through, other times we found ourselves gliding on top of the ice sheet. The ice continued until about the first campsite when the lake opened up again. We didn't find the first site, but stopped at the second site for lunch. Pretty area. We both agreed, we would gladly come up here instead of the normal traffic jam on the numbers. 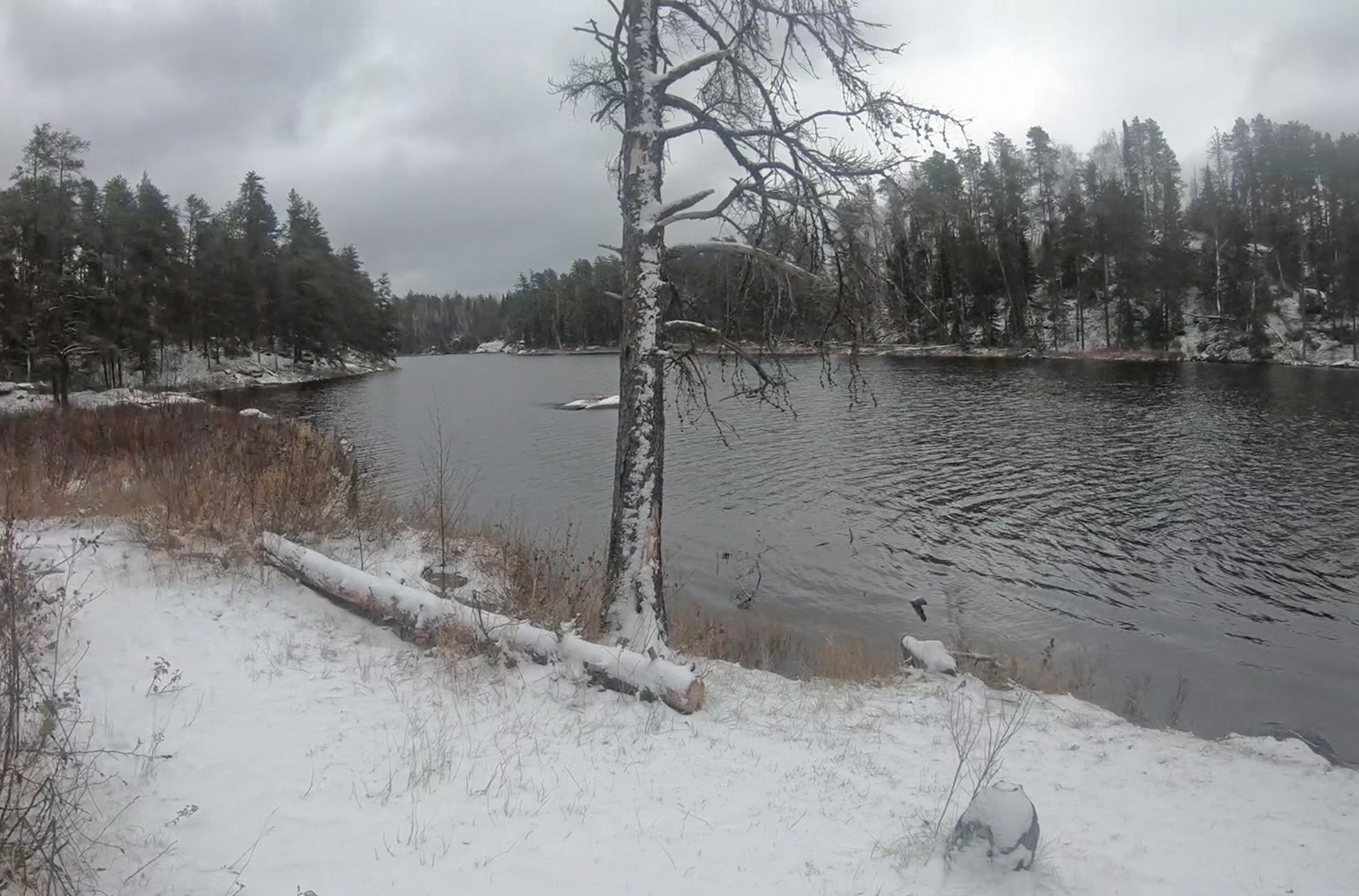 We took the short portage into Hudson, and straight into our biggest challenge yet. The northernmost part of Hudson was locked up tight with snow frosting the top. We had a tough choice to make, neither one would be easy. We could turn around and fight our way back where we came, or break through an unknown amount of ice to get to open water. We decided to start working our way through, and see if we could make progress. Some of the ice in this section was nearly an inch thick, and it was very slow progress. The lake was frozen past the second campsite until, finally, we hit open water. There were sporadic sections of ice in the narrowest sections as we headed South towards the main body of the lake. Thankfully the sun was starting to peak out from behind the clouds. 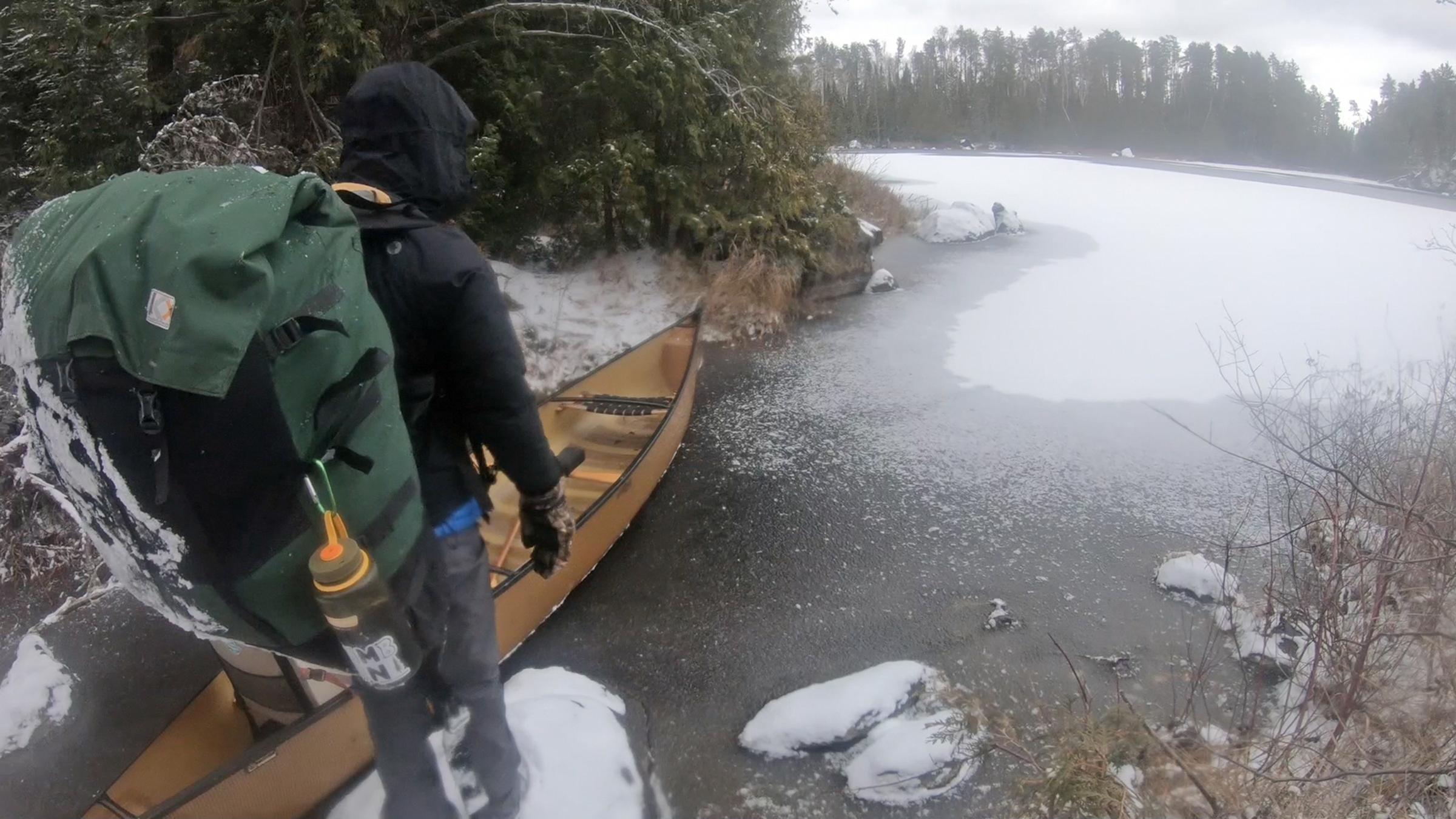 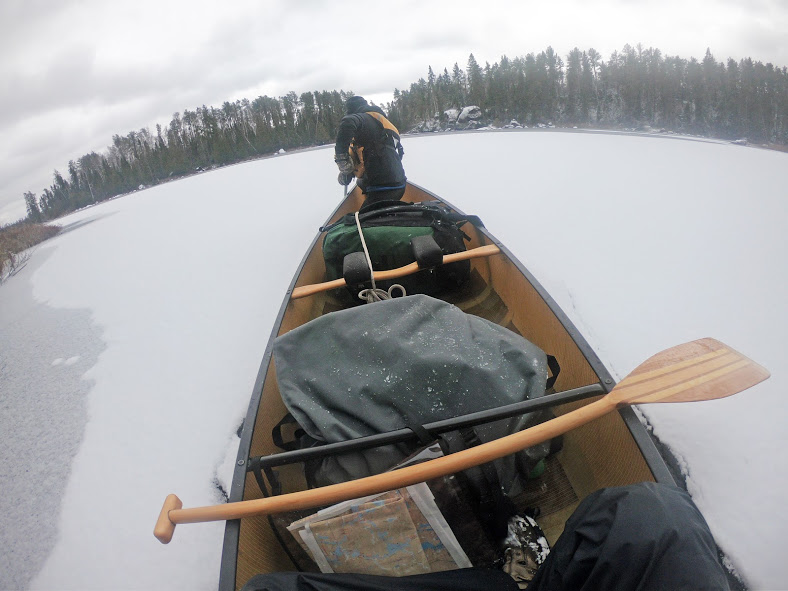 Our original plan, once we got to Hudson, was to head down the creek towards the not-often-visited North Wilder. We knew this section would be rough, but we both had long wondered what it looked like. The wind was really rough on Hudson as we pulled into the mouth of the creek. The whole pond at the start of the creek was iced up as far as the eye could see. We tried breaking through as we had before, but there was no progress to be had. The ice was over an inch and a half thick, and the bog alongside wasn't solid enough yet to walk on. Thus, discouraged, we turned around. We had our choice of sites on Hudson, and ended up picking the second one East. As far as burn-zone sites go, it really wasn't a bad place. The rock outcropping helped shield our tent from the stiff West wind, and I got a fire going with one match. A nice, warm dinner and an early bed time were in order. Another fun day lay ahead. 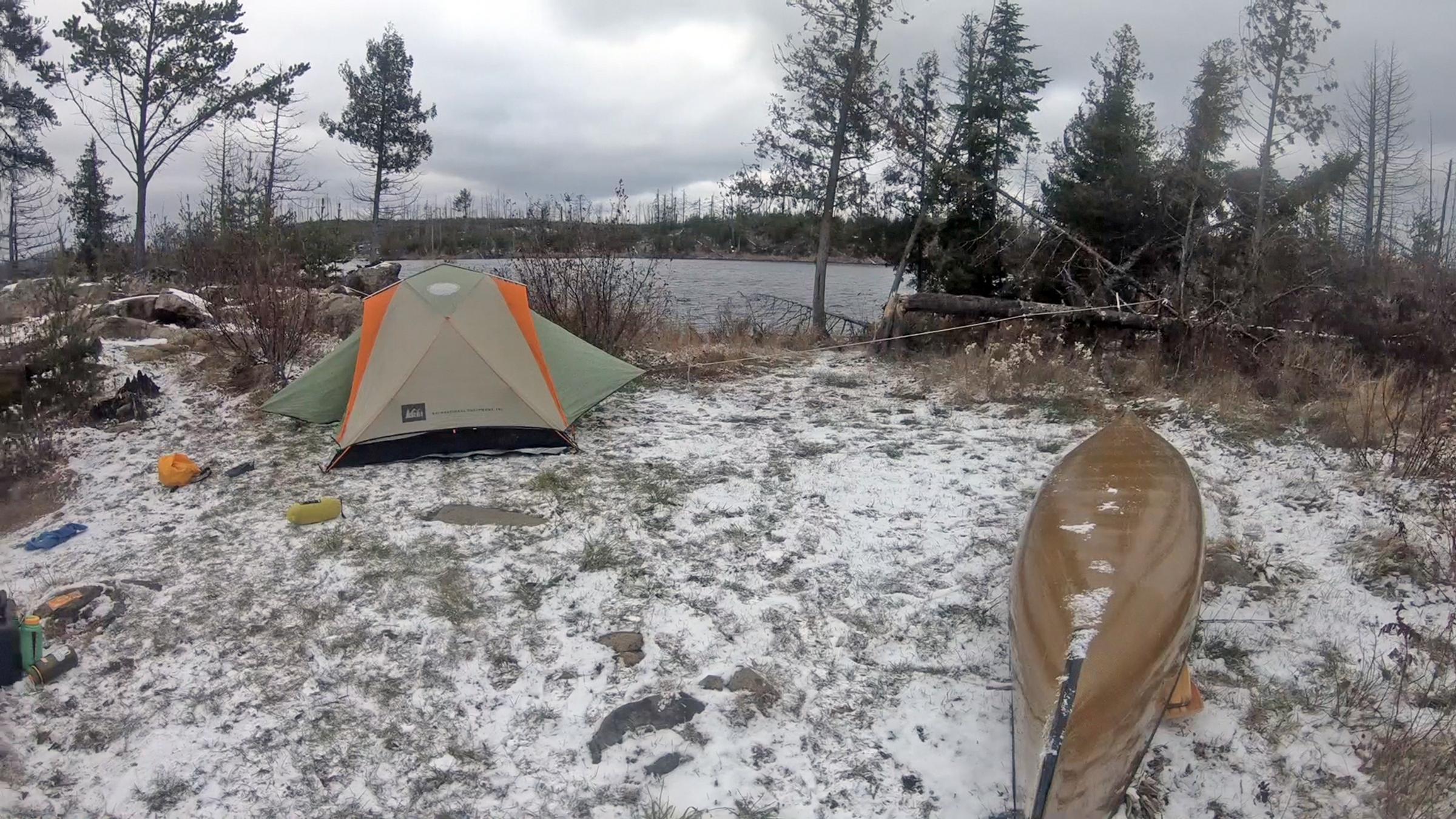