Trip Type: Snowshoeing
Entry Date: 12/30/2019
Entry & Exit Point: Snowbank Lake (EP H)
Number of Days: 3
Group Size: 2
Trip Introduction:
My wife Rachel and I decided to spend New Years in our favorite place - that's right, the BWCA! Only this time we armed ourselves with pulk sleds instead of canoes. We like to go to new spots when we go the BWCA, so we opted to hike across Snowbank and to Parent Lake. We camped for two nights on Parent Lake and experienced the cold, quiet serenity that can only be found when camping in Winter!
Discuss Trip: View Discussion Thread (6 messages)
Day 1 of 3
Monday, December 30, 2019

As Rachel will often say, " Winter is meant to be embraced, not endured". Well, we live in Western Wisconsin, so we might as well try to enjoy the 7 months of it! We have winter camped both of the last two winters, so we have most of the equipment that we need. Nevertheless, we stopped at our favorite store (perhaps on Planet Earth), Piragis, and rented our Snowtrekker shortwall tent and wood stove. Tim, the outfitting expert there, suggested we try hiking out of Snowbank Lake on the Thomas Lake Winter Trail to avoid the heavy slush that was covering most of the lakes. This proved to be sage advice. Spoiler: the slush was terrible (everywhere except the trail). So after packing up, we headed to Snowbank and started our hike out.

The hike across Snowbank was fun and more or less uneventful. One thing my wife and I didn't realize was that there were many cabins in the Wilderness Bay area of Snowbank. Those looked fun, and there was a giant snowman built on the shore that brought a smile to our face. We hit the portage.

The portage was a doozie with the pulk sleds. Rachel is 4 months pregnant (yay!), so she was a little limited on super physical exertion. This portage required it with a couple steep climbs. In the summer, they'd be a breeze, but they required us to take the sleds up the hills one at a time. The portage into Parent was beautiful though. Most of the snow had not fallen off the trees, so it was a winter wonderland of sorts.

Unfortunately, once we got to Parent, the campsite that I wanted to take was already occupied by someone else! (Who else is crazy enough to be out there!?!!) We then decided to hike to the opposite side of the lake and tuck in by some islands. About 1/3 of the way across the lake we hit the massive slush. It stuck to the bottom of the sleds and made them terrible to drag. So, we turned back and found an incredible site next to the portage! We decided not to camp on the ice due to the slush, but we found a beautiful red pine grove right off the lake to make camp. It took us a couple of hours to get camp the way we wanted. Once we were all set up, I put out tip ups and tried to catch a walleye or two. No bites! I chopped firewood until dark and Rachel got the inside of the tent set up and tended the fire. We had hobo dinners with Kielbasa and decided to read our books after dinner to relax after a fairly taxing day. A couple lessons:

- Avoiding the slush by taking the winter trail was a really good idea. - My military issue "bunny boots" are the greatest winter boot ever made. No kidding. - It would pay to get to camp earlier than we did. I don't think we got our tent set up until about 3pm. That was later than I would have liked. - Bringing a full sized axe is heavy, but worth it. It makes firewood collection so much easier and quick. - Splitting up the camp chores really made us efficient. 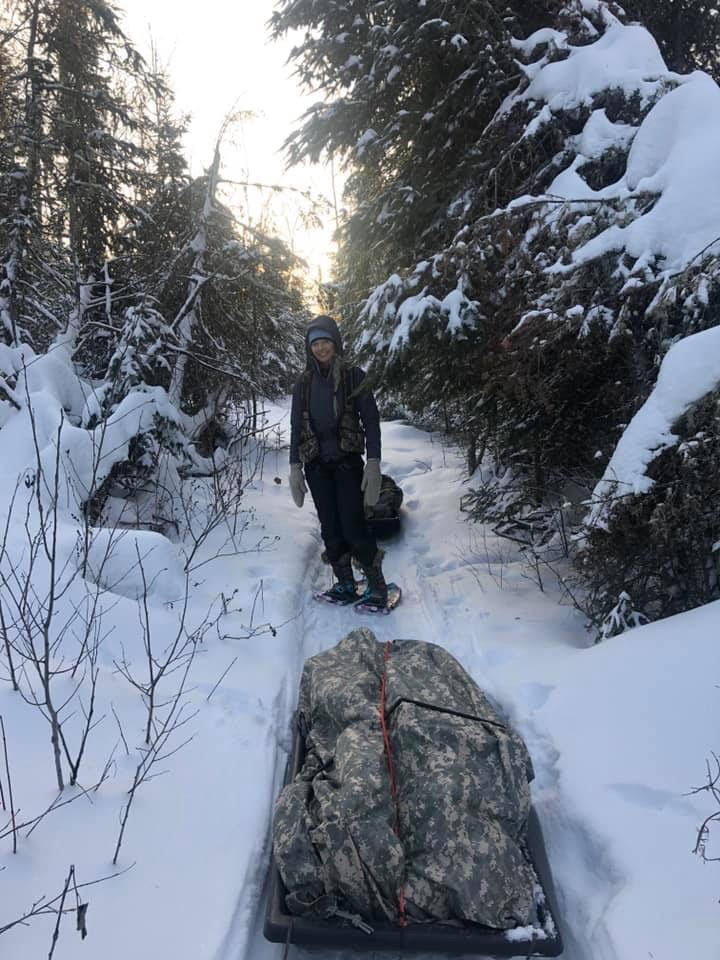 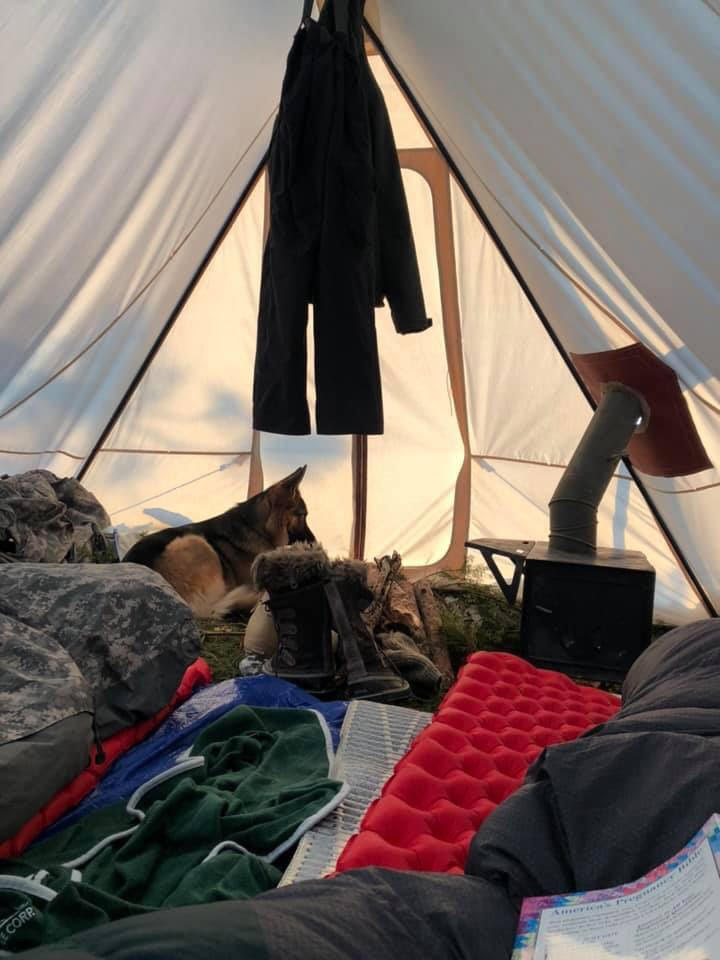