WCPP: The Wind Rules the Day, But the Bears Rule the Night
by wyopaddler

Trip Type: Paddling Canoe
Entry Date: 08/11/2019
Entry & Exit Point: Woodland Caribou
Number of Days: 20
Group Size: 2
Trip Introduction:
After several years of trips to the Quetico, my husband and I decided to live on the adventurous side this year and undertake a three week explore of the Woodland Caribou Provincial Park(WCPP). On August 9th we traveled from Lander, WY to Williston, ND where we camped at the Days Inn. We left early the next morning and crossed the border into Canada at Cartwright. The border agent didn’t know the WCPP and questioned us thoroughly, mostly about the fishing opportunities. We stopped on the outskirts of Winnipeg for gas and water and then drove on to Lac du Bonnet where we had a tasty BBQ plate at the Lakeview Inn watching it pour down rain outside. After dinner we took the LONG dirt road to the Beresford Campground. The road was a dusty, washboard but otherwise fine and we arrived at our campsite just at dark, threw up the Megamid while drinking a Dale’s Pale Ale and swatting mosquitoes. It was very damp but not raining and we feel asleep to the sound of the whippoorwills calling and the neighbors partying well into the night. Hope you enjoy the report. As a warning, it's kinda long and some of the details are suspect :) Also, there is a short summary at the end comparing our limited experience in the WCPP with our broader experience in the Quetico.
Discuss Trip: View Discussion Thread (18 messages)
Part 1 of 7
Day 1: August 11-Beresford Lake to Garner Lake-

We slept poorly and got up around 730am in the damp, dewy wetness. We whipped up some hotdrinks to go with our oatmeal, yogurt, and bananas and went for a walk to the nearby boat launch while the tent dried, then packed and sorted gear in the morning sunshine. We drove to the put-in around 1000am and loaded out the drybags, rods and paddles. A curious couple was returning from their cabin on Garner Lake and offered us the use of their bathroom at the far end of the lake? They also warned us of the motorboats on the narrow access creek. 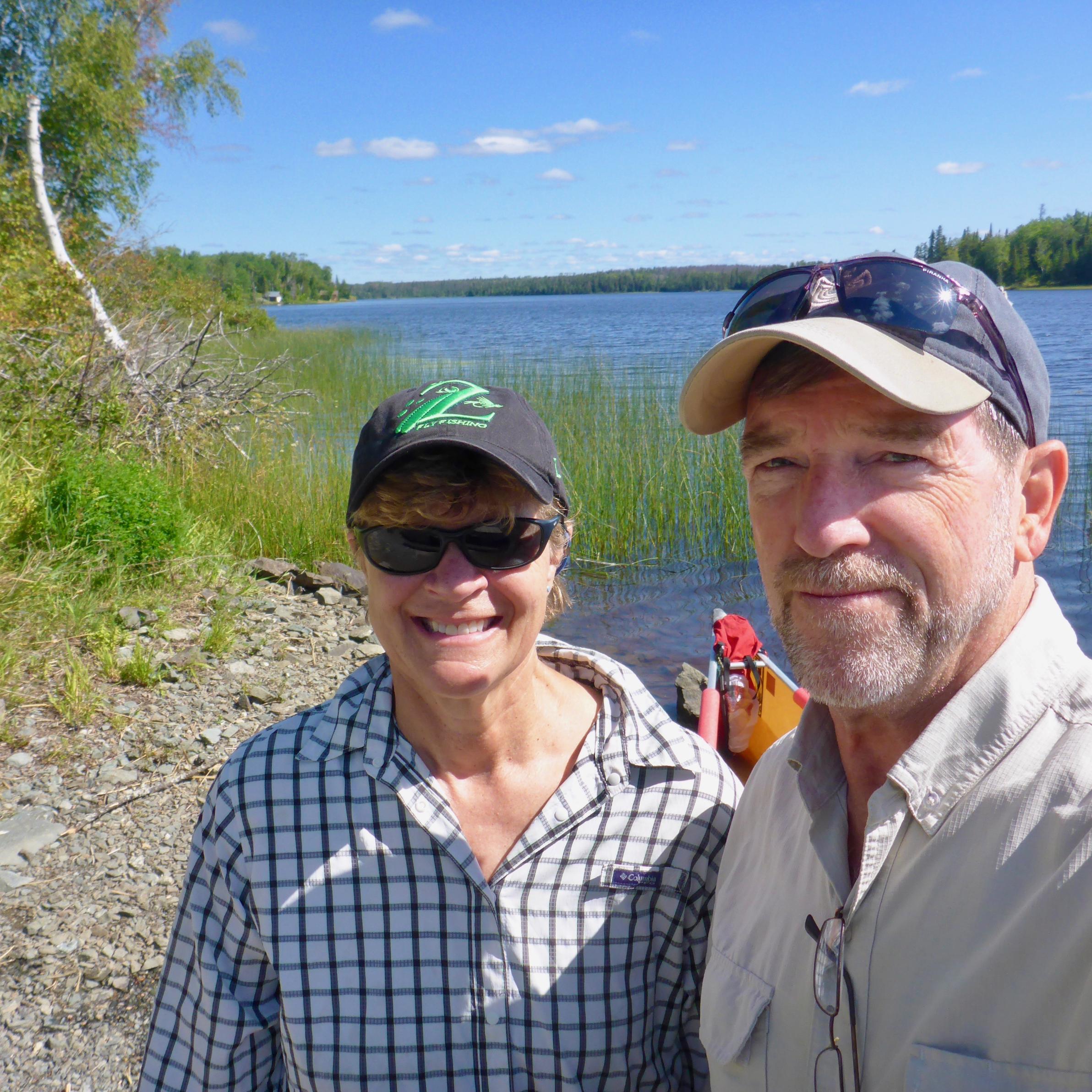 We had just loaded up the canoe when another motor craft pulled up to the dock asking, “Where ya headed?” “Woodland Caribou Park.” “For how long?” “Three Weeks.” “ Three Weeks! And that’s all the gear you have? I have more than that for three days! Of course, we had 350 beers! Oh, and two more boats are coming behind me.” So, there you have it ? 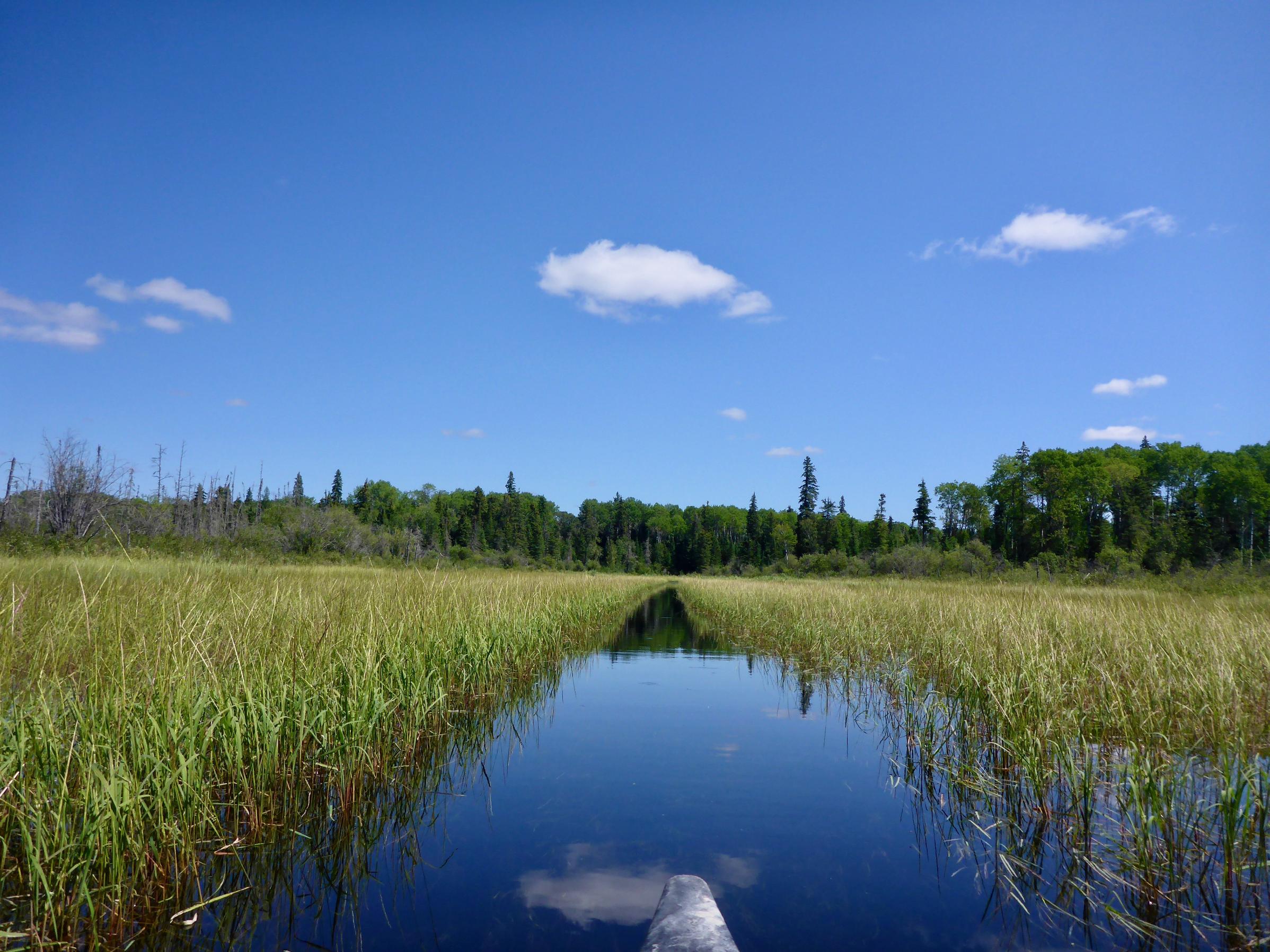 We launched at a late 1130am with two loons looking at us curiously and paddled down the lake to Beresford Creek and had a windy (6.5 mile) paddle through the narrow, grasses though the water was plenty deep. We stopped at Garner Lake campsite #1 for a stretch and a snack among our first blueberries. This site had an appalling amount of trash on it. “Looks like the Lander landfill.” Seriously, old camp chairs, tarps, propane and glass bottles, Pringles cans, etc. One of the motorboat parties should clean it up. Just sayin’. 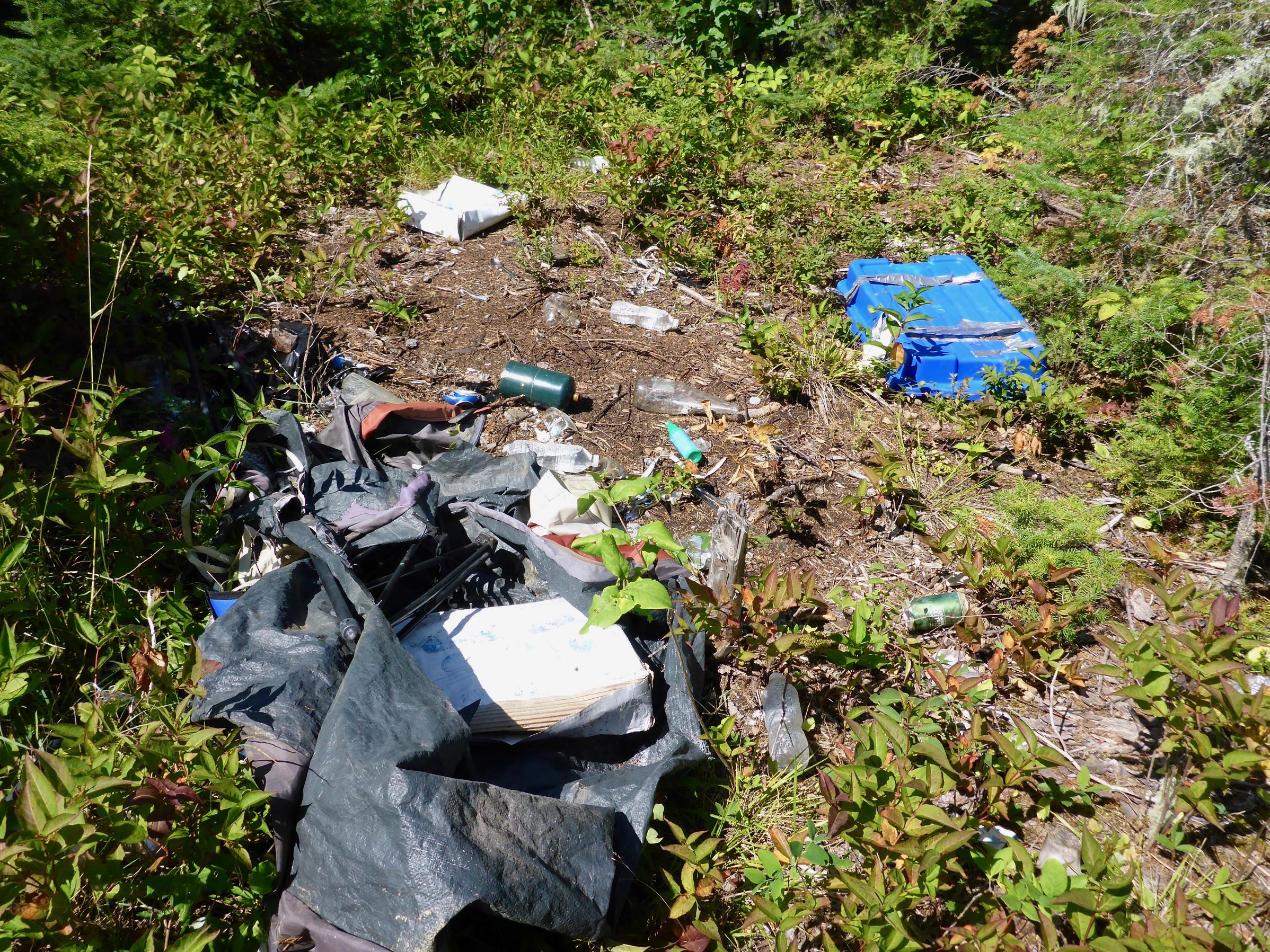 After berating litterbugs, we paddled down the lake on a nearly still afternoon (slight tailwind) to campsite #6 which was not quite as trashed as the first site but there were mounds of toilet paper EVERYWHERE and a couple of old toilet seats propped against trees. Disgusting, I’m not thinking too highly of the campers around here. Anyway, we paddled on to the WCPP boundary and checked out the first portage (330pm) and decided we wanted to camp on the big sandy beach nearby but there was a couple of sunbathing motor boaters beached there so we tossed our lines in for an hour or so until they left and then paddled over to check it out. By now there was a strong west wind heading down the lake. The site proved to be quite nice and mostly clean, had lots of flat spots for tents, a picnic table, a fire ring or two, and the requisite nails in trees. We set up the tent, went for quick swim, and made dinner in the stiff breeze sans mosquitoes (smoked salmon pasta with sun-dried tomatoes, garlic, and shallots). 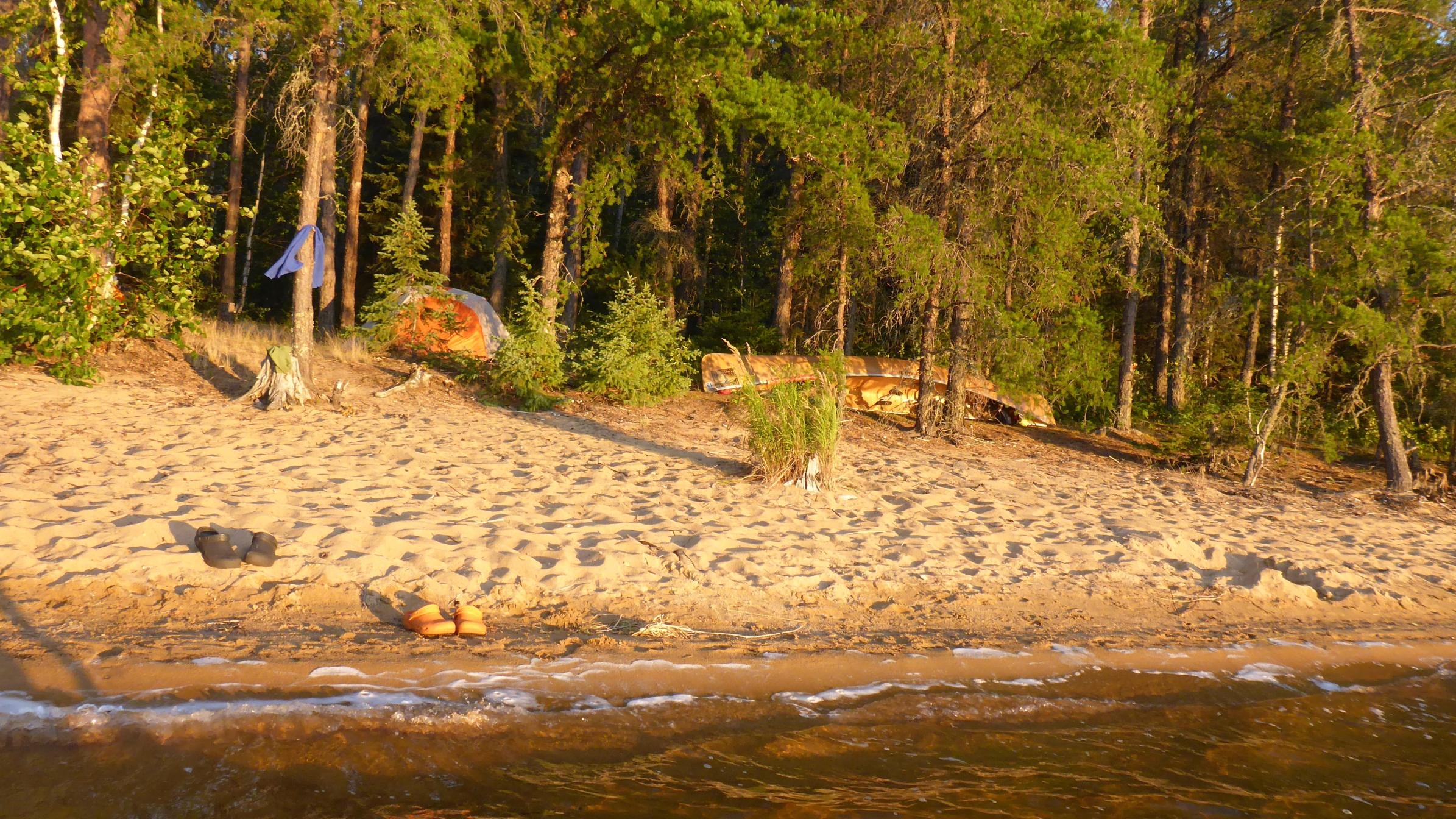 It was still early so we walked the beach, looking at bear and bird tracks, picked a few blueberries for dessert and watched the sunset just before 900pm. We fell asleep to the loons calling and the waves lapping. Tomorrow it’s into the WCPP. 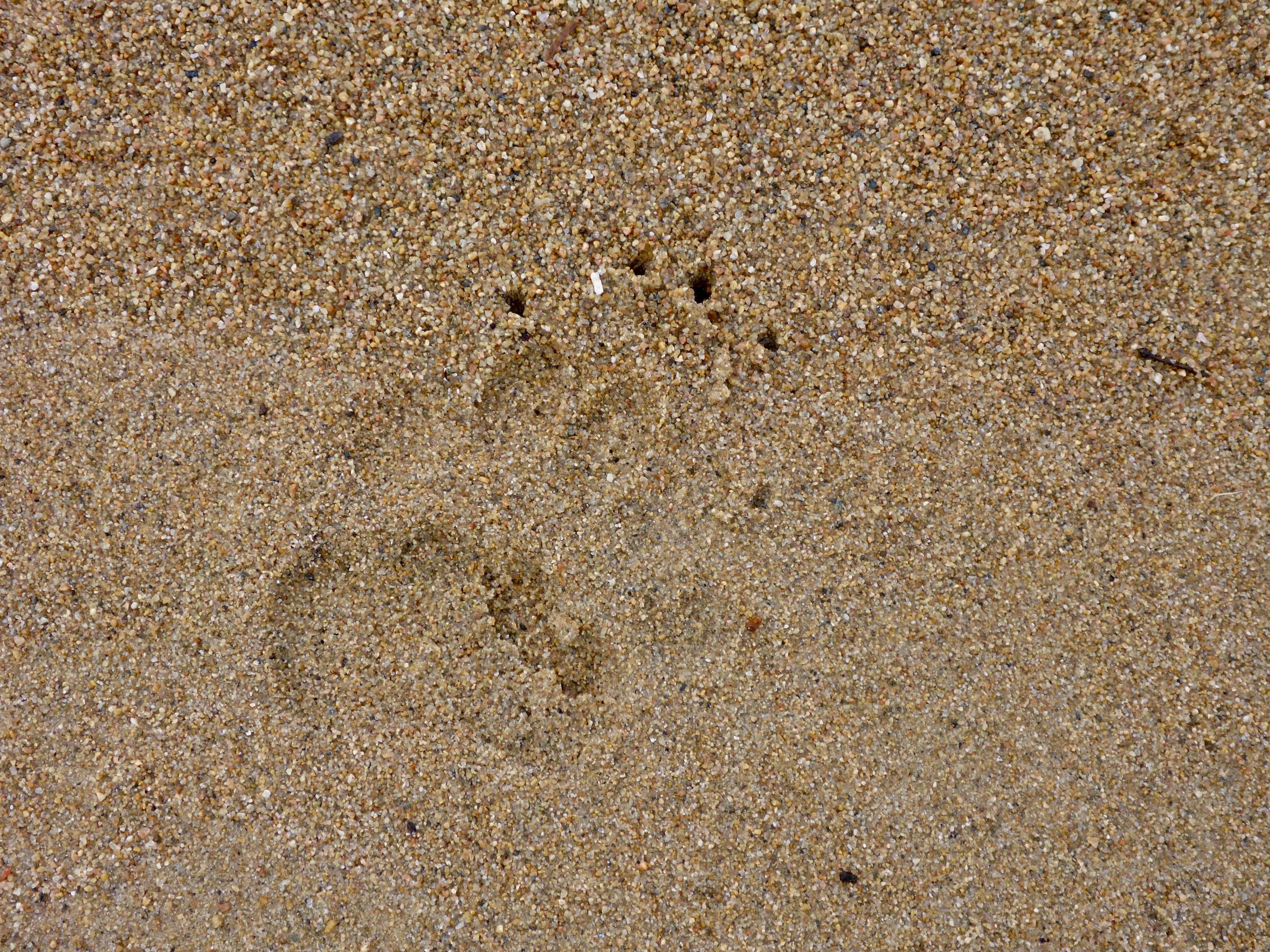 “The Most Amazing Day” 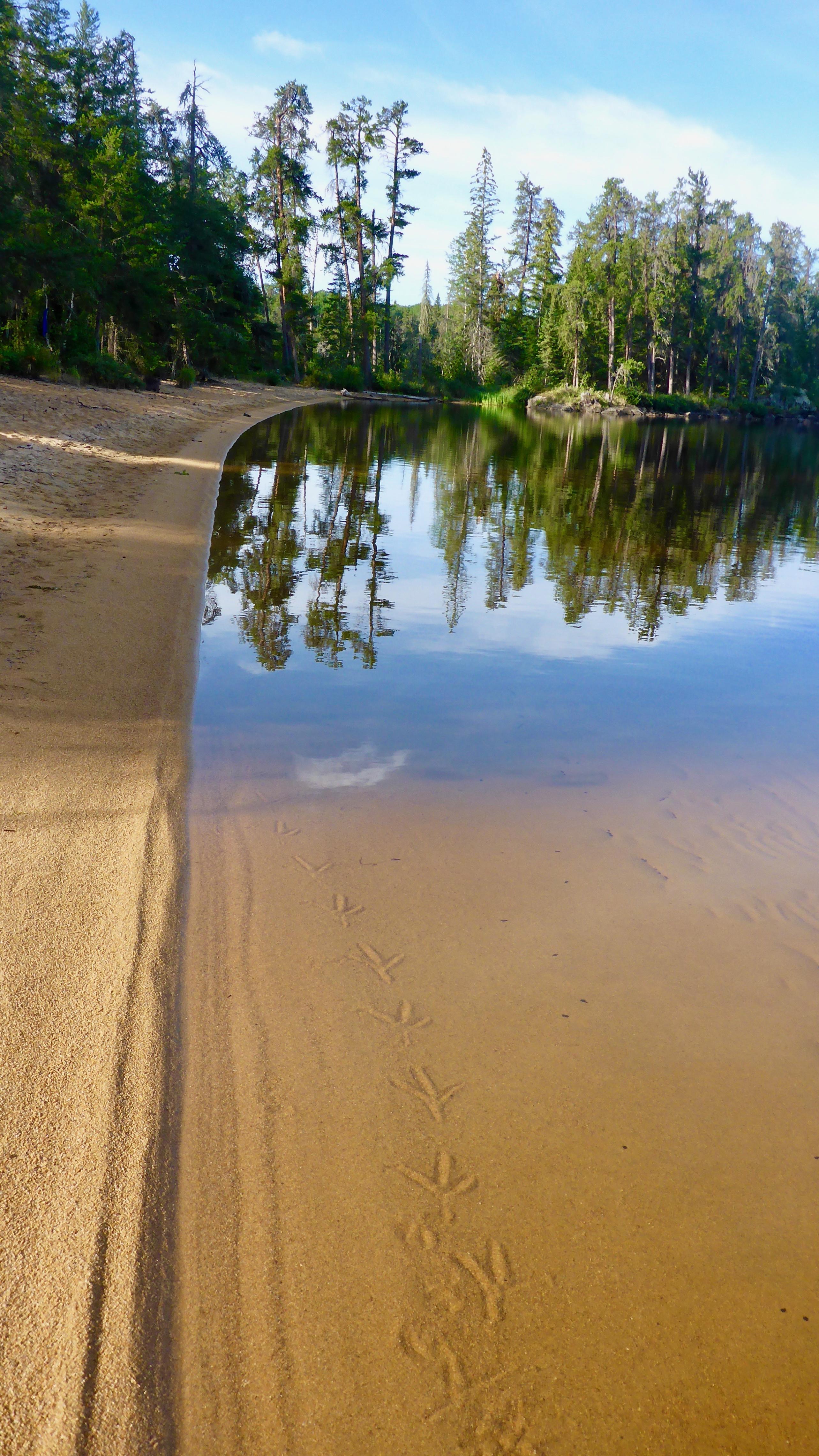 We got up to a cool 49 degrees and packed up camp over pan-fried bagels and hotdrinks. Just after launching from our beach camp (930am) Tony spied an animal entering the water near the WCPP sign and swimming across the lake. On closer inspection via binoculars we identified it as the wily woodland caribou, no joke. We paused and watched as it swam about ¾ mile across to a nearby point and slipped into the forest. Amazing! And we weren’t even in the WCPP yet. 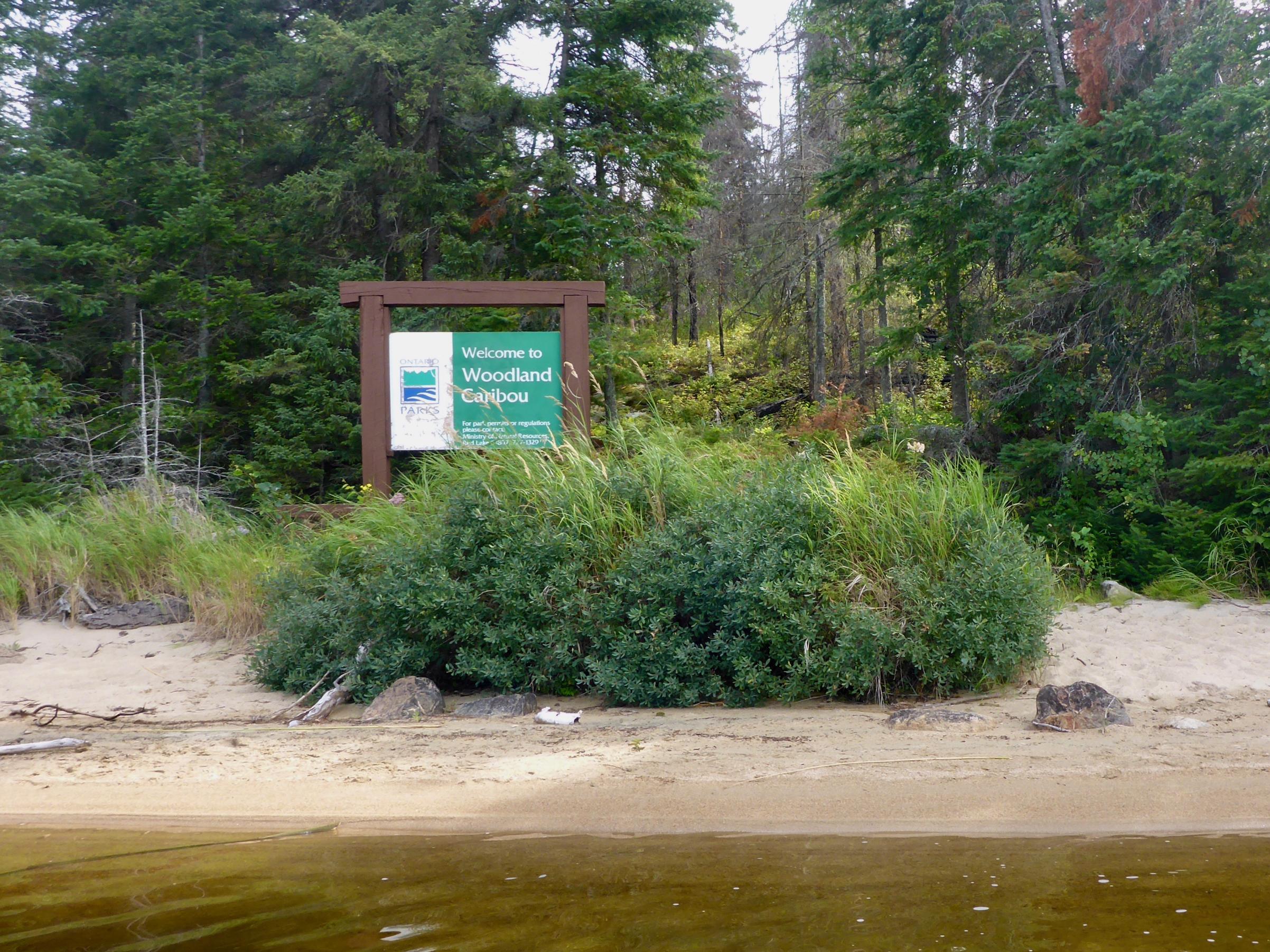 After that memorable interlude we headed into “The Burn” and made short work of the first two portages (300m and 225m), pulling over a beaver dam between the two, then across the long, hot, but well-marked 825m portage into Jester Lake. 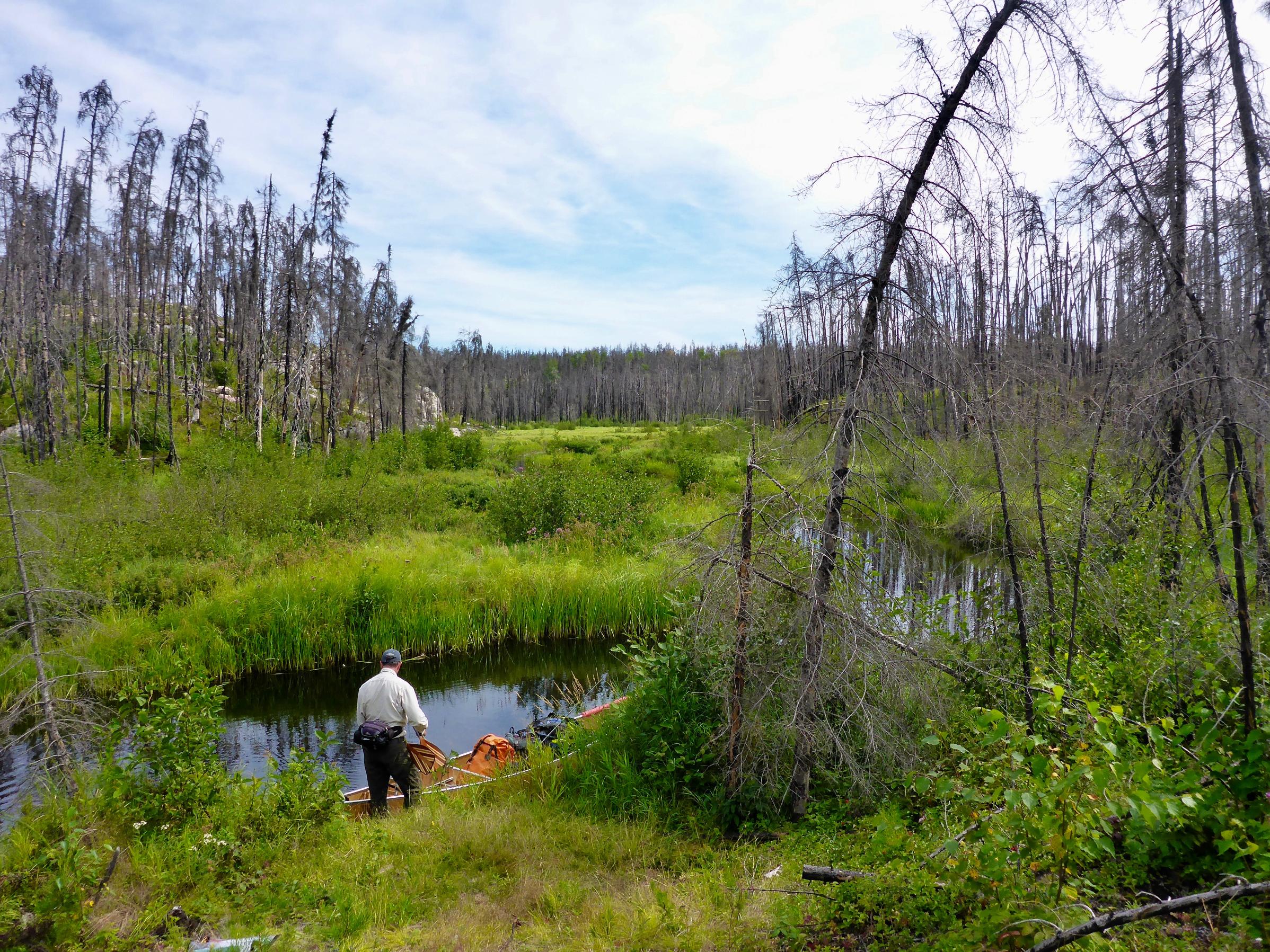 We were amazed at the bounty of blueberries available to us and the bears, at the shake of a bush. I haven’t seen this many berries since my youth on the blueberries plains of Maine. Well, we had lunch on Jester, checked out a possible campsite for the return journey and just as we headed off were amazed to see a black bear foraging for blueberries on the left hillside. Tony caught a couple of pike and I was stung by a bee but didn’t die of anaphylaxis, though I was swollen and itchy for days. 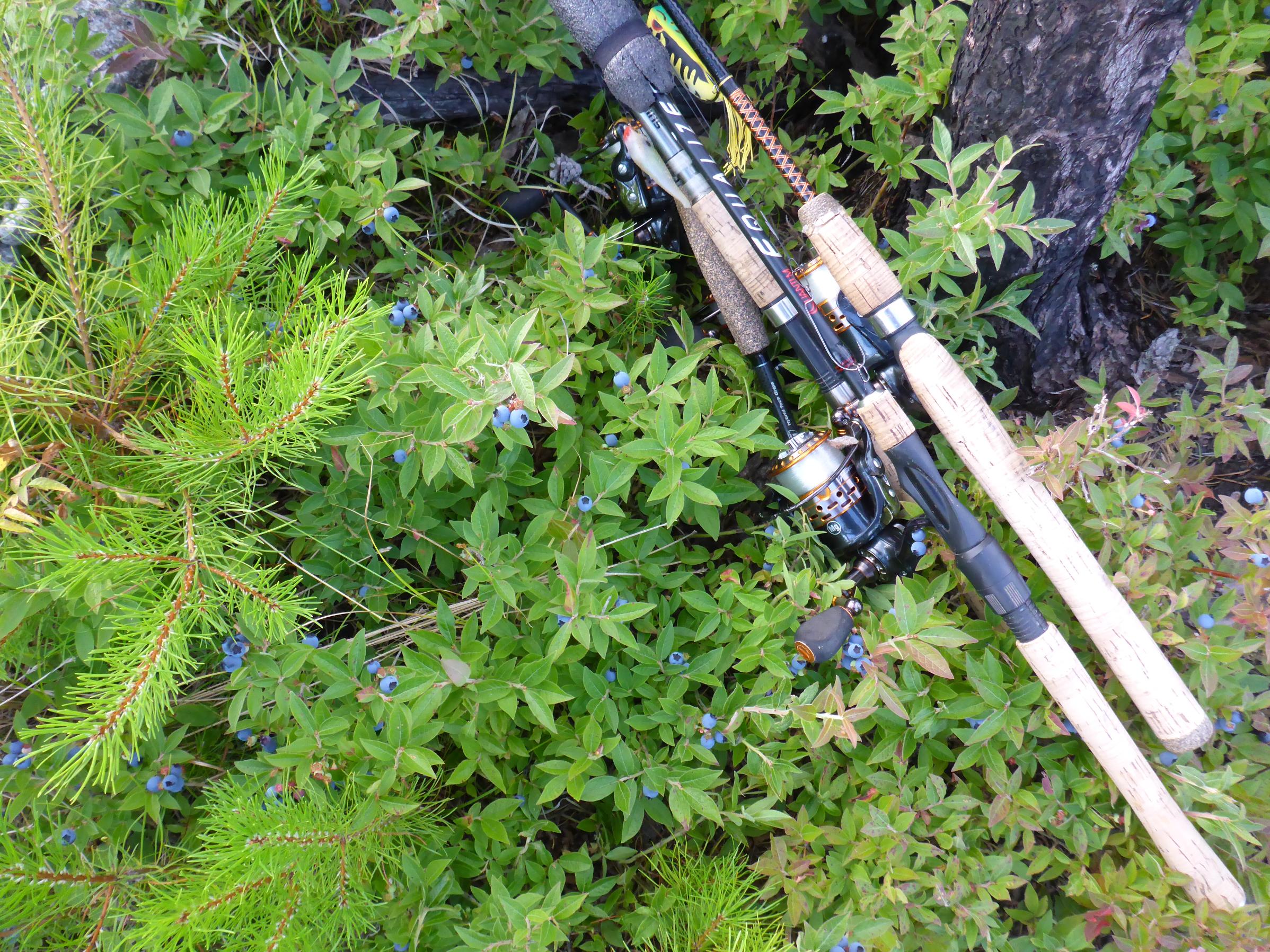 After Jester we crossed the next 50m portage and then made a little jump around some rocks, and on to the next 30m portage. We were amazed at how little water was in the Garner River, especially since I checked with the park a few days before we left and was told water levels were above normal and the portage crew had been through in July. Hmmm. . .We walked more than we paddled to the next 100m and 40m portages and by the time we got to the boulder obstacle at the end of the next pond we were amazingly tired and the bags were feeling amazingly heavy. 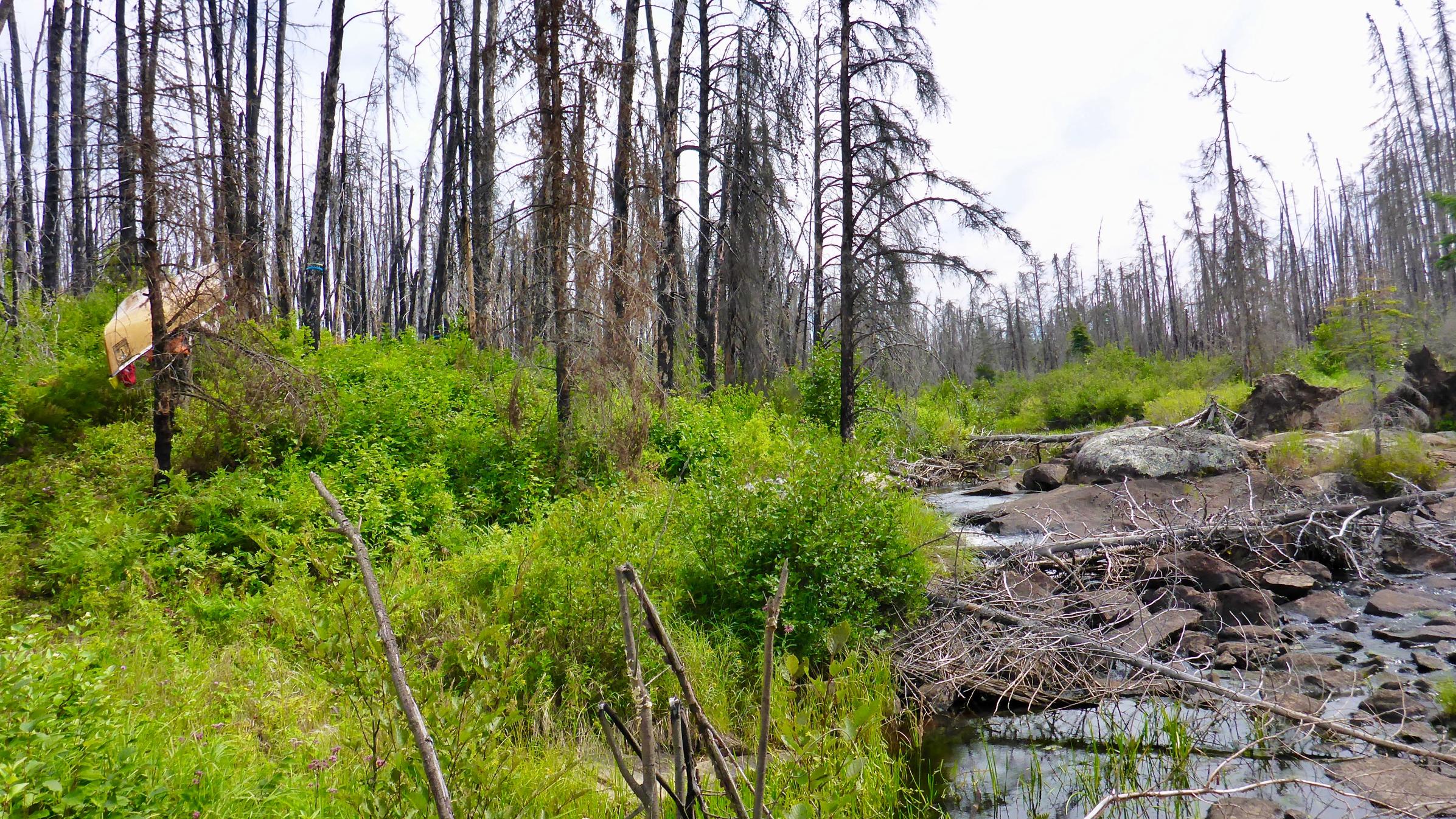 As we paddled on we saw our second bear of the day swimming from one shore to the other, making a short hop across a naked, rocky island. We paddled onward across the pond to the “river” mouth but there was no paddling to be had so we walked again lifting the bags and boat around rocks to the next 100m portage along the narrow, shallow, weedy Garner waterway. We were forced to wade in the river in order to get into the next pond, amazingly tired and ready to camp on any rock we could find. An eagle flew over as we found a convenient little rocky point not far from the next portage and called it home. It was 730pm and we had been moving for 10 hours. We quickly unloaded the boat and Tony pitched the tent while I boiled water and “cooked up” one of our “emergency” freeze dried dinners (MH Italian pepper steak) with a mint Milano chaser. 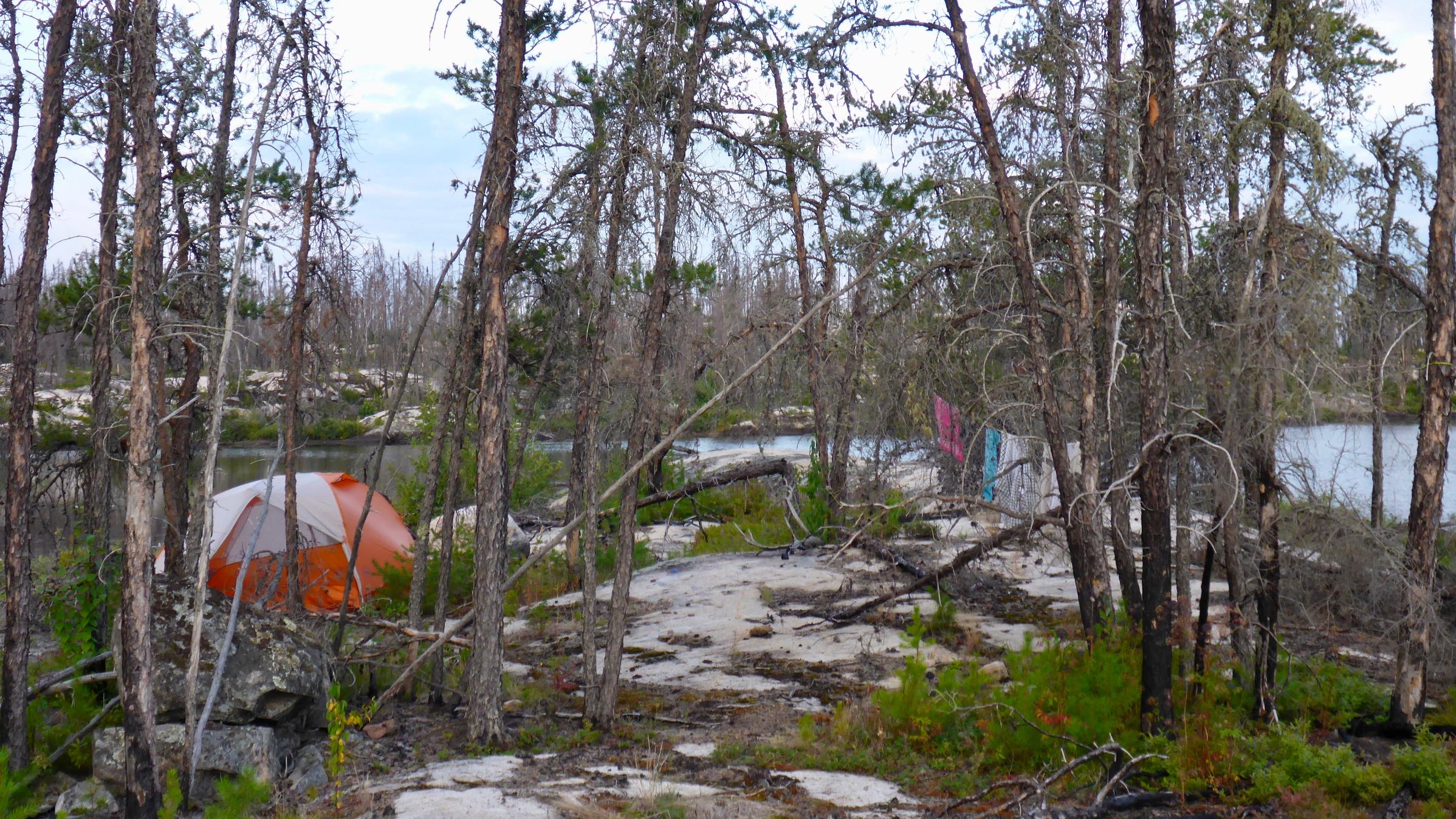 For an “any port in a storm” camp it was quite lovely and it felt amazingly good to lay flat at 900pm as the sun set pinkly to the west. Lots of moose tracks and poop today but no moose, maybe tomorrow. We fell asleep trying not to think about having to retrace our steps on the way out. I’m eating all of our heaviest food first, definitely. 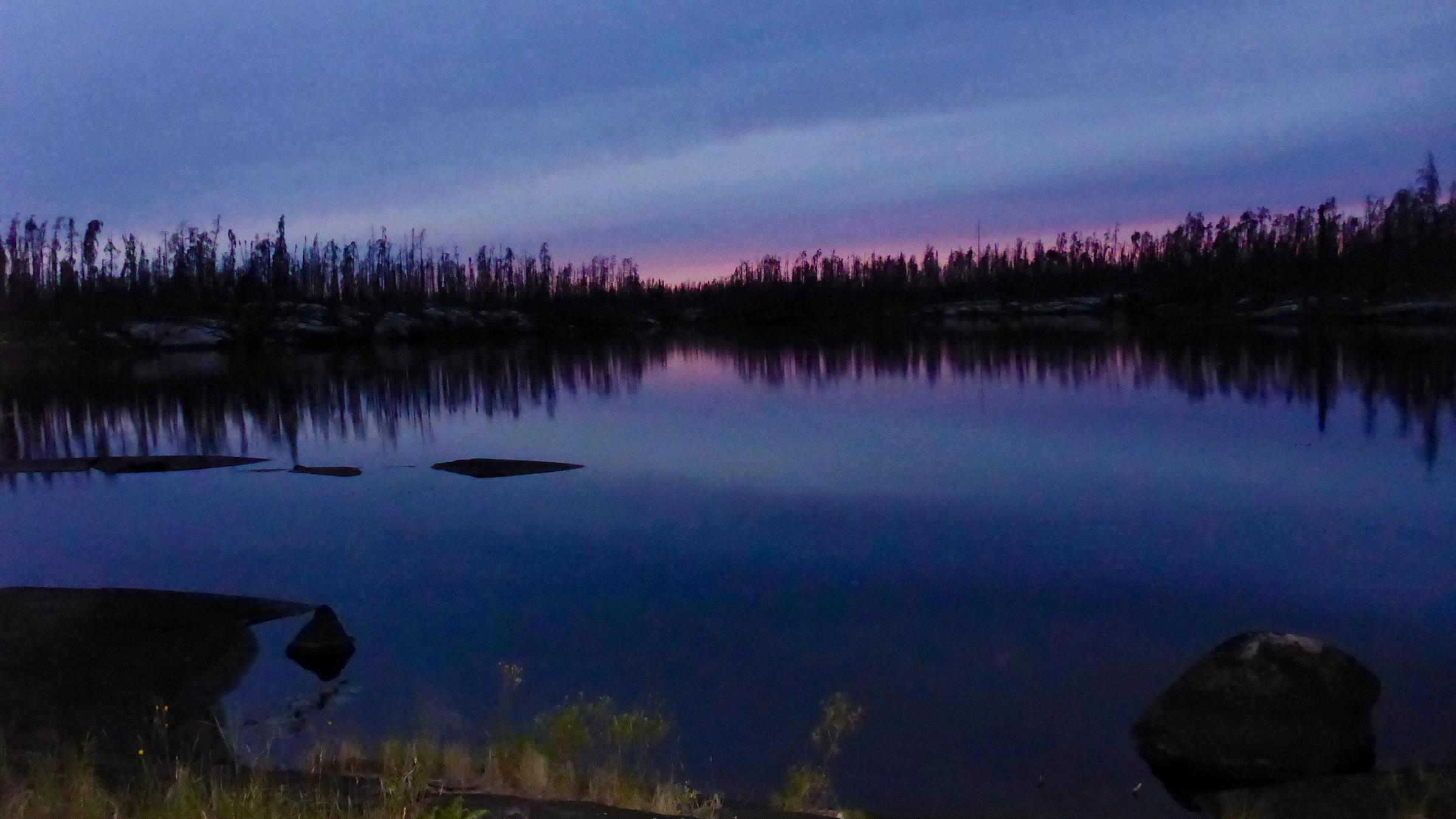 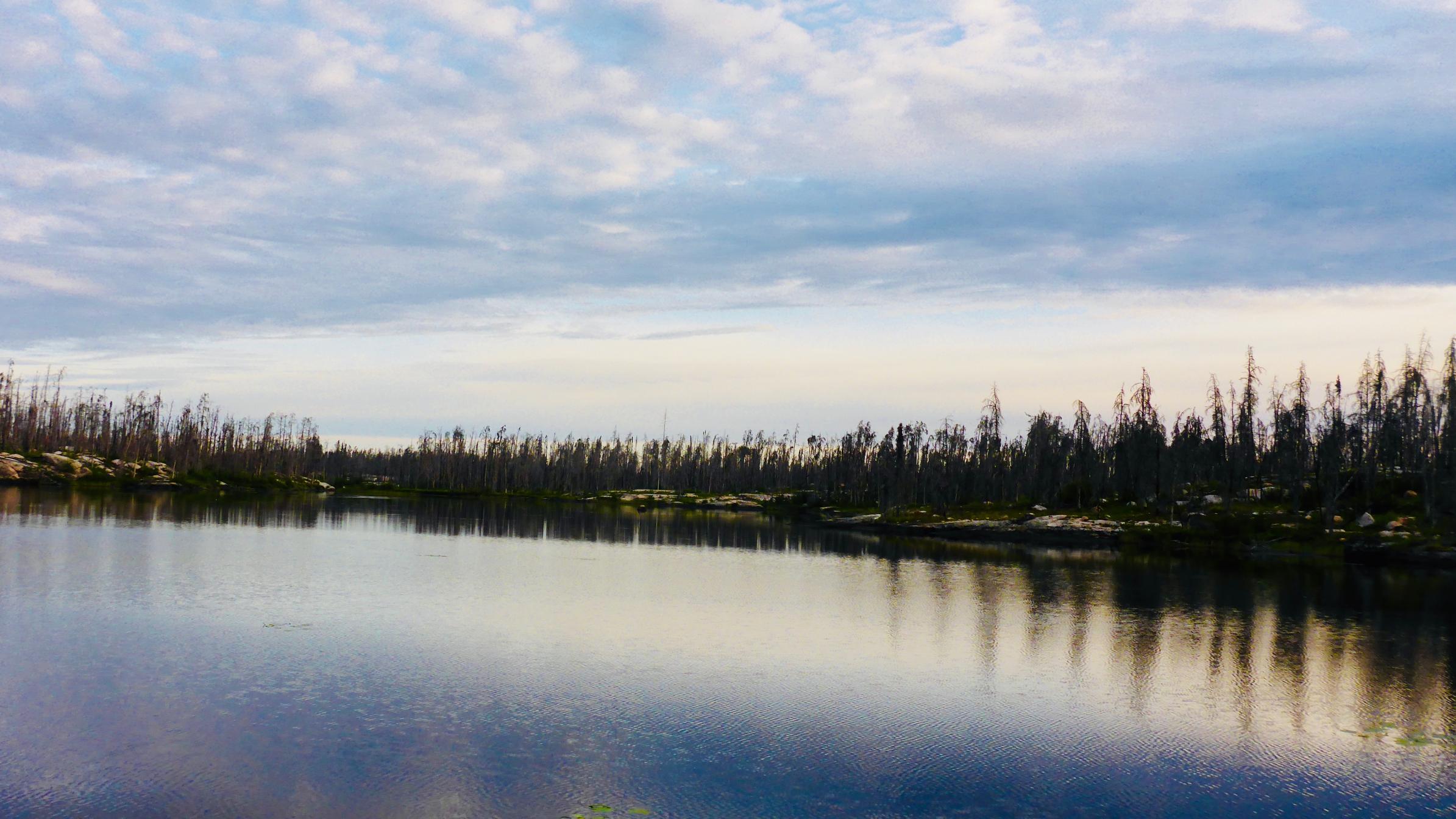 Well, we got up determined to make it OFF the Garner River and into Haggart Lake for a swim in order to wash of the muck and leeches. We had to pull the boat up the river and lift over a narrow rocky spot in order to find the next blue-taped, 80m portage and then we actually snuck by a rocky obstacle (ob) without having to remove the bags from the boat. How unusual, things are looking up. We floated by a bear taking a bath in the next lake. 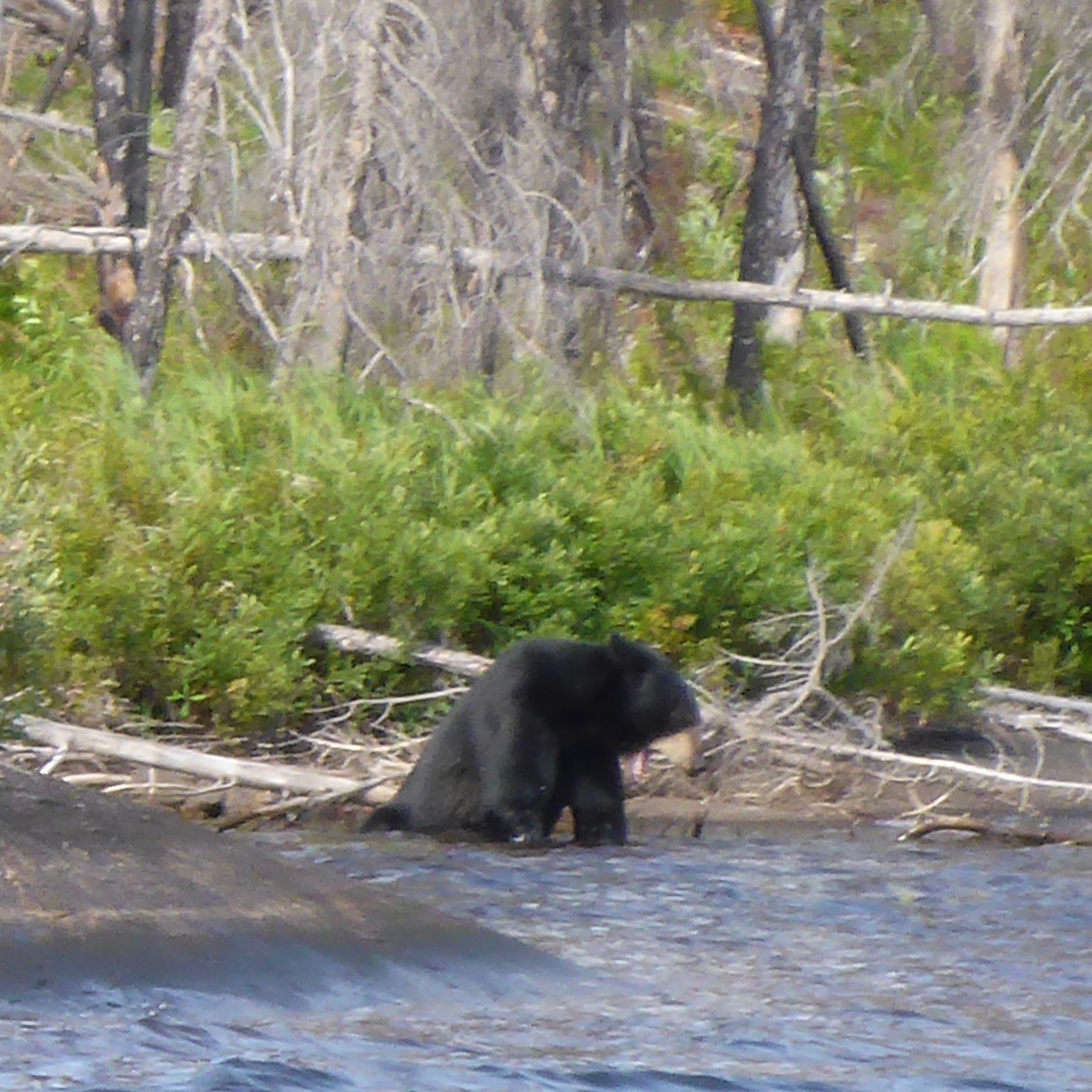 Tony tweaked his knee and we decided to triple portage the next 50m and 150m portages. Given that we were both tired and we didn’t want to tweak anything else it seemed the safest. We saw another bear grazing near shore but it didn’t like our presence and raced up a hillside. The amount of ripe plump blueberries is phenomenal and it’s easy to grab a handful while walking back to grab another portage load. 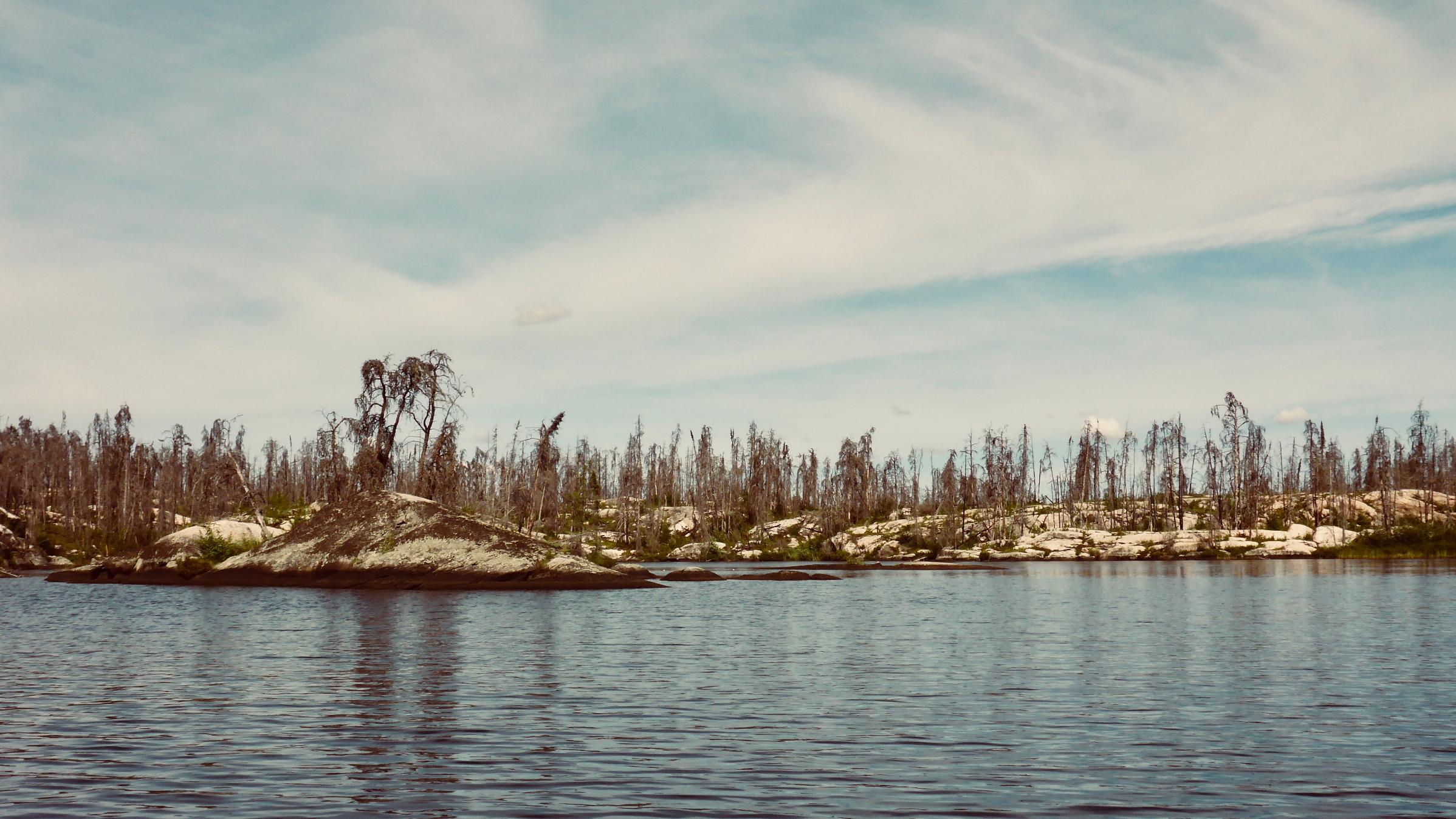 We had lunch just before the 400m portage into Haggart and then paddled blissfully to an unburned island camp for swim in the sunshine. We watched an osprey fish the lake while our clothes dried in a light east wind. Tomato-basil pasta was on the menu for dinner with a fresh carrot cake baked for dessert as the sunset. 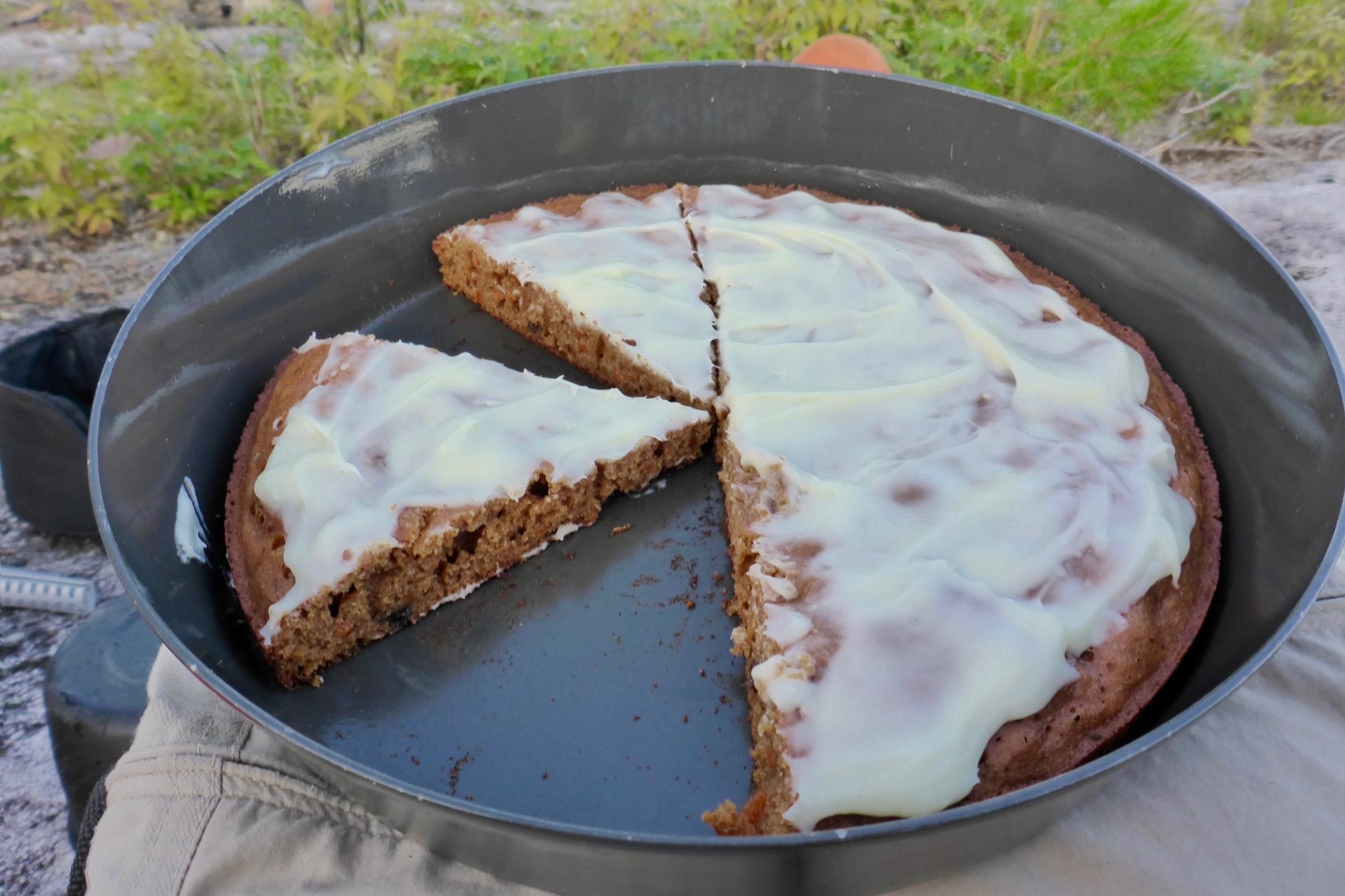 No LONG portages tomorrow. We’re gonna go fishing! We retired to the tent under an awesome moonrise. It seems we left all the mosquitoes in Manitoba. 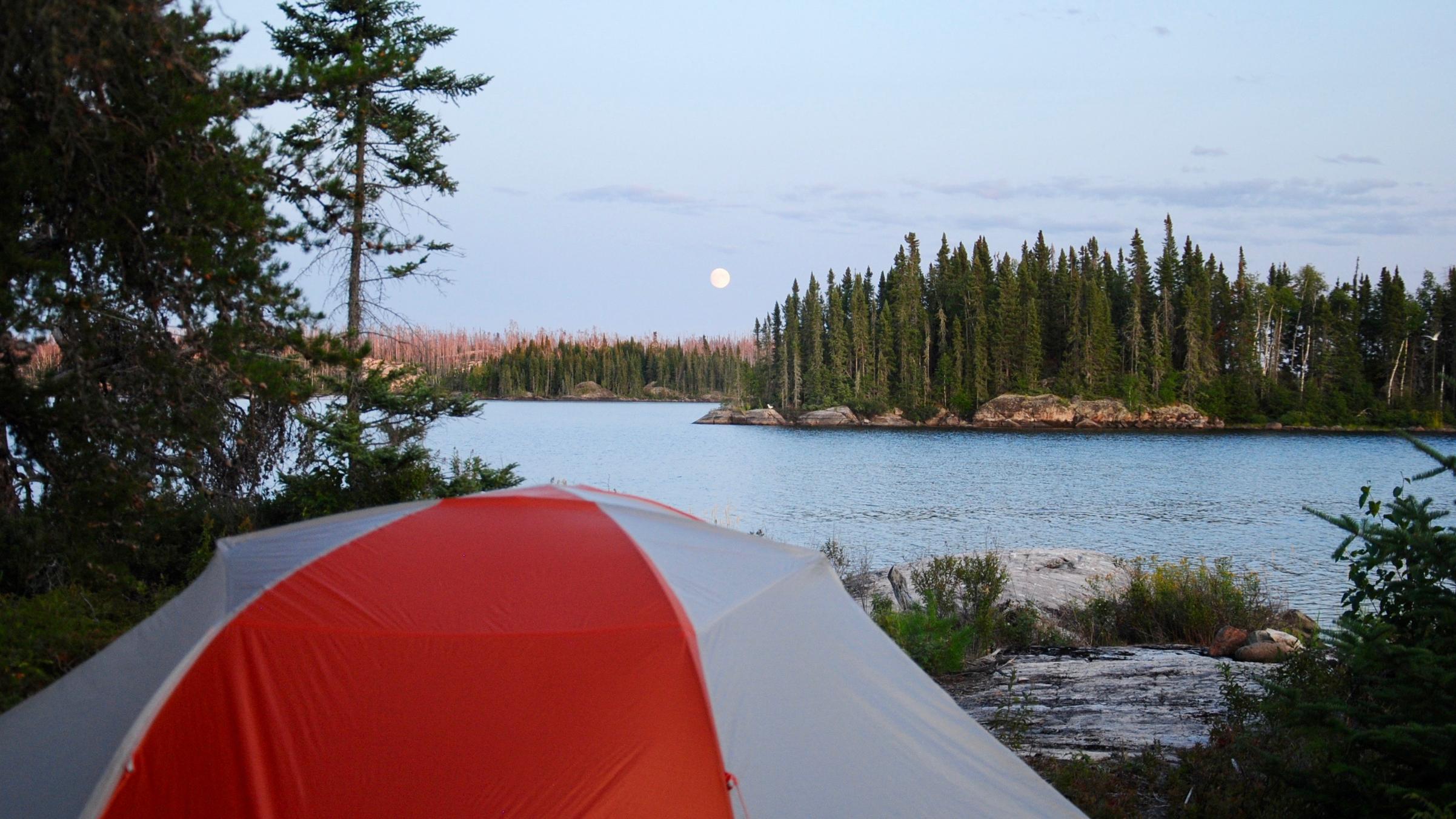