A jaunt around the numbered lakes with Julia Child
by dogwoodgirl

Trip Type: Paddling Canoe
Entry Date: 07/26/2006
Entry & Exit Point: Lake One (EP 30)
Number of Days: 5
Group Size: 7
Trip Introduction:
Our 3rd annual family trip- My hubby and son and I take other trips each year, but we also take one with another family. The pace is slower, and the pleasures of another sort. Well, you'll see!
Day 1 of 5
Wednesday, July 26, 2006
The morning dawned mild and sunny. We rolled out of bed with great anticipation, although we’d been
up way too late the night before. My goddaughter Alex had driven up from Kansas City to join us on our
annual “family” trip, and we’d stayed up pouring over maps, menus, repacking her gear, and loading
the
car. Alex hadn’t been to the B-Dub in many years, and had borrowed most of her gear from my pile of
retired equipment- a rain poncho, polypro long johns, and my ancient ex-kitchen pack(a choice that
would come back to haunt us). I take several trips each summer, but one is reserved for a fairly large
group of kids and adults, and this was it. Soon my friend ML drove in with her car loaded down and her
kids bouncing around in keen anticipation. Our group this year numbered 7- myself and my hubby Bob
(both 47), my son Jesse(23), Alex(also 23), ML(45) and her 2 kids Jules(12) and Aurora(10). We had
planned to have 1 more adult and his canoe(my friend Gary), but he’d had to pull out at the last minute,
so we were down to 2 canoes- a tight fit but we’d make it. We did one last quick gear check and
headed
north to Two Harbors for a big breakfast at Judy’s Cafe- a tradition for this crew, as hungry kids are
crabby kids!

Soon we were back in the cars, blasting up Hwy. 2 towards Ely, where we picked up a couple life jackets
from the nice folks at Voyageurs North and extracted the kids from the gift shop. We headed over to
the
ranger station and the young folks watched the video while us old folks talked to the ranger and got
our
permit. I picked up an interesting tidbit of info from the ranger- those cryptic numbers on the latrines
actually identify the campsites on each lake in case of an emergency. Good to know! Again, the children
were forcibly extracted from the gift shop, and before we knew it we were pulling into the landing on
Lake One. It was a pretty late start, but I’ve learned to just roll with the punches where kids trips are
concerned...I had hoped to get to Lake Four today, but I was starting to have a sneaking suspicion that
this was not in the cards, since it was already noon.

We decided to give everyone a chance to paddle and portage a bit, so we took the route through
Confusion Lake, with it’s 3 short portages. It definitely slowed us down, but it was good for the kids to
stretch their legs frequently after sitting in the car for 2 hours! Besides, it’s really a pretty paddle with
several breaks, so the kids could paddle some of the short hops, and I like Confusion Lake. By the time
we cleared the final portage out of Confusion, everyone was pretty hot and hungry and we started
looking for a campsite. Just when I was thinking that we were going to have to portage into Lake Two,
we lucked out and found a sweet little spot tucked behind a peninsula/island on the East side of the
lake. It had a huge standing stone- our own personal Stonehenge. The tent pads were sort of sloped,
but workable, and we piled out of our overloaded canoes and laid into a quick lunch of trail mix,
bagels,
and cheese.


The kids went swimming and we set up camp. We soon discovered that we had a camp “host”- a
voracious red squirrel who got named “Sam”.....I’m not sure why. Sam would climb into the bear barrel
if
it was left open for a minute, so we had to be on our toes. Jesse, Aurora, and I went off in search of
wood and hit the jackpot- a huge jack pine across the bay had fallen years ago and pulled down it’s
smaller neighbors, so there was loads of dry wood waiting to be sawed up and brought to camp. Alex
snapped this shot of us returning and christened us “Paul Bunyan and his Babes”!


Dinner is everyone's favorite part of these trips- we eat like kings and I had pulled out all the stops this
year, thanks to some great ideas I’d gotten from the camping recipe forum. Our first night pretty
standard- burgers , cheesy rice, and peach cobbler for dessert. I made a pot of coffee in the french
press and hot cocoa for the kids, and we sat around the fire watching the lake fade into the night, and
the beavers who were busy ferrying sticks around the bay. 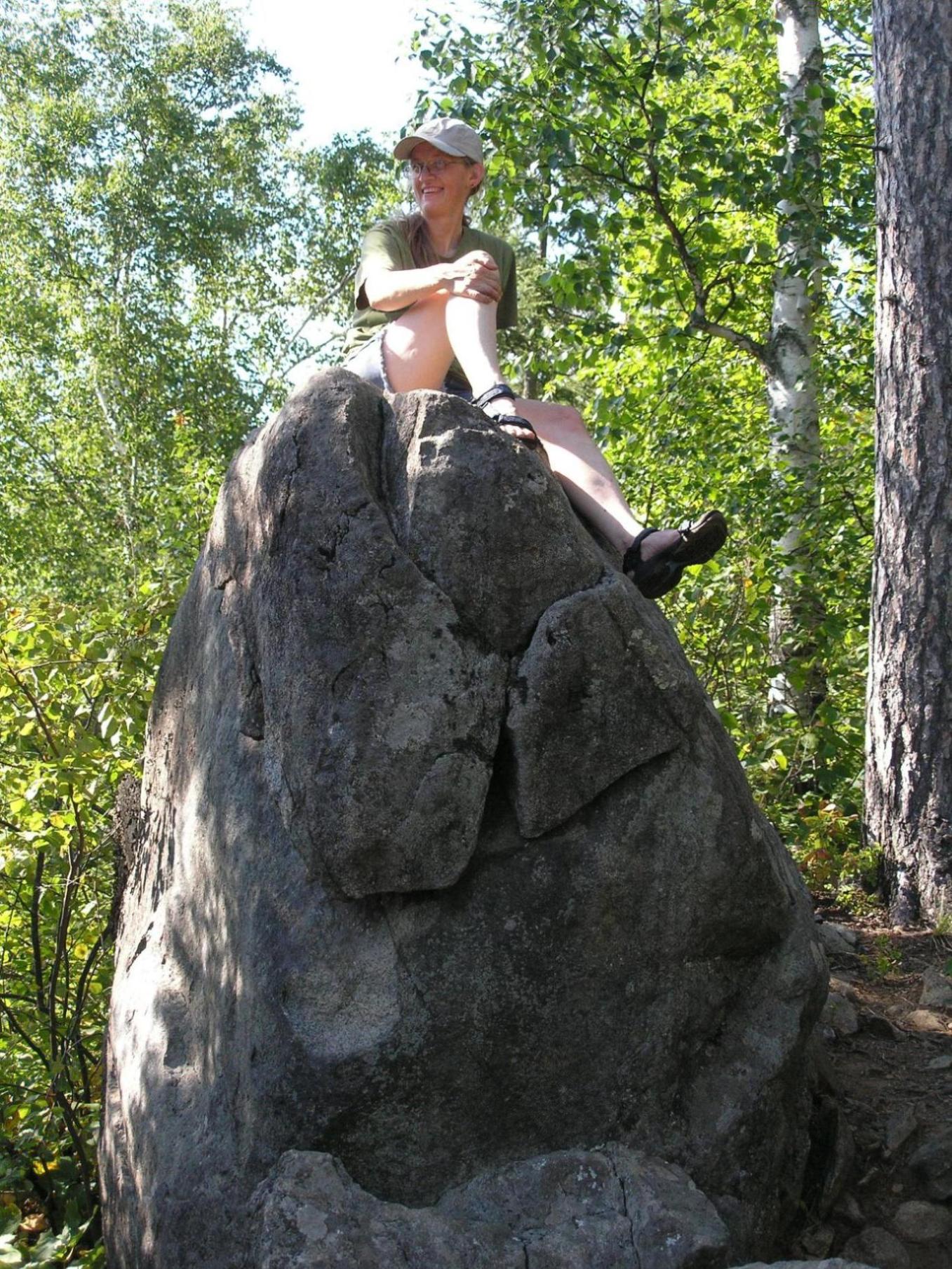 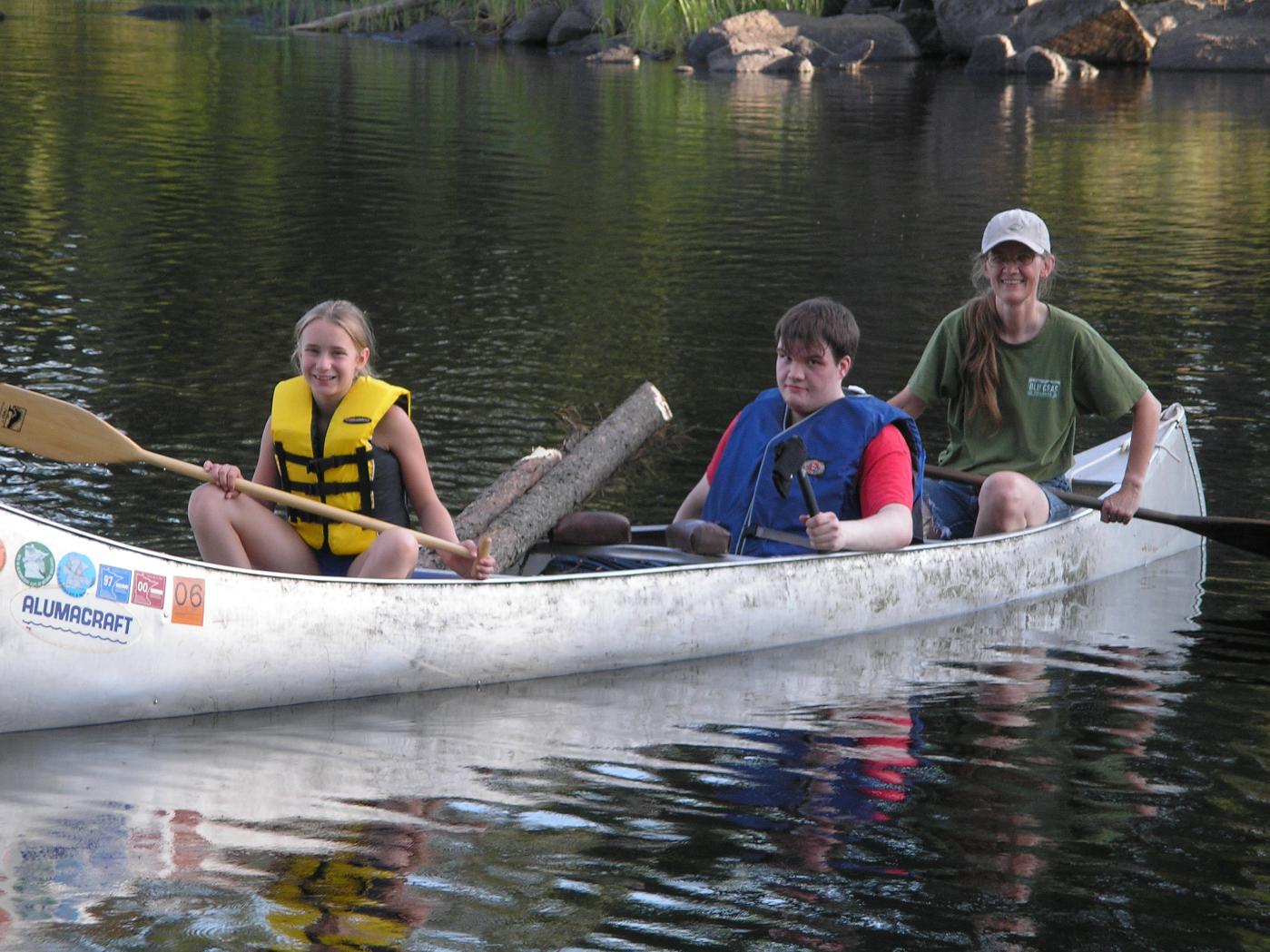 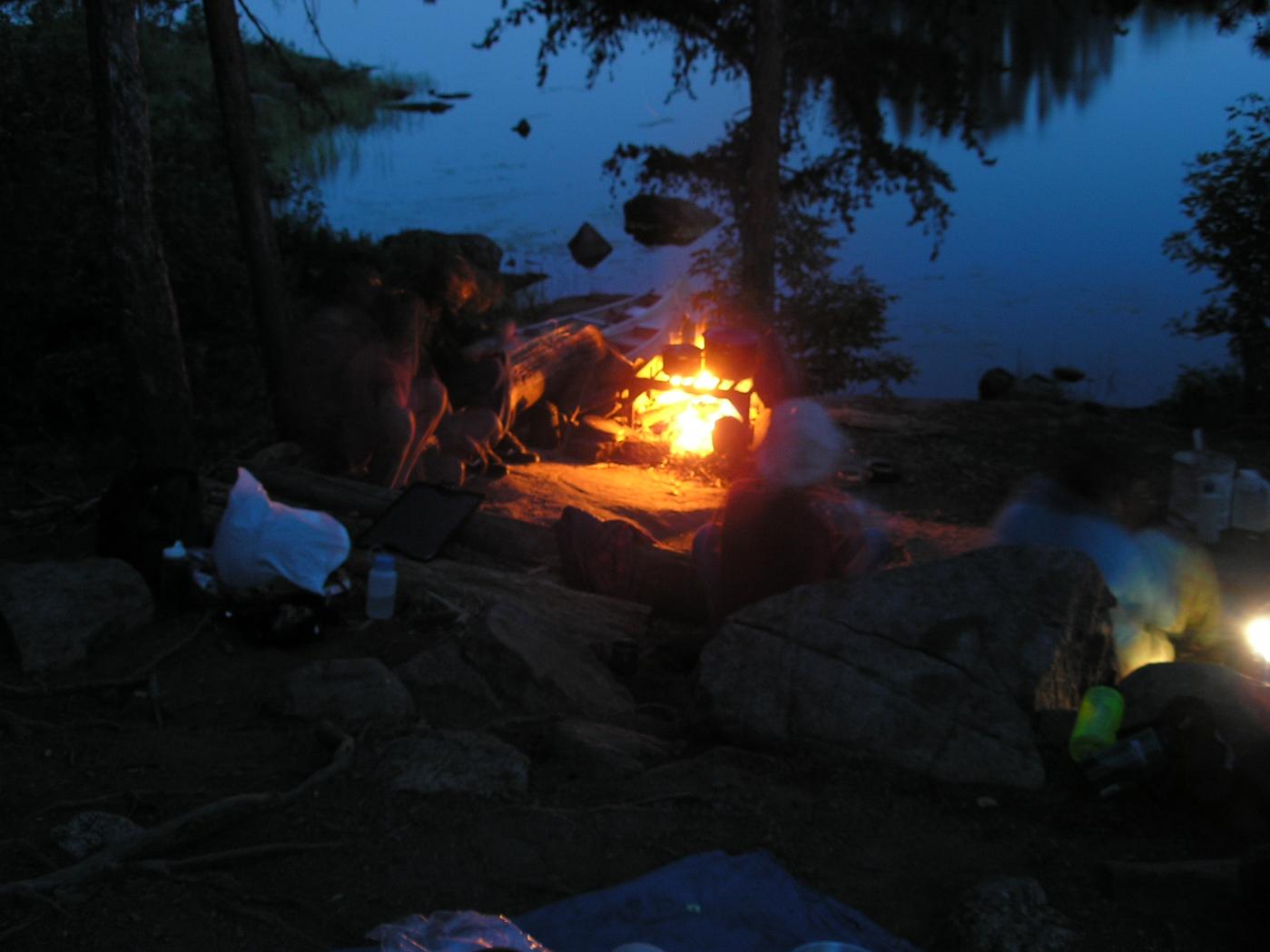