Social Distancing via Canoe
by TrailZen

Trip Type: Paddling Canoe
Entry Date: 03/21/2020
Entry & Exit Point: Other
Number of Days: 1
Group Size: 2
Trip Introduction:
March 19th we received an email from Piragis reporting flurries & 3 inches of snow in Ely. In western NC, wildflowers are everywhere and we've had temps in the 70s. Today we decided to dust off the canoe and check for wildflowers along the shore of Lake Jocassee in upstate South Carolina.
Discuss Trip: View Discussion Thread (7 messages)
Report
We've been practicing social distancing in the woods while checking out spring wildflowers in western NC and upstate SC. Today's forecast was for sun with afternoon temps in the upper 70s, so we loaded the canoe and headed for South Carolina's Devil's Fork State Park on Lake Jocassee. We felt we could responsibly "social distance" via canoe as well as on trails, and there might be wildflowers along the shore. Upstate SC has a rare wildflower blooming this time of year, and we've seen it around Lake Jocassee. Sure enough, about 30 minutes paddling got us to a nice patch of Oconee Bells (shortia galacifolia) at water's edge, and many more up the steep banks.

Oconee Bells along the shore: 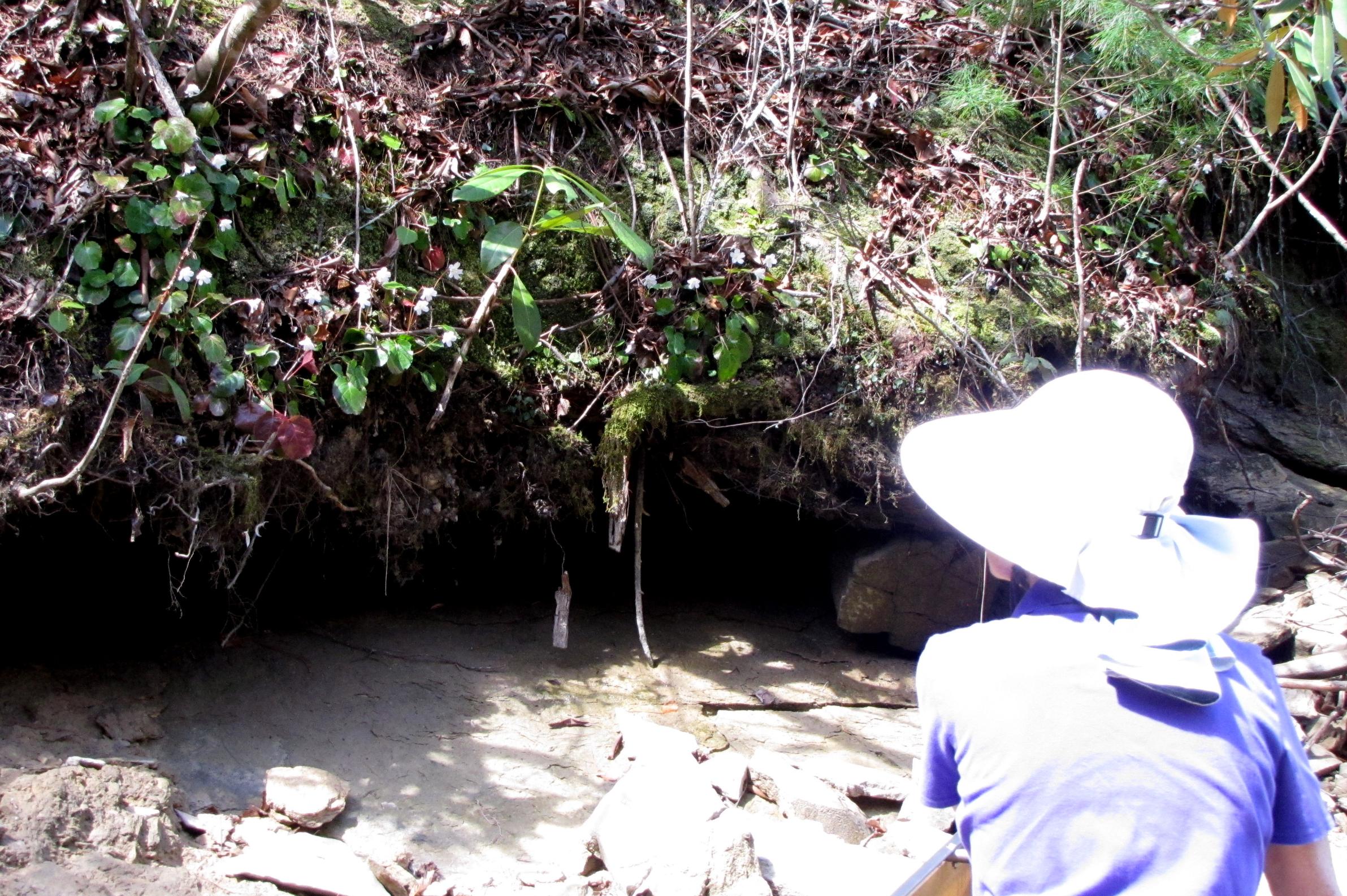 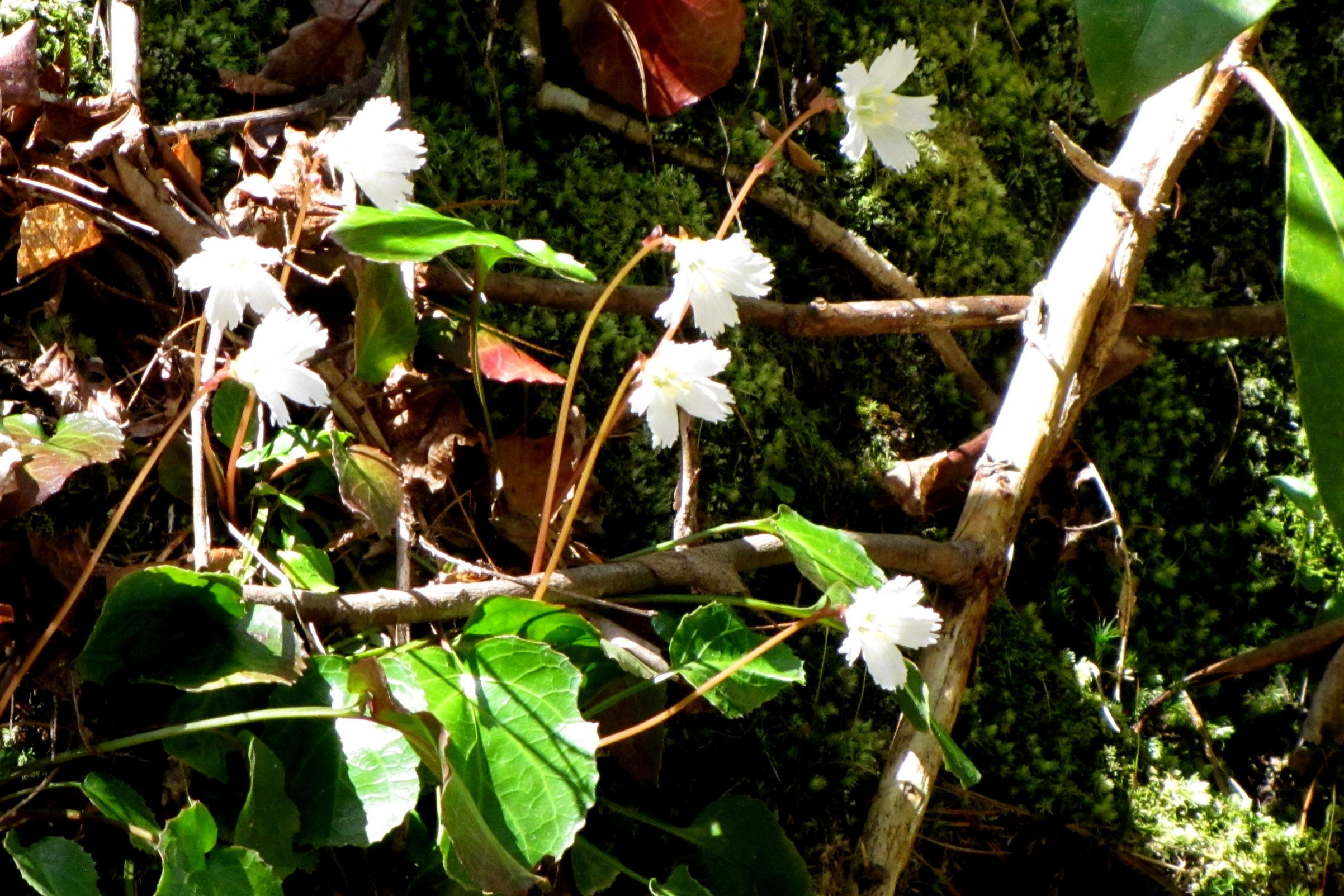 While we didn't have the lake to ourselves, it wasn't crowded, and the motorized traffic had no interest in the coves we were searching for flowers. 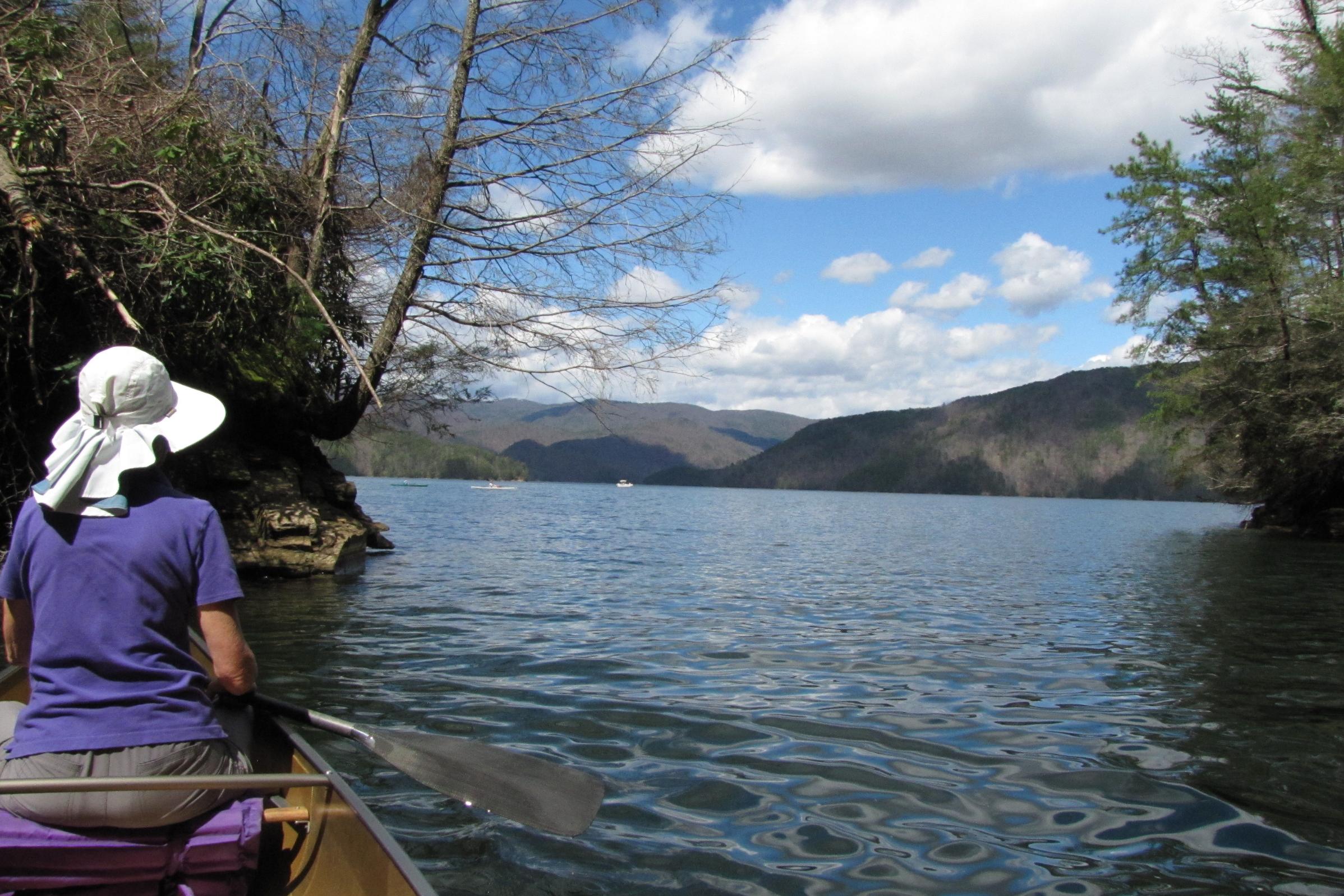 Another wildflower we've only seen in South Carolina is often smelled before it's seen. While paddling near the shoreline, we caught the scent of cloves and stopped to look for Pygmy Pipes (monotropsis odorata). A few minutes of sniffing the air and looking carefully among the leaf and pine needle litter rewarded us with a nice cluster of the tiny purple and brown flower. 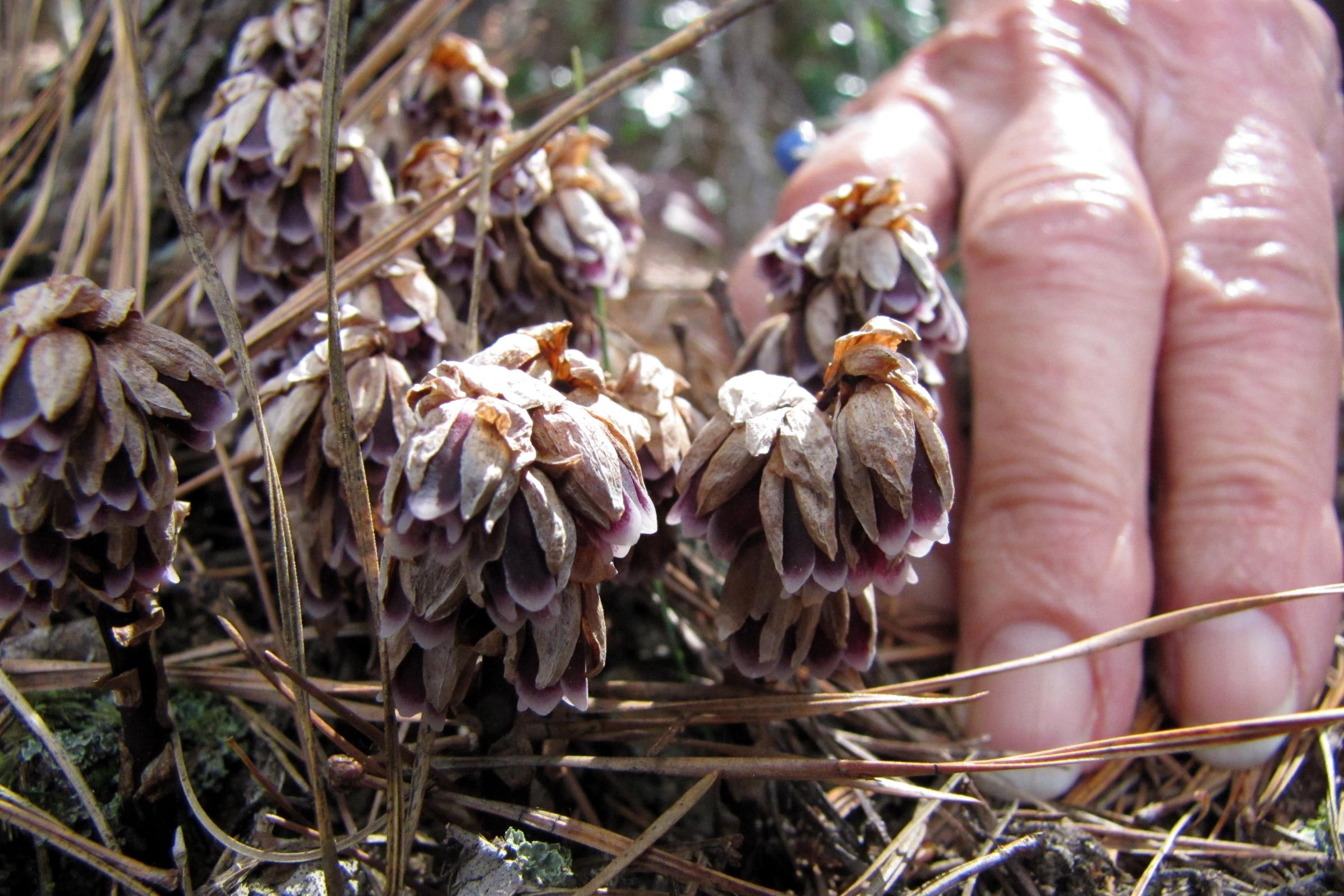 While Lake Jocassee isn't considered moose country, we did spot a moose there today. 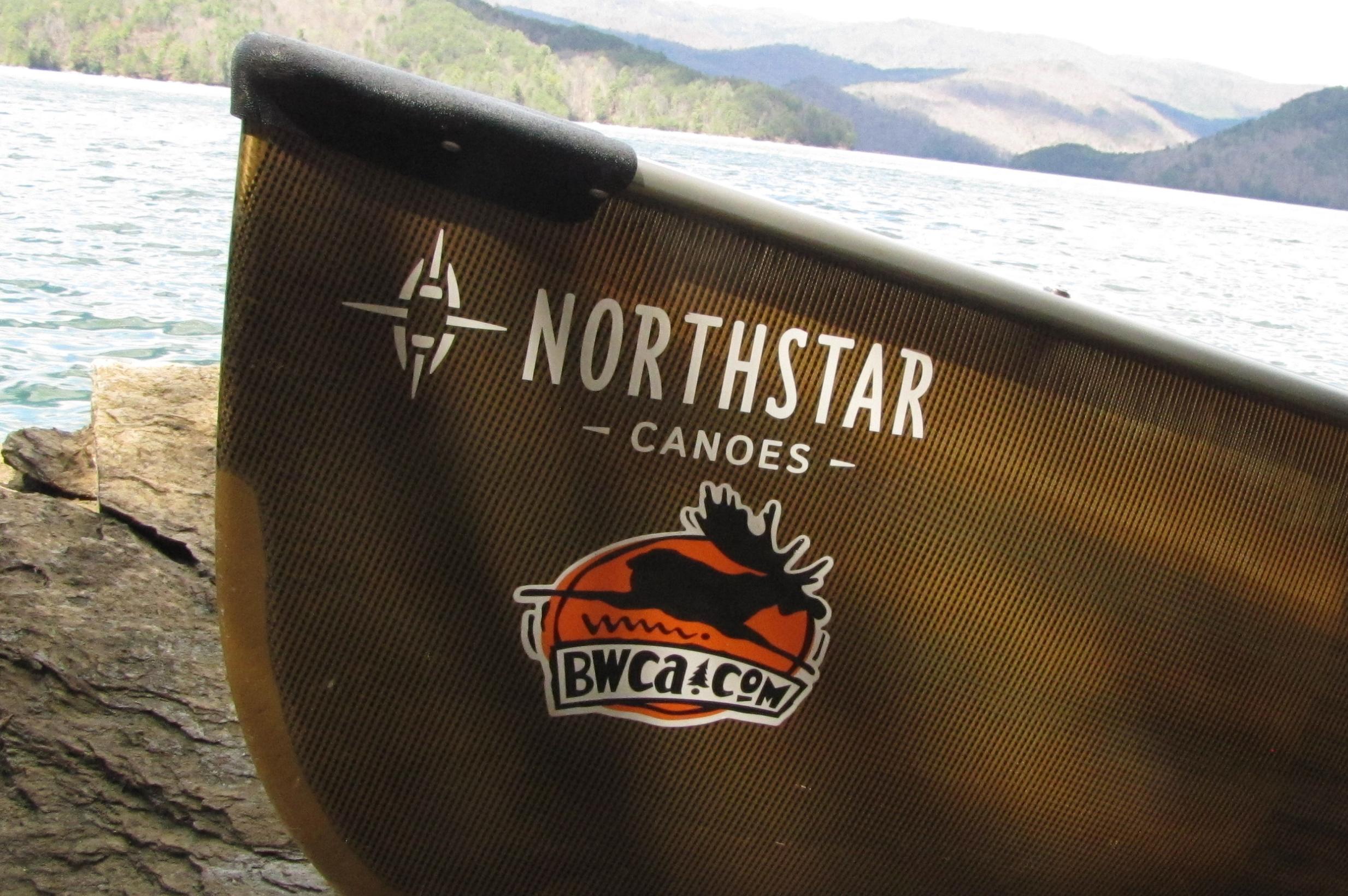 Another wildflower frequently seen on disturbed soils is Trailing Arbutus (epigaea repens), and we saw several nice examples along the shore, 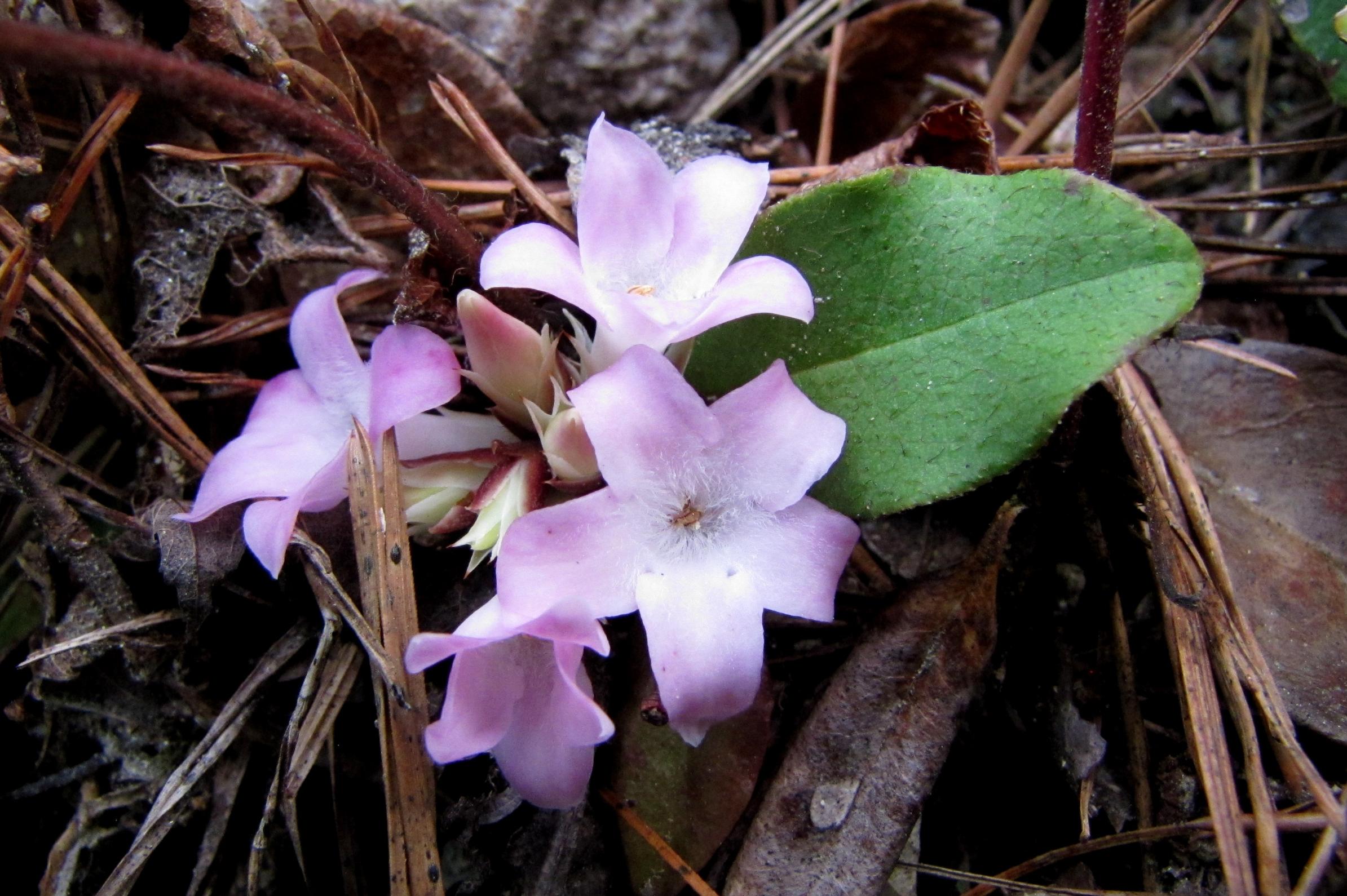 After a few hours on the water, we loaded the gear and canoe and headed for home. As we exited the park around 4 pm, my dashboard thermometer read 81 degrees! Hard to think about snow in Ely...
Back to Trip Report Main Menu