Trip Type: Paddling Canoe
Entry Date: 06/15/1968
Entry Point: Other
Exit Point: Daniels Lake (EP 61)
Number of Days: 15
Group Size: 8
Trip Introduction:
This long trip report was created from a few surviving journal pages, notes in the margins of maps and memory. I was 16 years old and this was for sure the biggest adventure I had been on in those years. This was a BSA trip, Troop 16 Milwaukee County Council. The trip precedes any designated wilderness and Voyageur National Park. Photos are Instamatic Camera quality and scanned from poorly stored slides.
Discuss Trip: View Discussion Thread (7 messages)
Report
Prologue

Nineteen and sixty-eight, not my first canoe trip, but the first to the boundary waters, seven teenage Scouts and one adult leader set forth from western Rainy Lake bound for Grand Portage in fifteen days. It had rained hard for 13 days straight before we started; a fact that would impact our travel in the days ahead.

We did our first overnight canoe trip in Forest County, WI in 1966 and were captured by the idea. In 1967 we spent a week in the Manitowish River watershed out of Region Seven Canoe Base. There we got a good education in the basics of canoe travel. Later that summer our adult leader visited the country north and west of Lake Superior on a family vacation. We were all for the idea when he suggested we travel the Voyageur's Highway route on a two week adventure. It would be the first of many annual canoe trips that the Voyageur Patrol of Troop 16 would do in the Boundary Waters and on the Saint Croix/Namekagan River.

Except for canoes, paddles and packs we organized our own gear and food. Bill Rom provided us with just the right packs and three canoes. He encouraged us and we spent a late night around the maps making notes and adding details to our itinerary. 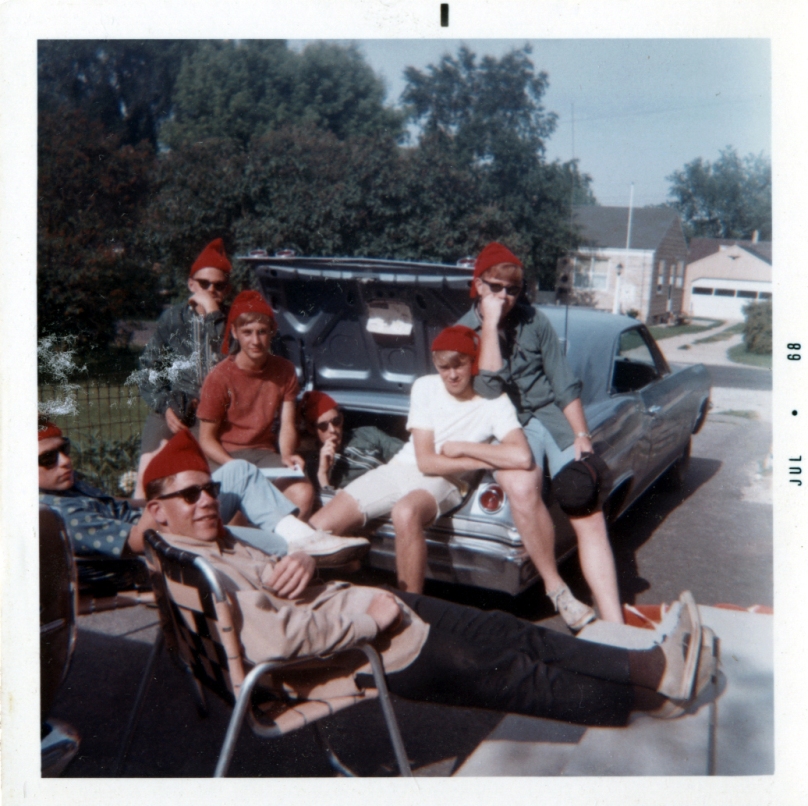 Gathering for the drive

At 11:00 AM at Dove Point, after the drive from Ely, we donned our red voyageur toques and shoved off into Rainy Lake. A good west wind put some miles behind us, but it was the roughest water we had ever traveled on. Cautious, but exilerated, we had a good first day to camp in Brule Narrows.

Another breezy day on Rainy Lake. Traveling close to shore and using the shelter of islands we made our way to Virgin Island. We know we need to make better mileage in order to reach Grand Portage on time, but wind frustrates our efforts on the big lakes.

We finally cleared Rainy Lake late with our first portage around Kettle Falls. A friendly Boise Cascade ranger(at that time Boise cascade owned much of what is now Voyageur National Park) visited us at our camp on Namakan Island. He had lots of experience on the boundary route and talked with us about changing our menu if we were to make Grand Portage on time. We were slow to start in the morning with a breakfast menu that required too much time. While we were cooking breakfast the best paddling time of the day was slipping by. By the time we were moving the wind was starting up for the day. He suggested eating our lunch snacks for breakfast along with the Tang and stopping at a campsite and cooking our breakfast for lunch as it was usually getting too windy for easy travel. Late in the afternoon, as the wind dropped, we could travel lots of miles before dark with the long June days. Taking his advise, we enjoyed some of most beautiful evenings on the water I have ever experienced.

We got that early start today, but ended up battling a tough south wind on Sand Point Lake. We finally gave up the battle and camped near the portage to Mukooda Lake. We cooked and enjoyed the breakfast at lunch and proceeded to nap away the afternoon. The wind never stopped.

The rail assisted portages on Loon River were fun and the falls were full and noisy. We made a few miles into Lac la Croix camping near the mouth of Snow Bay.

We ended up stopping early for a second camp on Lac la Croix. As we were astride Coleman Island the fog set in so thick that we couldn't see the other canoes unless we were bumping into each other. A dripping soaking atmosphere led to a damp, cold night.

Morning dawned much the same. We decided to have that good breakfast of bacon and French toast with hot chocolate and Tang. As we were packing up to travel we heard a sound that made us rather disoriented, thinking maybe we had gone mad. We all heard it and dropped what we were doing to listen closely. Singing, many voices, in French, "A la claire fontaine..." coming out of the fog. As the singing got louder and clearer four large canoes emerged from the fog each with 4 paddlers wearing red toques just like ours. They where from a school in Winnepeg, Manitoba started at Grand Portage and paddling home.

Noting that we shared good taste in hats they drew in close to visit. From them we learned of some dangers ahead. After we had started out at Rainy Lake the dam at Prairie Portage had burst sending a surge of water into the already high water after the 13 day rain event. They warned us to be careful approaching and setting out from the portages at Curtain Falls and on the Basswood River.

From Lac la Crox on we found our stride and began to cover some distance. Breakfasting and packing fast in the morning and using the long June evenings to keep traveling. We passed up some really nice campsites and ended up in some uncomfortable ones setting up camp in the dark.

Curtain Falls was roaring through the trees and we couldn't get to the portage landing. We had to throw ashore and bushwack to the portage. A similar situation faced us at the top. We had planned to lunch at Table Rock, but were really stumped when we couldn't find it. We were pretty good navigators and were pretty sure we were at the spot. Someone poked their paddle at the rock we were floating over and said, "that rock is flat as a table". 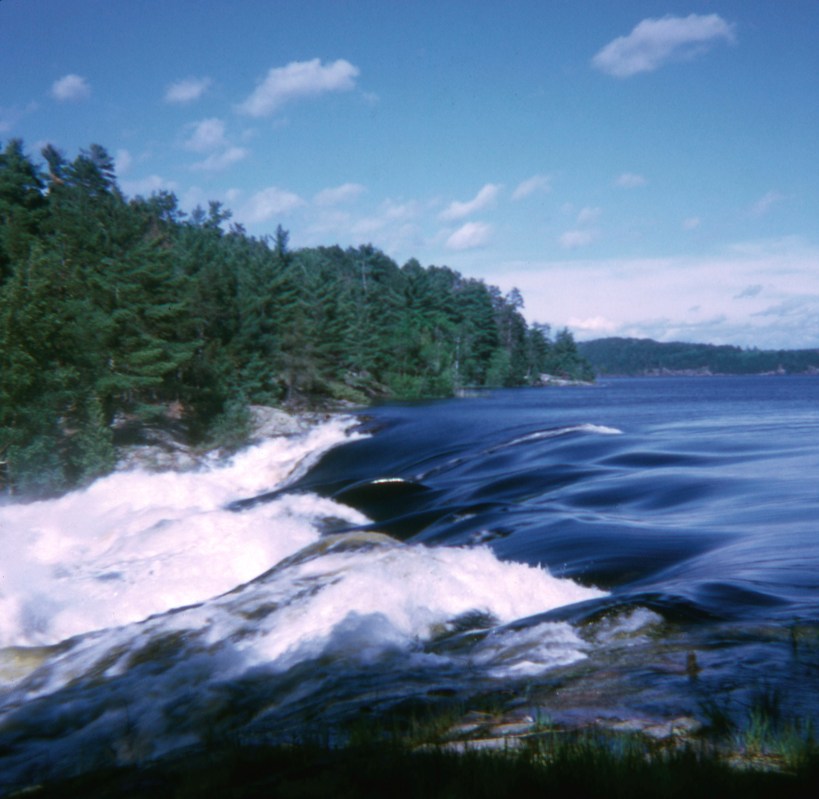 From our camp on an island on Crooked Lake near Saturday Bay we had a stunning sunset and heard wolve for the first time. 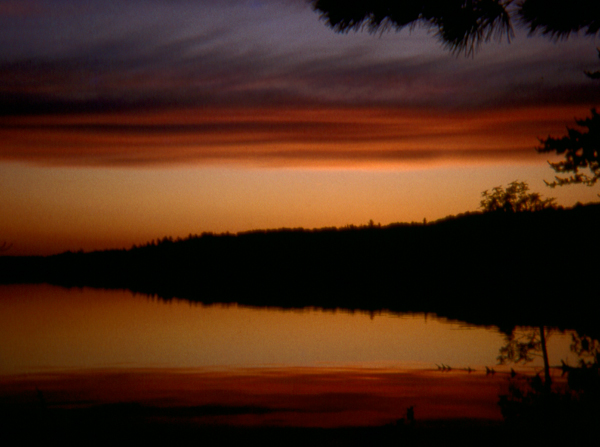 The narrow places in Crooked Lake had enough current to nearly have us dead in the water. We forged ahead, but were tired in this gloomy mizzlin' rain. At Lower Basswood Falls we decided to start the Basswood River portages fresh in the morning. We camped across from the falls and their roar became part of our dreams.

Basswood River was wild, with huge standing waves. We were thankful that the 1 1/4 mile long Wheelbarrow Portage turned out to be flat and easy. Finishing the portages in good time we made some miles on Basswood Lake to camp near United States Point. 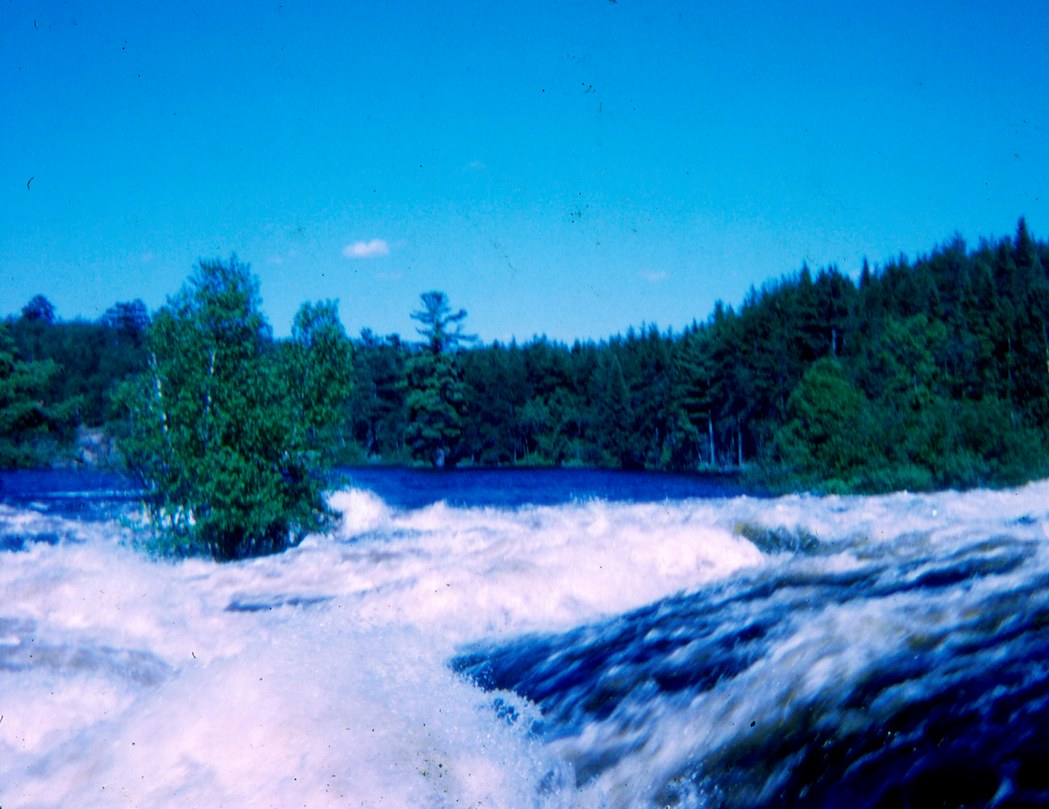 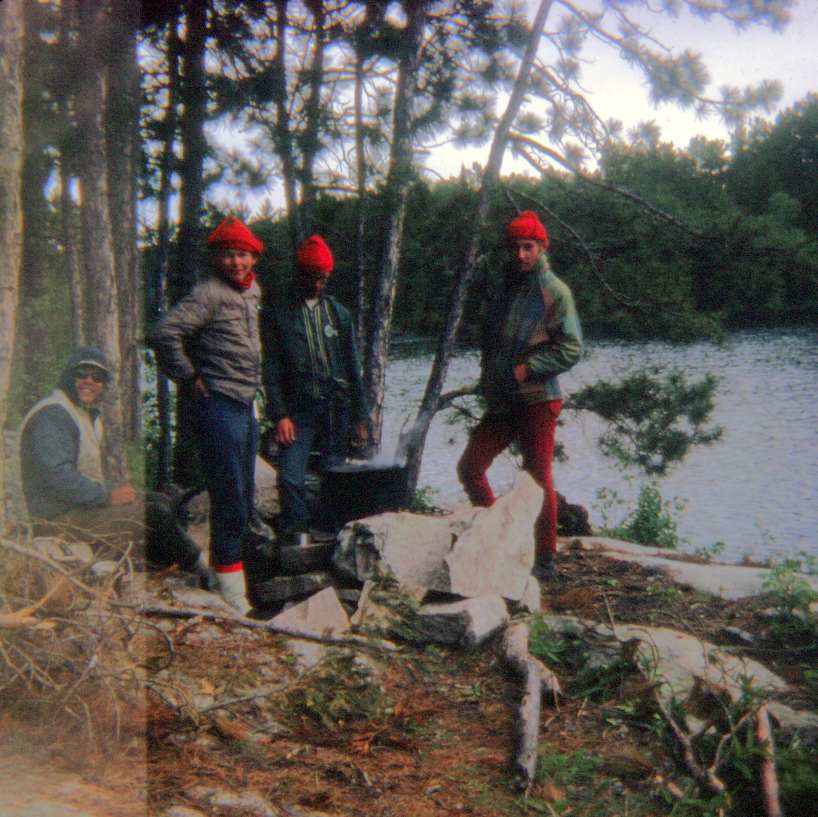 Gathering around the cook fire

At Prairie Portage we saw remnants of the old wooden dam. 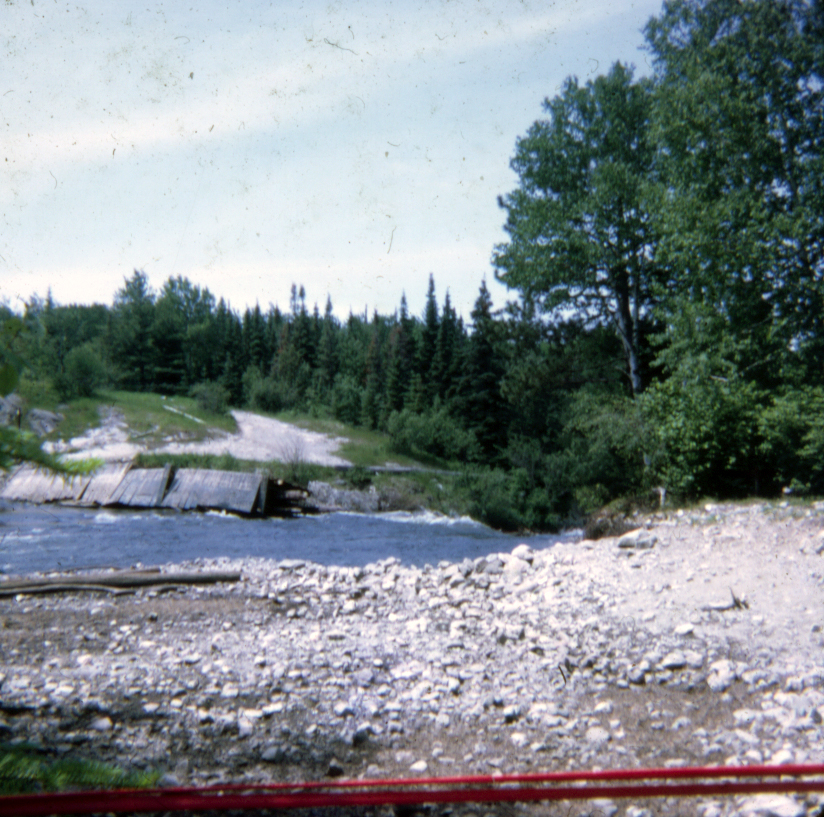 Remnants of washed out wooden dam

Sucker Lake was nearly drained making it a muddy, slippery mess to get on the water after Prairie Portage. There was also an extra portage in the mud to get through the narrows to Birch Lake. Birch Lake was also a bit lower and the first Knife River Portage had a mucky, slippery approach. We did all the Knife River portages and camped not far from Dorothy's island. We very much enjoyed meeting and talking with her and tasting her wonderful root beer. 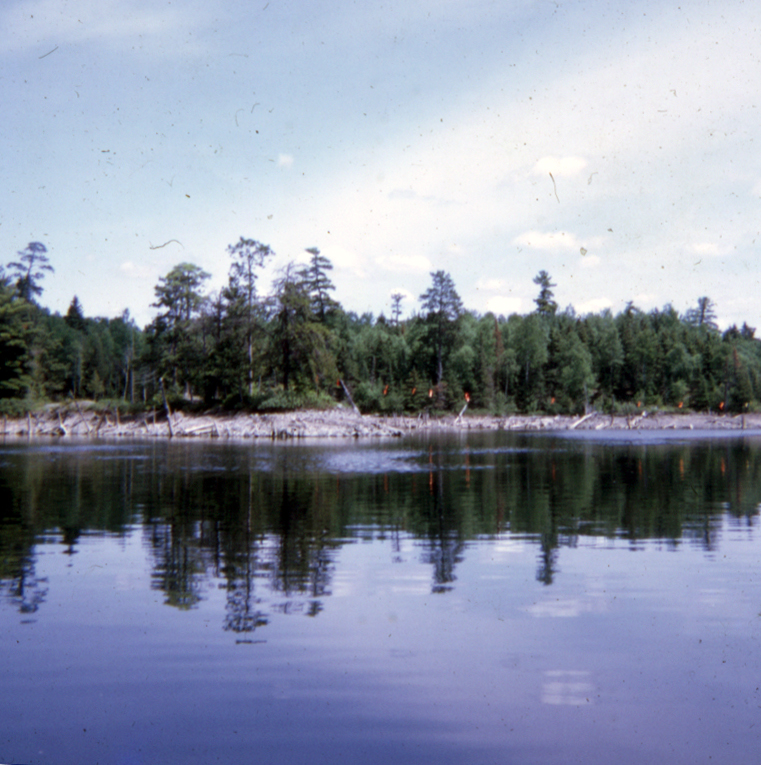 This morning at this Knife Lake camp that he heard words from our leader that we had never heard before. Usually not one to get overly excited, the discovery of an exploded container of apple butter in the pack basket put him in a mood we had never seen. The fermenting mess had coated everything in the pack basket. It took some careful cleaning to prevent this from being a virtual bear magnet. 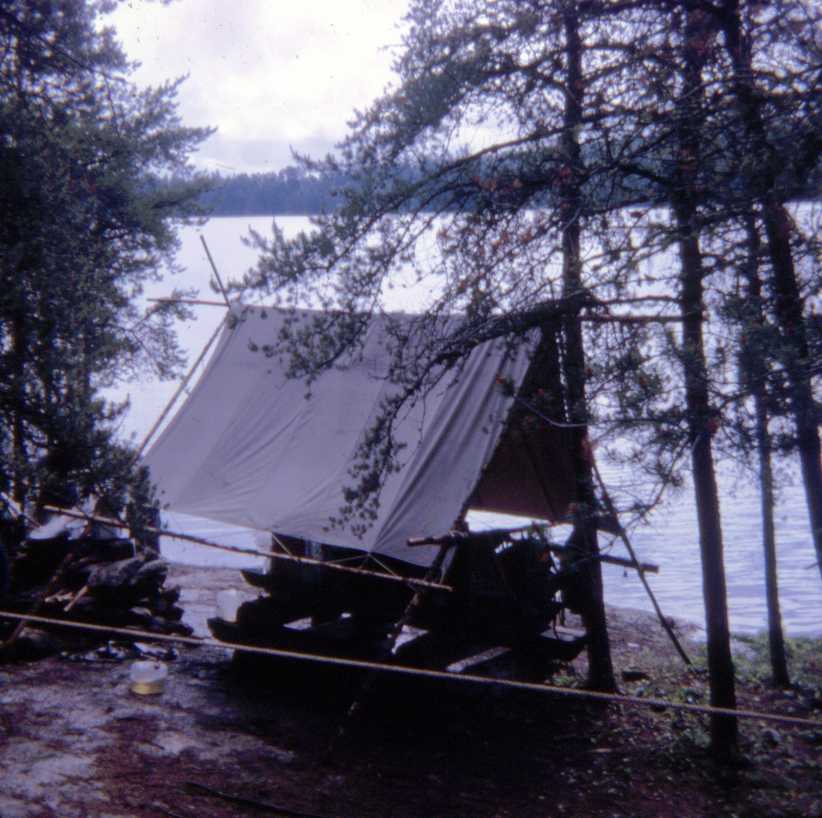 Campsite with table and tarp frame

We still got on the water early and had a big day all the way through Knife, Ottertrack and Saganaga. We camped near Saganaga Falls, poised to do the Granite/Pine River run to Gunflint in a single day. 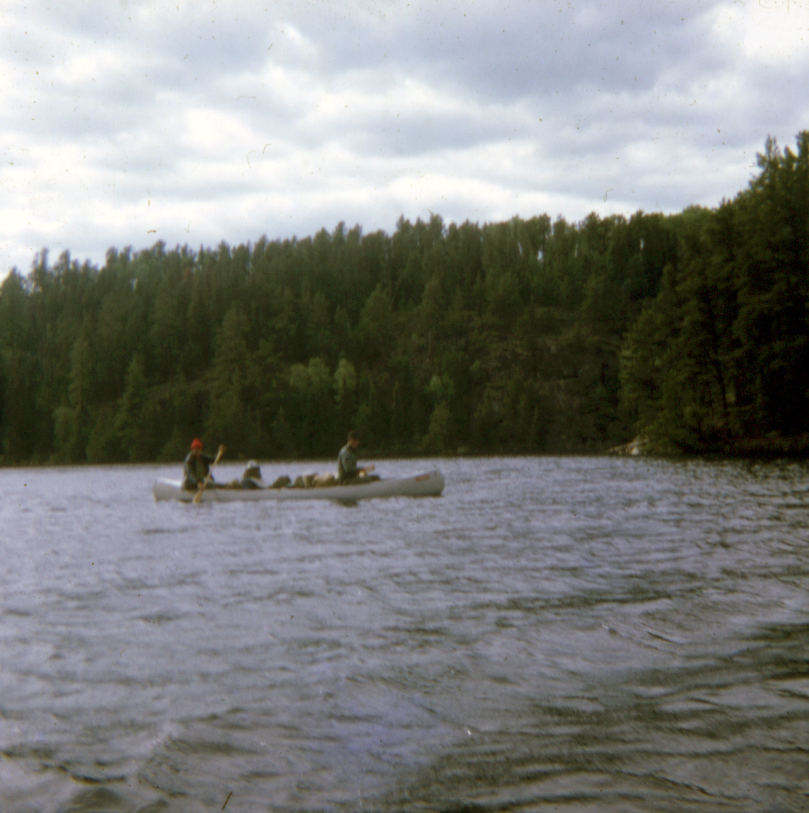 We started out very early, portaging efficiently and paddling steady. We stopped once a hour, like the voyageurs for their pipe break, but got right back to it after ten minutes. If we could do this we might make Grand Portage after all. 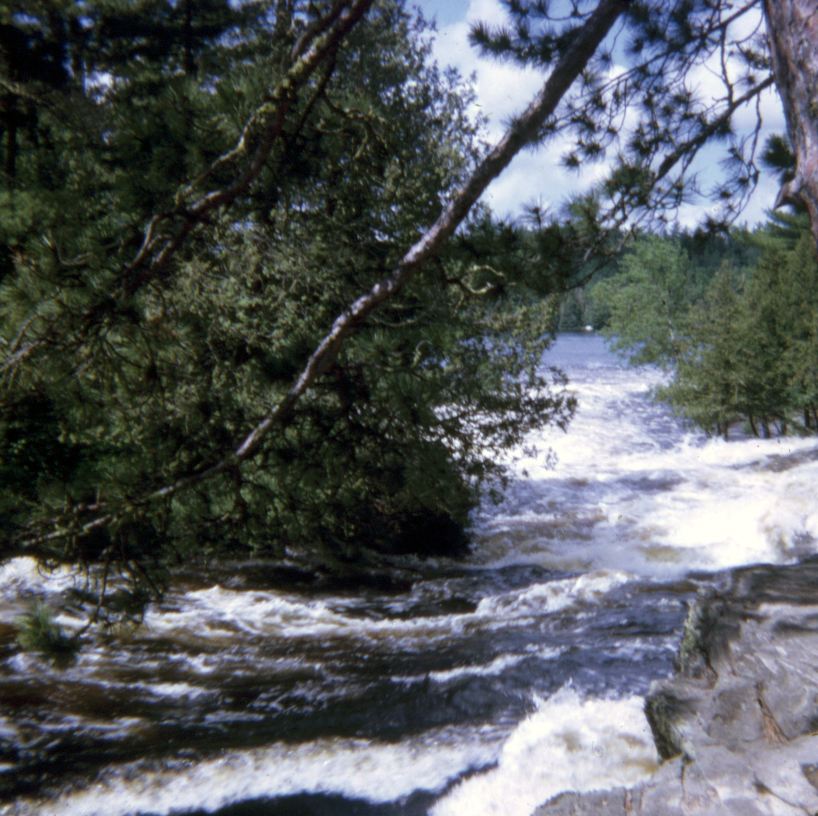 We hit Gunflint late afternoon stopping at Gunflint Lodge for ice cream and to call the folks plannning to meet us at Grand Portage. We told them we might be a day late and to not worry.

We had a rare calm evening on Gunflint and paddled to the eastern end of the lake before dark.

After a poor nights sleep on uncomfortable ground we were on the water early hoping to get beyond Long Portage by dark. We had a brief ceremony at the Height of Land Portage and kept moving. The wide open North and South Lakes were rough with a blustery wind off Lake Superior.

After a another day of hard travel, with flashlights handy, we began Long Portage in the twilight hoping to camp near the eastern end. We did a tentless bivouac at the end of the portage and were excited to start early and make another big day through Mountain and Moose to Fowl Lake. We felt the Long Portage was surprisingly easy given its bad reputation.

Sunglasses in hand I looked out to the lake deciding to pack them or wear them. I thought it odd that I was looking down at my shadow when I should have been seeing the sun rising over Rove Lake. We gathered to consult the map and compass. In our excitement to get over Long Portage that night we missed the turn off the old RR grade that the portage starts on and followed the grade gradually around to the west and the end at Daniels Lake!

The time it would take us to get back on track would have had us coming in to Grand Portage way too late for the comfort of our families. The decision was made to end our quest for Grand Portage. We had made a good run at it, learned a lot and traveled through some stunningly beautiful country. We would be back to do Grand Portage another time.

So, we spent the day on a leisurely tour through Daniels, West Bearskin and Hungry Jack Lakes to camp at the USFS campground on Flour Lake. We cleaned up the outfit and had a feast with the extra food while the leader hitchhiked to pick up our vehicle at Silver Bay. Someone living in Ely and working at Silver bay was shuttling for us, but we were a day early.

The day we were supposed to be arriving at Grand Portage on the trail we drove there and had two breakfasts a piece at the restaurant that used to be in the fort. We hiked up the mountain above the fort and enjoyed the view of Lake Superior. It was clear enough to see Isle Royale 26 miles out. We all stood close on that rock outcrop; a team toughened by rough weather, wet and rocky portages and long days of travel. We all would see more of this country in our lives. 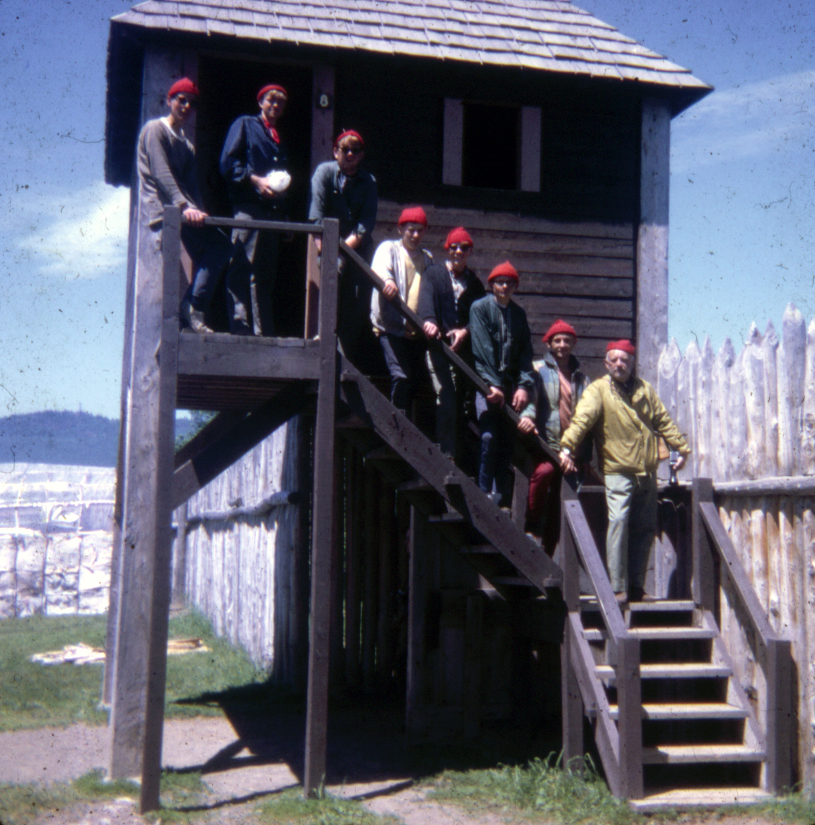 In 1970, we returned with some of the same young men to start at Saganaga and end at Grand Portage successfully.