To the Bay or Bust...an adventure of historic proportions
by straighthairedcurly

Trip Type: Paddling Canoe
Entry Date: 07/20/1989
Entry Point: Other
Exit Point: Other
Number of Days: 35
Group Size: 7
Trip Introduction:
We all have dreams. Little girls have dreams. For some, it might be to become a doctor, have a big wedding, or become a soccer star. But for some girls, the dream is to paddle to THE BAY..Hudson Bay, that is. Okay, maybe these girls are few and far between, but we are determined and passionate. This is the history of an amazing group of young women who came together to attempt this dream 30 years ago. The group included 6 teenagers and me, their 25 year old guide. I had accomplished my dream of paddling to Hudson Bay 7 years prior, and now I was thrilled to make the dream come true for 6 more young women. Note: three different journals were used in this summary of the trip (our official trip journal, a fun group journal, and my personal journal. I put journal words in quotes and the journal name in parentheses. I also added some memories that are not in quotes.
Discuss Trip: View Discussion Thread (11 messages)
Part 1 of 3
Route Plan #1: Start near Norway House, Manitoba and reach York Factory on Hudson Bay via the Nelson, Fox, Bigstone, and Hayes Rivers.

July 20, 1989 Day 1 (Nelson River) On the water at last! Our group had prepared carefully...practiced whitewater skills, meticulously planned and packed a month of meals, reviewed maps and old trip journals. We had launched from the Norway House ferry dock the night before around 10 pm, and had camped very close by. “We’re really doing it. I feel much more confident now that we have left camp and are actually committed. We will handle whatever comes our way and we will have a good time doing it.” (personal journal). Truer words were never written.

“The FIRST day. Every trip has only one first day (how profound) and this was a great one.” (group journal). We camped at Sugar Falls on the Nelson River and watched white pelicans fishing in the rapids. “The visibility this evening is a lot better than this morning when smoke from a forest fire outside of Ponton settled over the river.” (group journal) 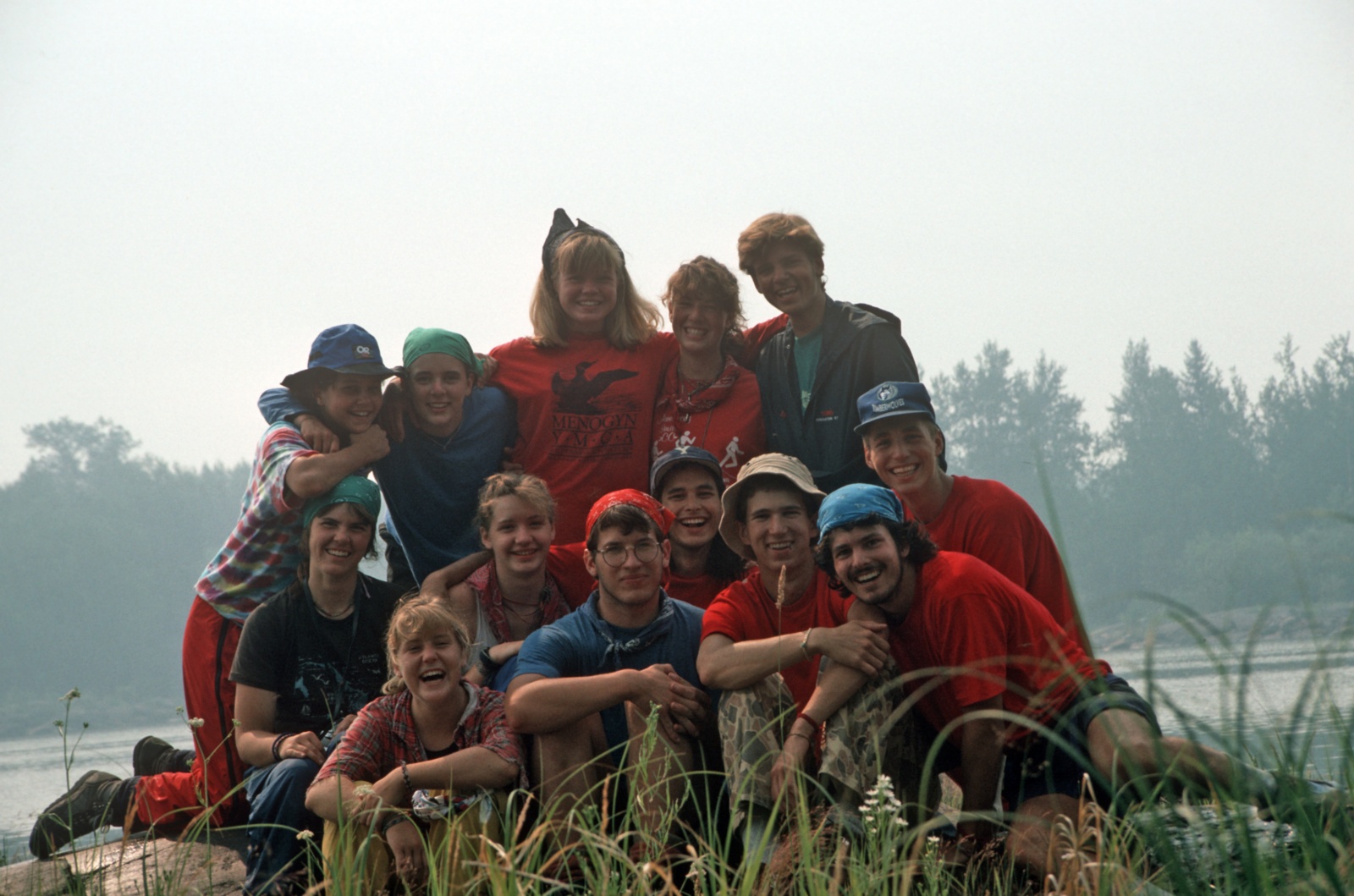 July 21, 1989 Day 2 (Nelson River) “I walked to Sugar Falls this morning in hopes of spotting the white pelicans again. The sun was high, though it was not yet 8am and it was shrouded in a smoky haze. Watching the water rush over the falls, I started to feel dizzy, like vertigo. It was rushing so fast and spinning in so many directions, falling back on itself, spraying up in the air, spinning into a whirlpool. And it never stops.” (personal journal)

“Here I am, Morgan, duffing down the Nelson River. It took us a while to get out of camp this morning for many exciting reasons. Nissa caught a northern. We fried it up and ate it for breakfast along with the 7 crayfish that Nelle and Carrie caught. We had coffee cake also, but in all the excitement, it took some time to bake. Then, when we were taking down the tents, we were attacked by black flies. They just swarmed around you making everything really difficult. Note for the day: Never go to the bathroom once it gets dark. My butt has yet to recover!!” (group journal)

We did our first whitewater of the trip today. Some was good, some was tough. There were clean runs, and some rough, tear-filled runs. We took our time. I ran through various rapids with different girls in the bow to help them conquer any lingering fear and feel more comfortable.

July 22, 1989 Day 3 (Nelson River to Cross Lake Reservation) We started the day by “portaging around the rapids we camped above, then CRUISED with a strong tailwind and current in our favor as we left the Nelson River and started across Pipestone Bay.” (group) The wind was very strong in Pipestone Bay, so we had to hug the shore and wind ferry from point to point. As we approached a road that runs to the town of Cross Lake (first and last town on our trip), we discovered there was not a bridge to paddle under. So we got out to portage over the road.

As we climbed the embankment to cross over the isolated dirt road, an SUV pulled to a stop. “What are you doing here?”, cried a voice, “Don’t you know Cross Lake has been evacuated due to forest fires?”

Well, obviously we didn’t know and probably had some dumbfounded looks on our faces. Given this news, we decided we should paddle all the way to town that night to be on the safe side.

“It was strange paddling into an evacuated town. We finally spotted someone and asked where we should go. We were so exhausted and we just wanted to camp. He directed us to the Fire Hall which required paddling further down the lake. We headed out, but soon a van started honking at us, so we pulled over again. He told us to load our packs into his van and he would deliver them to the Fire Hall. We did, then started paddling again when someone with a bullhorn called us over to shore again. Ugh! We just wanted to get to the Fire Hall. It turned out to be an RCMP and we explained what we were trying to do. He said he would meet us there.” (trip journal)

“When we got to the landing, there must have been 25-30 people people standing there staring at us. We took our canoes out and then we were whisked away in trucks to the Fire Hall. Everyone seemed upset that we were here. But now the official folks have mostly ignored us.” (trip journal)

I called to leave a message for camp. In 1989, there were no phone lines to the main camp. They only went as far as the end of the road, but not across the lake to the camp. So protocol was to leave a message and 2 or more times a day someone would listen to messages and bring the info back to camp. 1st message: “It is 9:30 pm on Sat. the 22nd. This is Kris. The Femmes are at Cross Lake Indian Reservation. We have evacuated ourselves because of forest fires. Everyone is fine. We don’t know what will happen yet, but it is most likely we will not be able to complete our route plan. We can be reached at ###-###-#### tonight or tomorrow morning.” (trip journal)

There are 7-8 forest fires actively burning in the immediate area. The people here (firefighters and support crews) have gotten very little sleep. It seems unlikely we will be able to continue on our route. We have been told everything from… “you need to be evacuated to Thompson” to “would you like to stay and volunteer?” I notified the RCMP about our Hommes group heading for Oxford House on the Hayes River. They are keeping an eye out for them, but said they are in no immediate danger.

We asked to volunteer and were quickly put to work helping cook in the restaurant that was prepping food for the fire fighters. The restaurant owners taught the girls some Cree words since that was their main language. We also helped deliver the food out in the areas fire crews were working. The restaurant kept the girls busy and fed them as much ice cream as they could eat. We helped wash an RCMP truck and cleaned hotel rooms where the firefighters were staying. We met the only female RCMP in town and she invited us to stay at her house. I think she was eager for other women to talk with, since after the evacuation the town now has 200 men and 27 women. We are 7 of the 27 women.

Still stuck in Cross Lake, but there is plenty for us to do. The roads are all closed so even if we could get to Thompson where our van is stored, we wouldn’t be able to leave there to drive to Ontario. Everything is tinder dry and new fires keep popping up. We found out this is the first time Cross Lake has EVER been evacuated. 2nd message to camp: “This is Kris at 11 am Monday. Everyone is still fine. We have discovered that these fires are big news in MN, so the girls and I would like if R or S would contact our families to tell them we are fine. We may be going to Thompson late today or tomorrow. I would like to talk to R, S, or W today at 3 pm. I will call.” (trip journal)

We finally made it to Thompson today. Just after noon, we were told to pack up. Two trucks came at 1:30 pm and we loaded them. But then the siren went off and both drivers rushed away. At 3:30 pm, we found that the roads were closed again. At 4:30, we were told we were not going. Then at 6pm, they said we were going, hopped in, and we were off. We were meeting someone in Wabowden to take us the rest of the way to Thompson. He said he had to drive around the road closure barriers when no one was looking. Tomorrow we start searching for a new route.

“Women startle firecrews” read the headline in the Winnipeg Free Press. “Not a bad article about us. They only made a few mistakes. Since other media outlets picked up on the article, we have a lot of press calling. I did one radio interview and one phone interview with branches of the CBC. Then I said no to the rest.” (trip journal)

Meanwhile, a Minneapolis TV station went to interview my parents. When my mom wouldn’t cry and gnash her teeth with worry, they packed up their cameras and left. When they asked her, “Aren’t you worried about your daughter?” all she would give them was a cool, calm response “No, I’m not worried at all. My daughter is extremely sensible and capable.” I guess that just wasn’t news.

The real news was the fires themselves: “Fires to date = 894 Fires still burning = 224 Total hectares burned = 829,218 People evacuated = 21,000 Some of the communities evacuated include: Cross Lake (our evac point), Oxford House (the boys’ group evac point), Norway House (where we started), God’s River, Shamattawa, Leaf Rapids, all towns along the railroad between Thompson and Gillam (including Gillam), Nelson House, Grand Rapids, Snow Lake.” (trip journal) The official trip journal at this point is filled with lists of to-dos, questions I need answered, phone numbers for contacts to call. I am going flat out trying to arrange a new route.The girls are helping out with the evacuees, entertaining little children, making friends and connections. They found someone who offered to teach them water skiing. Someone else lent them bicycles.

Followed up on transportation leads: trains, planes, and automobiles. Tracked down rumors about burned out bridges. Jotted notes about Seal River route and plane costs. Pages and pages of notes.

We still don’t know about the boys’ (Hommes) group since they aren’t expected to paddle into Oxford House until July 29. We expect to be gone by then, so I left a message for them stating: “The girls group had to evacuate from Cross Lake due to fires. Everyone is fine. We have rerouted to the Seal River. We will get a tow on August 21st and try to make the August 23rd train. Otherwise we will be on the August 25th train. Good luck. Hope to see you in Thompson.” (trip journal)

We quickly put together a tentative route for the Seal River. Hoping to fly out tomorrow. Flights arranged. Tow on Hudson Bay arranged. Full speed ahead!