Flambeau Flowage Wisconsin May 2020
by bridge4life

Trip Type: Paddling Canoe
Entry Date: 05/14/2020
Entry Point: Other
Exit Point: Other
Number of Days: 3
Group Size: 2
Trip Introduction:
Due to the COVID-19, our original plans to launch out of East Bearskin Lake in the BWCA had to be placed on hold for another day. So what kind of camping could we do with parks closed all around the state? We decided to stay in state and explore the Turtle-Flambeau Flowage in Northern Wisconsin.
Discuss Trip: View Discussion Thread (7 messages)
Report
Before this pandemic shattered everyone's plans for the year, I had a permit for East Bearskin Lake Entry Point in mid May 2020. I had been looking forward all winter to dip my canoe in the lakes again but that all changed due to the stay-at-home orders and state-wide shut downs. No matter, I took the opportunity to seek out where I could go camping locally without making unnecessary contact with anyone in the process. Taking the advice given by top officials, I was able to narrow down my decision to The Turtle-Flambeau Flowage.

Taking this trip, I wanted to be sure I respected everyone's views and by showing the proper concern for their safety as well. I heard from Minnesota's Governor Walz that individuals going fishing during opener should not travel further than what they can accomplish on one tank of gas. I thought that was a good rule of thumb to go by and factored that into my ultimate decision to make sure I did not travel too far from home. I also greatly appreciated the fact that Wisconsin kept remote camping open in 10 parks across the state. By camping at a remote site and traveling on one tank of gas, I felt it was safe enough for us to accomplish this trip.

The Turtle-Flambeau Flowage has over 60 campsites, all accessible by the water and there are no reservations for the remote sites; you just pull up and unpack! With that in mind, there was a feeling of uneasiness knowing if we were going to get a campsite or not. After reading other's experiences on the TFF, there had been a great agreement that finding a campsite was no problem at all. I kept that in mind while planning and began to choose five campsites where I would like to camp at if sites became unavailable. I was sure to keep the sites all within a reasonable distance from Murray's Landing which was where we were planning on launching out of. After everything was planned and packed, the fiance, dog (Winston), and I loaded up and hit the road early on a Thursday.

After the easy drive to Murray's Landing, we found the launch to be chocked full of boat trailers and trucks, which was not what I had expected at all! From what I had read, others had claimed to be the only ones at the landing and that traffic on the water was very rare to see. I had to keep an open mind since everyone is itching to get outside during this pandemic and fishing opener was two weeks prior. No matter, we kept pressing on and began unloading gear.

Finally floating, our paddles had made the first cuts through the glassy waters. I had the gear and Winston with me while Sarah paddled herself in her kayak. Winston is usually a fantastic canoe dog until he sees mom in a different boat and a distance away. He became so concerned for mom and began whining and started shifting side to side. This was a good test of patience for me. The winds were not bad at all, the temperature was low 50's and the sky was gloomy with sunshine in the forecast. We pressed on to our planned campsite; R-32: Campers from Hell.

We passed the first two campsites from Murray's Landing (R-40 and R-39) and both sites were occupied. I kept my mind open that just HOPEFULLY our number one site choice would be unoccupied. As we kept paddling, R-38 and R-36 were also both taken! We passed several fishing boats and even had some pass by us. This part of the flowage is a "no-wake" area and the boaters were very respectful of that rule as well. Having all of the cargo and Winston, it for sure made me happy! We were approaching the narrows to R-32 campsite and could see fishing boats on both sides of the narrows. Just MAYBE this site could be open.

What a treat! R-32 was wide open for the taking! What a relief to be able to get a site and to get the whining, energetic dog out of the canoe. Sarah went exploring around the small island to check it out before unpacking. It sure was beautiful; tall jack pines, perfect tent pad, and a nice location in the protected narrows. A fishing boat had even set themselves up next to the island so we may even get lucky to have ourselves a good fishing spot just off the shore. The only downfall was how exposed the pit toilet was to any boaters traveling by. There was lattice attempting to cover it but it really was not enough, especially to how often those narrows were being fished. I had just finished unloading all of the gear when I heard a goose honk. The goose had come within a very close distance of us and began honking wildly. To our surprise, there was a goose nest on the island with eggs in it. The island campsite, and our number one choice, was in fact taken...

Trying not to disturb to goose any more than we already did, we loaded the boats again and turned our tails back down the narrows. After being jokingly heckled by the fishermen, we continued in search of a new site. the other sites I had picked (R-30, R-31, and R-33) were tucked back in the trees. Being picky, we were looking for a good island site before settling for a site on the mainland. We headed straight south for site R-35 where Sarah paddled around one side of the island and I the other side. We were making sure there were no nests OF ANY KIND. Thankfully, and to our amazement, R-35 was still open! We could finally rest easy!

R-35 had nice tall jack pines around the area. The site was steep from the tent pad and the fire pit was also situated on a hill but we were going to make this site work. The island was full of hemlock trees and very little underbrush which made the whole island easy to explore. In a way, I felt like I was in the BWCA but without the portaging. From a map, it looks as if this flowage gets lots of traffic but it did uphold to the testimonies from those that I had read before going and there was not much noticeable traffic at all. 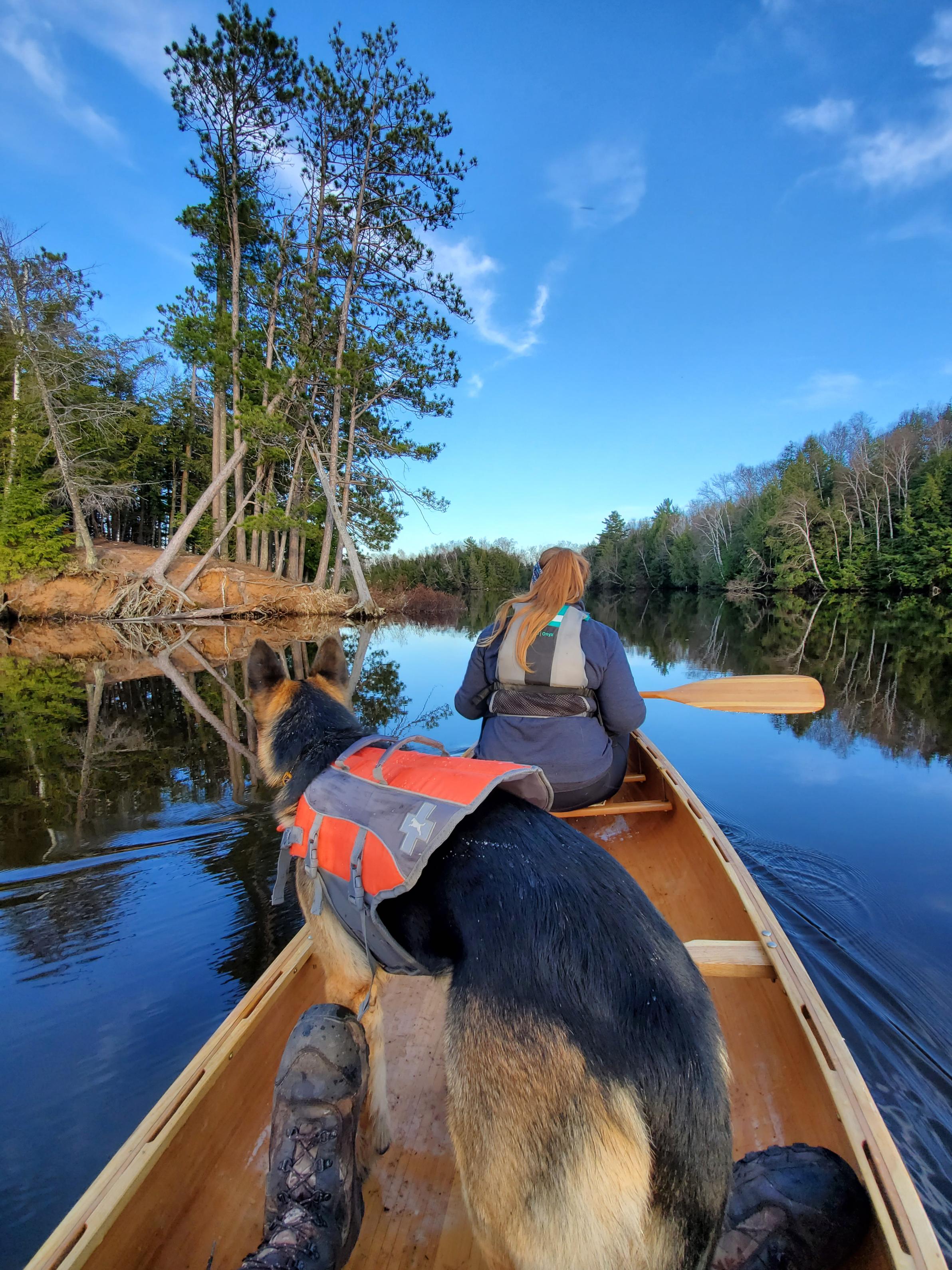 The first night was a perfect sunset with clouds, glassy waters, and loons calling from all around. In fact, for most of the night, I recall the loons calling as late as the owls. The gnats were starting to just come out and the frogs were beginning to sound as well. A sure sign of summer after a long, snowy winter. The warmer night made sleeping extremely comfortable. 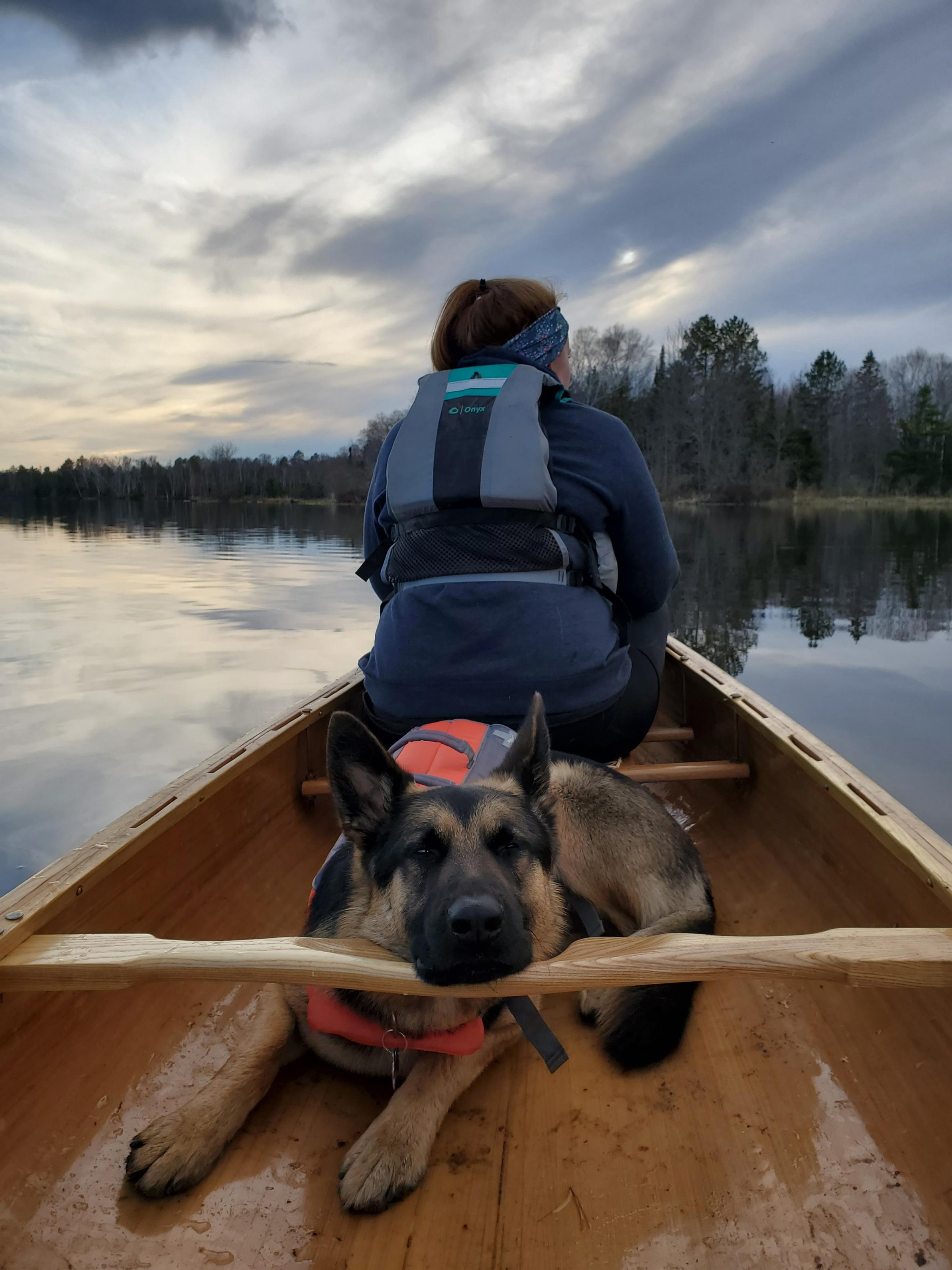 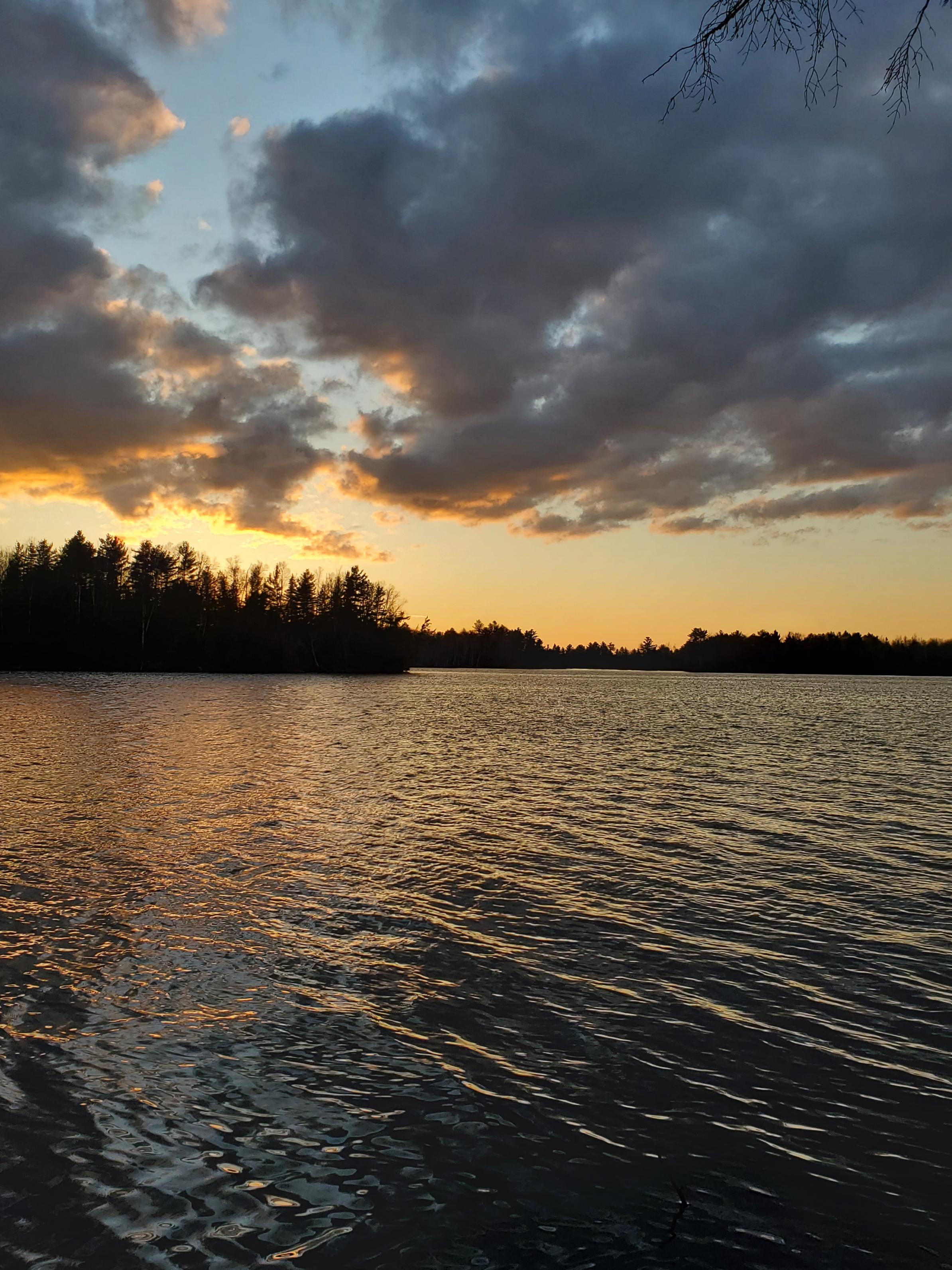 The next morning, the winds became strong from the north. It was very difficult to really do any kind of paddling around so we spent the day waiting it out. We fished the south side of the island and even jetted across to the mainland to pick up some firewood. The problem with an island site is trying to find any kind of firewood. There were plenty of small fire starters but nothing big enough for a real fire. We did some exploring around our little area and even set up the hammocks for much deserved naps. We really wanted to continue venturing around but the winds just did not settle down. Just before supper, the sun came out and the winds calmed down, giving us a perfect evening. We hopped in the canoe and paddled straight north to do some evening fishing.

Slip bobbers and minnows. That is what is recommended by everyone who was fishing the flowage. We had used night crawlers since they were easier to pack but the bobber fishing kept tackle light. There is something very relaxing about watching a bobber. Of course, I cannot sit still long enough so I prefer casting a lure to bobber fishing. I caught a decent little perch and Sarah caught two very small perch. Needless to say, fishing had slowed down quite a bit since opener. We pulled back in to the campsite to enjoy the rest of the evening and the sunset. 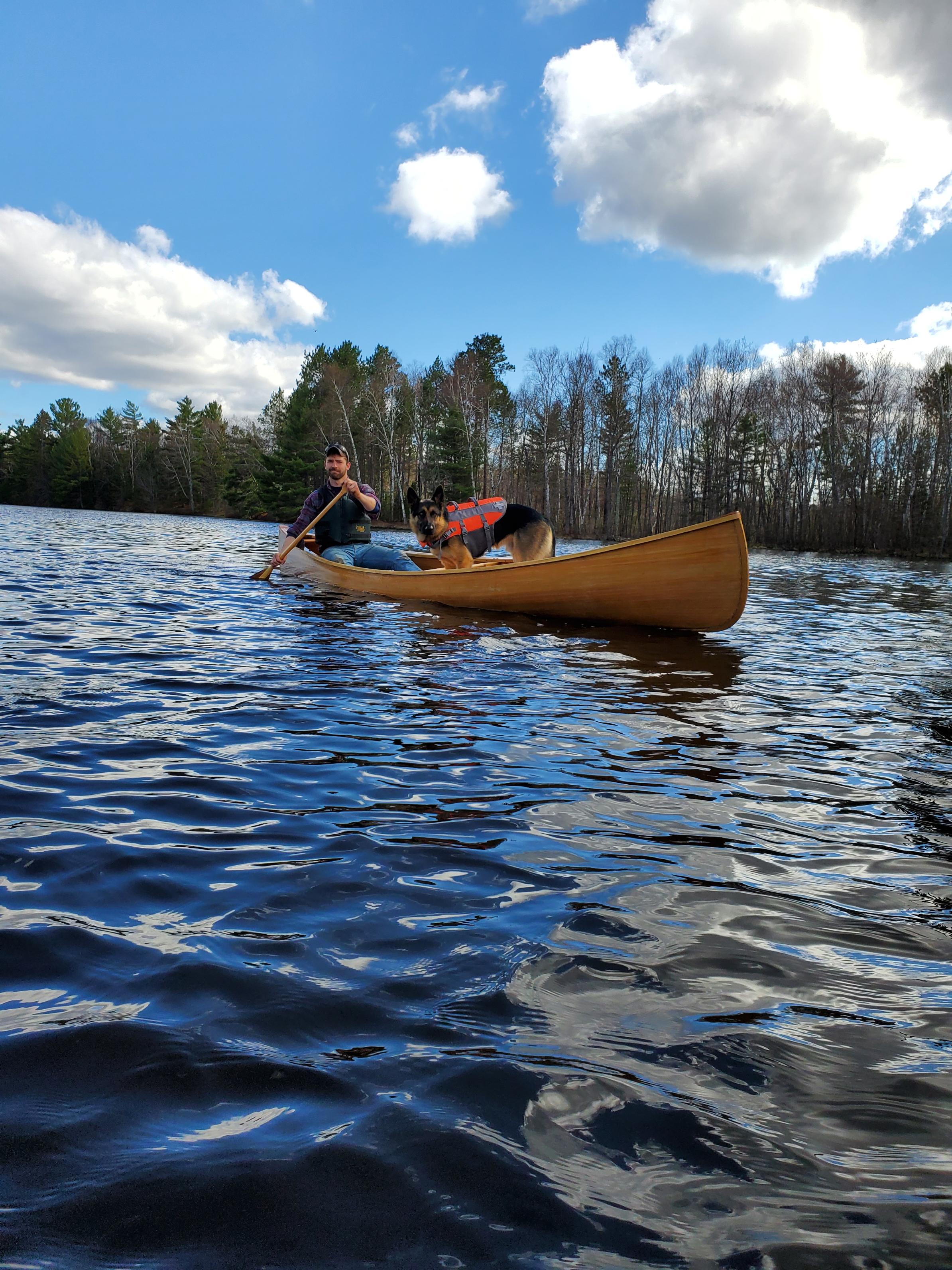 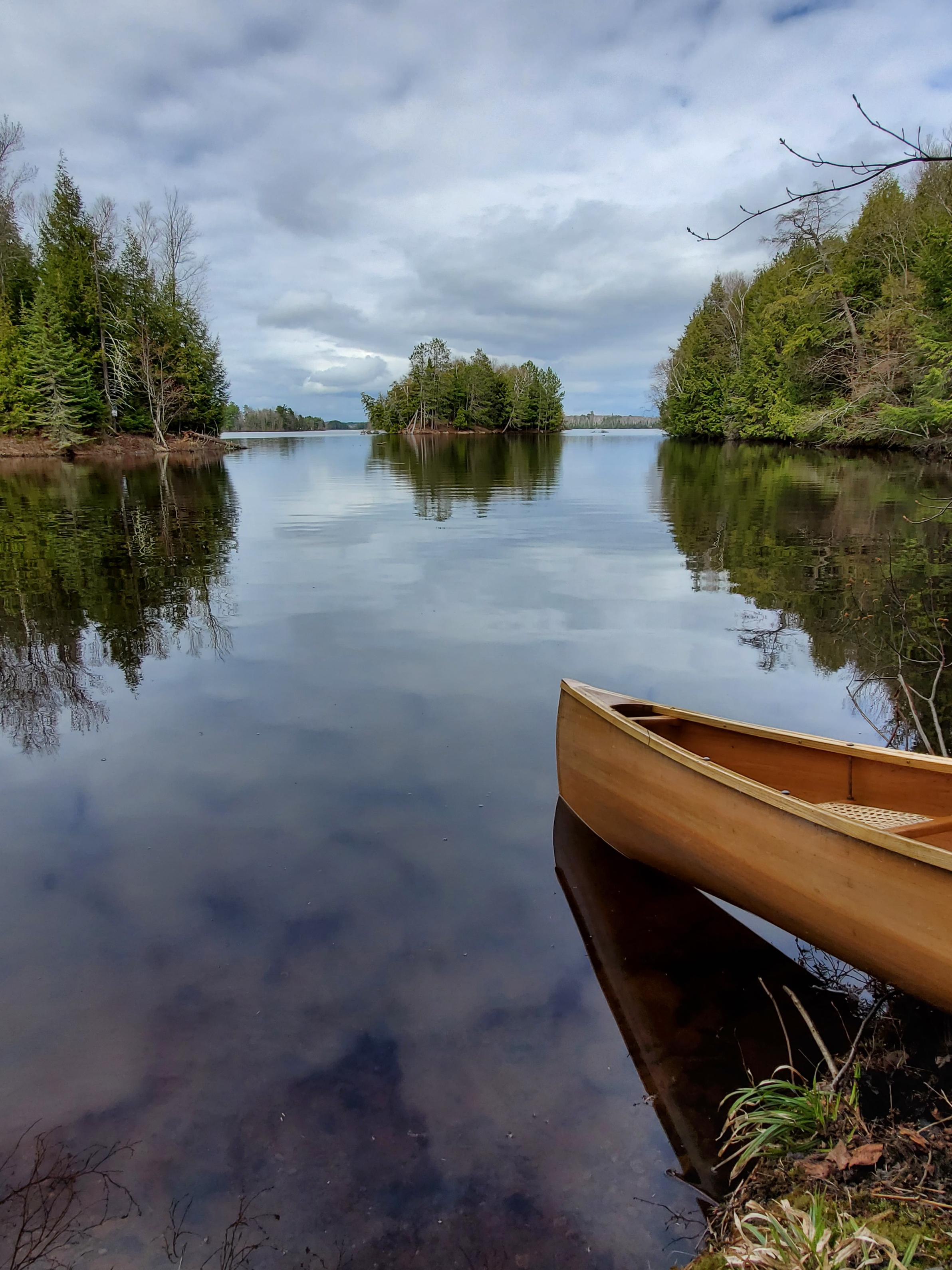 The next day we packed up and headed out, taking advantage of the light southeast breeze and the clear sunny skies. All in all, it was a great way to start off summer and to have done this during the pandemic was a real treat. I know lots of us look to the BWCA for a quiet way to isolate and unplug ourselves from society but sometimes there are great opportunities just in our backyards or even a couple of hours away. Granted you may not see a moose or any other kind of northern Minnesotan wildlife but you might just appreciate what you have close to home as well.