First trip to the western area BWCA
by paddelingruth

Trip Type: Paddling Canoe
Entry Date: 08/19/2019
Entry & Exit Point: Little Indian Sioux River (north) (EP 14)
Number of Days: 5
Group Size: 2
Trip Introduction:
We left Lincoln early on Friday and headed to Fargo to make Sauerkraut, and stayed with Dan’s brother and family; it is always great to see them. Headed to Duluth on Saturday and camped at Indian Point Campground, it was just for a quick night of sleep and then headed to the North Shore area to drive on Lake Superior, we both love this area and we had to see if the Blueberries were in our usual place. Yes, the blueberries were there and we would have them for our pancakes in the BWCA. We then headed to Ely to find Voyager North for sleeping. We walked around the town and had a great supper and wonderful Custard at Red Cabin. YUMMY! Ely has a lot of neat shops. We stayed at Ely at Voyager North, Bunkhouse on Sunday evening. This unit had 3 separate rooms, each had 4 bunk beds & the common area was shared with 2 showers & one toilet. There was a microwave toaster, coffee maker, various teas & sugar etc. Well worth the stay. I am always amazed at dad’s who take their daughters into the BWCA, by themselves. There were 2 dads staying with their daughters. The kids were really excited.
Discuss Trip: View Discussion Thread (5 messages)
Day 1 of 5
Monday, August 19, 2019 We decided to get up around 6:00 am to head out to Brittons Café, very good food & reasonable. There was only 3 other people in the café when we arrived. It didn’t take long for the place to start getting busy. There was a group of 6 people who came in that I thought that I recognized that had been at Trail Center last year, when we stopped for breakfast. I asked them if they had been at East Bear Skin last year. They said yes, they were curious, I explained we were there also. The one asked me if we had the black and white springer and I stated yes, talked to them for a little while. They have an adorable little granddaughter she is about 3 years old , and had a huge pancake the size of a dinner plate and was embarrassed how big it was. We laughed and exchanged emails. They had never been in this area either always did the East area of BWCA. We were headed to BWCA Entry Point 14: Little Indian Sioux River, Upper Pauness, Lower Pauness and Loon Lake We have our own Wenonah Boundary Waters, 17ft canoe that we bought used from Canadian Waters Outfitter on our way to the last canoe trip. He had showed Dan on a map about this canoe trip, so we decided to try it out. That is why we were in West area this time. We were on our way by 7:07 am, the road we were looking for was hwy or road #116 called the Echo Trail, it is listed as 88 on the hwy sign. After half hour of driving we ended up back at Hwy 1 to Ely. Some where we missed a sign. But that is okay we stopped for gas and we both used the facilities and off we went again. This time Dan took out his packed GPS and sure enough we found a very faded 116 sign and white and green street sign that said Echo Trail, so we arrived around 9 ish. By the time we got unloaded and walked to the put in we were canoeing by 10:10. There were 4 other groups putting in about the same time. Very busy portage. On the next portage there was 3 other groups coming out. It was cloudy and 74 degrees. The rice grass was pretty thick at times on the Little Indian Sioux river and the river was pretty low. It was two hours of paddling to get in to the Upper Pauness. We saw a group looking for camping spot so we moved on. The big site by the portage to Lower Pauness was full. The next site was open so we moved in. We were both beat seemed like we had to hurry the whole morning with so many coming and going. Windy We set up camp and took a nap, then headed out fishing. Dan caught a small bass and walleye. We saw otters, beaver, and a deer, eagle and 2 loons came to welcome us. We must be back in the BWCA, when the loons come and welcome you. We had our usually steak supper and mashed potatoes for supper over a nice fire. We then headed to bed. 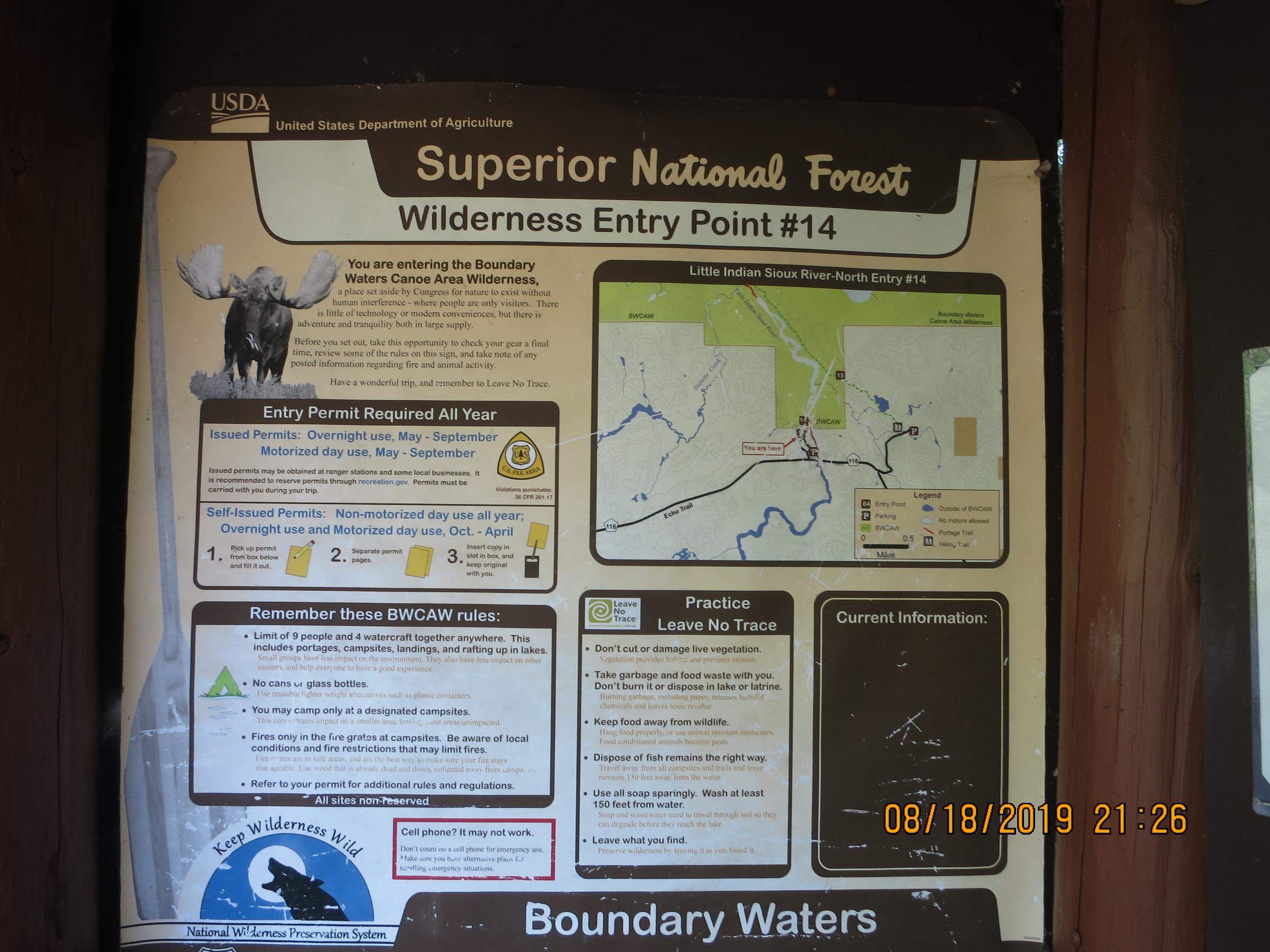 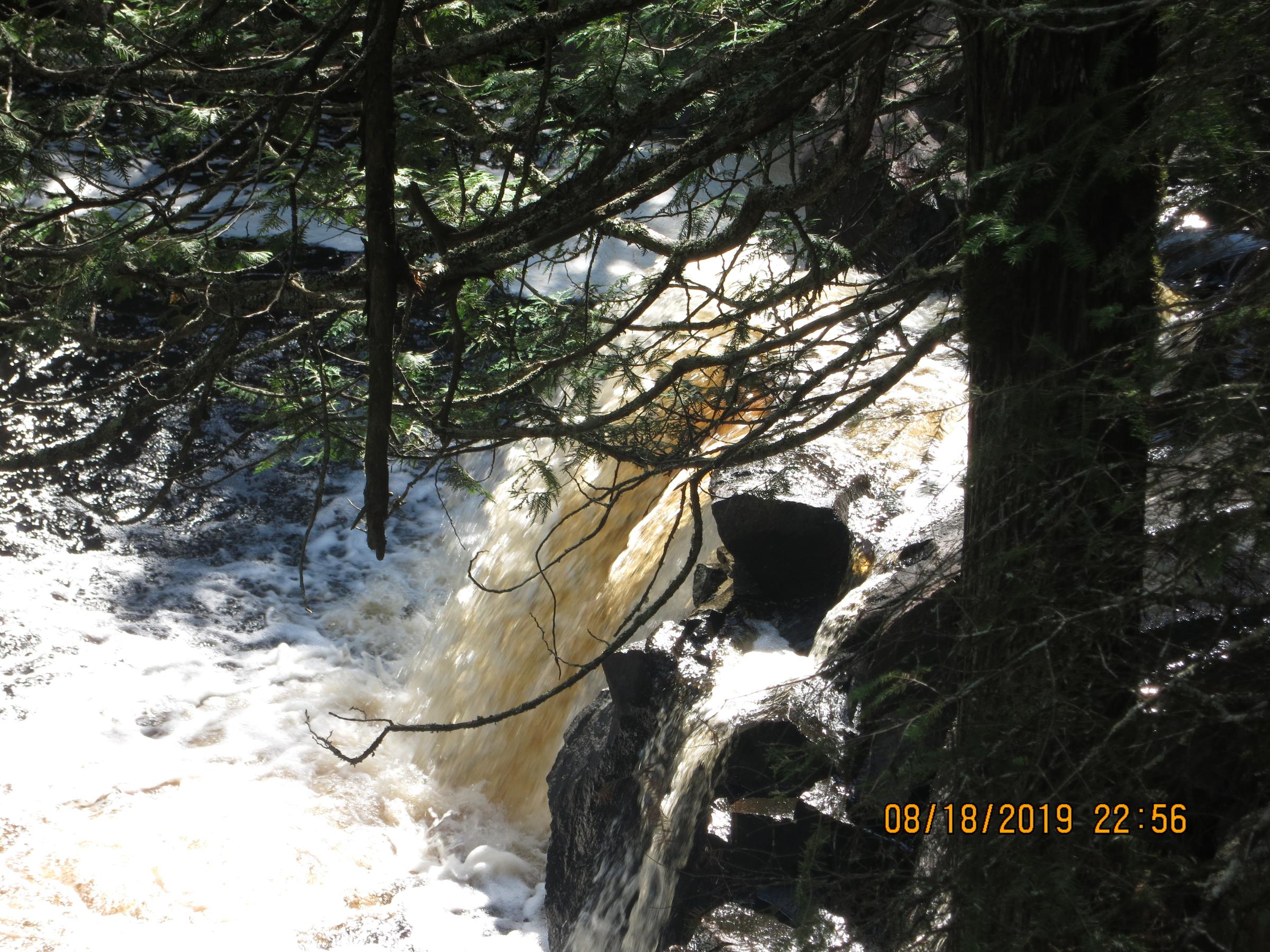 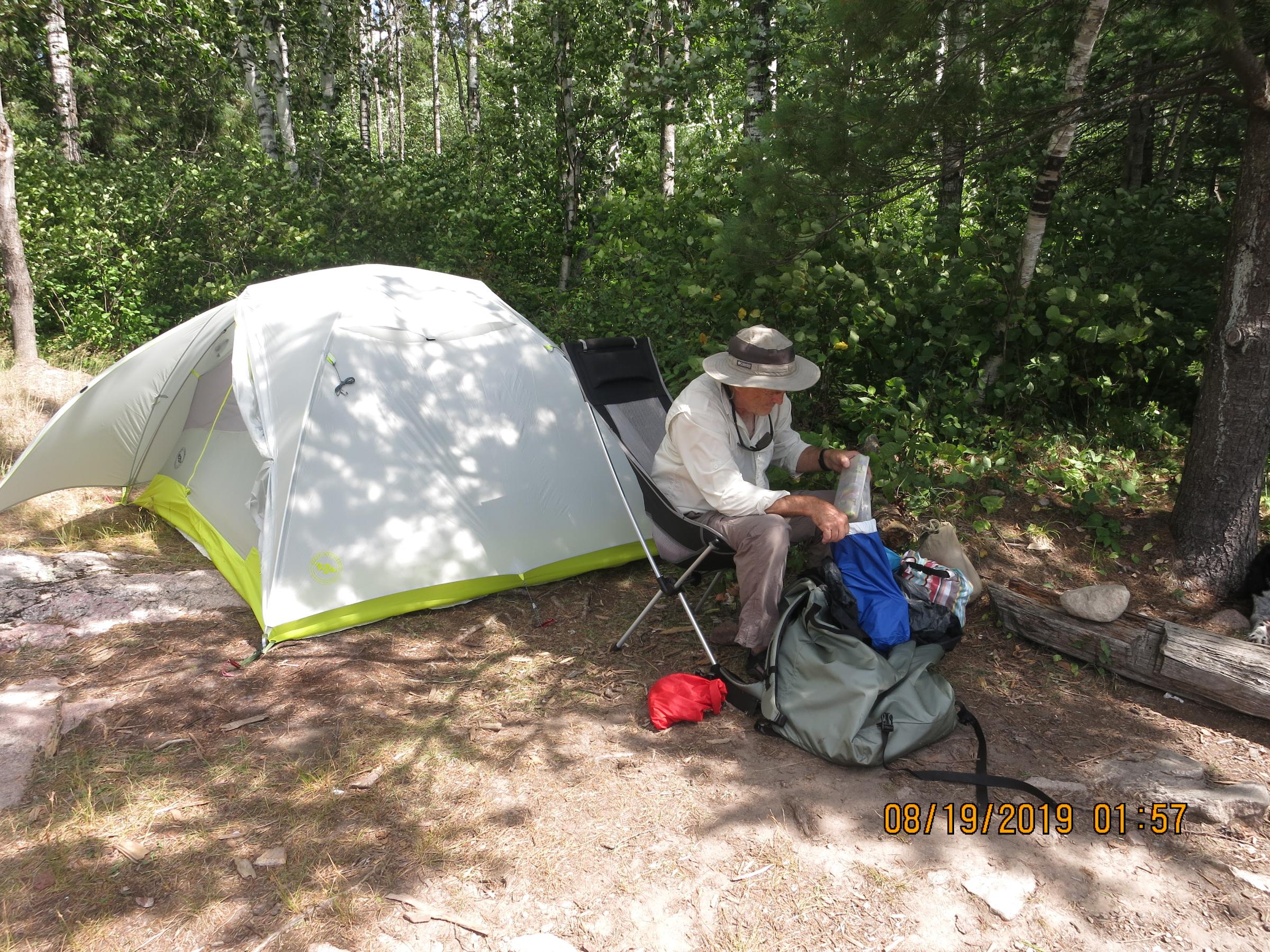 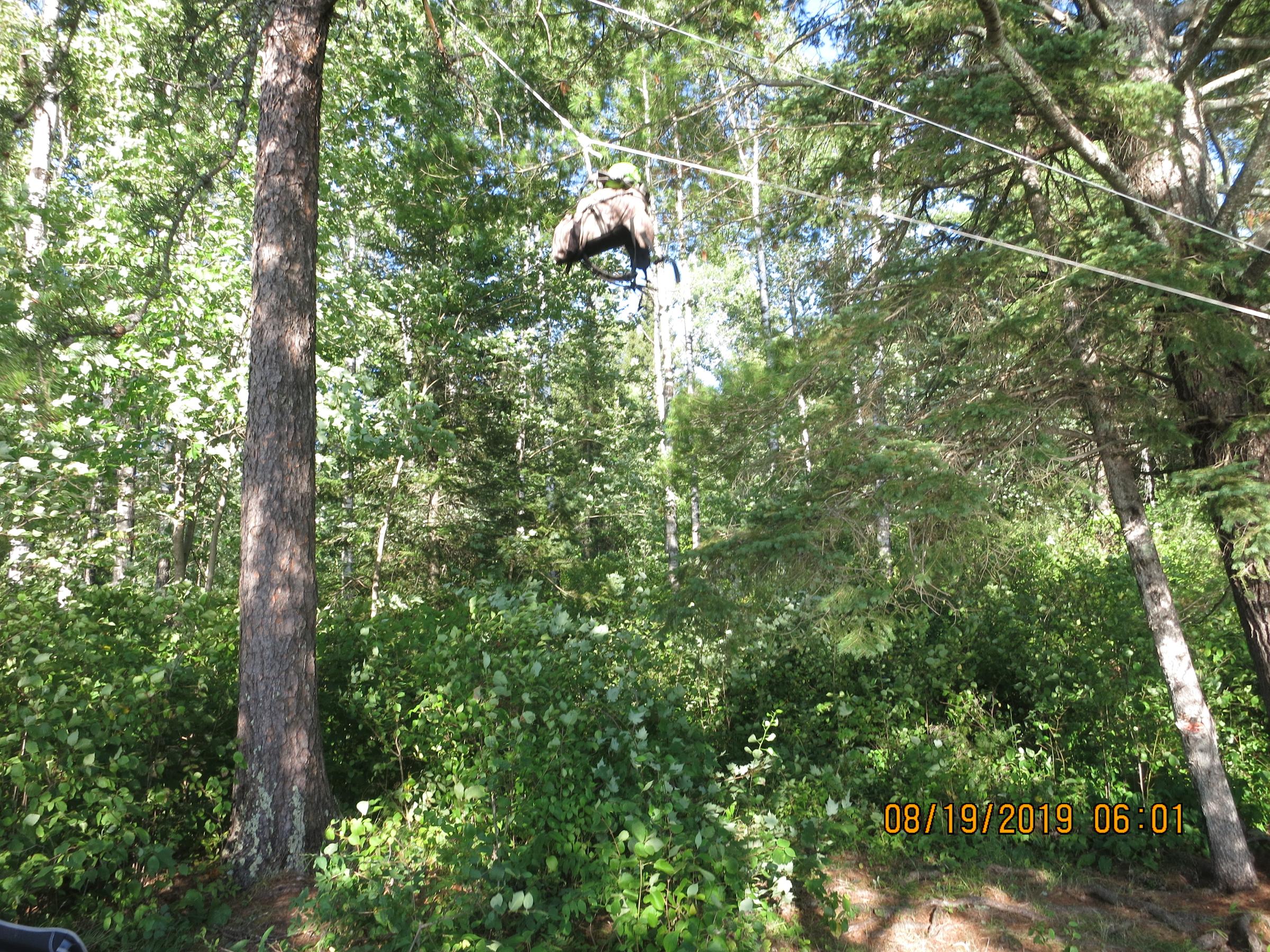 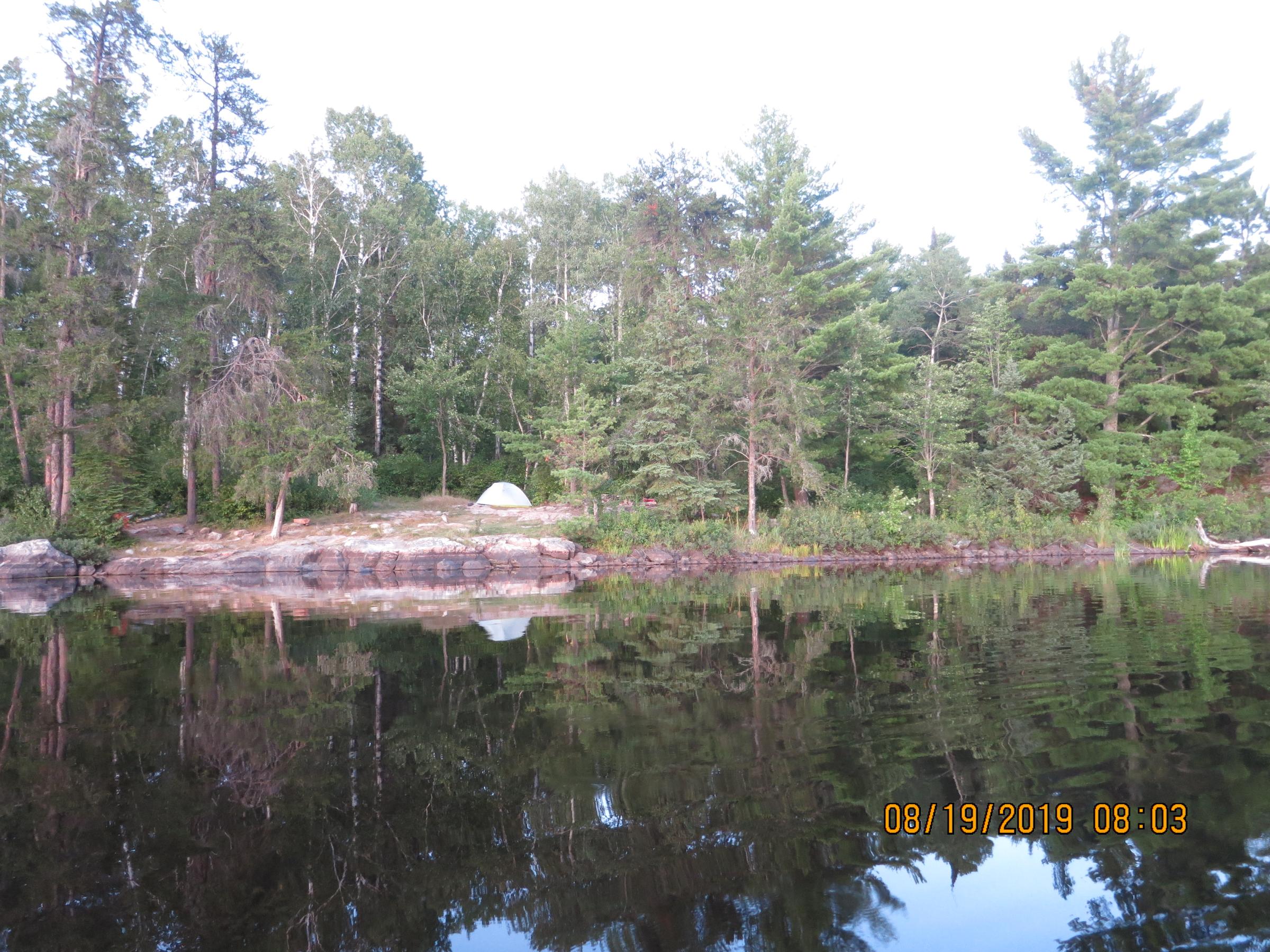 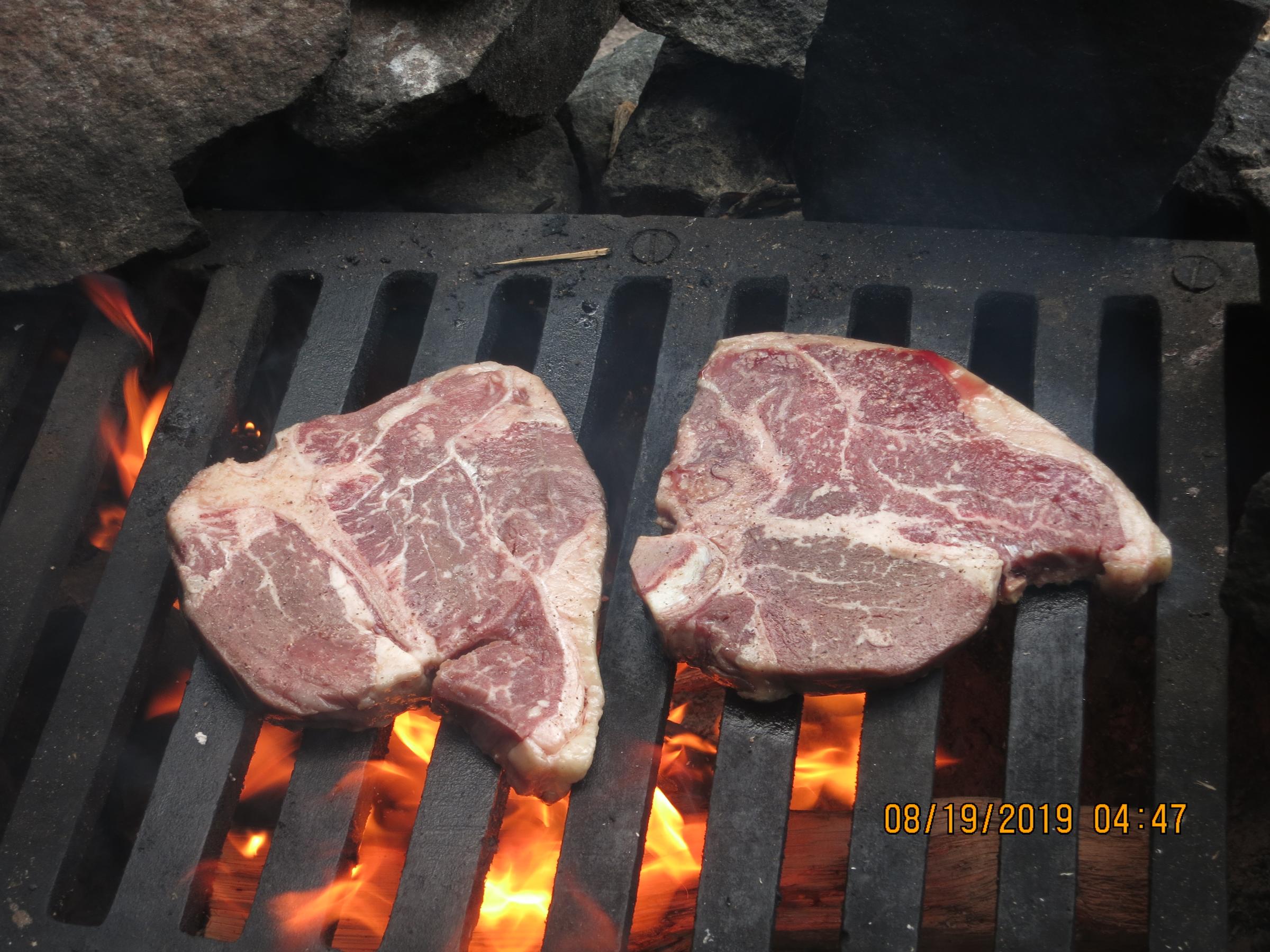 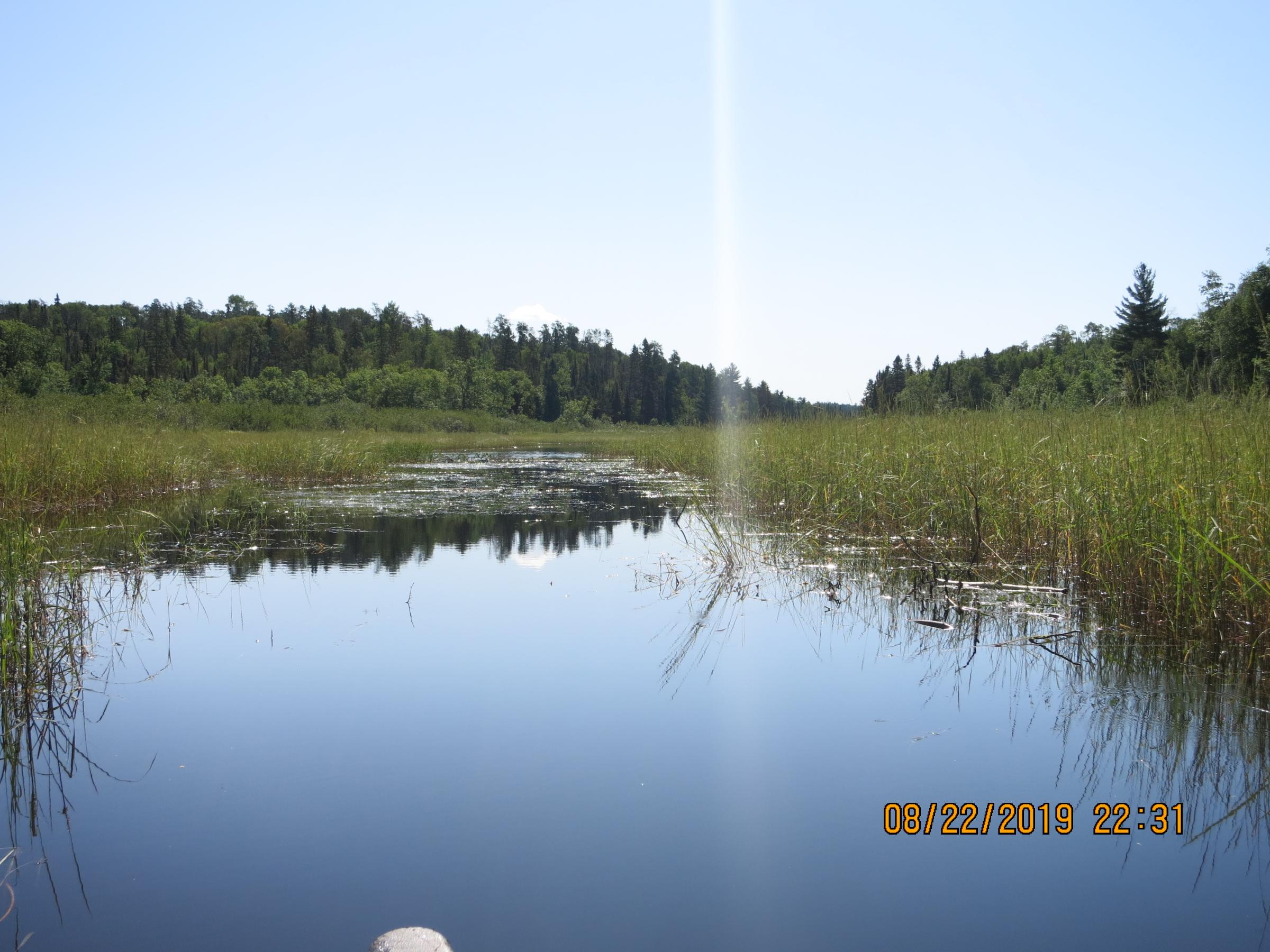