S. Hegman to Mudro- Pictographs and Giant Bass
by wxce1260

Trip Type: Paddling Canoe
Entry Date: 07/09/2020
Entry Point: South Hegman Lake (EP 77)
Exit Point: Mudro Lake (EP 23)
Number of Days: 4
Group Size: 4
Trip Introduction:
Last minute trip with a friend and our two college aged boys. The only permits left were lakes with boats or long portages. We opted for the portages to get us away. It was going to be a short trip. (second trip of 4 this summer). Had a choice of the Trease to Angleworm portage (420 plus the mud bog or Angleworm portage). Chose the shorter and more difficult one just to prove we could!
Discuss Trip: View Discussion Thread (6 messages)
Day 1 of 4
Thursday, July 09, 2020 Left sconnie in two vehicles all packed up the night before. I've got my Northwind 17, Paul and Tommy will be renting a SR 17 from the Methodist Camp in Ely. Otherwise we outfit ourselves. We packed light knowing that we had a 428 rod portage and a 272 ahead of us today. We had done quite a bit of reading to know that the 428 Trease Lake to Angleworm portage could be a bugger. The boys were whining, but the 50 year old guys were rarin' to tackle it. It was a short trip so we figured we would be able to single portage, with 2 heavier packs along with 2 lighter packs for the guys carrying the canoes. We have velcro straps for the fishing rods and paddles so they go with the boats on the portages.
Left at 5am and immediately hit a big old windy thunderstorm which actually caused us to drive about 35 miles an hour for the first hour of the trip. Finally were able to hit driving speed near Webster. Made it to Ely at almost 10am--later than we had planned. Paul and Tommy went to get their canoe. Ryan and I swung into Spirit of the Wilderness to get some leaches. Only larges and jumbos left, but that'll be fine. Picked up a couple dozen and off we went up the echo trail.
Hit the South Hegman EntryPoint and unloaded gear. We had the boys put stuff together while Paul and I brought one of the vehicles to the Mudro lot for when we exited. FINALLY hit the water about noon.I had never seen a pictograph before, Paul has seen them in other BWCA spots, so that was our first objective. Both Hegmans are beautiful lakes--but extremely busy with daytrippers. No biggie, it was nice to see so many people enjoying the wilderness.
Finally made it to the end of Trease Lake--and there it was--the portage. It didn't look so menacing. I wanted to see the true length, so I turned the gps on my fitbit and off we went. (1.8 miles to end --1 hour and 15 minutes).
All I have to say about the 100 or so yards of mudbog in the middle is this--those of you on bwca.com who said it was a challenge--did not exaggerate--it is.


Finally made it to Angleworm. With the wind at our back we really enjoyed the paddle towards home. Angleworm is a beautiful lake. So beautiful that I have since picked up a hiking permit to walk the trail on a three day backpack trip in August. Well we made it to the end of Angleworm and we were pretty tuckered out. We hadn't seen anyone on the trip since North Hegman so we hoped and planned that we would go to Home lake and setup camp for the night. Made it to Home Lake and to our dissapointment, the only site on the lake was occupied. So we looked at our map and saw what we thought was a site at the north end of the lake. We paddled back and forth for about 45 minutes trying to find the site at the north end--got out of the boat a couple times but could not find it. (It wasn't til after we returned we realized this was a hiking campsite about 20 rods off the lake--one that I will find when I head back to hike!)

Well, since there was no campsite--we had to take the 272 rod portage to Gull Lake. Fortunately, that is an easy portage. Fortunately there is 1 campsite left on the lake. The middle one on the north shore. Pretty site with a nice breezeway. The burning ban is on, so no need to find wood. We got camp setup while the boys went out fishing. Camp finally setup about 8pm and a dinner of pita pizza. The boys came back and said they had caught several bass and pike during their hour or so fishing. We were spent at the end of this day, but what fun and what a feeling of accomplishment. As my son says--every day in the Wilderness is a good day---there are just different types of fun on different days!

We slept well that night! 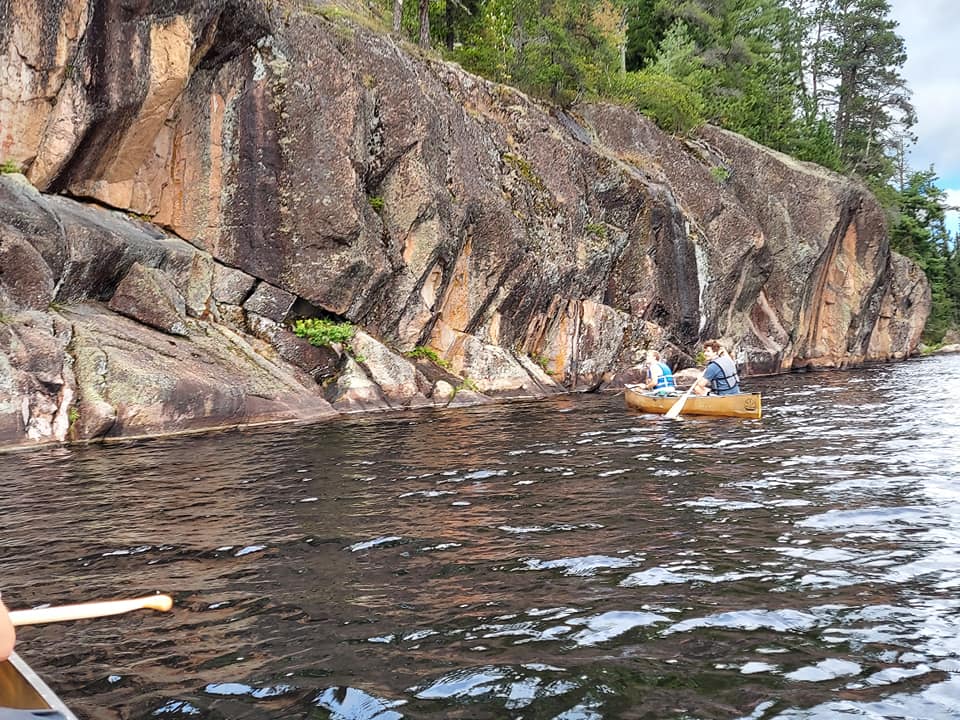 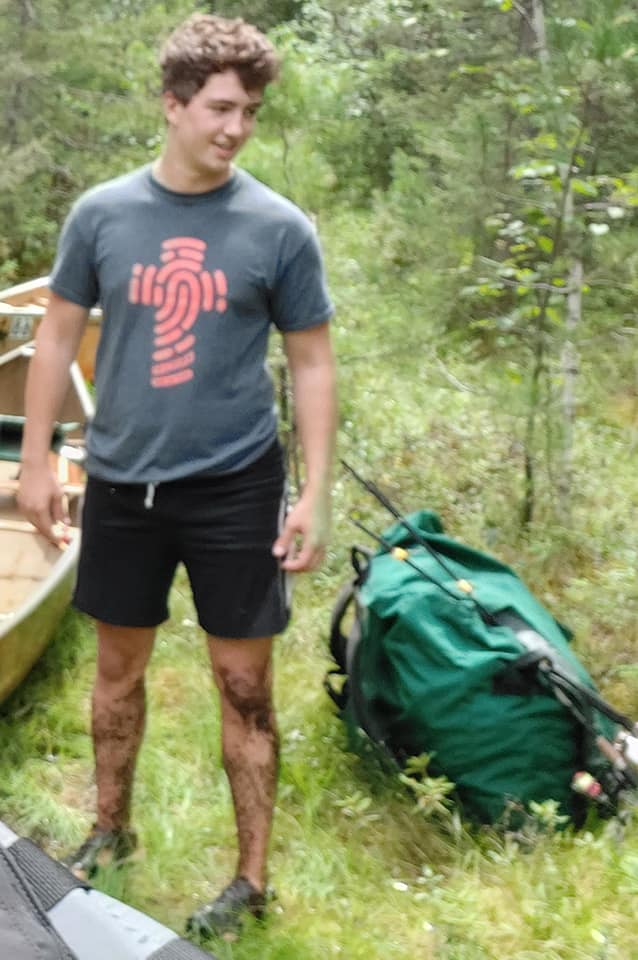 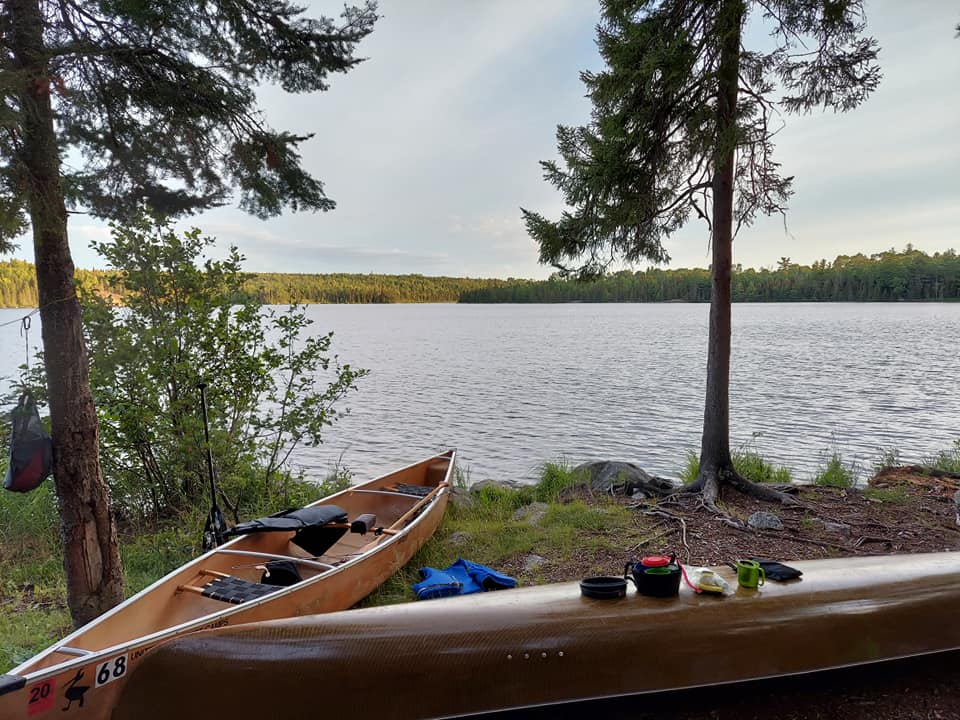 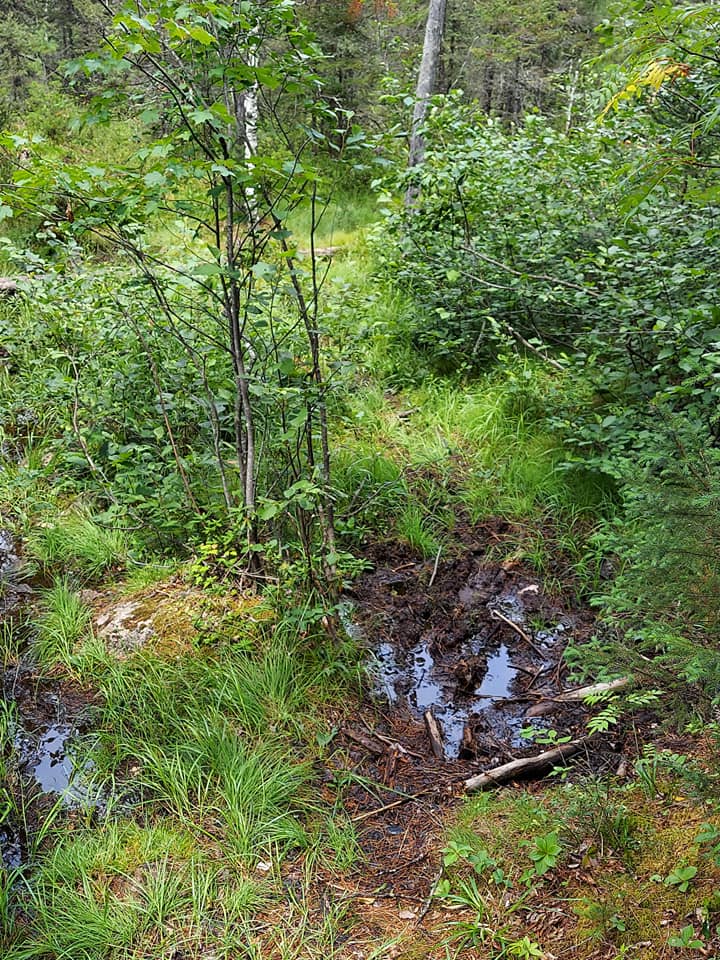