Tiger Bay, Agnes, and we suck at portages
by scotttimm

Trip Type: Paddling Canoe
Entry Date: 07/26/2020
Entry & Exit Point: Moose/Portage River (north) (EP 16)
Number of Days: 6
Group Size: 8
Trip Introduction:
6 days of glorious weather spent in the Tiger Bay area of LLC
Discuss Trip: View Discussion Thread (13 messages)
Report
Having taken a trip as a family to Polly in early June, and frozen our buttooski's off, the kids reflected they wanted to each bring friends along on our second trip. We invited a dad and his two kids, and another friend to come along. However, said dad came down with some Covid-like symptoms 6 days before our departure, so he had to bail, leaving my wife and I in charge of double our offspring! We felt we were up to the task. We were mostly correct.

After spending the night in Fenske's bunkhouse, we woke the 6(!) kids up at 4:30am to drive up to the Moose River North EP. For two of our three guests - this was their first portage - they handled it with grace. We were surprised at how quickly and efficiently we made it through the first few portages, the kids were doing great, all chipped in, and we had a pace set to get us to Agnes by noon. However, on the first portage after Nina Moose the younglings began to drag, and we fell apart a bit at the end of said portage while two groups waited for us patiently. One was a group of young men (scouts?) holding their canoes perfectly in line (I'm sure enjoying the show), and another group of strapping young men - one of whom looked at me and said, "FIRST TIME?". Thanks for that, no. Later that night my wife and I were cackling at what we should have said - and we used the response later, "we're GREAT at camping, we just SUCK at portages!". Mostly true.

We decided during our lunch break on Agnes to push on to Tiger Bay, and we were glad we did. On our way up we passed a group headed out, who said that #175 in Tiger Bay had opened up, and this had us push on faster. After the second portage that leads into Boulder Bay, we quickly loaded my son and his friend's canoe and sent them ahead while we finished - they flew up, secured the site, and this set us up for five days of glorious camping.

Time here blurred into a magical basecamp experience for all of us, I can't tell you what we did each day. The kids and we swam on that beautiful beach every day. Weather was in the upper 70's low 80's during the day at mid 50's at night, partly cloudy days at first and then full on sun day three on. A steady breeze kept the bugs at bay. We laid out on the rocks looking at the stars and the moon shimmering on the water. Many hands of Uno were played. Cocktails were consumed from our perch on the cliff, reflecting on how vibrant the colors are up there, and how much our kids have changed over the 11 years we have been bringing them up here. Our two bags of snacks slowly disappeared. The youngest girls loved exploring the island and finding coves of rocks and views of Warrior Hill. The teenagers found places to "vibe" and giggled a lot. We took one short trip to a nearby island and gathered enough blueberries for pancakes. We fished from shore, and took an afternoon fishing trip that provided enough fish to add to our dinner. Another day trip was taken to visit the pictos, where we met First Nation folks who talked a little about their history and their ancestors who were responsible for the paintings (we heard later that a couple other groups had a run in with "some guy in a boat" who drove them off from the pictos...was not our experience). We just soaked in the northwoods love every day. One guest said she didn't want to leave about 20 times, and remarked that she would hide in our packs if we didn't invite her next year. So, I guess from here on out for awhile we're bringing friends along for the ride.

The only downside to the trip was my youngest daughter's ear. We thought she had swimmers ear before we left, but the DR checked and said it was fine. On day 4, her pain became excruciating, and green gook leaked from the ear. I was glad to have the SpotX that I bought this year, and communicated with a doctor friend. Luckily, I had tucked away penicillin from a dentist visit, and was able to work with him to figure appropriate dosage and aspirin and ibuprofen. We left our beautiful basecamp to see how much of our trip we could shorten for our exit, and Agnes was as far as she could tolerate travel. After 48 hours on antibiotics she was feeling well enough for the push back to the EP. Our last evening, on Agnes, was spent eating all the best snacks we had left over, roasting marshmellows, and swimming. Side note - I found a large ring of shredded foodstuffs far back in the woods, and so we made sure to be careful with our food hanging.

Our final morning, 5am, I was startled on the thunderbox by the sounds of not-too-distant pots and pans clanging and shouting. We all knew what that meant. This got us all up and packing quickly, and we were on the water by 7:30. We took our time on the way out, joking with other groups, singing ("I think we're alone now...") and doing our best to be efficient on the portages. We hit DQ for ice cream and fries, then drove to our family's cabin in Grand Rapids where my folks had burgers with all the fixins ready for us, the kids happily sank back into their phones, and the next morning had us on our way back to northeast Iowa. Another great trip in the books. 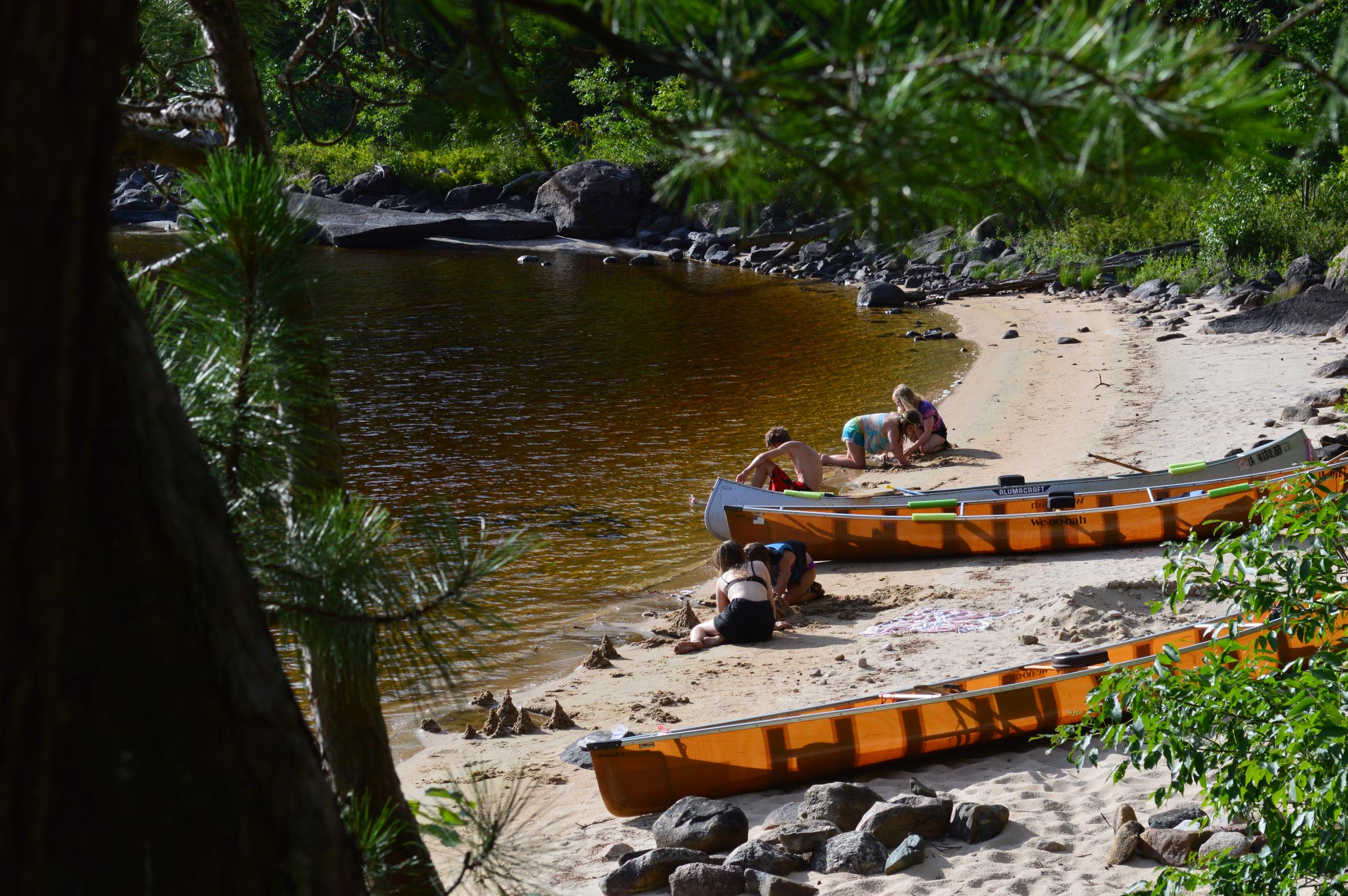 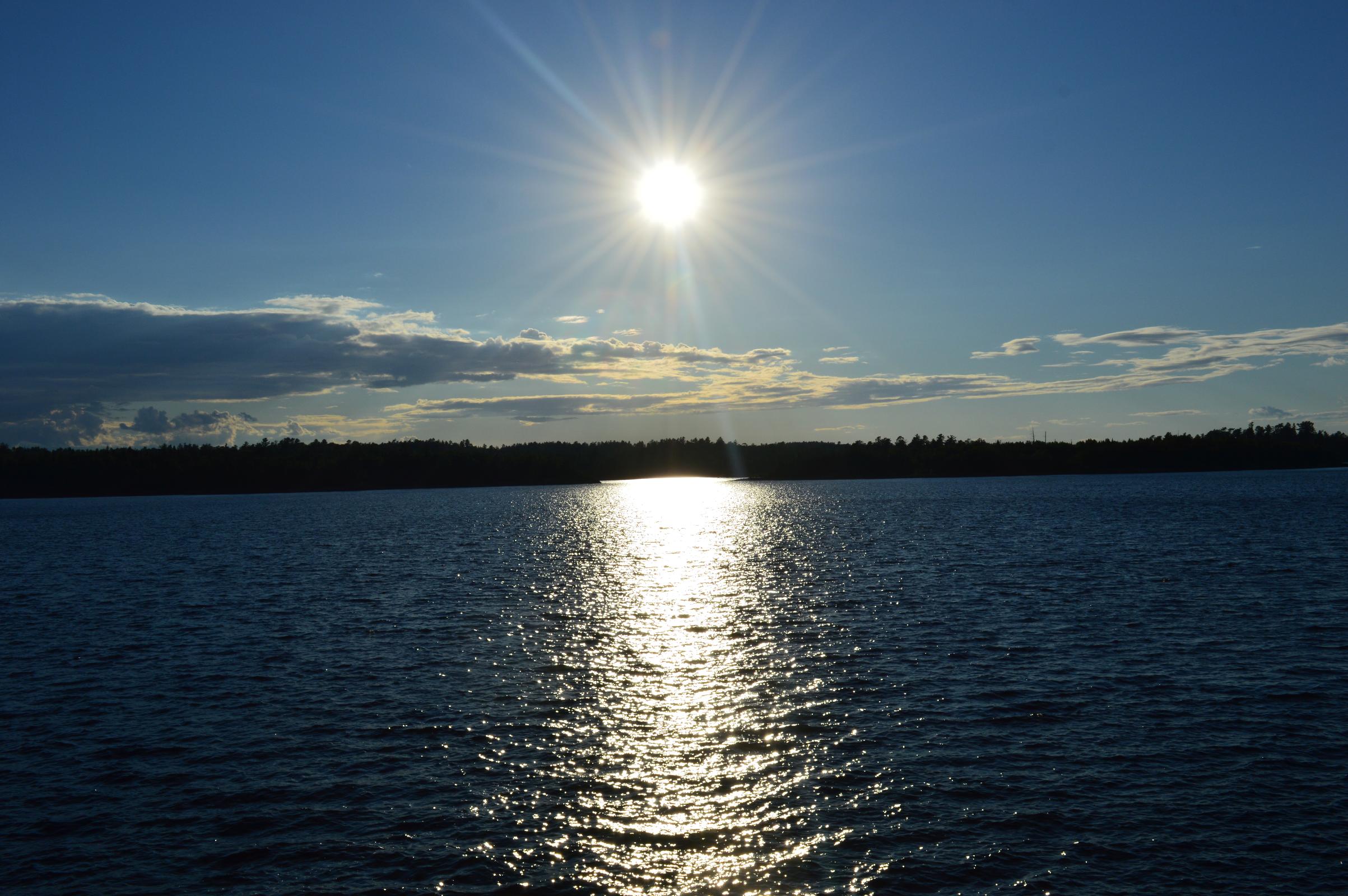 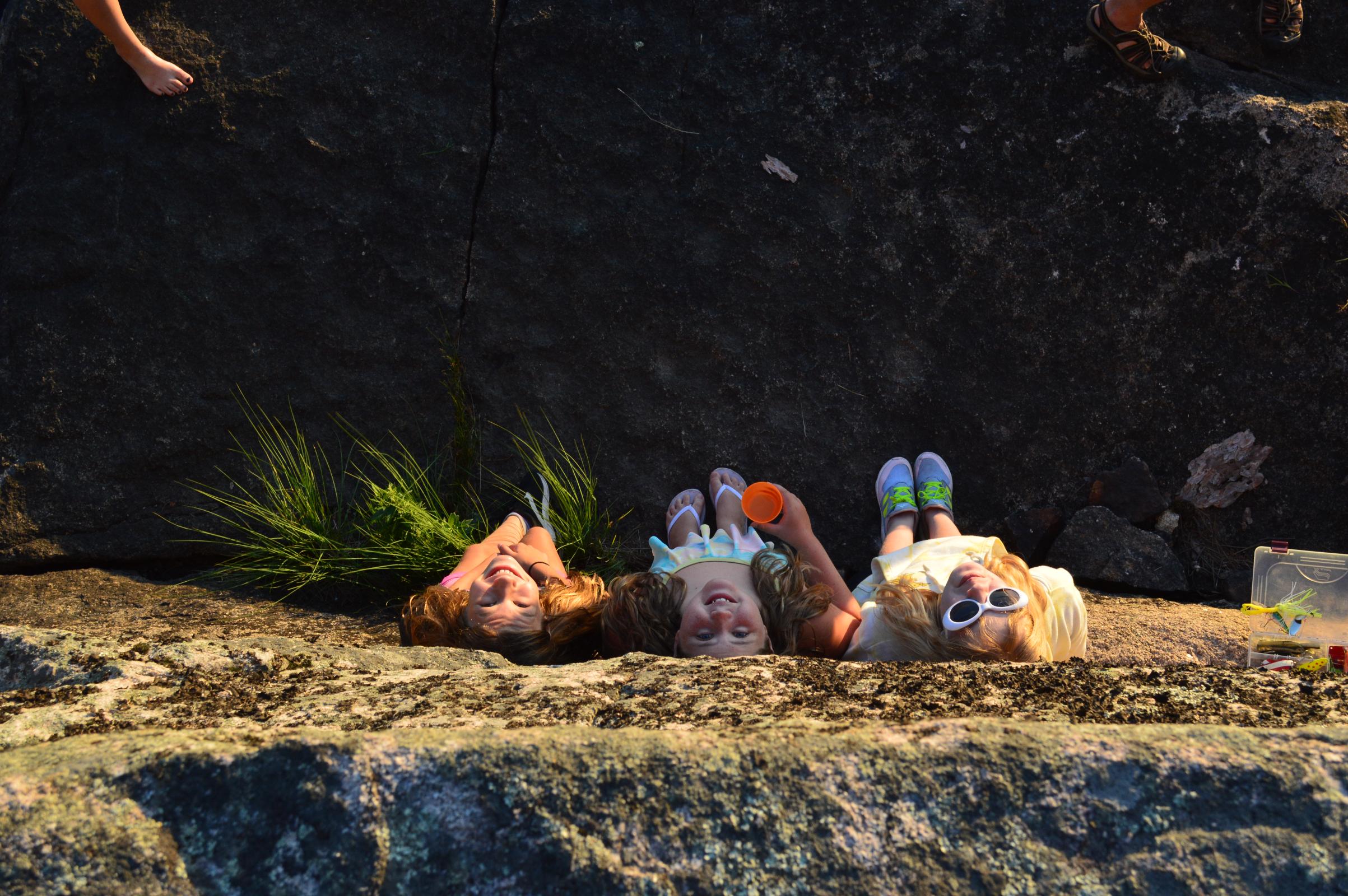 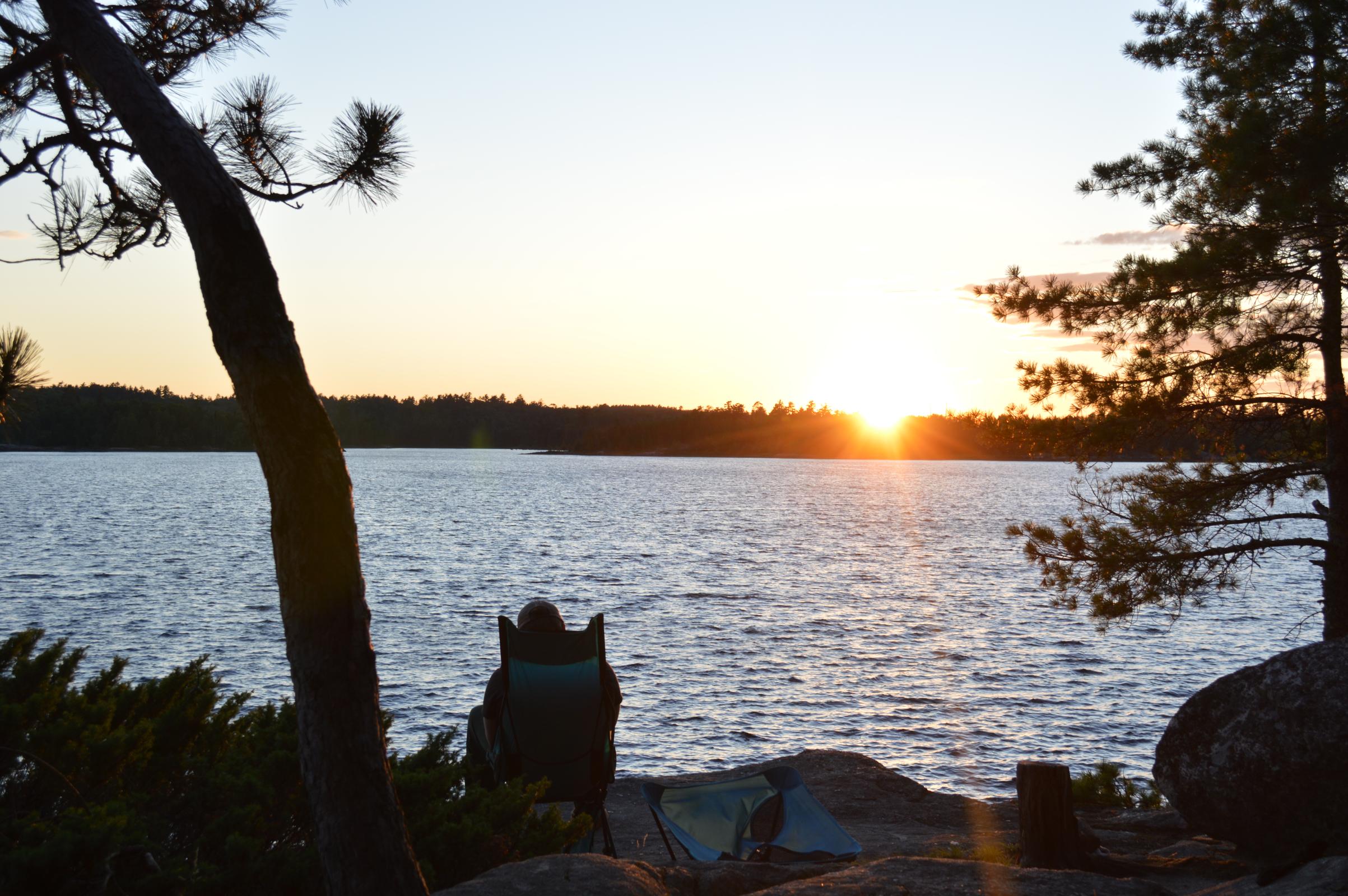 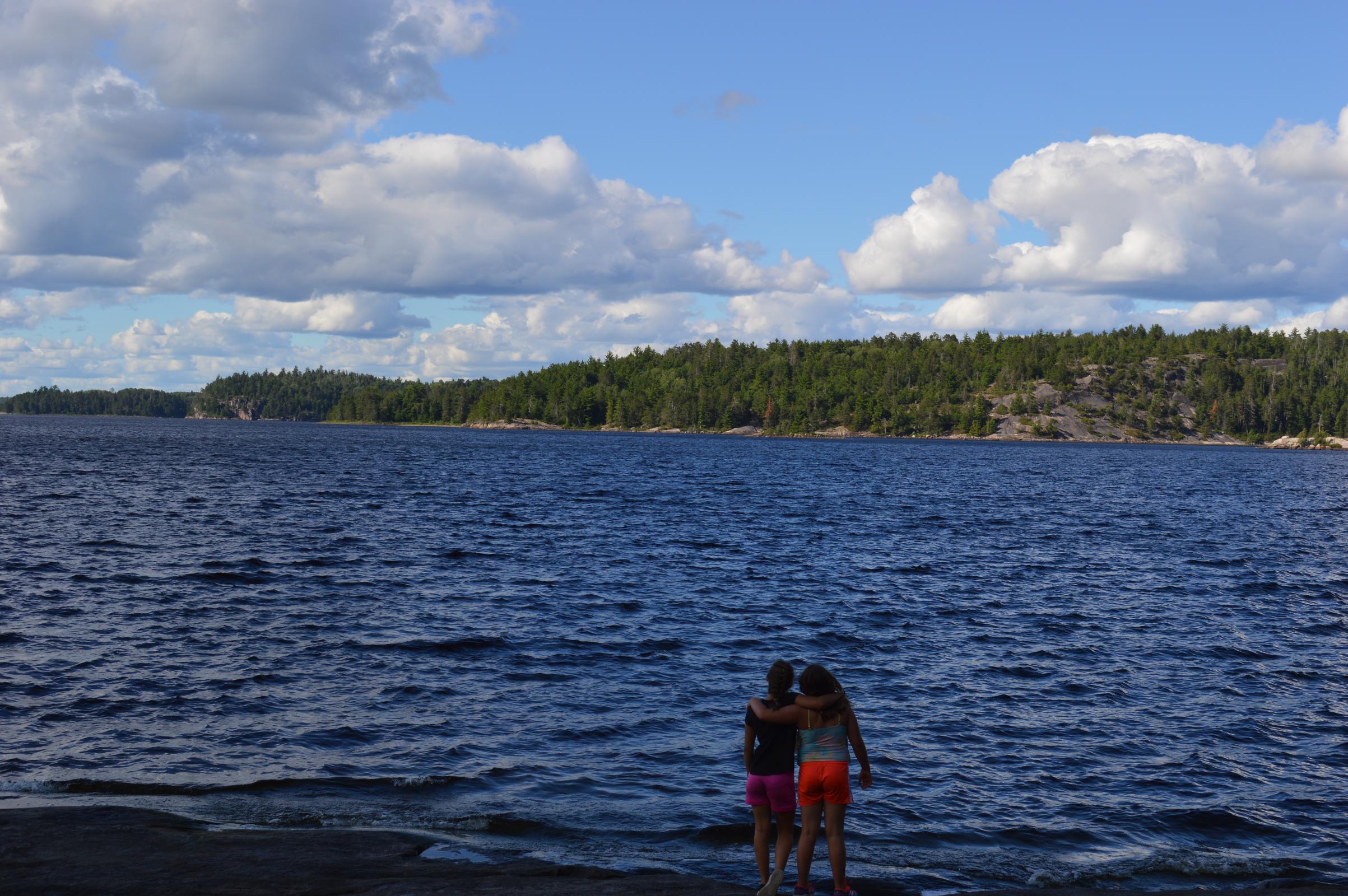 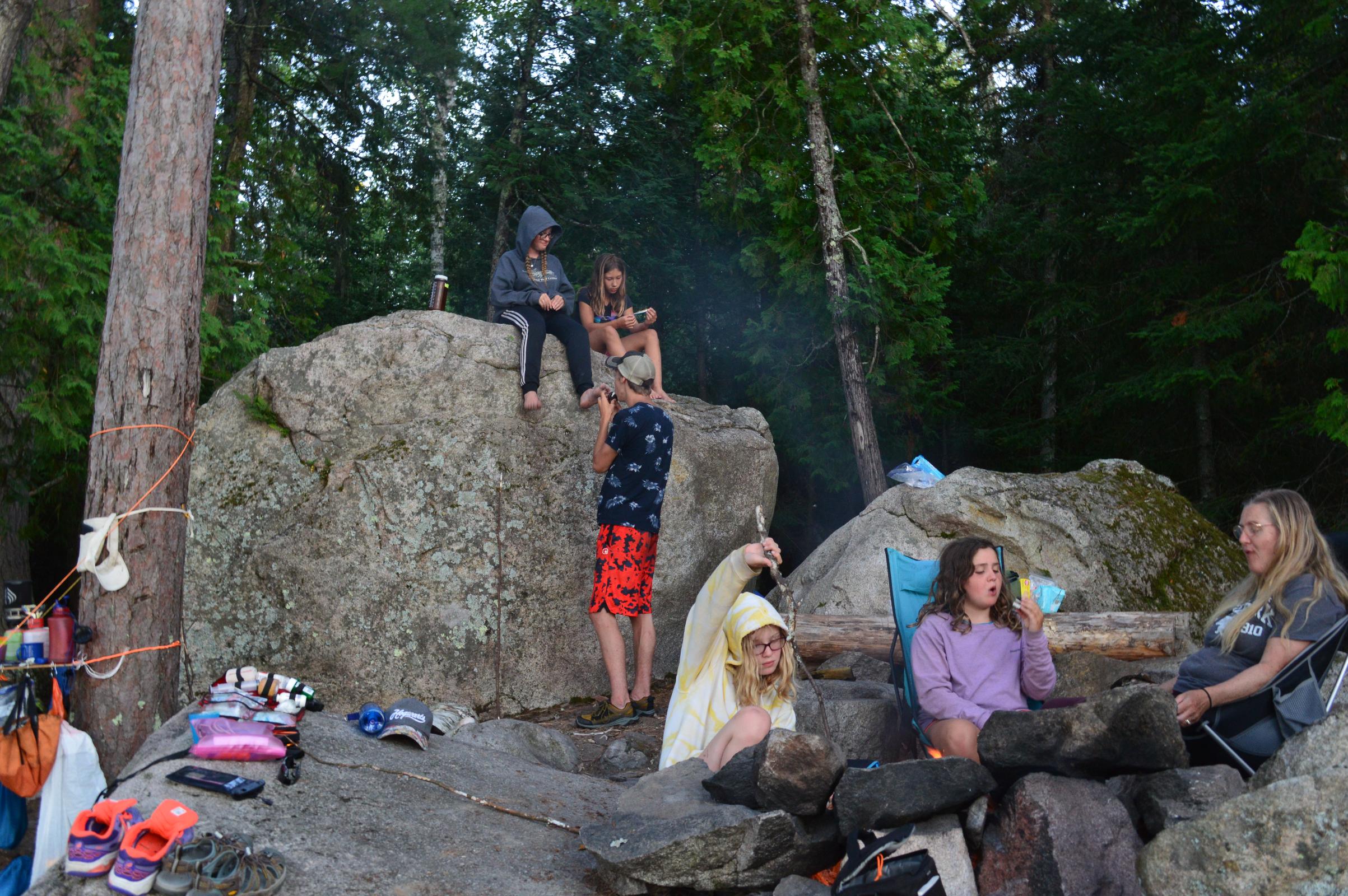 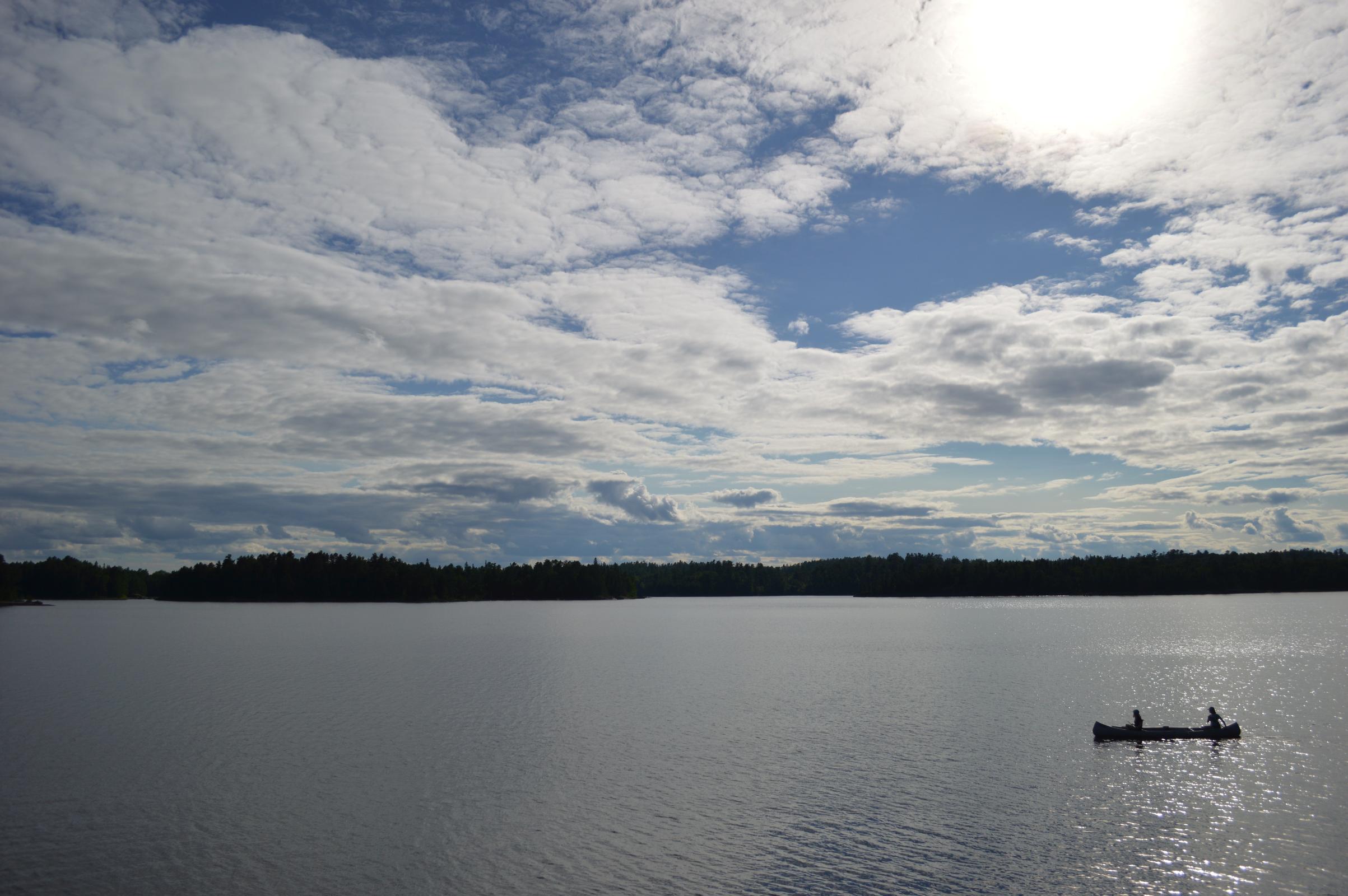