Trip Type: Paddling Canoe
Entry Date: 08/13/2020
Entry & Exit Point: Sawbill Lake (EP 38)
Number of Days: 10
Group Size: 2
Trip Introduction:
This was our 5th trip in the BW, and our 3rd trip over a week in length. We love the smaller lakes and rivers, so settled on the area around Sawbill. We didn't have a set itinerary -- in fact didn't even know which direction we were headed until the morning we left. Most days we just followed our noses (and hearts). The 9 nights of the trip were spent at: Hazel, Malberg, Boulder (looping from Malberg through Beaver/Smite/Adams, Malberg (from Boulder through Ledge/Makwa), Trail, Wine, Afton, Frost, and Sawbill.
Discuss Trip: View Discussion Thread (9 messages)
Day 1 of 10
Thursday, August 13, 2020 Sawbill to Hazel

****************************** The Day before: We arrived at Sawbill after flying to MSP from our home in Durham, NC and renting a car for the drive. Once there we asked to speak with a guide about possible routes. Of course, we had been researching the area, and already had Voyageur and McKenzie maps. Paul -- the ‘legend’ as he was introduced by another employee at Sawbill Outfitters -- was a very experienced paddler, having done several multi-week solo trips in the area. He spent maybe an hour answering all of our questions, and most importantly, was encouraging about doing the Louse and Frost rivers.

They allow night-before pickup, so we got our canoe after 7pm (from friendly, easygoing Johnny, who answered more of our questions) and moved it down to the water, then spent the night in the campground. We still didn’t know which way we would go in the morning. **********************

Seeing the possibility of a little rain on Friday/Saturday, we decided to go up the Lady Chain, which would leave many options open for those days. We were a little bit apprehensive about all of the portages in this area, knowing that we would be spending a much higher amount of our time portaging than paddling, compared to our other trips.

We didn’t get a chance to weigh our backpacks just before leaving, but estimate they were about 45lbs and 35lbs for mine and Libby’s. Given that we like to do single portages, we wondered what it would feel like, especially at the start when we had all of our food. I carry the pack and canoe, while Libby looks like a vagabond with her pack and all the other gear -- life vests held by paddles, large lure box and gooey fish gloves held in the landing net, map bags and my huge, ridiculous hat dangling from a carabiner on the back of her pack. Not to mention the fishing rod, which would regularly get snagged on branches during the portage (late in the trip -- after I carried the rod and realized what a pain it was -- we realized how easy it was to tie the rod into the canoe).

The first few portages were relatively easy -- flat and smooth -- and our packs felt good. In fact mine felt infinitely better than in previous years, when I carried the blue pack Libby had this year. This pack has a very high profile, and it was incredibly uncomfortable to try to cram the top of it into the canoe between the yoke and my neck. The pack I used this year -- unbelievably, the same one Libby carried last year -- held the canoe beautifully on my shoulders. We like these conventional internal-frame backpacking packs better than the Duluth packs more often used. They are more comfortable and put more of the weight on our hips. 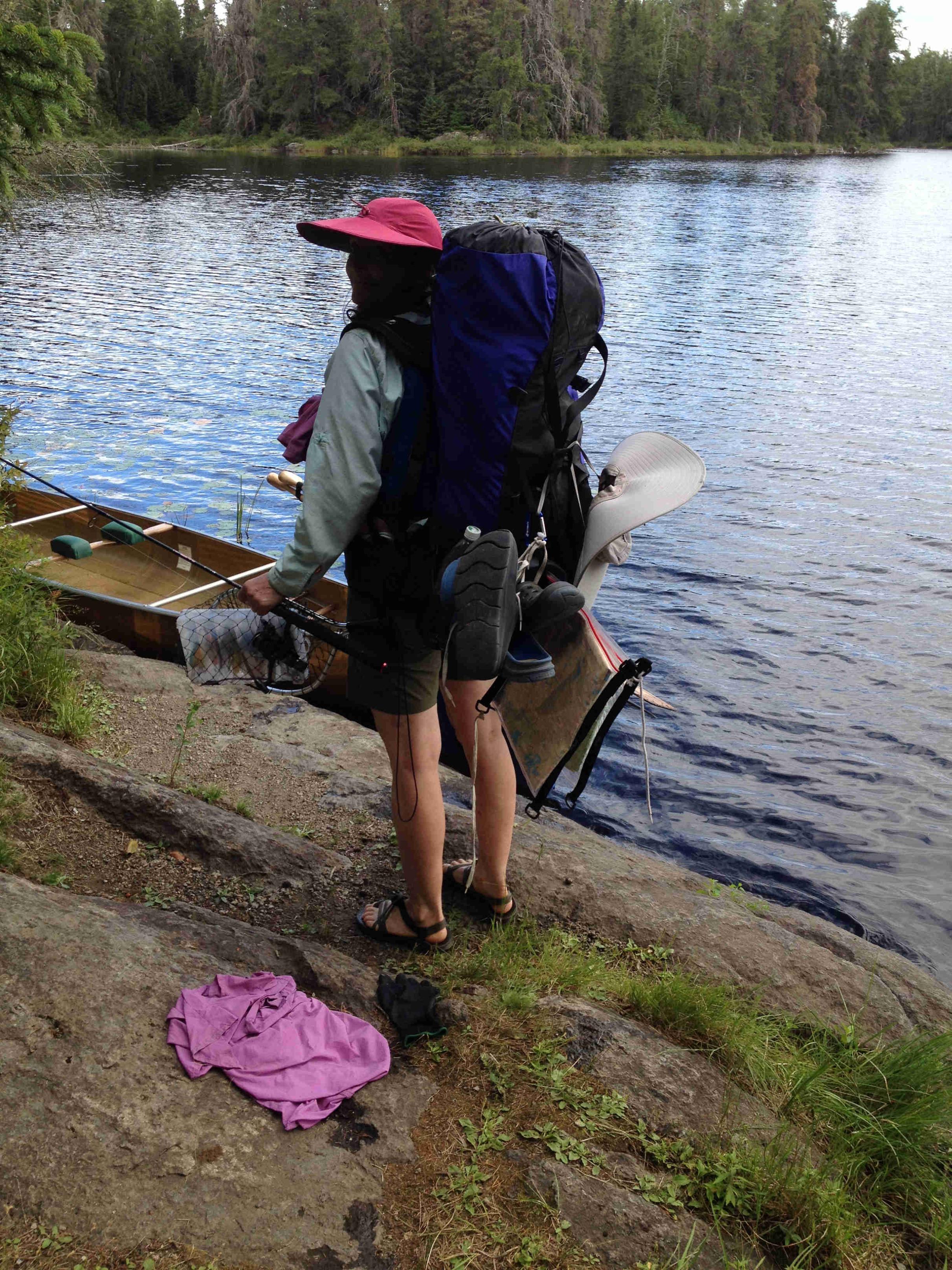 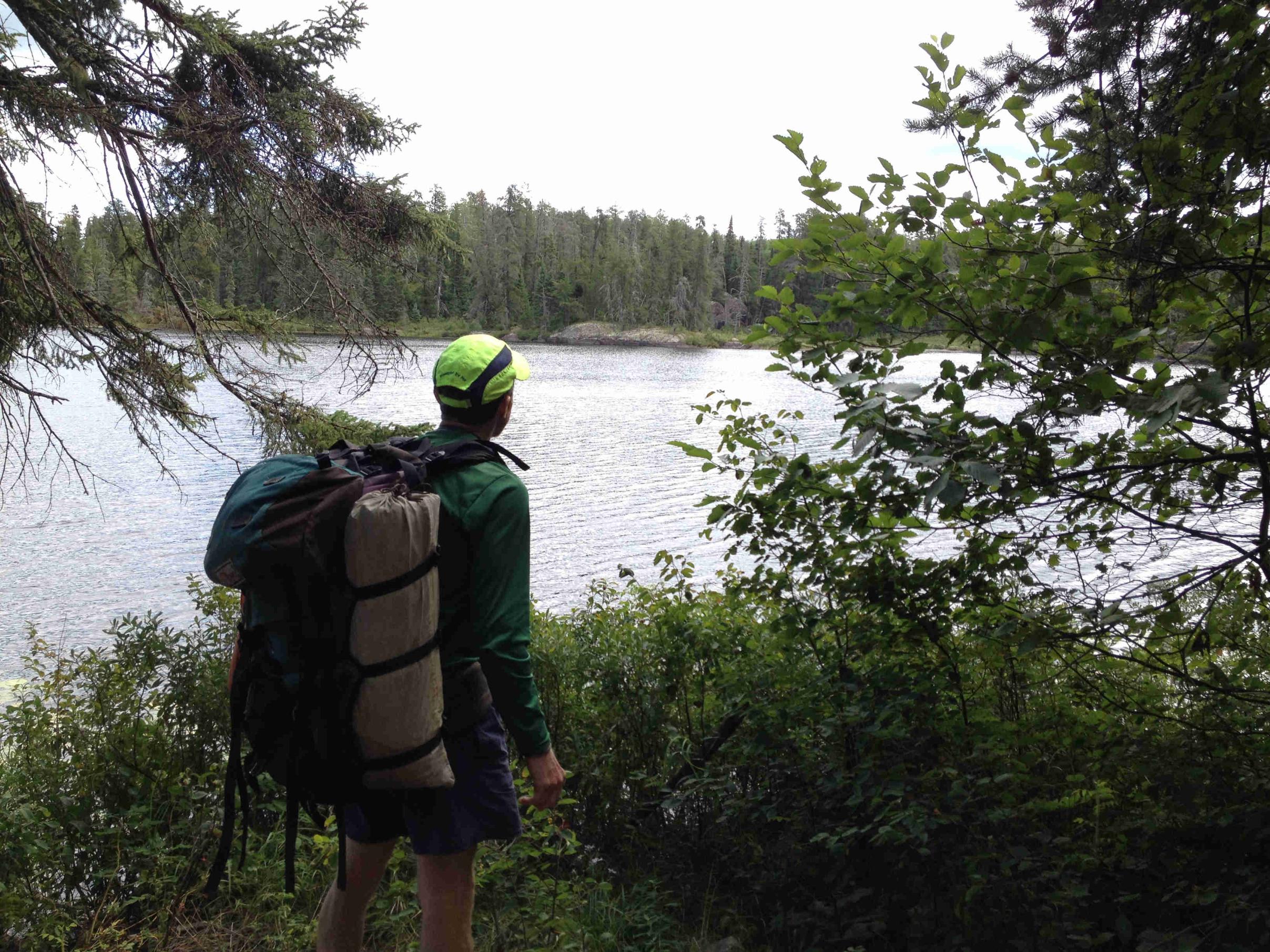 The Phoebe River gave us a nice preview of the kind of beauty we would encounter on the river sections of this trip, as it wound through narrow paths of lily pads and wildflowers. Libby spotted patches of carnivorous plants (pitcher plants and sundews) in full bloom in the floating bogs, their bases filled with trapped insects, from which the plants extract nitrogen. 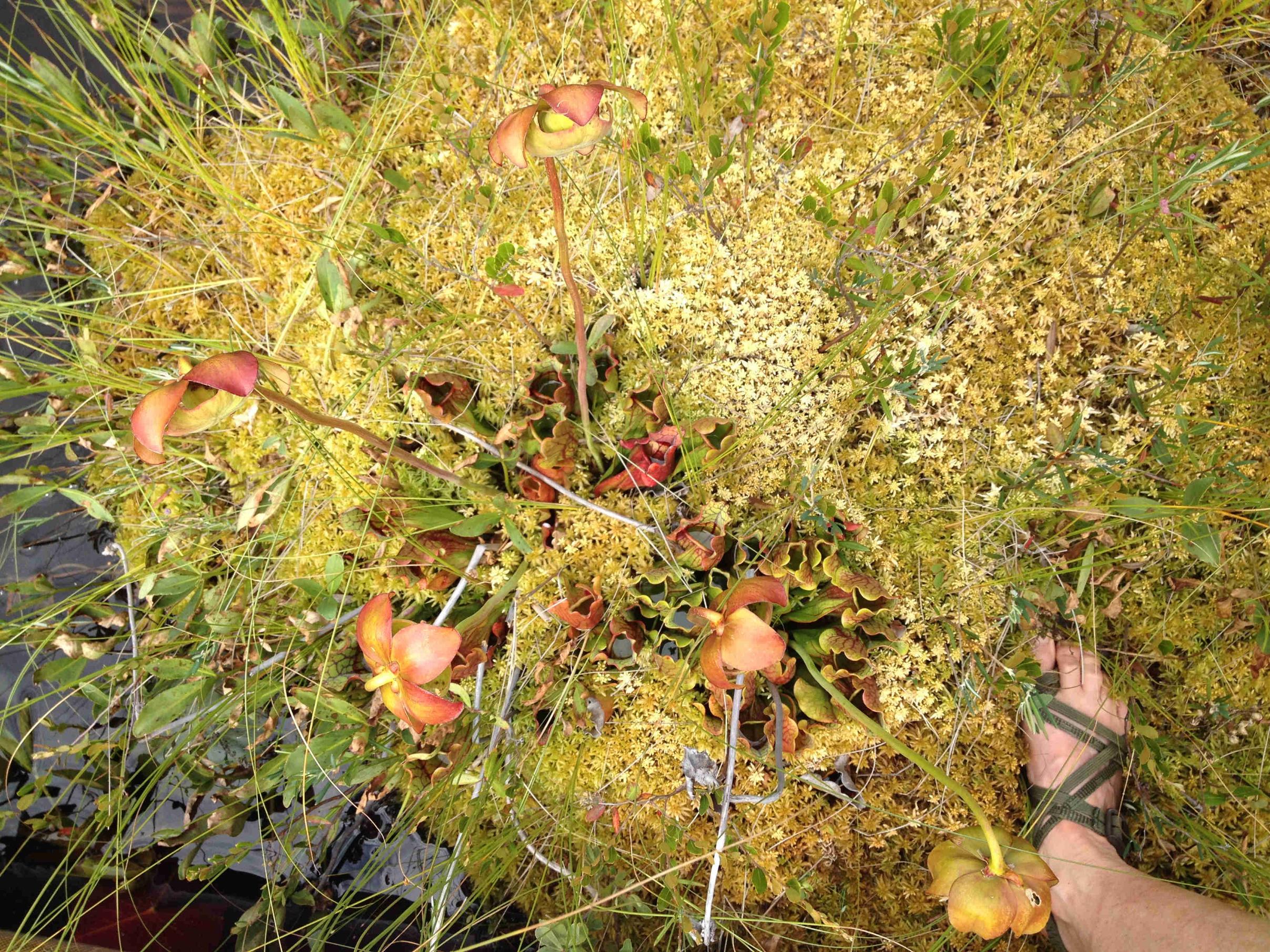 A surprisingly large bass went for a Whopper Plopper (bone, or yellow color) as we trolled up the Phoebe River into Knight Lake. I decided to try the Zulu rig I had learned about from Quetico Mike on this forum, and no sooner had I cast it out than another nice bass was hooked. Dinner was already covered by the first fish, so the second was released. Of note was the loss of a Heddon Lucky 13 lure I had purchased at Mike’s suggestion -- hit a snag in some shallow water, broke the line, and though we went back to look, couldn’t find it. Was looking forward to seeing how it would do. Fortunately, there were plenty of lures left in the tackle box. 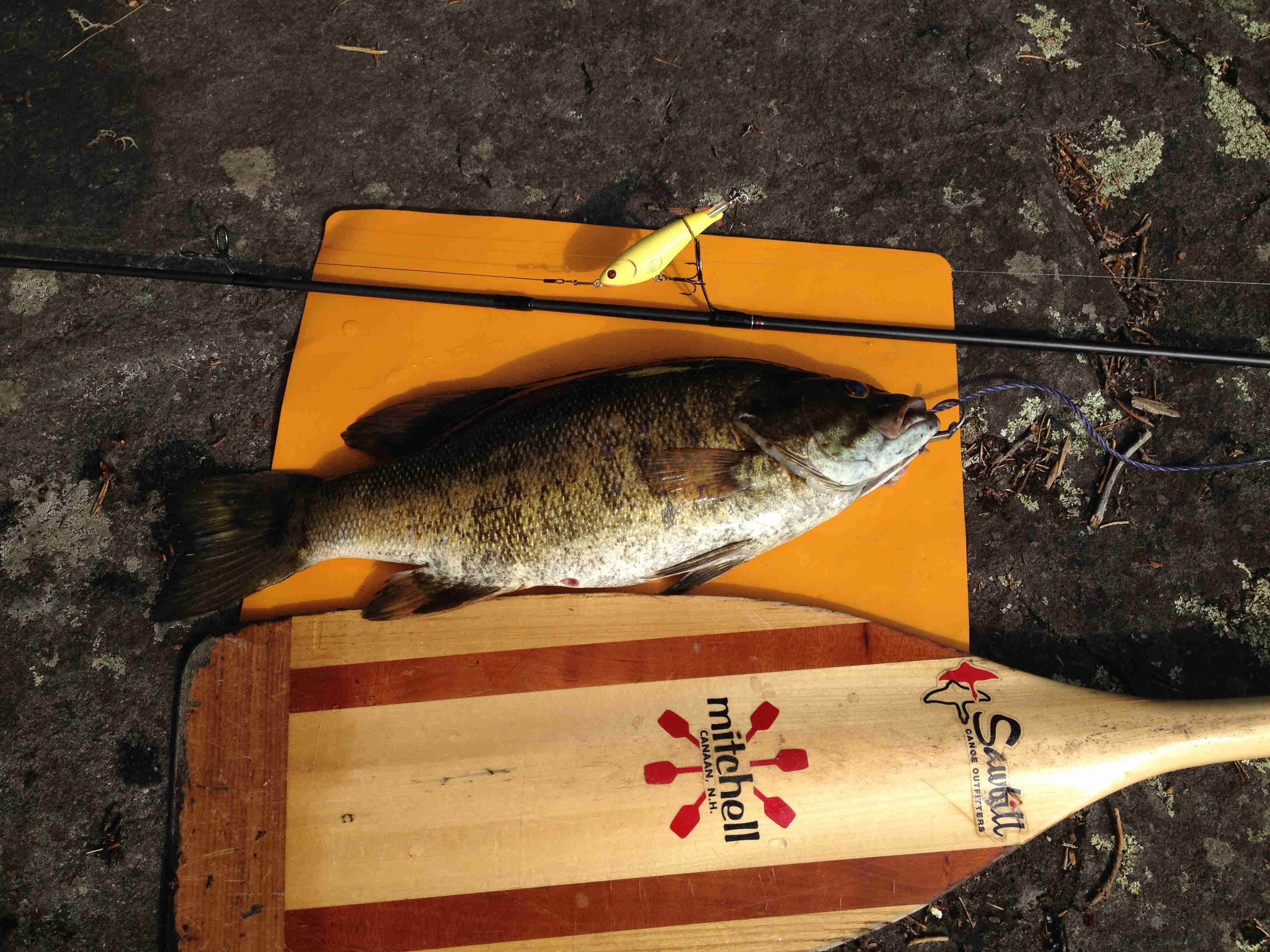 We decided to stop for the night at the east campsite on Hazel, and had the lake to ourselves. The evening’s entertainment was ably provided by a very large snapping turtle. As I was cleaning the bass, I said to Libby “I think we have company”, noticing the tip of its nose peeking out of the water as it sniffed its way toward the fish, knife, and cutting board. We put the fish parts on a rock just in the water, and this friendly creature scootched up to grab, rip and swallow them until they were no more. We enjoyed this real-life documentary for close to an hour. 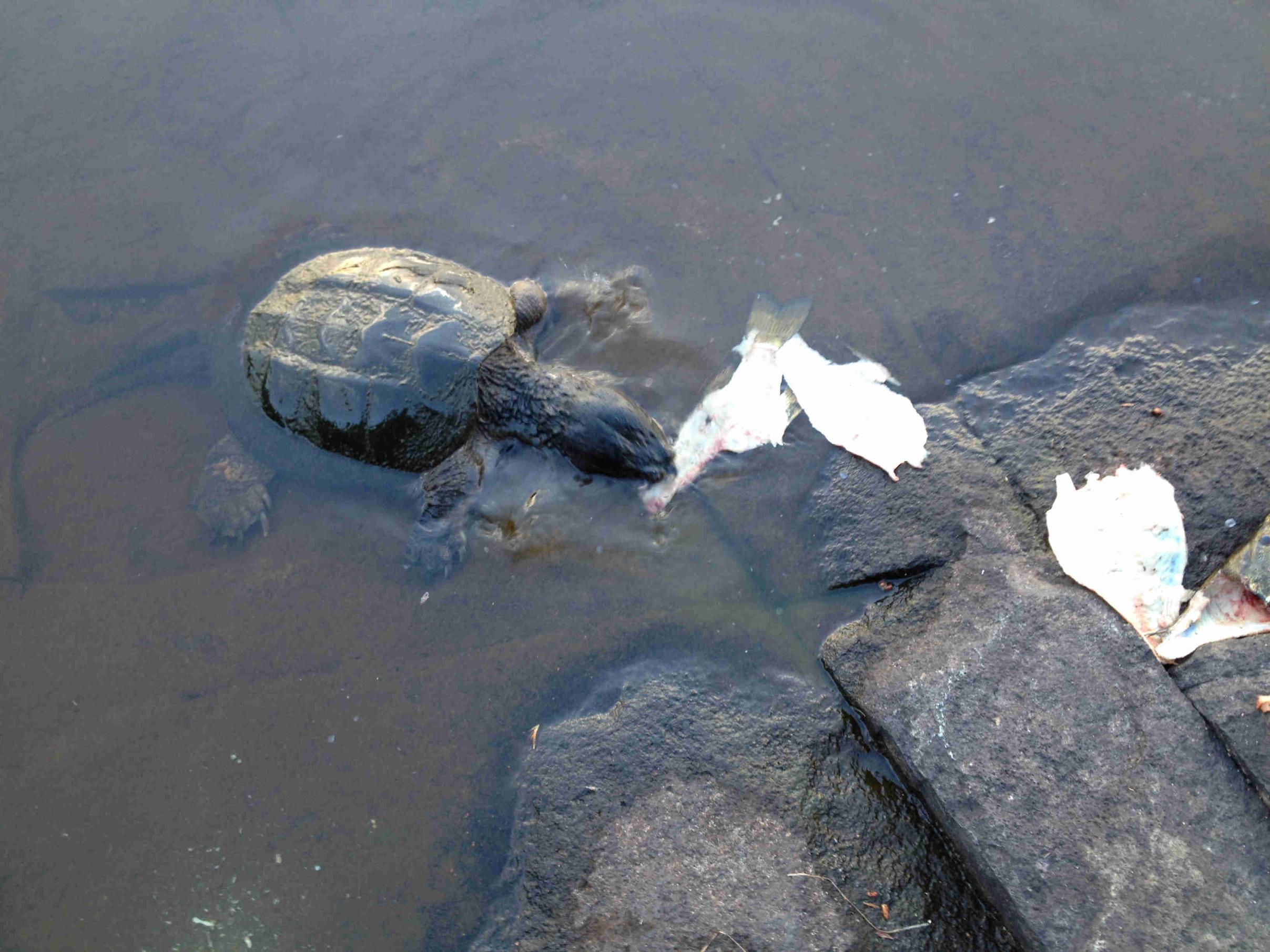 We awoke to the sound of powerful thunderstorms in the distance, but got only a light rain at our site, and the sky was clear by the time we got up at 7.