The trouble with beavers - Father and Son first trip
by AceAceAce

We got going earlier this morning, but still not early enough. The goal for the day was to make it to Kekakabic then we’d rest there a day. We had a lot of water and many portages to cover today. As we went into Trader we saw a group ahead of us headed toward Missionary, so we decided to walk back into Neglige and check it out. We didn’t take the canoe or gear just walked it with the fishing poles. The portage is an interesting one. I’d take gear back there, but only if staying a couple days. It is tight and twisty with some steep rock faces to deal with. Nothing unpassable but a challenge. I fished from shore for a few minutes with no luck then we walked back. That is a lake I’m hoping to get back to someday to stay a while. 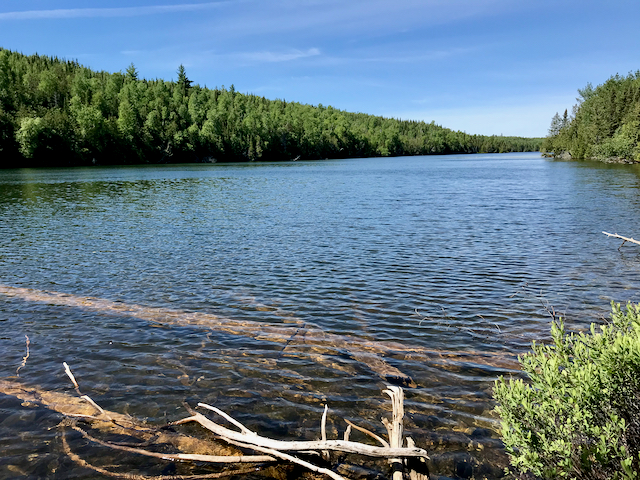 Moving on to Missionary, we fished for lake trout here. The wind was once again not our friend and made it difficult. We spent way too much time and lost way too much tackle on this lake with zero luck. By the time we moved on it was early-afternoon already.
The portage into Skoota was the most challenging portage so far. Again very passable, just longer and narrower than we’d dealt with so far. We ran into an older couple on the portage and the brief chat with them turned out to be our last conversation with anyone but ourselves for the next couple days. Skoota was the first lake we’d not seen anyone else on. It is a gem of a lake with lots of islands. We trolled spoons for pike around the islands on the south shore and caught half a dozen nice pike in the 26”-29” range. They were a lot of fun. At this point the wind was getting serious. It was becoming a real challenge for our inexperienced selves to deal with. We debated on holding up here or on Dix for the night but really wanted a rest day tomorrow so decided to push to Kekakabic. We stopped to scarf down some food before paddling straight through Dix and into Spoon. I was very worried about what Kek would look like coming in on the north shore with these strong south winds. 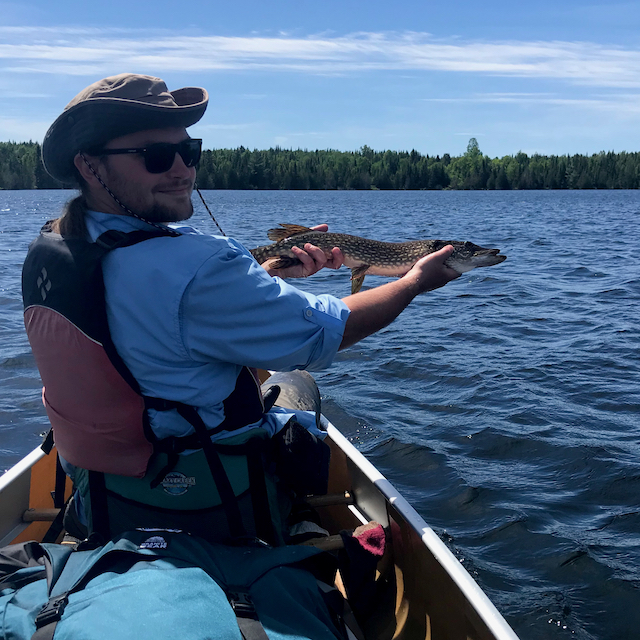 Spoon was another lake I’d have liked to spend more time on, but as it turned out we’d paddle it’s length tomorrow. The portage to Pickle is short and steep. The landing is easy to miss. Just listen for the moving water. The winds we’d been fighting all afternoon were whipping even little pickle lake into a bit more than I was comfortable paddling. Since we were headed straight into it and the distance was short we went ahead. Soon enough we were out of the worst of the waves with no issue. By this point it was getting late, at least 4PM. I’d been keeping an eye out for and noting empty campsites in case Kek was what I was expecting it to be. Several sites were open and the area was generally pretty open. Coming into Pickle we could see the site just west of the portage to Kek was open as well. We unloaded at the portage and foolishly grabbed the heavy load first. We walked the portage and laid eyes on Kek. The wind was hard out of the south at this point. I took one look at the lake and knew I wasn’t going to paddle it. The waves were rolling white caps at least a foot and half high. Maybe with more skill and maybe if we hadn’t been worn out, but as it was it was a no go.
We back tracked and headed for the open site on Pickle by the portage. It turned out it was open for a reason. The site is up on a large rock outcropping. It makes for great view, but not much for good tent pads. The latrine was overgrown with wild roses. Pretty but the thorns were no fun. Anyway it was late enough now that this was home for the evening. We got camp set up but had no desire to go find wood, so the steaks became steak bites cooked over the stove instead of steaks over the fire. Diner hit the spot and we both turned in early.
~Vera Lake, Trader Lake, Neglige Lake, Missionary Lake, Skoota Lake, Dix Lake, Spoon Lake, Pickle Lake, Kekekabic Lake, Pickle Lake